How Newspapers Were Made in the 70's 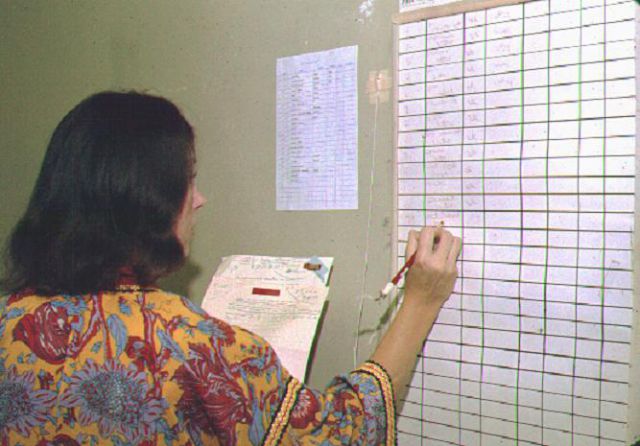 When an edited story arrives in the typesetting room, a typesetter logs it in, noting essential details. 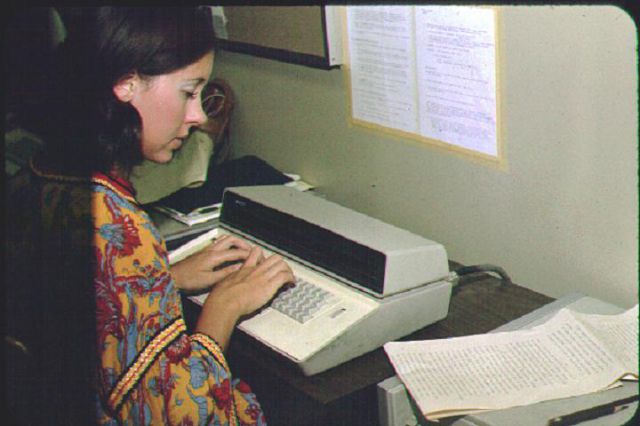 Then the story is typed on a Friden Tape Punch keyboard. The typist must type "blind:" there is no video display. The machine perforates paper tape, making one to six holes in the tape for each letter typed. A typist can correct errors only by striking a key to delete the last letter typed (the machine then punches all six holes, a code that means the previous letter is to be ignored). Typesetters who could produce clean copy on this system were miracle workers! 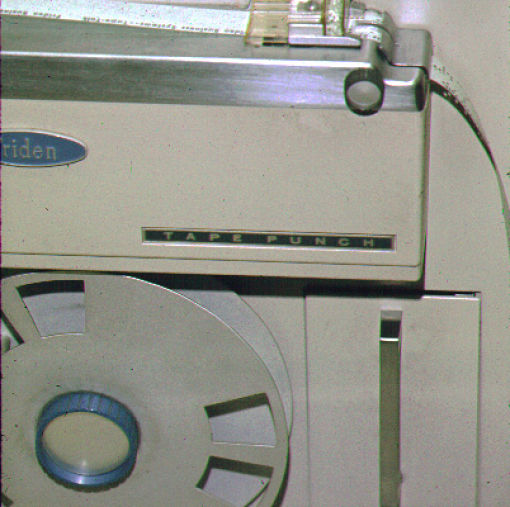 This is the heart of the Friden tape punch system. 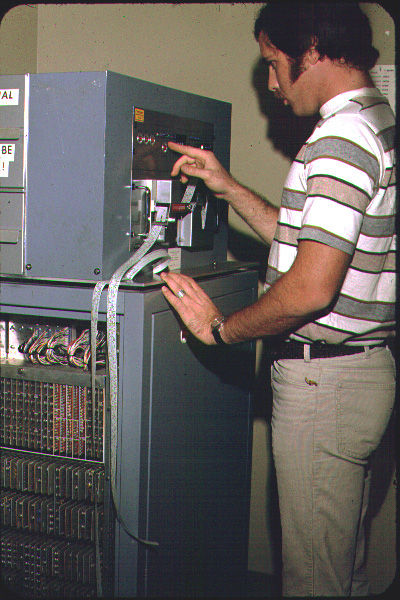 Next, a typesetting machine operator runs the tape through a Compugraphic 2961 phototypesetter, which reads the tape and uses a strobe behind a rotating film strip (one size, one type style per film strip) to expose light-sensitive paper. A nice single-family home near the campus could be purchased for the price of three Compugraphic 2961s--and this was a very low-end typesetting machine. 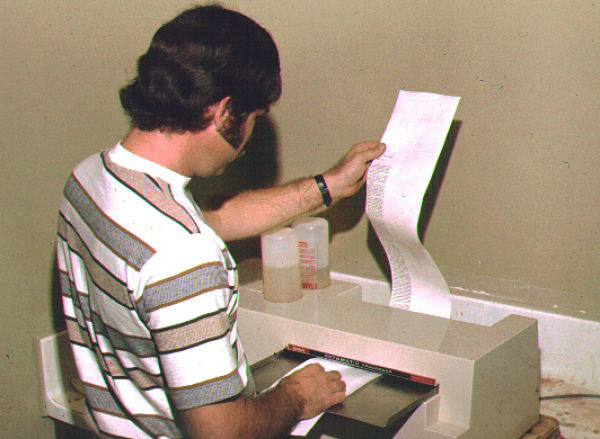 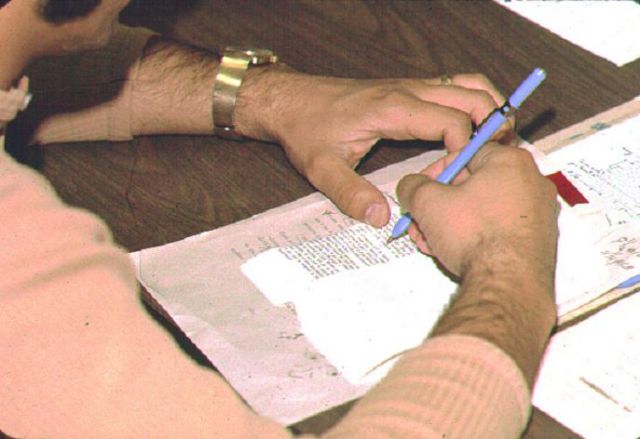 The galleys are then proofread against the original copy... 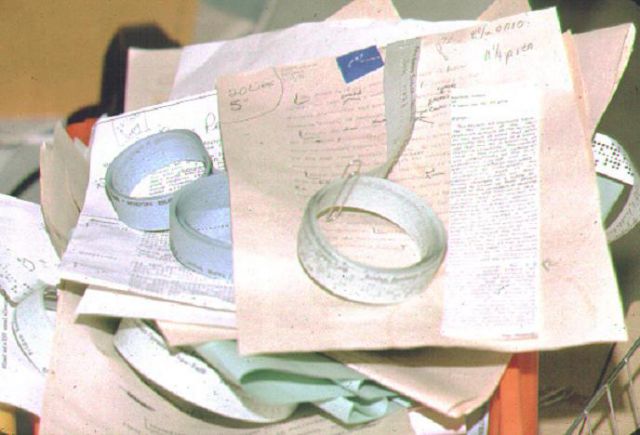 ...and corrections pile up, awaiting the typesetter. 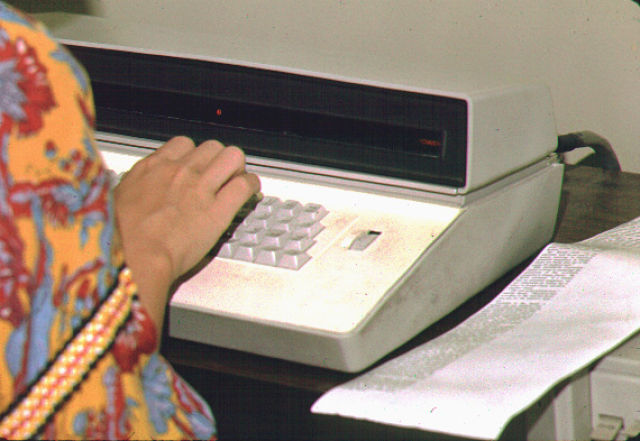 The typesetter retypes the lines or paragraphs containing errors. 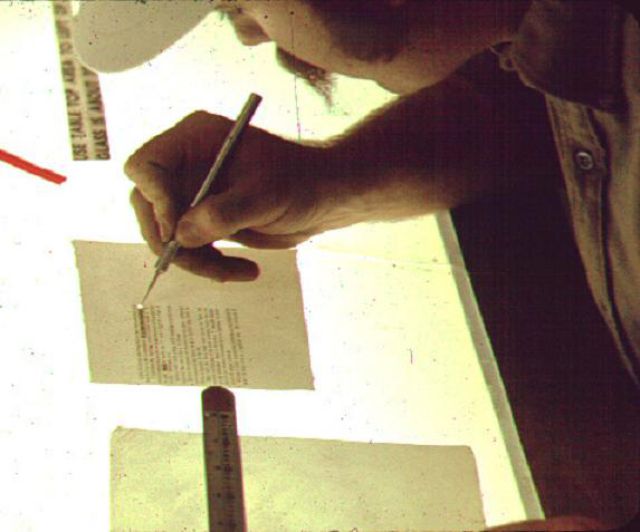 The corrections are pasted into the story with an X-Acto knife. 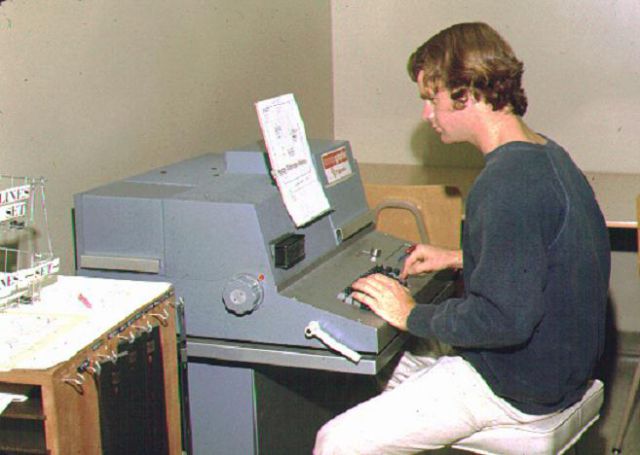 Then, the managing editor types the headlines on a Compugraphic 7200 headline machine.  It, too, used a type font on film behind a strobe to expose photo paper. The strips of photo paper, which were about an inch wide and could be six feet long or more, were developed in the chemical processing machine (unless they got tangled up along the way). 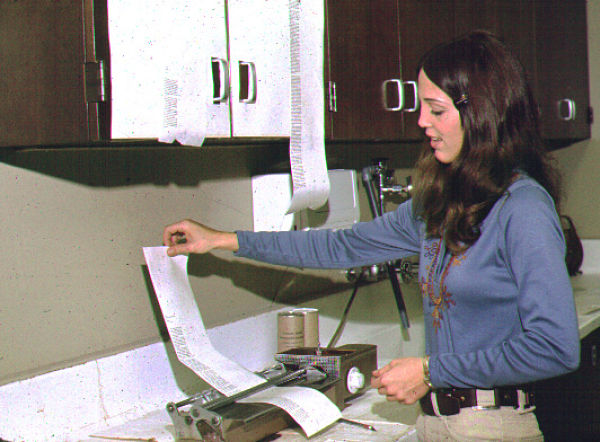 After that, the typeset galley is run through the venerable wax machine. 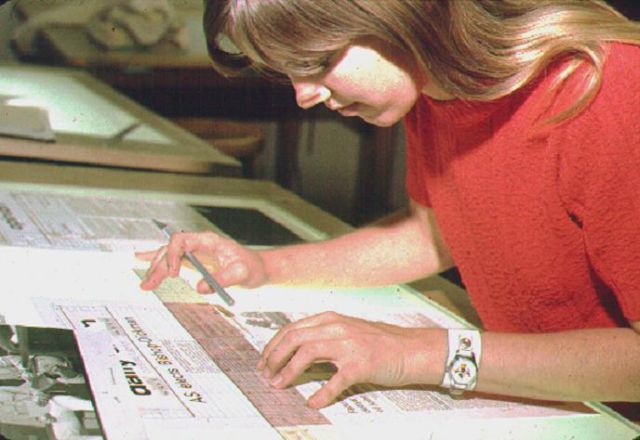 Finally, the tedious paste-up process starts. Placing each story, headline or pre-scanned photograph on the page as specified on the page dummy. Every element must be perfectly straightand spaced properly. Today, all of this (and everything else shown in these photos) can be done easily and quickly with desktop publishing software and an inexpensive home computer. Tthis process is primitive by today's standards. Many campus newspapers have been fully paginated (produced entirely by computer with no paste-up) since the late 1980s.

Hamza 9 year s ago
O GOD... we thank you for creating the computer...
Reply
0

Skier 8 month s ago
Do you have any other compugraphic photos? I ran a small newspaper for about 30 years and am, in my very OLD age, trying to put together a history. We, of course, relied on these machines. I took 1000s of photos... none were in office
Reply
How to comment