These actors all suffered acting related injuries on their film sets and these moments actually made it into the final cut.

Fred Astaire – Follow the Fleet
In the 1936 musical Follow the Fleet, Astaire and Rogers performed “Let’s Face the Music and Dance” in one long three-minute shot. Rogers was wearing a very heavily beaded dress for the number and Astaire recalls, “I got the flying sleeve smack on the jaw and partly in the eye. I kept on dancing, although somewhat maimed.” Astaire completed the number in a daze (which you can sort of tell by his drooping head) all the while, “ducking and dodging that sleeve.” And after 20 more undazed takes, everyone decided the first one was the best. So Astaire’s injury made it into the final film, sleeve whip and all.
1 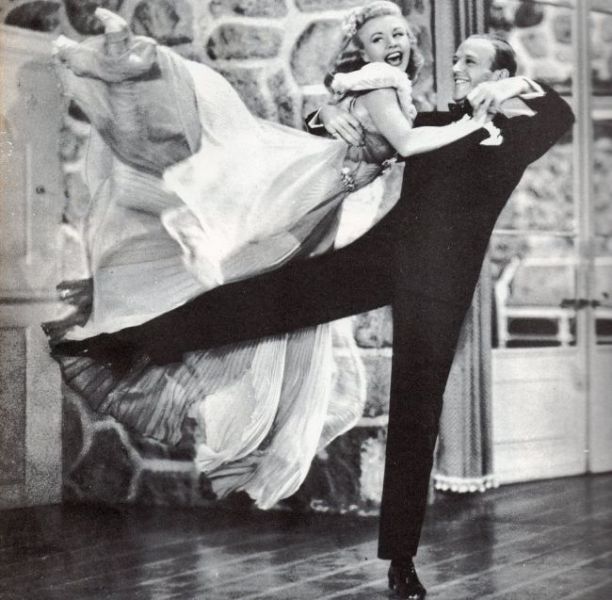 Channing Tatum – Foxcatcher
In the much-buzzed-about new film Foxcatcher, Channing Tatum’s character has a hotel-room breakdown. Despite precautions on the set and a plastic sleeve on the mirror, Tatum injured the mirror, the wall behind the mirror, and himself. Director Bennett Miller said, “He punched that thing with his head three times and shattered it, and put his head through it and through the frame behind the mirror and through the drywall that the mirror was hanging on and left a divot two inches deep. When we took the mirror down, there was a hole in the wall. And he actually cut himself, and you see his blood in that scene.”
2

Viggo Mortensen – Lord of the Rings: The Two Towers
After four takes of kicking a helmet towards the camera, Viggo Mortensen finally went for broke on the fifth. Quite literally. Director Peter Jackson recalls, “Then he let out this scream. I thought wow, this is strong . . . He didn’t say anything to us, but we found out that Viggo had actually broken two toes with that last kick. Normally an actor would say, ‘Cut! Get the medic!’ . . .Viggo feeling that pain, he actually turned it into performance . . . Of course it was the best take so it’s actually in the movie.”Orlando Bloom would like you to know he broke his ribs as well.
3

Jake Gyllenhaal – Nightcrawler
In his latest film Nightcrawler, Gyllenhaal’s high-strung character vents his frustration on his bathroom mirror. [Gyllenhaal was hospitalized after, as he put it, “A mirror broke in the middle of a scene that I was shooting. I hit a mirror and it broke and it cut my hand.” That description is rather low-key, but Gyllenhaal, despite being pretty badly injured, stayed in character while the camera was rolling. If you pay attention, you can catch Gyllenhaal hiding his injured hand behind his back during other scenes in the movie.
4

Leonardo DiCaprio – Django Unchained
During one of his character’s many emotional outbursts, Leonardo DiCaprio accidentally crushed a glass with his hand during a scene. Producer Stacey Sher recalls, “Leo had slammed his hand on the table countless times and he moved his hand further and he crushed a crystal cordial glass. Blood was dripping down his hand. He never broke character. He kept going. He was in such a zone. It was very intense. He required stitches.” You can see DiCaprio casually picking some glass out of his palm during the intense scene.
5

Brad Pitt – Se7en
Brad Pitt’s on-set injury in Se7en was so severe it had to be worked into the script. During a tumultuous chase in the rain, Pitt put his arm through a window, severing a tendon in his hand. Producer Arnold Kopelson recalls, “I’m not going to tell you what I said. Some expletive . . . He wasn’t supposed to break his arm, but that’s what we’ve done. We worked his injury into the story line.”
6 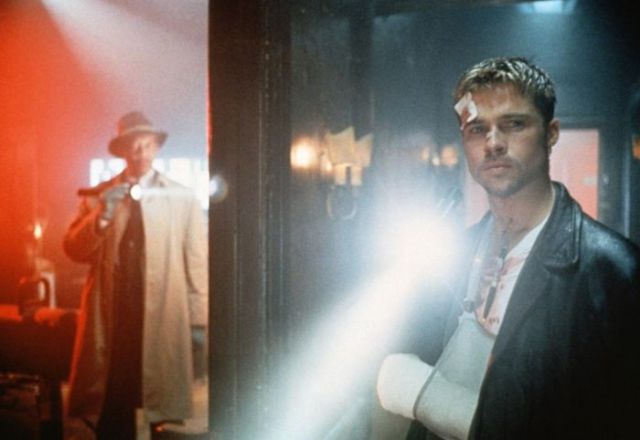 Halle Berry – Gothika
During a struggle between Robert Downey Jr. and Halle Berry in the psychological thriller Gothika, Downey Jr. restrained Berry a little too vigorously. According to Berry, “Robert Downey twisted my arm and it broke. It was a freak accident but we’re good friends.” Downey reportedly stopped when he heard Berry’s arm pop. Shooting on Gothika was halted for eight weeks while Berry healed.
7

Margaret Hamilton – The Wizard of Oz
Margaret Hamilton, who played the Wicked Witch of the West, suffered second-degree burns on her face and hand when the trap door behind a pyrotechnic effect malfunctioned. In The Making of Wizard of Oz: Movie Magic and Studio Power in the Prime of MGM Hamilton recalls coming back to set after six weeks of recuperating. “My face was all right. I could put makeup on it. But not the hand. All the nerves in my hand were still exposed. Instead of makeup on my hands I was going to wear green gloves.” According to Hamilton, director Victor Fleming said, “Well, anyway, we have the film on your disappearance, and it was a great shot!”
8

Nicole Kidman – Moulin Rouge
Nicole Kidman defended the negative reviews of her dancing in the musical Moulin Rouge saying, “Because I broke my rib and tore the cartilage in my knee—I broke my rib before we started shooting but that was because Ewan MacGregor dropped me . . . Then we broke it two weeks later.   Well it sort of started to heal and then we thought, oh well, with the corset on, that should help it, you know, hold it in place and it actually cracked it more . . . And I stood there and I remember just, sort of, the blood draining from my face thinking, gosh this doesn’t feel right but then I didn’t call Baz [Luhrman] until that evening, and say it feels a little strange.   I think maybe I have broken it again.” Kidman had to film many of her scenes sitting down to hide the brace on her leg.
9 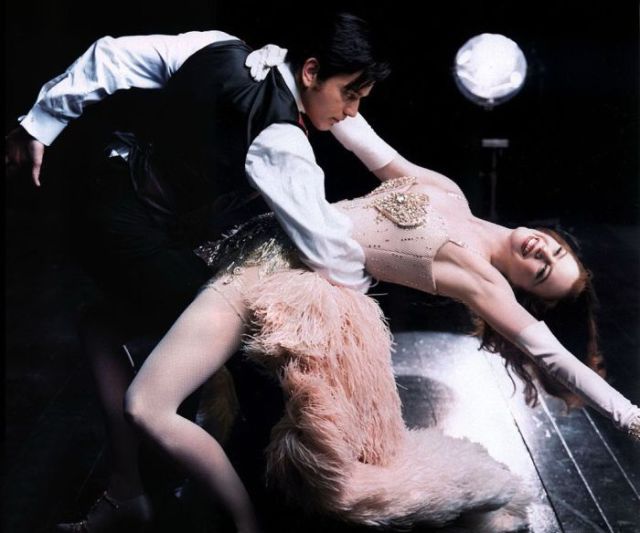 ThatOtherGuy 5 year s ago
#5 Not to mention that he even smeared his co-stars face with his own blood. The shock you see on her face is genuine.
Reply