jubyp0b 6 year s ago
I'd suggest googling something before having an opinion, instead of a fact.
Reply

This exoskeleton suit is commercially avaialble in Japan (video)

When a person attempts to move their body, nerve signals are sent from the brain to the muscles through the motor neurons, moving the musculoskeletal system. When this happens, small biosignals can be detected on the surface of the skin. The HAL suit registers these signals through a sensor attached to the skin of the wearer. Based on the signals obtained, the power unit moves the joint to support and amplify the wearer’s motion. The HAL suit possesses a cybernic control system consisting of both a user-activated “voluntary control system" named Cybernic Voluntary Control (CVC) and a “robotic autonomous control system" named Cybernic Autonomous Control (CAC)" for automatic motion support. 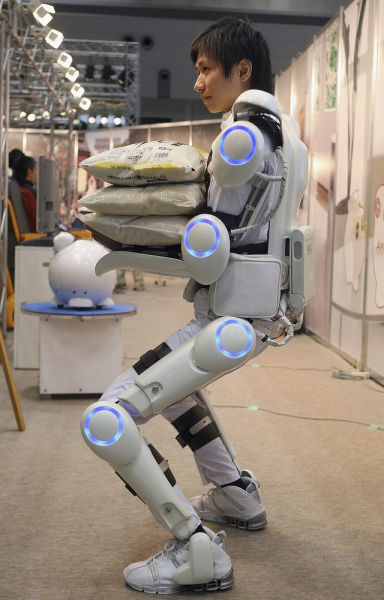 jubyp0b 6 year s ago
I'd suggest googling something before having an opinion, instead of a fact.
Reply