If You’re on the Beach, This is What’s Across the Ocean

The map above shows the countries that are due east and west from points along the coasts of North and South America. Many small island nations are (perhaps unfairly) excluded for ease of reading. 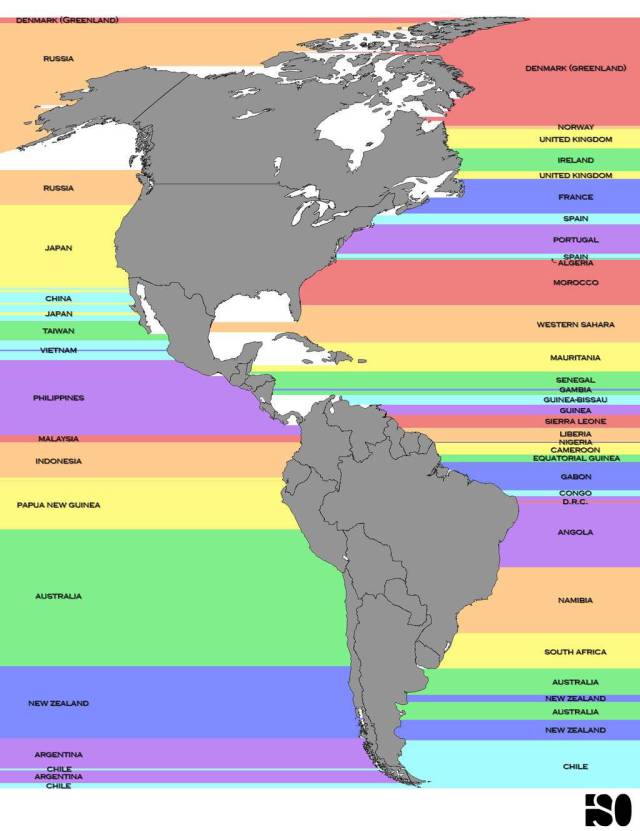 Point Nemo: The Farthest Place on Earth from Land

The oceanic pole of inaccessibility (48°52.6′S 123°23.6′W) is the place in the ocean that is farthest from land. It lies in the South Pacific Ocean, 2,688 km (1,670 mi) from the nearest lands: Ducie Island (part of the Pitcairn Islands) in the north, Motu Nui (part of the Easter Islands) in the northeast, and Maher Island (near the larger Siple Island, off the coast of Marie Byrd Land, Antarctica) in the south. Chatham Island lies farther west, and Southern Chile in the east. This location is also referred to as “Point Nemo”, a reference to Jules Verne’s Captain Nemo. 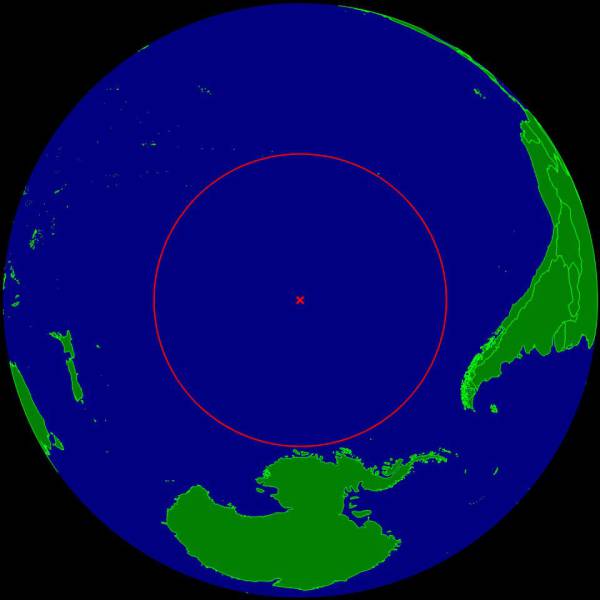 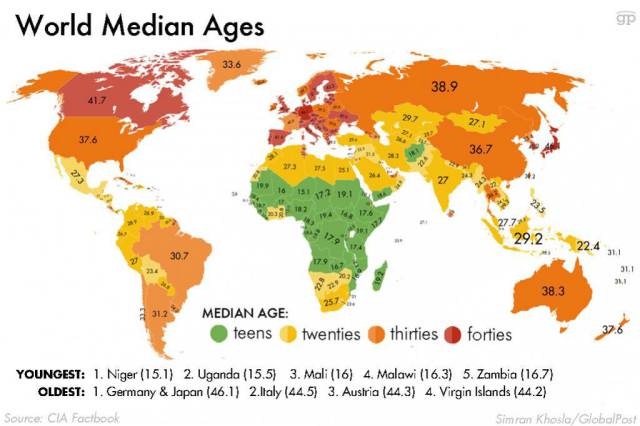 The Most Consumed Alcoholic Beverage by Country 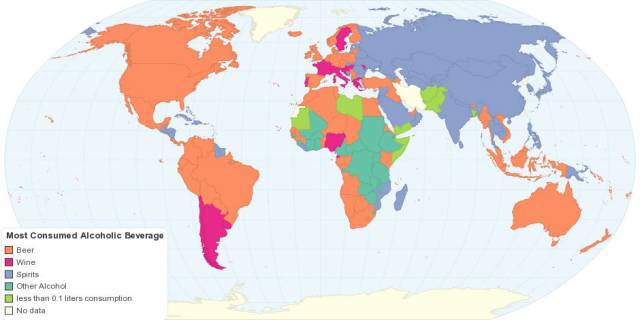 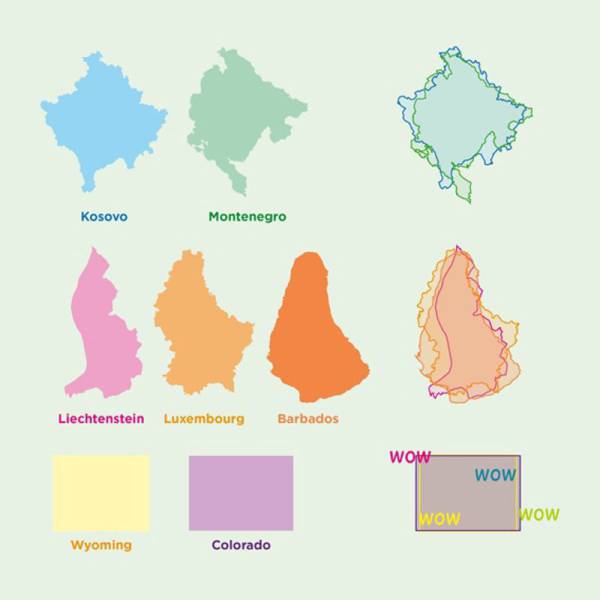 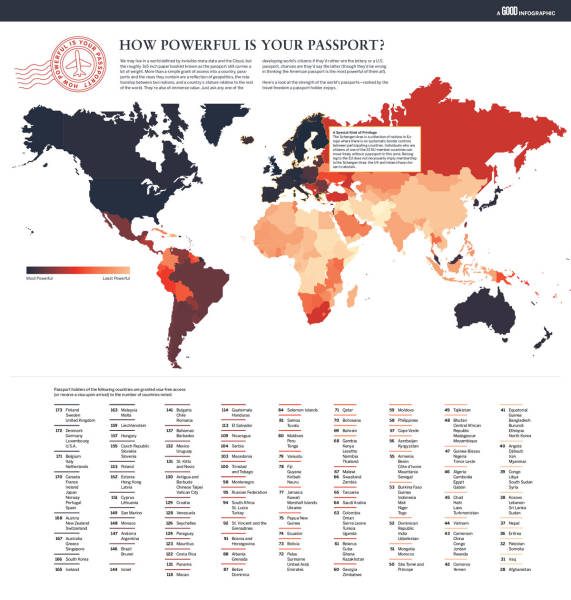 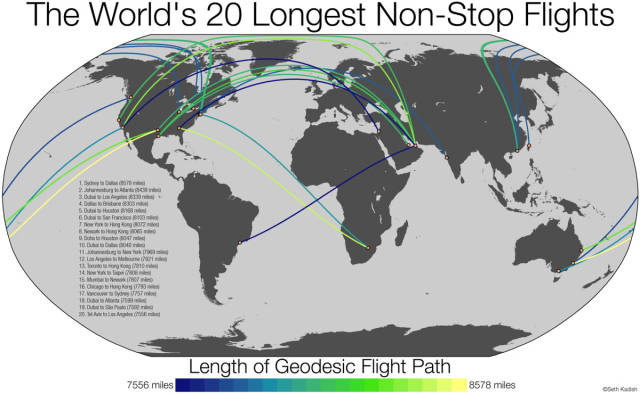 The Word for Bear in Various European Languages 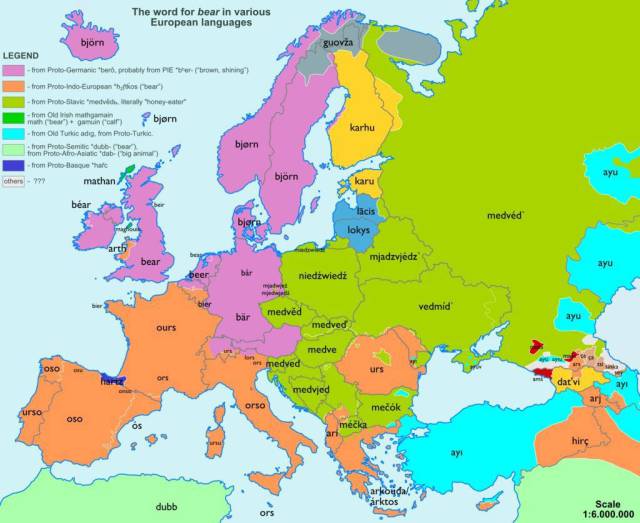 Percentage of People Having Sex Weekly by Country

Camouflages of the World 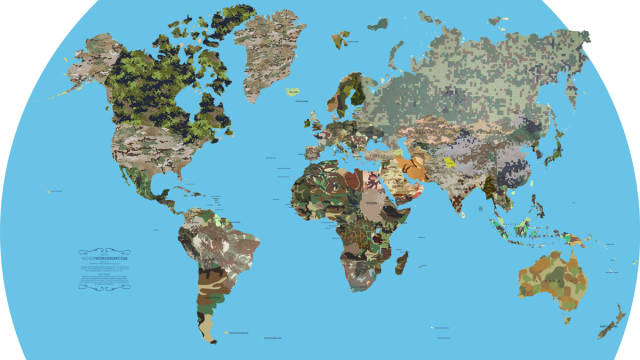 Which Exports Make Your Country the Most Money 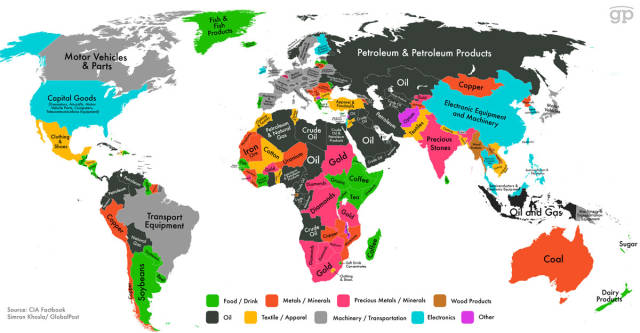 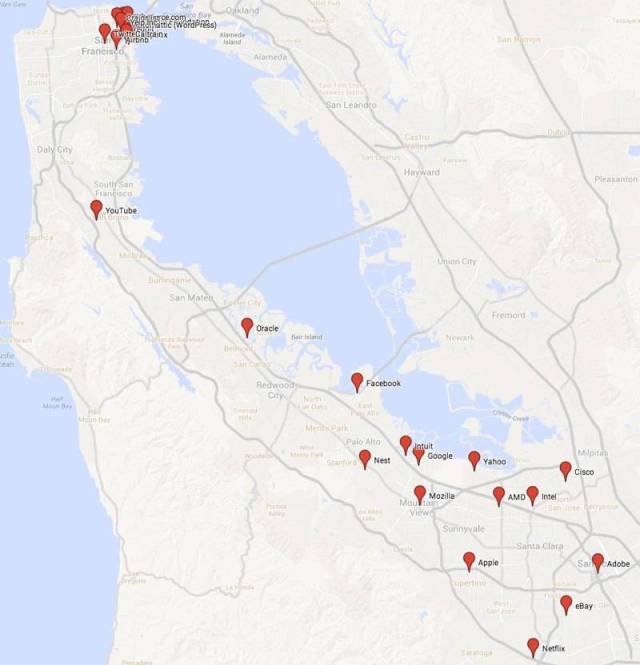 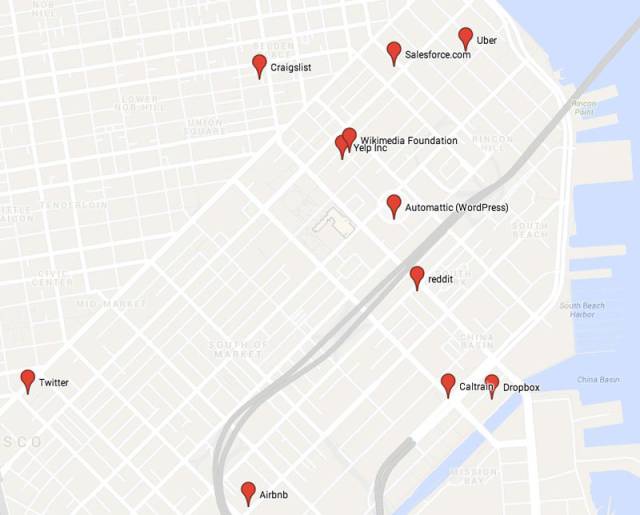 Longest Distance You Can Travel Without Crossing Major Bodies of Water

If North America Were on Jupiter or Mars

This map points out the highly uneven spatial distribution of (geotagged) Wikipedia articles in 44 language versions of the encyclopaedia. Slightly more than half of the global total of 3,336,473 articles are about places, events and people inside the red circle on the map, occupying only about 2.5% of the world’s land area. The article locations were mapped on top of a dataset obtained from Natural Earth using Buckminster Fuller’s Dymaxion map projection that has little distortion of shape and area and highlights that there is no ‘right way up’.

This uneven distribution of knowledge carries with it the danger of spatial solipsism for the people who live inside one of Wikipedia’s focal regions. It also strongly underrepresents regions such as the Middle East and North Africa as well as Sub-Saharan Africa. In the global context of today’s digital knowledge economies, these digital absences are likely to have very material effects and consequences. 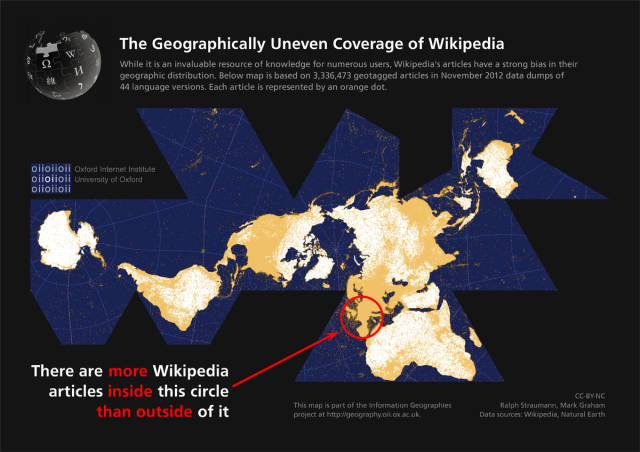 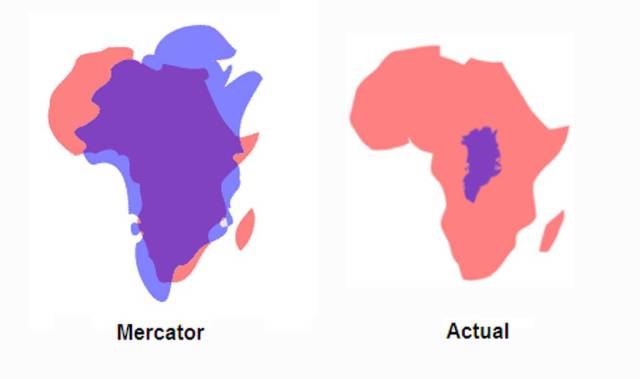 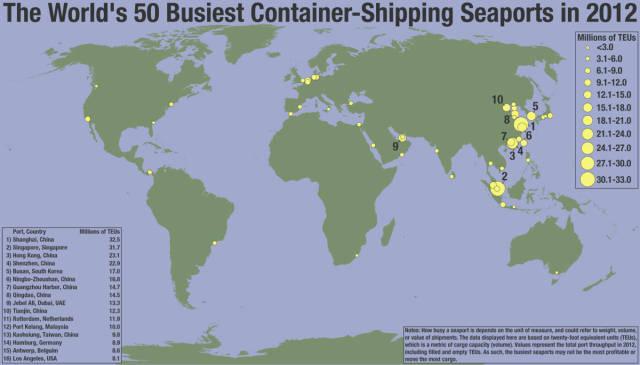 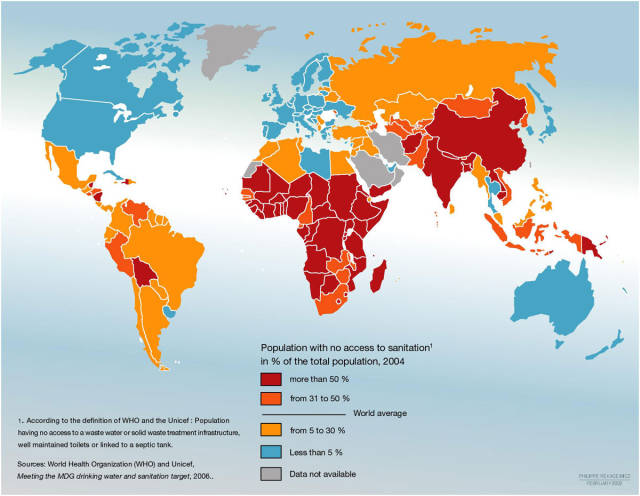 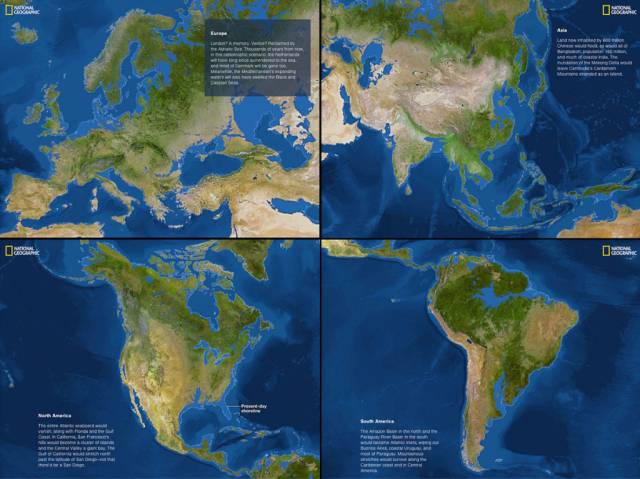 Nutella and the Global Economy 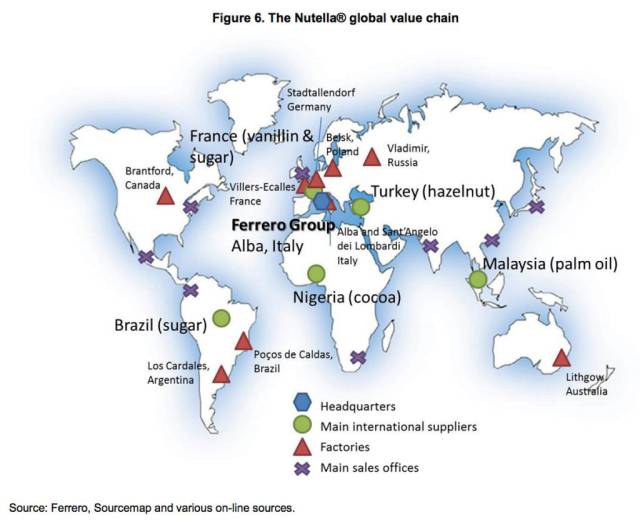 People Tweeting About Sunrises Over a 24-Hour Period

Fiber Optic Cables Around the World 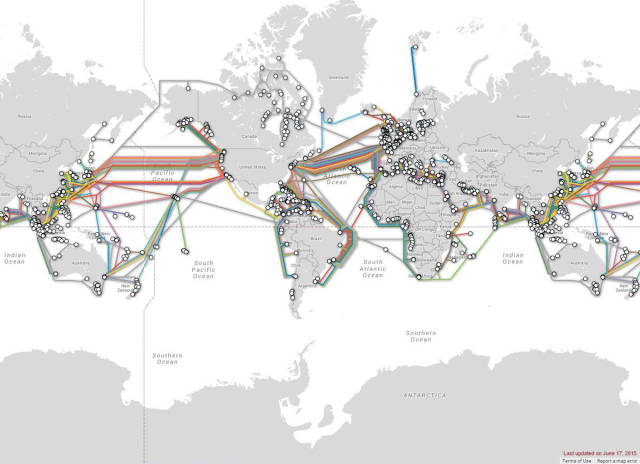 Key Import Sources Around the World 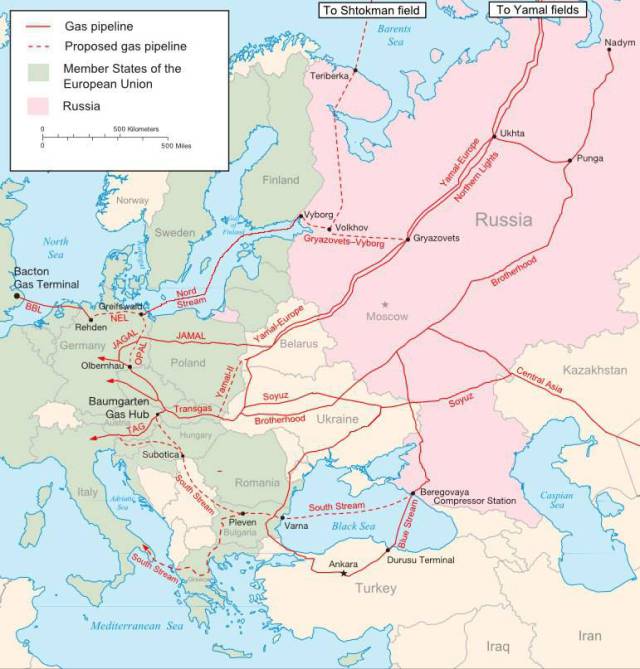 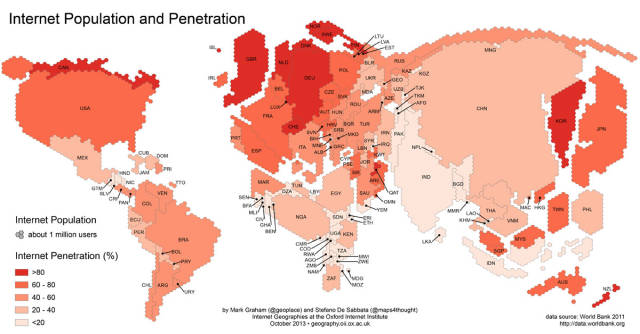 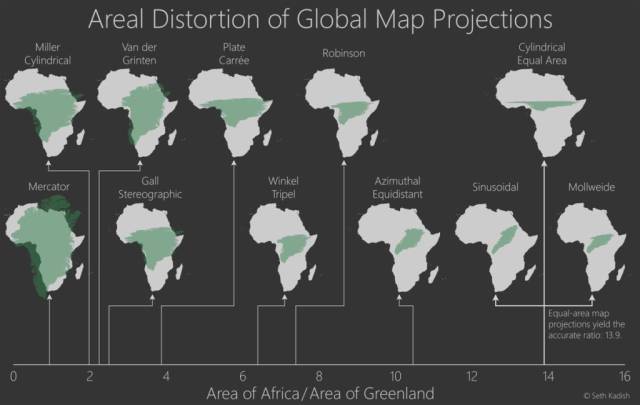 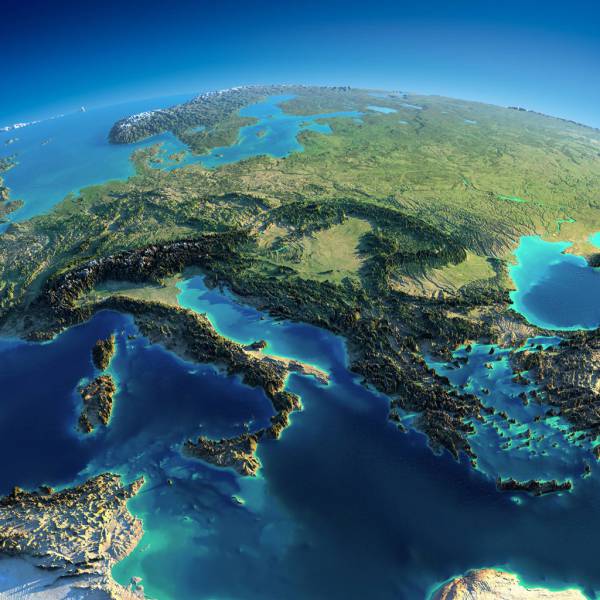 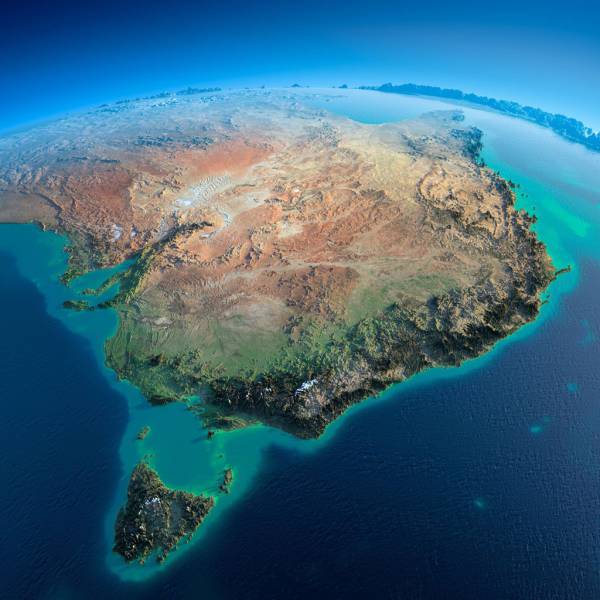 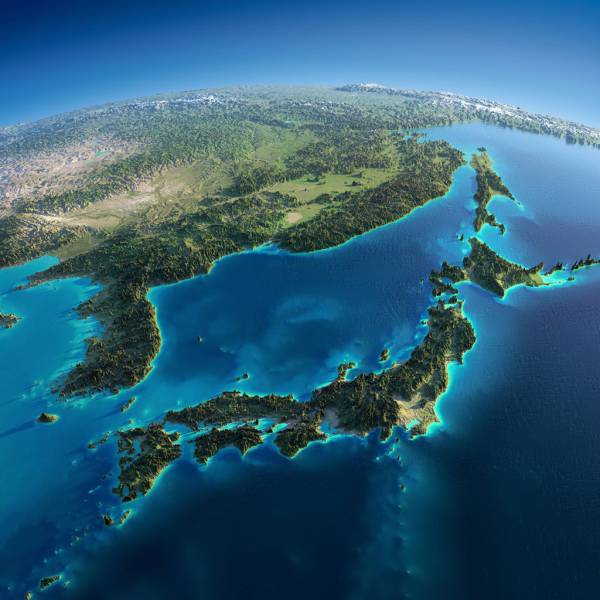