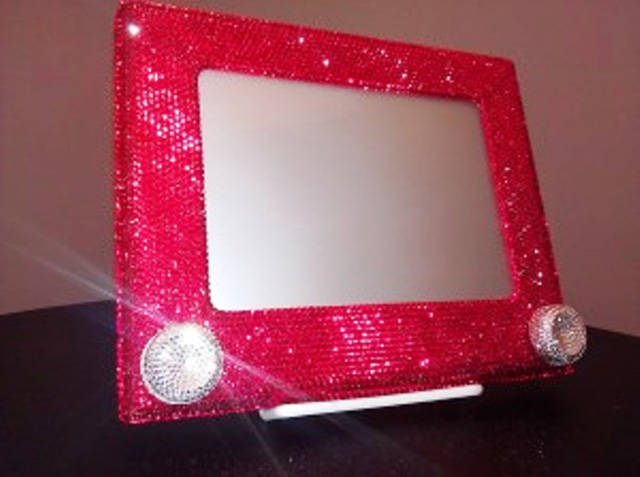 Ride-on Plush Giraffe, price: $1,879...Available at petittresor.com, the standing ride-on giraffe can support up to 150 pounds (68 kg). Originally created for exclusive European collectors, each plush animal is meticulously handcrafted from portraits of real animals and comes with a "Toys that Teach" tag describing in detail their habitat, lifestyle, care of their young and eating habits.
2 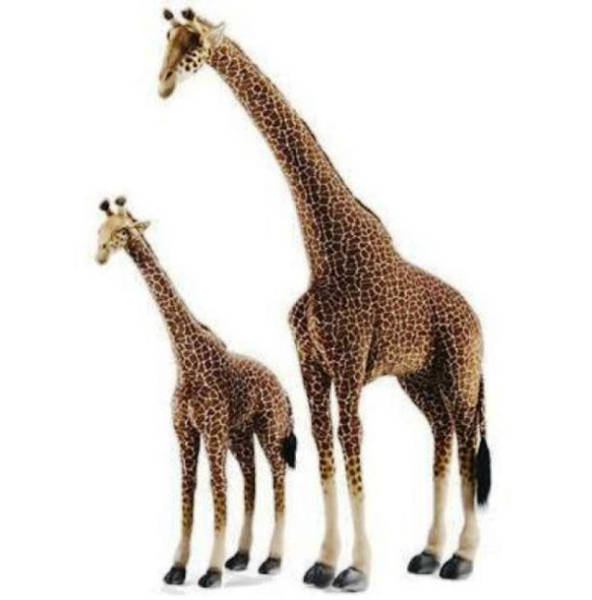 1978 Telescopic Light Saber Darth Vader, price: $6,000...Originally sold for just $2.49, the first set of these 1978 Star Wars figures were discontinued because the light saber extended and this was found to be an undesirable trait. As only a few hundred pieces of this Kenner version of Darth Vader were actually manufactured, the figure is now worth up to $6,000.
3 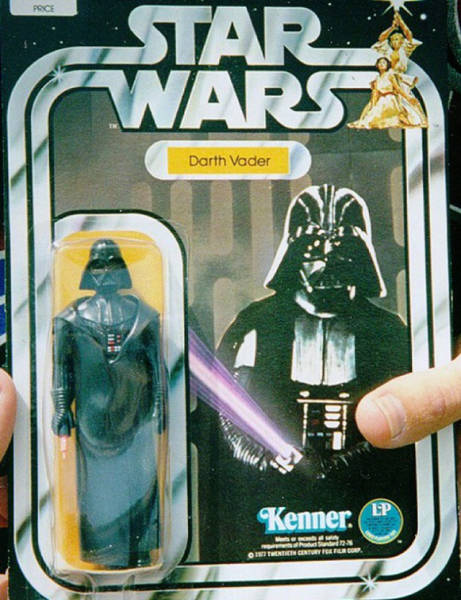 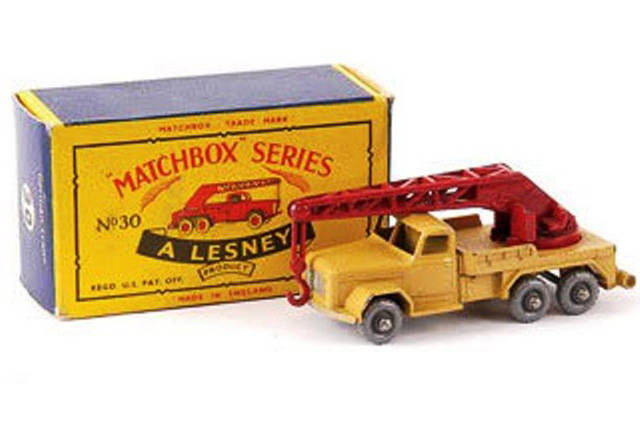 Toy Sewing Machine, price: $13,600...Although this bizarre toy sewing machine was not made from precious materials like many other toys featured in this list, it became the most expensive item of its kind in April 1996 when an English industrial sewing-machine dealer bought it for $13,600 in an auction in London.
5 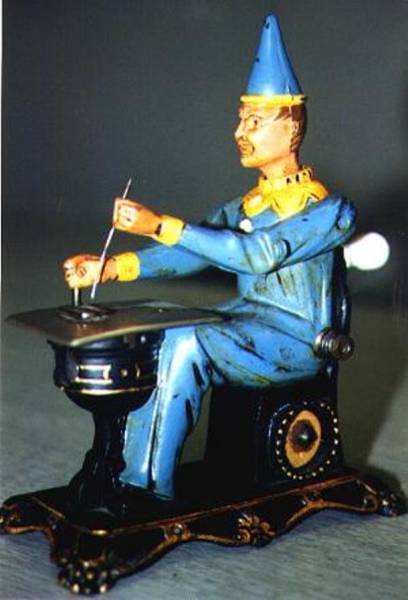 Babe Ruth Figure, price: $13,600...In 2009, a figure of New York Yankees legend Babe Ruth was sold in an eBay auction for a staggering $13,600. Made by master figure creator and avid baseball fan Todd MacFarlane, this particular version of the toy was unique due to the color of Babe’s hat (blue instead of black). In fact, MacFarlane only produced 5 copies of this particular version, two of which ended up in his personal collection while the other three were mixed into distribution.
6 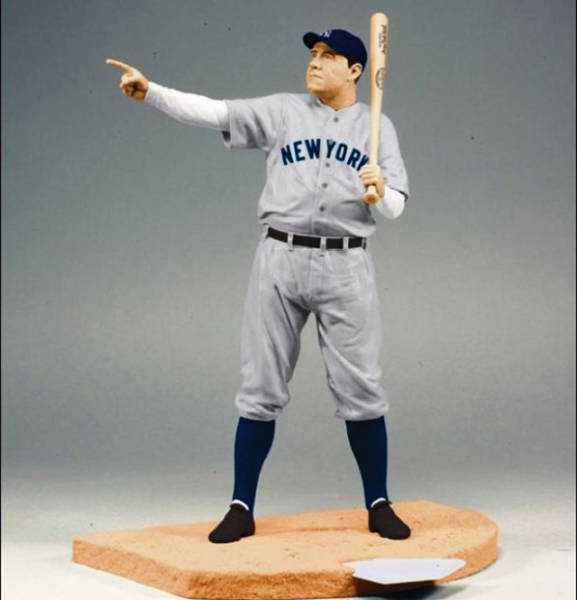 Life-sized NBA Figure, price: $15,000...In 2003, NBA offered their fans the opportunity to buy life-sized Lego figures of their favorite players. The fans could choose from a variety of famous players including Jason Kidd, Shaquille O’Neal, Kobe Bryant, Chris Webber and Allan Houston. Each of these figures were worth $15,000.
7 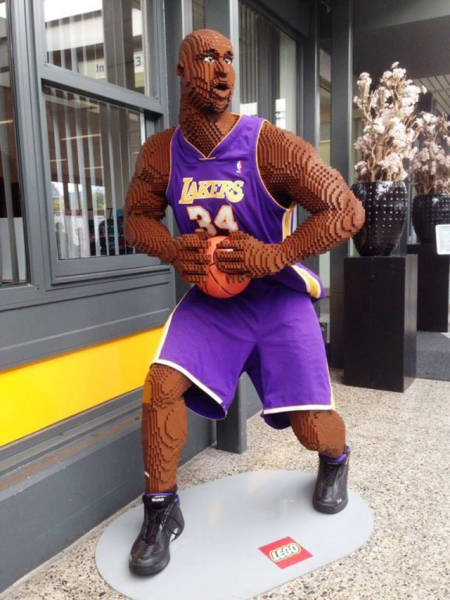 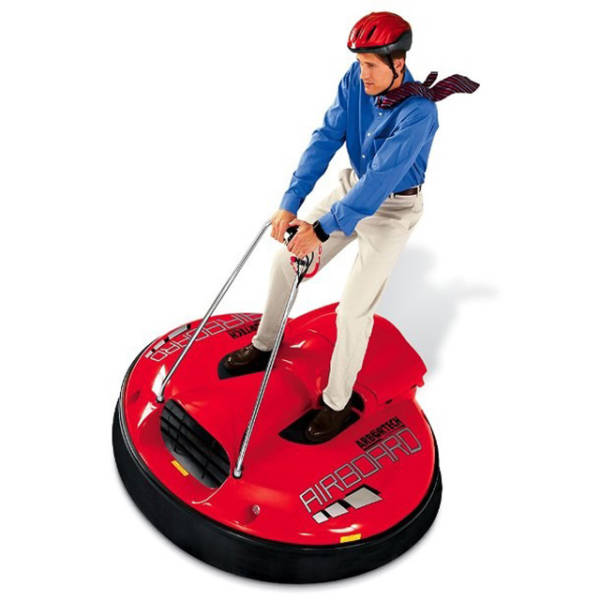 Gold Nintendo Gameboy, price: $25,000...The limited edition of Nintendo Gameboy, the world's most popular handheld toy, was created by British jewelers Asprey of London in 2006. Made from 18-karat gold and diamonds, this Gameboy can be yours for mere 25,000 dollars.
9 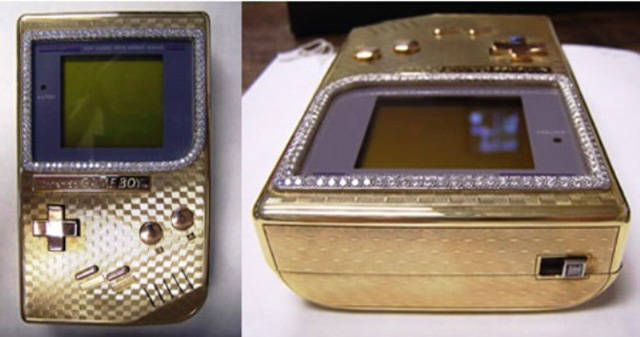 PEZ Dispenser, price: $32,205...As PEZ dispensers are popular collection items, it is not surprising collectors are willing to pay seemingly excessive money to get some of the rarest pieces. But the 1982 World’s Fair Astronaut B PEZ Dispenser exceeded everyone´s expectations. Believed to have been a prototype to The World’s Fair board, this particular dispenser fetched over 32,000 dollars in an auction.
10 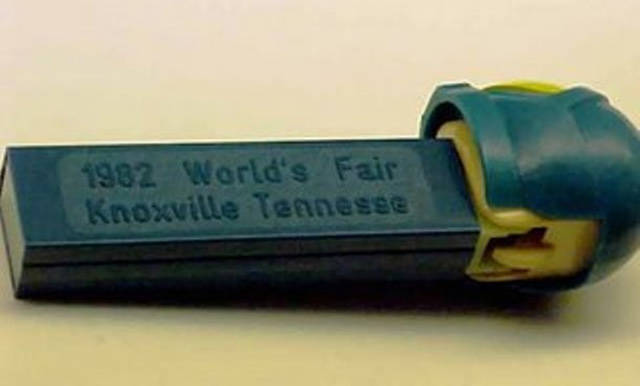 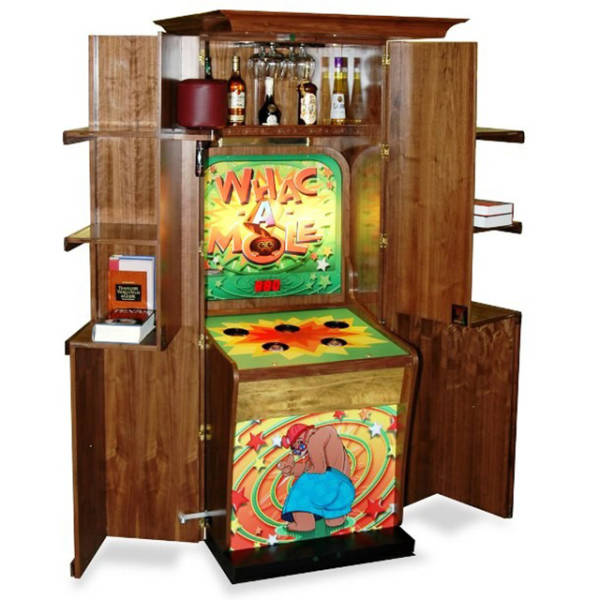 Jeweler Matt Case crafted this pacifier worth $85,000 for bespoke jewelers Russell & Case in February 2013. Created specifically for the UK Baby and Toddler Show at the BT Convention center, the pacifier is made of pure platinum and weighs 250 grams (9 oz).Platinum Pacifier, price: $85,000...
12 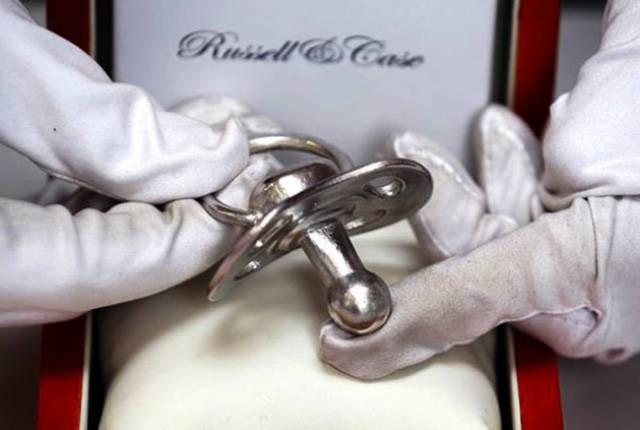 Pink Rear-Loading Volkswagen Beach Bomb, price: $72,000...This specific Hot Wheels car was discontinued because it wouldn’t work on the Mattel-made race tracks. The odd design of the toy, having a surfboard hanging from the back, made it especially desirable for collectors. So far, only two pink copies of this particular model have been found and the owner of one of them is believed to have paid $72,000 for it.
13 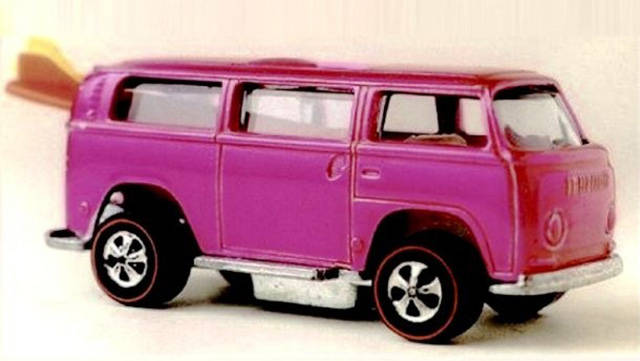 Lionel 3360 Burro Crane, price: $85,000...This Lionel 3360 Burro Crane may look humble and unassuming, but it’s actually a prototype for many model cranes released in the 1950s. Kept in perfect condition, it fetched exactly $85,062.25 in an online auction, making it one of the most expensive toy items ever sold on eBay.
14 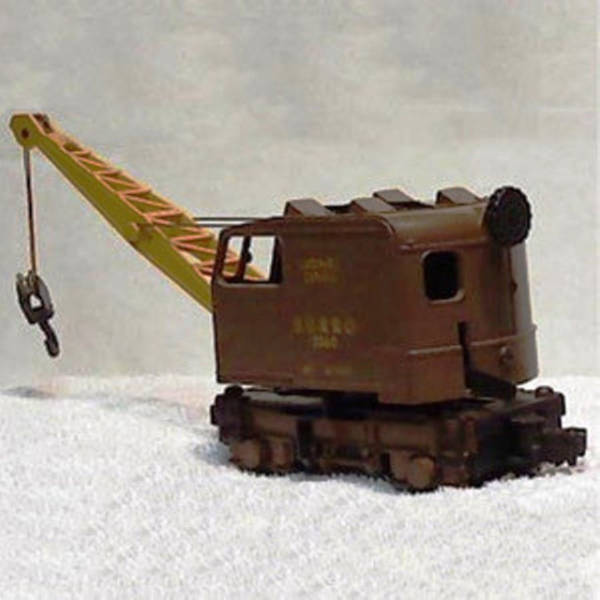 Porsche 917 Le Mans Raceway, price: $125,000...Fans of slot car racing would be excited to find this full-sized Porsche 917 replica hides a 1:32-scale wooden slot car track in it. The car track is a reproduction of the world’s oldest active sports raceway, the iconic Le Mans track in France. If you have a spare 125,000 dollars, this thing can be yours.
15 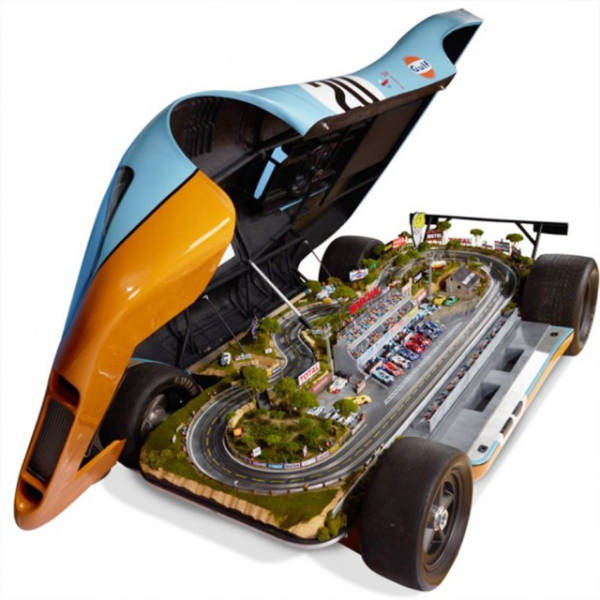 Hot Wheels Diamond Car, price: $140,000...On the occasion of their 40th anniversary in 2008, Mattel´s Hot Wheels created a special diamond-encrusted car worth $140,000. One of the world´s most expensive toy cars ever created, this model was made from 18-karat white gold and covered with over 2,700 jewels.
16 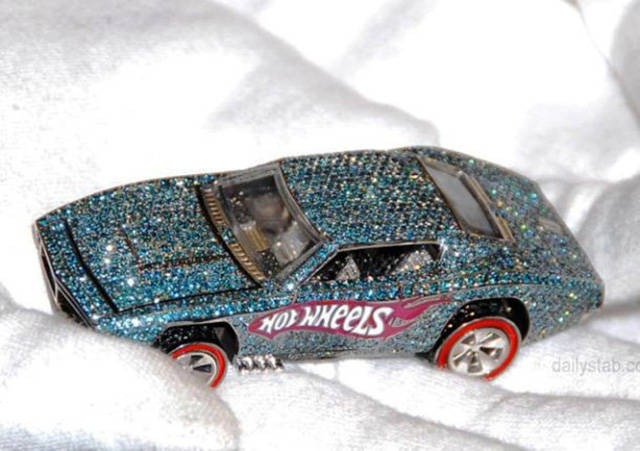 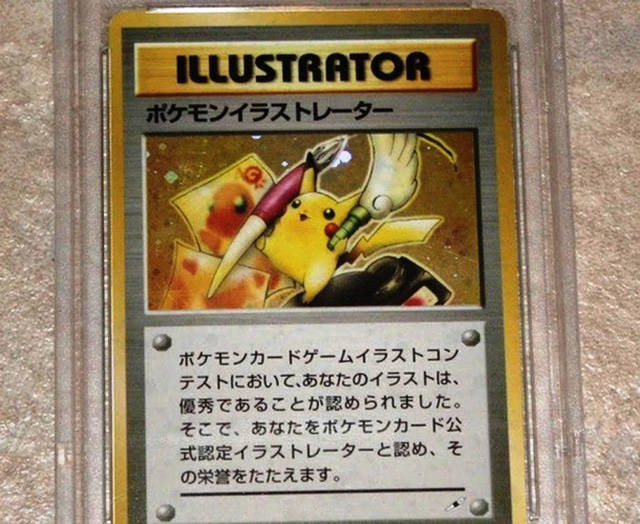 Stefano Canturi Barbie, price: $302,500...To raise money for the Breast Cancer Research Foundation, Mattel tapped Australian jewelry designer Stefano Canturi to create a special edition Barbie. After six months of hard work, he came up with a doll wearing a diamond necklace worth $300,000 alone. In 2010, the Barbie was purchased for $302,500.
18 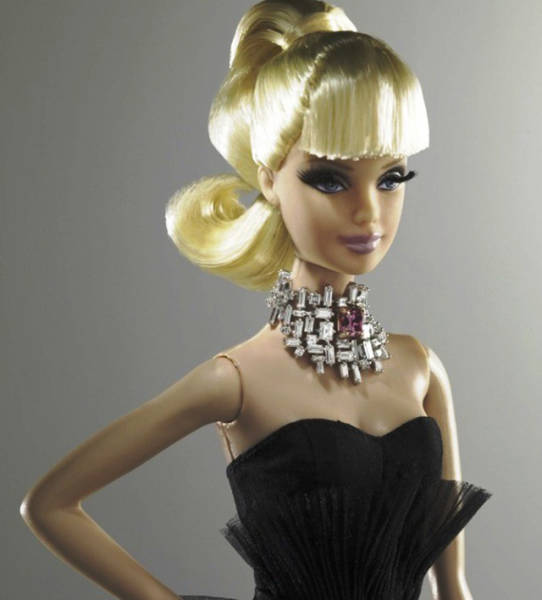 Kuratas Wearable Robot Suit, price: $1 million...Designed by Japan-based Suidobashi Heavy Industry, the gigantic robot suit known as Kuratas will enable you to experience what it feels like to be a real life Transformer. Weighing 5-tons and measuring 12.5 feet (3.8m) tall, the price tag for this tech is 1 million dollars.
19 Golden Monopoly, price: $2 million...The world’s most expensive version of the Monopoly board game is estimated to be worth roughly $2 million. The 18-karat gold and jewel-encrusted Monopoly was crafted by San Francisco jeweler Sidney Mobell in 1988. It took him one year to finish this masterpiece.
20 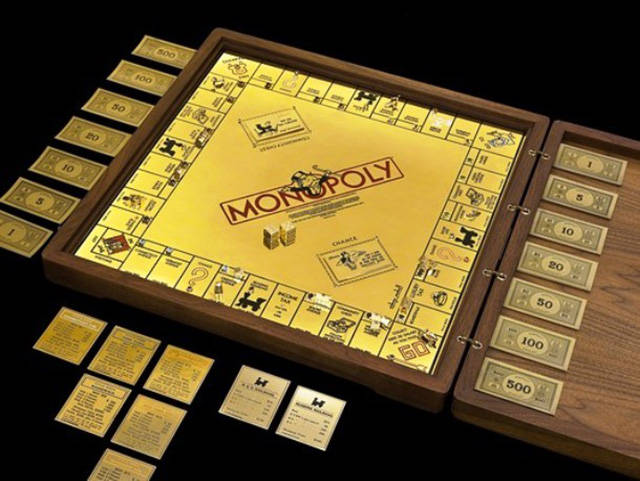 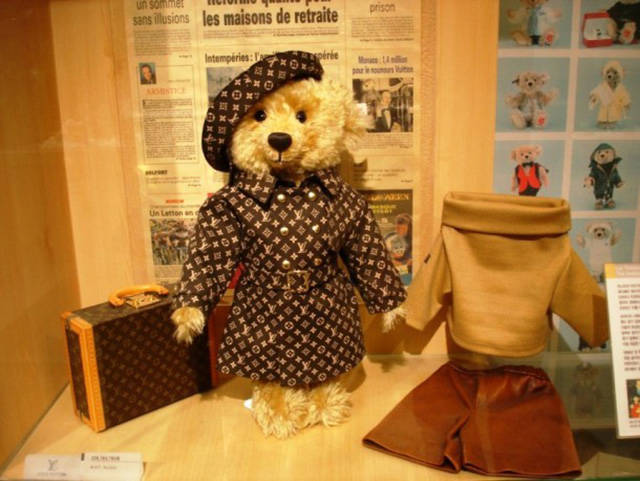 Lamborghini Aventador Model Car – $4.6 million...One of the most luxurious and desired sport cars, Lamborghini Aventador costs around $400,000. As unbelievable as it sounds, a German engineer named Robert Gulpen created a model version called Lamborghini Aventador LP 700-4 that was worth $4.8 million. Yes, the miniature version was more than 10-times more expensive than the actual car. Why? Because it was made of platinum, carbon fiber, gold and diamonds.
22 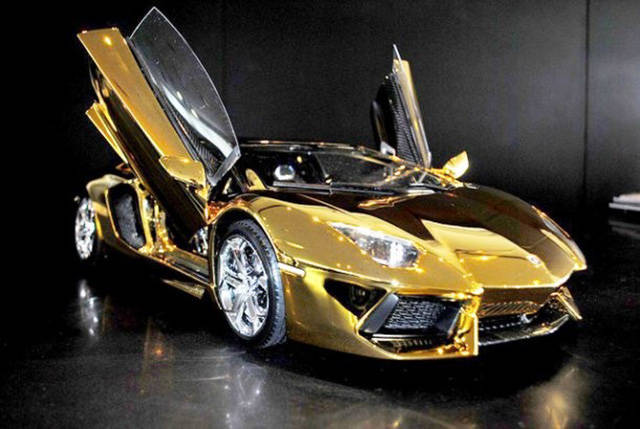 Astolat Dollhouse Castle, price: $8.5 million...The world’s most expensive dollhouse crafted over 13 years by carpenters, goldsmiths, silversmiths, glassblowers and other craftsmen is probably worth more than all the real houses in your street combined. The price of this 29-room dollhouse was estimated at a staggering 8.5 million dollars.
23 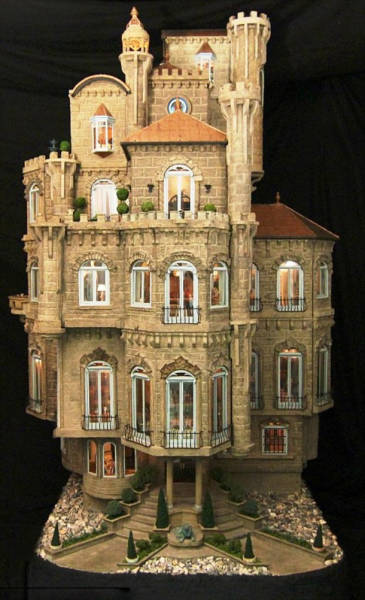