Justin and Anna Williams are frequent travellers and have visited over 100 countries but even they were shocked by some of the weird rules and regulations that tourists were forced to obey while in the country.

Justin and Anna Williams have vacationed in over 100 countries. Unsurprisingly, they say that out of all of the places they’ve been, the Democratic People’s Republic of Korea has been BY FAR the most memorable.They couldn’t believe how heavily tourists are supervised there, as well as how little some residents knew about other countries.Justin said, “It’s like traveling to a different world.” 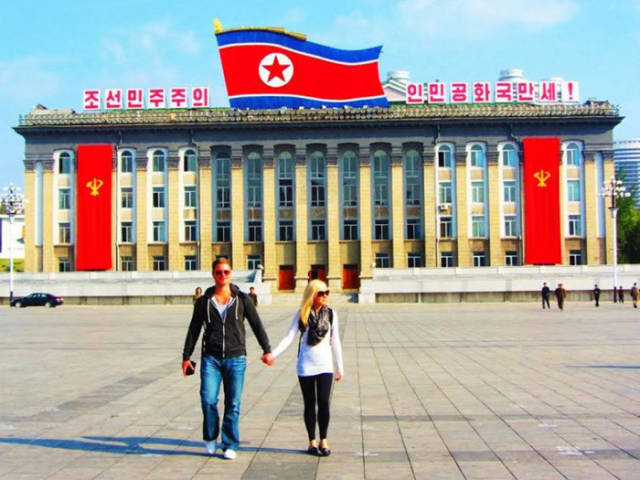 They arranged their trip through a travel operator with links to the state-owned Korean International Tourist Company. Before their arrival, they had to attend a briefing session in Beijing, where they were instructed on the strict rules. For example, they could never take pictures of military entities or statues of Kim Jong II unless his whole image was used. 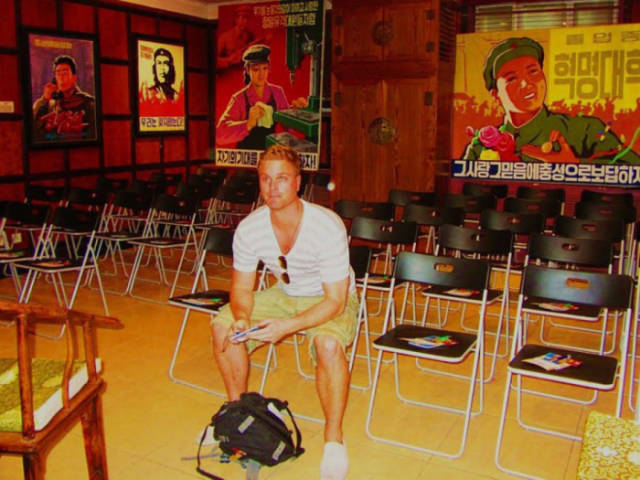 They then boarded a Soviet-era plane, where the in-flight entertainment consisted of footage of North Korean soldiers defeating US GIs during the Korean War. 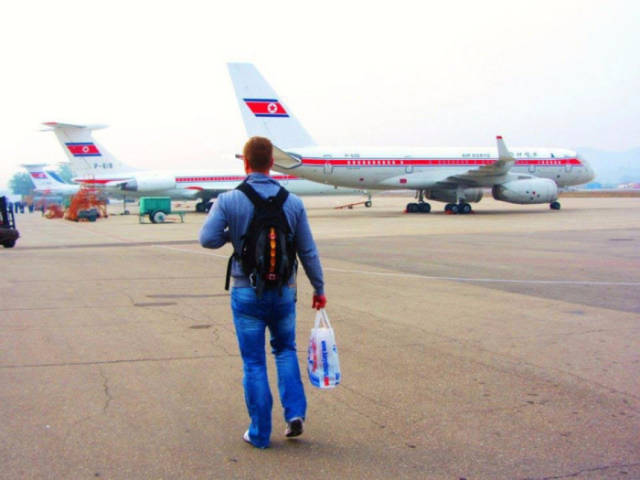 This shot of the capital, Pyongyang, was taken in-flight. When they landed, their phones were searched for GPS capability and their passports were actually taken away until their departure.Anna said, “The scariest part of the trip was knowing that no matter what, it was simply impossible at that point to get out of the country, even if we wanted to.” 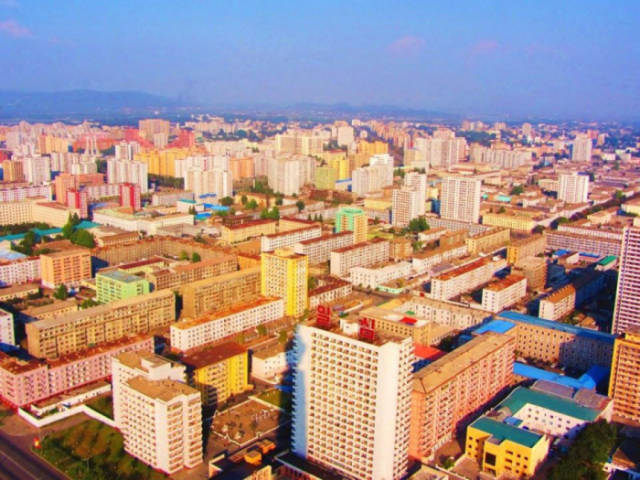 Government minders (guides employed by the government to make sure they were staying in line) and a driver stayed with them their entire trip.The couple was surprised to learn that none of them had ever heard of pizza. 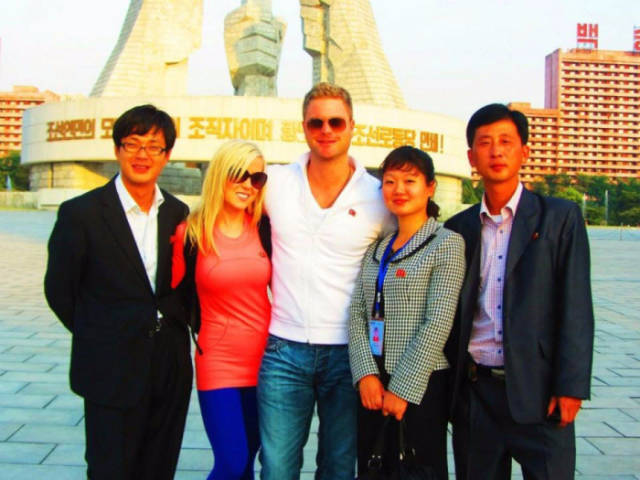 There were hardly any vehicles on the roads of central Pyongyang, due in part to the high poverty rate in North Korea. 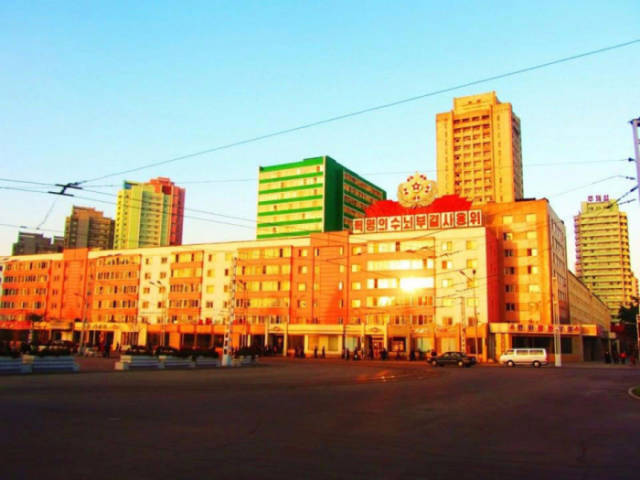 Next they were taken to the Yanggakdo Hotel where foreigners can only stay on the 25th floor. They weren’t allowed to leave their hotel until they were picked up each morning. 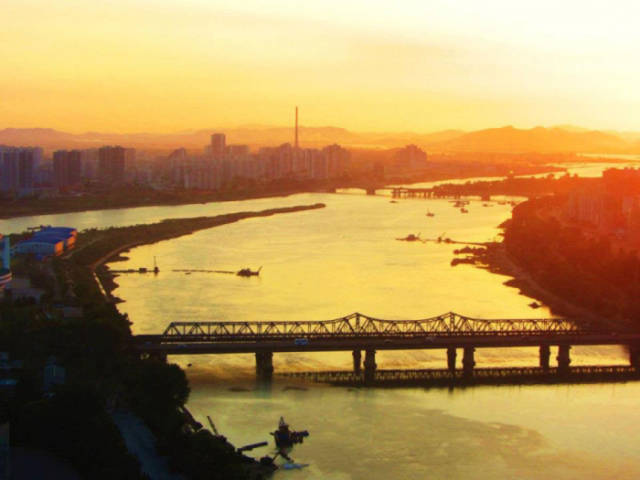 The Arch of Triumph inaugurated the 70th birthday of Kim II Sung in 1982. 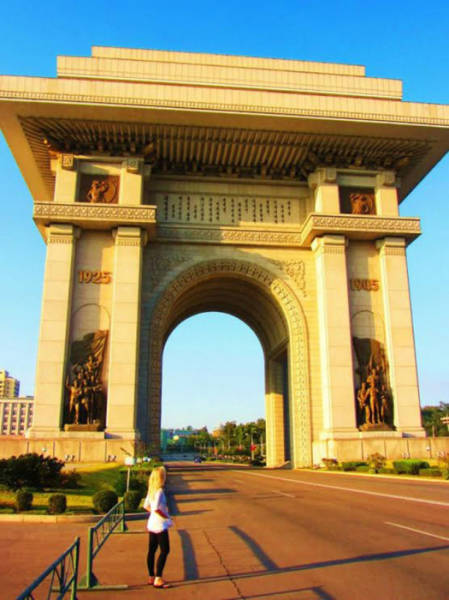 Anna and Justin said that two things you would always see in North Korea are huge monuments and military personnel. 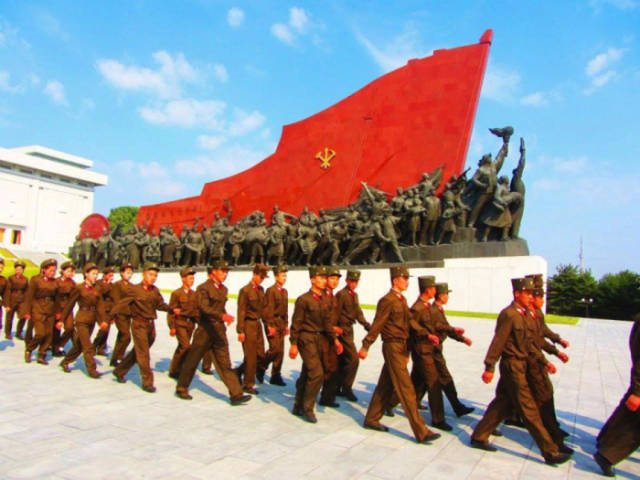 They visited the Dear Leader (right) and Great Leader (left) statues that feature Kim Jong II and his father, Kim II Sung. Anna and Justin were required to bow before the giant statues and lay flowers in front of them. 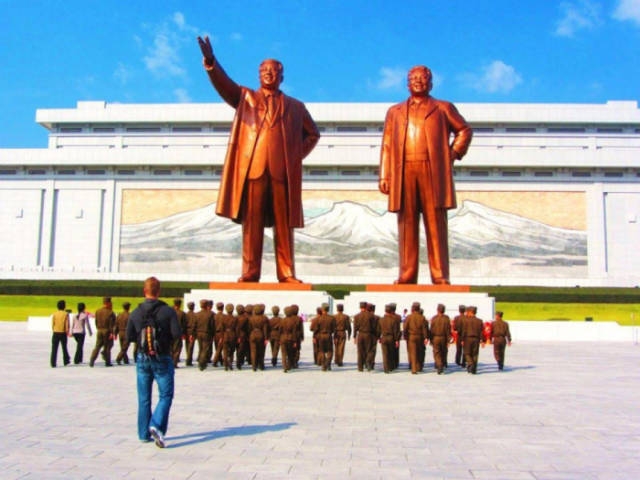 They also saw the massive Monument to the Party Founding that commemorates the creation of the Workers’ Party of Korea in 1946. 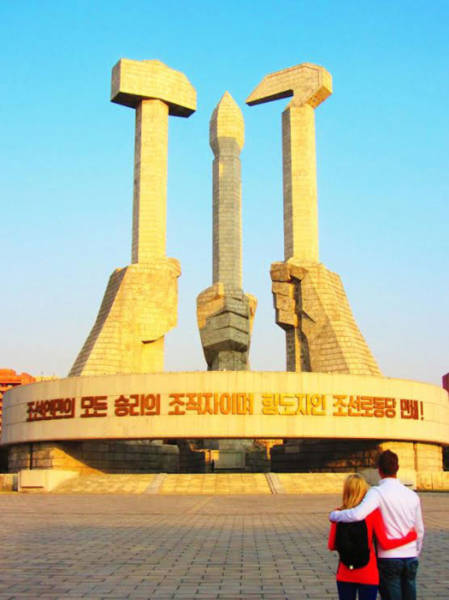 They drove 4 hours south to the Demilitarized Zone along the South Korea border. The creepy highway was filled with only tanks and troop convoys, no civilian vehicles. 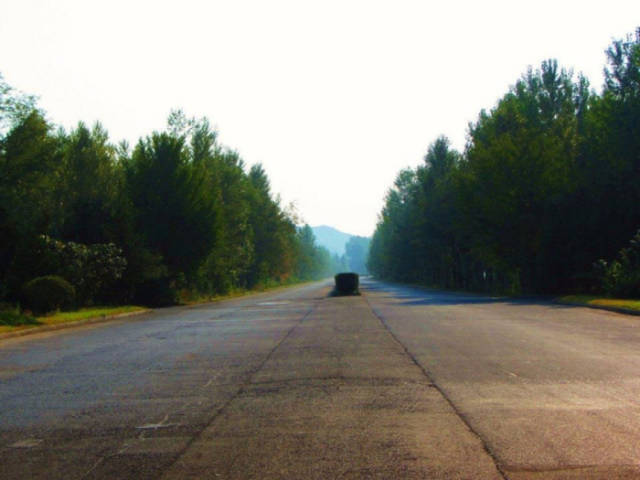 The South Korea/North Korea border starts at the concrete line between the blue huts here. Former President Bill Clinton called the area “the scariest place on Earth.”Not surprising, since it’s the most heavily militarized border in the world. 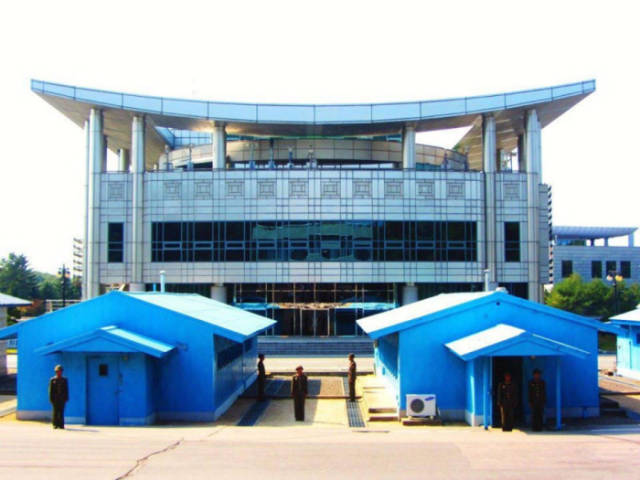 The couple said they were the only Westerners on the North Korean side of the border, and that it was “extremely tense.” 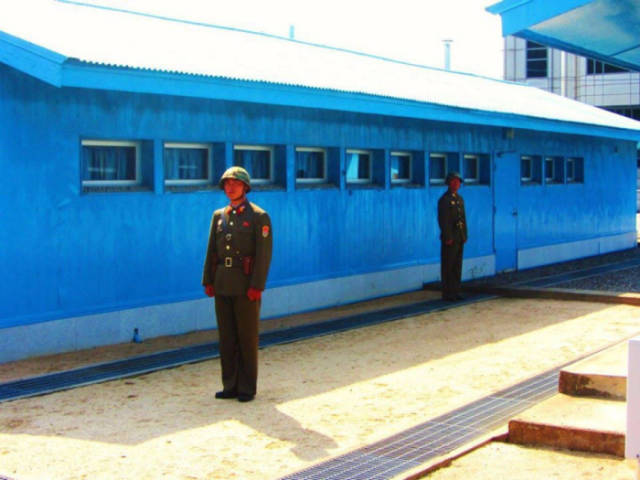 However, they still talked the guards into letting them into one of the blue huts. South Korea starts right behind the last 2 guards behind Justin. 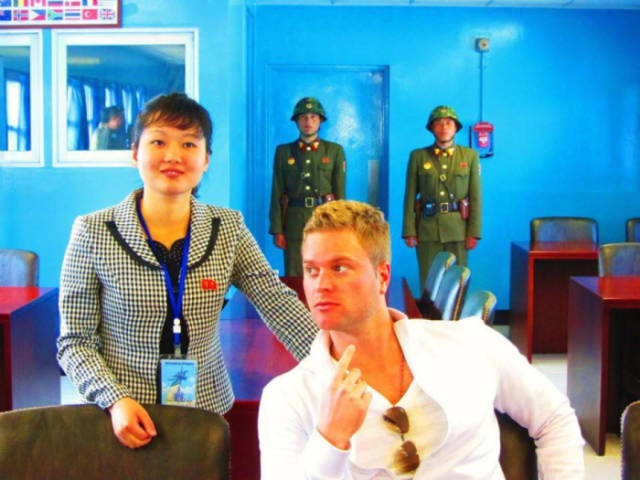 Back in Pyongyang, they went to a ‘Fun Fair’ that had roller coasters, bumper cars and a target practice competition with locals. It’s usually restricted to ‘elites,’ but they got to go… with at least half a dozen guard and minders in tow. 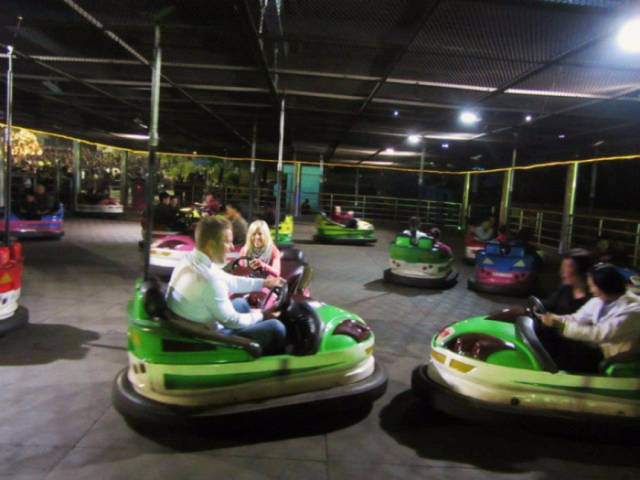 Anna snapped a picture with some of the female military personnel before their platoon leader caught them. 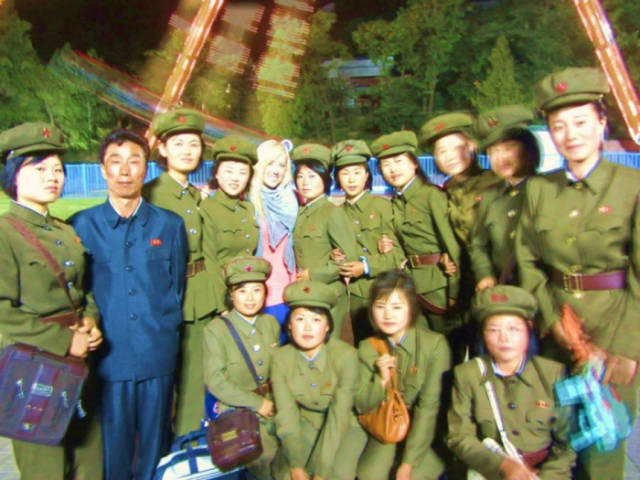 Later, they were escorted to the Golden Lane Bowling Alley. The pins on the men’s shirts are ‘loyalty badges’ that have the image of the Dear Leader’s face. Apparently, the badges have to be worn by every North Korean adult. 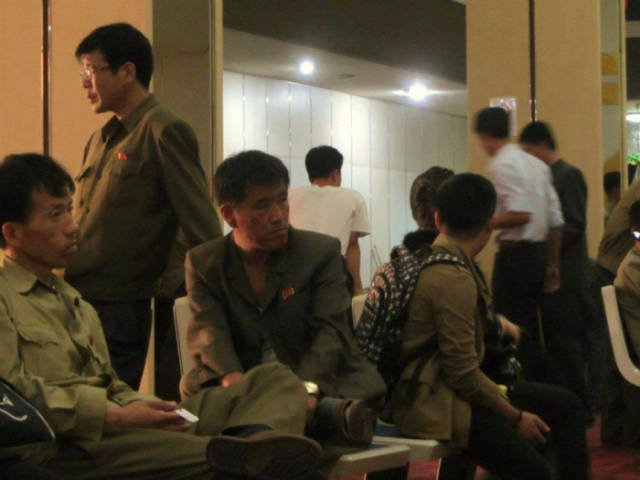 The bowling alley was FILLED with flags. The couple said, “Propaganda infused almost every element of life there.” 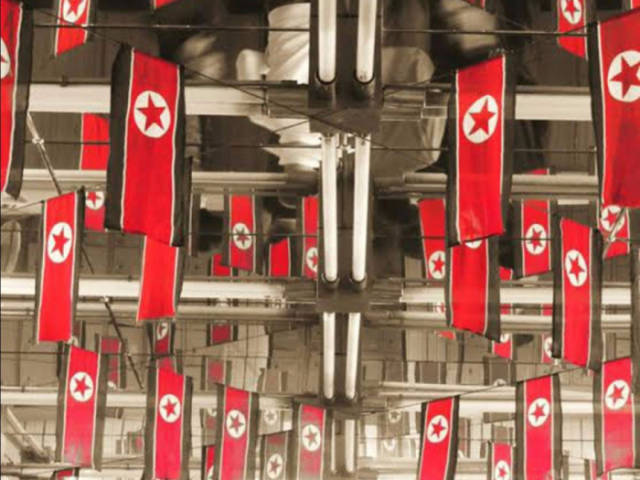 All of the propaganda posters were hand-drawn. After some difficulty they were able to ship one home from a contact in China. 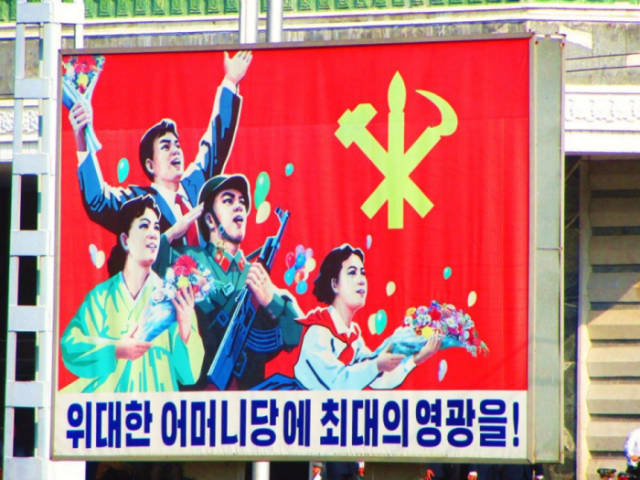 The couple celebrated Justin’s birthday at Chongryu Hotpot Restaurant with their minders as guests. 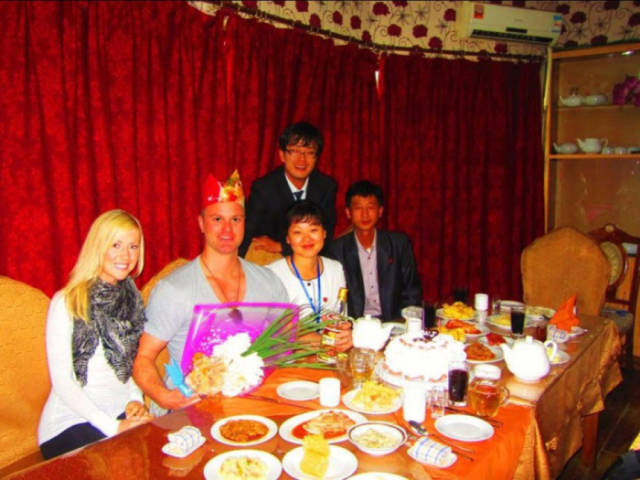 They were even taken to a local school, which was showcased to them as a “world-class” place of education. 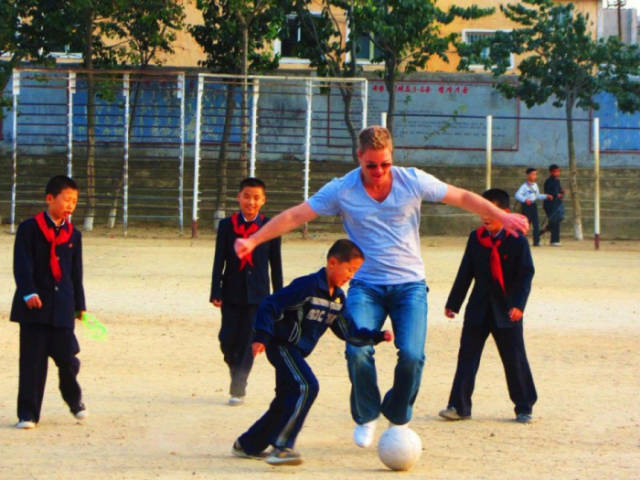 During their visit, the entire school shut down and put on a dance recital for them. 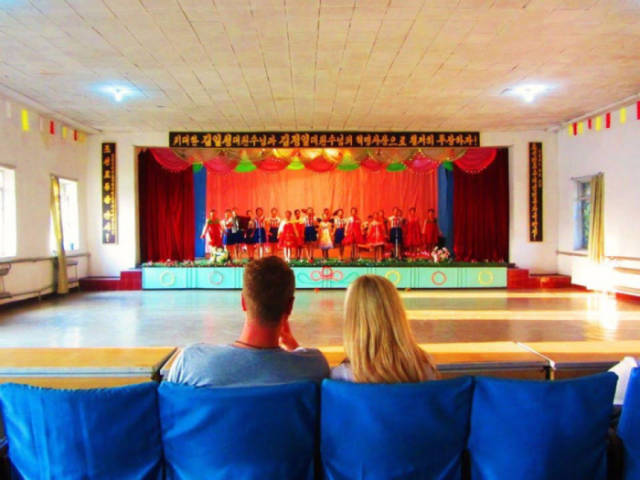 This billboard was inside the school, and it shows Kim II Sung, the former supreme leader. 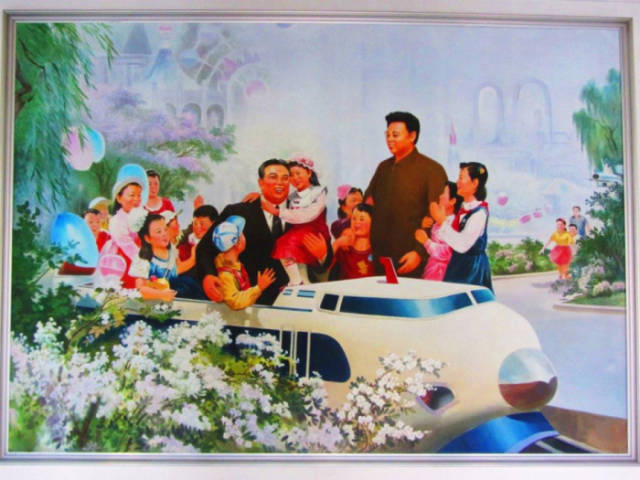 They got to witness sporadic celebrating on the streets during “Party Foundation Day,” which takes place on October 10th every year in honor of the founding of the Workers’ Party of Korea. 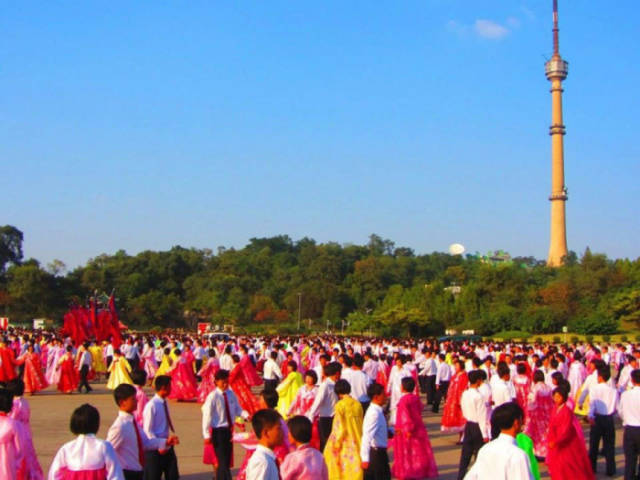 The biggest highlight of the trip, in Justin’s opinion, was the Grand People’s Study House. It contains 30 million books, most of which feature the Great Leader and the Dear Leader.About the whole trip, Justin said, “It was surreal to be there and to be taken back to all of the news clips you see about the country.” 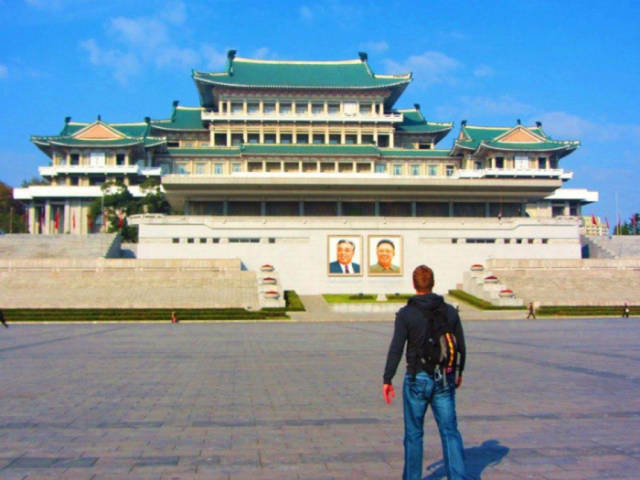 meukr 5 year s ago
they hate us 'cause they ain't us.
Reply
8

gigantes 5 year s ago
they're just children, conditioned from birth as to what to believe in and what to hate.

BuzzBuzzBuzz 5 year s ago
They're afraid of losing any form of control over the population. They're little men with little penises and big guns. They're afraid of the free world and all the good things associated with it. They are THE Matrix.
Reply