Jason Alexander’s wardrobe was often intentionally one size too small

Larry choose to do this to make Jason uncomfortable which he thought would help him stay in character. It certainly didn’t hurt Alexander’s performance. The real tragedy, however, was that Jason was the only cast member never to win an Emmy. I’m sure that helped keep him especially bitter as the seasons wore on. 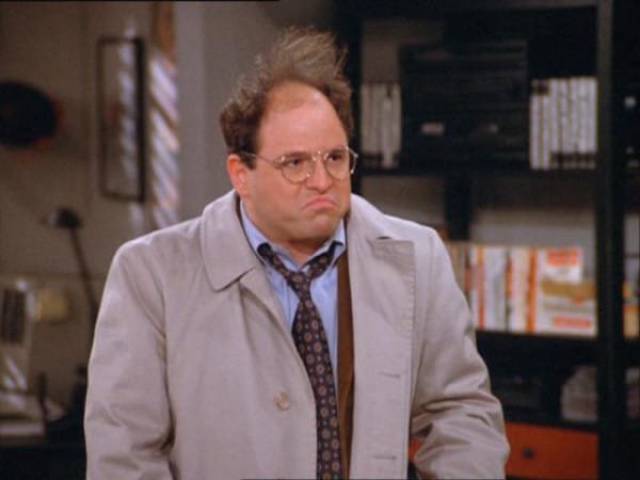 If you look closely, the exterior scenes for Monk’s Cafe were actually of Tom’s Restaurant on the corner of West 112th Street and Broadway in New York City, whereas the interior shots were filmed on a soundstage. In addition, Tom’s Restaurant has four large rectangular windows when viewed from the side, but Monk’s Cafe has two small domed windows with curtains. 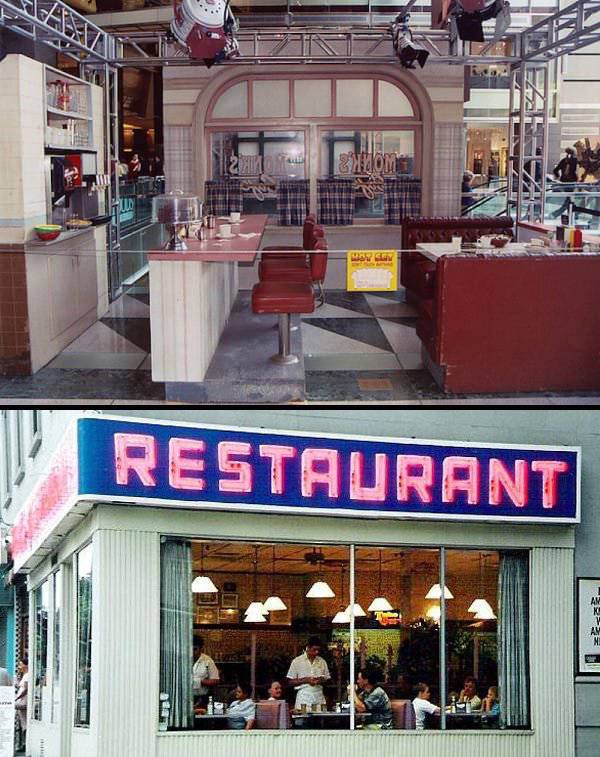 Steve Buscemi also auditioned for the role of George Costanza

Actually, many soon-to-be successful box-office actors auditioned for the part of George. Aside from Buscemi, Danny DeVito was also considered for the part and Paul Shaffer, David Letterman’s band leader, actually turned down the role. Thankfully I’d say it all worked out for the best. 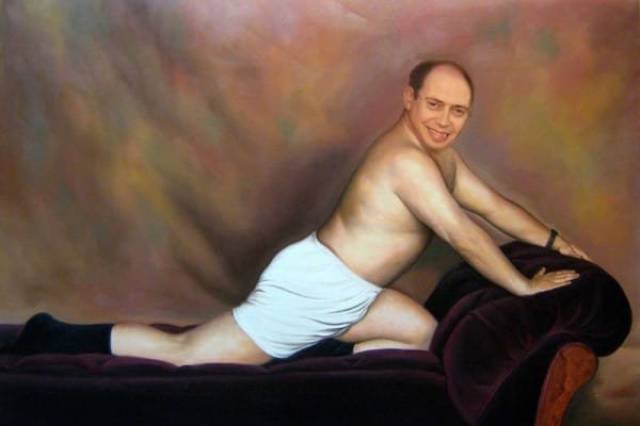 Kramer’s popularity was becoming an issue

As Kramer’s popularity burned hotter with each passing episode, the rest of the cast began to complain that the audience’s prolonged applause for his iconic entrance were actually ruining the pace of the show. Thankfully, the show was a little too good for something like that to railroad its success. 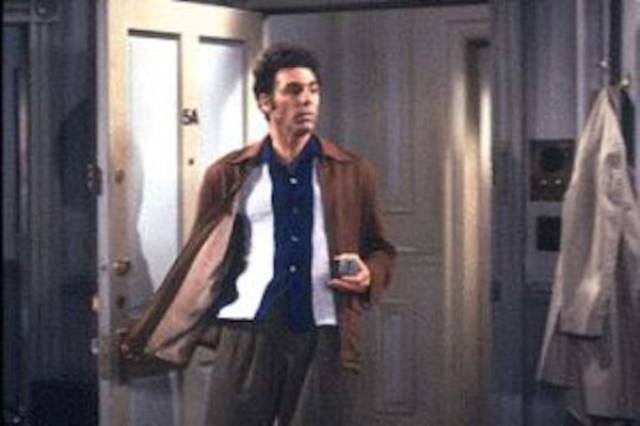 Frank Sinatra passed away during the series finale

Sadly, Ol’ Blue Eyes died during the West Coast airing of the episode, but a silver-lining was that the ambulance only took four minutes to reach Sinatra’s Los Angeles home. The LA fire chief later explained that there was so little traffic due to the fact that everybody was home glued to their TV sets for the final episode. 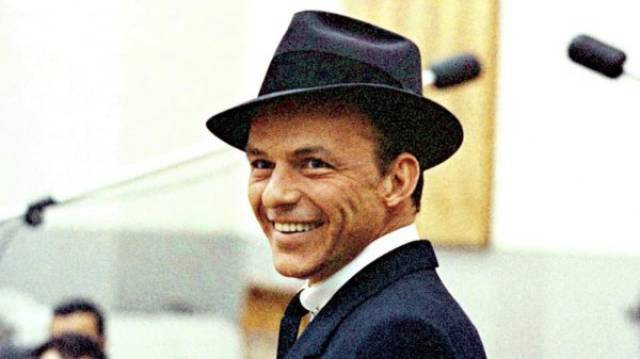 Julia Louis-Dreyfus was pregnant during seasons 3 and 8

The show never changed a single script to address the baby-bump, and instead they had Elaine stand behind couches or carry boxes and laundry baskets. The ’90s fashion also helped to conceal her baby with the popular baggy look of the day. 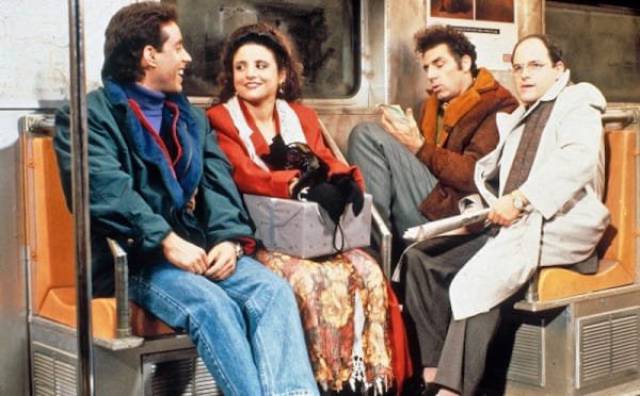 By the show’s finale, Jerry had 12 cereal boxes sitting in his cupboard. Frankly, in most episodes he had far too many boxes for any normal single man. Hell, even if he were a family man it still would’ve been excessive amount of cereal. 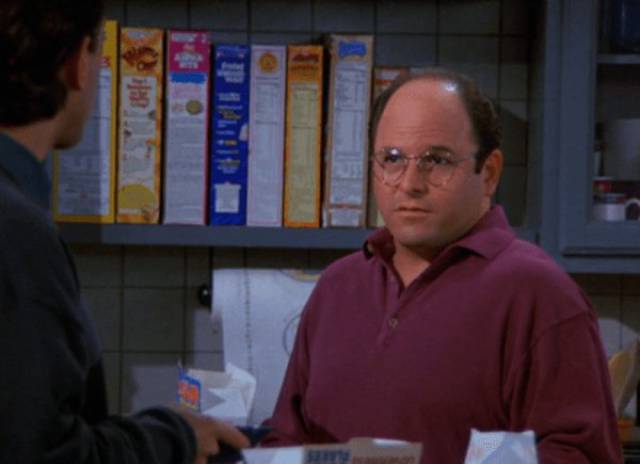 Before being cast Kramer, Michael Richards auditioned for the role of Al Bundy on Married with Children. The part eventually went to Ed O’Neill. Both actors were perfect in their wildly different roles, and both shows are still among the greatest ever made in my humble opinion. Win Win. 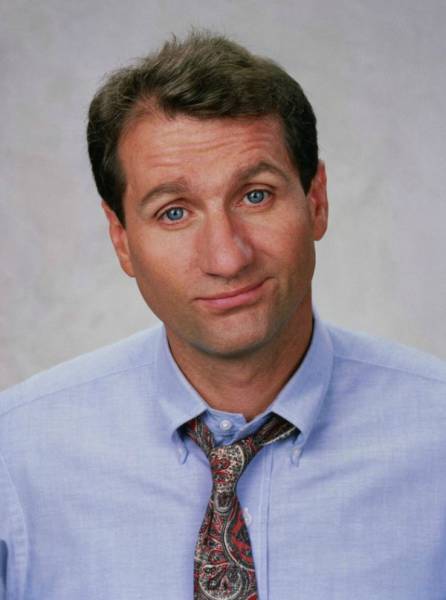 Larry David enforced a “No hugging, no Learning” policy

What does “No hugging, no learning” mean? L.D. wanted there to be no sentimentality written in the episodes and for the characters not to grow-up or evolve in any way from their experiences. Each episode stands on its own. 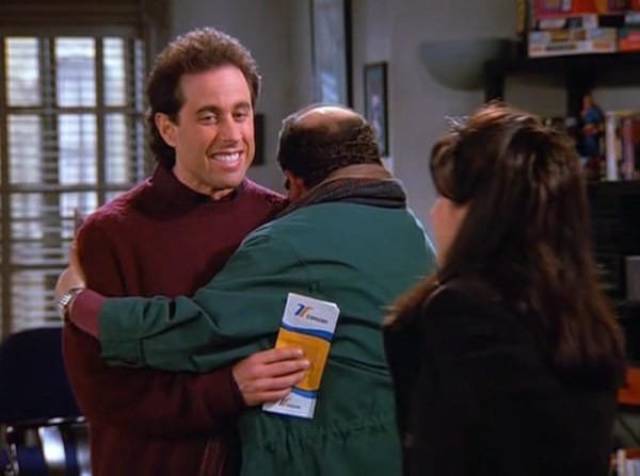 Jerry clearly was hazy about his home address

In the episode “The Beard”, Jerry tells the polygraph examiner that his address is 129 West 81st Street. However upon closer inspection, the exterior shots of his apartment always were marked 757. 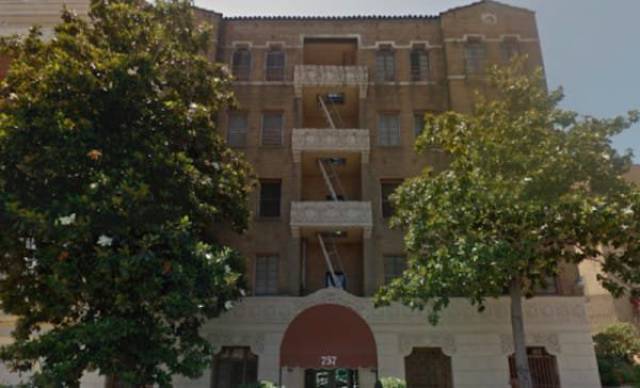 In all but one of Seinfeld’s 172 episodes, George Costanza appears on screen at some point. However, he was nowhere to be found in the season three episode, “The Pen,” which has Jerry and Elaine visiting Jerry’s parents in Florida. Nervous and agitated that being written out of the episode meant that he could be written out of the show, Alexander warned Larry David that “if you do it again, do it permanently.” Needless to say, it never happened again. 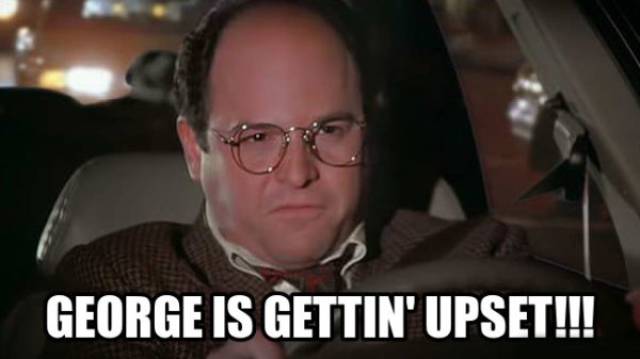 Junior Mints were actually not Kramer’s candy of choice

“Who’s gonna turn down a Junior Mint? It’s chocolate, it’s peppermint, it’s delicious!” Technically Kramer would’ve preferred M&Ms or even Lifesavers as his first option, however these companies didn’t really see the benefit in having their product fall inside a patient on an operating table. Junior Mints rolled the dice and experienced a huge surge in sales directly following the episode. Kudos to Junior Mint for their vision. 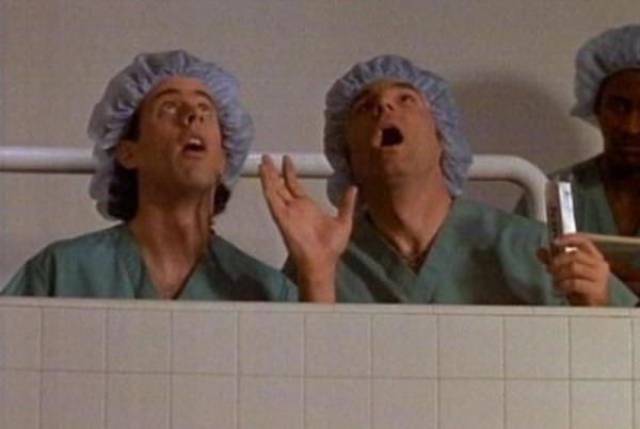 In the very first episode, George and Jerry are discussing a button, and in there final episode, while sitting in a jail cell, they were sharing the same conversation about a button, ”See, now to me, that button is in the worst possible spot. The second button literally makes or breaks the shirt. Look at it, it’s too high, it’s in no-man’s land.” Say what you will about the failure of the final episode, but at least L.D. was trying to wrap it up nicely in a bow. 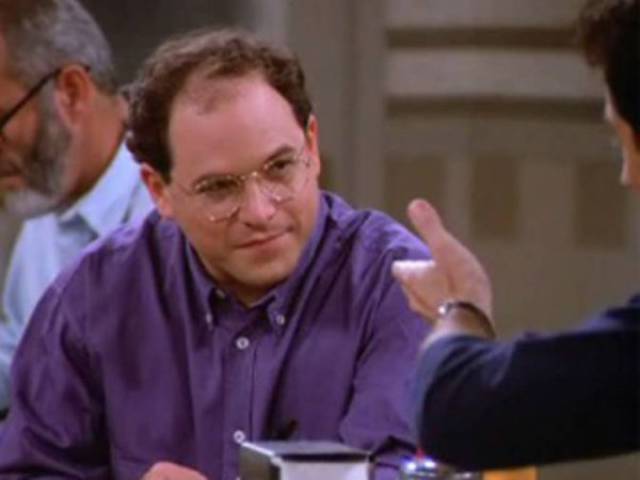 Seinfeld was actually awarded by the American Academy of Dermatology

In an episode named “The Slicer,” Marcia Cross, or Pimple Popper MD as Jerry referred to her, played a dermatologist that Jerry was dating. Jerry dumped her, but later came crawling back when he was desperate to get an ominous mole checked out. The AAD awarded the show for promoting skin cancer awareness, whether it was their intent at all, or not. 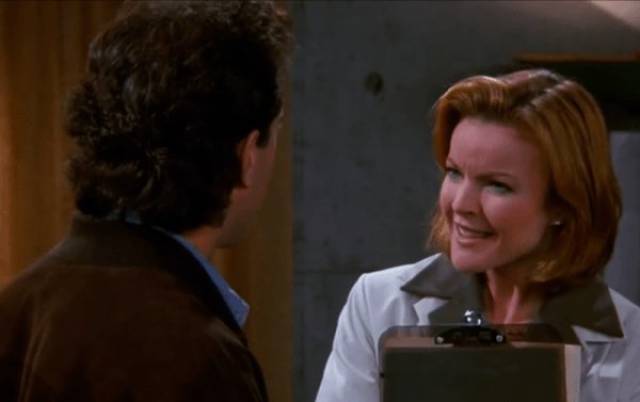 Rosie O’Donnell auditioned for the part of Elaine at the request of Larry David as the two were old friends who came up on the standup comedy scene together. Other actresses considered were: Mariska Hargitay, Patricia Heaton, Amy Yasbeck, and Megan Mullally. It’s hard to imagine anybody else other than Julia Louis-Dreyfus as Elaine. 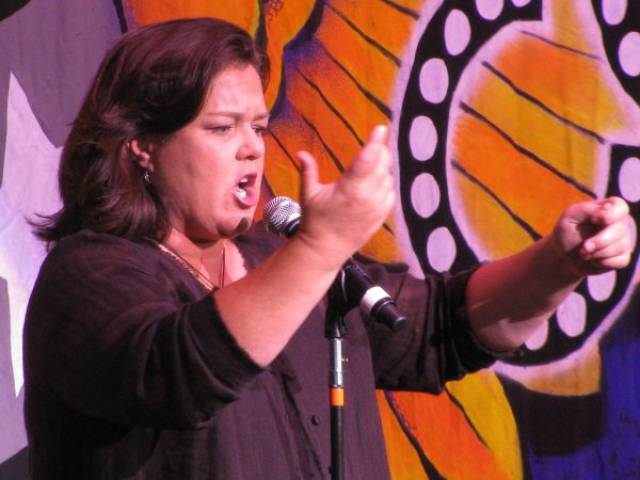 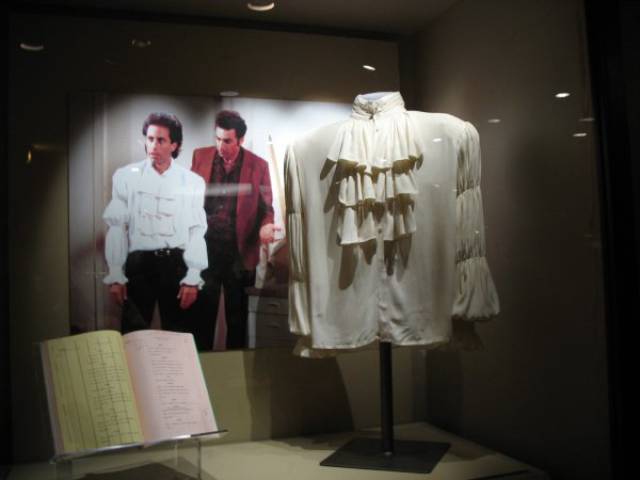 It was never Pitched to be “A show about nothing.”

During a 2014 Reddit AMA, Jerry Seinfeld admitted that both he and co-creator Larry David were surprised that the show earned its “show about nothing” moniker: “The pitch for the show, the real pitch, when Larry and I went to NBC in 1988, was we want to show how a comedian gets his material.” Seinfeld explained, “The show about nothing was just a joke in an episode many years later, and Larry and I to this day are surprised that it caught on as a way that people describe the show, because to us it’s the opposite of that.” 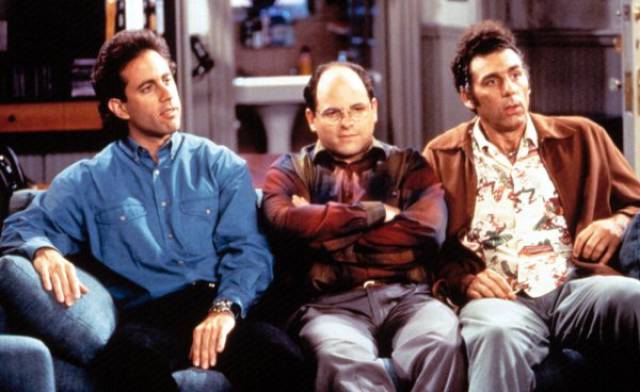 The episode titled ‘Contest’ was based on a real life bet that Larry David and Kenny Kramer had. It ended lasting for months, with Larry eventually outlasting Kenny. L.D. went on to say if he had to pick a favorite episode, ‘Contest’ would likely be his first choice.

Not that Jerry Seinfeld didn’t do alright without the 10th season, but still studios were baffled at the time when Seinfeld turned down the chance to earn $5 million per episode—a grand total of $110 million—to come back for a tenth season.

WitandWiticism 4 year s ago
#7 Don't forget, Jerry had an issue where he always had to feed everyone.
Reply