Meet The Real People Behind The World’s Most Popular Memes 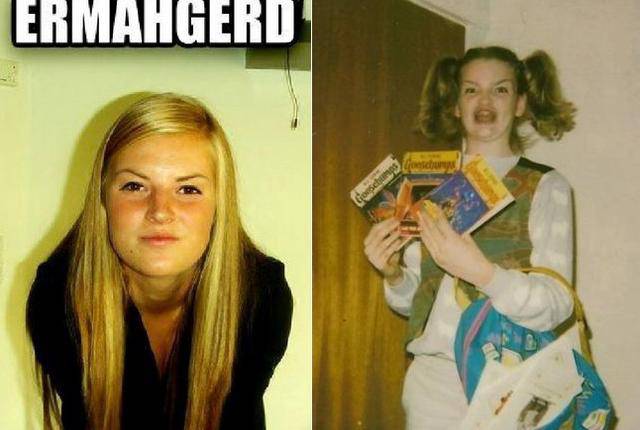 Ermahgerd Girl
The “Ermahgerd Girl” meme began when a 16-year-old kid from Canada was browsing a public Facebook photo gallery, and decided to post a weird photo that he saw on Reddit. Three years later, the Ermahgerd Girl was on a backpacking trip in India when one of her friends messaged her to let her know that she had become a meme. Now, Maggie Goldenberger, the Ermahgerd Girl, is a nurse in Phoenix, Arizona.

The woman behind the first world problems meme, Silvia Bottini, is an Italian born model and actress who’s been in a ton of commercials, and she even offers a public speaking course. She’s basically the perfect person to represent the First World Problems meme. 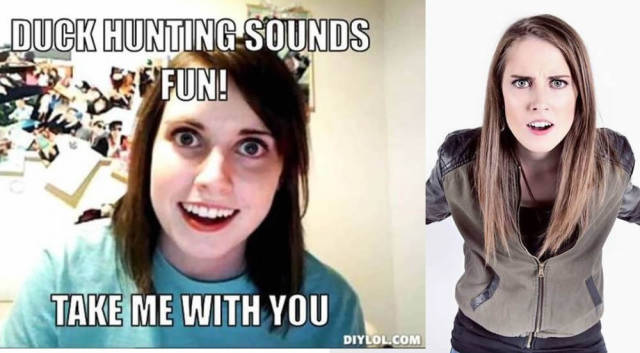 Because the Internet moves so fast, a lot of people don’t remember that the Overly Attached Girl meme was created to poke fun at the clingier aspects of Justin Bieber’s single “Boyfriend.” The original lyrics are a little creepy – “If I was your boyfriend, never let you go / Keep you on my arm girl, you’d never be alone.”

Lana Morris, a YouTuber, decided to do a parody song called “Girlfriend” in which she made fun of how incredibly clingy J. Biebs sounded in his song. A still from the newly dubbed “Overly Attached Girlfriend’s” YouTube video went viral in 2012, and never slowed down. Fortunately, Laina Morris has been able to capitalize on the meme and build a career around it. 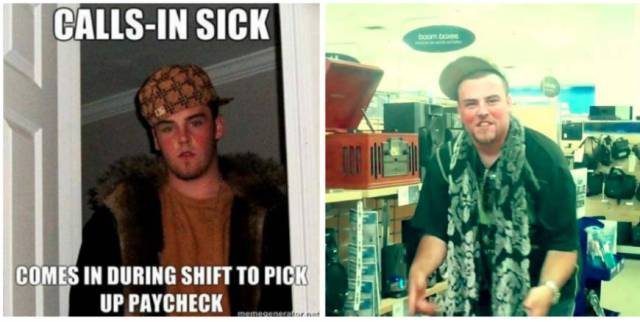 Steve, the meme everyone loves to hate, is actually named Blake Boston and really is kind of a scumbag. The original photo is from his mom’s 2006 Myspace page. According to Boston, he could have “stopped everything” going on with his photo being used by a meme, but didn’t want to seem “uncool.”

In other news that will surprise no one, the real Scumbag Steve is a not-so-great rapper. 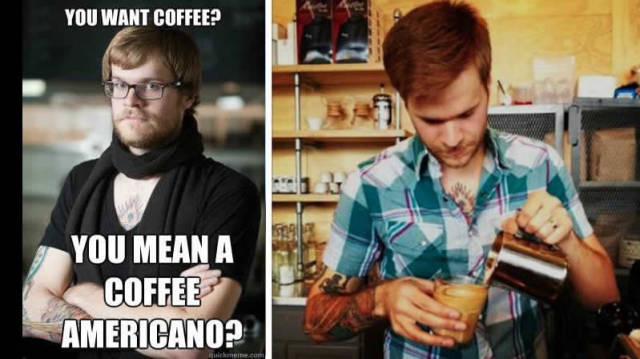 Dustin Mattson is still pretty angry about becoming a meme – which is funny, because of course the Hipster Barista would be mad about being turned into something so mainstream.

It turns out that Mattson is an actual hipster barista. He’s super unhappy about the fact that grown men who make latte art for a living aren’t taken more seriously. In an interview with the Atlanta Eater he said, “I do find it discouraging and disappointing that there was so much exposure brought to an attempt at making a joke of a culinary industry and the professional barista. To me, it’s very telling on how we laud farm-to-table food, craft beer, cocktail mixology, but it’s ok to have no respect for the specialty coffee world and the people who are committed to it.” Somehow, this quote made his face ten times more punchable. 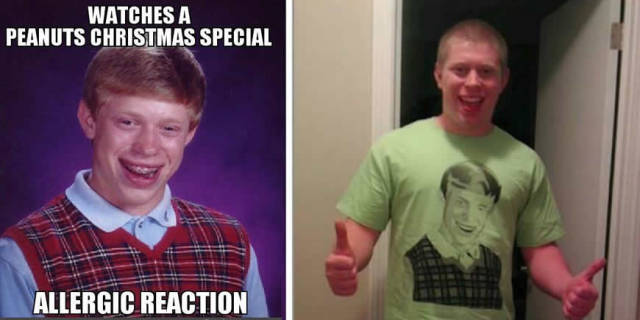 When Kyle Craven’s friend posted a yearbook outtake photo of his to Reddit, things got very real, very quickly. The photo in question was actually taken as a joke. In an interview with the Washington Post, Kyle said that “Picture days were always fun days for me,” and that he rubbed his face to make it red, squinted his eyes, puffed out his jaw and took what he thought would be a funny photo. Little did he know that a goof like that would make him Internet famous a few years later. 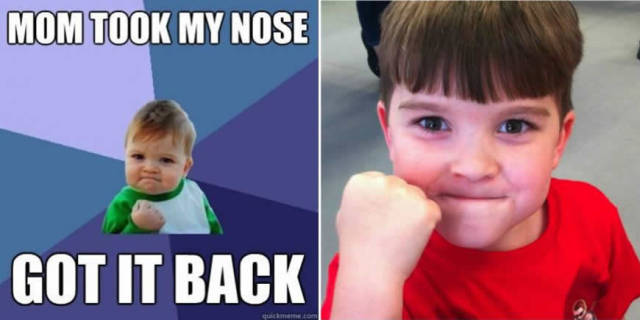 When a photo of Laney Griner’s son Sammy became one of the most popular web memes ever, she wasn’t happy. But a few years later, she used the unwanted popularity of the meme to help raise $100,000 for her husband’s dialysis, and to pay for his kidney transplant. See? The Internet isn’t all bad. 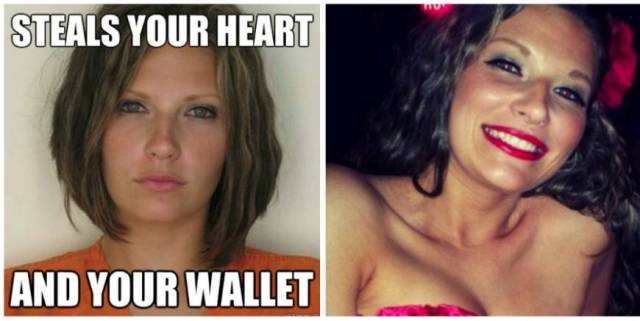 In 2010, Meagan Mccullough was arrested for a DUI. Three years later, her mugshot made its way to Reddit, where basement-dwellers the world over fell in love with her stunning good looks. A bunch of dudes contacted Mccullough, and professed their undying devotion to her. However, this hot criminal is kind of over that mugshot photo. She even said, “I don’t think it’s that good a picture – there are other ones I would prefer.” 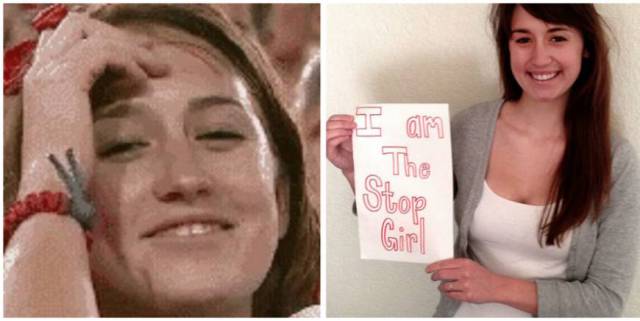 The “Stop Girl” meme all started at a college football game. During a 2010 game between the University of Arizona and Iowa, Sarah – the student who would soon become Stop Girl – had a camera trained on her as she watched the game in agony. Her request that the camera man stop filming her lead to a bunch of weirdos on Reddit falling in love with her. Sarah is understandably weirded out by the whole thing, and hopes that she can put the Internet’s fascination with her in the rearview. 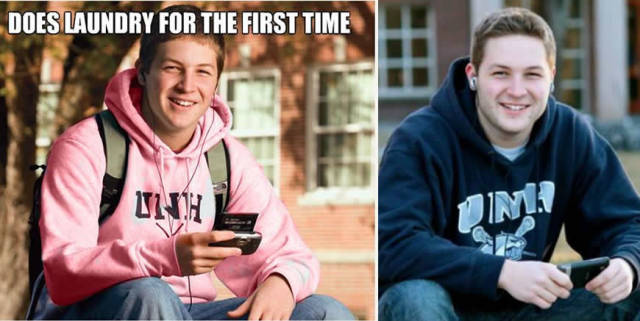 The guy behind the “College Freshman” meme is named Griffin Kiritsy, and he’s totally on board with the Internet making fun of him. According to Kiritsy’s blog, the photos were taken by a Reader’s Digest photographer for an interview he gave to the magazine. 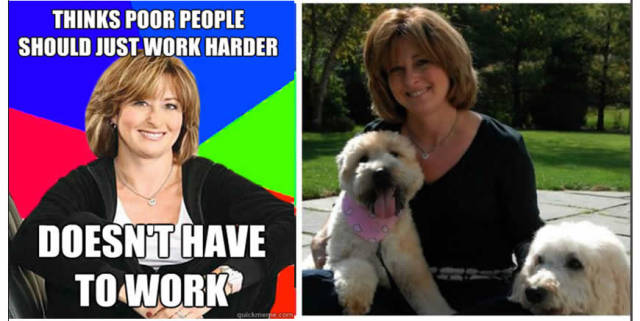 Carly Phillips was already sort of famous. You probably don’t know her name, but she’s made a mint writing the romance novels that you pass every day in the grocery store and the airport. Although at first she didn’t really understand meme culture, she has now accepted this part of her life. In an interview with the Daily Dot she said, “I do think I’m rational and reasonable and I appreciated the people who took the time to explain – and I learned something in the process,” Phillips said. “Once I ‘got that,’ well, I mentally and emotionally let it go.” 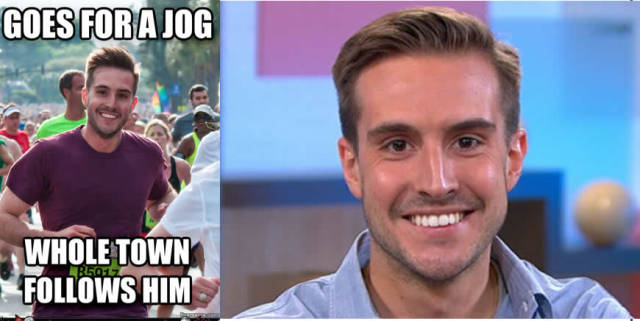 If the most beautiful thing you’ve ever seen in your life is watermelon inside of another watermelon, then you just might be Chaz Smith, a student at Penn State who went viral in 2013 while losing his mind over a watermelon on Vine. Recently, Chaz (who’s majoring in Cinema Studies) began working on short films to help survivors of sexual assault. 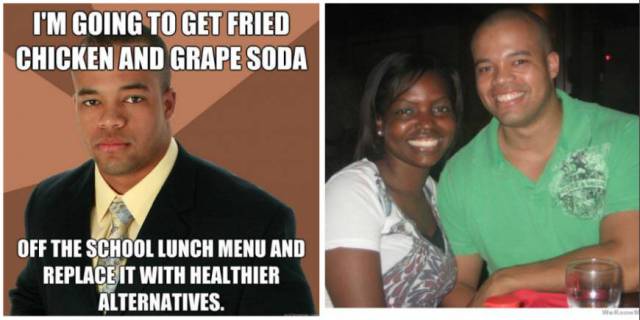 According to the kind folks on Reddit, the guy featured in the “Successful Black Man” meme is actually an electrical engineer who lives in Texas and works for General Electric. He has also competed in several body building competitions. 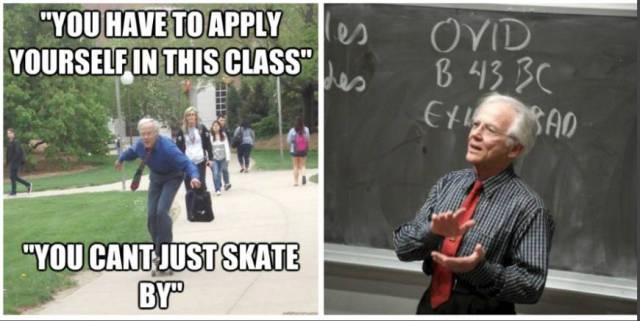 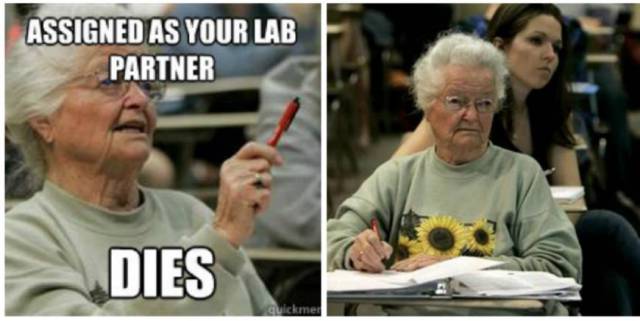 Nola Ochs is not only the Guinness Book of World Records holder for being the oldest college graduate, but she’s also incredibly inspiring. After graduating, she was hired by Princess Cruises as a guest lecturer on a 9 day Caribbean cruise. Then, after helping her family with their wheat harvest, she returned to Fort Hays State University to earn her Masters Degree.

Despite seeming like the portrait of a child arsonist, “Disaster Girl” actually has fairly normal origins. In 2004, the girl and her dad, Dave Roth, were watching their local fire department perform a training exercise, and Roth snapped a perfectly timed picture. Even though Disaster Girl has grown up into a Disaster Young Woman, she still gives us the creeps. 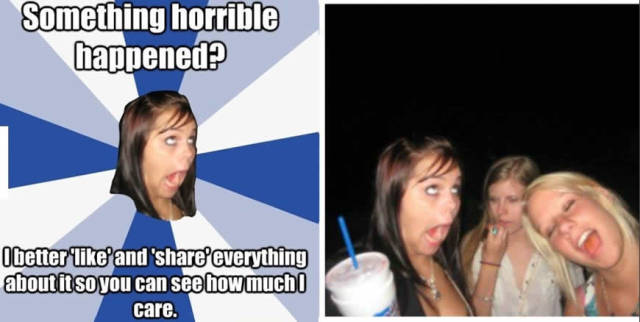 We’ve all seen the “Annoying Facebook Girl” meme, but you probably never realized that there was a real person behind that crazy face. Fortunately for Internet lurkers everywhere, there’s an ongoing debate about who this person is. Obviously the debate about “Jess,” the annoying Facebook girl, began on Reddit but it has since spilled over into other areas of the Internet. 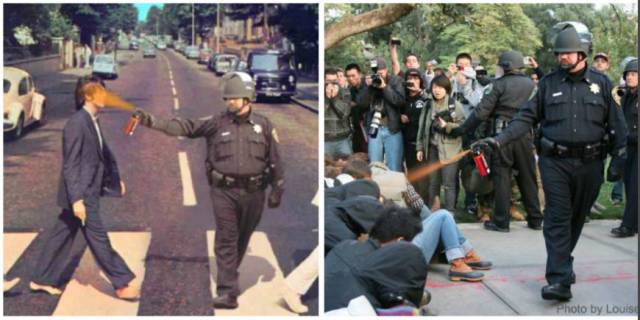 After casually pepper spraying a group of UC Davis students at point blank range, Lt. John Pike was fired from his job – but not before he became a meme. Not only did this photo of Lt. Pike pepper spraying innocent students become a meme, it also began a conversation about the appropriate use of force by police.

In 2004, a story about a Chinese man named Jim Feng who sued his wife for bearing unattractive children was published. Feng was “horrified” when his wife gave birth to an ugly daughter, and was convinced that she’d had an affair. Feng’s wife confessed that she had actually had around £70,000 worth of plastic surgery before they met. He divorced her and sued her for £55,000.

Taiwanese model, Hiedi Yeh, posed for this photo, believing it to be for a print cosmetics ad. Instead, the photo was published as an ad for plastic surgery with the tagline, “The only thing you’ll ever have to worry about is how to tell the kids,” implying that both parents have had extensive plastic surgery to make them look more attractive. The meme blew up, and now, Yeh is trying to sue the original posters for defamation. 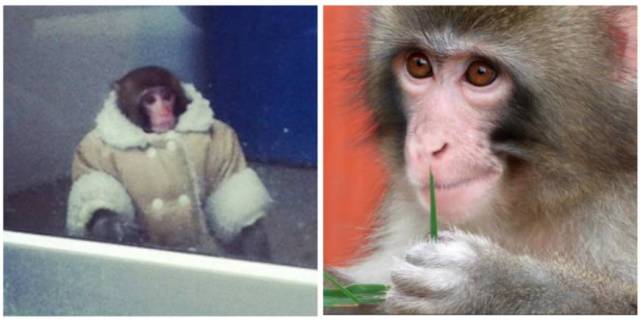 The Ikea Monkey took the world by storm in 2012, when he was photographed wearing a nice, warm overcoat, just hanging out inside of the infamous Swedish furniture store. Today, his name is Darwin, and he lives at the Story Book Farm Primate Sanctuary. According to Diana Liepa, Darwin’s handler at the Sanctuary, he “loves being outdoors,” and is bursting with constant energy. 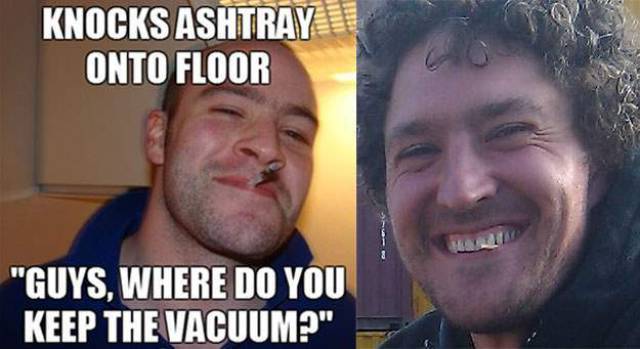 Good Guy Greg, as he’s known, got his start on 4chan and quickly became quite famous. He’s supposedly a commercial fisherman, but even that’s under dispute. You can see for yourself by checking out the Reddit thread.

The original photo was submitted to the Australia Associated Press who was covering the Schoolies festival in Australia. On November 23rd, 2011, Redditor NorthernSkeptic submitted a post titled “Introducing Sudden Clarity Clarence” that included an image macro with the caption “Oh my God / dubstep sucks.” The rest is history.

The photo you see was taken at the Museum of Natural Sciences in Raleigh, North Carolina, by Jarod Knoten. The original photo below shows the father Dave with his son Mason. The photo was then submitted to Reddit where it spread like wildfire.