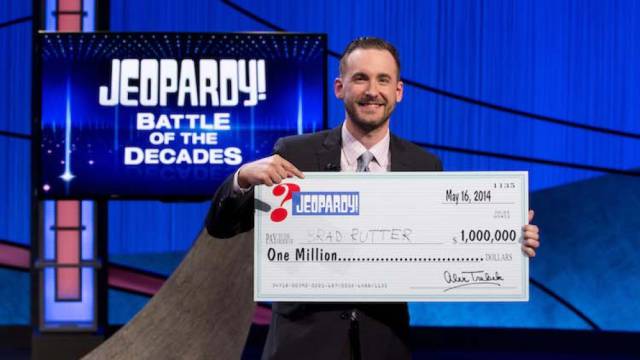 Brad Rutter is the biggest all-time winner on a game show in television game show history. The only time he lost was during an exhibition match that didn’t count towards his record because the competitors were facing each other, as well as an IBM computer.

Brad graduated from Manheim Township High School in Neffsville, Pennsylvania. He was a champion contestant on the high school Quiz Bowl team and even made it into the Hall of Fame. After high school he went to Johns Hopkins University where he pursued a degree in the Liberal Arts, until he grew bored, dropped out, and worked at a local music store. On a whim he applied to be a contestant on Jeopardy!. He made the cut and his first appearance was in October of 2000. He began a winning streak that would reach $4,455,102! He won the most games and appeared on all the special tournament games. Brad’s last appearance on Jeopardy! was in 2014 on ‘Battle of the Decades’, where he took home the top prize of another $1,000,000, which combined with his previous winnings for the title of biggest game show winner in history.

His Final Jeopardy Battle of the Decades answer: “Serving 160 years apart, these two secretaries of state are the only ones who never married.” His correct response: “Who are Buchanan and Rice?”