If You’re A Foodie, You Should Definitely Visit These Cities (30 pics)

Here are the 30 best cities around the world for everyone who enjoys good food.

BANGKOK: Endless street stalls can be found with familiar dishes like pad thai, which Thip Samai on Mahachai Road is known for. In the last few years, there have also been a growing number of pop-up restaurants, where chefs organize set dinners at fixed prices based on various themes. 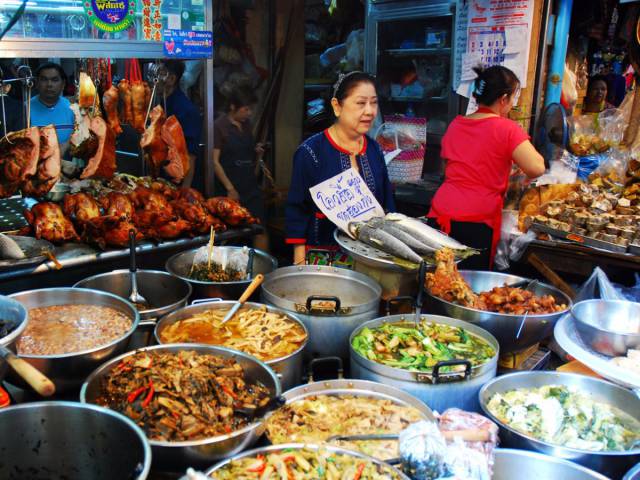 BARCELONA: You can help yourself to an abundance of cured pork, Serrano ham, and cold cuts from inland Catalonia, but you could also get fresh fish from the Mediterranean Sea. Sample traditional Catalan cooking in areas like the Barri Gòtic quarter, indulge in tapas at popular stops like Cal Pep, and explore the Boqueria market for stalls of fresh produce and treats. 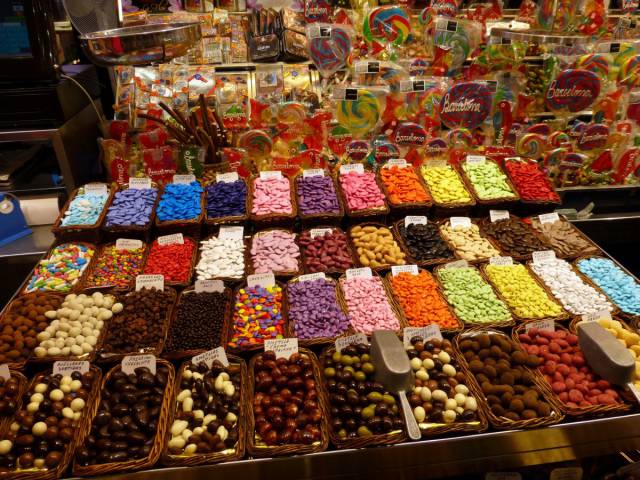 BOLOGNA: Head to the city that invented Tagliatelle al Ragu, which consists of ribbons of pasta smothered in a hearty meat sauce. Wander through the family-owned artisan shops in Quadrilatero, or taste a variety of fresh cheese and mortadella at the Mercato di Mezzo market. 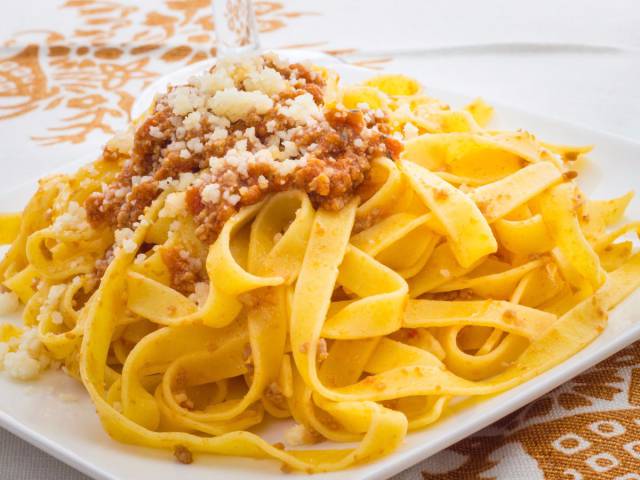 BRUGES: From succulent plates of mussels and crisp french fries to fluffy waffles and delectable chocolate, Bruges is a food paradise waiting to be explored. Head to the Chocolate Line, where chef Dominique Person uses everything from wasabi and guacamole to chicken and oysters in his chocolates. 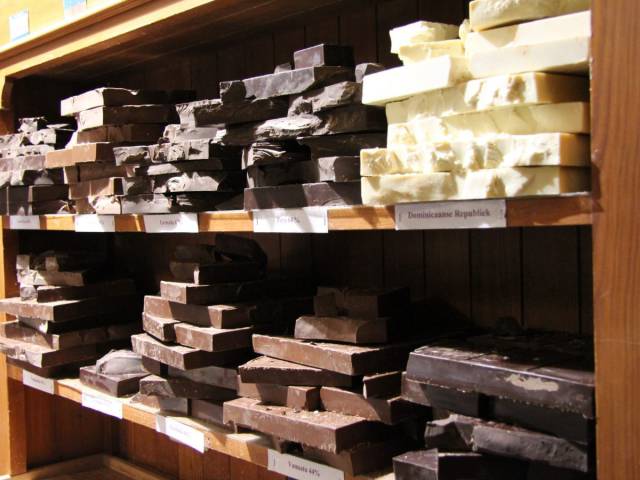 BUENOS AIRES: In Buenos Aires, you can indulge in juicy grass-fed steaks, multi-course chef's tasting menus, and quality wines for under $30. Its parrilladas (grills) are famous for their tender steaks and meats, but Buenos Aires is also home to a large underground food scene where high-end chefs prepare meals for diners in their homes. 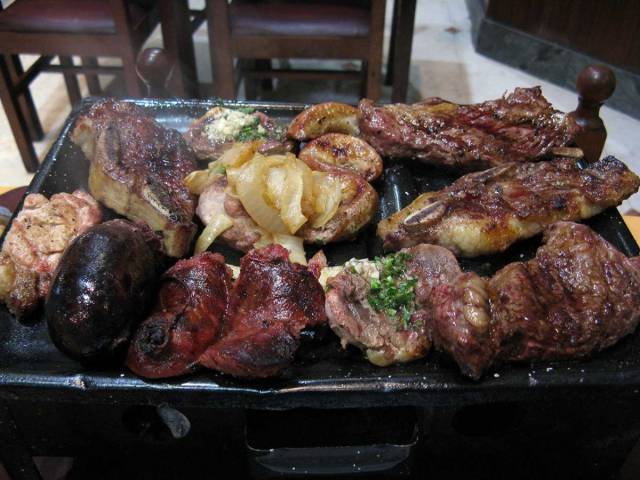 CHARLESTON: With plenty of top-notch restaurants that serve locally-sourced dishes, Charleston is a haven for food lovers. Examples include Husk, where chef Sean Brock's motto is, "If it doesn't come from the South, it's not coming through the door," and Fig, where minimal preparation is used to show off ingredients like black bass and fresh flounder. 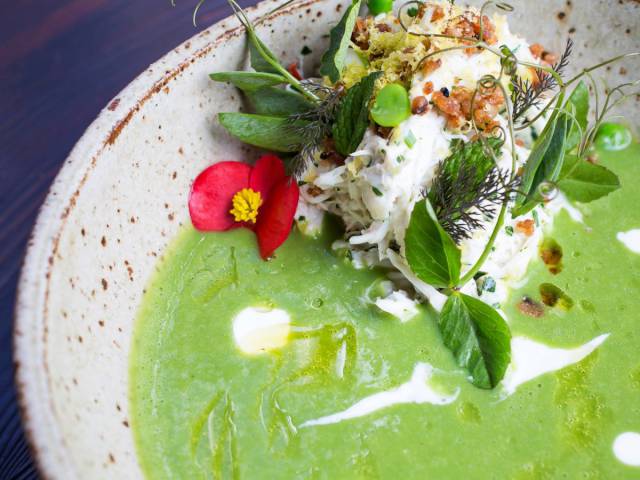 CHICAGO: Chicago may be the home of deep dish pizza and has fabulous varieties to offer at spots like Lou Malnati’s Pizzeria, but it’s also got plenty of other delicious dishes to offer. The city is home to an impressive BBQ scene and hosts high-end restaurants like Acadia, where dishes like pork belly or golden snapper are served in playful presentations. 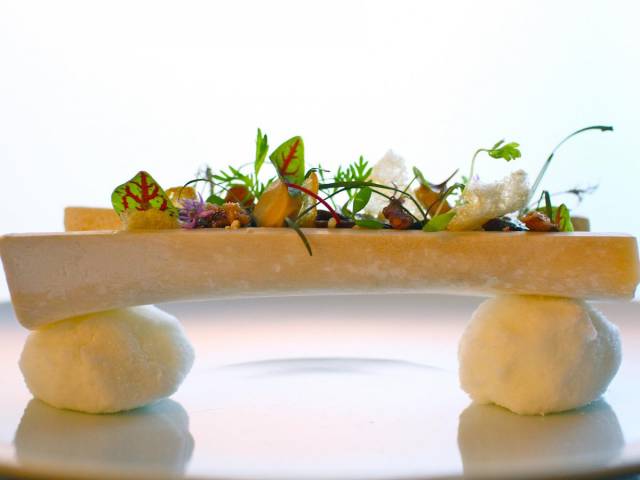 ENSENADA: The Ensenada market made waves with its fish tacos when it opened in 1958, and the dish remained one of the area's most famed bites. Today you'll find stands all around the Mexican city, serving up the iconic combination of fried fish and shrimp smothered in mayo, salsa, and fresh cabbage. 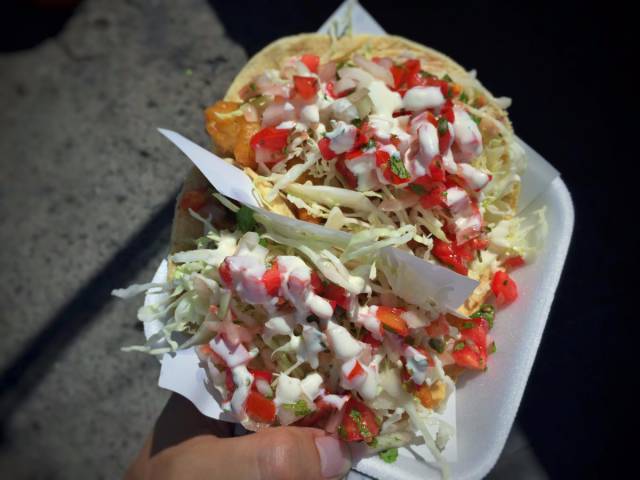 GEORGE TOWN, PENANG, MALAYSIA: Penang is home to a mix of traditional Malay, Chinese, and Indian dishes with cooking methods that date back hundreds of years. Its hawker centers in George Town are filled with tasty fried treats and delectable varieties of soups that range from pork and duck with anise to mackerel-chili soup. 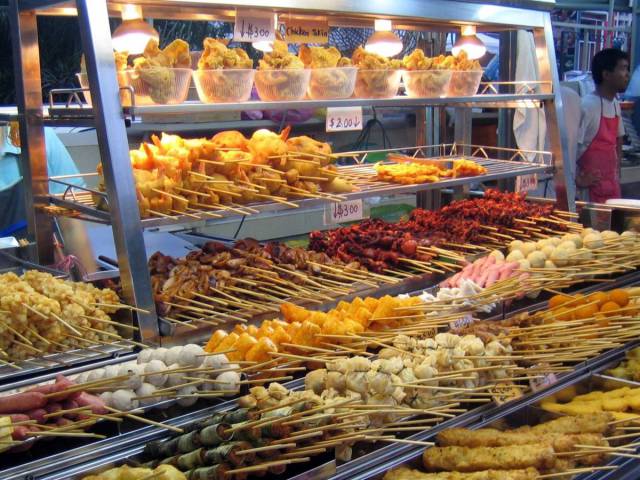 HO CHI MINH CITY: The southern Vietnamese city is famous for its delectable varieties of bánh mì — a French-inspired sandwich consisting of a baguette filled with meats and topped with fresh vegetables, daikon and carrot pickles, cilantro, and various sauces. Head to Banh Mi Huynh Hoa to sample one before trying the extensive menu at Cuc Gach Quan, which is located in a French colonial home. 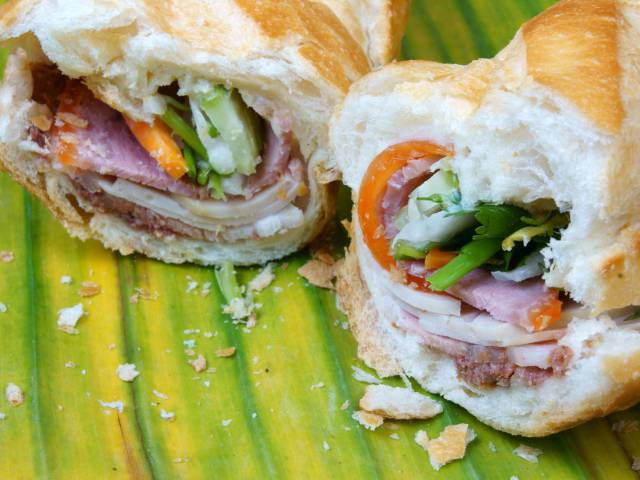 HONG KONG: Popular foods here include dim sum, roasted meats (like goose), and seafood varieties like soft-shell crab. Head to a traditional cha chaan teng restaurant for a cup of milk tea — black tea served with creamy milk — and a pineapple bun — a roll-like bun topped with a sweet and crusty pastry. 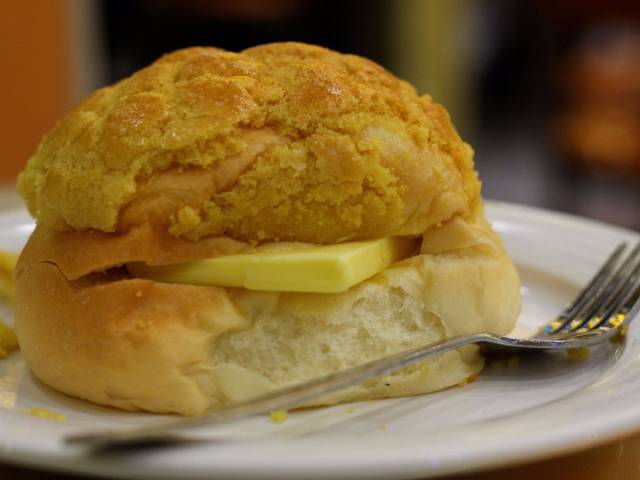 LIMA: This Peruvian city is home to a wildly diverse food scene, with dishes that include causas — mashed potatoes stuffed with various delectable fillings — and Conchitas a la Parmesana — fresh scallops topped with melted Parmesan and lime. A must-try here is the ceviche, which includes incredibly fresh fish marinated in a mix of salt, red onions, chili peppers, and lime juice. 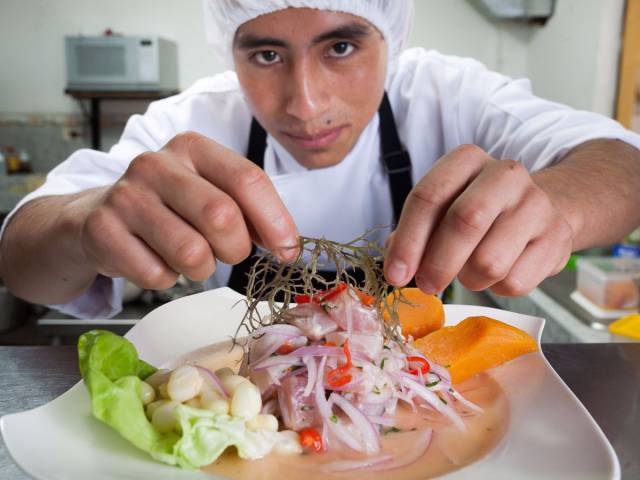 LOS ANGELES: This is where chef Roy Choi started the Kogi food truck, which marked the beginning of a thriving food-truck scene in the city. LA offers everything from fresh seafood choices on the pier of Venice Beach to posh restaurants and top-notch Mexican, Korean, and sushi, courtesy of its diverse population. 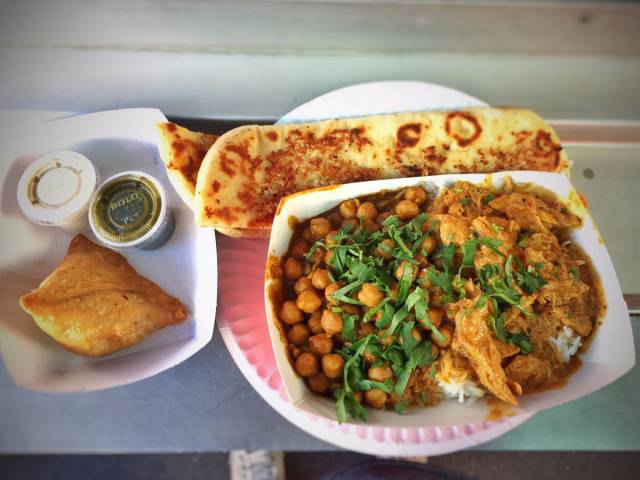 LYON: According to The Guardian, Lyon has been the gastronomic capital of France and of the world for the past 76 years. In Lyon, you'll find eclectic dishes such as pig's brain dressed in pork vinaigrette, and quaint markets like the Quai Saint-Antoine and the Les Halles de Paul Bocuse. 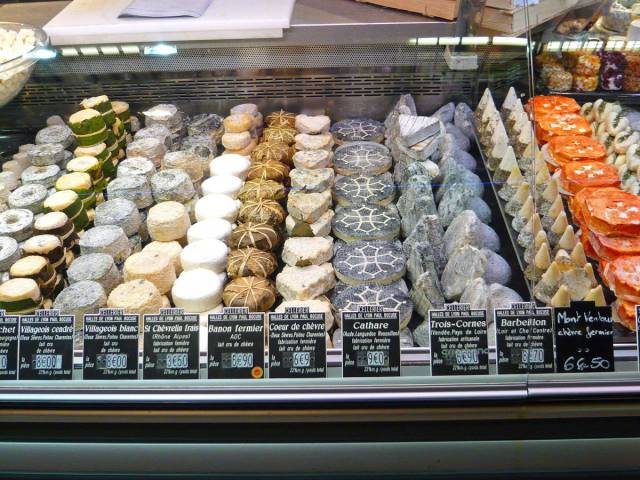 MARRAKESH: This Moroccan city combines the flavors of France, Africa, and the Middle East to offer food stalls where you can taste on-the-go bites such as kefta (Moroccan meatballs) and merguez (spicy sausages) in the day. At night, dine at stunning restaurants like Dar Moha, set in Pierre Balmain's former residence. 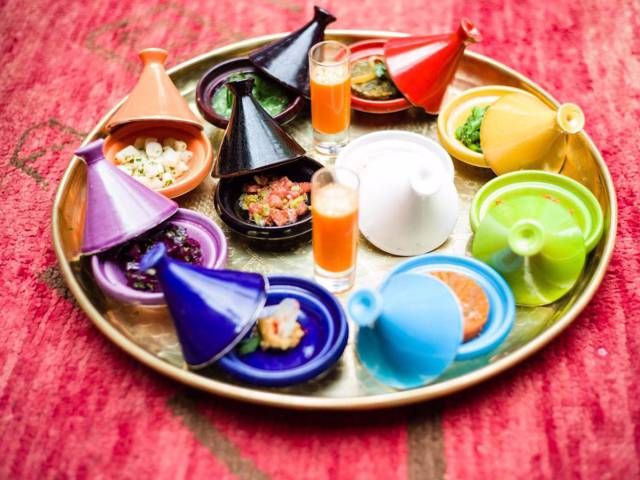 MEXICO CITY: Mexico City is famous for its street food, especially when it comes to tacos al pastor — thin slices of pork that are shaved onto tortillas before being topped with onions, cilantro, pineapple, and salsa. Besides the street eats, the city is also home to creative chefs pushing the boundaries at restaurants like Pujol, where everything from flying ants and suckling pig are used for dishes. 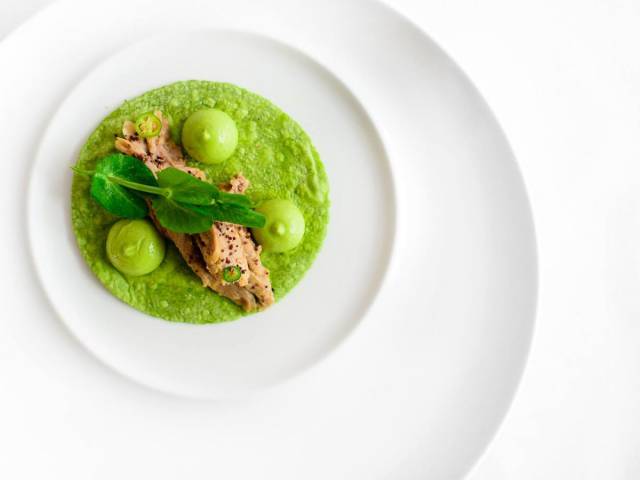 NEW ORLEANS: New Orleans is known for its delectable Creole dishes. Try a po boy sandwich, sample a fresh hot beignet at Cafe du Monde, or head to one of the oldest restaurants in America, Antoine's, where oysters Rockefeller were invented. 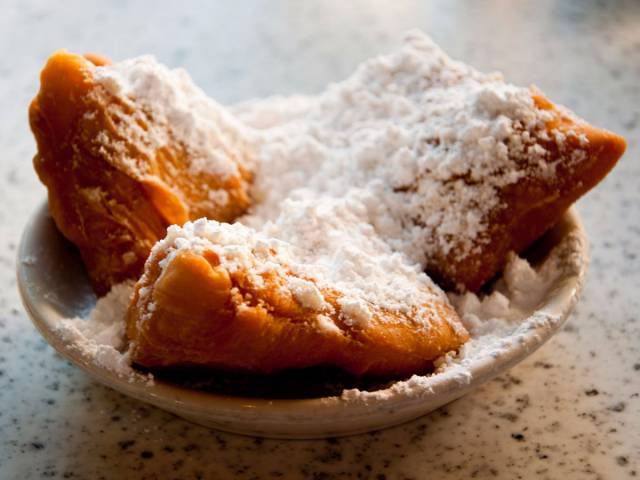 NEW YORK CITY: Here you'll find one of the most diverse food scenes in the world: there's everything from Italian and French to Afghan and Tibetan cuisine. Try one of its many Michelin-starred restaurants, grab a hot dog or halal platter from a street vendor, or check out one of its food markets, like Smorgasburg. 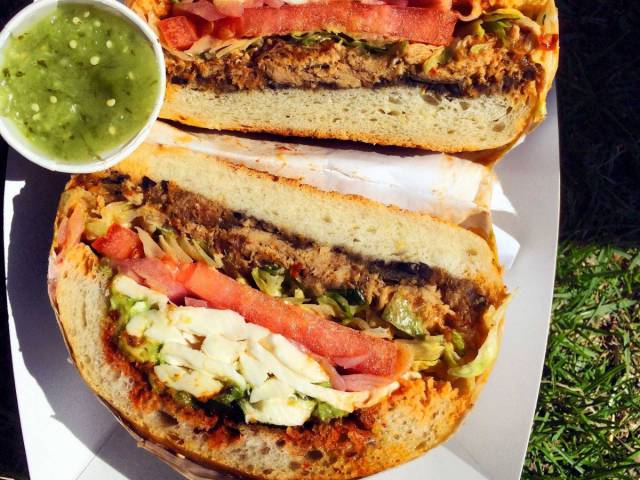 PARIS: Weekend markets like the Bastille market and the Place Monge Market bring in an array of authentic French cheese and sweets to taste. Head to one of the brasseries outside of the tourist centers for traditional dishes like quiche and coq au vin, or indulge in one of the city's many acclaimed restaurants like L'Atelier de Joël Robuchon. 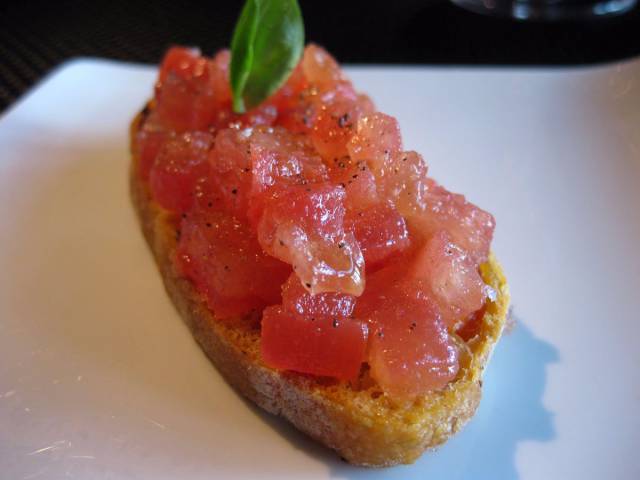 PORTLAND: This Pacific Northwest city is known for its thriving food-truck scene. Some tasty options include Pok Pok, where you can sink your teeth into some of the most succulent chicken wings; Bunk Sandwiches, where you can get a flavor-filled pork belly Cuban sandwich, and Miss Kate's Southern Kitchen, where you'll find delectable southern dishes. 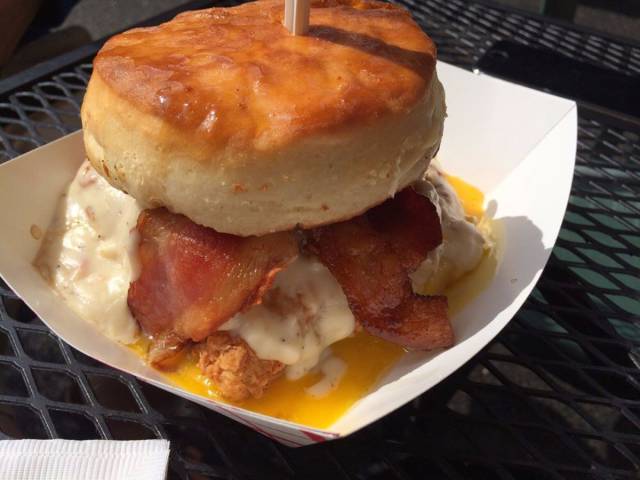 SAN DIEGO: San Diego is one of the top places for Mexican food in the US. Head to Lucha Libre and try the Surfing California burrito, which is filled with grilled steak, shrimp, fresh french fries, avocado, pico de gallo, cheese, and chipotle sauce. It once made an appearance on "Man vs. Food." 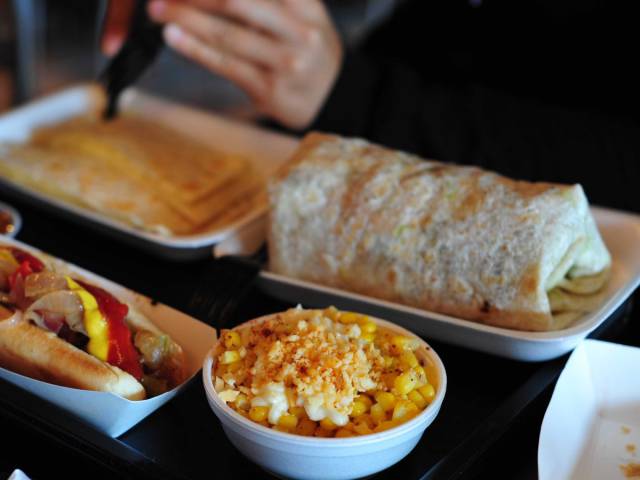 SAN FRANCISCO:  The city by the bay is home to a plethora of dining destinations, like the three-Michelin-starred restaurants Benu and Saison. The city also has tasty cheap eats at spots like the Ferry Building Marketplace, where vendors offer everything from wild mushrooms to freshly cured salamis. 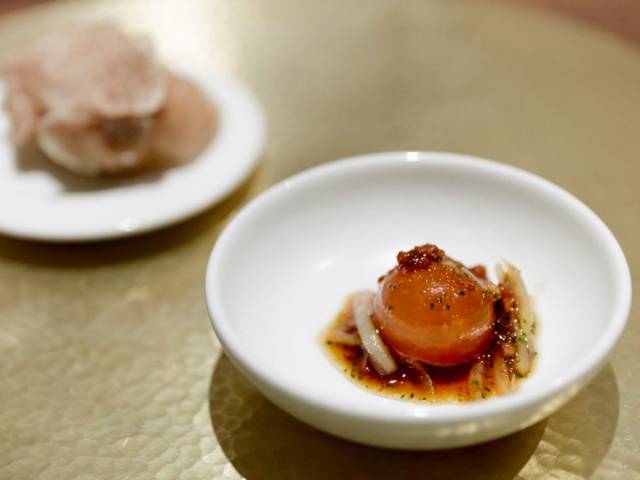 SAN SEBASTIAN: Besides its trio of restaurants with three Michelin stars, the Spanish coastal destination is known for its markets, its Basque-style tapas, and its cutting-edge dishes such as foie gras with figs. 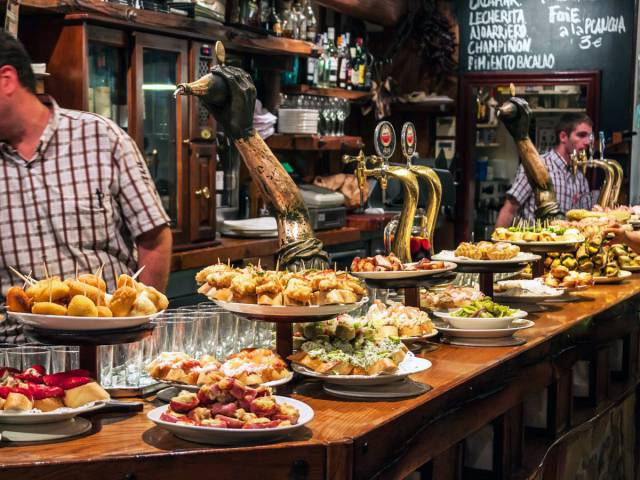 SÃO PAULO: São Paulo has long had a tradition of outstanding cuisine, but over the years it has also been fusing the traditions of Italian, Japanese, and Lebanese populations with those of Brazil. Bar do Mané — a market hall hosting one of the city's largest produce and food markets — is best known for its epic-size sandwiches of grilled mortadella and melted cheese. 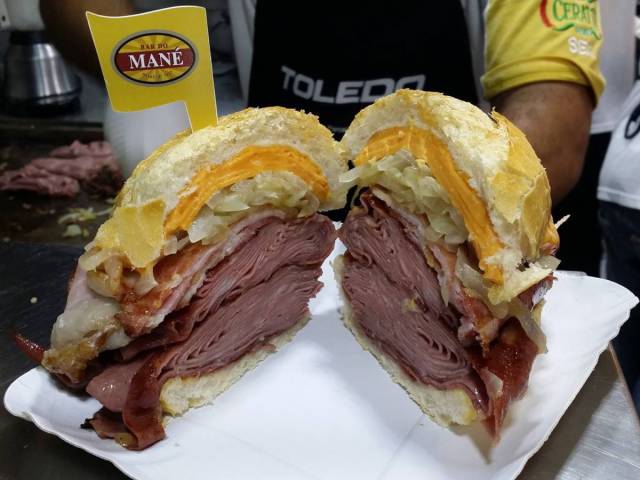 SEATTLE: Start off by heading to one of Seattle's prized food markets, like Pike Place Market, before wandering over to Pioneer Square for fresh oysters. Afterwards, grab some prime coffee and warm biscuits at the specialty market at London Plane, or catch a late-night coffee with a movie screening at Zeitgeist. 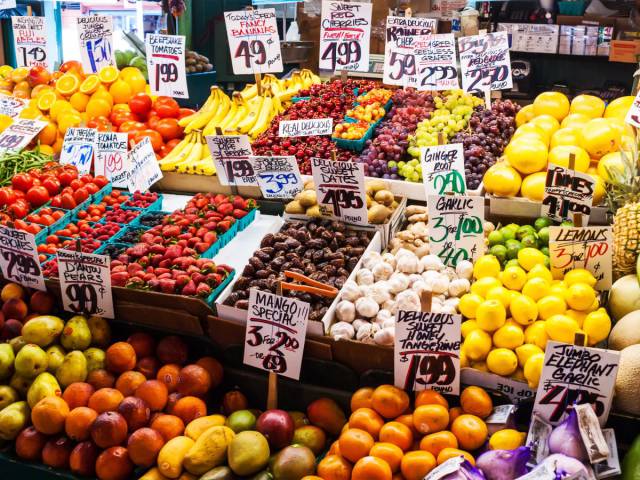 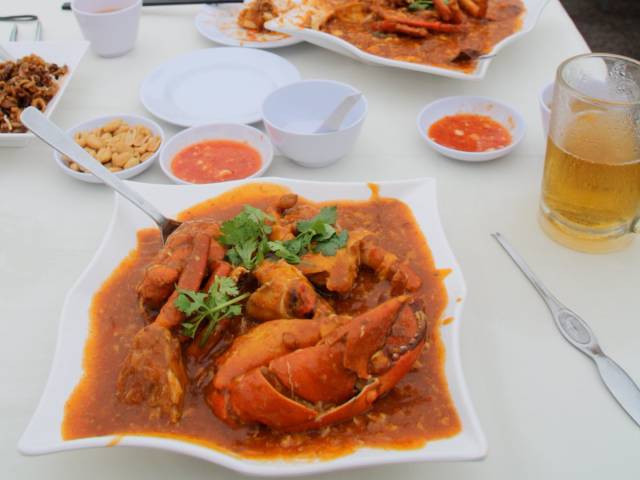 SYDNEY: Sample regional meats such as crocodile and kangaroo grilled to perfection, try the city's bountiful seafood at the Sydney Fish Market, and sample the growing array of Malaysian cuisine at places like Mamak. 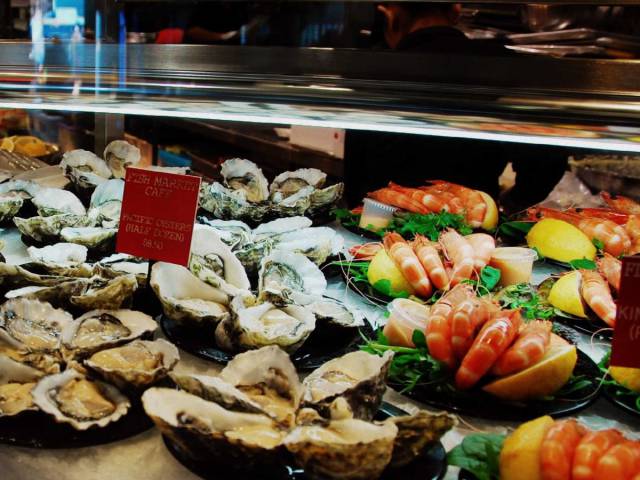 TAIPEI: According to The Guardian, Taiwan is the world's best destination for street-food markets, and Taipei is where some of the best reside. Here you'll find night markets that abound with everything from candied fruit to popcorn chicken. The area's desserts are particularly special, with delicacies that include squid-ink bread and breads made with a pineapple crust. 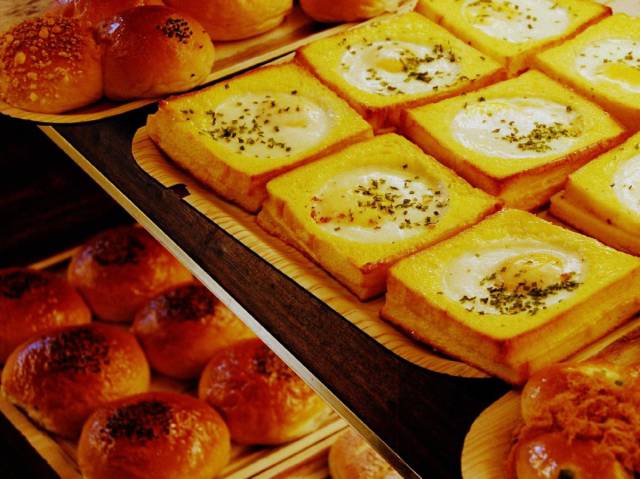 TEL AVIV: In Tel Aviv, most eateries are farm-to-table with locally grown, fresh produce and vegetables. The city also has a unique cafe culture, where it's not uncommon to sit in an open-air restaurant for long hours while you sample bowls of salads, fresh vegetables, pickled onions, and roasted red peppers all before indulging in your main entrée. 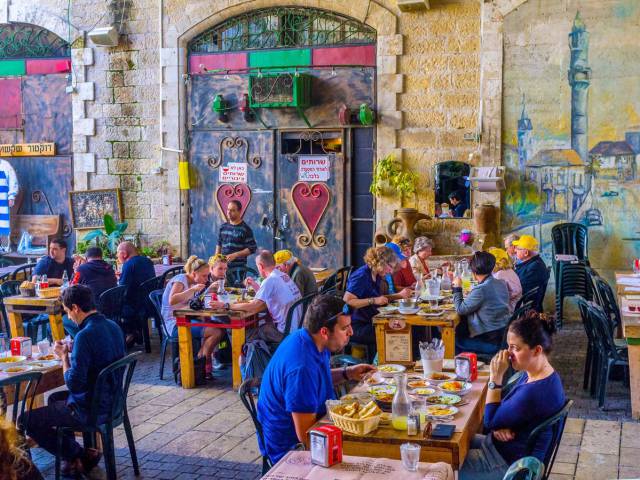 TOKYO: Home to more than 200 Michelin-starred restaurants, Tokyo is a go-to destination for those in search of prime fine dining. While there, be sure to sample some of the best sushi in the world at Sukiyabashi Jiro, the famed sushi restaurant from the documentary "Jiro Dreams of Sushi." 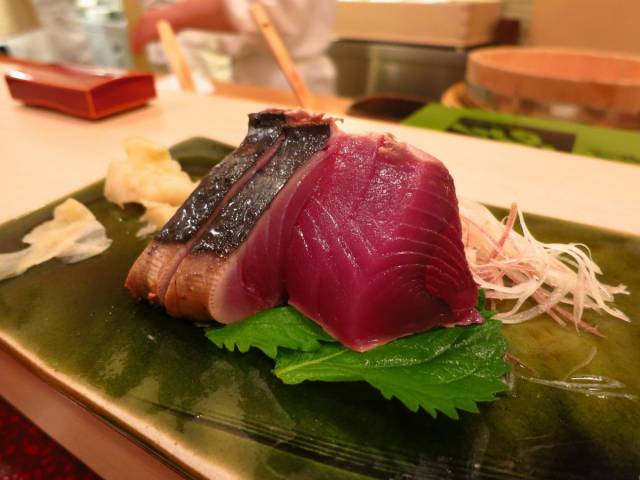