“I’m a tax consultant at a big-four accounting firm.” 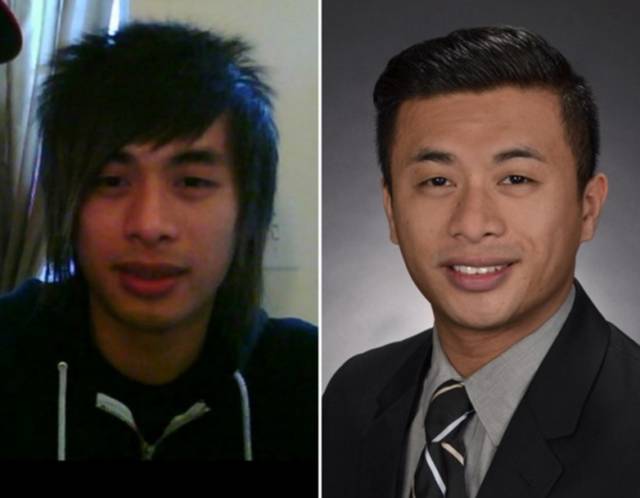 “I still listen to screamo on a regular basis”.

“Back then I always wanted to work in the music industry…and now I do!”

“I’m definitely nowhere near as emo as I used to be! And I also embraced my natural hair and stopped trying to straighten and dye it to death. I’m the marketing manager for a ticketing company in Seattle and it’s my job to go to events, meet with event producers, and help them promote while doing their ticketing.”

“I joined a sorority and got a degree in special education.” 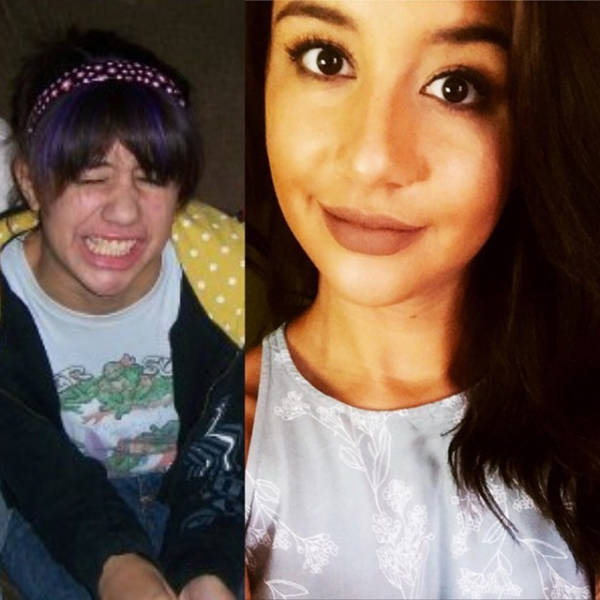 “I recently taught a student who is going through her emo ‘phase’. That ‘phase’ helped me connect with that kid in the classroom and she knew that I was a safe teacher to come to. I still listen to my emo music as a guilty pleasure, but I am glad that I’m over the look.”

“My oldest is four, and we occasionally will turn up the music and she’ll dance like my former scene-kid self. Not going to lie, I’d still be at Warped Tour if there was on-site childcare. I don’t think my emo side will ever fully fade.”

“I’m an award-winning baker, I breed and raise aquatic snails, and work in a spa.” 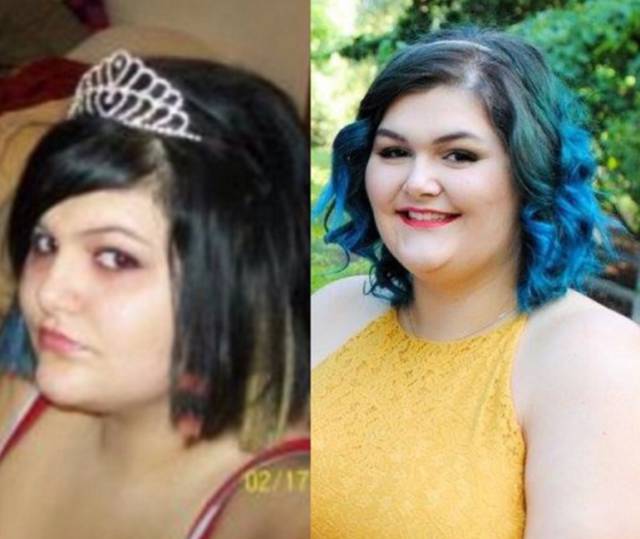 “I’m also working my way towards a career in massage therapy, and on top of that, I’m planning a wedding to my love of five years!”

“I’m married and a hairstylist”. 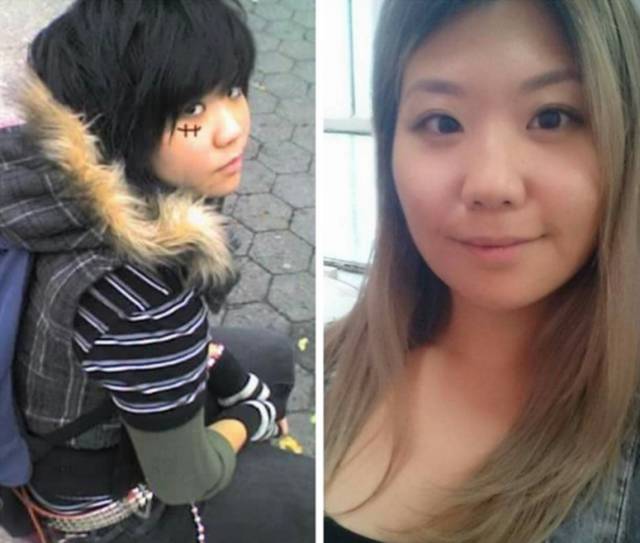 “I used to listen to bratcore and AFI in Union Square while hanging out with other emo kids. I’m not embarrassed about the occasional pictures popping up as a reminder, only the fact that I was wearing fingerless gloves in middle of August.” 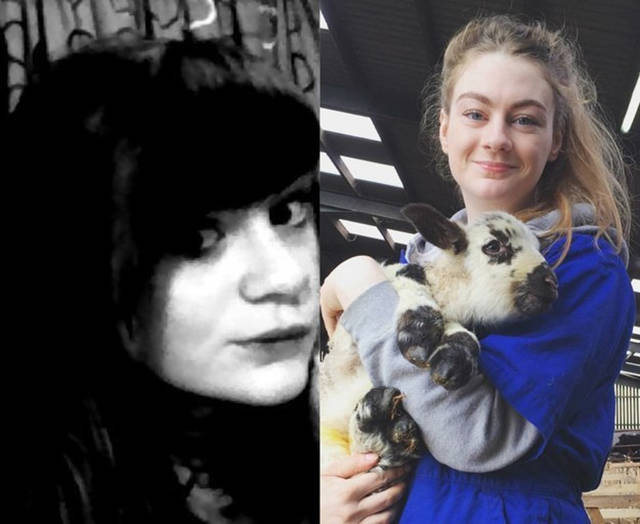 “I used to cut my own hair into that cool side fringe and was a big fan of the overexposed black and white selfie. Now I even let other people cut my hair for me.”

“I’m about to graduate from the University of Michigan with a degree in movement science, with a concentration in biomechanics.” 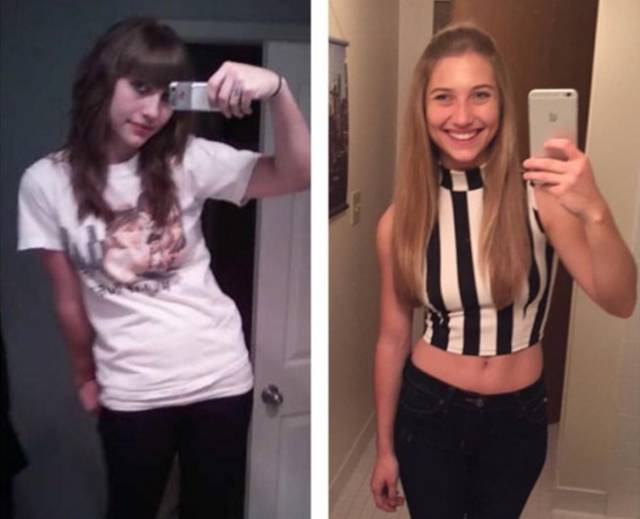 “While there I joined an amazing Panhellenic sorority, something I never thought I would do in my freshmen year of high school. I also am currently training for my first marathon! But don’t worry, my iPod is still filled with La Dispute, Silverstein, A Skylight Drive, and of course, Escape the Fate.”

“I’m a mom of three wonderful children while currently pursuing my degree in computer science and working full time at a tech start-up.” 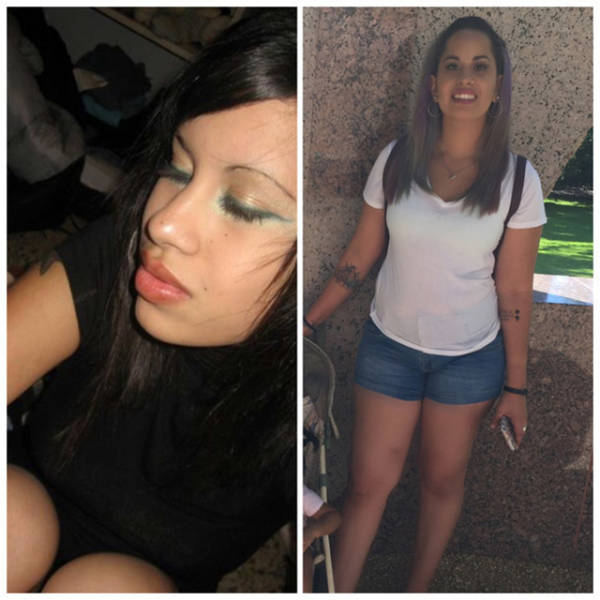 “There’s still a little scene kid in me, hence the purple hair, piercings, and tattoos. Really I’m a bit of a nerd and a big kid doing big things with wonderful children.”

“I’m definitely different, but I’d be lying if I said I didn’t have dance parties with my son to My Chemical Romance and The Used.”

“I live in Chicago with my cats and work as a graphic designer.” 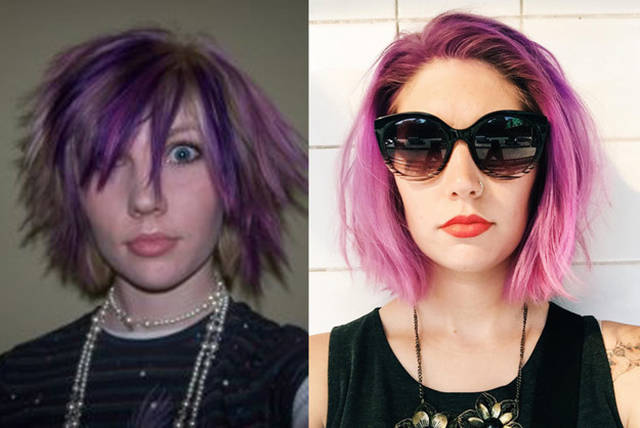 “I still love dying my hair, wearing my Vans or Chuck Taylors, and blasting Alkaline Trio in my headphones, though! So, I would say I didn’t leave my emo days too far behind.”

“All that hair and makeup practice back then really helped me become the hairstylist and makeup artist that I am today!” 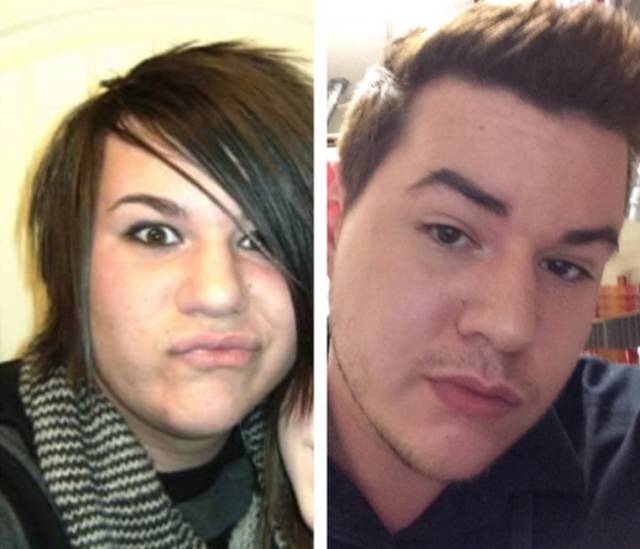 “Now I’ve pretty much left all my emo qualities behind… Well, maybe not all of them.”

“Even though I got a grown-up job at a bank I never compromised my emo style!” 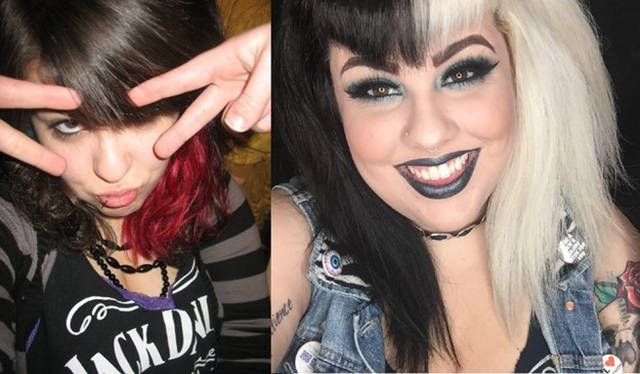 “Eight years later and I’m still wearing the exact same Jack Daniel’s shirt!! Not much has changed at all; I still go to metal shows all the time and still constantly dye my hair different colours using Manic Panic.”

“I’m bartending now instead of working at Hot Topic, and just enjoying my life in the big ol’ city of Chicago.” 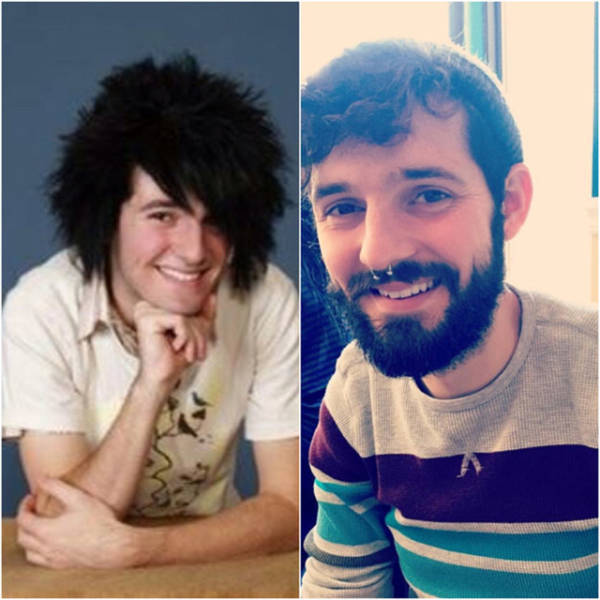 “I went by “Adam Bullet” for most of my days and still use that user name now. And yes, that is my senior picture. I’m now 28 years old. I stopped straightening my hair, finally let my curls go, and took out my snakebites.”

“Here I am doing a seminar on goals and failure.” 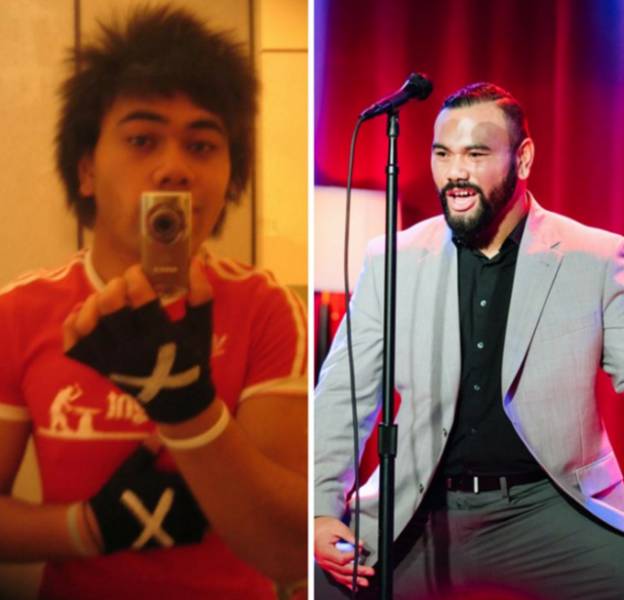 “On the left is me circa 2007; listening to AFI, Saosin, From First to Last, etc., and firmly showing my straight-edge X on my popular fingerless gloves. Fast-forward to me in December 2015, on stage doing a seminar about goals and failure, telling a story about how I played bass in a metal band and that my power stance obtained the power of metal. I’m still straight-edge though.”

“I work in an office job doing admin work. Listening to screamo music gives me a sore head and I don’t even own black eyeliner anymore.” 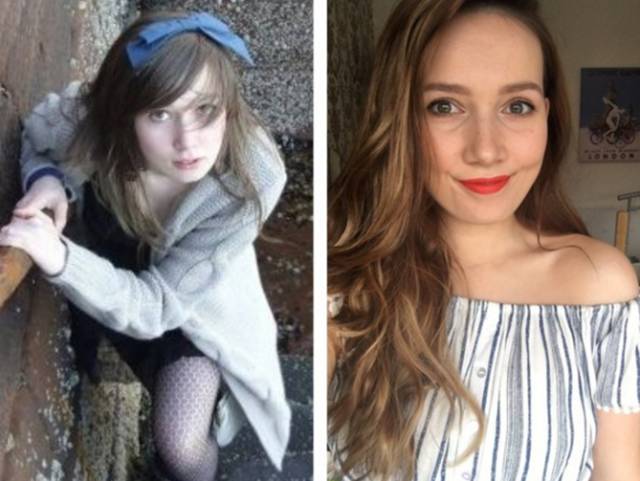 “Although, I am still an emo kid at heart. I will never stop loving Fall Out Boy and MCR and there will always be a special place in my heart for Slipknot. I just don’t see myself ever going back to wearing fishnet tights and straightening my fringe over my face.”

“I’m a 21-year-old college graduate working for a TV show in NYC.” 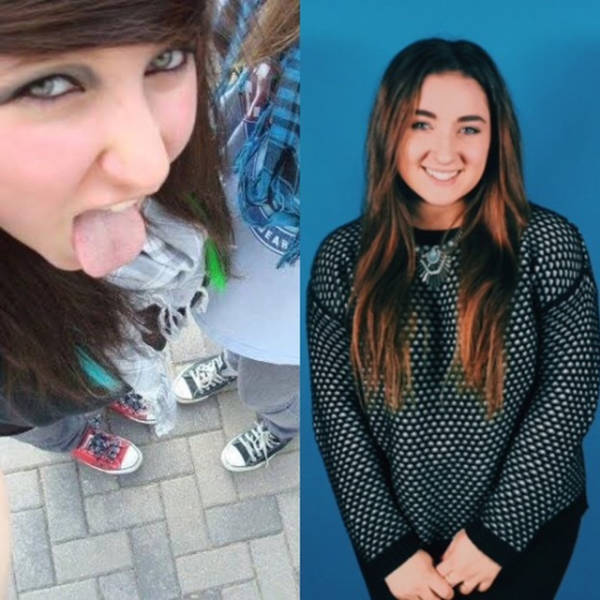 “Dang, 2008 was a rebellious time filled with too much eye makeup, songs about teen angst, and coloured streaks in my hair. I grew up, but I’ll always be an emo kid at heart.” 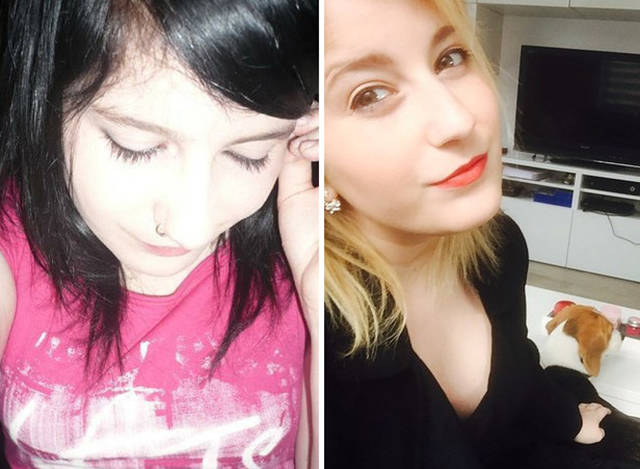 “I still wouldn’t change a thing about my teenage years and still follow Fall Out Boy around.”

“I’m on my third year of dispatching for our local police/fire department, and still listen to Saosin, Motion City Soundtrack, and those catchy Yellowcard songs!” 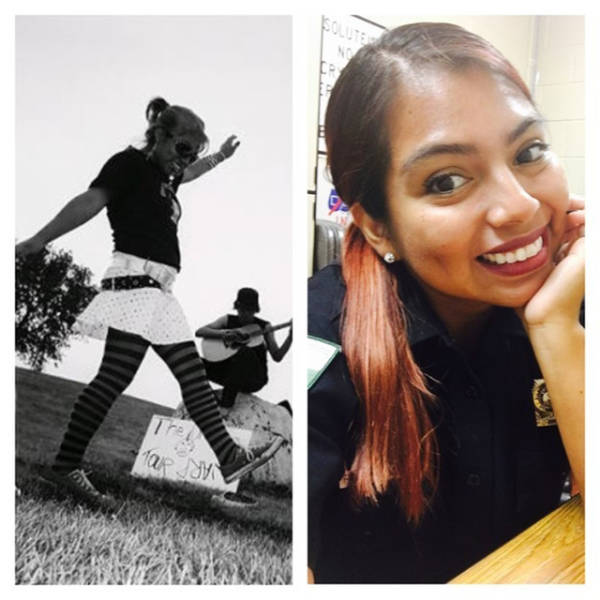 “I was always a lover of all types of music and the emo scene was no exception! I wasn’t as into it as much as a lot of my friends were, but nonetheless I rocked the band T-shirts along with a cute skirt! My greatest memories were hanging with the guys that I was part of a ska band with. Good times!”

“I graduated from college with two degrees and now work for a school district on the accounting side, but my inner emo is still there.” 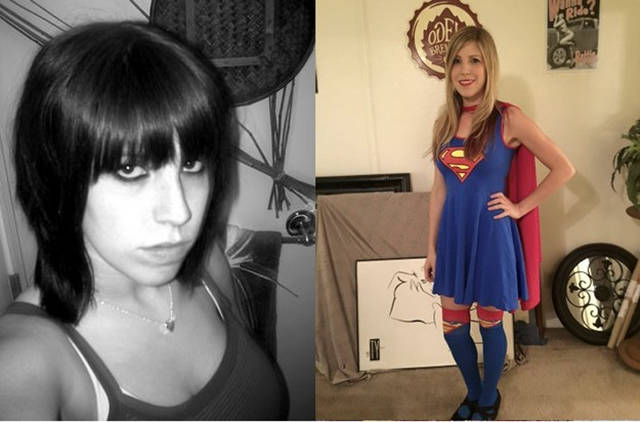 “I still rock red or purple underneath the blonde and have my nose and tongue pierced as well as four tattoos.”

“I keep my emo spirit alive by photographing local bands in my free time.” 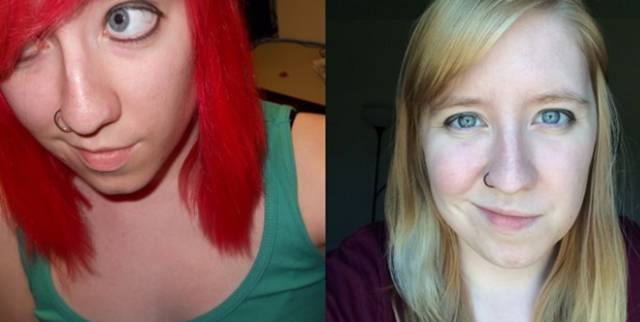 “Still emo through and through! I work at a hotel doing front desk as well as shipping and receiving.”

“I’m a mom to a beautiful 3-year-old girl, working full time at a children’s hospital, and going to get my paramedics license.” 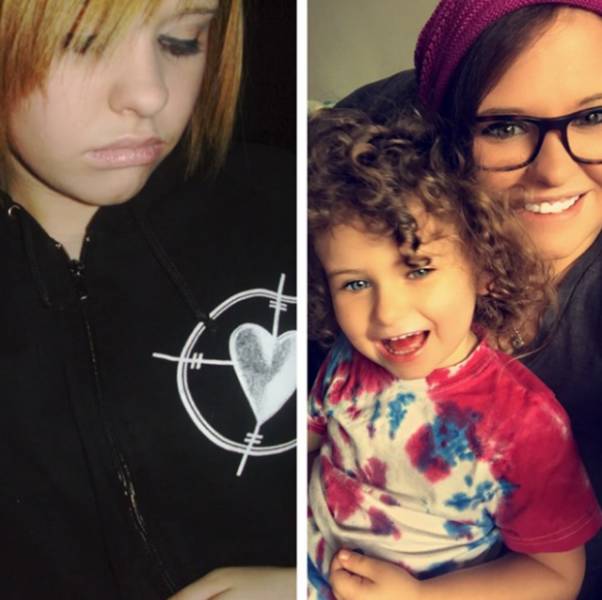 “I still love to listen to some old school MCR and Fall Out Boy and I’m definitely sharing that with my daughter! Also so thankful that the thick black eyeliner is over with! But all in all my inner emo with always be with me!” 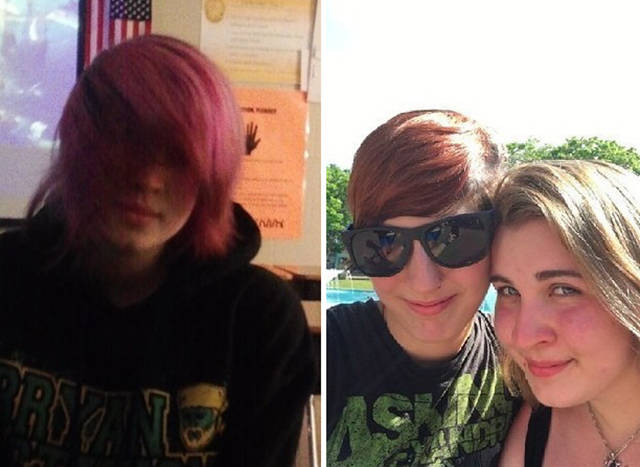 “My shoes are still either a choice of black combat boots or black vans.”

“I’m working at a children’s museum”. 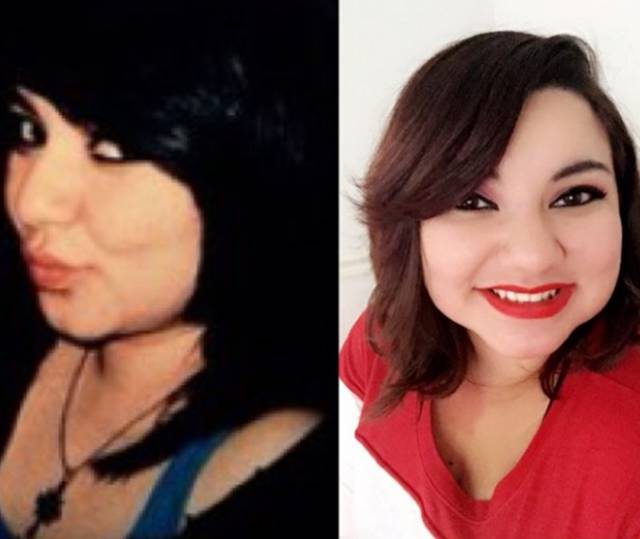 “My little emo phase started early on in middle school and lasted though my days in high school. On occasion I listen to the music from those days when I’m feeling nostalgic. I still have a little hint of the dark side. Do we ever really out grow it?” 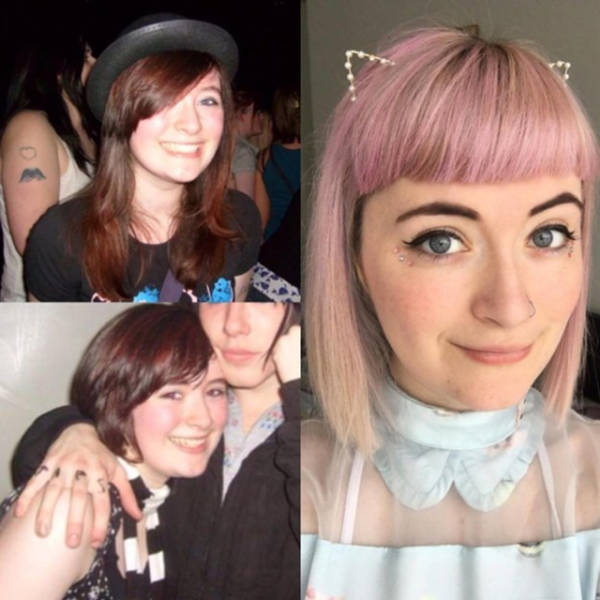 “I’m working towards an associates degree in mortuary science.” 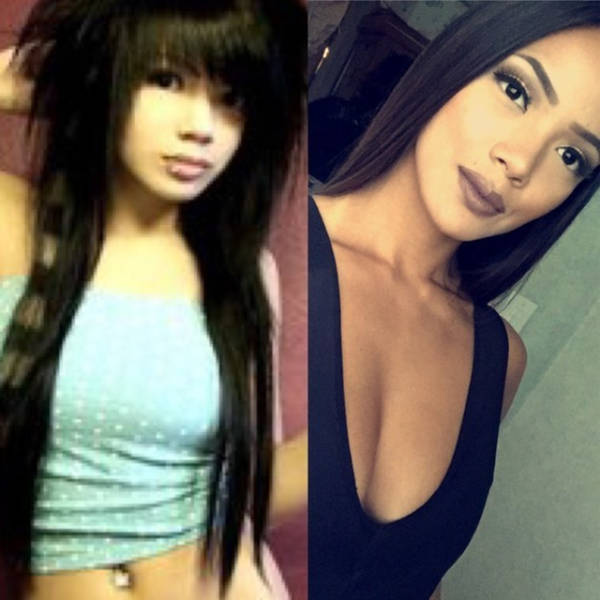