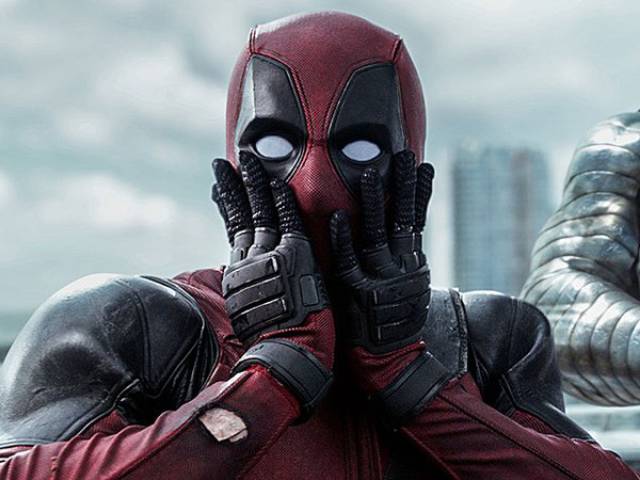 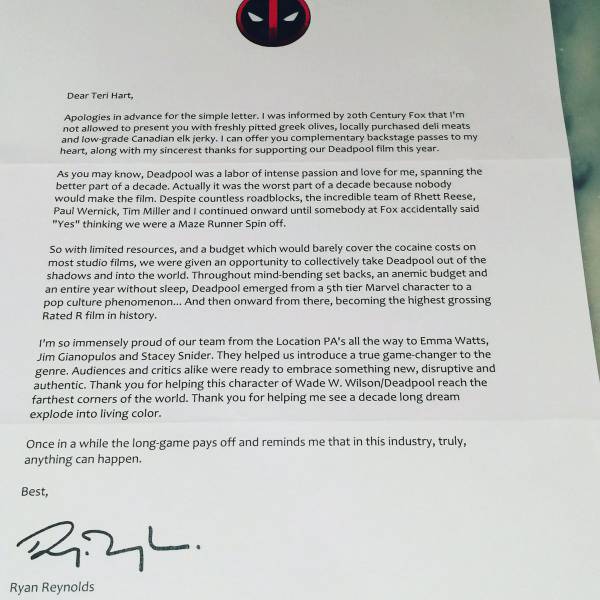 The letter reads: “Apologies in advance for the simple letter. I was informed by 20th Century Fox that I’m not allowed to present you with freshly pitted greek olives, locally purchased deli meats, and low-grade Canadian elk jerky. I can offer you complimentary backstage passes to my heart, along with my sincerest thanks for supporting our Deadpool film this year.

As you may know, Deadpool was a labor of intense passion and love for me, spanning the better part of a decade. Actually, it was the worst part of a decade because nobody would make the film. Despite countless roadblocks, the incredible team of Rhett Reese, Paul Wernick, Tim Miller and I continued onward until somebody at Fox accidentally said ‘Yes’ thinking we were a Maze Runner spin-off.

So with limited resources, and a budget which would barely cover the cocaine costs on most studio films, we were given an opportunity to collectively take Deadpool out of the shadows and into the world. Throughout mind-bending setbacks, an anemic budget, and an entire year without sleep, Deadpool emerged from a 5th tier Marvel character to a pop culture phenomenon… and then onward from there, becoming the highest-grossing Rated R film in history.

I’m so immensely proud of our team from the Location PA’s all the way to Emma Watts, Jim Gianopulos, and Stacey Snider. They helped us introduce a true game-changer to the genre. Audience and critics alike were ready to embrace something new, disruptive, and authentic. Thank you for helping this character of Wade W. Wilson/Deadpool reach the farthest corners of the world.

Thank you for helping me see a decade-long dream explode into living color. Once in a while the long game pays off and reminds me that in this industry, truly, anything can happen.”