They have appeared back in the 1960s and nowadays their size, four-engine dependability, and range can no longer compete with modern airplanes, and here’s where their afterlife takes place.

The Southern California Logistics Airport is located in Victorville, California — about 80 miles northeast of Los Angeles. 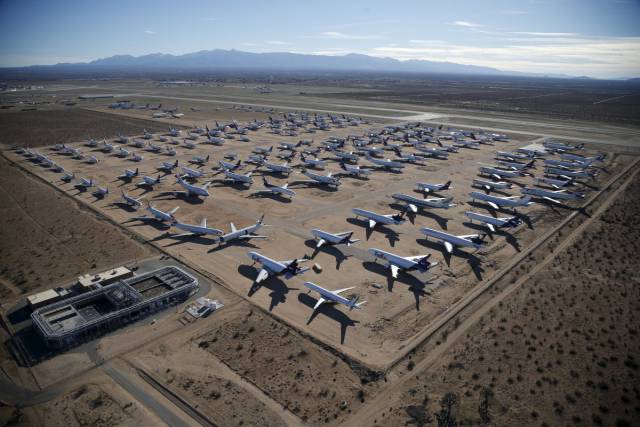 Due to its location in the Mojave Desert, Victorville's warm and dry climate make it the perfect place to keep aging airplanes for extended periods of time. 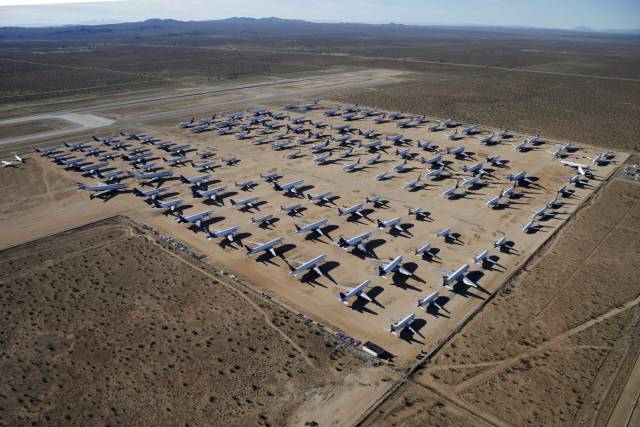 Airplanes here have either been retired or declared "surplus" — not needed for immediate operations. 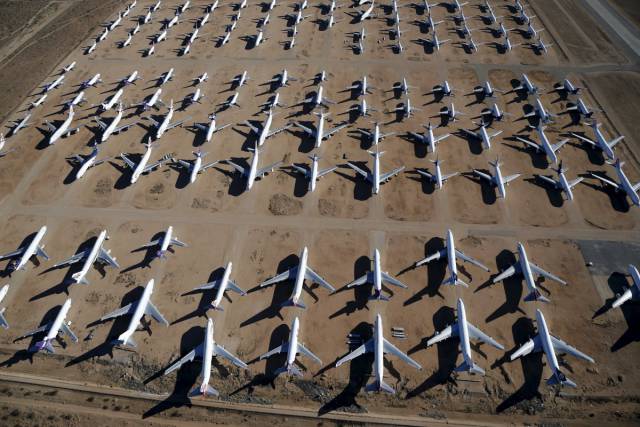 After they arrive, some planes are preserved so they can, one day, return to service with the airline or ... 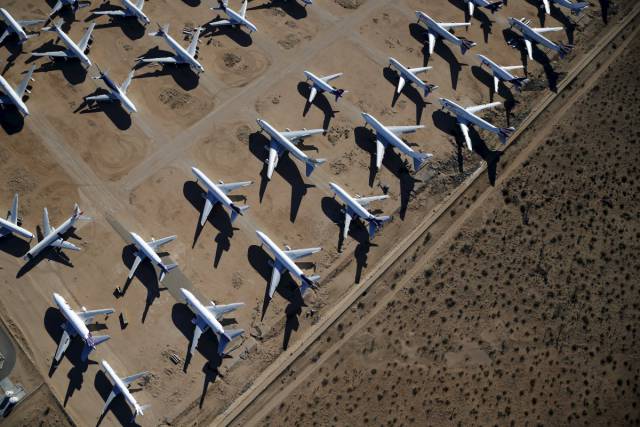 ... be sold to another airline. 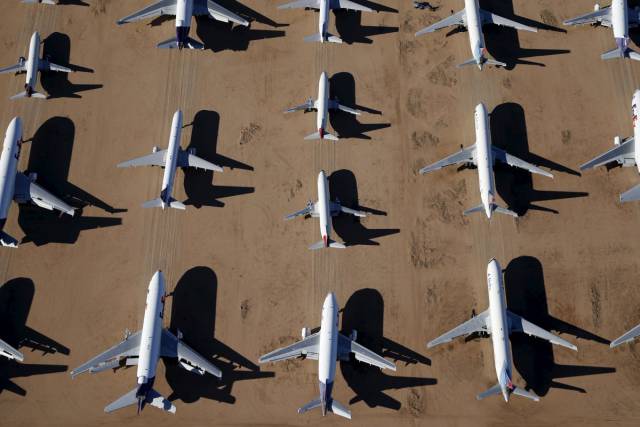 Those planes have their windows covered in foil and their fluids drained as they prepare for to sit in the desert for the long haul. 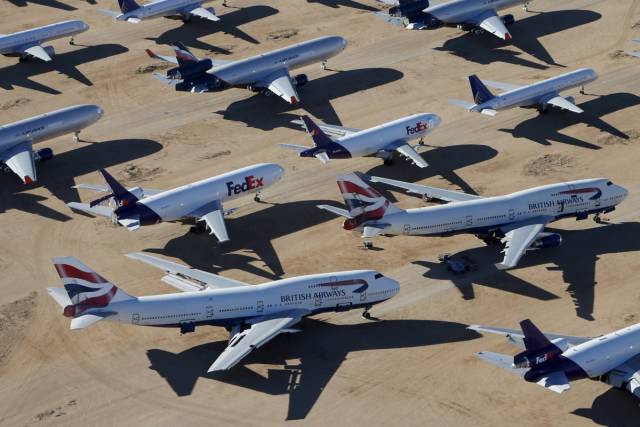 The aircraft's engines — the most valuable parts of the plane — are also removed. 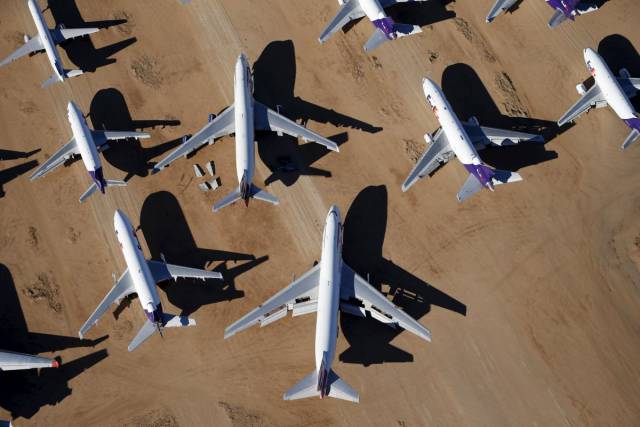 However, others — like this ex-Orient Thai Boeing 747 — are broken up and sold for parts. 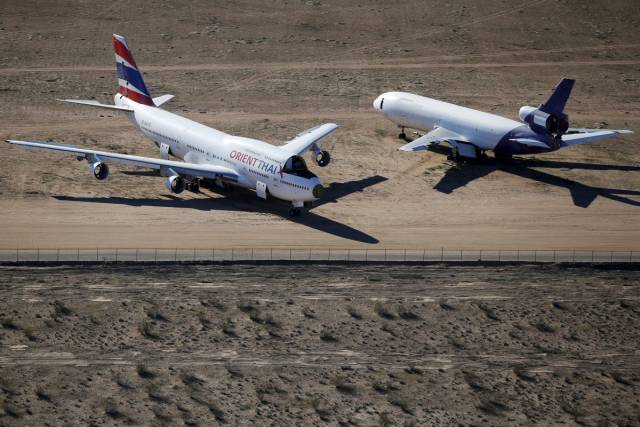 After the valuable parts, such as the electronics, interior trim, and other reusable components, have been harvested, the remaining pieces are chopped up and sold for scrap. 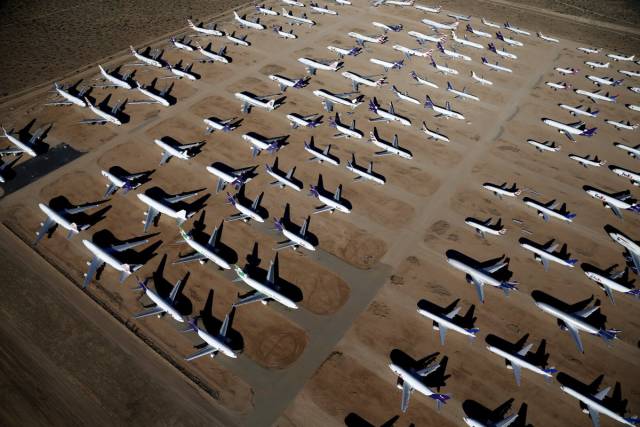 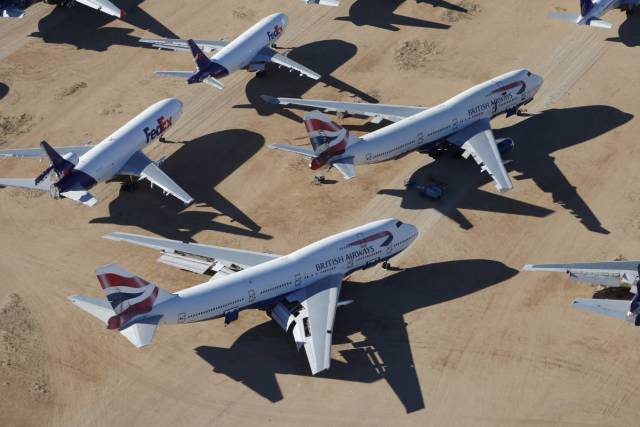 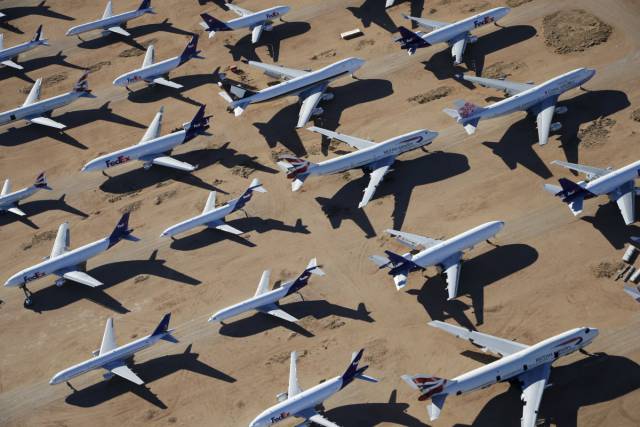 But as the average age of their 747 fleet nears 20 years, British Airways is slowly retiring its older birds. 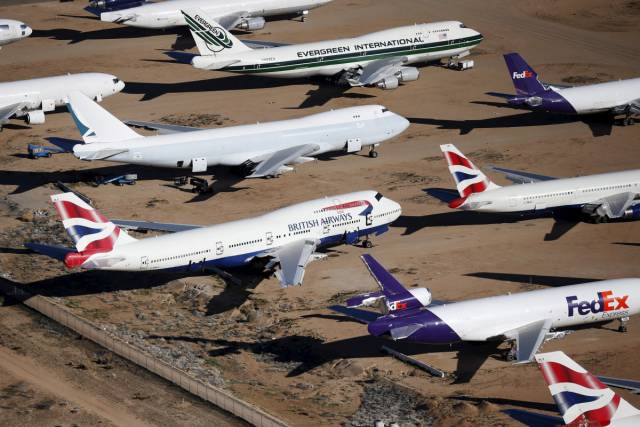 In addition to BA, Singapore Airlines, Air New Zealand, and Cathay Pacific have sent their 747s to Victorville. 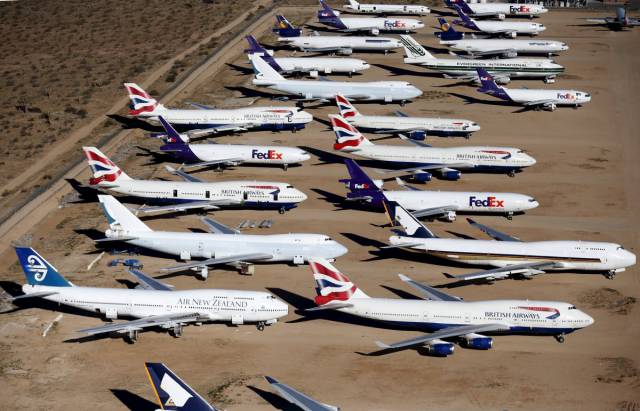 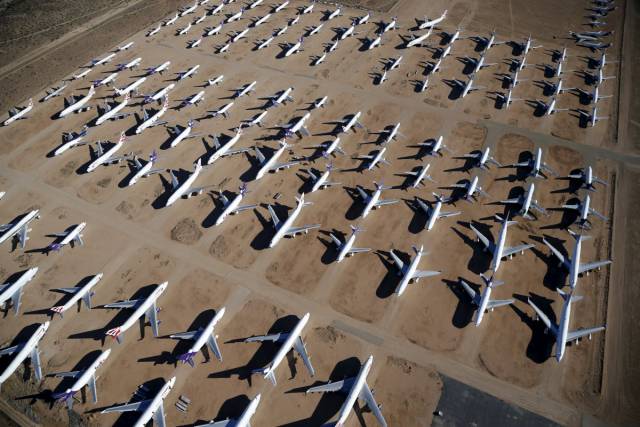 FedEx is also a major tenant. 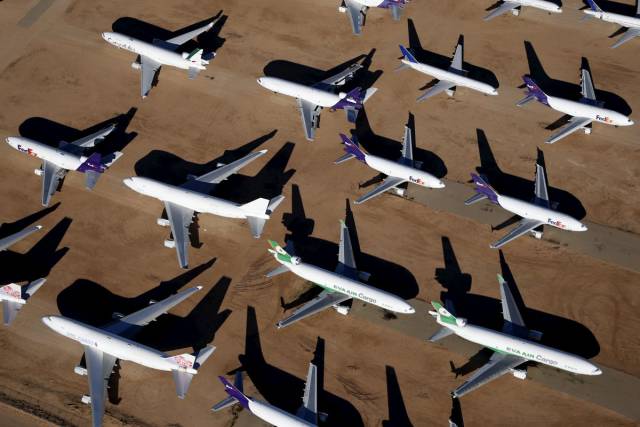 The cargo carrier is in the process of updating its massive fleet of mostly older jets. 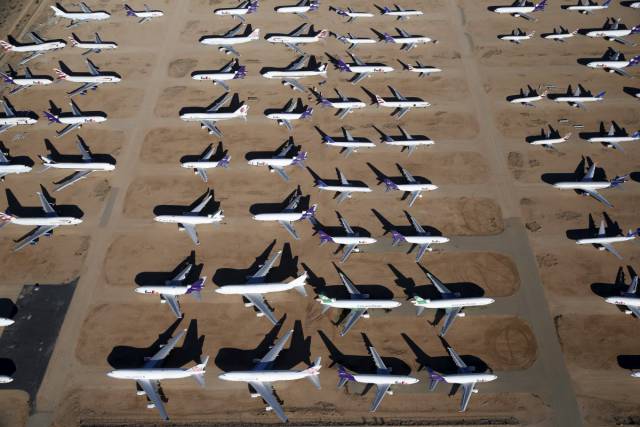 As a result, many of its older McDonnell Douglas DC/MD-10 and MD-11 freighters have been retired to the desert. 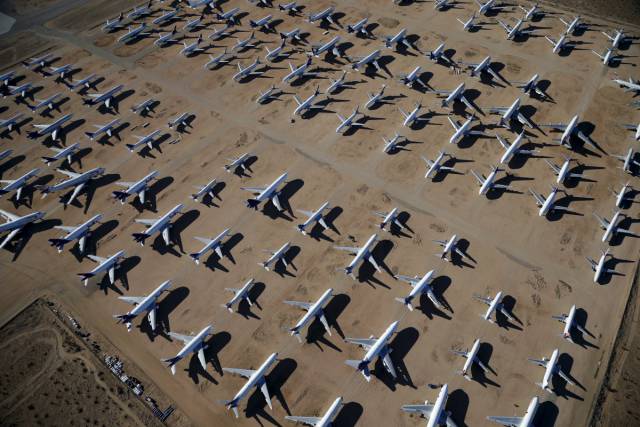 FedEx has also retired some of its Airbus A300 and A310 freighters. 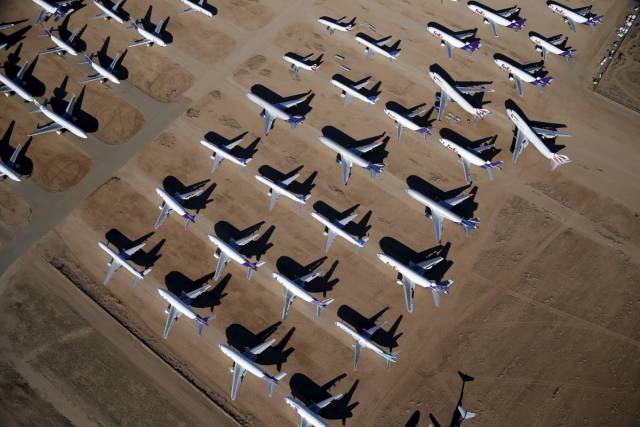 There are some smaller jets here, as well. Like this trio of retired FedEx Boeing 727 cargo planes. 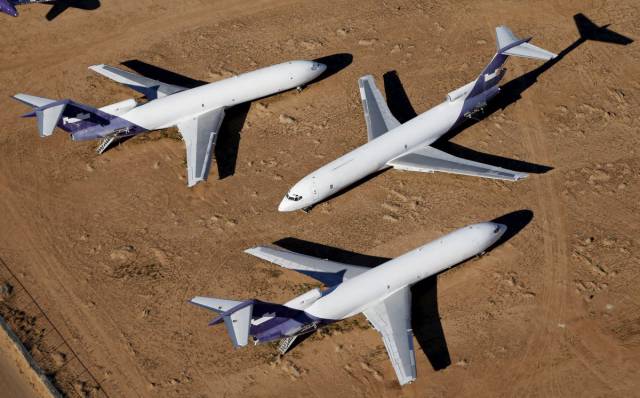 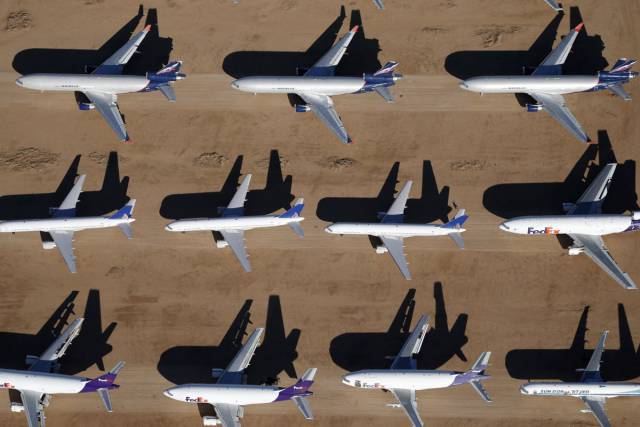 Mixed in with the FedEx jets are some ex-Delta Airlines Boeing 767s. 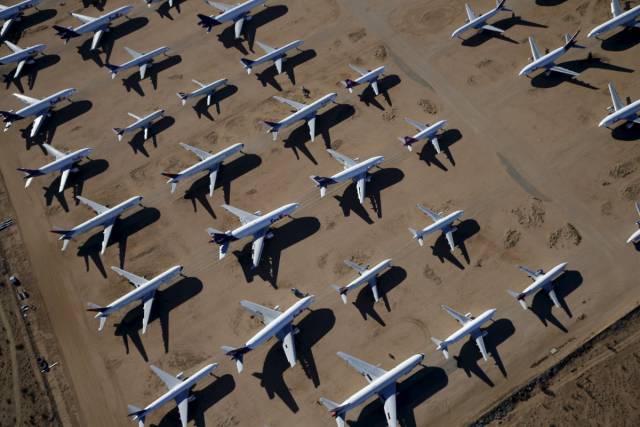 The bone yard is an ever-changing aviation landscape. As old tenants are broken up or sold, new arrivals fresh from mainline service are flown in. 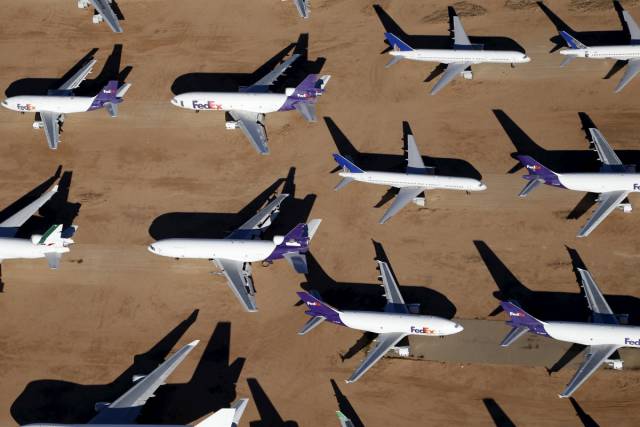