Four men behind the travel vlog High on Life were thrust under fire in early May for walking off the boardwalk area at Yellowstone's Grand Prismatic Spring. The thermal spring is one of the largest in the United States, and its water hovers around 160 degrees. Danger to the tourists aside, it is also an extremely delicate ecosystem. After drawing ire from the public, the foursome issued an apology. 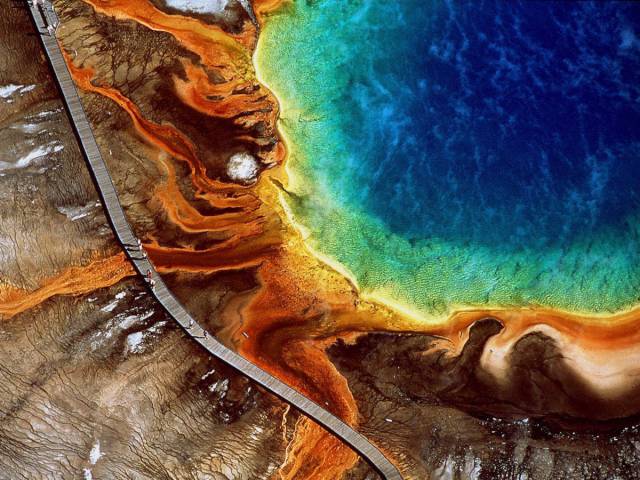 A woman graffitied her Instagram handle all over several National Parks.

An Instagram artist named Casey Nocket was banned from all National Parks for life after graffiti of her Instagram handle was documented in seven different parks in 2014. She posted the images of her "tags" on her own Instagram, so was understandably caught relatively quickly and plead guilty in 2016. 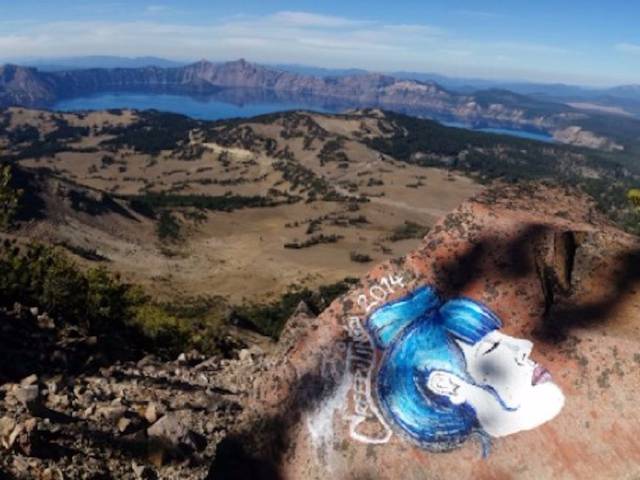 Two people decided to load up a bison calf into the back of their car. It later had to be killed.

In May, two visitors to Yellowstone saw what they thought was an abandoned bison calf. Instead of leaving wildlife alone or alerting a ranger, the tourists loaded the calf into the back of their SUV in a "rescue." The calf later had to be euthanized because it was rejected from its herd, likely due to its contact with humans. 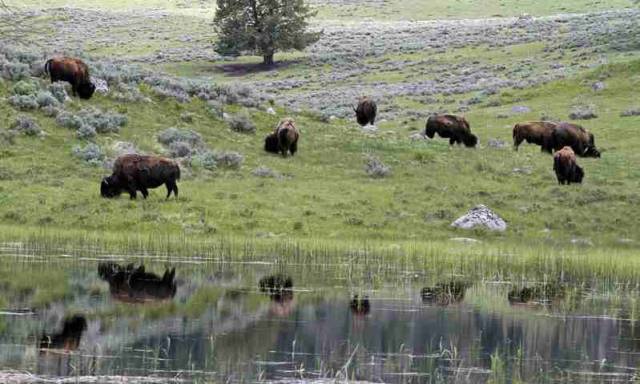 A woman smoked meth inside the hollow trunk of a 3,500-year-old tree. She started a fire and the entire tree burned down.

A woman decided to light up in a massive 3,500-year-old Cyprus tree known as "the Senator." The tree caught fire and burned to the ground, and the woman received five years of probation. 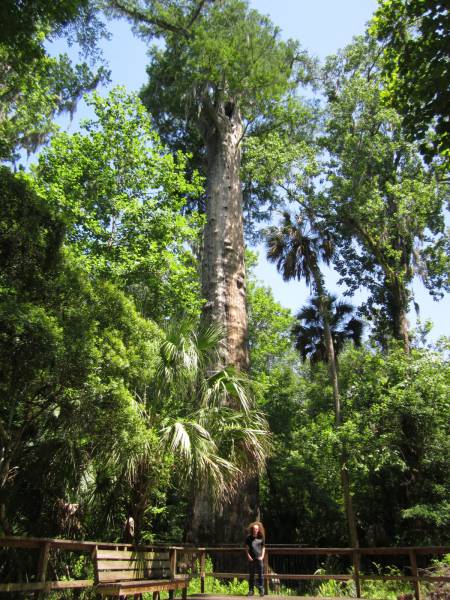 Some tourists thought bear spray (pepper spray) worked like bug repellent and sprayed the hot chemicals all over their bodies.

"I was in a National Park at the visitor's center. Suddenly, there's this huge commotion and a lot of screaming from the lobby. I head over to find an entire tourist family crying and screaming and the park staff trying their best to manage the situation. Then the air shifts and it hits me. They had applied a liberal amount of BEAR SPRAY all over themselves and the entire lobby. Apparently, they had mistaken the wording of "bear repellent" and had assumed it was to be used like mosquito repellent." 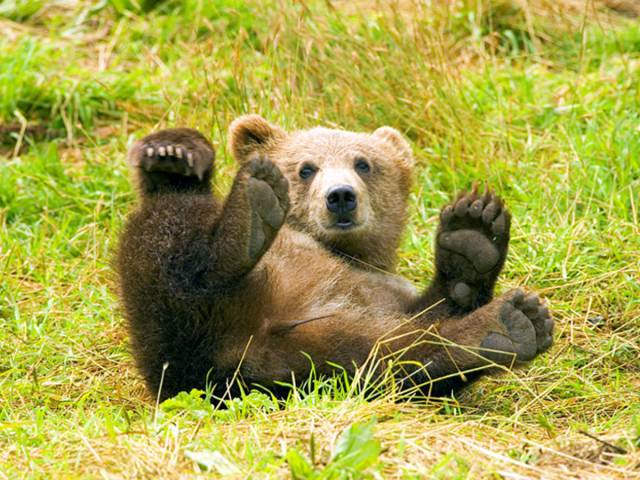 Boy Scout leaders in Utah cheered as they pushed over a 2,000-year-old rock formation because they thought it was dangerous.

Some humans truly think they are changing the natural landscape for good. Boy Scout leaders in Utah's Goblin Valley came under fire in 2013 for deliberately pushing over and toppling a 200-million-year-old rock formation known as a hoodoo. The men filmed their conquest and cheered when it toppled, later claiming that they thought the unstable rock sculpture was "dangerous." The men later received probation for third-degree felony charges. 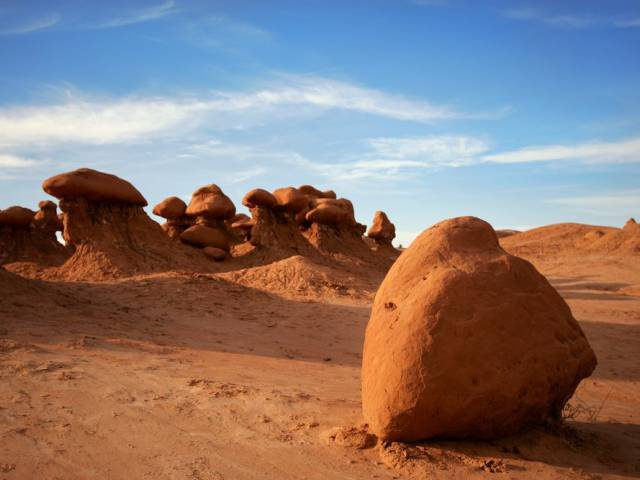 "In Shark Valley at the Everglades National Park, every now and then some idiots will try to steal baby gators. This is utterly stupid, not only for the fact that they grow up to be full size gators, but because when the little gators feel threatened, they cry, which attracts all the adult mama gators in the area. Which ends up being a huge problem since it's literally in the middle of the Everglades and swarming with gators." 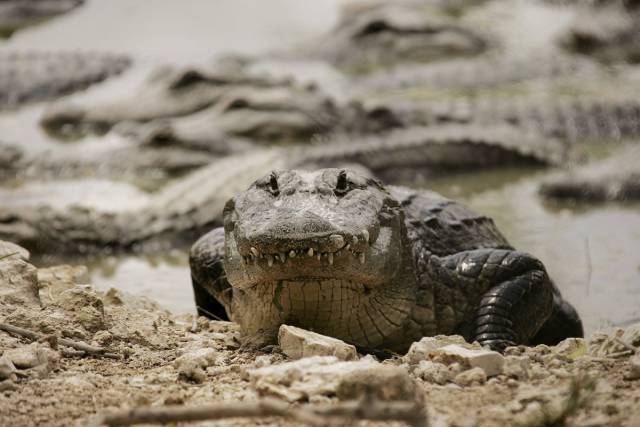 A man dropped a rock from the top of a busy hiking trail in the Grand Canyon, nearly hitting several hikers.

Redditor kristyin says "You see every hiker see their impending death as this rock bounced of the canyon wall." 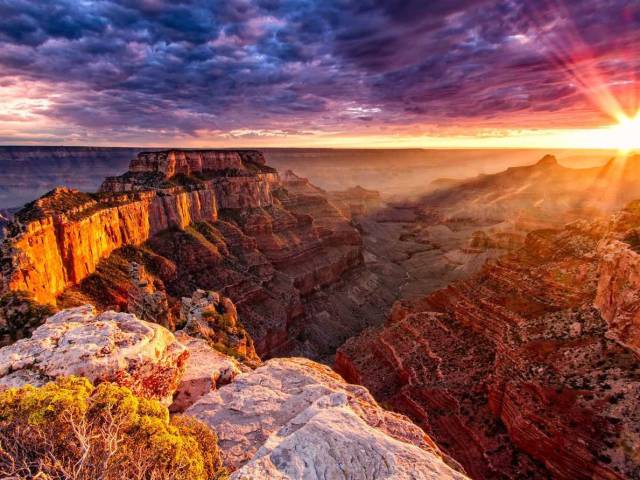 A person on a whale-watching tour asked the guide what elevation they were at. The answer: sea level.

"During a whale watch on a boat in a marine sanctuary I had a guy ask me what the elevation was... People get stupid on vacation." 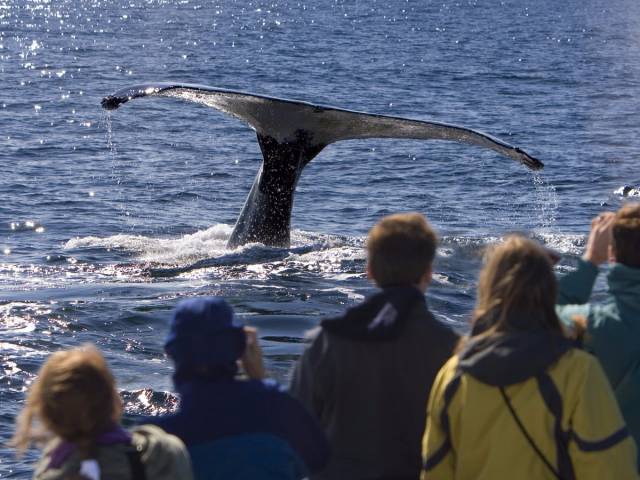 A man dove headfirst into 200°F thermal water to try to rescue a dog. Both died.

A tragic story of acting without thinking resulted in the death of a man and a dog at a Yellowstone geyser in 1981. According to rumor-debunking website Snopes, a man was visiting the Celestine Pool when his friend's dog escaped and fell into the 200°F pool. The man dove headfirst into the spring in a valiant attempt to save the dog. Alas, the man suffered third-degree burns to his entire body and neither he nor the dog survived. 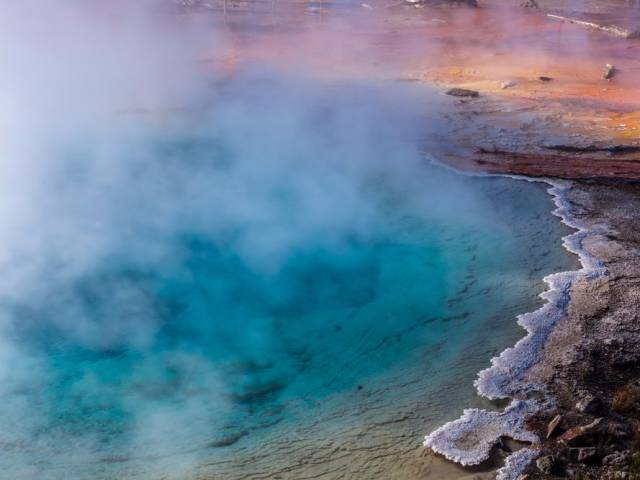 Tourists tried and failed to light fossilized wood on fire, which also happens to be illegal.

"I was working in Petrified Forest National Park as a researcher... I watched two tourists pick up pieces of petrified wood (so, rocks) and try their hardest to light them on fire. This is actually illegal, as was their decision to take the pieces of petrified wood home with them when they finally decided that they wouldn't burn. I waited until they left and then called them in to the law enforcement. They were stopped at the gate and their car was searched." 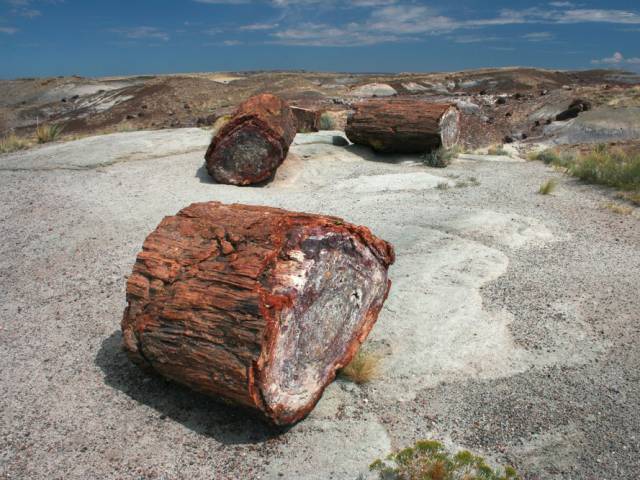 Visitors complained to hotel staff that the bears in Yellowstone weren't "trained" to come out and play.

While we can't confirm the validity or the seriousness of this comment card, some visitors to Yellowstone were apparently disappointed at the lack of wildlife sightings.

The card reads, "Our visit was wonderful but we never saw any bears. Please train your bears to be where guests can see them. This was an expensive trip to not get to see any bears." 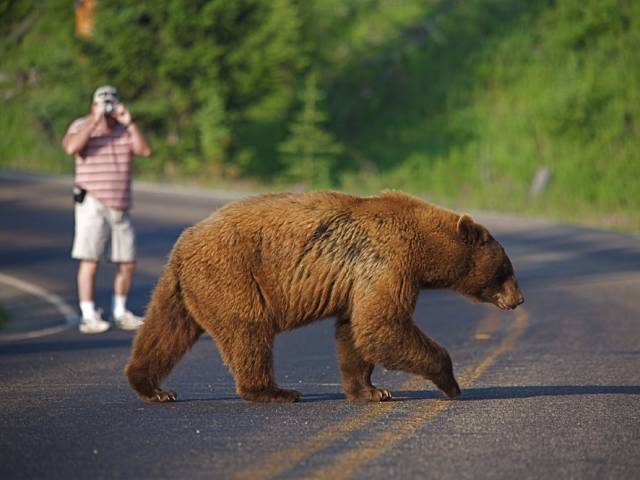 Boy Scouts decided to cut down several young trees in a National Park, and were fined heftily.

"A group of Boy Scouts decided they wanted to try to build a raft and started sawing away at young trees. That is suuuuuuper illegal. I think after they were caught they got fined something like $3,000 per tree, I can't remember exactly." 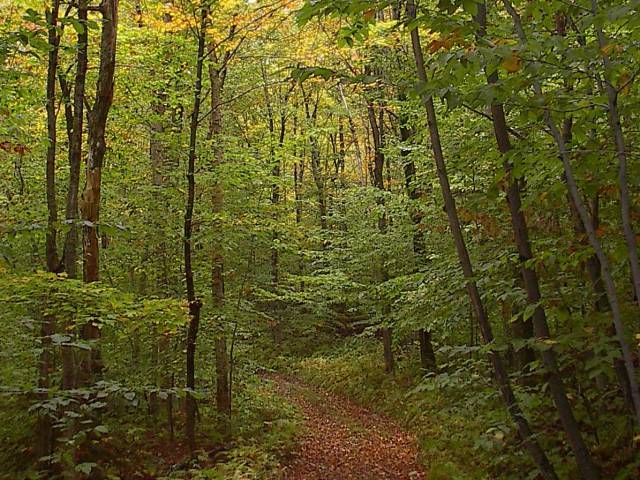 Many people have gotten too close to bison in Yellowstone, often in hopes of snapping an amazing picture, but ended up with serious injuries in the process.

This one comes straight from the Center for Disease Control and Prevention: don't take selfies with the bison in Yellowstone.

Of five people who were gored by bison in Yellowstone in summer 2015, "[t]hree persons sustained injuries while taking photographs at a distance of approximately 3–6 ft (1–2 m) from bison, including two who turned their back on the bison to take the photograph; one person reported taking a cell phone self-portrait (selfie), which necessitated getting close to the animal." 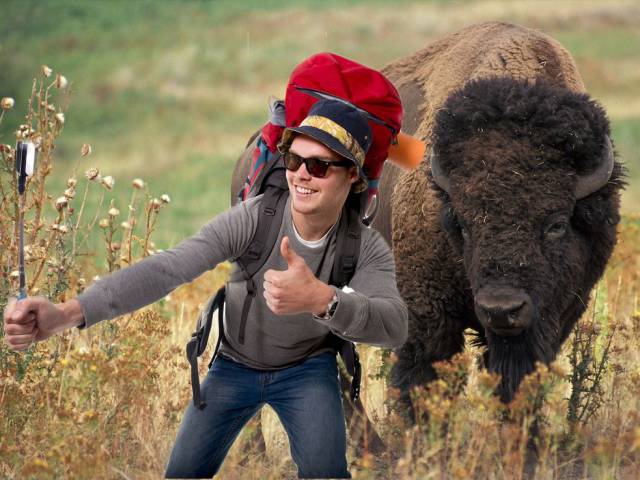 A man left greasy fast-food wrappers in the woods, littering and attracting bears.

"He got out of his truck with a bag of McDonald's and sat down on a rock and ate his meal, it consisted of a two-cheeseburger meal, fries and a Coke. How do I know exactly what he was eating without staring at him the whole time? Because when he was done he threw all of the trash into the woods behind him. Greasy cheeseburger wrappers and all. My dad explained to him there are bears in the woods and that, that kind of thing is an invite for them to come into the campground. Guy laughed, said it was fine. Dad threatened him and made him go pick it all up." 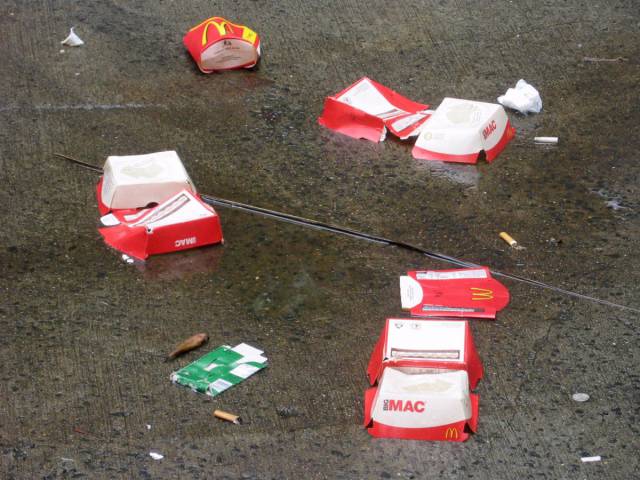 Ill-prepared hikers thought they could summit Mt. Whitney in two to three days with only Clif bars as fuel.

Redditor Choniepaster was a back country trail worker in Kings Canyon/Sequoia National Park in California and reported, " [I] ran into a group of about 4 people who were trying to hike to Mt. Whitney and back in two-three days (around 70-80 miles round trip from where they started) and they only brought cliff bars and a space blanket. They ended up getting chased down by the nearby ranger and escorted out of the back country. 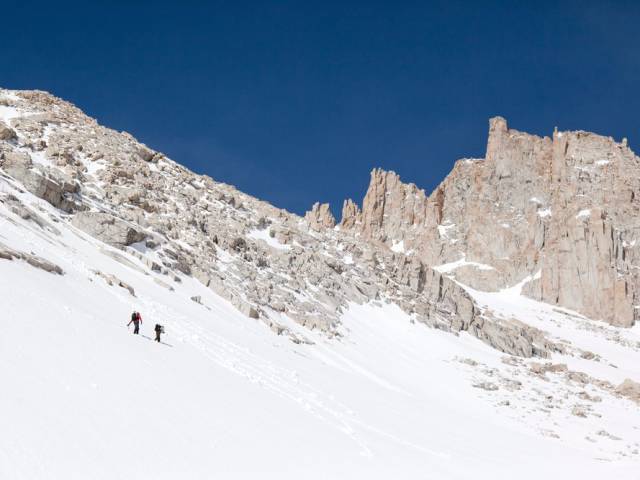