It is already a nearly 16-year-long fight — longer than any other US foreign war and most other military operations, and the US is still not winning against the forces of Taliban. There are currently 8400 US troops, and Trump administration is planning on sending 5000 more there to support Afghan units fighting the Taliban, as well as to counter ISIS and Al Qaeda elements.

Osama bin Laden is seen at an undisclosed location in this television image broadcast Sunday, October 7, 2001. Bin Laden praised God for the September 11 terrorist attacks and swore America "will never dream of security" until "the infidel's armies leave the land of Muhammad," in a videotaped statement aired after the strike launched Sunday by the US and Britain in Afghanistan. 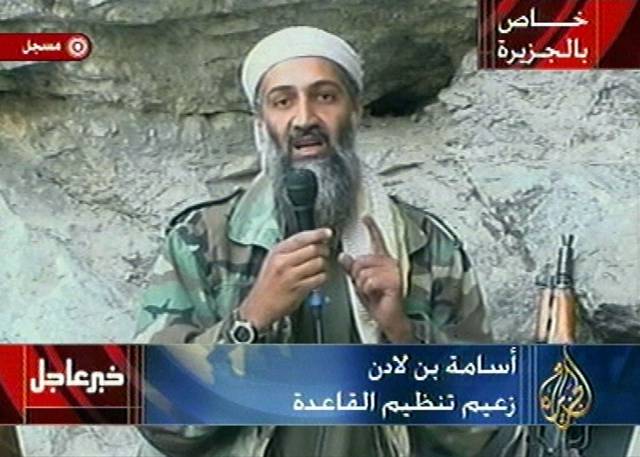 The US and Britain on October 7, 2001, launched a first wave of air strikes against Afghanistan and then US President George W. Bush said the action heralded a "sustained, comprehensive and relentless" campaign against terrorism. 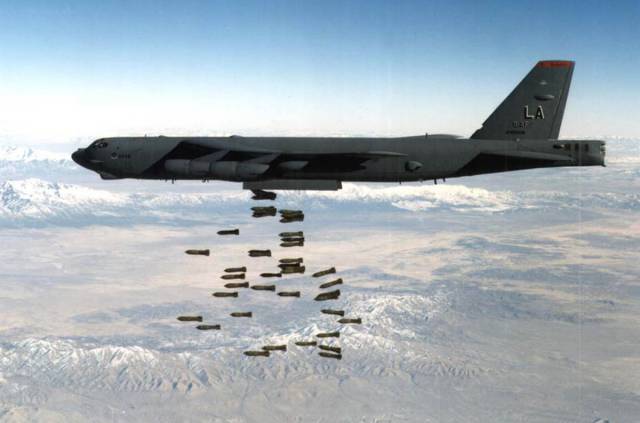 Eyewitnesses said they saw flashes and heard explosions over the Afghan capital of Kabul in the first phase of what the US has said will be a protracted and wide-ranging war against terrorism and the states that support it. The attack had been prepared since the September 11 suicide attacks on the US. 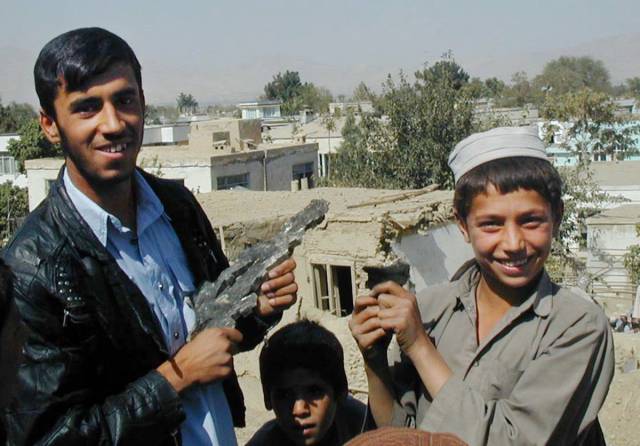 The US and Britain hit Afghanistan and key installations of the Taliban regime with cruise missiles Sunday night for harboring suspected terrorist Osama bin Laden. Many residents of Afghanistan seem unfazed by the bombing after living in war like conditions for more than 20 years.

Two Northern Alliance soldiers watch as the dust and smoke rises after explosions in Taliban positions on Kalakata hill, near the village of Ai-Khanum in northern Afghanistan, November 1, 2001. 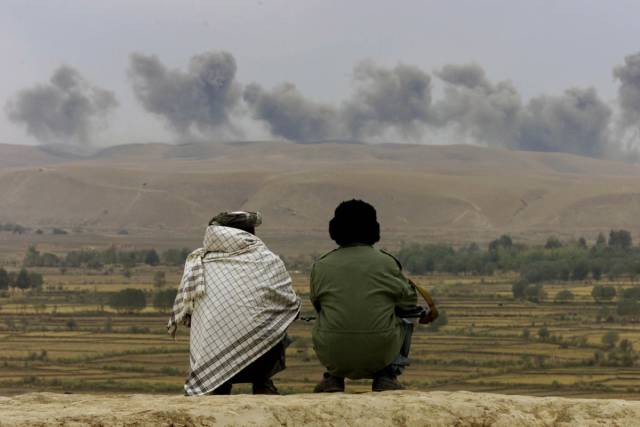 The Pentagon said on B-52s dropped heavy loads of bombs, a tactic known as carpet bombing, on Taliban troops north of Kabul as a result of improved targeting intelligence, partly from US special forces on the ground.

US Marine PV2 Eileen M. Schnetzko stands on guard at Bagram airport, March 2, 2002. US troops were based at Bagram, north of Kabul. 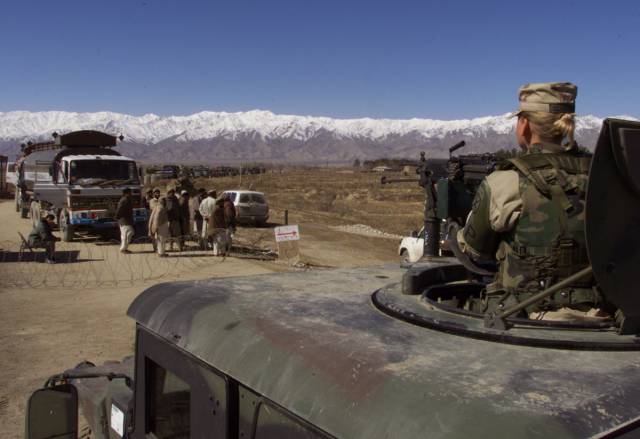 There were some 4,000 US troops based in Afghanistan as part of the international war against terrorism.

Land-mine detectors stand by as a US Army soldier, right, maneuvers Hermes the robot into a cave to detect mines, traps, and other unexploded ordnance as well as weapons or equipment possibly hidden by Taliban or al-Qaida fugitives in the eastern border town of Qiqay, Afghanistan, Monday, July 29, 2002. 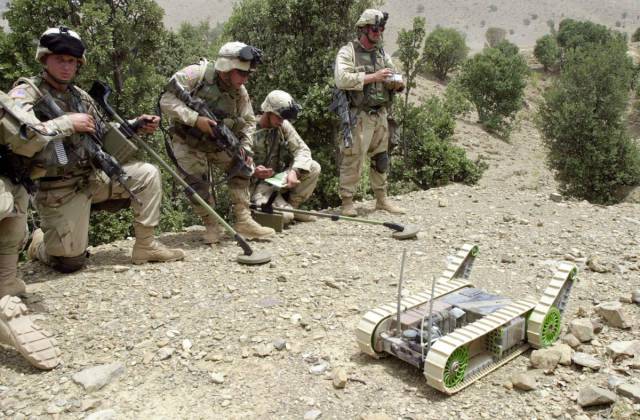 The war in Afghanistan was the first time robots were used by the US military as tools for combat. Proponents of the robots believed sending them first into caves, buildings, or other dark areas will help prevent US casualties.

Afghan villagers watch as US soldiers from the 82nd airborne's Bravo Company search a house for suspected Taliban and al-Qaida forces in the central part of the Baghran river valley during the finishing stages of "Operation Viper" in Helmand Province, southern Afghanistan on Monday, February 24, 2003. 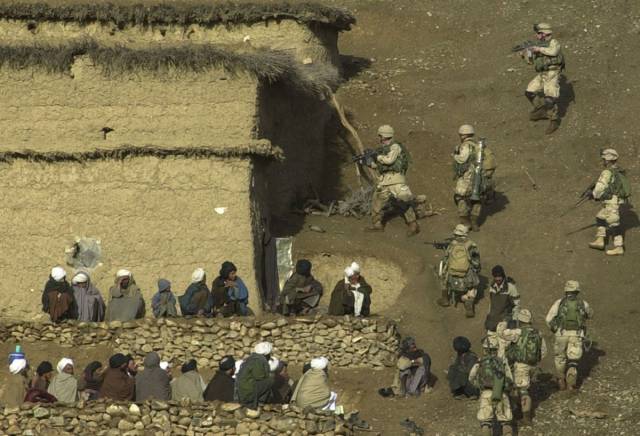 Suspected enemy fighters were spotted taking ambush positions in the area a few weeks ago by US troops as they went on patrol as part of the ongoing war against terrorism.

A US special forces soldier, left, watches while Afghan militia wait in line to turn in their weapons at a military base in Kunduz, Afghanistan, October 22, 2003. 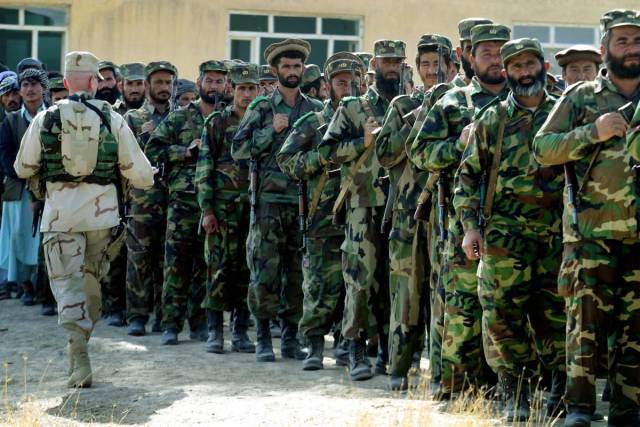 A long-awaited UN-sponsored project to disarm, demobilize, and reintegrate 100,000 soldiers across Afghanistan was under way in the north, a key step that was hoped would bring eventual peace to this war-torn country. The "New Beginnings Programme," which lets soldiers exchange their weapons for jobs, began in the northern province of Kunduz.

A Chinook helicopter hovers over US troops in the village of Jegdelic, about 56 miles southwest of Kabul, Afghanistan, in this picture taken on December 24, 2004. 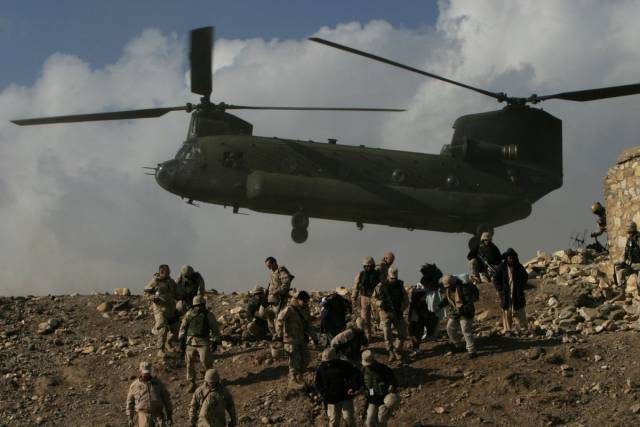 A US military helicopter carrying up to 20 American troops crashed during an anti-guerrilla mission in eastern Afghanistan, US officials said. The fate of those on board was not immediately known.

A US soldier inspects a wedding car at a checkpoint in a crossroad near Bagram air base and detention center, north of Kabul, Afghanistan, Tuesday, July 12, 2005. 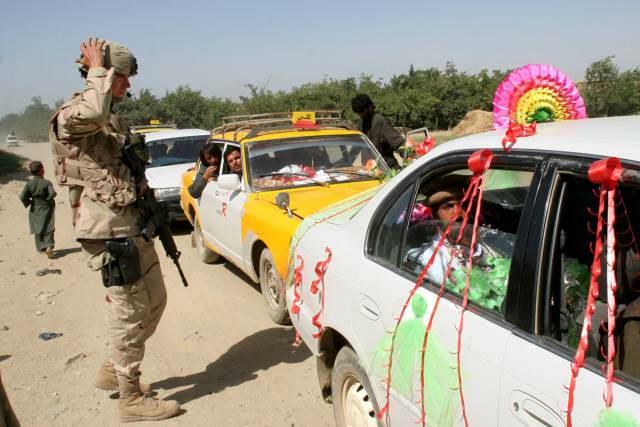 Then-US Secretary of Defense Donald Rumsfeld, center, presents a medal of valor to Sgt. Kenneth Stover, left, as soldiers watch from a rooftop during a medal ceremony in Khandahar, Afghanistan, December 22, 2005. 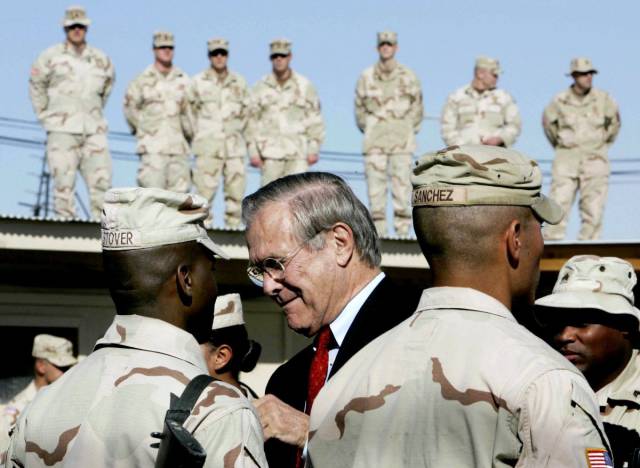 Rumsfeld said a rapid withdrawal of US forces from Iraq or Afghanistan would spawn more terrorism in the region and raise the risk of attacks on the US. Addressing US troops on the second day of a visit to Afghanistan, Rumsfeld said, "there are some in Washington who are questioning why our country is fighting this difficult war on terror half a world away."

US soldiers have lunch at the shopping area of the Kandahar military base, south Afghanistan, Wednesday, August 2, 2006. 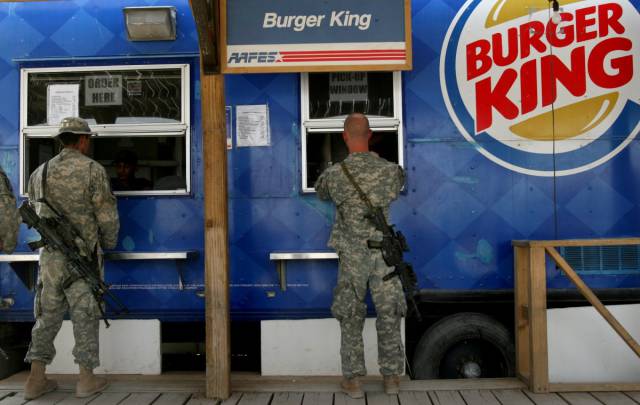 An Afghan boy looks at US soldiers as they patrol a village near the town of Makkor, southwest of Kabul, April 20, 2007. 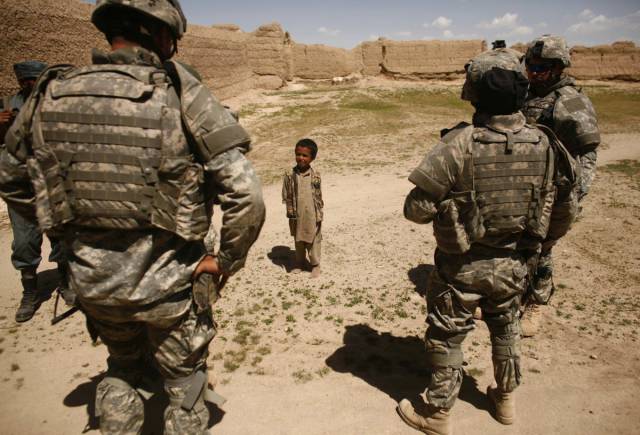 A US soldier works with a shovel as a vehicle is stuck in mud, some 70 km south of Ghazni, southeastern Afghanistan, April 23, 2007. 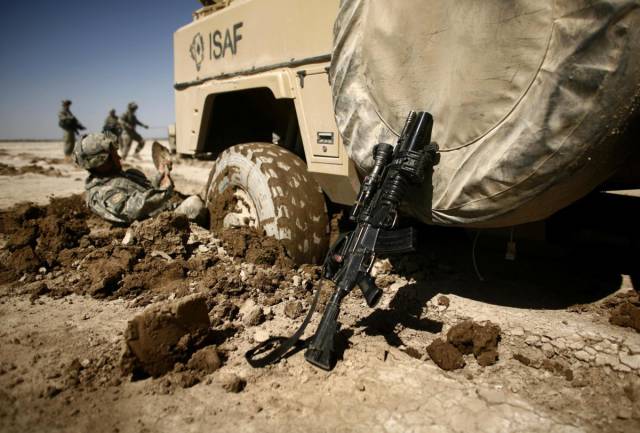 British and US soldiers control the crowd during medical assistance in Kabul, February 26, 2008. 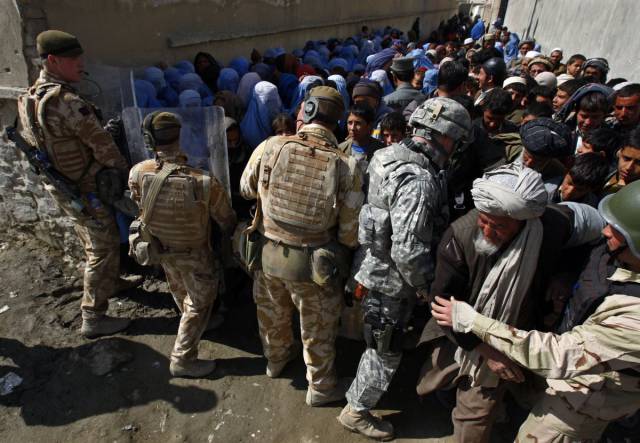 Sgt. William Olas Bee, a US Marine from the 24th Marine Expeditionary Unit, has a close call after Taliban fighters open fire near Garmsir in Helmand Province, May 2008. 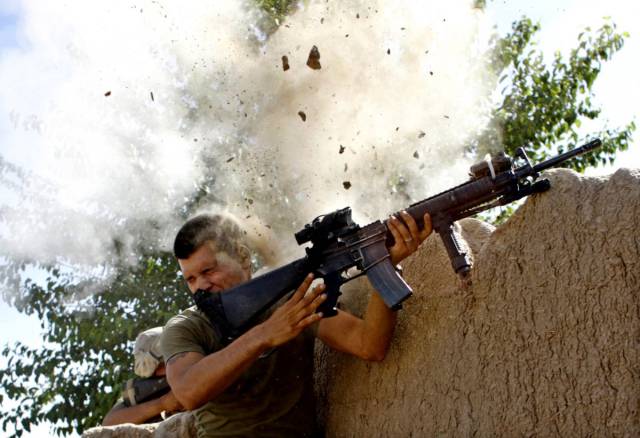 US soldiers of the 2-12 Infantry, 4th Brigade prepare to tow a broken-down improvised-explosive-device (IED) detecting Huskie vehicle during a patrol in the Pesh Valley in Afghanistan's Kunar Province, July 30, 2009. 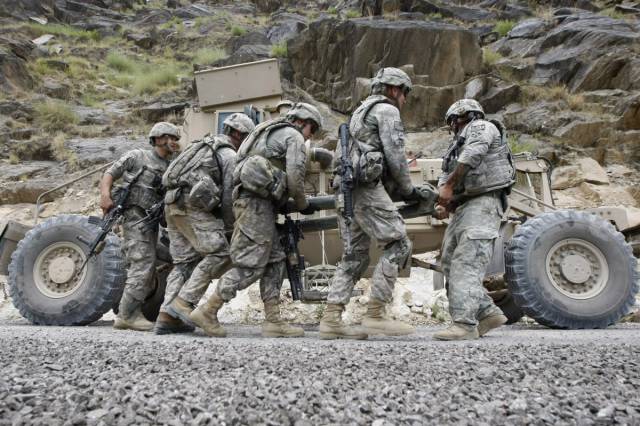 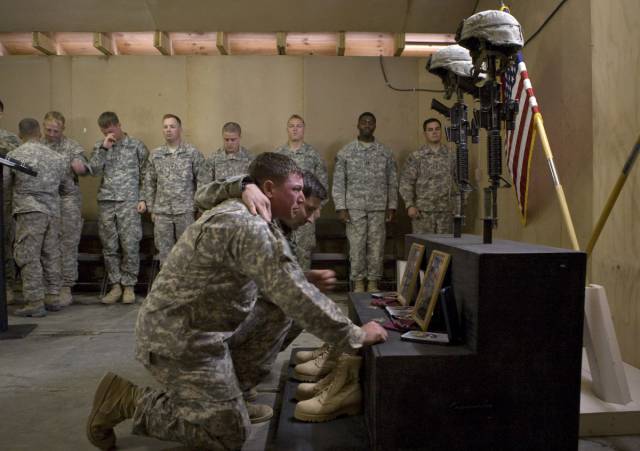 Capt. Whitten from Grimes, Iowa, and Pfc. Lovejoy from Albuquerque, New Mexico, were killed by an IED on February 2, when on patrol in southern Afghanistan.

NATO soldiers play table soccer under flashlights at a military outpost near the village of Bazaar e Panjwaii, in the Panjwaii district of Kandahar province, August 2010. 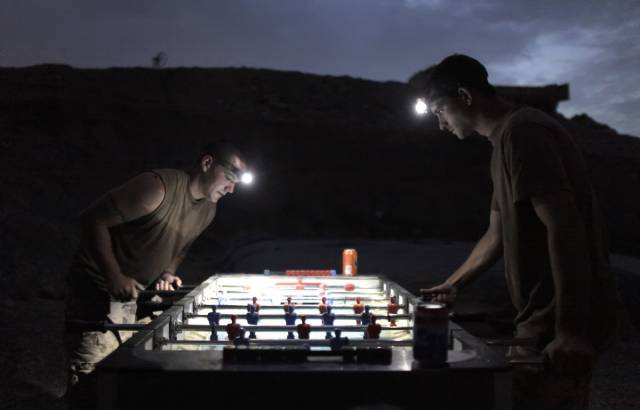 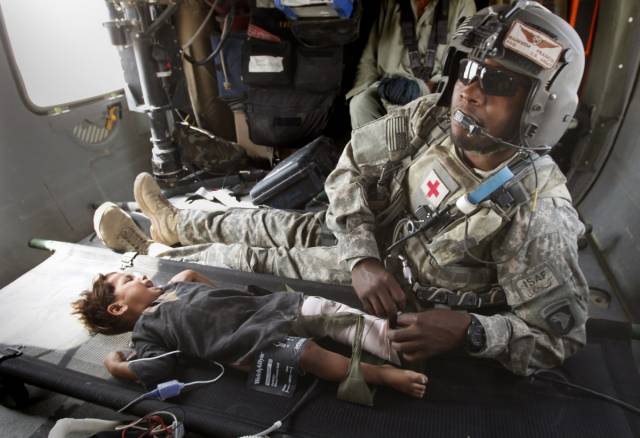 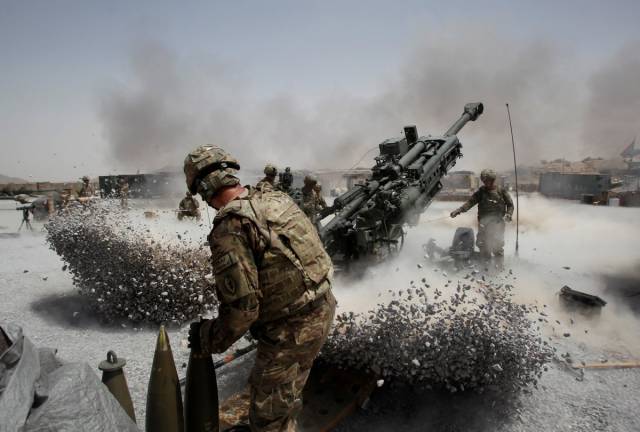 An Afghan shepherd walks with a flock of sheep past a US Marines armored vehicle outside the Camp Gorgak in Helmand province, southern Afghanistan, July 5, 2011. 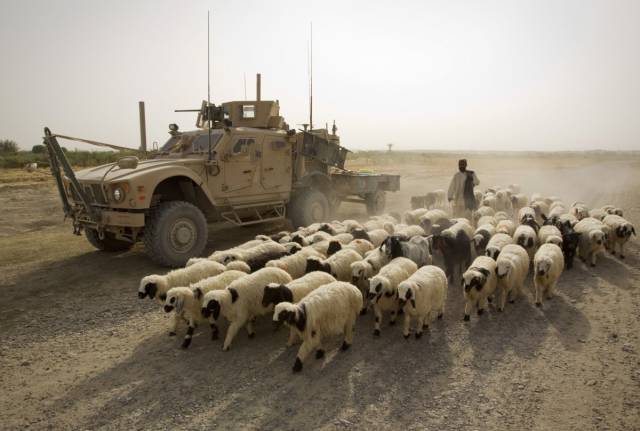 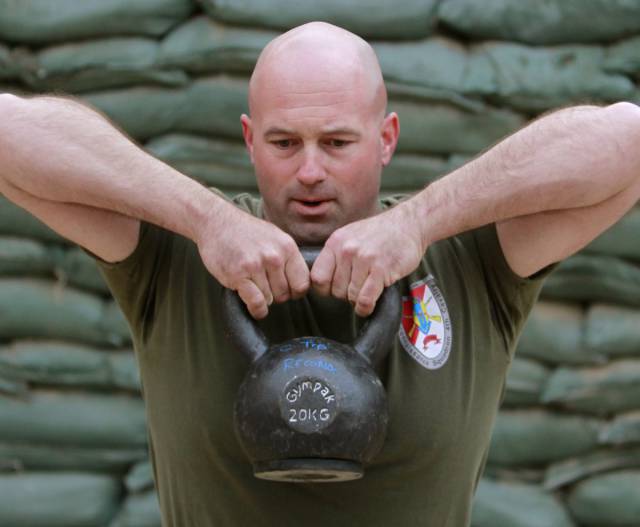 A US Army soldier and a member of the Afghan Uniform Police arm wrestle prior to a joint patrol near Command Outpost AJK (short for Azim-Jan-Kariz, a nearby village) in Maiwand District, Kandahar Province, Afghanistan, January 28, 2013. 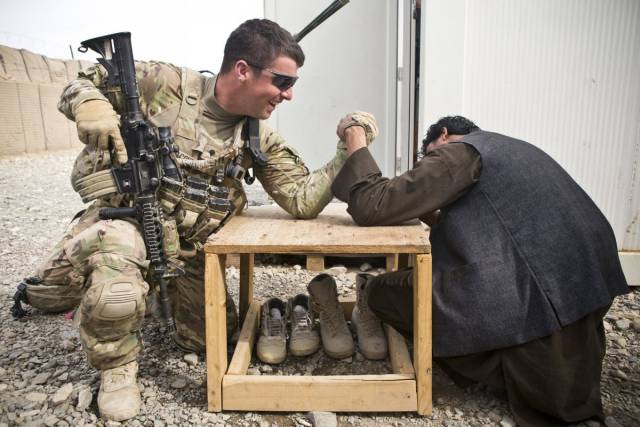 A US service member takes a "selfie" as President Barack Obama shakes hands with troops after delivering remarks at Bagram Air Base in Kabul, May 25, 2014. 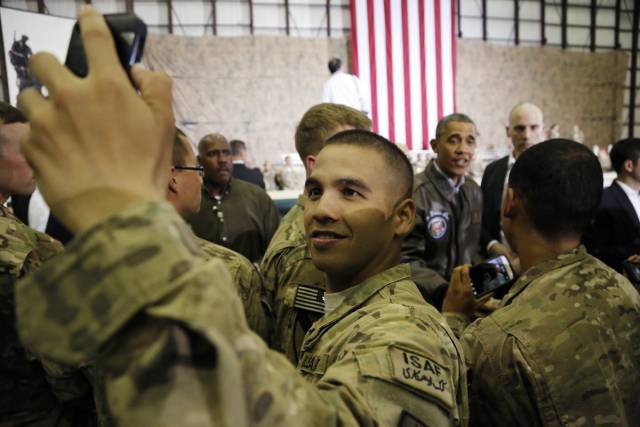 Afghan children gesture at US soldiers as they stand guard near an Afghan police checkpoint during a mission near Forward Operating Base Fenty in the Nangarhar province of Afghanistan, December 19, 2014. 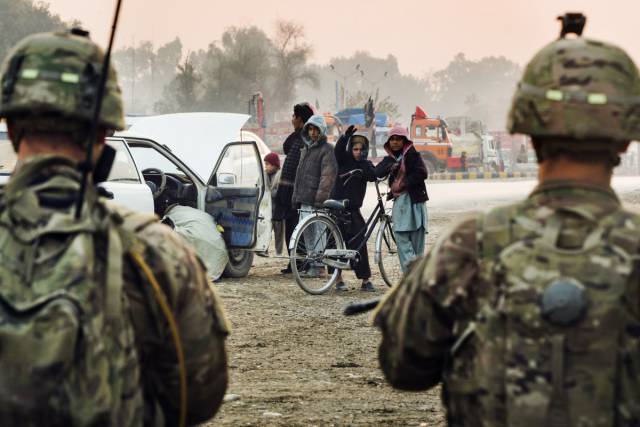 A US soldier keeps watch at the site of an explosion in Kabul, Afghanistan, January 4, 2016. 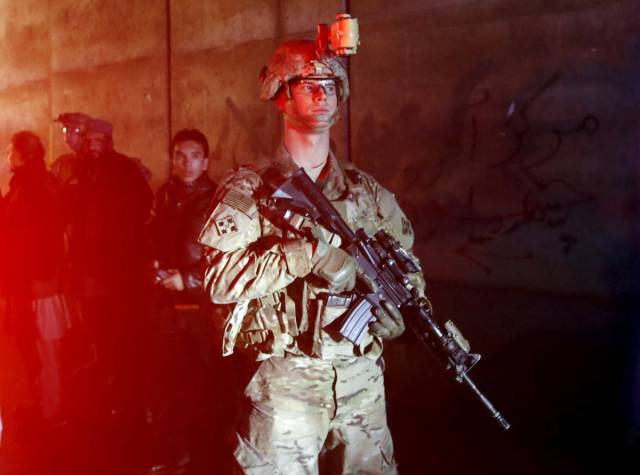 A large explosion struck close to Kabul airport on Monday, causing at least 10 casualties near to the area where a suicide bomber blew himself up earlier in the day in the latest in a series of attacks in the Afghan capital over the previous week.

On April 13, 2017, the US dropped the 21,000 pound, 31-foot-long GBU-43/B Massive Ordnance Air Blast bomb, called the "mother of all bombs," on camp belonging to ISIS' Afghan affiliate. Details about who it killed remain unclear. 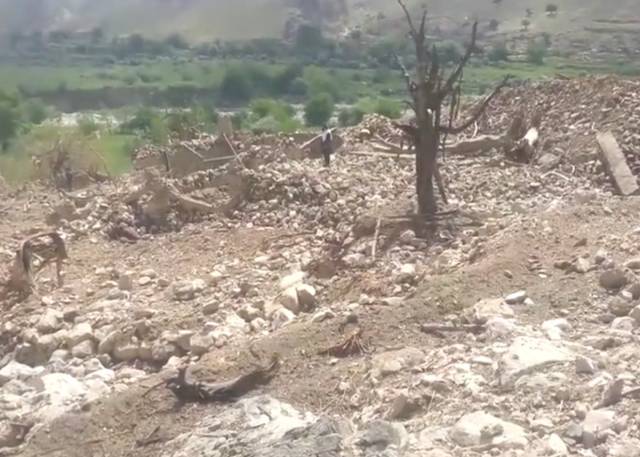 Member 2 year s ago
#16 No body armor, no helmet and no eye protection. Deserves to be beaten unmercifully by his colleagues for letting them down.
Reply