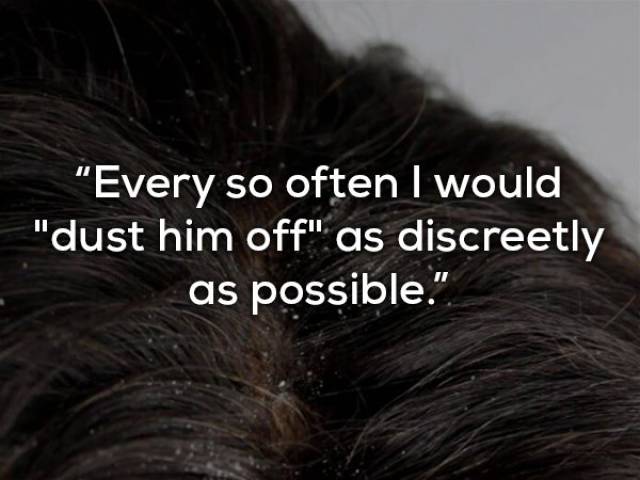 The groom asked me to “keep an eye” on his tux for signs of dandruff (he had a bad case of it at the time). I told him to choose a light-colored tux, but the bride insisted the guys wear black – a color that, of course, showed every particle of dandruff. So I placed a small brush in my pocket, and every so often would “dust him off” as discreetly as possible throughout the day. -Back2Bach 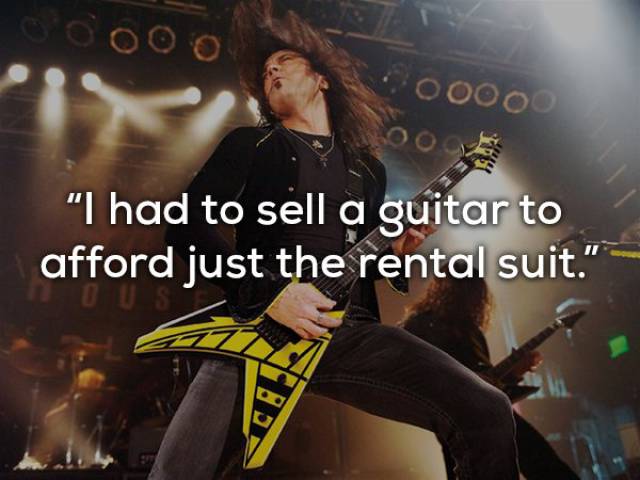 In college I was a best man for a wedding where the bride demanded we all wear designer suits. I had to sell a guitar to afford just the rental. I had no money before, and after I had no money and one less guitar. Then at the reception the groom pulled me aside and told me it was my job as best man to make sure their marriage went well. I was supposed to check in and help them with marriage stuff to make sure they didn’t get divorced. I looked him in the eye and said I can’t be responsible for your marriage. He didn’t talk to me from that second until just a couple months ago. 6 years after his wedding. -bearded_booty 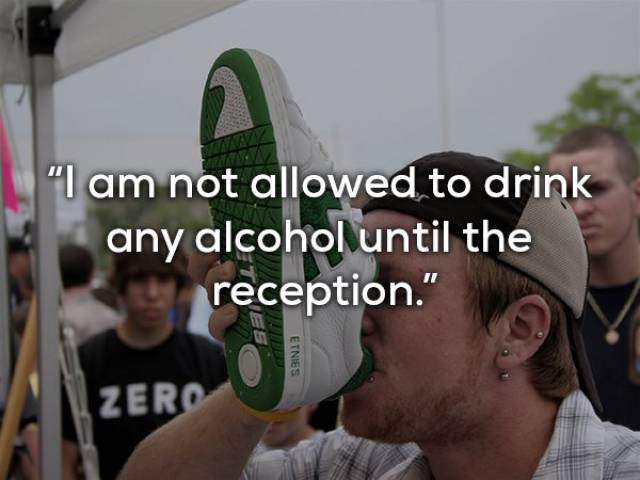 Best Man here. The wedding is in two weeks. I am not allowed to drink any alcohol until the reception because I turn a deep shade of scarlet. The bride doesn’t want to have a tomato in the wedding photos. I’m Korean and to be fair I understand. I know there are remedies but I don’t want to chance anything on their day. I was incredibly amused when my best friend awkwardly tried to relay this to me. -kelvin_oh89 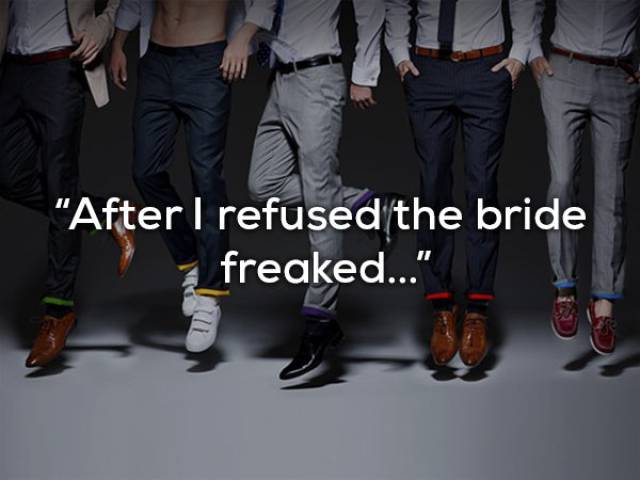 500 dollar pants. After I refused the bride freaked because it made the wedding party uneven. Groom bought my pants, I wore them once, they divorced. He seems a lot happier with his new wife. -UncookedMarsupial 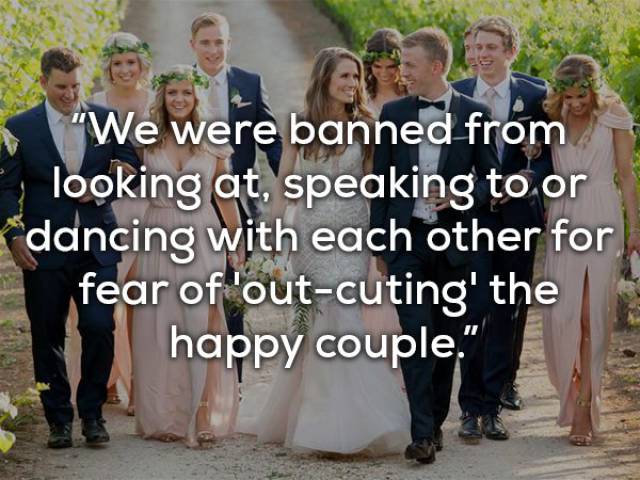 I was a bridesmaid and my SO was a groomsman, and we were banned from looking at, speaking to or dancing with each other for fear of ‘out-cuting’ the happy couple. We’d been together for 5 years at this point. We didn’t do it, but the request alone was outrageous. -TheMackeroll 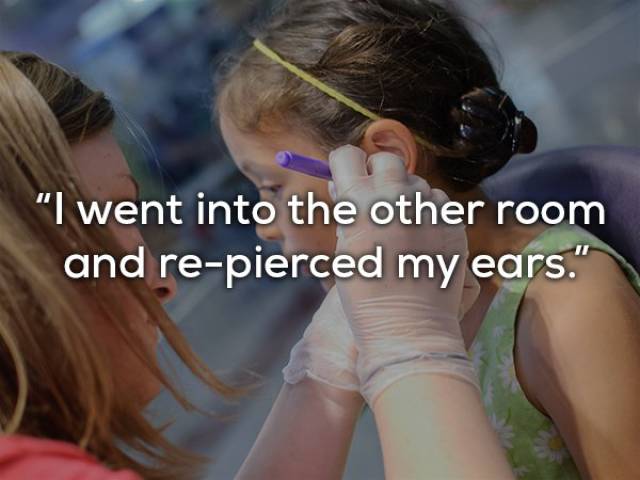 The bride bought us all earrings to wear on the day. I was met with a blank look when I told her the holes in my ears were closed over a while ago.. so one of the other bridesmaids (who happens to have quite a weak stomach for this kind of thing) and I went into the other room and re-pierced my ears. -LeiPewPew 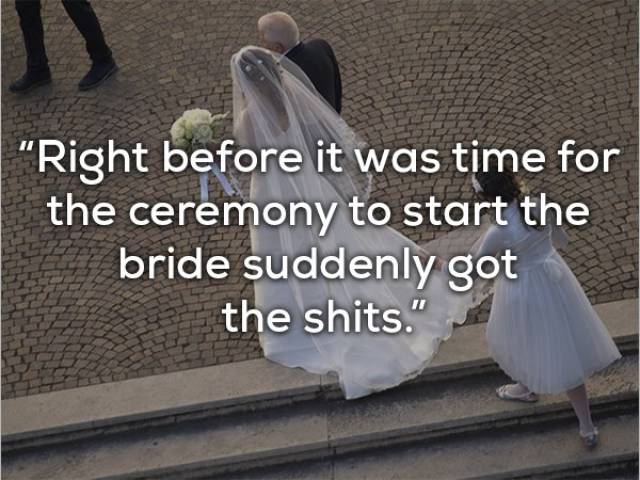 Luckily not me, but I was in the wedding party.. Right before it was time for the ceremony to start the bride suddenly got the shits but was wearing such a poofy dress she couldn’t do anything to help herself. The maid of honor and two other bridesmaids had to help her hold the dress and clean her up before walking into the church like she was a princess. -Tequilaa_Mockingbird 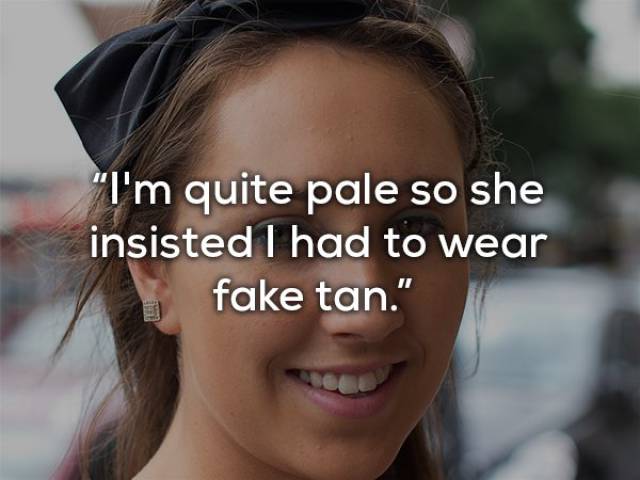 Bridesmaid to my sister. She demanded that I grow my fringe (bangs) out months before because quote “I don’t want anyone’s hair blowing in the wind, it all has to stay perfectly still”. Also, I’m quite pale so she insisted I had to wear fake tan. I originally went bought a pale tan color but the morning of the wedding she made me pile it on. It was pretty hot that day so subsequently, it stained my pale pink dress. Was still an amazing wedding regardless. Also, I like to think that when I get married I have two ridiculous request cards. Two things she has to do and I’ll bring up her wedding if she refuses. -Gooperchickenface 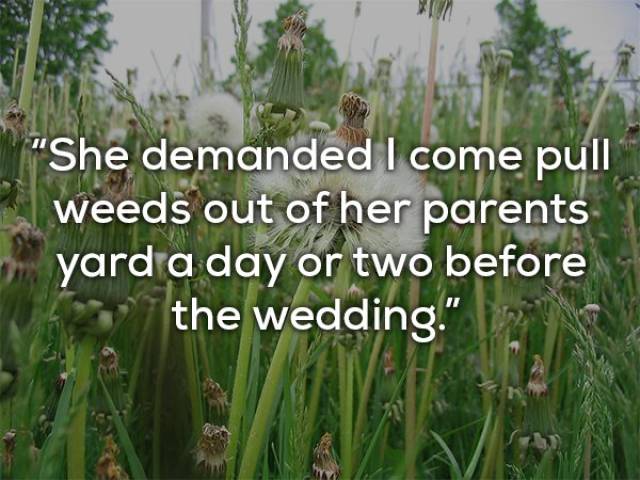 I was the maid of honor. She demanded I come pull weeds out of her parents’ yard a day or two before the wedding because the reception was at her parents’ house. I had already gone though multiple ridiculous requests the week leading up to the wedding, so this one I put my foot down and said no. Got through the wedding. No longer friends. She did send a gift when I got married. A centerpiece from HER wedding, that I had helped make. -radiolyss 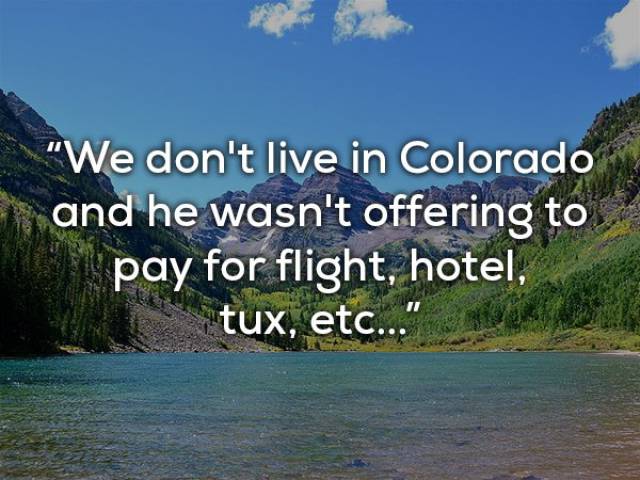 My friend decided to get married at a resort in Aspen. We don’t live in Colorado and he wasn’t offering to pay for flight, hotel, tux, etc… for anyone except him and his wife. They were broke 23 year olds just like us. Neither parents had the money either. It was a noon wedding and a 2 hour reception immediately following. That’s it. Everyone fly home. The bride and groom didn’t even stay the night. He got so mad at me when I told him we won’t be able to make it. 5 years later he still doesn’t talk to me. -turns31 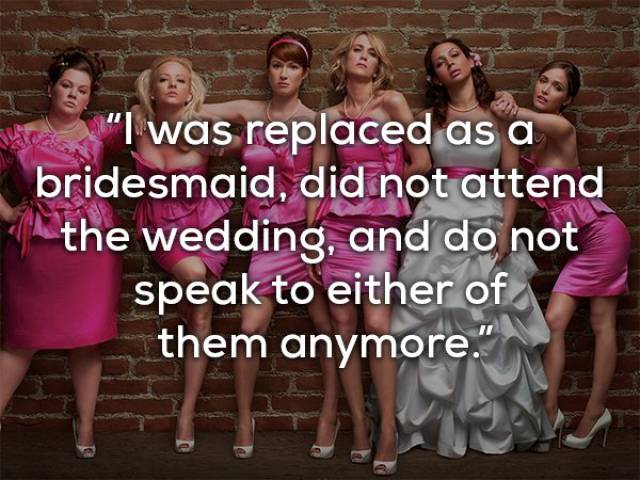 I was supposed to be a bridesmaid in a wedding of a male friend. I had tried to befriend the bride because the groom was a childhood friend. All of the planning leading up to the big day was a total shit show, and she used our wedding chat to constantly discuss all of her problems with the groom (ring was too small, they never talked about finances before getting engaged and now she’s not sure he makes enough, can you get a prenup for children you don’t have yet? Constantly telling us we were bad friends – keep in mind we are all friends with the groom for many years before she was in the picture). I could write a novel about it. The final straw for me was when she asked me to plan a bachelorette party, but couldn’t tell me anything about what she was interested in doing (clubbing vs spa day vs beach trip etc.) other than “nothing too wild, but definitely cost effective,” and when I presented her with a plan, told me I was a terrible friend and that was the worst bachelorette plan she had ever seen. I was replaced as a bridesmaid, did not attend the wedding, and do not speak to either of them anymore. -notplus8 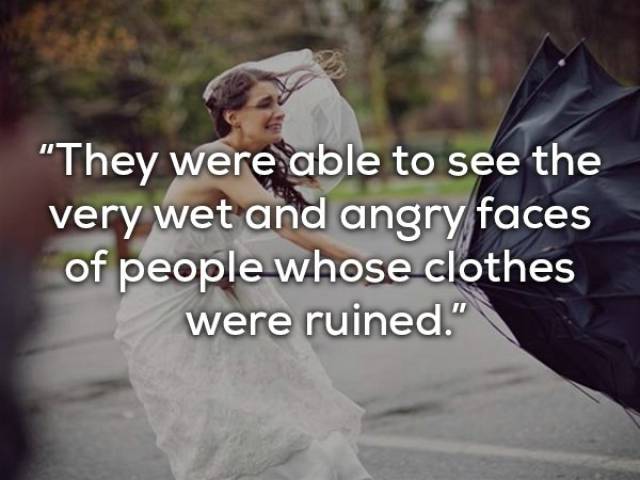 Outdoor wedding with no back up plan on the shores of Lake Michigan. Pouring rain and wind but the happy couple requested no umbrellas because they wanted to be able to see the faces in the crowd. They were able to see the very wet and angry faces of people whose clothes were ruined while the bride and groom stayed dry under the gazebo. -MajorMustard 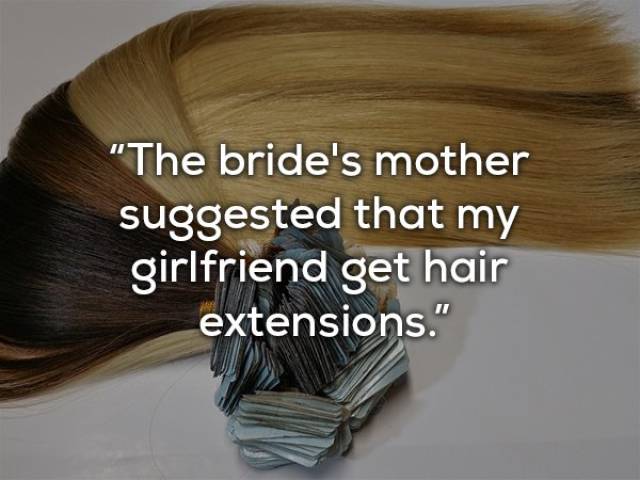 My friends were getting married, and my girlfriend and I were both in the wedding party. The bride’s mother suggested that my girlfriend get hair extensions to be in the wedding to not “ruin the photos” for her daughter. My girlfriend has very short hair because she has Grave’s disease. Her hair has become very brittle and started falling out in clumps. I’m sure it wasn’t intended to be rude, but telling somebody that have to put on a wig because you don’t think they look good enough to be in your daughter’s photos seems pretty terrible to me. -ILookLikeHyde 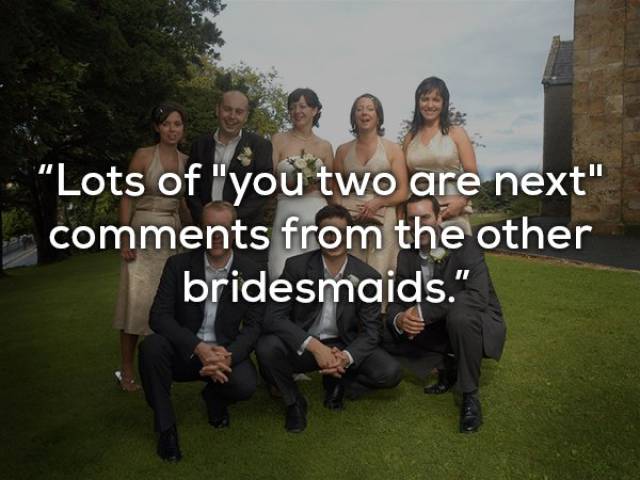 It was requested that I “show the maid of honor a good time” the night before the wedding day since she was from out of town, didn’t know anyone and was in the same hotel as me. I ended up banging her. The wedding day was awkward as fuck because in all the pictures we were holding hands and looking like a couple, but the whole time I did NOT want a relationship with her. Lots of “you two are next” comments from the other bridesmaids. Haven’t talked to her since. -PM_ME_ 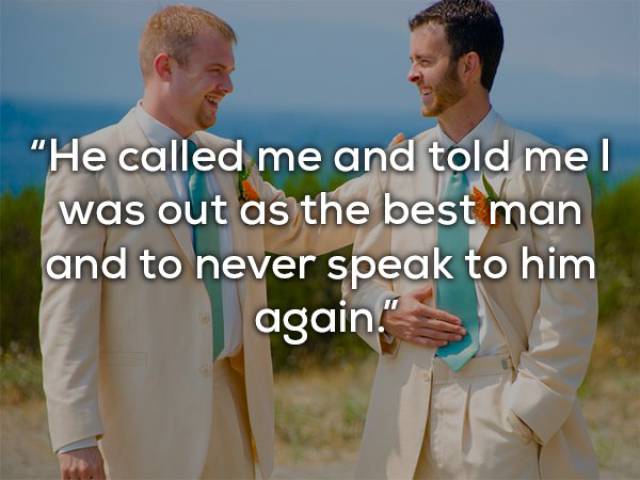 My friend was set to get married in November of 2016. He got engaged in October of 2015. From the time he got engaged until April 2016 he continued to add things on to my to-do list for the wedding. It seemed like once a month he’d say, “By the way, I need you to do this and buy this for the wedding.” My wife was also a bridesmaid. The bride had picked out very expensive outfits for the bridesmaids. $300 dresses, $150 shoes, and $75 costume jewelry. There was also a weekend at the beach planned for the summer and my wife was responsible for the food at the bride’s shower. I still have no idea what they meant by “being in charge of food,” as no matter how much we asked they acted offended. Does that mean provide food? Organize food? What kind of food was expected for the 40 people who were expected to come? No answers were given. In March 2016 my friend had pneumonia and was hospitalized. In total, he was down with it for about three weeks. During that time the wife and I talked about the wedding and totalled up how much it would cost us. We ended up with a figure of about $1,500 for a wedding an hour away from where we live, which we thought was absurd. The wife and I both worked, but didn’t make enough money to drop that much on someone else’s wedding. So when my friend healed up, I went by his house and told him the wife was going to drop out as a bridesmaid as the cost had risen too high. We were also upset with how they had been treating us as friends. He was initially surprised, but then we continued talking. The next day, after getting an earful from the fiance I’m sure, he called me and told me I was out as the best man and to never speak to him again. -saintsfan