"This monumental storm has raged on the solar system's biggest planet for centuries," Scott Bolton, the Juno mission's leader, said in a NASA statement. 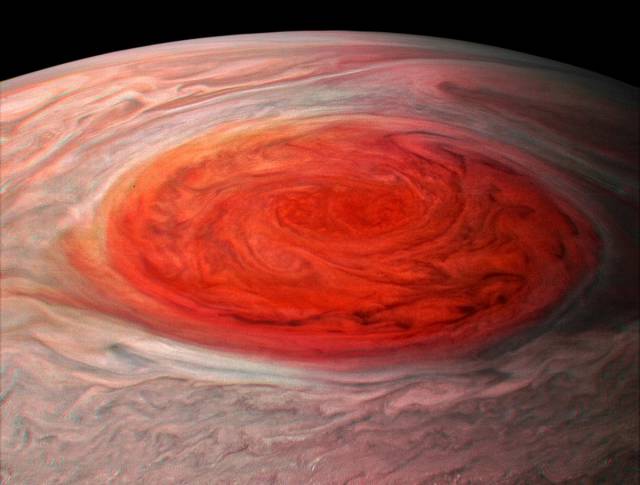 At its closest point, Juno flew so close the Great Red Spot that it couldn't capture the whole thing in one view. The image below shows the approximate angle that JunoCam was able to see at that point. Making the task even more challenging: The probe zoomed by at about 34 miles per second. That's speedy enough to traverse the continental US in a little more than a minute.

As a result, JunoCam strafed the planet with a series of images.

Getting within a cosmic breath of the storm allowed Juno to beam back images that show the Great Red Spot in unprecedented detail, like the ones below.

These remarkable 3D images show the depth of the storm's cloud layers. Winds in the Great Red Spot blow at speeds of about 400 mph. 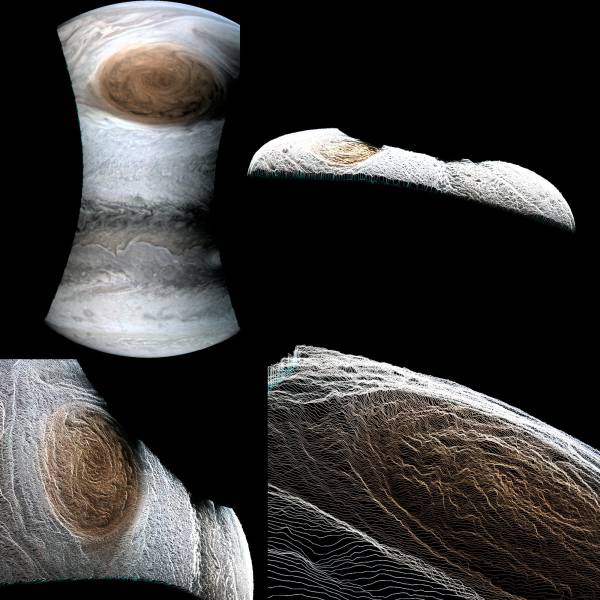 Candice Hansen, a senior scientist at the Planetary Science Institute, told Business Insider in an email that "this will not be the only flyover of the Great Red Spot planned, but it is the closest."

This composite image places one of Juno's new, detailed images of the Great Red Spot on top of an image of the planet captured by Voyager 1 in 1979. 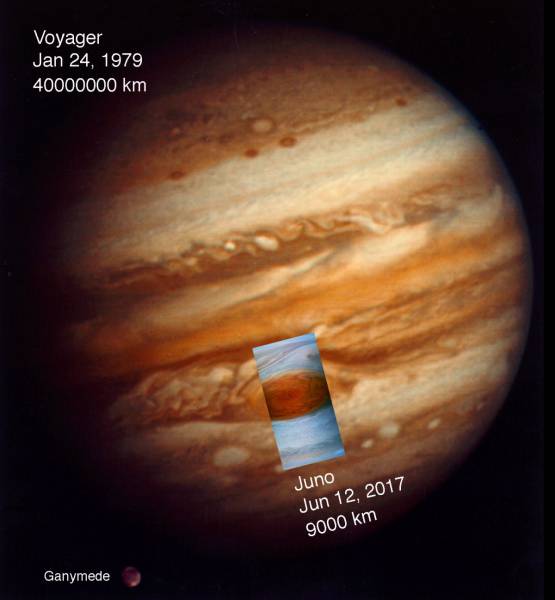 The image from Voyager was taken from a distance of nearly 25 million miles (40 million km), whereas Juno flew just about 5,600 miles (9,000 km) over the Great Red Spot.

In the bottom left corner of Voyager's image is the moon Ganymede.

In previous flybys, Juno has captured remarkable shots of other storms and clouds on Jupiter. NASA calls the enormous storm in the image below the "Little Red Spot" — even though it's the size of Earth. The photo was taken on Feb. 2, 2017. 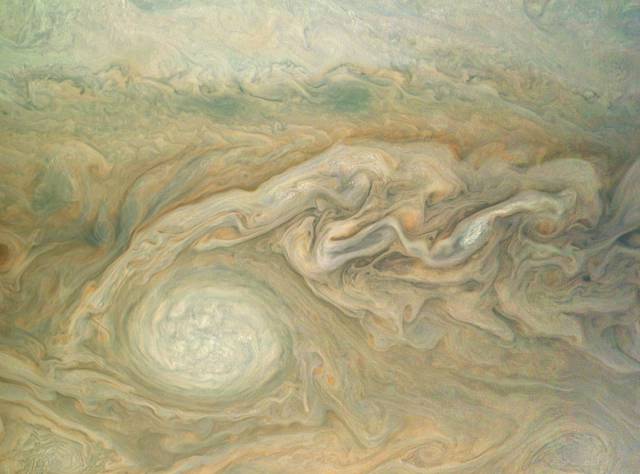 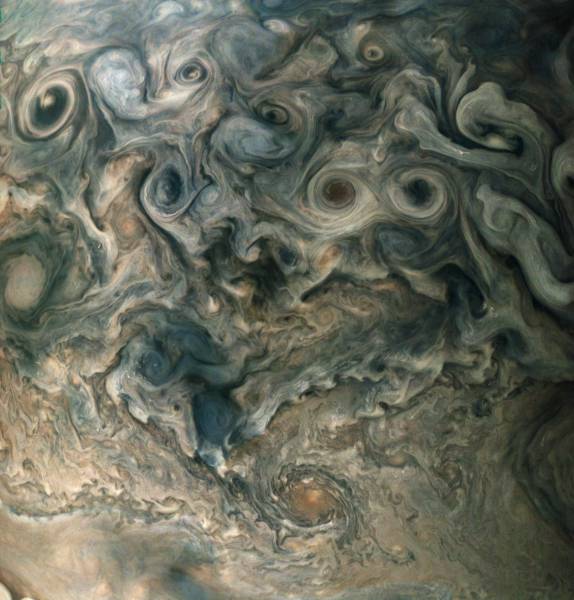 And this is part of the Jupiter's "string of pearls" storm cloud. The image was taken during Juno's fifth flyby, on March 27, 2017. 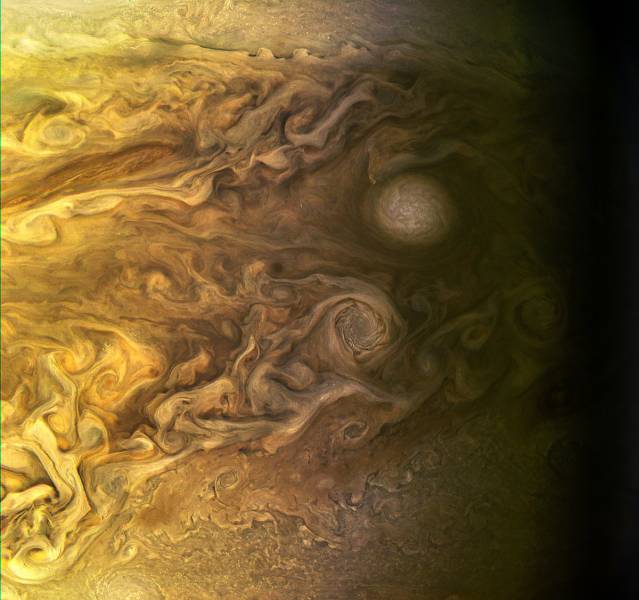 Juno has also captured more distant images of Jupiter. This striking view of the planet's south pole was taken May 19, then processed by two "citizen scientists" to bring out the photo's contrast and color. 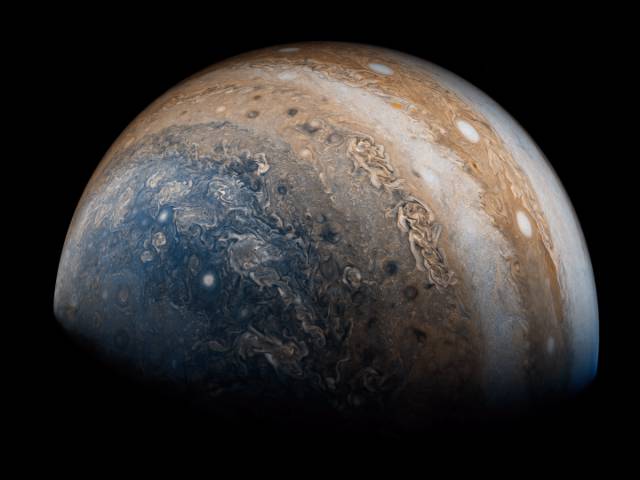 A straight-down view of Jupiter's pole from about 32,000 miles away reveals a blue-tinted patch of cyclonic storms that are each about 600 miles wide. For reference, the US state of Texas is about 790 miles wide. 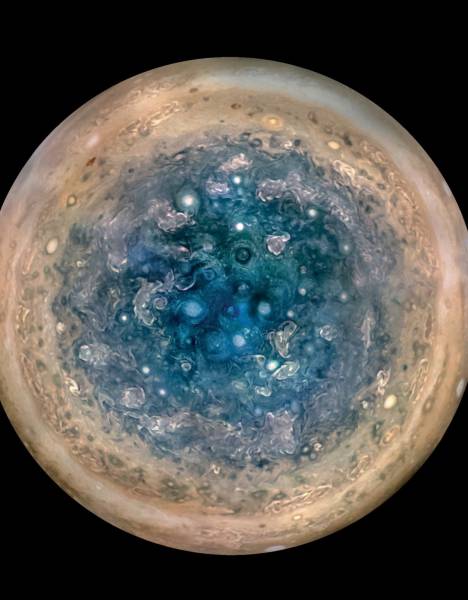 Juno also occasionally looks out away from Jupiter, toward the rest of space. This image may not seem like much, but it's unprecedented: The faint line in the middle is Jupiter's rings of ice and dust. Behind it sits the constellation Orion. Juno settled into orbit around Jupiter on July 4, 2016. Recent studies published in the journals Science and Geophysical Research Letters detailed a bounty of discoveries the probe has helped NASA scientists make since then. Those discoveries include "rivers" of hot ammonia shown in this infrared-light animation.

But Juno won't fly forever. NASA plans to plunge the spacecraft into Jupiter's clouds in 2018 or 2019. This will prevent the probe from spreading any bacteria from Earth to the gas giant's icy, ocean-filled moons like Europa and Ganymede. 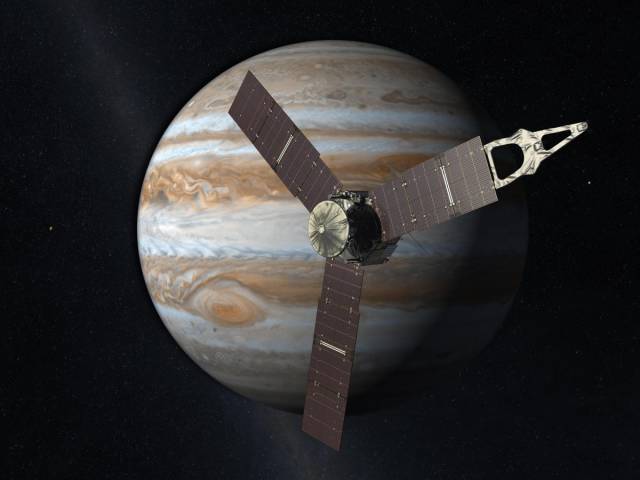