Vladimir Putin Has So Many Different Sides, As These Photos Show (28 pics)

Putin dances with a classmate during a party in St. Petersburg in 1970. 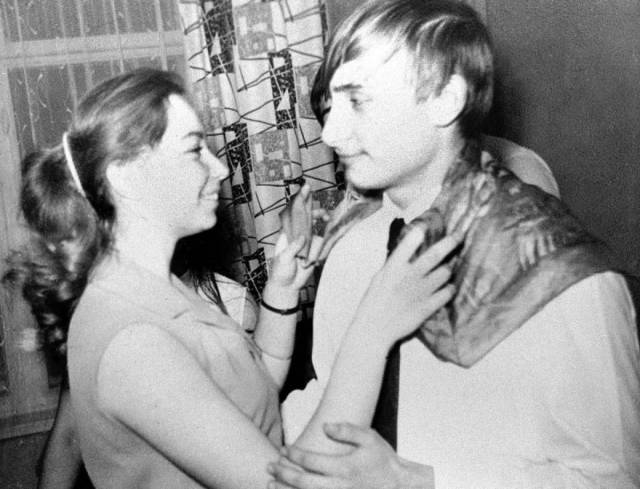 Putin wrestles with a classmate at the St. Petersburg Sportschool in 1971. 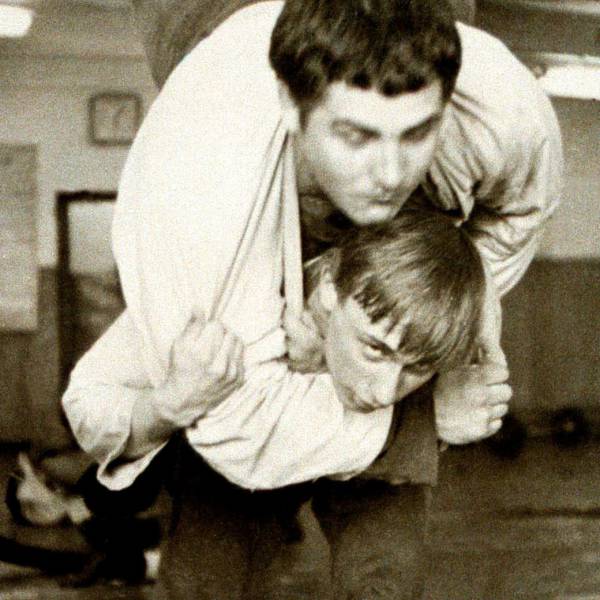 Putin feeds milk to a baby moose on June 5, 2010, during a visit to the Moose Island National Park in Moscow. 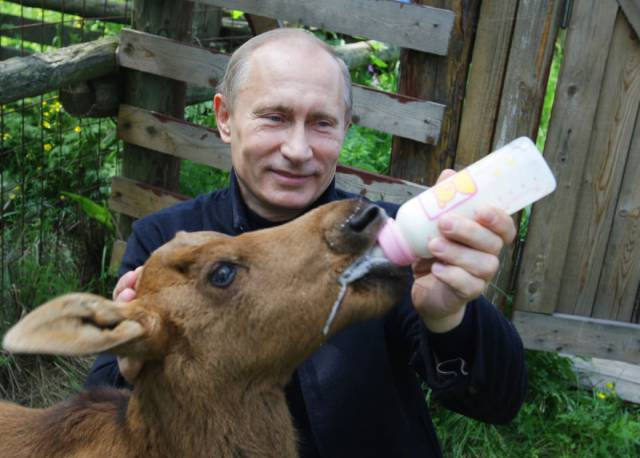 Putin pilots a motorized hang glider as he takes part in a scientific experiment aimed at preserving a rare species of cranes on Sept. 5, 2012. 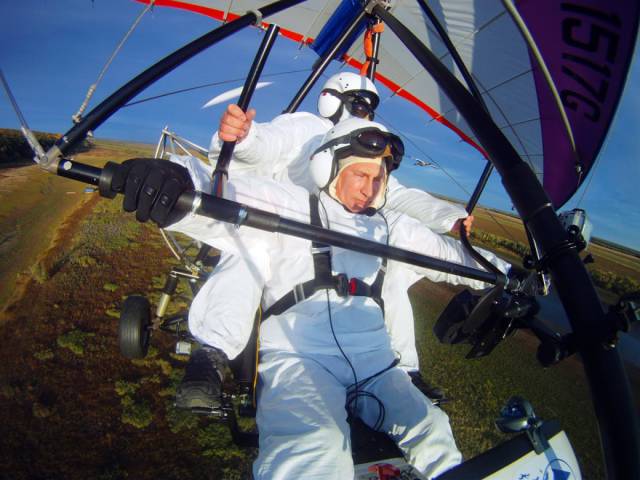 Putin falls while taking part in a gala hockey match with the teams of the Night League at the Shayba Olympic Arena in Sochi, Russia, on May 10, 2017. 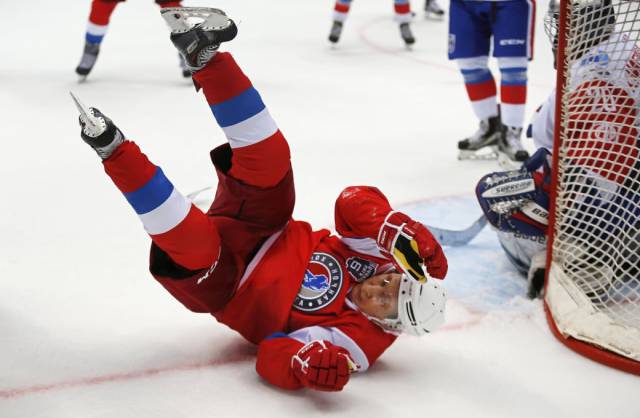 Putin feeds a horse during a vacation near the town of Kyzyl in Southern Siberia on Aug. 3, 2009. 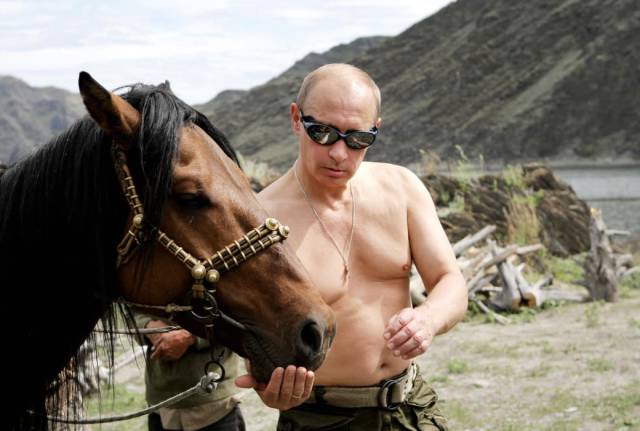 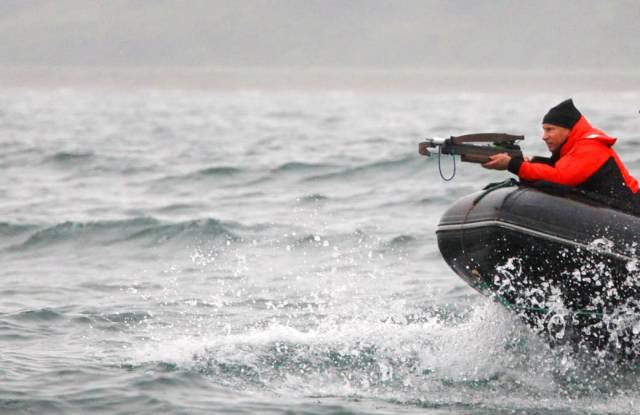 Putin tags a Siberian tiger while visiting the Barabash tiger reserve in Eastern Siberia on Nov. 23, 2010. 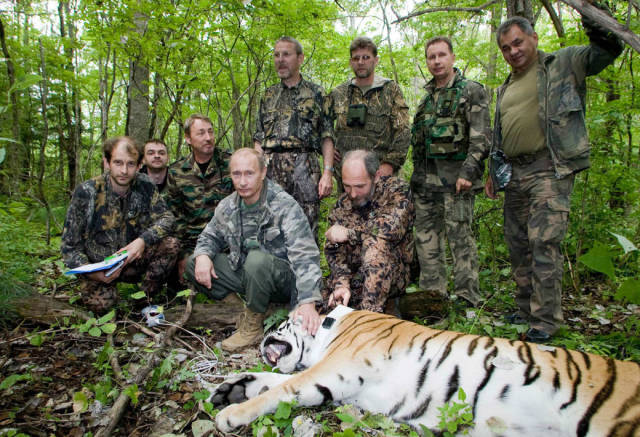 Putin plays with his dogs Yume (left) and Buffy (right) at his Novo-Ogaryovo residence on April 10, 2013. Buffy is a Bulgarian shepherd dog presented to Putin by Bulgarian Prime Minister Boyko Borisov, while former Japanese prime minister Yoshihiko Noda offered Yume as a gift to Putin during a G20 summit in Mexico. 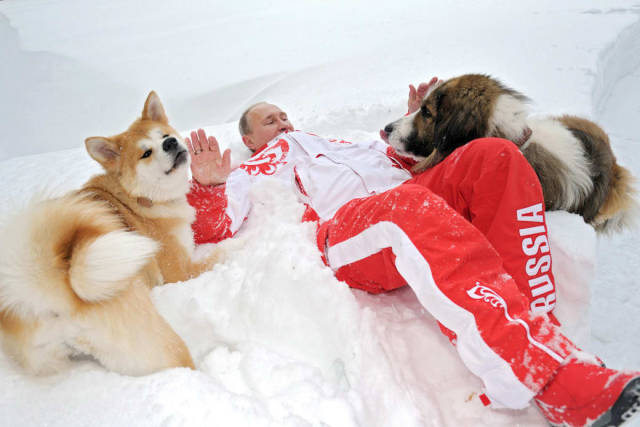 Putin and German Chancellor Angela Merkel react as an activist from the Ukrainian womens' rights group Femen protests during a visit to an industrial exhibition in Hannover, Germany, on April 8, 2013. 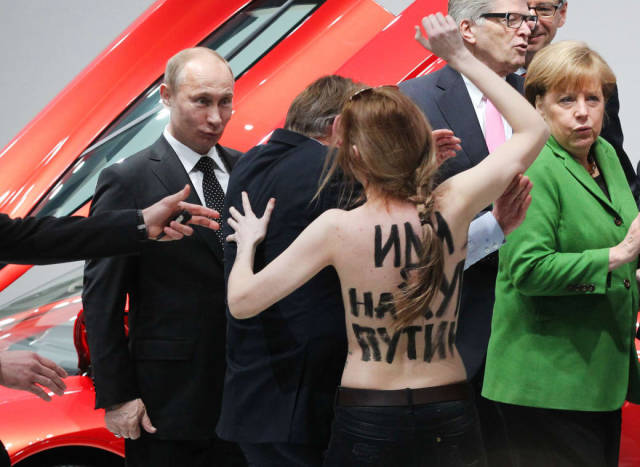 Putin rides in a submersible in the Baltic Sea near Gotland island on July 15, 2013. The vessel dived to the sea floor to explore a sunken ship in the Gulf of Finland. 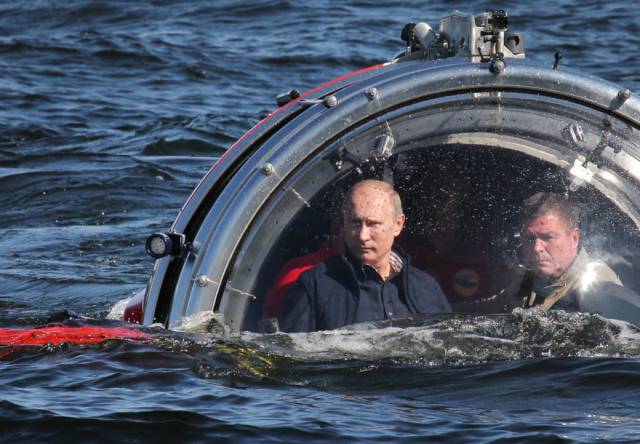 Putin visits the cave of Arctic Pilots Glacier on the remote Franz Josef Land archipelago in Russia on March 29, 2017. 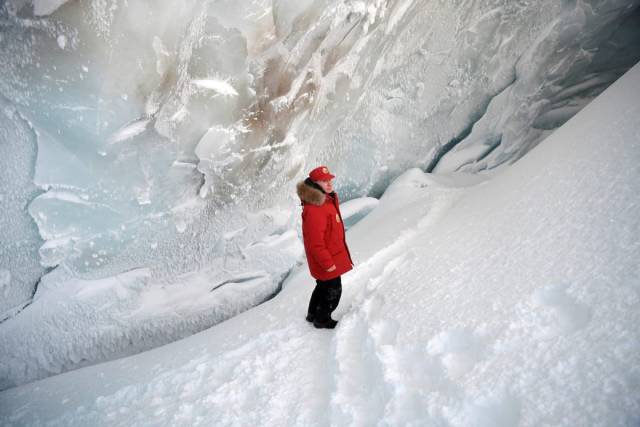 Putin shakes hands with a walrus during a visit to an oceanarium on Russky Island on Sept. 1, 2013. 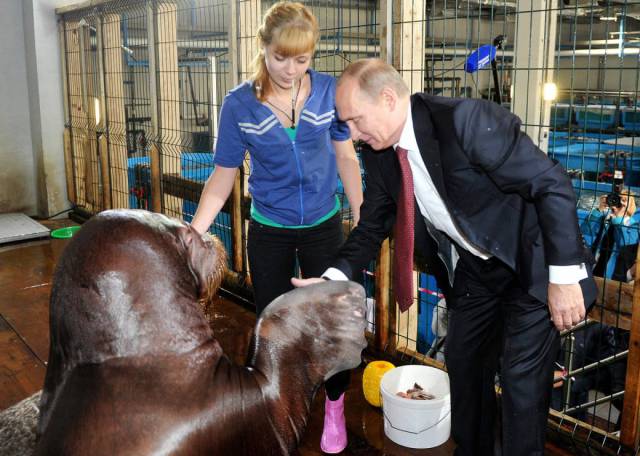 Putin and Australia's then-prime minister Tony Abbott meet a pair of koalas before the start of a G20 summit meeting in Brisbane, Australia, on Nov. 15, 2014. 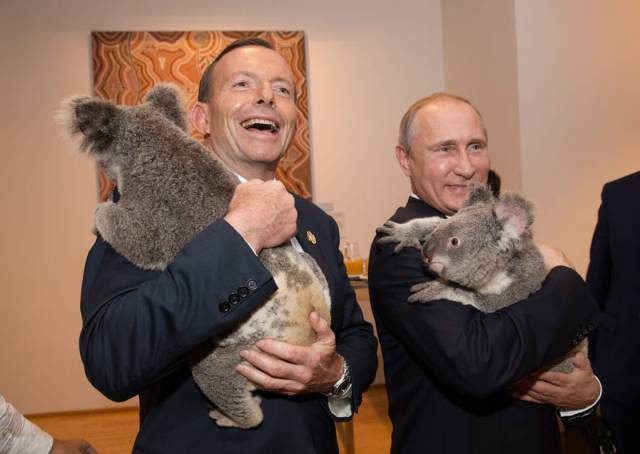 Putin practices with the Russian national judo team during a training session in Sochi on Jan. 8, 2016. Putin is passionate about judo, and has a black belt in it. 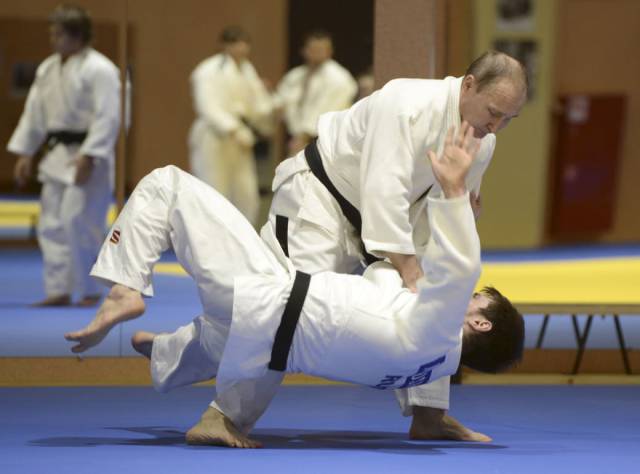 Putin demonstrates a hold to a young judo wrestler in the Siberian city of Kemerovo on Jan. 24, 2012. 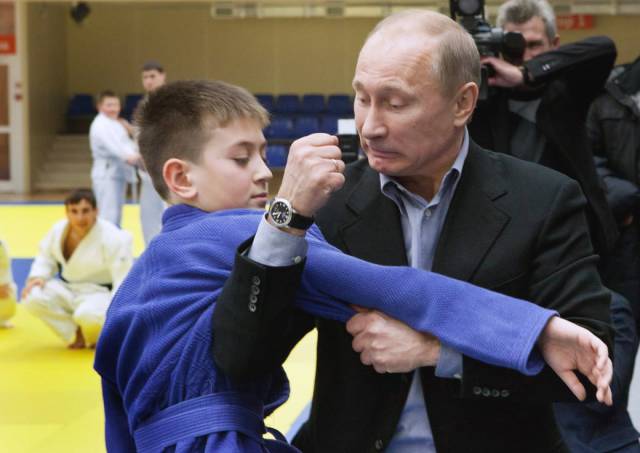 Putin arm wrestles a woman during mid-summer festivities in Kazan in the Tatarstan region of Russia on June 25, 2000. 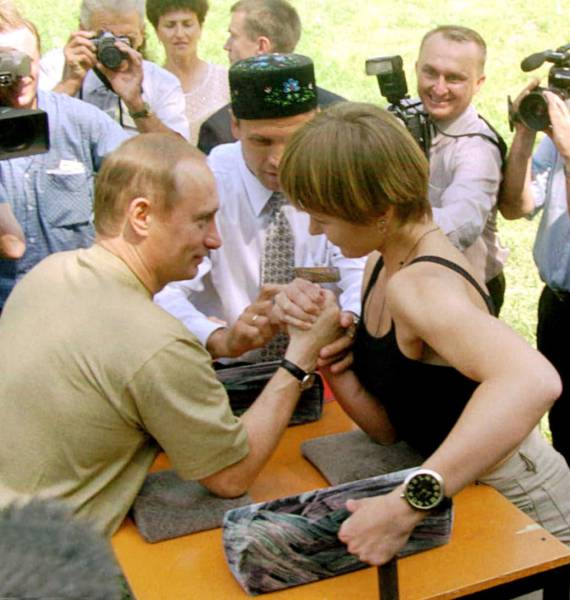 Putin tries his hand at pottery while visiting the ethnographic village of Verkhniye Mondrogi in Karelia, Russia, on Aug. 21 2001. 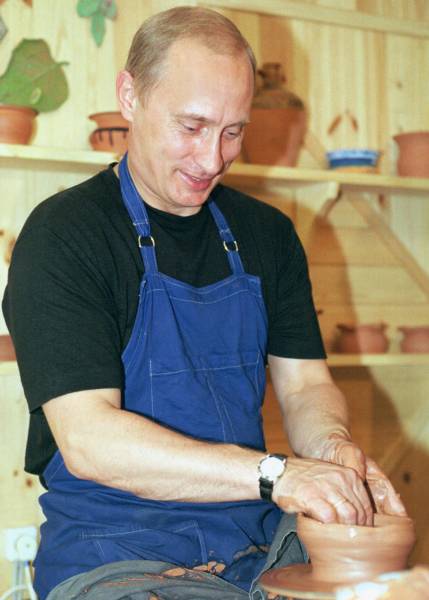 Putin and scientists measure a polar bear on the island of Alexandra Land in the Franz Josef Land archipelago on April 29, 2010. 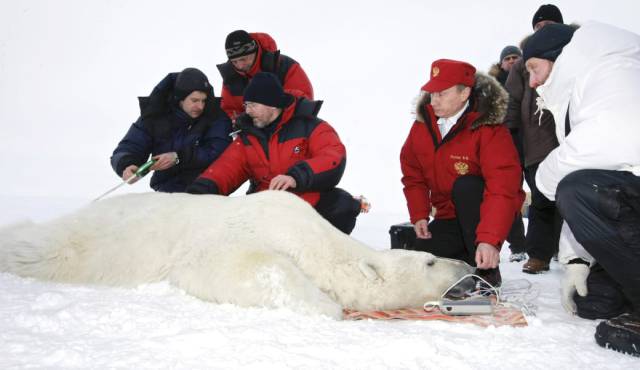 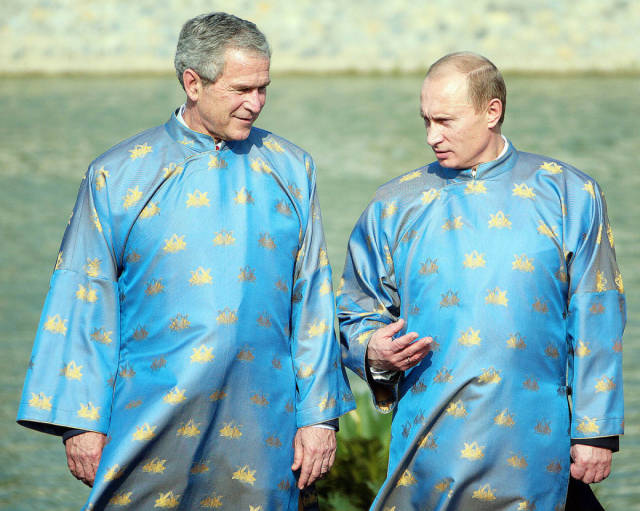 Holding a dentist's drill, Putin shares a joke with the governor of Belgorod region, Yevgeny Savchenko, during a visit to a hospital in the village of Golovchino on Nov. 15, 2011. 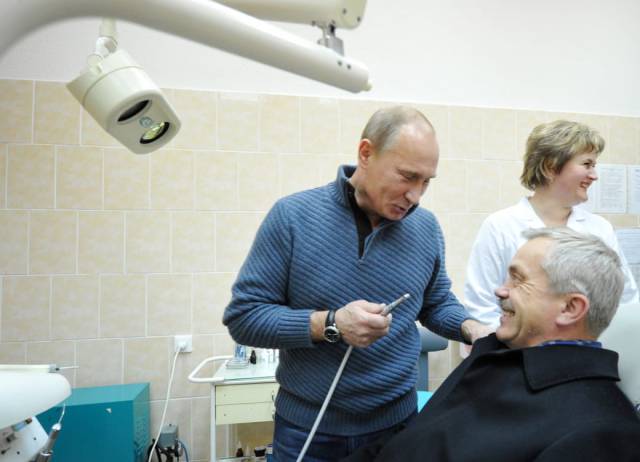 Putin takes aim with a replica of a Kalashnikov assault rifle in Moscow on April 26, 2012. 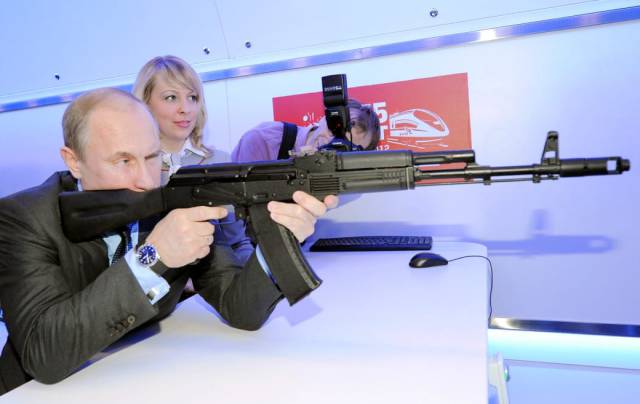 Putin holds a sword during a meeting with the crew of the film Viking on Dec. 30, 2016, in Moscow. Konstantin Ernst, the film's producer and director general of Channel One Russia, looks on. 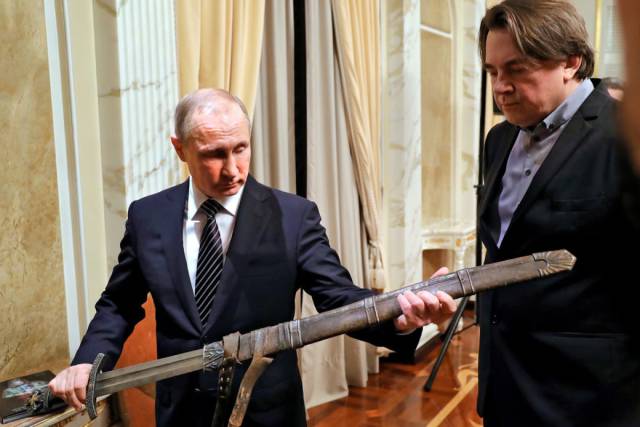 Putin visits the residence of Father Frost, the Russian equivalent of Santa Claus, in the Russian town of Veliky Ustyug on Jan. 7, 2008. 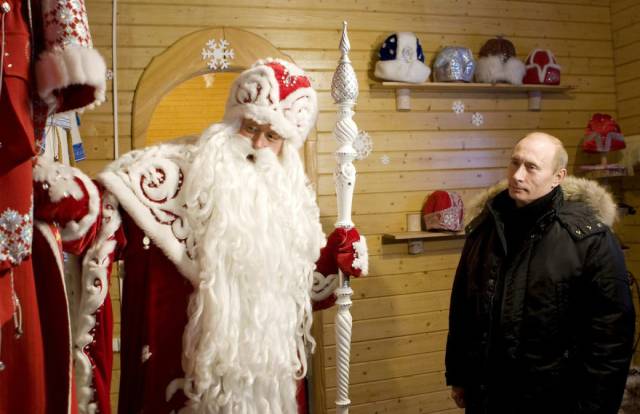 Putin attempts to avoid fizzing champagne at the Formula One Russian Grand Prix on Oct. 11, 2015, in Sochi. 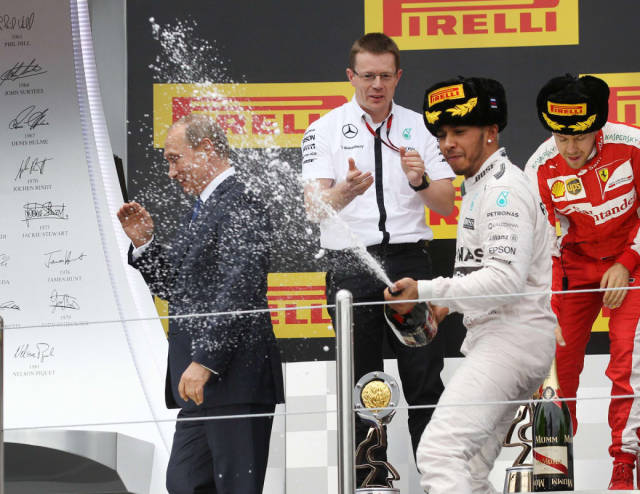 Putin works out at the Bocharov Ruchei state residence in Sochi on Aug. 30, 2015. 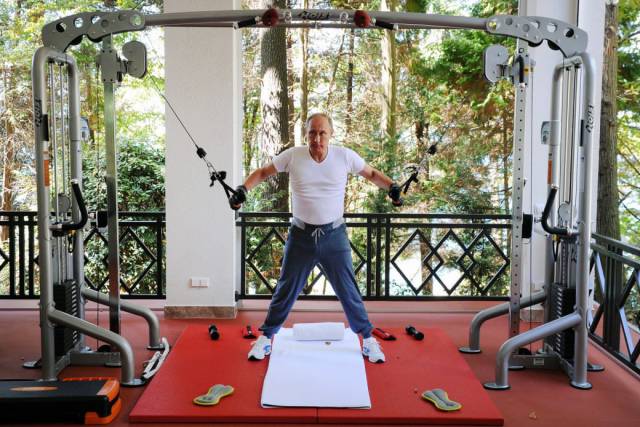 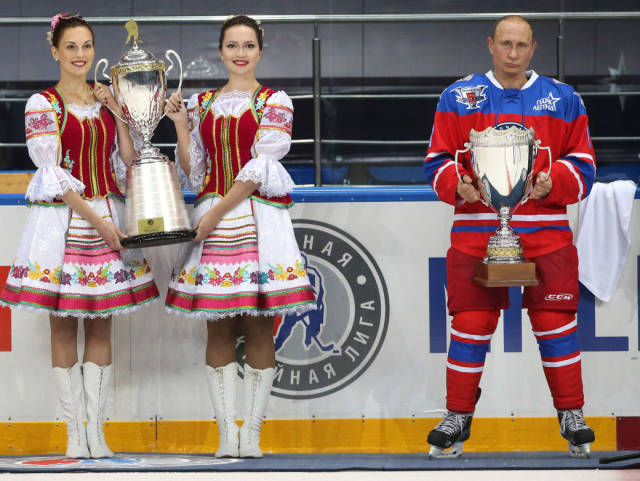 Putin winks to the camera prior to a working session with leaders of the G8 countries and five developing nations on June 8, 2007, in Heiligendamm, Germany. 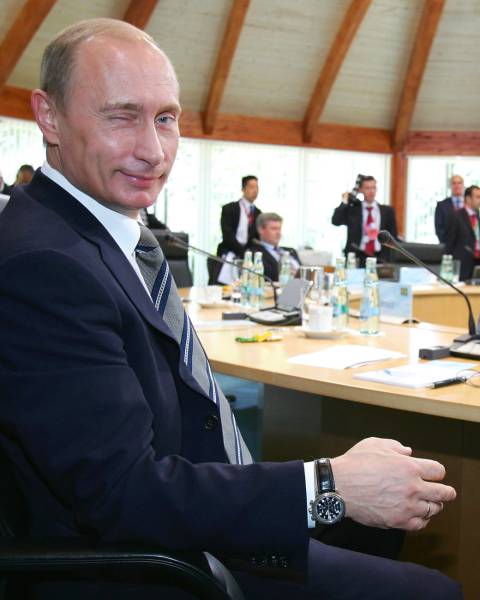