The City of San Francisco has recently put a cul-de-sac on sale, without knowing that most of it's residents were multi-millionaires. Now Tina Lam and Michael Cheng have bought the street and sidewalks and demand payments for "renting the parking spaces and the common ground", leaving wealthiest people in the city in peril. 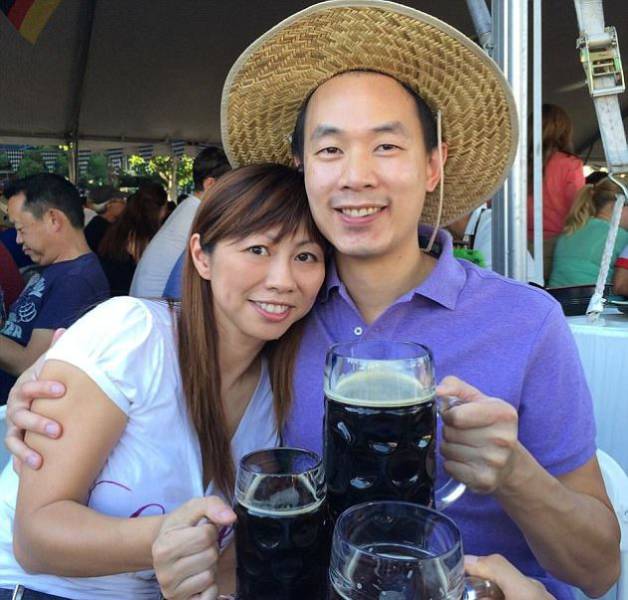 Welcome to one the most exclusive streets in San Francisco — a private cul-de-sac lined by $35 million mega-mansions.. 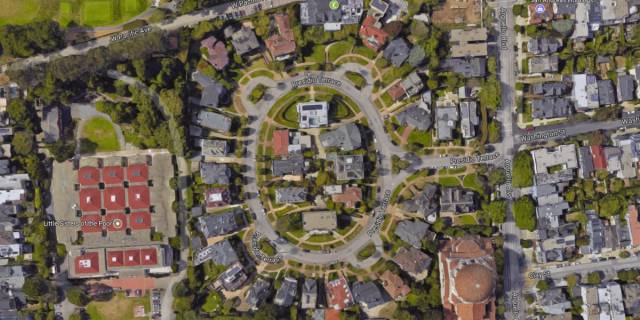 Presidio Terrace is a block-long, oval street (and private development) that has been run by homeowners who live there since at least 1905, the San Francisco Chronicle reported. 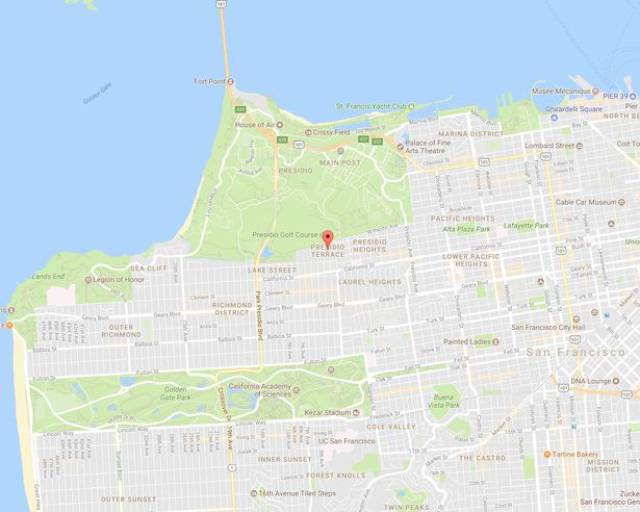 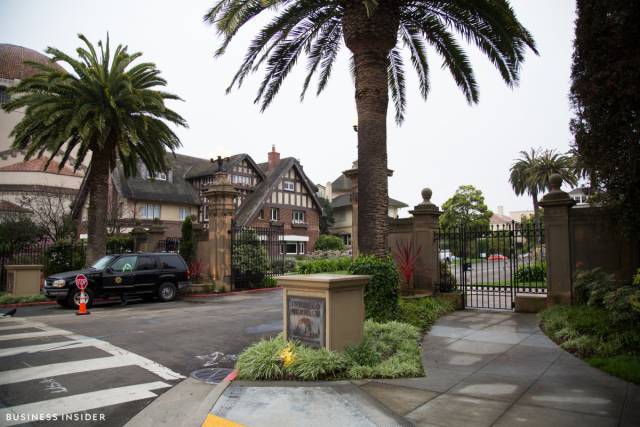 It has attracted some of the wealthiest and most powerful politicians in California over the years, thanks to enhanced security and its isolated location at the top of the peninsula. 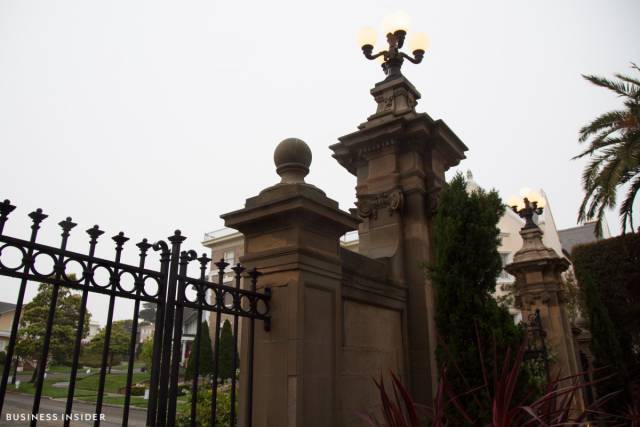 No one gets in or out without the hired private security knowing. A uniformed officer with Black Bear Security Services stands guard at the stone-gate entrance at all hours. 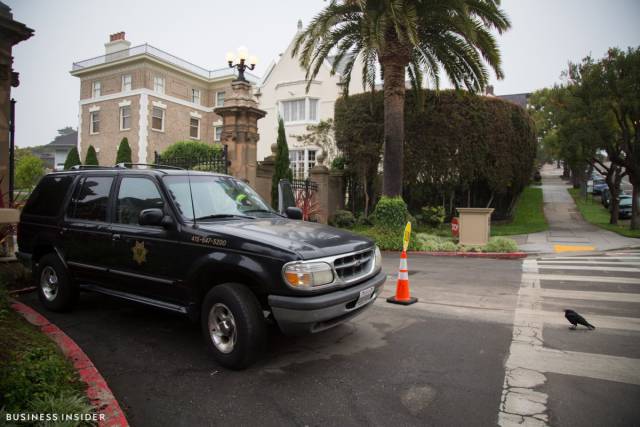 We peeped through the wrought-iron fence to see what Presidio Terrace is like. 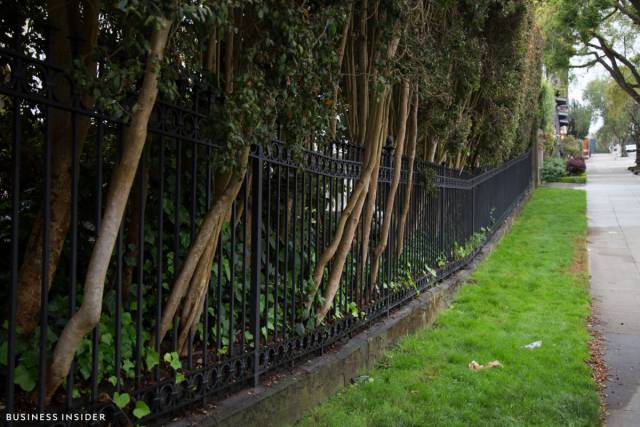 On the corner sits a Tudor-style home that once belonged to Sen. Dianne Feinstein and her husband, financier Richard C. Blum. Built in 1909, it contains 16 rooms. 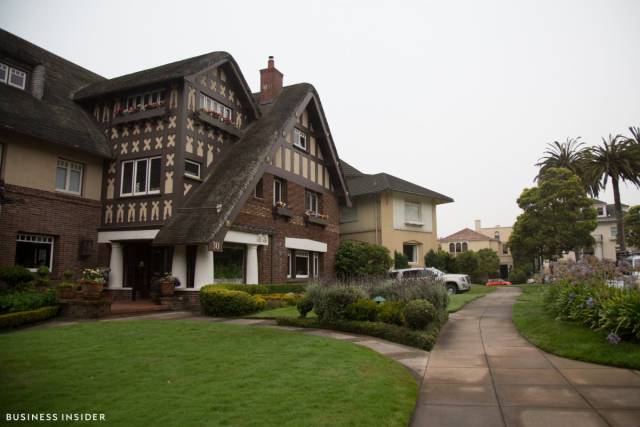 Feinstein grew up across the street from the home but always admired this mansion, with its storybook charm. She bought it through a family trust in 1985. 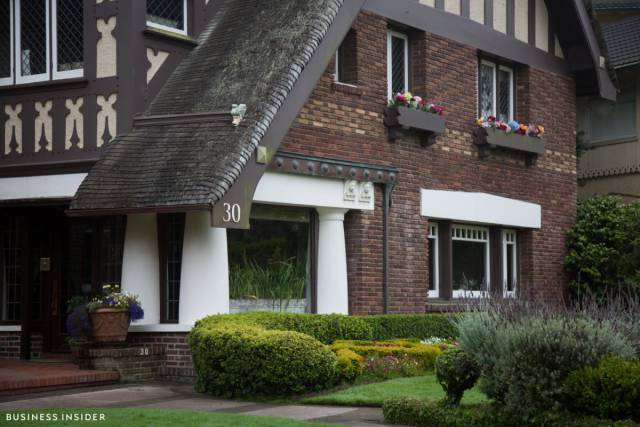 Feinstein later passed it on to her daughter, Judge Katherine Feinstein, who sold the property for $9.5 million in 2013, within weeks of listing it.

"She has loved this house since 1945 and I've told her it's just too much house for us right now and she said 'You know, life is short, be happy,'" the younger Feinstein told The Wall Street Journal.

House Minority Leader Nancy Pelosi once lived in a Mission-revival mansion further up the street. The Democratic Party held many fund-raising events there over the years. 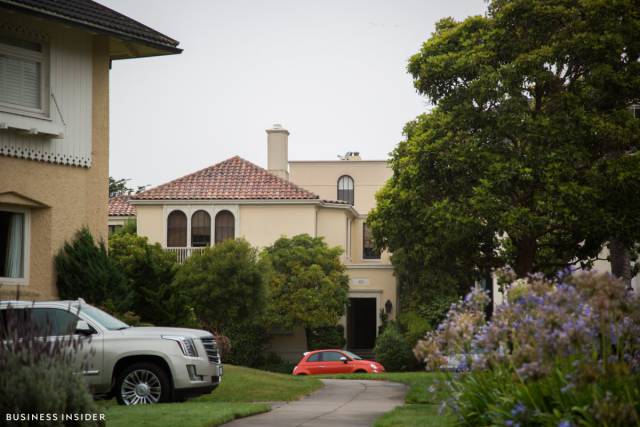 The home most recently sold in 1990 for $2.7 million, according to property records obtained online from the City and County of San Francisco Office of the Assessor-Recorder.

A white Beaux Arts estate at the top of the cul-de-sac (you can barely see it between the trees) belonged to Mayor Joseph Alioto. It boasts six bathrooms. 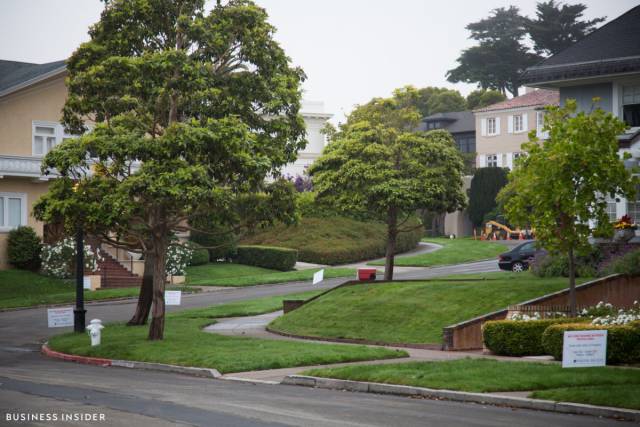 Alioto's former home most recently sold in 2013 for $9.5 million, according to property records. 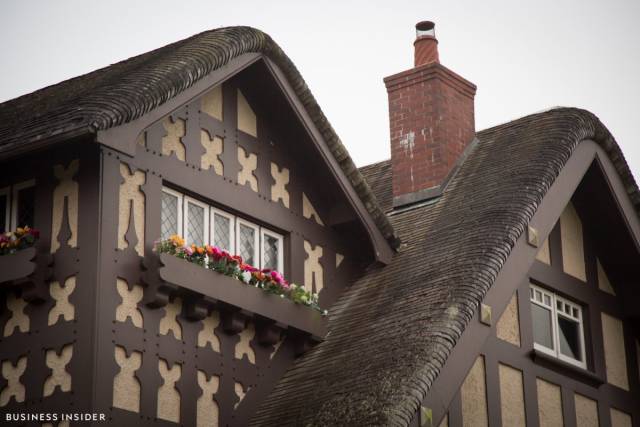 Residents pay an annual fee to the homeowner association. In 2013, that came out to $3,410 a home, according to a listing for Alioto's mansion. 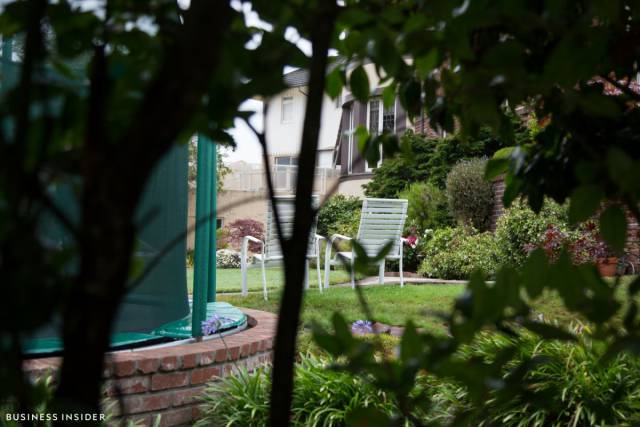 The association failed to pay a $14-a-year property tax for three decades. It claims the city sent the bill to an outdated address, which caused penalties and interest to stack up. 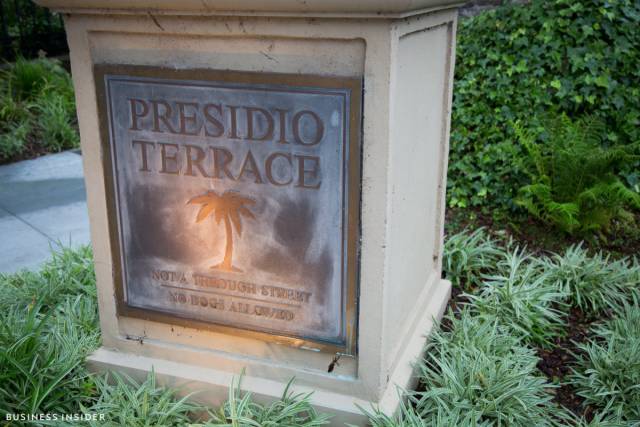 In 2015, the Office of the Treasurer & Tax Collector went looking for someone to pay up. It listed the street in an online auction to recover $994 in back taxes, penalties, and interest. 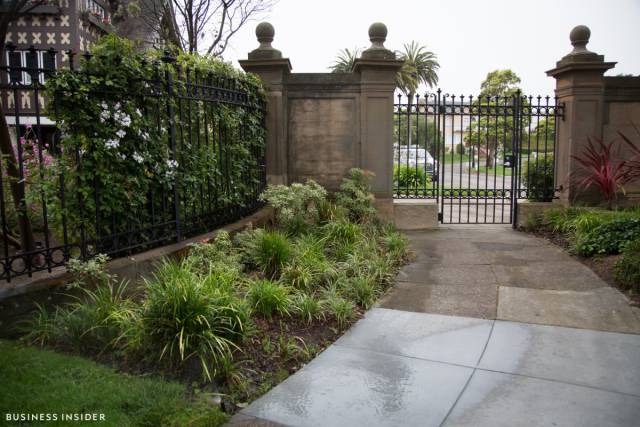 Along came Lam, a product line manager at the software company VMware, and Cheng, a real-estate agent who brokers investment opportunities for high-net-worth individuals. 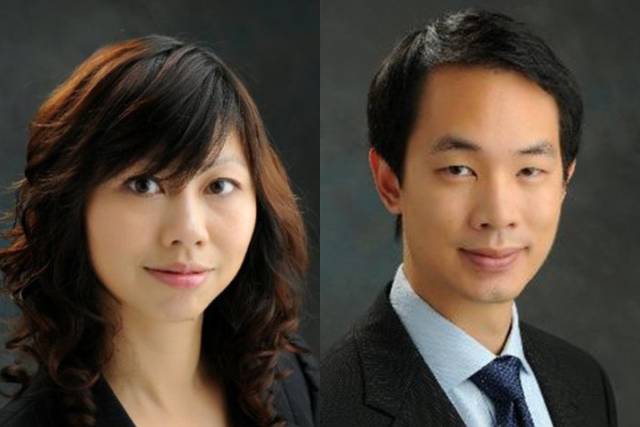 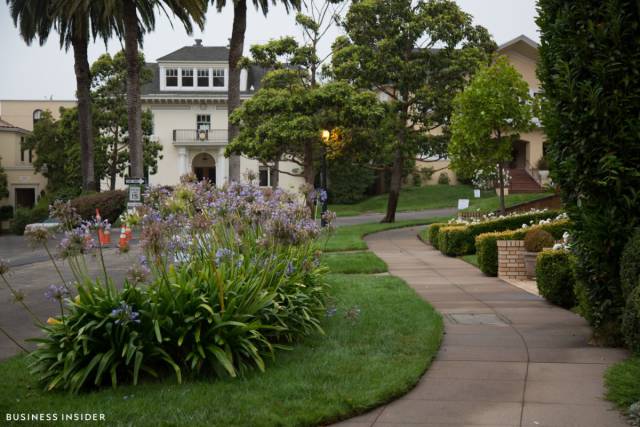 They own the palm trees and other greenery at the stone-gate entrance. 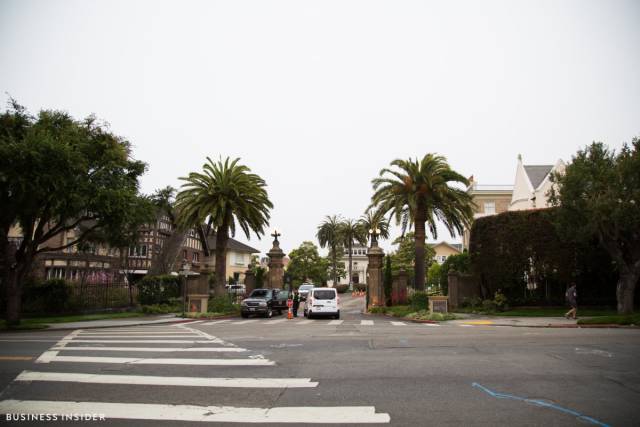 They own the sidewalks and these perfectly manicured shrubs. 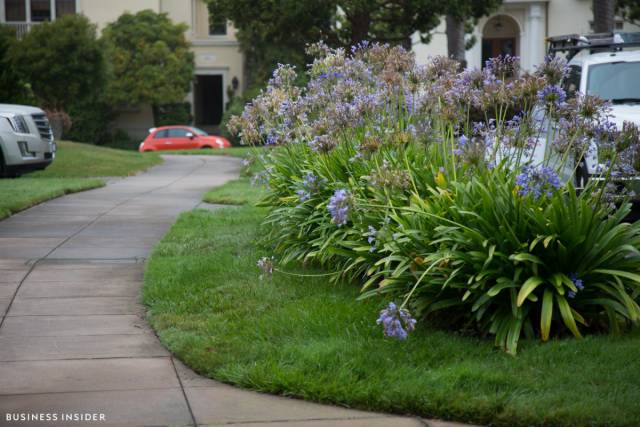 The stone fence that wraps around the gated community? Also theirs. 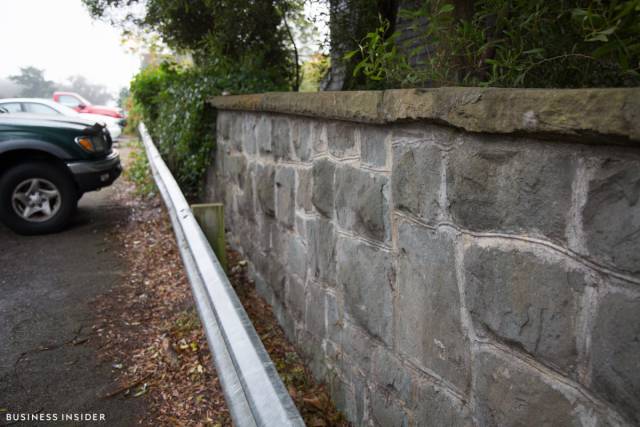 So is this "Game of Thrones"-style wall designed to keep out passersby. 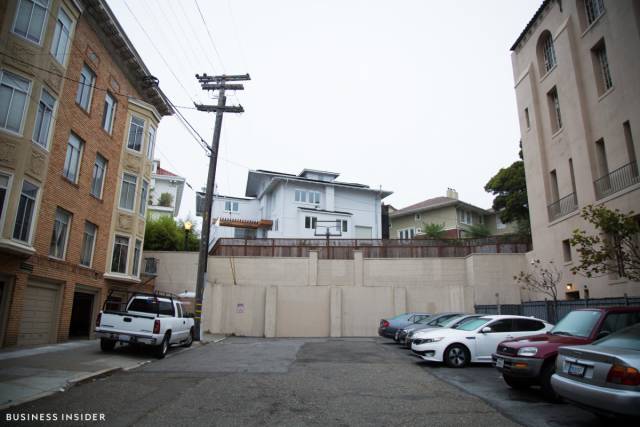 The couple is interested in charging the neighborhood's deep-pocketed residents to park on Presidio Terrace. "We could charge a reasonable rent on it," Cheng told the Chronicle. 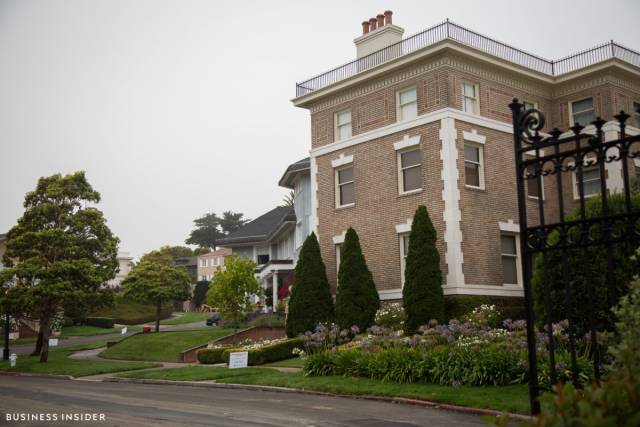 Unsurprisingly, residents are not happy — more than two years after Lam and Cheng scooped up Presidio Terrace without their knowledge. Many were first made aware of the purchase in May, when a title-search company working on behalf of the couple contacted them to see whether they were interested in buying back the property outside their homes. 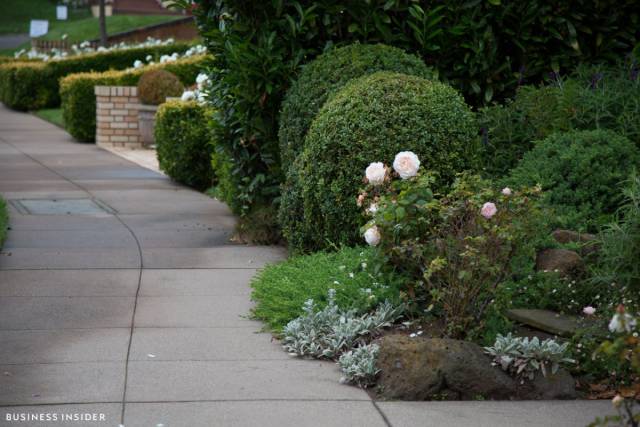 "I was shocked to learn this could happen, and am deeply troubled that anyone would choose to take advantage of the situation and buy our street and sidewalks," one homeowner, who asked not to be named because of a pending suit, told the Chronicle. 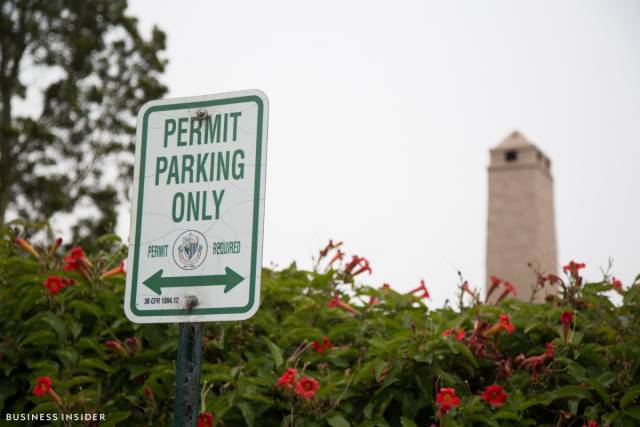 "We just got lucky," Cheng said of the bizarre purchase. 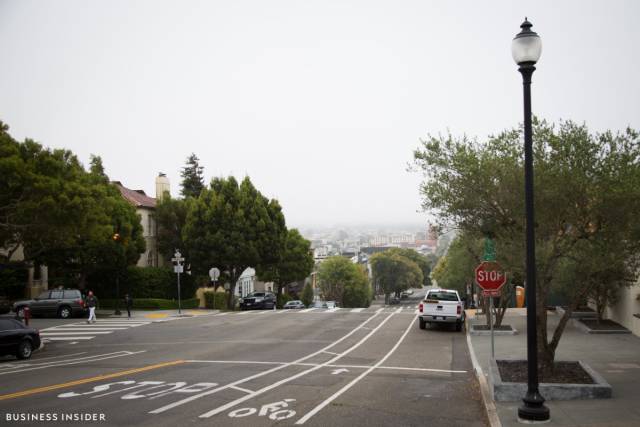 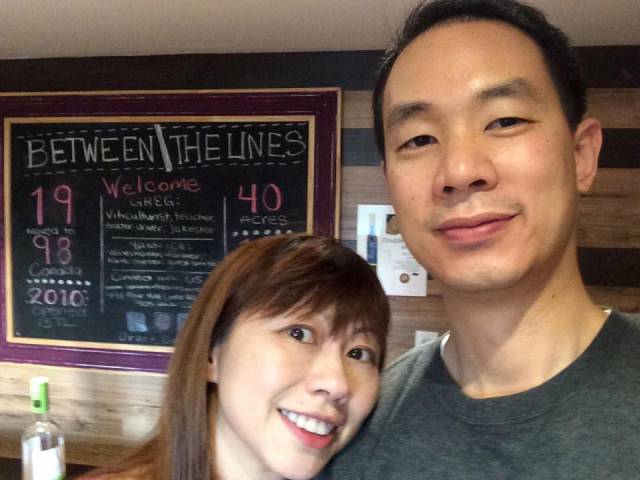 The_Tinman 4 year s ago
God bless you two. F*cking brilliant! Stick it to them, make them pay.
Reply
2

Shawouin 4 year s ago
They are rich, so it give you the right to be a complete dick, is it?

Do you have any moral guys?
Reply
0