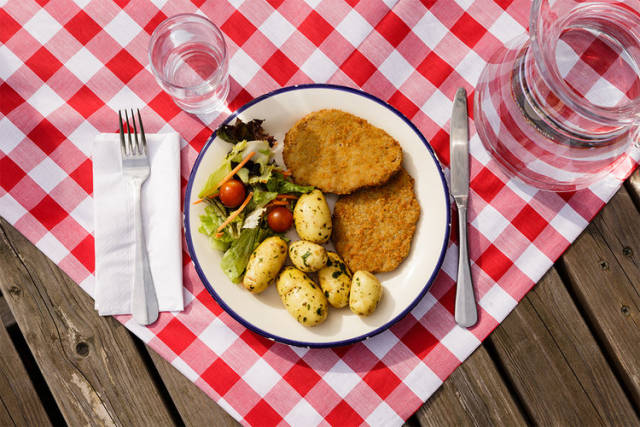 Austrian workers enjoy sitting down to a filling and substantial hot meal during their lunch break. One of Austria's national dishes, schnitzel, makes for the perfect option. Flattened meat is coated in breadcrumbs then fried, and is best partnered with buttery new potatoes and a fresh green salad. 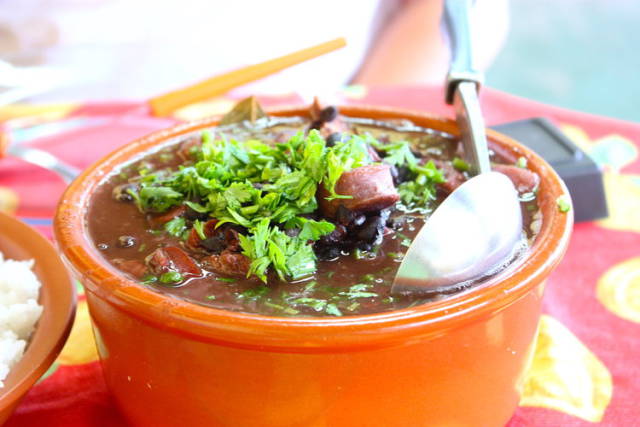 Feijoada is a slow-cooked stew of beans and meat in a rich gravy. This classic Brazilian dish can be found in barbecue restaurants or sold by street food vendors and is best served with rice, washed down with some refreshing coconut water. 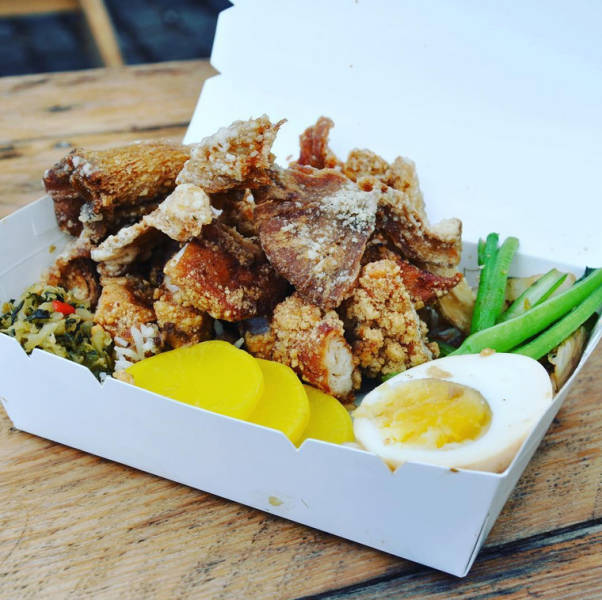 Chinese employees will either bring a packed lunch from home or buy a "bian dang" on their way to the office. This boxed up meal, whose name literally translates as "convenience," often contains rice, fried meat or eggs, dumplings, and vegetables.

Some employees in China are reportedly encouraged to take a short nap after lunch to encourage productivity in the afternoon. As a result, some establishments will give their workers up to two hours away from their desks in the middle of the day. 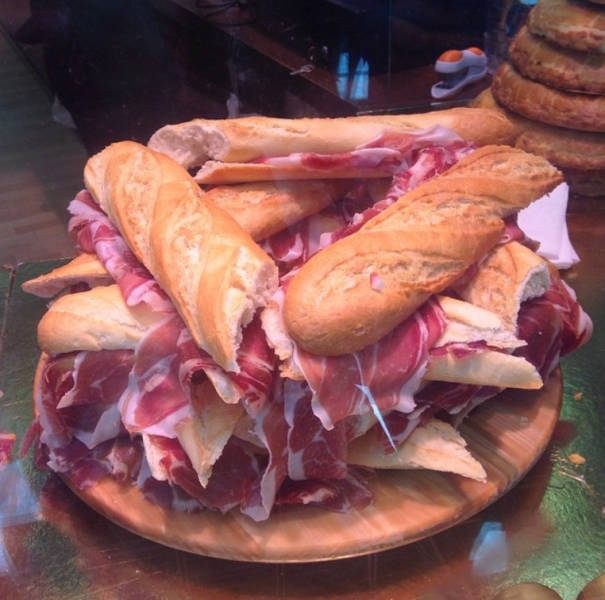 Crispy baguette packed with unsalted butter and slow-roasted 'Jambon de Paris' makes for a simple, classic, and delicious lunch in France. What's more, French office workers reportedly like to follow their sandwich with something sweet such as a slice of apple tart. 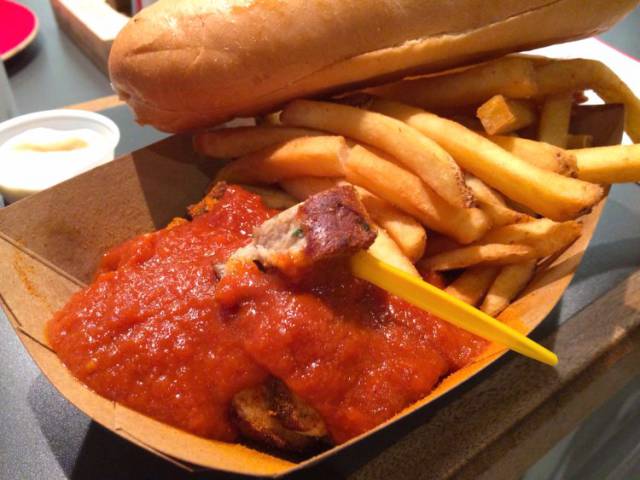 German employees prefer a shorter lunch break and would rather stay in the office building than head to a nearby shop or restaurant. Canteens are a popular option with few employees taking longer than half an hour away from their desk.

A typical office lunch in Germany consists of fast food favourite "currywurst" — griddled and sliced sausages topped with curry ketchup — and chips, chased by an apple and some water. 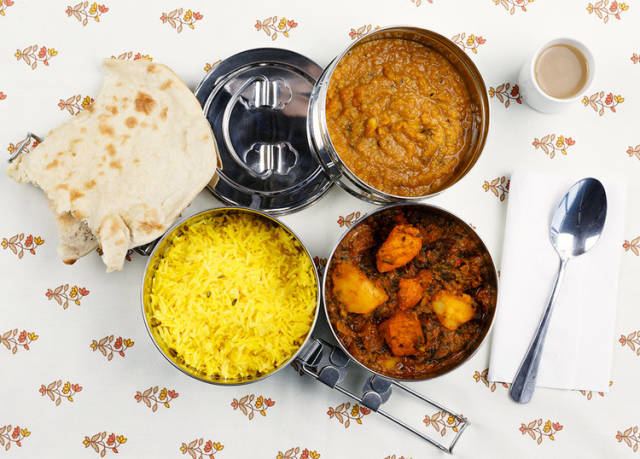 In India, lunch is very much a family affair — even if you're not sitting down to eat it all together.

Family members pack hot lunches in tiffin boxes for those at work. These are then collected by tiffin wallahs and delivered to the workers. This operation is very popular in India's bigger cities, such as Mumbai.

A tiffin box often contains a vegetable or lentil curry alongside rice or a chapati flatbread — all of which is followed by a cup of sweetened chai tea. 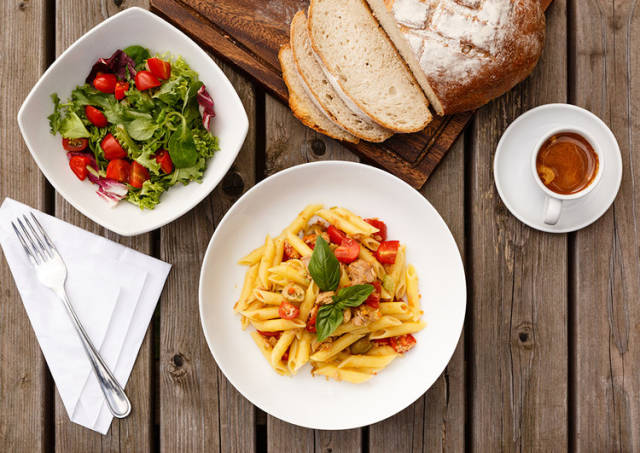 While employees in small towns and villages might go home to eat with their families, office workers in Italy's larger cities often go to a tavola calda, or snack bar, for their hour-long lunch break.

At home, workers might have a bowl of pasta with tuna, tomatoes, and olives and a green salad. At a snack bar, Italian workers can buy pizza al taglio. Large rectangular pizzas are cooked in sheet pans then sliced up and bought by weight so customers can buy as much or as little as they like to suit their appetite. 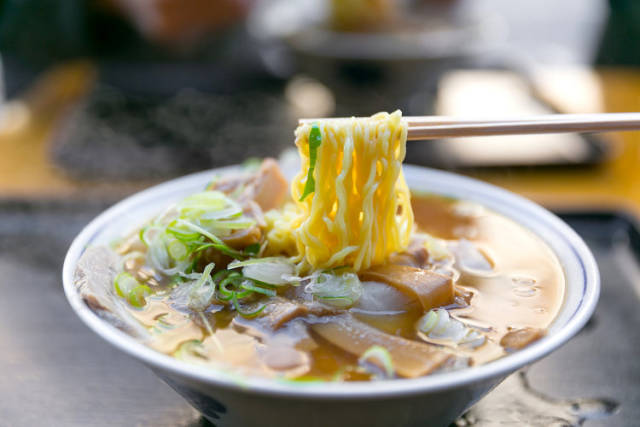 Japanese workers only have half an hour to grab lunch in the middle of the day, and so it's important that their meal is fast and filling. Bento boxes, made up of compartments filled with hot and cold components, and ramen are both popular lunch options and are widely available across Japan. 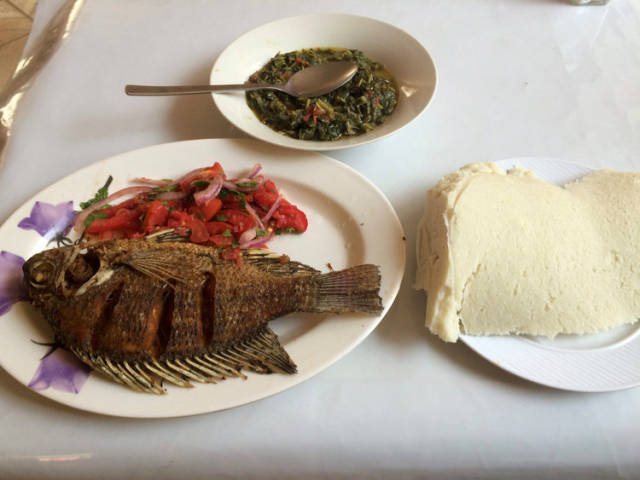 In Kenya, office workers might head to a restaurant for a sit-down meal with colleagues and friends. Many traditional Kenyan meals revolve around smoked or fried fish and ugali — a very stiff maize porridge which is sliced. This heavy and filling starch is often paired with robust vegetables like braised cabbage. 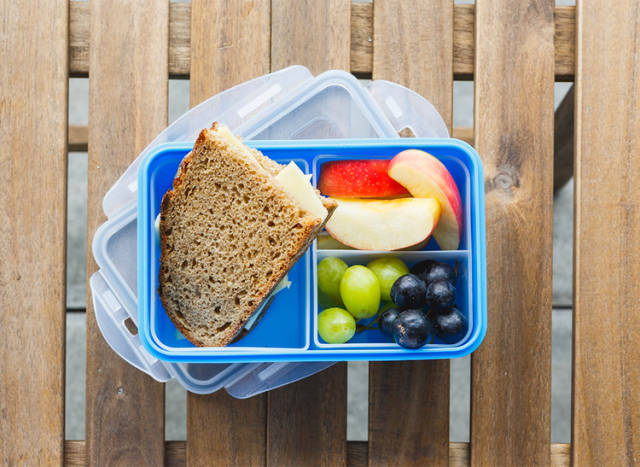 The Dutch are known for their love of cheese, with the average Dutch citizen reportedly consuming 17 kilograms of the stuff every year. As a result, it should come as no surprise that the people of Holland go to work armed with a cheese sandwich every day.

The simple lunchbox staple is best paired with fresh fruit such as a sliced apple or grapes, according to Viking's research. 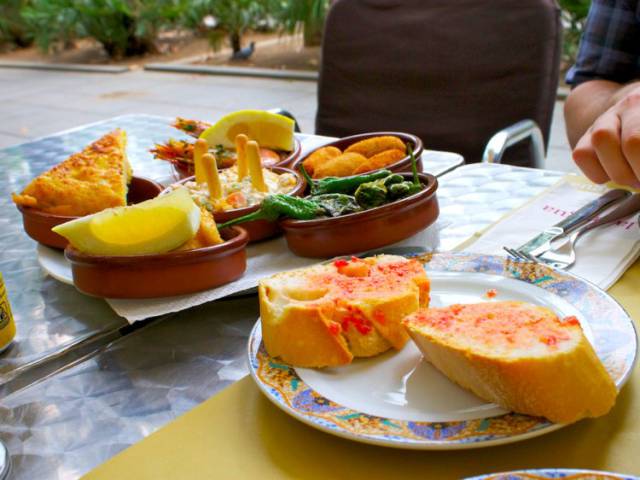 The Spanish take the idea of a "lunch break" to the next level. It's common for whole towns and cities to take a two to three hour break in the middle of the afternoon when the sun is at its hottest. During this period, most people go home for a family meal followed by a nap or "siesta."

As a result, lunch is often the largest meal of the day for many people in Spain. Multiple courses, including salads and gazpacho to start followed by small plates of a variety of meats and seafood, are enjoyed by the whole family as they retire to the shade.

SWEDEN: Fika breaks either side of lunch, consisting of hot drinks and pastries. 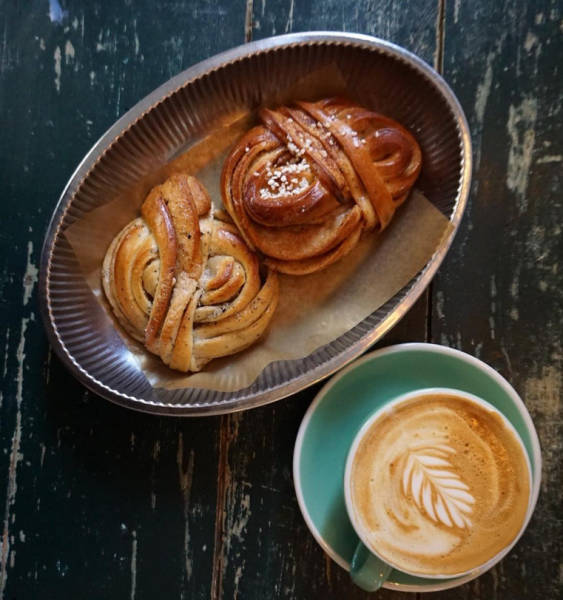 As well as their full lunch break, Swedish office workers are often encouraged to take fika breaks in the morning and mid-afternoon. A fika tends to last for around 20 minutes and is a great opportunity for workers to socialise amongst themselves with coffee, pastries, and biscuits. 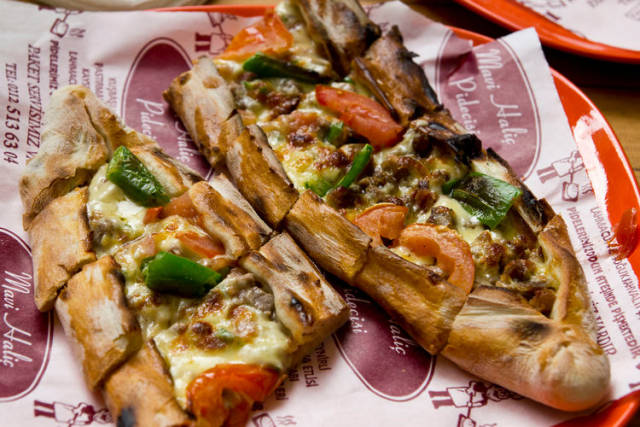 A flatbread base shaped into a long oval and topped with sauce, meats, and cheeses, a "pide" is similar in style and design to a classic Italian pizza. This Turkish delicacy is a common street food in the country and therefore makes for a quick and filling lunch for office workers. Common toppings include spinach and feta, or slow cooked lamb. 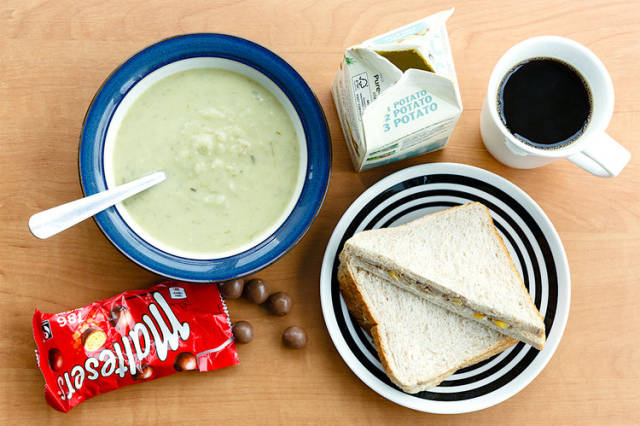 According to Viking's research into British eating habits, the most common office lunch in the UK is a no-frills tuna sandwich with microwaved leek and potato soup, followed by Maltesers and a coffee. 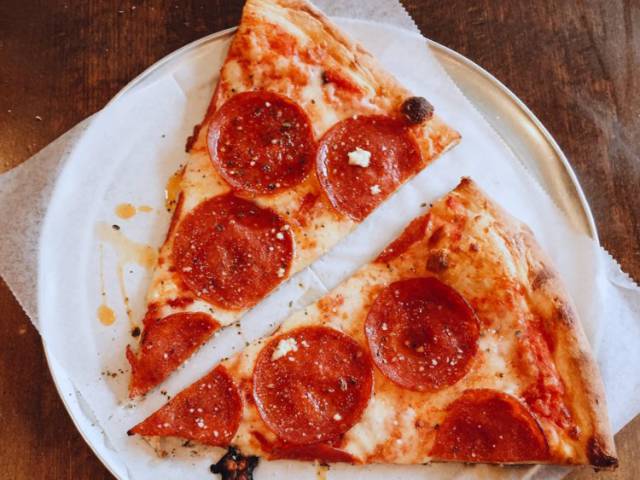 Lunch in the US features some more exciting — albeit more calorific options. Office workers enjoy pepperoni pizza at their desk with 62% of employees reportedly preferring to stay at the computer during lunchtime, according to Viking's findings. 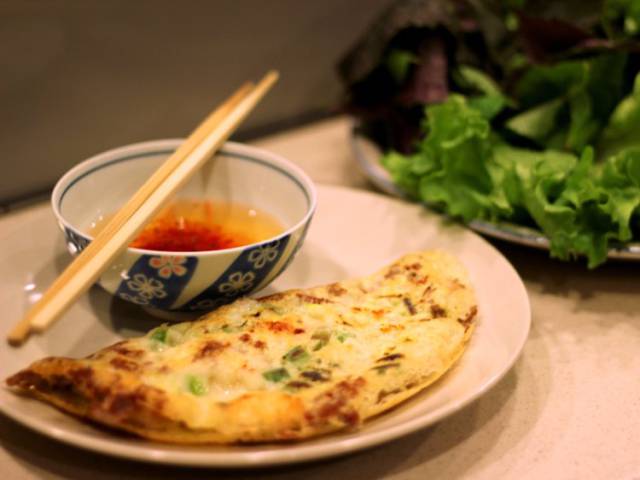 Vietnam's bustling street food scene makes the perfect location for a busy worker to grab lunch on the go. One common option is a bánh xèo — a crispy savoury pancake made of rice flour and laden with flash-fried pork, prawns, and vegetables.

Another option which has gained popularity all over the world is a bánh mì. This crusty roll, similar to a baguette, is stuffed with braised meat, crispy shredded carrot, cucumber, radish, and plenty of fresh chilli.

birdman 4 year s ago
#14 ... UK... What about "Plowmans lunch" (fresh bread, butter, Cheese, hard cider)
or "Shepherds pie" (lamb stew with potatoes covering the top. Keeps warm till after noon)
Oh and "Cornish pasty" like the shepherds pie but all encased in pastry.
I typically did one of these most lunchtimes when I started working when I lived there , all washed down with a pint or 2 of course
Reply