How does someone access the cockpit if the door is blocked from the inside? 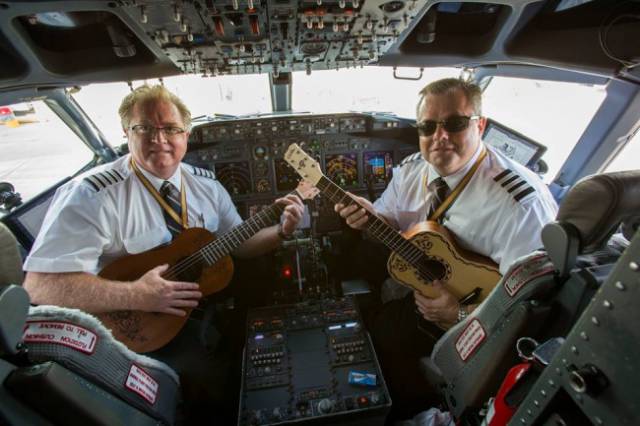 There is a special code that a flight attendant must enter to access the cockpit. This is necessary in certain cases — if both pilots lost consciousness, for example. The captain of the aircraft finds out the code before the flight and gives it to the crew. After the code is entered, the door will open within a minute unless the pilots do something. If a pilot sees on the CCTV that it’s not a flight attendant behind the door, the pilot will block the door completely, and there will be no way for the intruder to get inside.

Can pilots have thick mustaches or piercings? 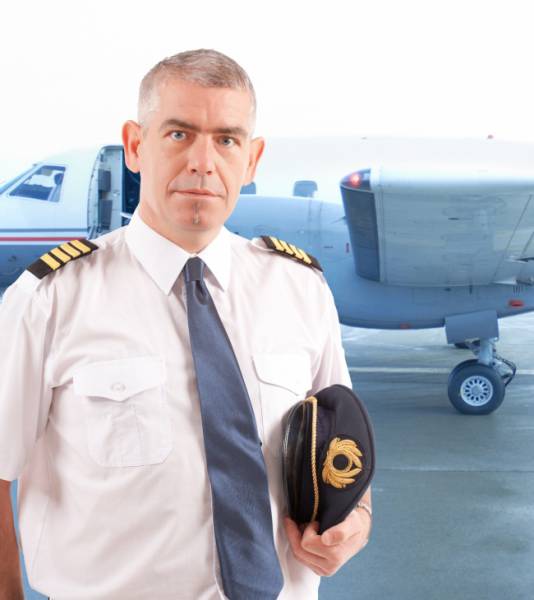 Bushy beards, mustaches, piercings, and all other sorts of decorations on the face don’t allow pilots to properly wear oxygen masks. The masks should be fixed very tightly on the head. That’s why pilots’ faces should always be clean, and only a little bristle is sometimes allowed. Otherwise, there may be a situation that endangers the lives of passengers.

What happens if all the engines stop working? 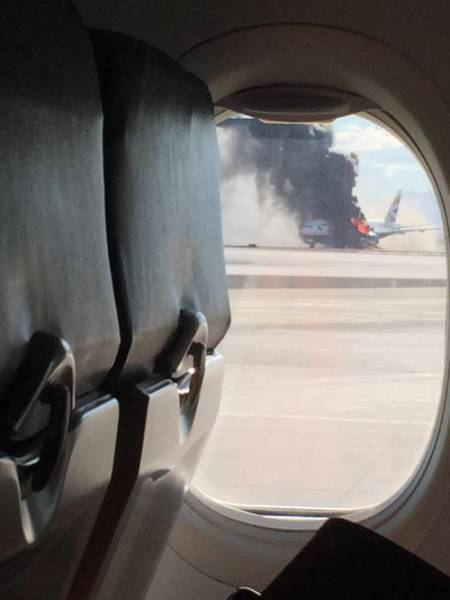 During every flight, planes switch to a mode where the engines work at zero leverage. If you are driving a car with a manual gearbox and switch the gear to neutral when going down a hill, it will be pretty much the same. It’s very rare that the engines completely fail to work. And even in such a situation, there is a way to launch the engines again.

But even without the engines, a plane can land. The most famous case was with a Boeing 747 over Java in 1982. The plane got into a dust cloud from a volcano that had erupted, and all 4 engines stopped working. The crew managed to land the plane at a nearby airport, and none of the 263 passengers were hurt.

For how long do the oxygen masks work? 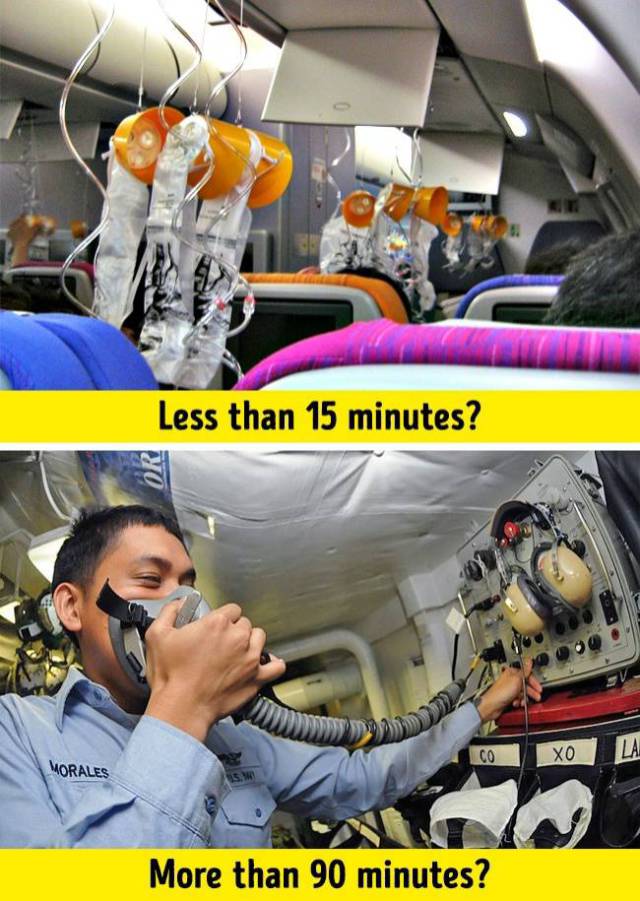 The oxygen level and the pressure inside the plane are supported artificially. If the cabin is depressurized at a great height, people start having hypoxia: they lose consciousness and can die without an oxygen mask.

Oxygen masks can work for 10-15 minutes. This is enough time for the pilot to bring the plane down to an altitude where you can breathe normally. Pilots have their own oxygen masks that work for a longer period of time. This is because they need to be able to land the plane without losing focus. Prior to every flight, pilots check that their masks operate properly.

Do pilots sleep in the cockpit? 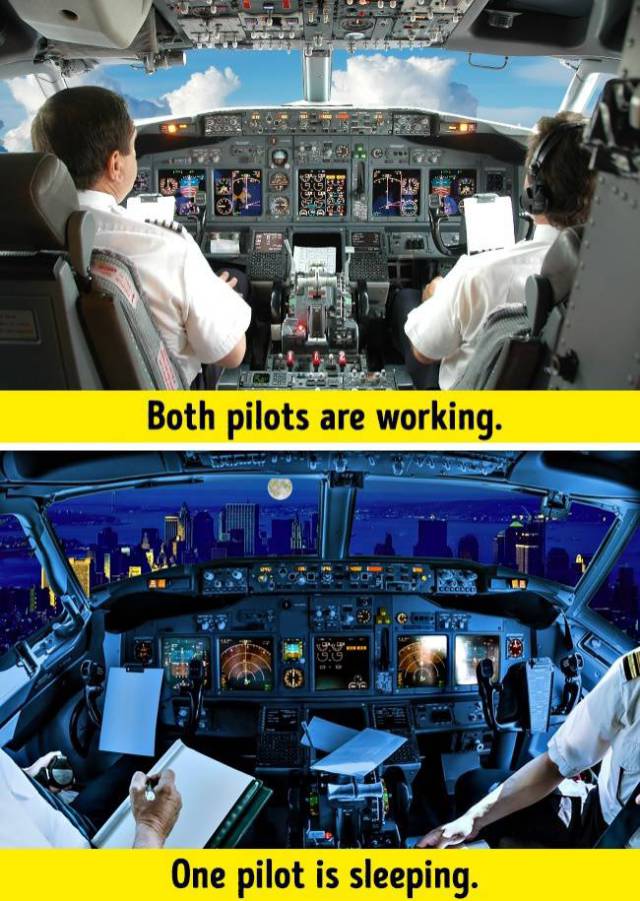 Approximately 56% of pilots have accidentally fallen asleep during a flight (or perhaps taken naps). Fortunately, modern planes work in an automatic mode for almost the entire flight, and traffic controllers require the pilots to be in contact all the time.

On longer flights, there can be 2 crews or 3 pilots that substitute each other so that everyone can have some rest. Pilots sleep and rest in a special room. It’s important that the crew is in touch with traffic controllers all the time and that at least one pilot controls the flight.

Why do planes sometimes make circles before landing? 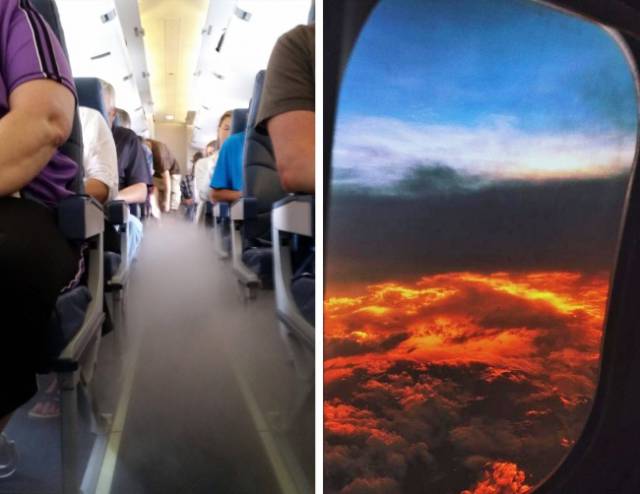 This is a totally normal situation. The plane can make a second circle for various reasons. For example, there might be an object or an animal on the runway, there might be a very strong side wind, or the airport might be temporarily closed for the urgent landing of a different plane.

Passengers get very worried because, before the long-awaited landing, the plane suddenly starts gaining altitude. But actually, everything is under control, and this is a standard way of making another circle.

If a baby is born onboard, which country’s citizenship will he or she receive? 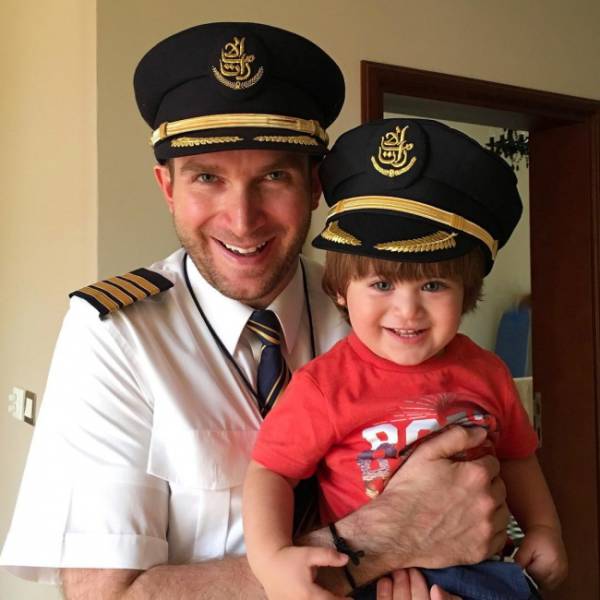 There are a few options. The child could be a citizen of:

The country in which the airline is registered;

The country over which the child was born;

The country in which the plane landed.

In most cases, the first option is the most popular, but the decision is made by the airline, taking the law into account. Some airlines gift babies a bonus: the chance to fly for free to any part of the world during their entire life.

Can a plane land in automatic mode? 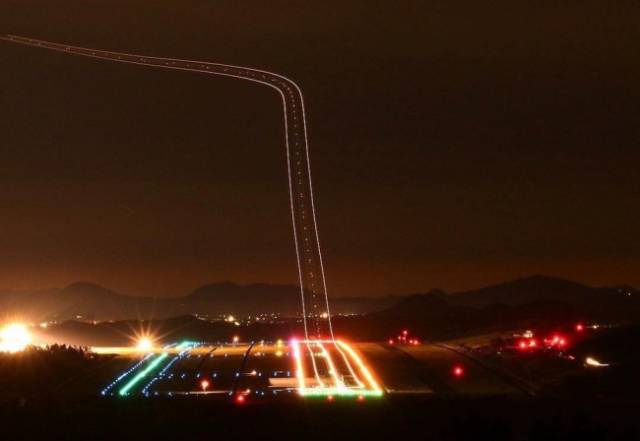 In modern planes, there are control systems that guide the plane from an altitude of 1,000 feet almost to landing on the runway. During landing, it’s possible to choose the automatic mode for the landing itself, but the mode has to be activated by the pilot. The mode should be controlled all the way and adjusted if needed.

Before landing, the plane is guided by an instrument landing system, and the radio tower of the airport guides the plane and changes its route as necessary. The system works even if the plane is completely out of power.

A rough landing on the water or on the ground — which is safer? 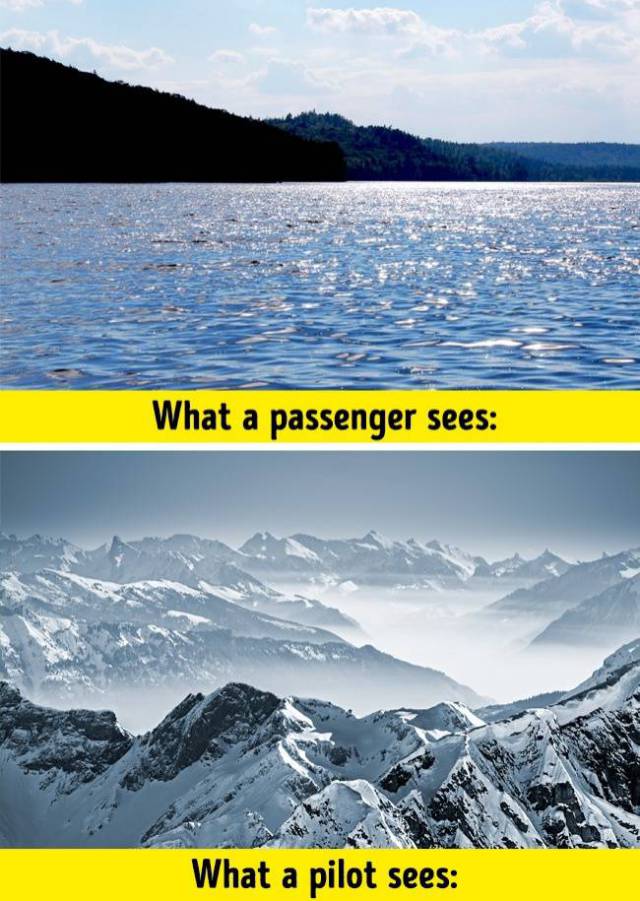 This depends on the model of the plane. In most cases, it’s easier to land on the ground. Water will flood a plane very quickly, and it’s also “rougher” than the ground because of its density and consistency. According to statistics, the chances of survival are higher when landing on the ground rather than the water.

What do pilots eat during a flight? 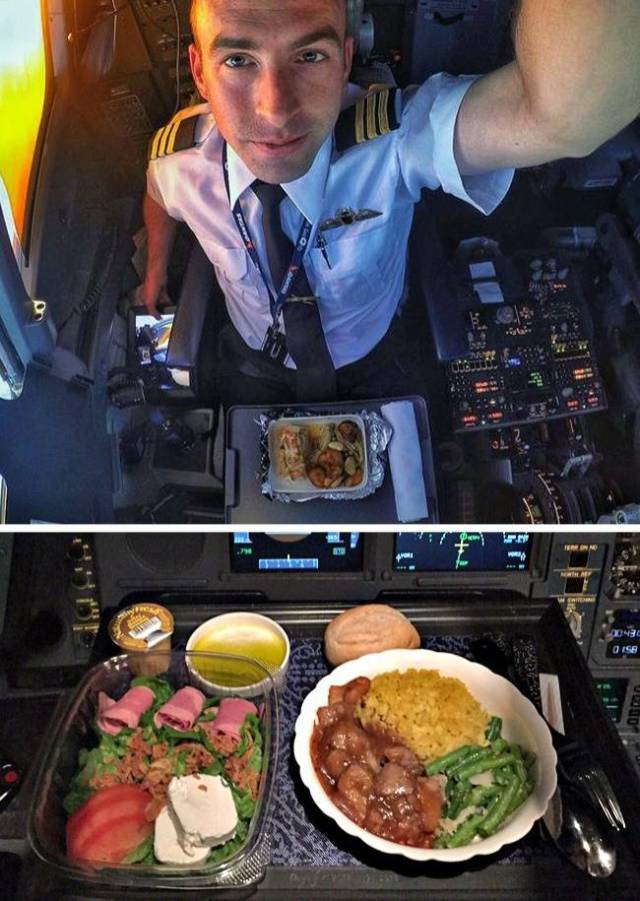 There is a separate menu for pilots with a few dishes they can choose from. If the captain prefers chicken, then the copilot will get fish or a different meat. This is the best way to avoid food poisoning from the same ingredients. The pilots eat in turns, and some do it right at the controls using special desks.

But there are some airlines that don’t follow this rule, and so the pilots may get the same food as the passengers.

Why do pilots sometimes fly together with the passengers? 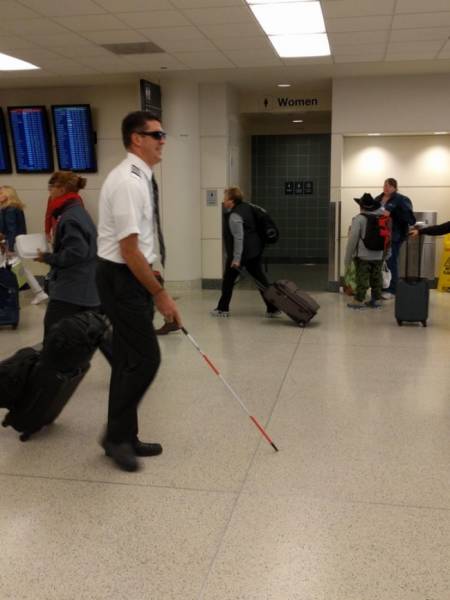 Sometimes pilots have to fly from one airport to another together with the passengers. Onboard, if they are wearing a uniform, they can’t sleep, eat, or watch movies wearing headphones in front of the passengers. A pilot doing this may confuse the passengers or even cause panic. Most of the time, pilots fly in extra seats in the cabin or in the first class seats.

Which is worse: hitting a bird, being in a hailstorm, or getting struck by lightning? 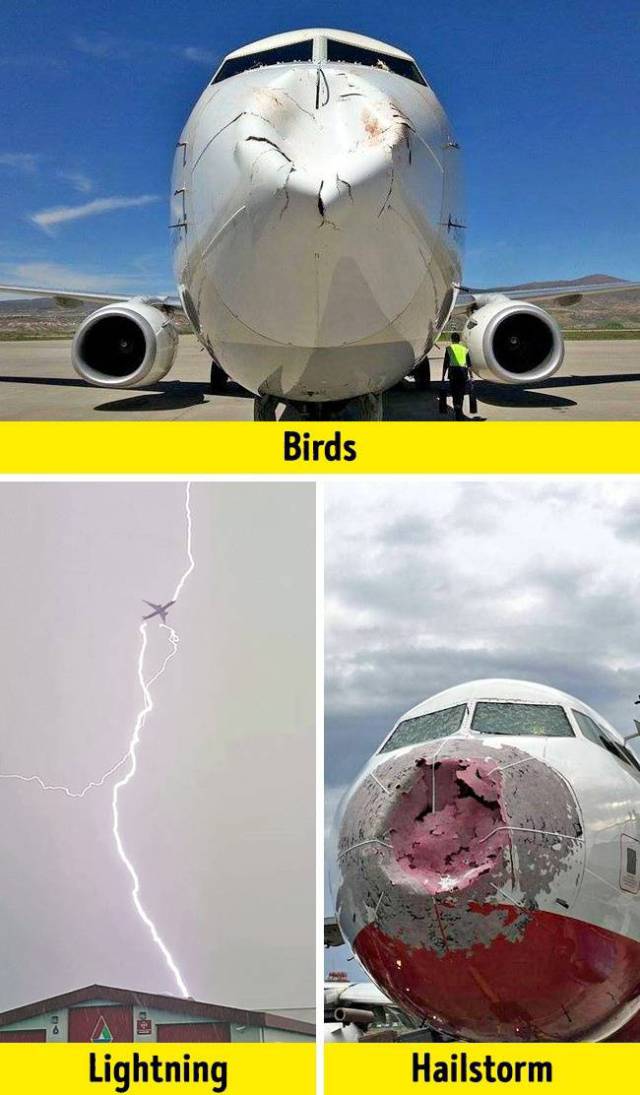 Bolts of lightning often strike planes, but passengers don’t even notice it. In very rare cases, this can lead to a blackout on the plane. But pilots have instructions that reboot all the electronics on the plane, and the flight continues as usual.

Birds present a bigger danger than you may think. If birds get into a turbine, they can destroy it or even cause a fire. Not every windshield is strong enough to survive a collision with a bird. This is why there are special noise generators and even helicopters to scare away birds.

A hailstorm is just as dangerous, but bad weather is much easier to spot and avoid.

Why are there spirals in the turbines? 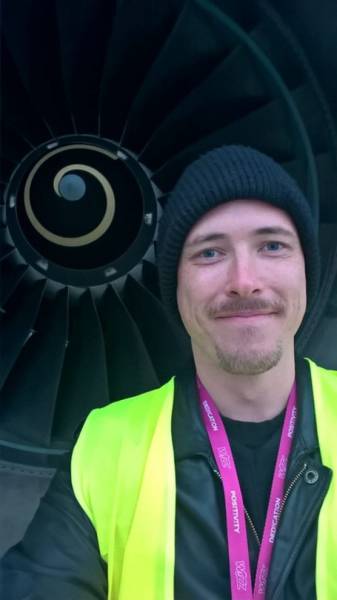 Turbines can work almost without making any noise at all. If you get close to one when it’s working, you’ll be pushed a few meters away, and you can get seriously injured. After a series of accidents, turbines now have spirals or special signs right in the center so that people can see if the engine is on or off.

Can an ordinary person land a plane? 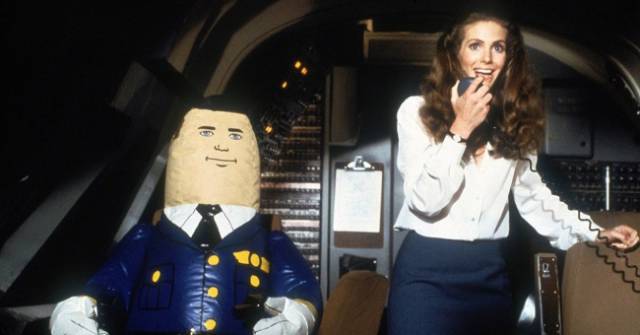 If we are talking about a modern plane, there are good chances of success here. A recent experiment in a flying simulator showed that a flight attendant succeeded. For the most part, this is thanks to computer systems that will guide and land the plane as the person in the cockpit receives instructions over the radio about what to do.

Why don’t they give parachutes to the passengers? 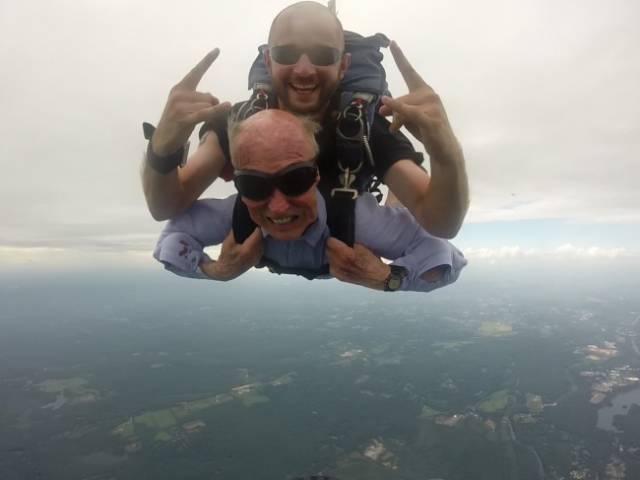 This sounds strange, but a parachute will most likely not save your life if the plane starts to fall. Even in a calm situation, most people can’t put one on correctly and land safely. And in order to jump out of a plane and not get hurt, an aircraft should fly slowly and not higher than 16,000 feet.

But there are some passengers that take parachutes as carry-on luggage. You can follow suit, but you should know that a parachute costs as much as a good car.

Are pilots scared of flying? 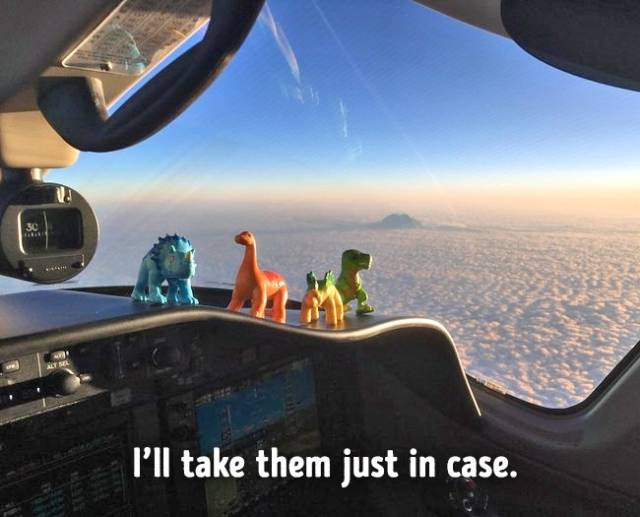 The biggest plane crash in history didn’t happen in the sky; it happened on the ground. In 1977, 2 airplanes collided on the runway, and 583 people died. According to statistics, most incidents happen during the first 3 minutes after takeoff and 8 minutes before landing. But still, 95.7% of people who have been in a plane crash survived.

If you want to have better chances of survival, sit in the back of the plane: the safest seats are there. Choose seats within 5 rows of emergency exits.

Are we supposed to applaud pilots? 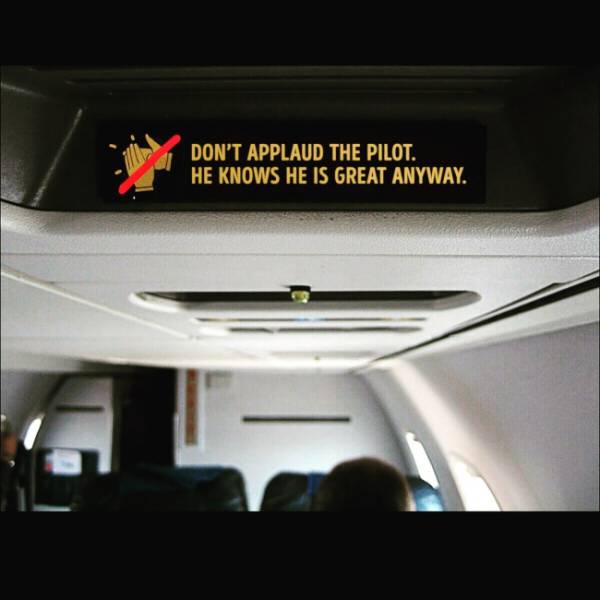 In fact, pilots like it when the flight attendants tell them that their landing was appreciated and that the passengers applauded. Some pilots even stand at the exit saying goodbye to the passengers, and you can thank them in person. You can even present them with a chocolate bar. They will like it!