The Internet Is Full Of Fake Stories And News, Don’t Believe Them (11 pics)


Happy Keanu Reeves is running away from the paparazzi.
1 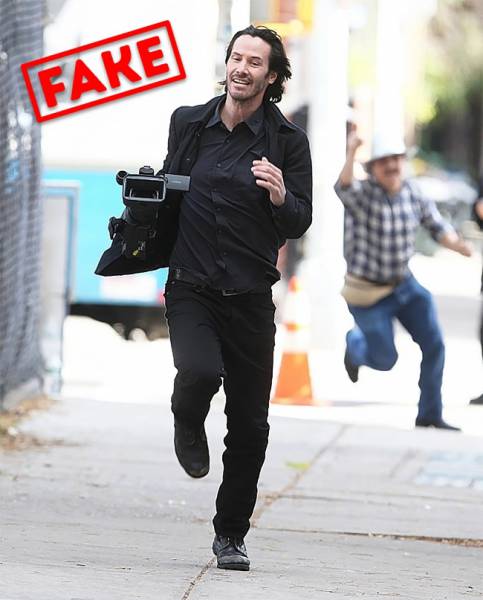 This photo has appeared in almost every existing entertainment portal but turned out to be footage from the dramatic film, Generation Um.... In the movie, there is a scene where the hero, Keanu Reeves steals a camera from some cowboys. On the Internet, the photo became famous thanks to the actor’s happy demeanor, which is unlike him, along with captions that read, “Keanu Reeves stole a camera from the paparazzi.” 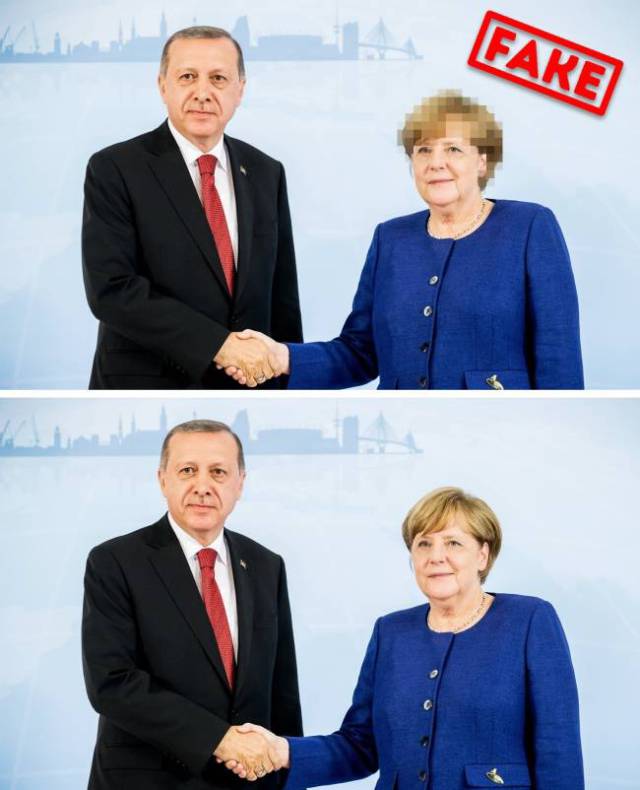 Some media publications released pictures that allegedly passed through censorship on Saudi TV channels. The pictures show the Chancellor of Germany, Angela Merkel with pixelated hair. The photos caused a huge buzz, but in reality, they turned out to be completely fake. In fact, no one had edited the pictures since the state authorities became loyal to European women long time ago and don’t require them to cover their hair when they visit. This is not the first time a female politician refused to cover her head with a kerchief during their visit to Saudi Arabia.

This famous actress was believed to be Bill Gate’s daughter.
3 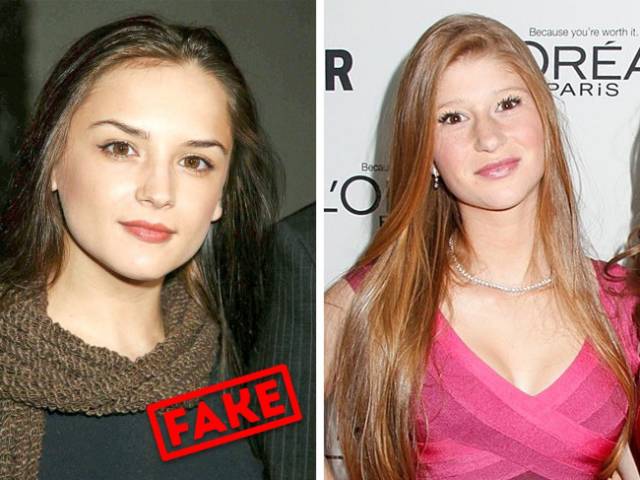 Some time ago, a photo of computer genius, Bill Gates’ daughter became popular on the Internet. The picture garnered thousands of likes in social media and popular image boards. However, the photo wasn’t of Gates’ 21-year-old daughter Jennifer but in fact the 38-year-old actress, Rachel Lee Cook.

It’s eye opening to to realize that searches in the many different search engines can produce such incorrect photographs, mixing up Gates’ real daughter with an American actress.

A Chinese family with unattractive kids.
4 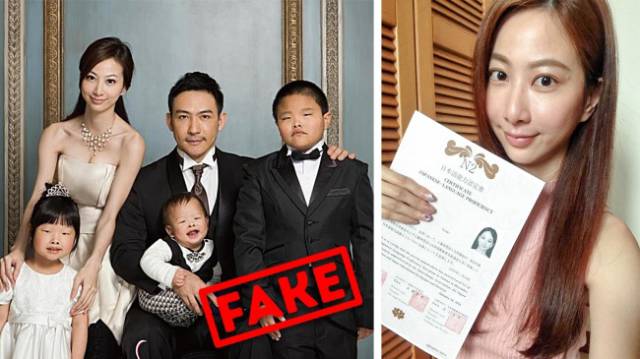 Many of us have heard the story about the unhappy Chinese man who sued his wife for bearing ugly children. The reason for the litigation was that plastic surgery that the wife had allegedly undergone prior to their marriage had misled the man to believe their kids would look different than they did. This story has become urban legend, but the story along with this photo are completely fake from beginning to end. In fact, the photo is actually an advertisement for a plastic surgery clinic.

Unfortunately, the successful model pictured in the photo, Heidi Yeh, suffered much misfortune from the whole event. In interviews, the model explained that after the release of this ill-fated advertisement, she was severely criticized by the public.

The president of Turkey, Recep Erdoğan, presented a photo of himself to Elon Musk.
5 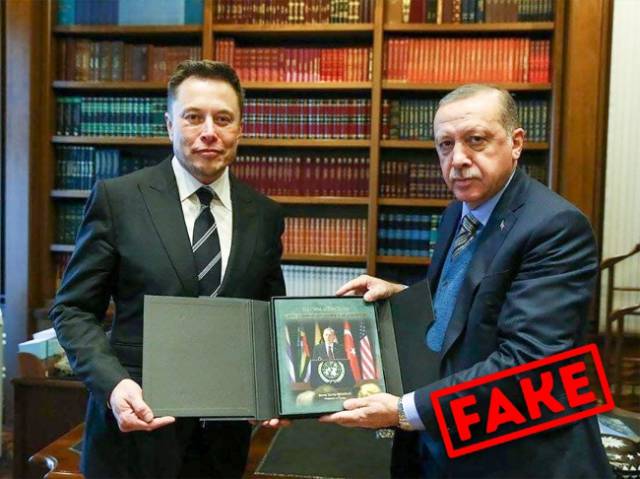 This story’s headlines adorned articles in well-known news publications, entertainment portals, and social networks. In response, many people complained that the Turkish president didn’t have any sense of modesty at all if he actually had the nerve to give the head of SpaceX and Tesla a photo of himself. But these speculations are only partly true. In fact, the gift given to the entrepreneur was actually the book, The Vision of New Turkey — The World is Bigger Than Five, authored by Recep Erdoğan himself. That being said, the author does have the right to choose who and what will be shown on the cover of his own publication.

A fake British restaurant that became the highest rated in London on TripAdvisor.
6

A British journalist created the perfect scam after turning the barn in his backyard into the most talked about restaurant in London. Taking the journalist just half a year to execute, “The transformation” included writing fake reviews to his fictional restaurant on the popular site, TripAdvisor, and creating fake dishes using everything from sponges to detergents. Thanks to the artificial hype, people from different countries were dying to go to this restaurant — and some even managed to do so. The journalist and his friends opened the “restaurant” for one day, after which they were exposed.

The beloved mistress of Kim Jong-un was publicly executed in 2013.
7 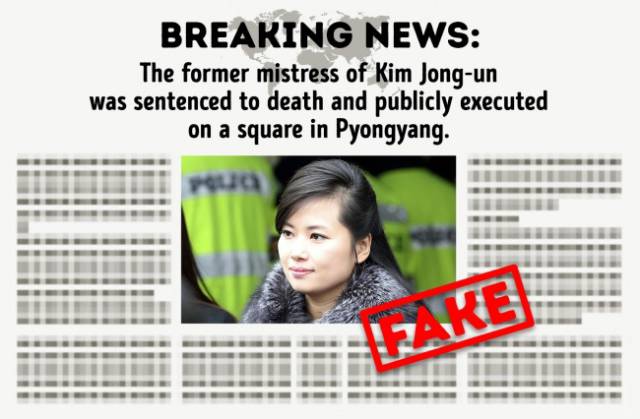 In 2013, the whole world heard the shocking news: the North Korean leader’s mistress was shot dead as per his order. World media claimed that the singer, Hyon Song Wol was sentenced to death after filming videos in the 18+ category. The musical orchestra, dancers, and performers of the Korean musical group were condemned along with her. It was reported that all these people were publicly shot in Pyongyang Square. However, on January 21, 2018, the allegedly shot lover of Kim Jong-un was seen heading to the DPRK delegation to South Korea for the Olympics. This news is the perfect example of how so many media outlets greatly exaggerate the despotism of the young ruler.

A burnt hill of the Windows XP default wallpaper.
8 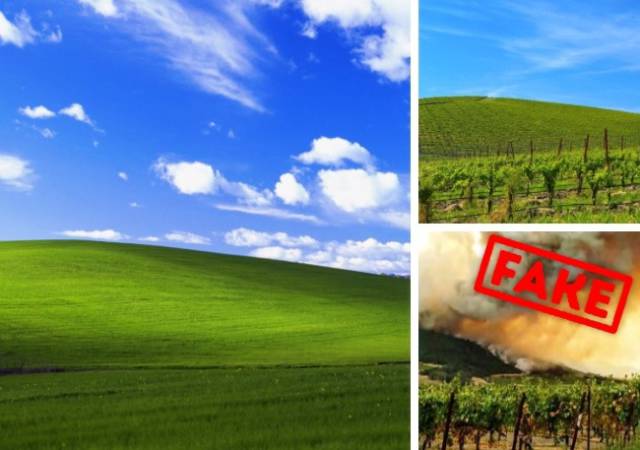 On October 25, 2017, Twitter users began to publish a selection of photos of the famous hill from the Windows XP OS computer’s default wallpaper. Captions to the photos read, “The world-famous hill suffered during the fire in California.” However, the original “Bliss” wallpaper is actually of Sonoma County in California where fortunately, forest fires never got to. This fact was confirmed true by the landowners.

The squirrel caught sitting inside a sawed tree.
9 We have to admit, this picture makes us feel kind of emotional! But if you look a little closer, it’s clear that the squirrel was placed in the hollow trunk unwillingly. First of all, a squirrel builds their nest 4-6 meters above ground. Also, there’s no loose sawdust on the surrounding green grass or on the animal itself. Finally, the photo isn’t of a hollowed out trunk at all, but rather a rotten tree trunk.

The Simpsons animated sitcom predicted the presidency of Donald Trump.
10 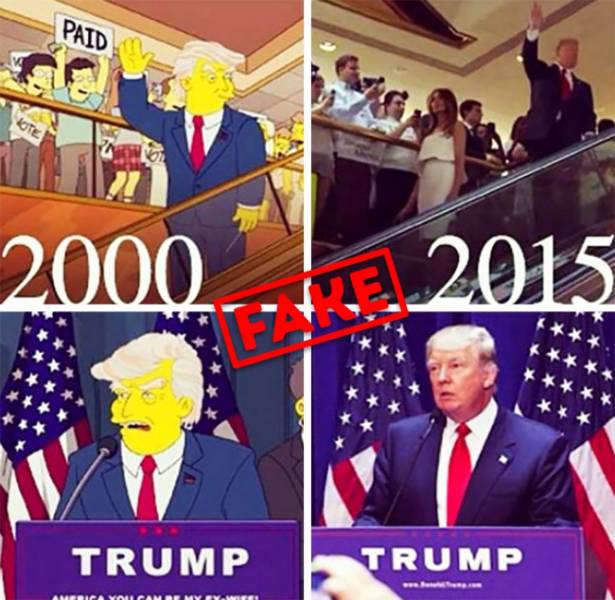 After Donald Trump’s victory in the US presidential election, Twitter users went wild spreading the rumor that back in 2000 the creators of The Simpsons predicted his triumph in the episode, Bart to the Future. Footage from the 17-year-old TV series coincided perfectly with the behavior of the US leader in 2017, which led to the creation of a bunch of memes themed, “The Simpsons Already Did It”. According to the prophetic episode, Bart Simpson goes to 2030 where he learns that his sister is the vice-president to President Trump. Trump himself was not actually shown, and the footage was drawn by the fans of the series in Photoshop.

Keanu Reeves paid for the excess luggage of strangers.
11 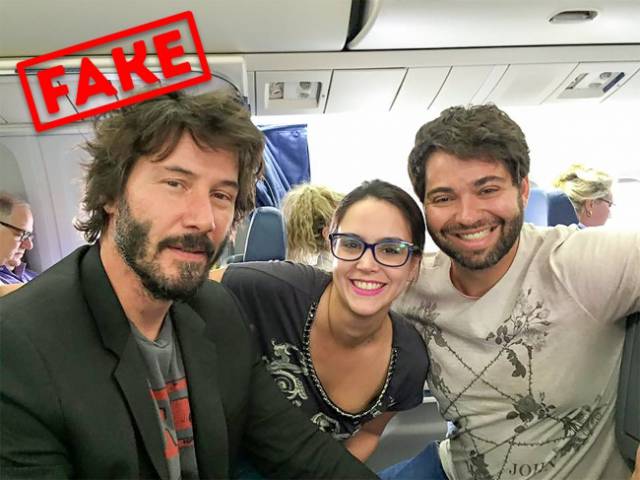 On the 6th of January, users of the entertainment portal, Reddit published a photo of the actor, Keanu Reeves next to two young people aboard a commercial aircraft. The caption read, “Keanu Reeves paid for the baggage of a young couple who didn’t have enough money.” The story was picked up by the media and the photo itself got spread across social networks within the blink of an eye. However, the couple in the photo spoke out and disproved the rumors that accompanied the photo. The 2-year-old picture was actually of a brother and sister who asked the actor to take a picture with them. The author also claimed that Reeves did not pay for their baggage.