In 2005’s The Chronicles of Narnia: The Lion, the Witch and the Wardrobe, The White Witch’s ice crown melts as her power slowly ebbs away. 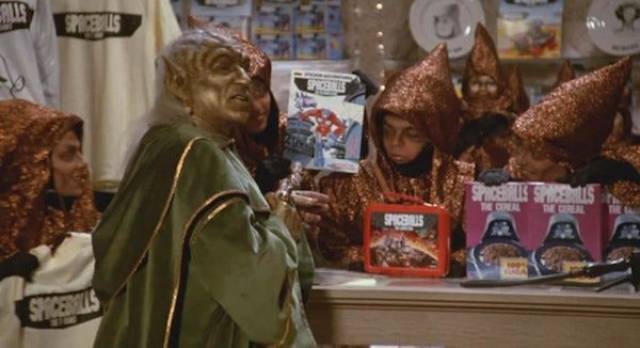 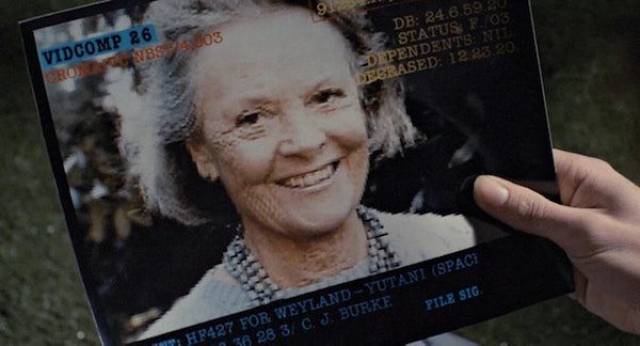 When Ellen Ripley awakes after decades of hypersleep in 1986’s Aliens, she is presented with an image of an old woman who she is told is her daughter. The image used is actually that of actress Sigourney Weaver’s mother.

Cloudy With A Chance of Meatballs (2009) features a scene where all the presidents on Mount Rushmore are hit with giant pies. Every president is hit in the face other than Lincoln, who, much like his real-life assassination, takes one to the back of the head. 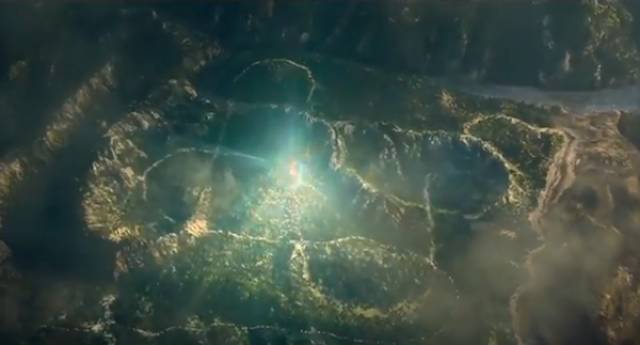 When the camera pans back at the end of Jumanji: Welcome to the Jungle (2017), it can be seen that the whole jungle actually resembles the board from the original film’s game. 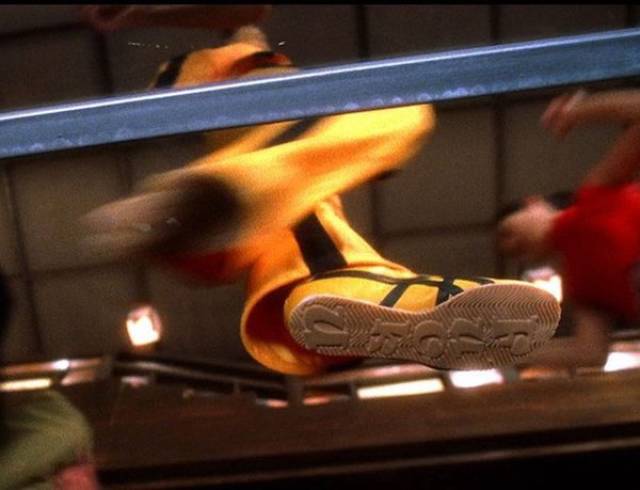 In a ‘blink and you’ll miss it’ easter egg, the bottom of the Bride from the Kill Bill’s shoe can be seen to have ‘FUCK U’ inscribed on it. 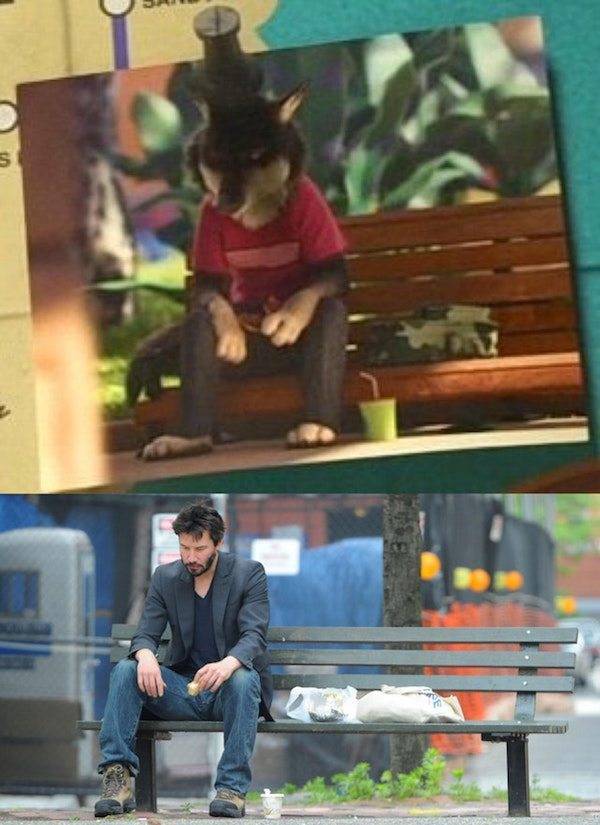 In Zootopia (2016), the ‘Sad Keanu’ meme can be seen on a conspiracy wall, but with a wolf imitating the forlorn film star.

In Watchmen (2009), the flag draped over The Comedian’s coffin at his funeral has 51 stars on it. This is due to, in the alternative 1985 Watchmen timeline, Vietnam becoming a US state after the winning intervention of Dr. Manhattan. 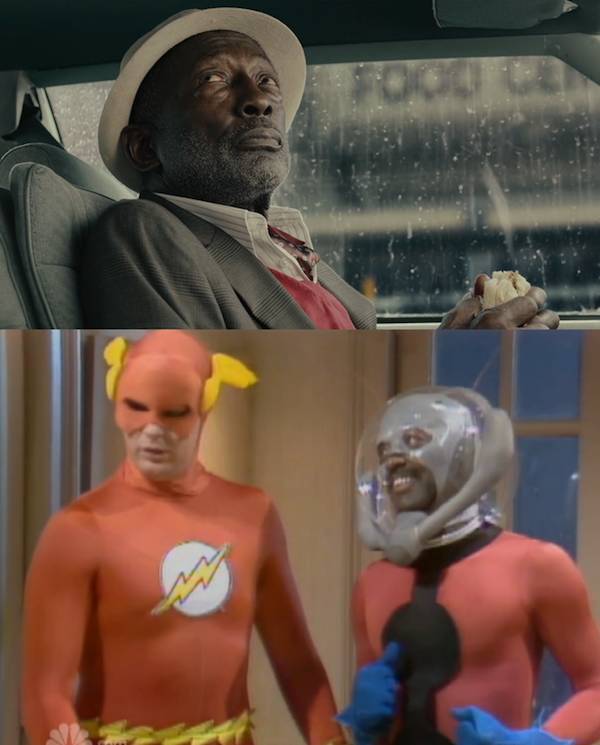 In Ant-Man (2015), actor Garrett Morris makes a brief cameo as a surprised taxi driver. This is a reference to Morris’ role as Ant-Man in a 1979 Saturday Night Live skit, the first time Ant-Man was every portrayed on screen.

The street on which Fight Club’s (1999) Tyler Durden lives is called ‘Paper Street’. A ‘paper street’ is a term used to define places that exist on maps but not in actual reality. 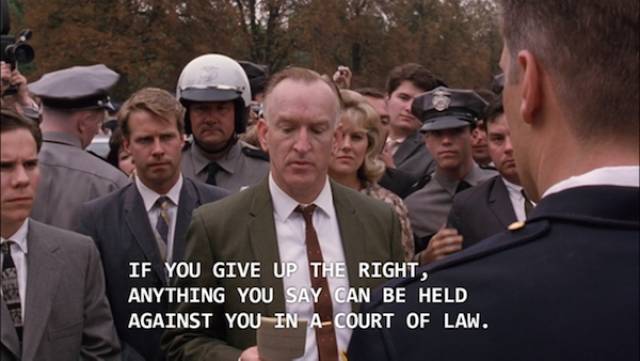 In The Shawshank Redemption (1994), the DA who arrests the sadistic Captain Hadley can be seen reading the Miranda rights off of a card. The scene is set in 1966, the same year that Miranda v. Arizona court case made the act mandatory when arresting a suspect. 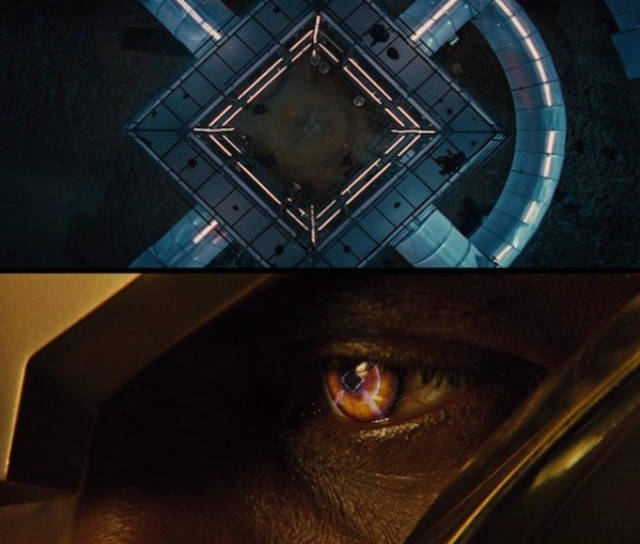 In 2011’s Thor, Heimdall’s eye is seen reflecting a shot from the previous scene, displaying that he was indeed keeping track of Thor the entire time. 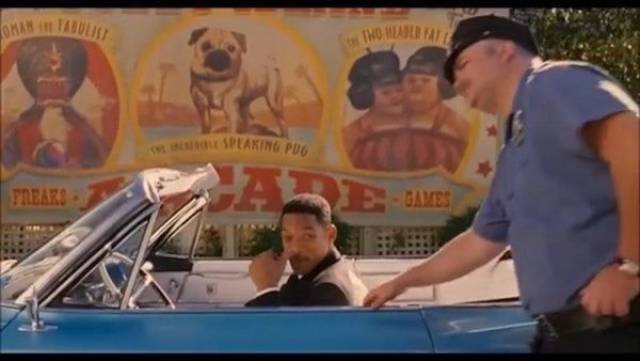 After Agent J travels back to 1969 in Men in Black 3 (2012), he gets pulled over in front of a billboard advertising a circus. One of the acts is the talking pug Frank, who features in the first two films of the series. 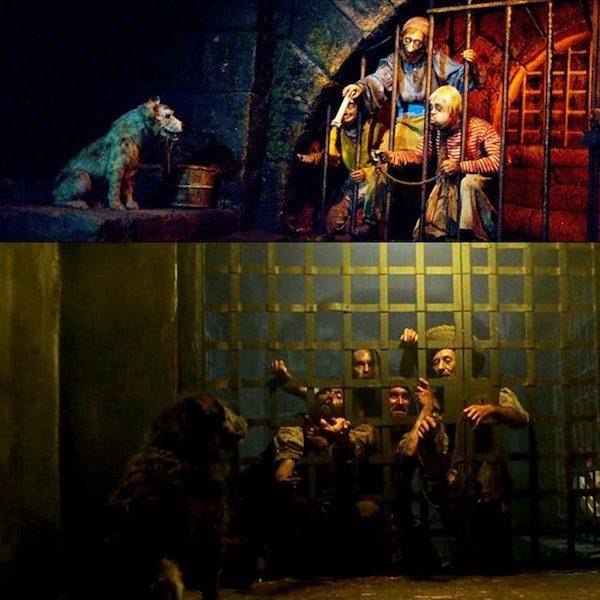 In Pirates of the Caribbean: The Curse of the Black Pearl (2003), Jack Sparrow tells his fellow cellmates that the dog holding the keys ‘is never going to move’. This is a reference to the animatronic dog in the original Pirates of the Carribean theme park ride, who has never worked since the ride’s opening in 1967. 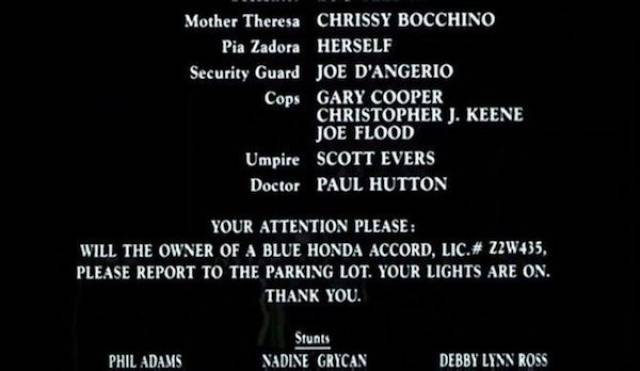 The credits for 1994’s Naked Gun 33⅓: The Final Insult feature an ‘announcement’ informing a car owner that their lights are on. 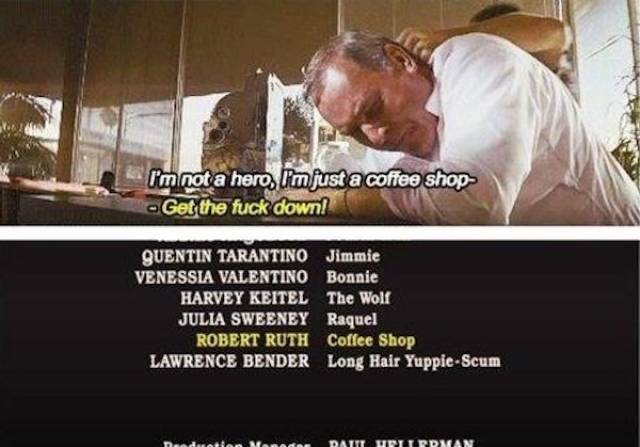 Well, this Pulp Fiction (1994) character did say so himself… 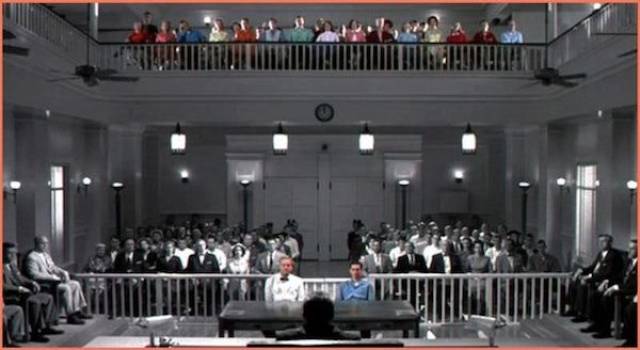 In Pleasantville (1998), the court scene intentionally mirrors a similar one in To Kill a Mockingbird (1962), with the ‘colored’ people in the balcony and the ‘black and white’ ones below. 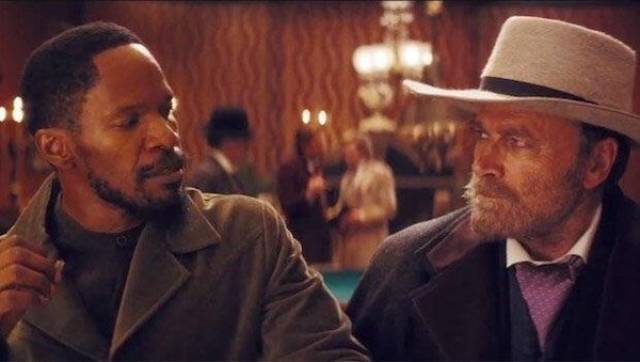 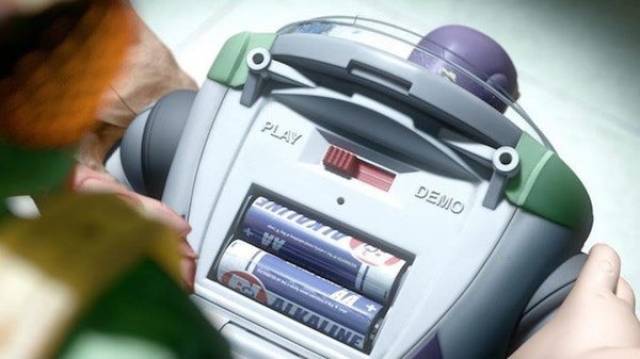 In 2010’s Toy Story 3 the batteries used to ‘power’ Buzz Lightyear are Buy n Large brand, the corporation who responsible for the events of Wall-E (2008). 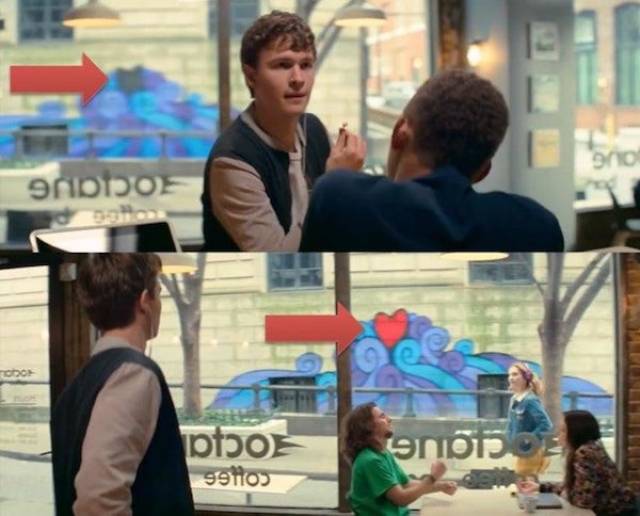 In 2017’s Baby Driver, the heart mural on the wall behind Baby changes from black to red after he meets Deborah and falls in love. 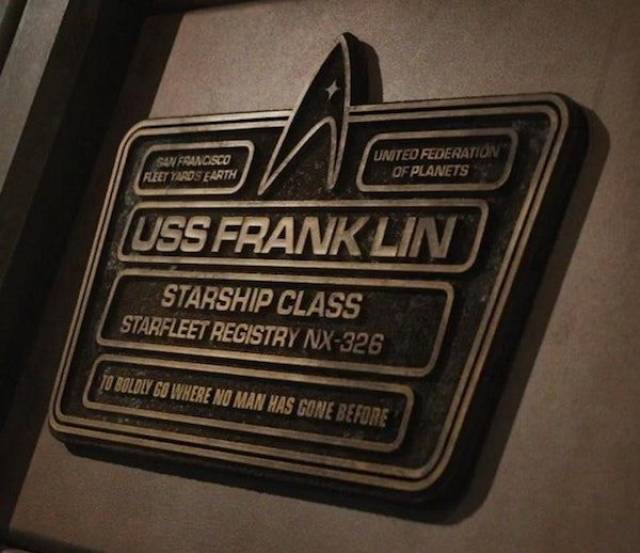 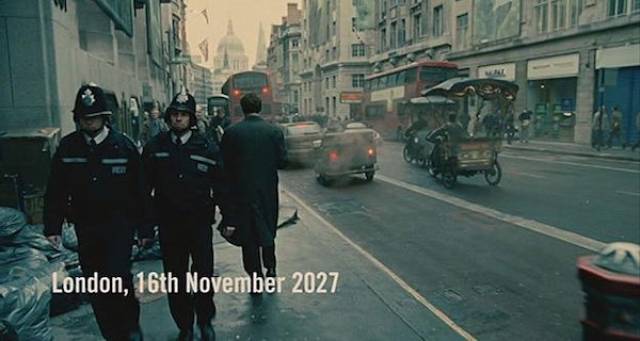 Despite being released in 2006, Children of Men features a shot of The Shard, a building that wouldn’t be completed until 2012.