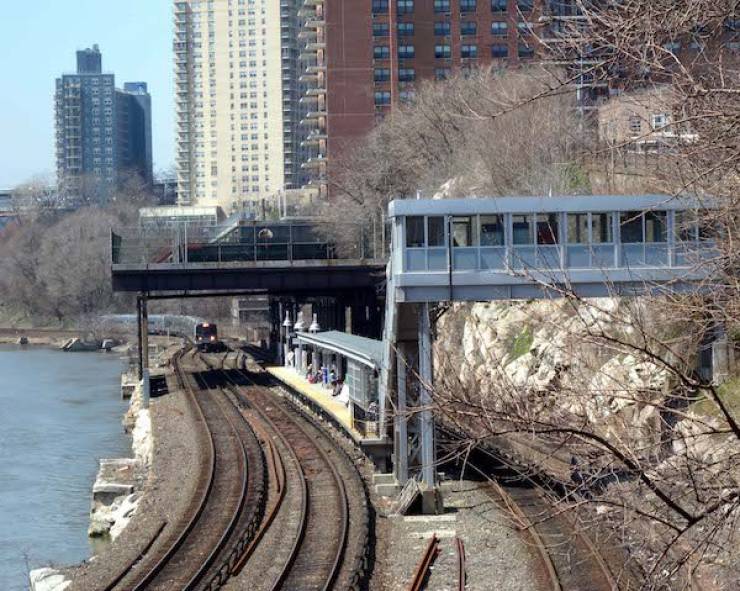 In most cases, a despited territory is an island, and Manhattan is no exception. There’s a small part of Manhattan that’s physically part of the Bronx, but both of the boroughs have been playing tug of war for the past century over it.

It started in 1895, when this northernmost neighbourhood was separated from the island of Manhattan by the construction of the Harlem Ship Canal, turning it into an island itself. Then in 1914, the Harlem River was filled in on the north side of Marble Hill, connecting it to the mainland and the Bronx. While it’s physically connected to the rest North America, Manhattan still tries to call dibs on it from time to time, and the Bronx tries to smack them down. This leads to some interesting jurisdictional dick-size comparisons hand waving. 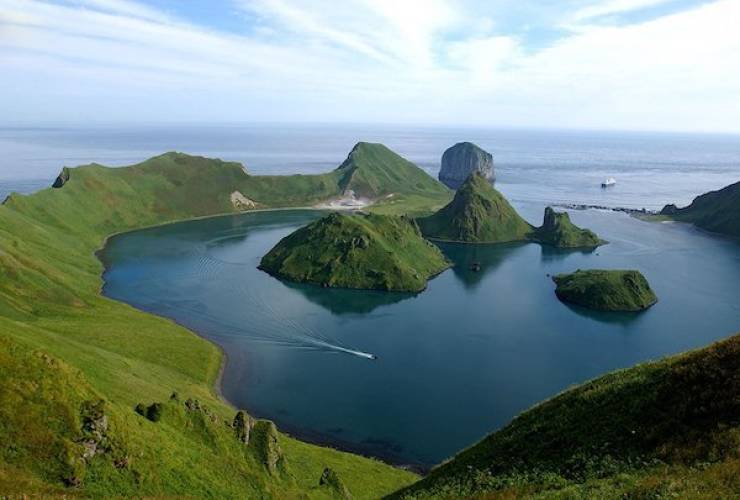 This is probably the only place in the world where the outcome of WWII hasn’t quite been resolved. In fact, this island is the reason that Russia and Japan still haven’t signed a peace treaty to formally end WWII for them – 74 years later. This island chain is equidistant between the two countries and rich in natural resources, including oil and gas, so it’s valuable to both sides.

The Northern Territories, as they’re known in Japan, and the South Kurils to the Russians, have been the centre of a dispute that probably will never be resolved. There’s been plenty of attempts, and valid solutions, but neither side will compromise, leading to a stalemate and no end to WWII for these two countries. 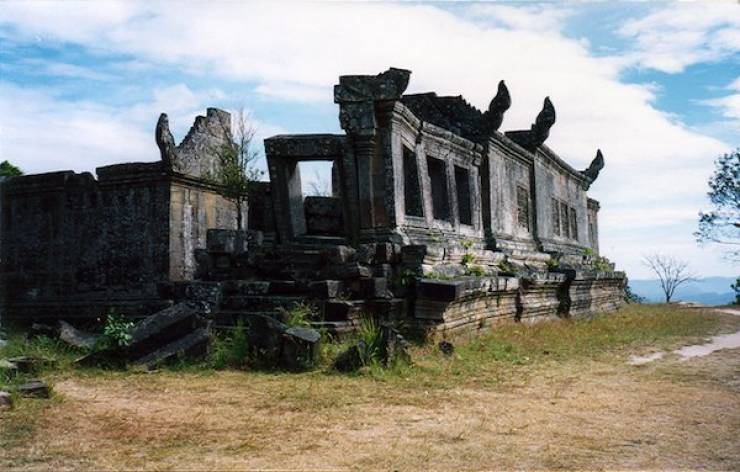 Sitting on top of a crazy steep cliff in the Dangrek Mountains, this 9th century Hindu Temple is a prime example of Cambodian temple architecture, but it’s technically in Thailand. Or is it?

The Dangrek Mountains are on the border of Cambodia and Thailand, and the ownership of the site became an issue when this temple was rediscovered in the early part of the 20th century. Both sides wanted the temple and the rich trove of artifacts. They took the dispute all the way to the Hague, and the international court ruled that the temple belonged to Cambodia. This battle has been going on in some form or another since 1904, and Thailand isn’t completely happy with the ruling.

Even today, there’s the occasional artillery strike in the vicinity and secret invasion to try to claim artifacts for Thailand. 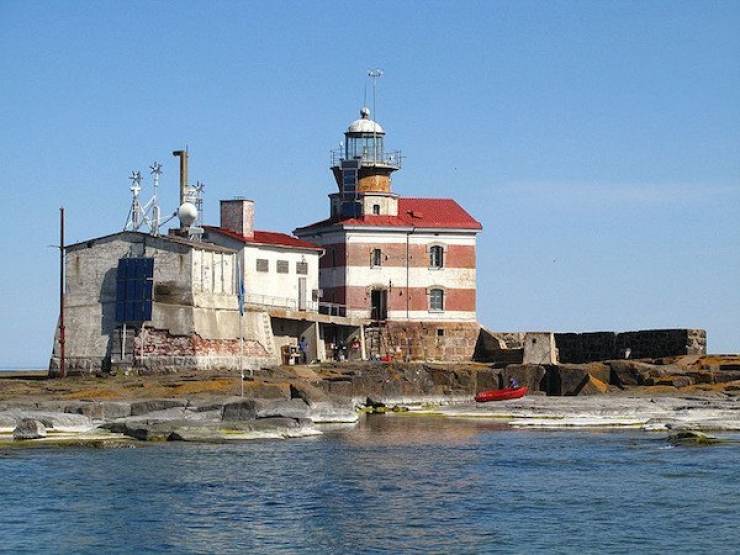 There’s a dispute over who owns a lighthouse on this tiny little island between Finland and Sweden. In the late 19th century, the Finnish territories were under Russian rule, and Market Island was divided between Finland and Sweden. As there were plenty of other, rocky islands surrounding this location, with choppy and dangerous water, it was decided that a lighthouse was needed to prevent further shipwrecks. Russian Tsar Alexander III ordered a Finnish architect to build a lighthouse on the island at the highest point – which happened to be on the Swedish side.

Even though it was in another country’s territory, the Finns fought for the lighthouse and there were plenty of skirmishes between the countries, starting in 1885. By 1985, the border was finally adjusted to a strange ‘S’ shape that granted the lighthouse to Finland, and gave Sweden the equivalent amount of territory in return.

It’s a lot of shit to shovel over an empty and barren island with an automated lighthouse. 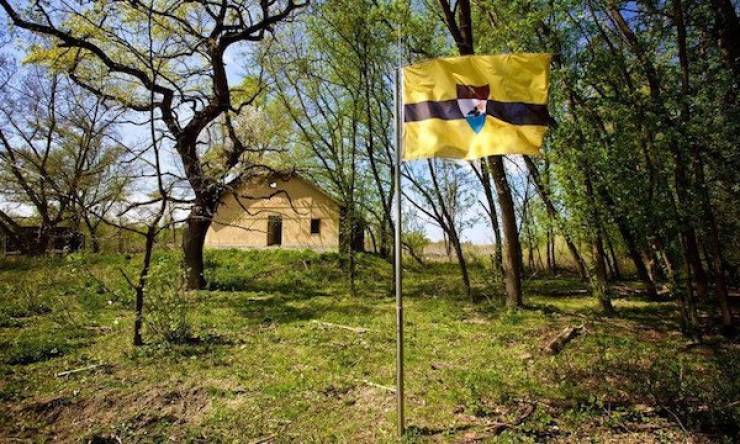 This is a border dispute that ended up in the creation of a tiny sovereign country. During the Yugoslav War in the 90’s, when the area was broken up into the smaller countries of Slovenia, Croatia, Serbia, Bosnia, Montenegro and Macedonia, the borders were fluid and constantly under dispute. There’s an area of four square miles between Croatia and Serbia that neither side wants to claim.

This area was considered “terra nullius,” or “no man’s land” until April 2015, when a Czech political activist moved in and called it the “Free Republic of Liberland.” He developed a flag, set up a government and demanded recognition. Right now, the only way to get there is by the Danube River, as both Croatia and Serbia won’t allow anyone to cross the border into Liberland. So neither side wants it, but won’t let the other side have it, nor anyone else have it.

That’s a preschool fight, if I’ve ever heard one. 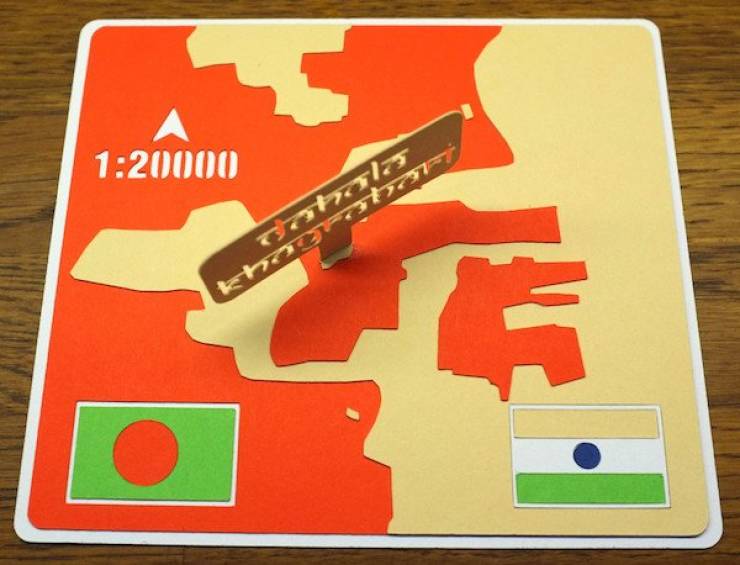 This is what’s called a third-order enclave. An enclave is when a piece of one country’s territory is entirely surrounded by another country’s territory. Most of the strange areas like this were cleared up in 2015 between India and Bangladesh, but this unique enclave still exists, so you’ll need to show a passport a couple of times. 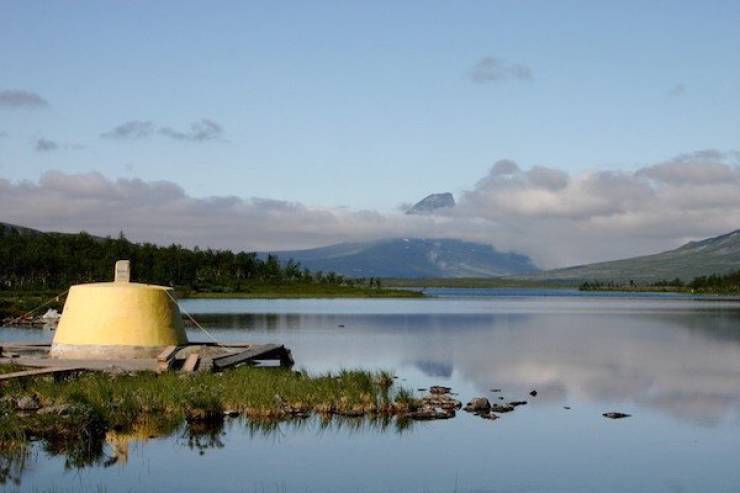 It’s got a different name in Finnish, Swedish and Norwegian, but they all translate to the same thing – Three Country Cairn. It’s got the name because it’s literally the point where all 3 countries meet.

It was erected in 1897 after decades of boarder disputes and skirmishes. It took a lot of negotiation to decide that the three countries met at a certain point in the middle of a lake, and a stone was placed there to remind everyone where their country ended.

In the middle of the ass end of nowhere, Scandinavia. 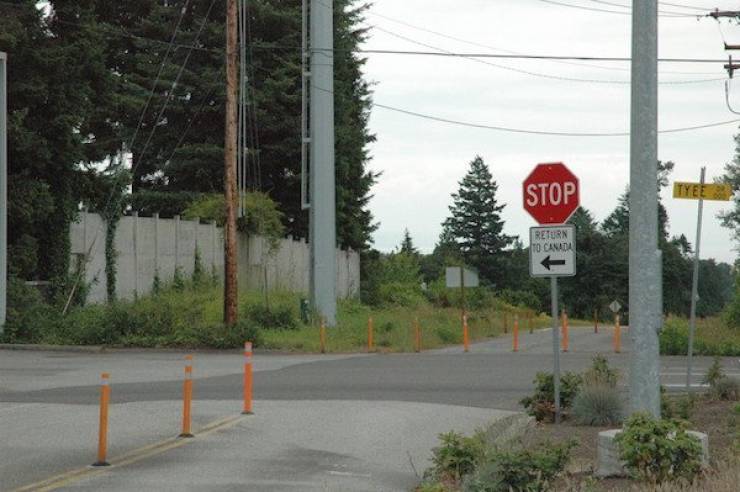 There were a lot of problems that cropped up when Canada and the U.S. started drafting the boundaries of the 49th parallel to officially divide the countries. The line goes pretty straight heading West until you hit Vancouver Island. The 49th tends to bisect the Island, so a deal was made that the entire island would go to Canada, but both parties failed to notice one thing; the Tsawwassen peninsula.

Located south of Vancouver, it’s a small spur of land that once belonged to Canada that was now given to the U.S. The fun part is that residents of Point Roberts, have to cross an international border every time they leave town. The town only has 1,300 residents and a primary school. Most residents need to commute 40 min through Canada, to get to work in Washington. 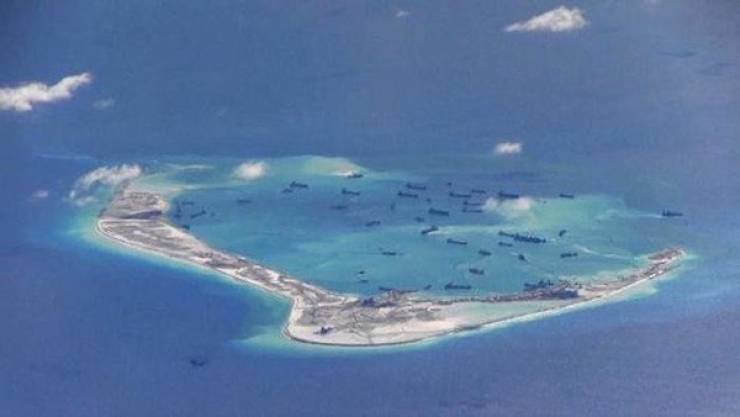 Covering over 154,440 square miles of ocean, these islands might seem like a small and trivial item, but they happen to find themselves at the middle of a dispute between 6 countries, due to geography and international politics.

Essentially China, Taiwan, the Philippines, Vietnam, Malaysia and Brunei have all laid claims to these islands and tried to establish a military presence on them. They’ve even tried to colonize them, only to get chased off by one of the other countries.

So what makes these islands so special? Oil, of course. 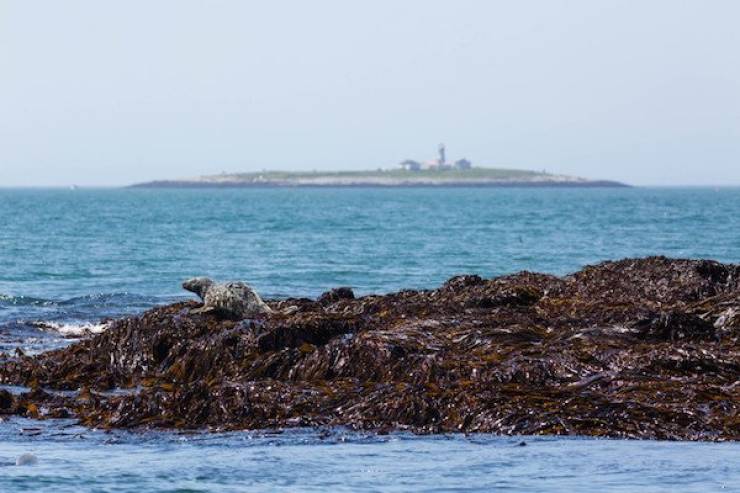 Most of the Canadians or Americans you might probably won’t know this fun little fact, but there are currently 5 border disputes between our two countries. While 4 of them have to do with a water area (who owns what piece of water), there’s one that’s still pretty contentious to this very day – Machias Seal Island, in the Gulf of Maine. Both sides claim this place, and neither wants to give it up.

No one really cared for the island during the American Revolution, and right after, this island was given to the US, and the British/Canadians living there lost their mind. To this date, Machias Seal Island is claimed by both. Canada went as far as building a lighthouse (much like the Market Island situation), and the U.S. refuses to acknowledge it and periodically asks them to not invade their country.

Canada, in return, asks that the US not invade their country, please and thank you. 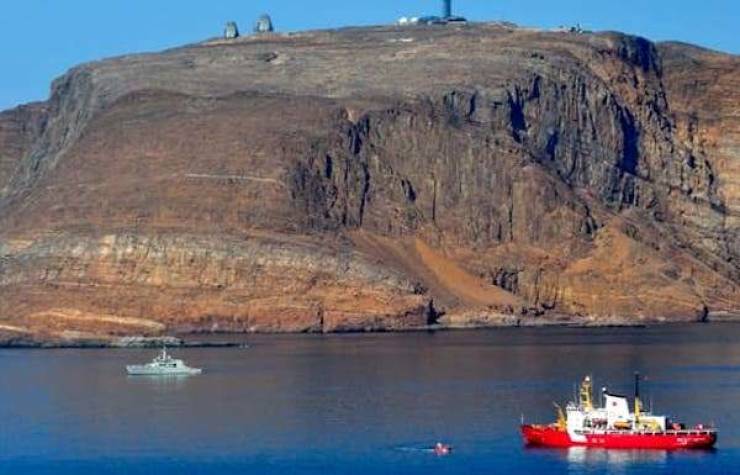 If you ever wanted to see a fight between two of the friendliest countries in the world, this is it. This island is situated between Ellesmere Island in Canada and Greenland, and residents of both countries have been exploring and existing on this barren island for centuries.

To date, no one has the rightful claim, though Denmark says it’s theirs (due to their control of Greenland’s foreign affairs), while Canada says that if anything, our border goes down the middle, so we could share.

Currently, there’s a joint task force trying to sort out who owns what, but for now, anytime the Danish go to the Island, they leave us a bottle of Schapps, while when we visit, we leave a bottle of Canadian Club and a sign that says “Welcome to Canada.” 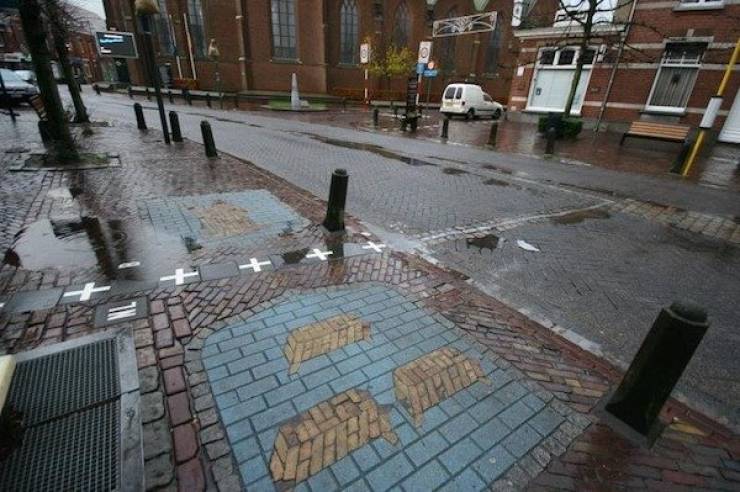 The town of Baarle is on the border between the Netherlands and Belgium, and is technically two municipalities. But the line that divides the two isn’t straight or even kinda curved – it’s a random puzzle of 22 different enclaves and border crossings. This town is so mixed up that sometimes spouses technically don’t sleep in the same country, as their bed lies over a border line.

The whole town is divided up by white crosses on the pavement and metal studs in the road, and is subject to different taxes depending on what side of the store/market you enter on, as well as hours fluctuate. There was a time where Dutch laws declared that restaurants had to close early, while Belgian laws said they could stay open. You’d just have to switch tables from one country to the next, to drink late into the night.

Predator 1 year ago
We do not own the land, at best we're a product of it, therefore any border ultimately, it's just a construct and reflects the low level of evolution (territoriality) we dwell in. In layman's term: any citizen of any "country" doesn't posses any land, by default; he/she (or the ancestors) has to pay for it. Stop feeding the illusion.
Reply
How to comment