Mom Alexa Bjorson was worried about her son’s solo flight. Because of his autism, she wasn’t sure how he fair on the trip – so she tried to prepare 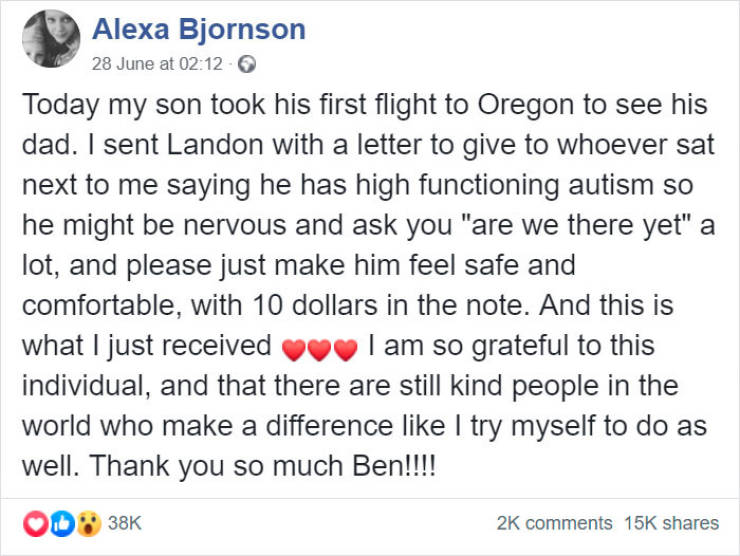 “I was feeling anxious and [Landon] was super excited to get to his dad and cousins. I was more worried about missing him then how HE would do on the plane. That was probably his 5th or 6th flight so he knows what to do and how to act. I was just worried about him being “annoying” to his seat partner,” Alexa told. However, she couldn’t let her anxiety prevent Landon from going on a trip. “This year we had a newborn baby, and funds were too low for me to fly 3 of us there and then 2 of us back. Landon was also having some bullying issues so we just wanted him to be able to enjoy the rest of his summer!” she explained.

And this is the response she got 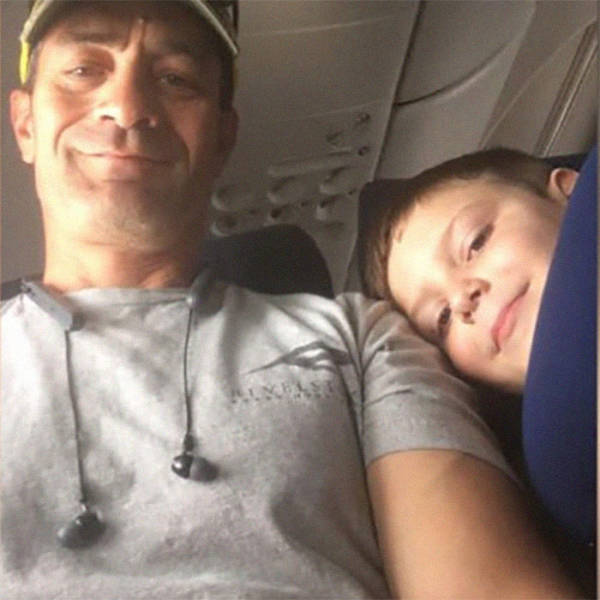 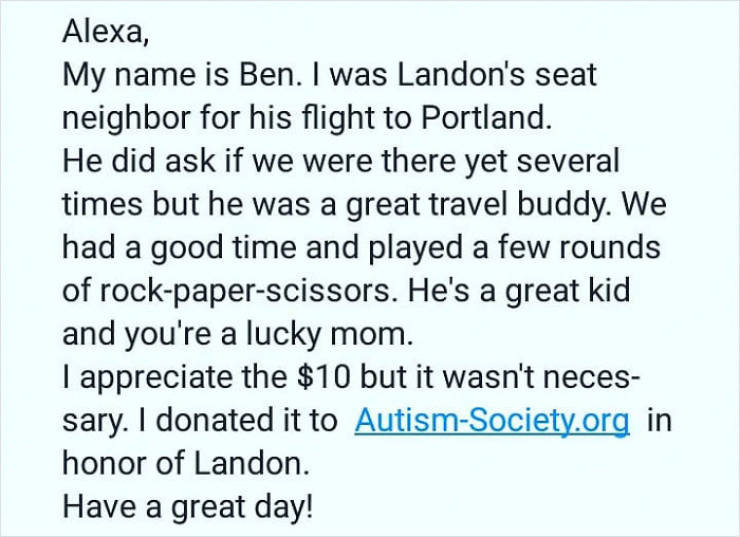 “I really couldn’t think of any other way to get my point and goal across besides a letter with an explanation and incentive for being kind. I wrote the letter an hour before we left for the airport,” she said.  In the letter, she explained her son has high functioning autism and asked the seatmate to be patient with the boy, as he may ‘are we there yet?’ several times.

When asked about Landon’s condition the mother said: “Landon started struggling from what we noticed around the 1 yr age after vaccinations. We waited a while to see if it was a phase, and we had him tested out 6 months to a year later. He was non verbal and very frustrated. Over time and lots of efforts, he has grown into an amazing little boy and can do pretty much anything other kids can. He does still struggle with eye contact, focus, and high emotions.” 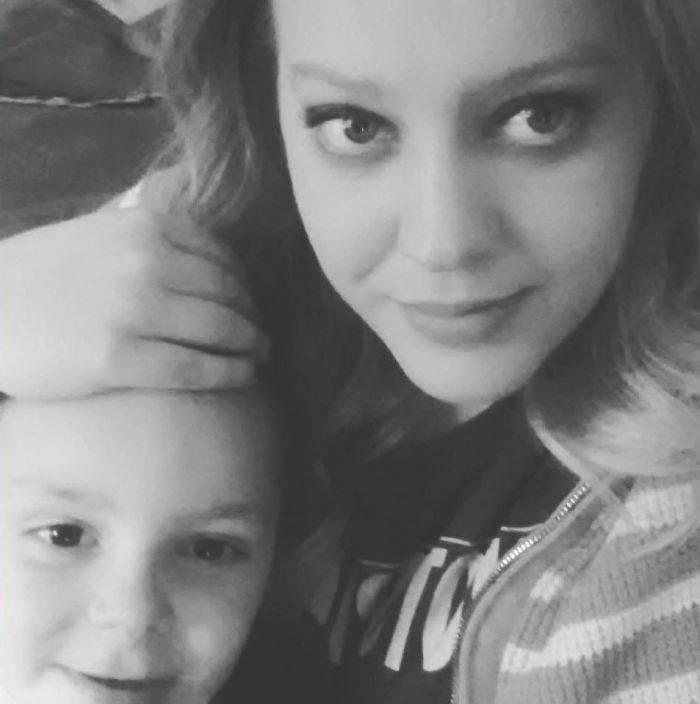 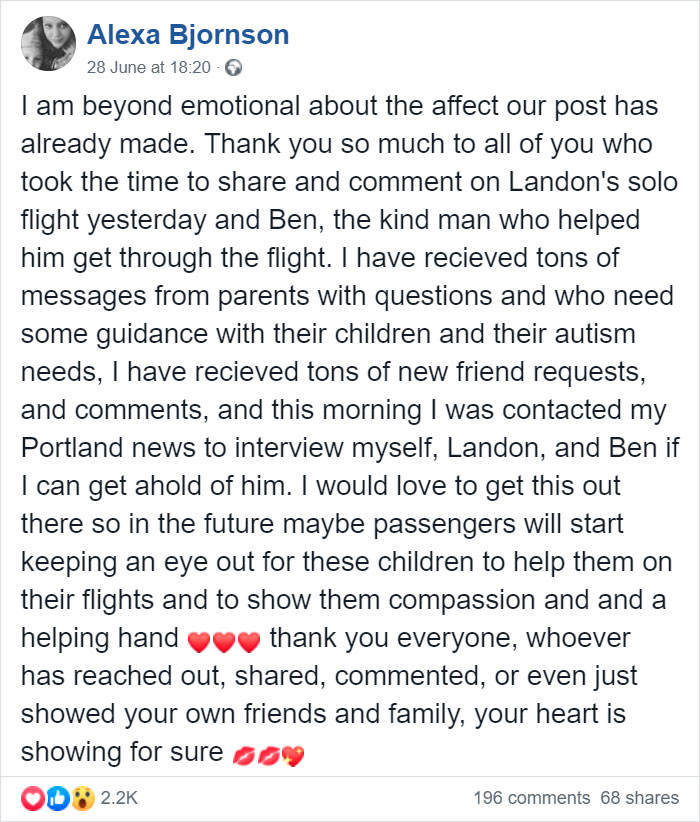 The mother was moved by Ben’s response. “I felt total relief and humbled when I got Ben’s message. I was overwhelmed and did cry a few tears just to see the humanity and love that still exists in the world.” Alexa is glad that she didn’t let her fear of being apart from her child prevent him from experiencing things and encouraged other parents to do the same. “Do what you think is best for your children and let them experience what life has to offer. We can’t teach them to be “scared” of the world. Because one day we won’t be here to guide them and they need to be prepared and have experiences like everyone else. Don’t be embarrassed or ashamed of what others have to say, because they are not in your shoes”

People in the comments loved the heartwarming story

The Marcus Autism Center offers several recommendations for parents traveling with children who have autism: Check flight schedules for the best times of day for your child to travel. If she can sleep on a plane, naptime may be a good time to fly. Plan ahead for your seats. Consider requesting bulkhead or aisle seats, particularly if your child likes to kick his or her legs or move around. Don’t forget to pack necessary coping or treatment items in your carry-on bag, like a change of clothes and medicines. Many airports and airlines have supportive resources and staff. Don’t hesitate to ask for the help you need. 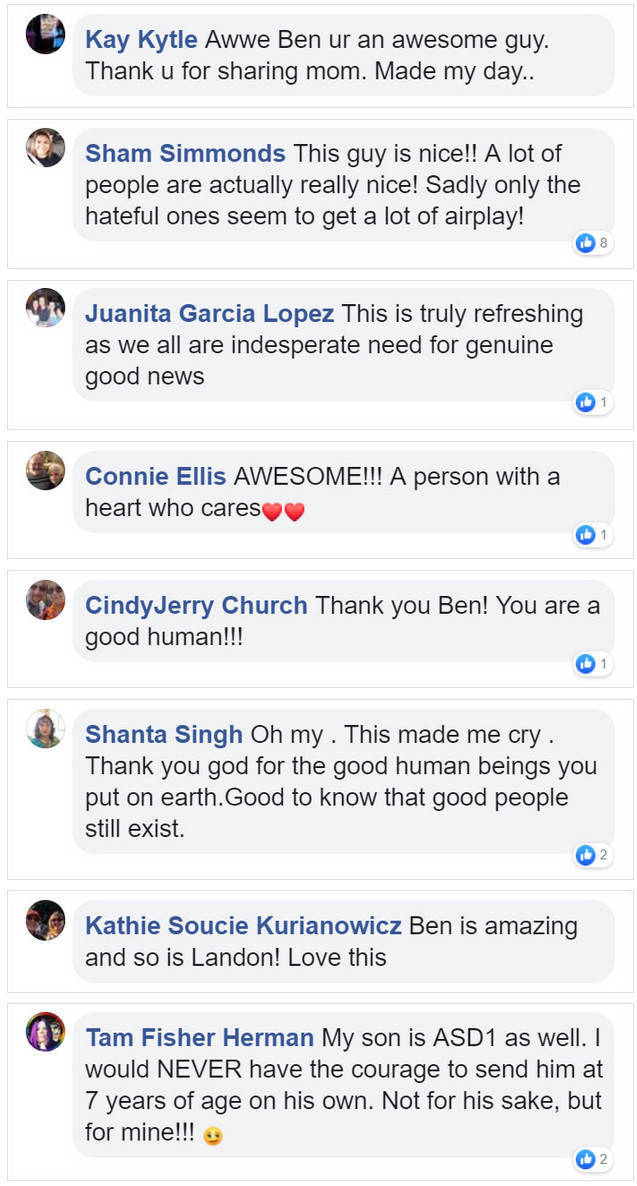