I dropped my goggles and was trying to reach down in the river and grab it but I pulled out a sheep skull by its sockets. Wasn’t as creepy in hindsight but 10 year old me was scared.

I had a dive master that told me once he was diving somewhere and found a full skeleton wearing diving gear with the air on the tank turned off pretty deep down. If I remember correctly they said they reported it to the police and it was found out the man’s wife turned off his air while they were on a dive to murder him.

When living off the coast some buddies and I would take regular fishing trips out to the oil rigs. We would always have some lines out and a few would dive down and try to spear some mangrove snapper or cobia. Once while I and two others were diving down checking out the structure we decided we needed to move due to lack of life around the rig..

we all get back in the boat and as one of my buddies is reeling in a line we had a red snapper baited on.. an easily 8-10ft tiger shark starts chewing on it right behind the prop, so close I could have poked his eye out. The idea that massive animal was in the water so close to me and two of my friends but no one saw it is terrifying. I bet he was watching us the whole time.

I’m a commercial diver, and was once on a job cleaning a potable water reservoir. I’d been in other reservoirs before, but this was by far the biggest, at 40×80 metres. To get in you had to open a hatch in the ground (the whole reservoir was underground) and climb down a ladder.

The hatch was in a corner, so when you were in the far corner of the reservoir, it was completely pitch black, and you just had to hope your light didn’t go out. I was about half way through a three hour dive when the batteries in my torch started going flat. I watched the beam get narrower and dimmer until it cut out completely.

It’s not a huge problem if you lose light, as you can just follow your umbilical back to the hatch. Just as I started walking back, some obnoxiously loud banging started somewhere in the reservoir. I was the only diver in there, so it both confused and scared the [email protected]#t out of me.

Needless to say I ran back to the hatch as fast as I could. I ended up getting my torch changed out and doing another hour in the water, but didn’t hear the noise again. I still have no idea what it was, but the combination of my torch going out and loud banging coming from somewhere gave me a hell of a fright.

I’ve done a number of dives, and the strangest thing I ever saw was a large deep freezer with a heavy industrial chain wrapped around multiple times with about 5 cinder blocks attached. It was very very rusted and the deep freezer itself had to have been 30+ years old, probably more. This was about 90 feet deep just off Vancouver Island, Canada.

The situation gave myself and the other divers the newbie jeebies. Logged the gps and depth co-ordinates and notified the police. We were able to find out what was inside, since one of the divers had friends with local police. 10 porcelain dolls….

When I was a kid swimming in the lake at summer camp, I dove underwater and I swear I saw someone in SCUBA gear hiding underneath the dock watching us. I told the lifeguard, but he wasn’t able to find anyone.

I used to do a lot of night dives hunting for lobster off the coast of California. We’d start at 9 or 10 at night so everything is obviously pitch black besides where we were pointing our lights. Every so often I’d get this unshakable feeling that something big was watching or following me. Sometimes I could quiet that part of my brain and continue with the dive.

Other times I couldn’t shake the feeling and would end the dive after a few minutes. It’s a hard feeling to describe but I guess I’d compare it to being in a haunted house but 50ft underwater in complete darkness.

Got charged by a mother humpback, her curious calf had swum around us and we were between her and the calf. Two of us never saw it coming, we were watching the baby, but our third diver watched her come. She kicked down and swam under us last minute. We didn’t see anything until that 60ft freight train passed just

You can dive in man made lakes and check out what’s left of old flooded homes and communities. It’s pretty dark and spooky down there no matter what, especially when you think of all the big fish swimming around that are barely silhouettes until they’re close.

My buddy likes to dive in lakes. He said the creepiest thing, by far, is finding cemeteries 100 ft + beneath the water in the dark, eerie quiet.

I used to teach canoeing lessons to Boy Scout troops at a local neighborhood lake. Super small lake that’s not very deep but the bottom was hella thick with vegetation. The water was “dark” so you couldn’t see your hands in front of you for more than like 5 inches under the surface. There was a small clubhouse, an open pavillion, and a playground all on the property.

When doing lifeguard work in the water during a swim test, my sunglasses fell off my head. I dove down to find them and [email protected]#t you not – I found a sunken, entangled hospital gurney at the bottom of the lake. It took a few people to untangle it but how the eff it got there was beyond me. Clearly it had been under the water for years…

Not a diver, but heard from old divers that worked for the corps of engineers, that There’s some huge catfish around the bottom of the dams. Like the size of vans.

So, 3 days ago I went snorkeling off Mnemba island in Zanzibar. Everything went normal, and we start heading back. I grab my net bag and put my black fins, black mask, snorkel and black wetsuit inside.

Once back ashore, I grab my bag, jump off the boat and head to the rental office to return the equipment. At that point I feel my bag is moving somehow.

At first look, it seemed like a flat, black, worm squirming quickly. After rotating the bag, I realised I was looking only at the tail of an otherwise ~1m long Black sea-snake, one of the most venomous reptiles I could find, trying to get out of the net.

How it got there, I have no freaking clue. 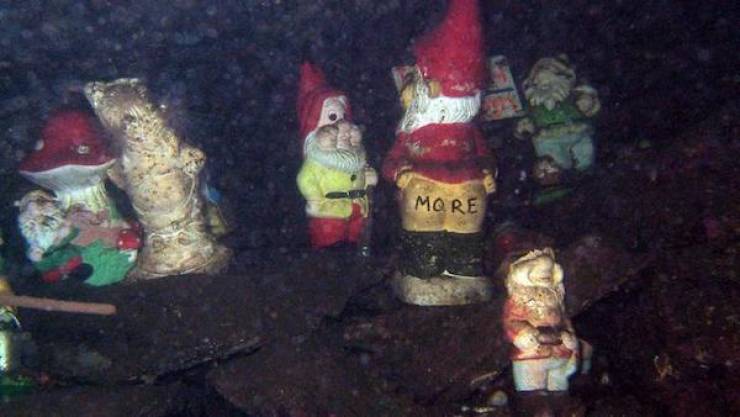 There’s a sea-loch in Scotland called Loch Fyne that is popular with divers.

Once on a dive, in what I thought was a remote part of the loch (I used a boat to get there), I was descending a vertical wall and came across garden gnomes around 10 metres down, just sitting in the ledges. One was fishing.

We concluded that it was another dive club having fun.

An old WW2 ammunition ship off the south cost of england was full off brass topped shells. Most had been taken by divers over the years and it was now very rare to see them, apart from a pile in one corner of the ship.

This pile of shiny brass metals was miraculous untouched and remarkably clean after spending years underwater and you only found out why if you swam near then.

Out of the murky darkness the largest eel i have ever seen snakes forward, without exaggeration this thing had a head the same size as a horse’s head, full of jagged teeth. I could not see the body as it looped into the dark and deeper into the ship. No one got near those shells.

Turns out for years this thing had been guarding the shiny brass shells, slithering over them making them shine. We found out at the bar later that he was famous in the area and many people went to the wreck just to see him. No idea why this giant creature was guarding them like a dragon and its horde, but some said eels are like magpies and like shiny things.