Daffy made his debut in 1937 on a short called ‘Porky Duck Hunt’ by Tex Avery and Bob Clampett. Known as one of the first ever ‘screwball characters’ Daffy has gone on to become an iconic work of art.

This classic carrot-chewing bunny first made his appearance in a 1940 short known as ‘A Wild Hare’ by Leon Schlesinger and voiced by Mel Blanc. Bugs is now one of the most recognizable cartoon characters in history and is a true icon of American animation.

William Hanna and Joseph Barbera created these two classic characters in 1940 for MGM. A simple tale about a cat chasing a mouse, this show has earned a total of 7 Academy awards for best animated short film.

Popeye was first created in 1929 by an artist named Elzie Crisler Segar, but didn’t become an animated cartoon until the early 30’s. Nowadays, it’s hard to find someone who doesn’t recognize the sailor with his massive arms, pipe, and squinted eye.

Scooby Doo, who’s first name is actually “Scoobert” was created in 1969 by William Hanna and Joseph Barbera. Scooby and his gang have been busting ghosts and criminals ever since.

William Hanna and Joseph Barbera created this stone-age character back in 1960. Along with this family and neighbours, their relatable yet exaggerated adventures have blessed the tube ever since.

George Studdy introduced this loving character to the world in 1922. By the mid 1920’s, he was a huge hit in the states, and found himself in books, comics, cartoons, films, and even life stage shows. 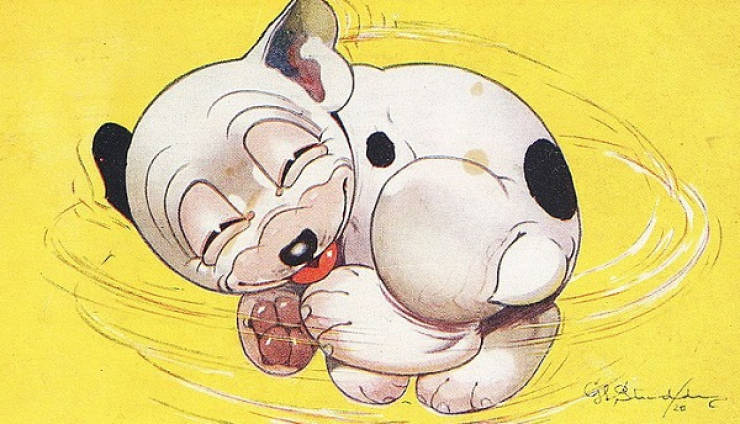 Donald Fauntleroy Duck is right up there with Bugs as far as recognizable cartoon characters go. Making his appearance in “The Wise Little Hen” he rocketed to the top of pop culture, appearing in over 152 cartoon shorts between 1934 and 1959.

Perhaps one of, if not THE most famous cartoon character on earth, Mickey was created under the name “Mortimer Mouse” before Walt Disney’s wife suggested changing it to “Mickey.”

Otto James Messmer created this iconic character during the ‘silent era’ 100 years ago! Felix made his debut in a short film called “Feline Follies” before making it big and becoming a main-stay in newspaper comic strips.

Tymusz 8 month s ago
#9 a mickey is also a unit of measurement for your computer-mouse.
Reply