Would You Be Able To Recognize These Celebrity Guys From 90s Movies Now? (14 pics) 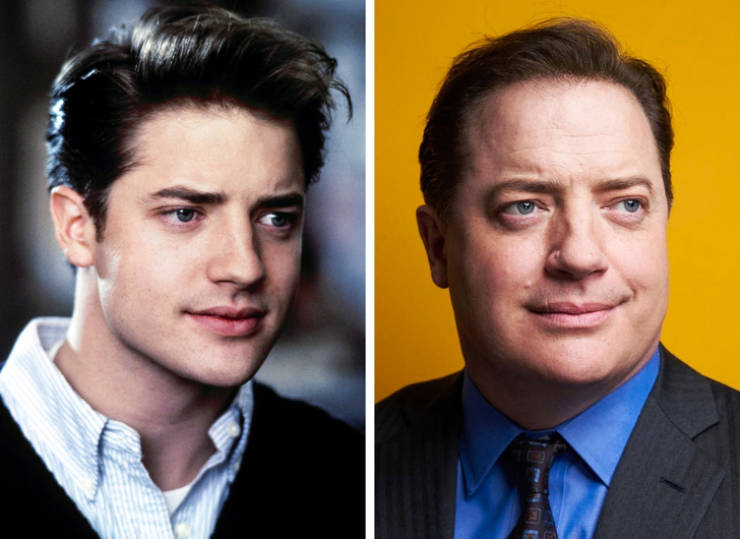 At the age of 24 Fraser acted in the movie Encino Man. It was his first big role that, unfortunately, not many people remember. However, starring roles in movies like George of the Jungle (1997), The Mummy (1999) and all of its sequels, and Dudley Do-Right (1999) made the actor world-famous. Today Brendan is 50 years old and his acting career is still going strong.

Fraser was married to actress Afton Smith and they have 3 sons. Brendan has dual-citizenship, in the USA and Canada, which is why he speaks French fluently. Additionally, he is fond of photography. 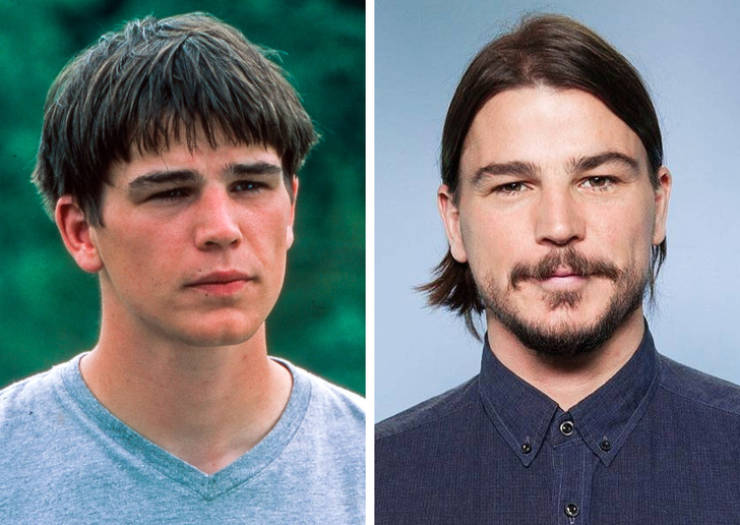 Josh Hartnett was 20 when he played one of his first main roles. In the movie The Faculty (1998), where something was wrong with the teachers of a college, he worked together with Elijah Wood and Robert Patrick. That sounds like a good start, doesn’t it? Since then he seems to have chosen movies for the sole reason of breaking his fans’ hearts. Now the actor is 41 years old and there are several movies that are waiting for him.

Since 2012 Hartnett has been in a relationship with actress Tamsin Egerton. The couple currently lives in England and they have 2 kids. 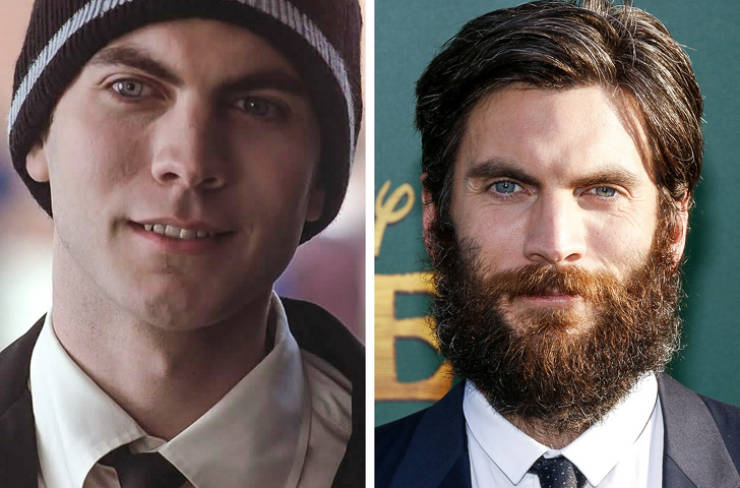 Wes Bentley played in the movie American Beauty (1999) at the age of 21. There are other highly rated movies in his filmography as well, like The Hunger Games (2012), Interstellar (2014), and Mission: Impossible — Fallout (2018). Wes is turning 42 soon, but he’s managed to keep the same charm and he has also has grown a thick beard. The actor couldn’t stay away from various temptations on his way to success. In July 2009 Wes confessed to his friend that he needed help to fight alcohol and drug addiction. Bentley started a step-by-step rehab program and continued his career afterward. The documentary My Big Break shows Bentley’s real life — his struggles with addiction and star dizziness.

In 2010 Wes Bentley married producer Jacqui Swedberg. The couple has 2 kids: a son and a daughter. 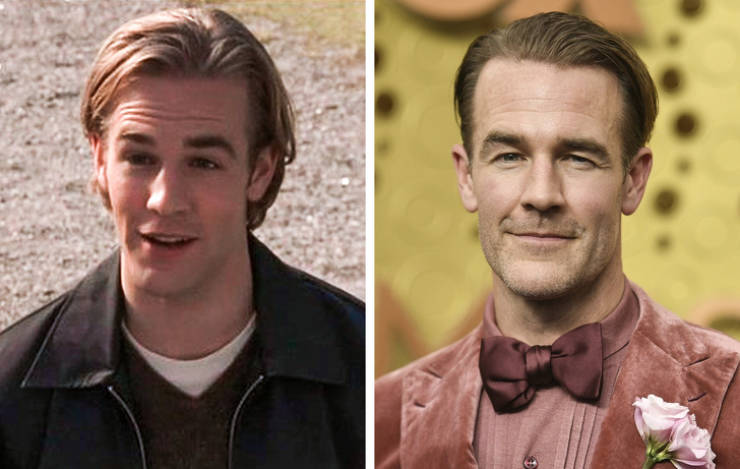 A 42 years old James is the father to more than just a couple of kids. He is married to business-consultant Kimberly Brook, with whom he has 5 kids. In October 2019 the couple announced that they are expecting their sixth kid. 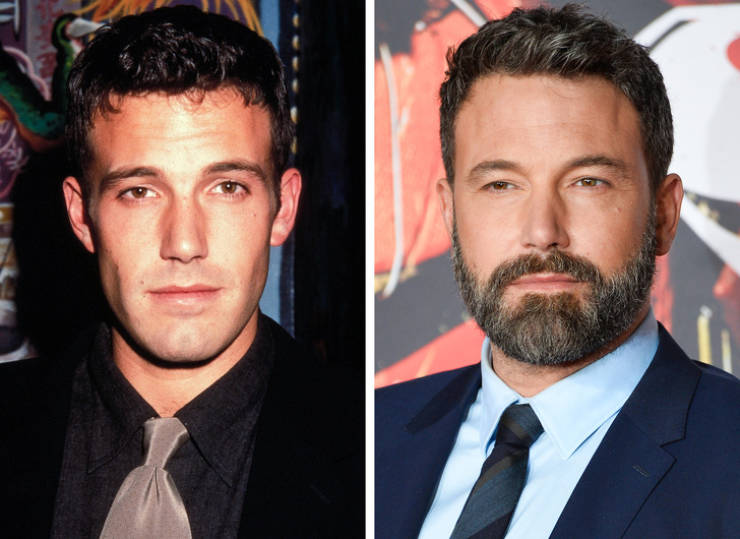 Benjamin Géza Affleck-Boldt started to act in movies at the age of 6. At the age of 19, he was already conquering the hearts of his girl fans and he continues to do so today. Not only have movies like Good Will Hunting (1997), Shakespeare in Love (1998), and Pearl Harbor (2001) made him famous, but they’ve also made him rich. Affleck tried himself in the role of Batman in Batman v Superman: Dawn of Justice (2016) and now a 47-year-old actor is going to play, together with Matt Damon, in Ridley Scott’s The Last Duel.

From 2005 till 2018 Affleck was married to actress Jennifer Garner. The couple has 2 daughters and one son. 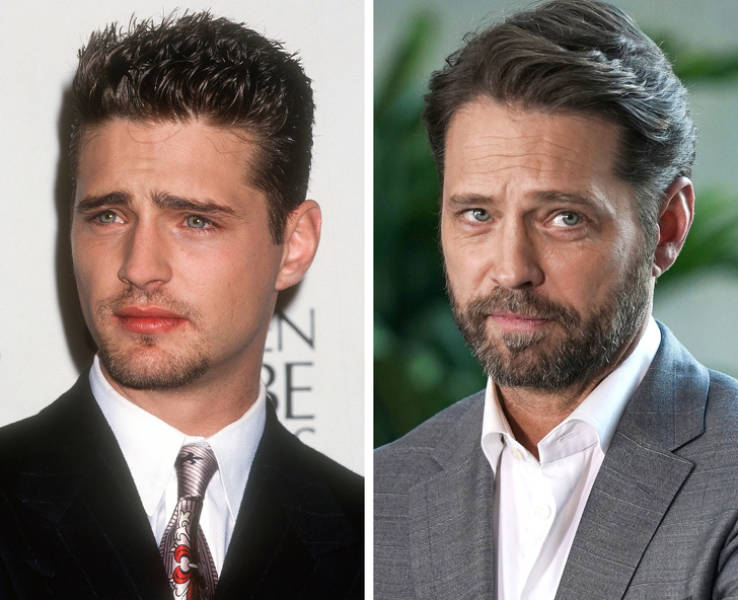 It’s him — the handsome school newspaper editor Brandon from the Beverly Hills, 90210 TV series (1990-2000). The teenagers of the 90s used to tune in after dinner so they wouldn’t miss a single event from the lives of Brandon and Brenda Walsh, Kelly Taylor, Donna Martin, Steve Sanders, and David Silver.

The charming Jason Priestley has played in more than 100 roles in movies within his career, but there were no other cult ones among them. There is a chance he will make headlines again with the release of the renewed TV series Beverly Hills, 90210 with almost the full cast of actors from the 20-year-old hit. This seems to be a good present for Priestley’s 50th birthday.

Today the actor lives together with his family in Los Angeles. Since 2005, the actor has been married to makeup artist Naomi Lowde. The couple has 2 kids: a son and a daughter. 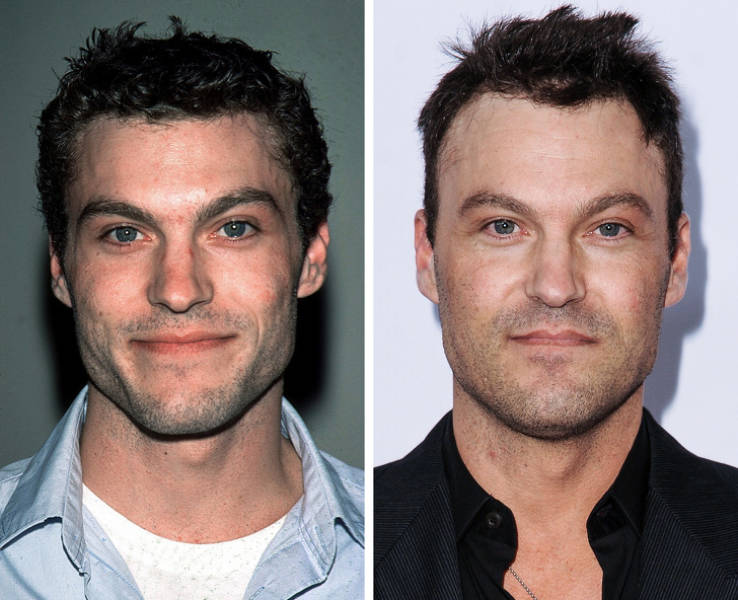 Since 2010 Brian has been married to actress Megan Fox. The couple is raising 3 sons. 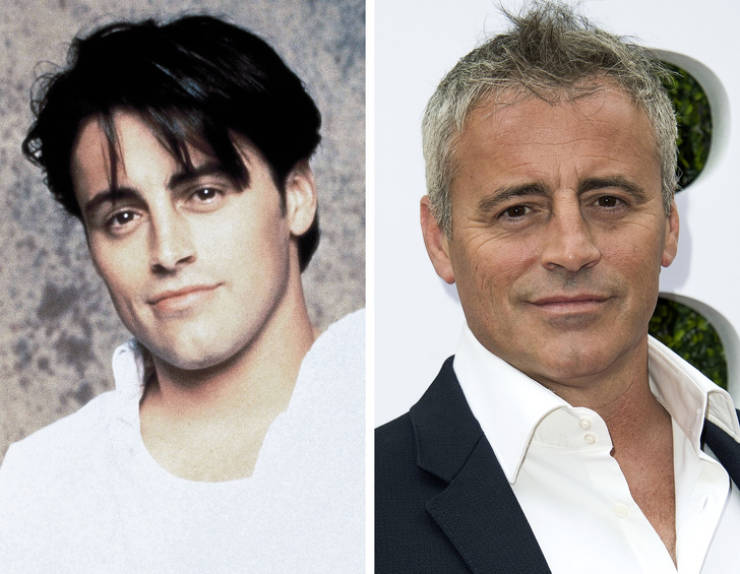 Matt LeBlanc’s main role is undeniably Joey Tribbiani from Friends. During 10 seasons he was so charming that spectators forgave his silliness and other sins. He also acted in the sitcom’s sequel called Joey, but this TV series failed to repeat the same success as Friends.

Nevertheless, Matt hasn’t disappeared from screens, because Friends is being watched by each new generation. The actor said in an interview that once, in one of the TV series’ young fans confused LeBlanc for Joey’s father. Years don’t go unnoticeably of course but they look good on Matt.

Today the actor has become the host of Top Gear’s new episodes and recently he also played himself in the series Episodes (2011 — 2017). Until 2006, LeBlanc was married to model Melissa McKnight. While they were married they had a daughter, Marina Pearl. 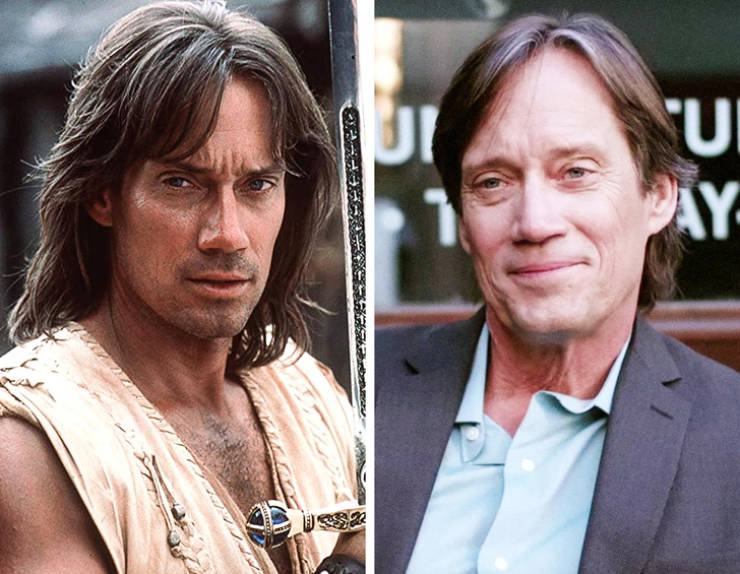 Kevin Sorbo is remembered as the main character in the TV series Hercules: The Legendary Journeys (1995 — 1999). He has been acting a lot since then (and continues doing it) but, unfortunately, not in the highest-grossing films. The actor is 61 years old now and he is married to actress Sam Jenkins. She played Serena, Hercules’ wife, in the TV series mentioned above. Kevin and Sam have 3 kids: 2 sons and a daughter. 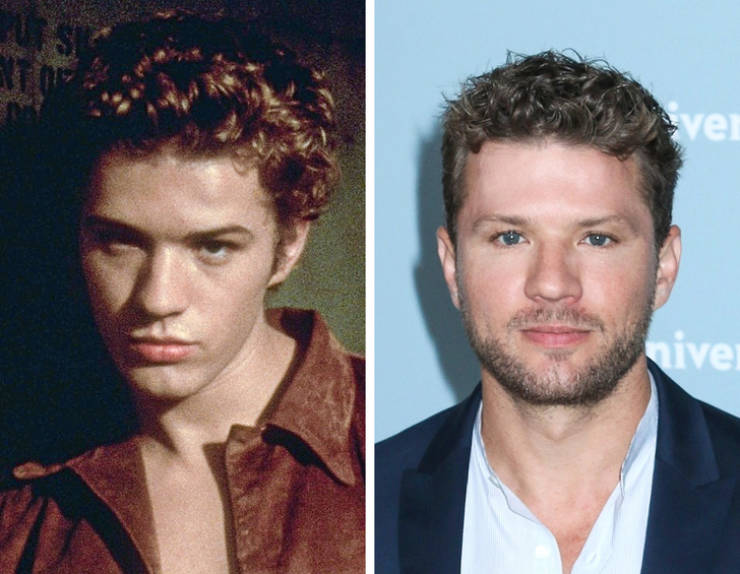 Ryan Phillippe became famous after playing the main role in the movie Cruel Intentions (1999). It was not his first role in the cinema, but it was definitely one of his most significant. Before this movie, he played in films like I Know What You Did Last Summer (1997), Little Boy Blue (1997), and 54 (1998). Today Ryan Phillippe continues his acting career and surprisingly looks younger than his actual 45 years. The actor is fond of martial arts and has a black belt in Taekwondo.

From 1999 to 2008 the actor was married to Reese Witherspoon, who became the mother of his daughter Ava and son Deacon. Phillippe also has daughter, Kai, from actress Alexis Knapp. 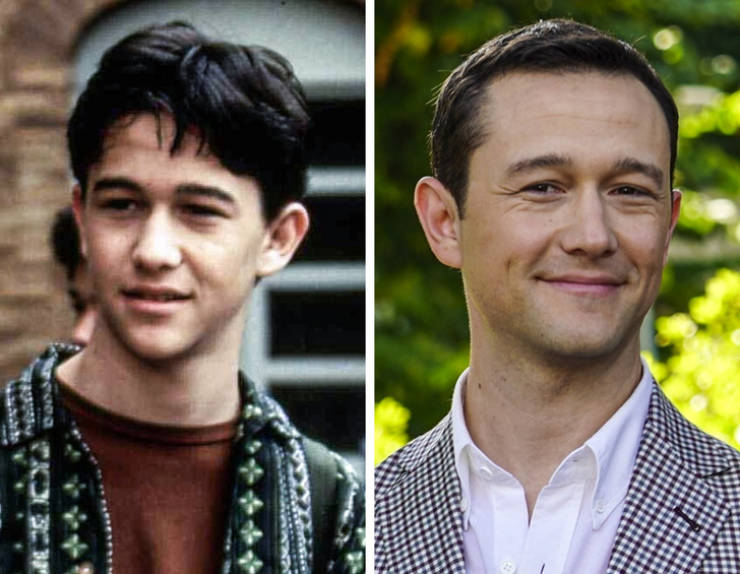 Joseph Gordon-Levitt has been actively playing in movies from childhood. It was at the age of 16- 17 when he started to get bigger roles. Shooting in the series 3rd Rock from the Sun (1996 — 2001) where he played Tommy Solomon, became a big step in the actor’s career. Joseph’s most significant works are Inception (2010) and The Dark Knight Rises (2012).

Since 2014 Gordon-Levitt has been married to Tasha McCauley. The couple has 2 sons. 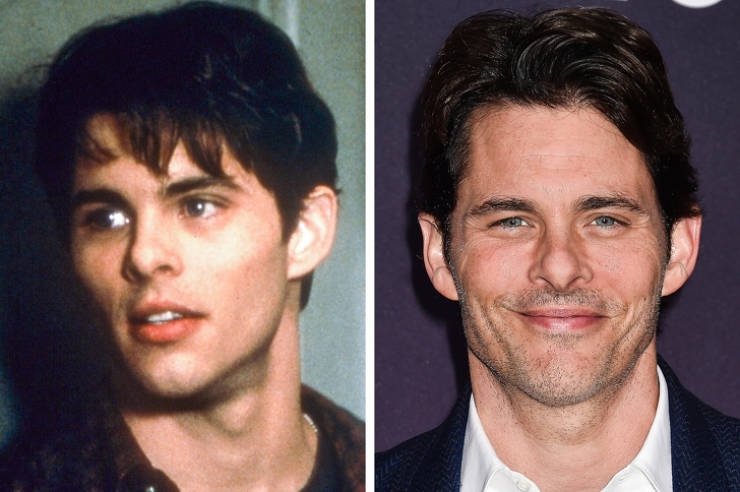 Today the actor is 46 years old and he still appears on screen, including filming in the series Westworld (2016-present). Marsden has 3 kids: a son and a daughter from his ex-wife Lisa Linde, and a son from his ex-girlfriend — model Rose Costa. 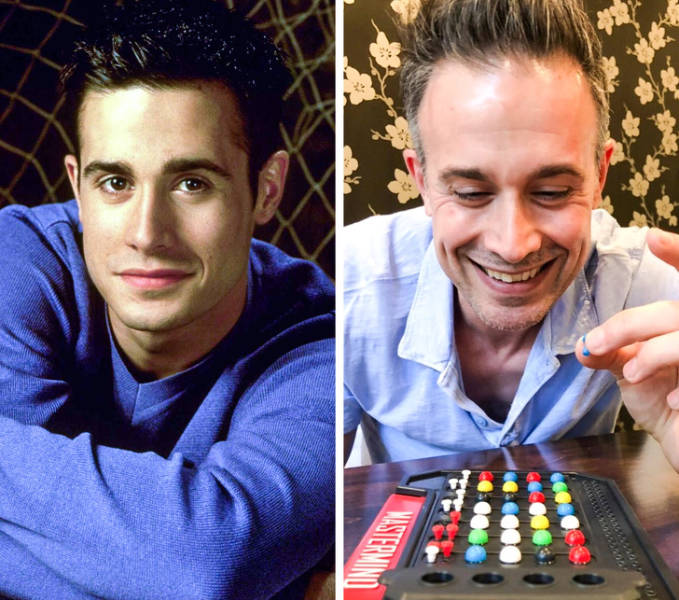 In 2002, Prinze Jr. married actress Sarah Michelle Gellar. The couple has 2 kids, a daughter, Charlotte Grace and a son, Rocky James. Freddie is fond of dancing, collecting comics, and is a big fan of the London football club ’Arsenal’ as well as East-Asian cinematography. 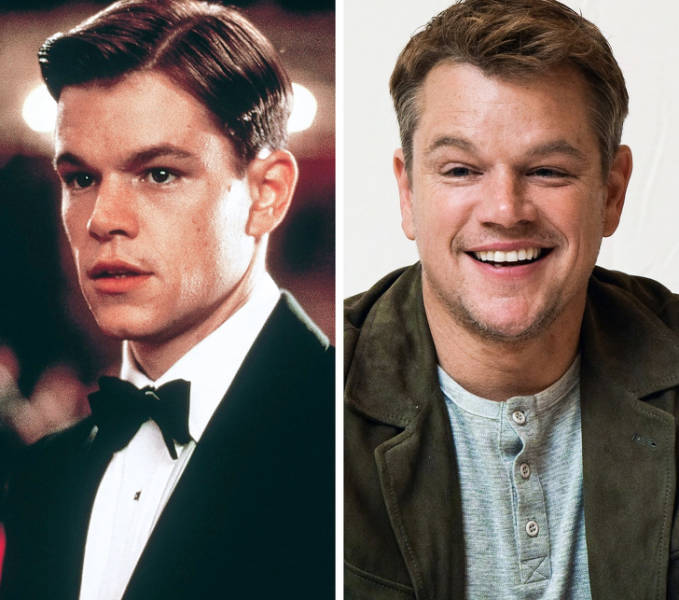 Matt Damon is 49 years old and he is still as handsome as he was 30 years ago. The actor played his first role in the movie School Ties (1992). 5 years later the movie Good Will Hunting (1997) appeared on the big screen and made him famous. Among Matt’s brightest works are The Talented Mr. Ripley (1999), The Bourne Identity (2002), and The Martian (2015). One of Damon’s movies called Ford v Ferrari is almost the most anticipated premiere of the fall.

Here is an interesting fact — the actor had been a smoker for 17 years, but he managed to quit this bad habit for the health of his future kids. Since 2005, Matt Damon has been married to Luciana Bozán Barroso. The couple has 4 daughters, including Luciana’s daughter from her first marriage.

Condition 6 month s ago
they all look exactly the same...
Reply
3

First 6 month s ago
Cause guys age like wine.
Reply