Recently, a couple went viral after this man proposed to his girlfriend at KFC 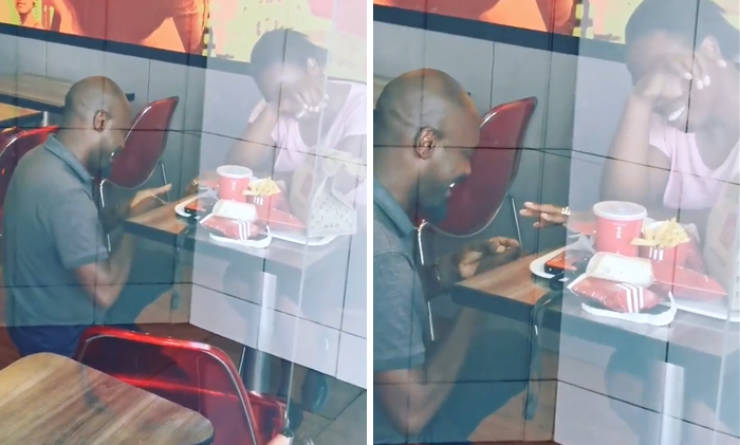 The heartwarming moment was captured by a passer-by who spotted the man kneeling down on one knee at the KFC restaurant in Vaal, South Africa. In the video, the girlfriend can be seen tearing up and saying yes. The two seemed incredibly happy and were grinning from ear to ear to onlookers who were taking photos and videos.

However, this journalist dragged the man down for being ‘broke’ 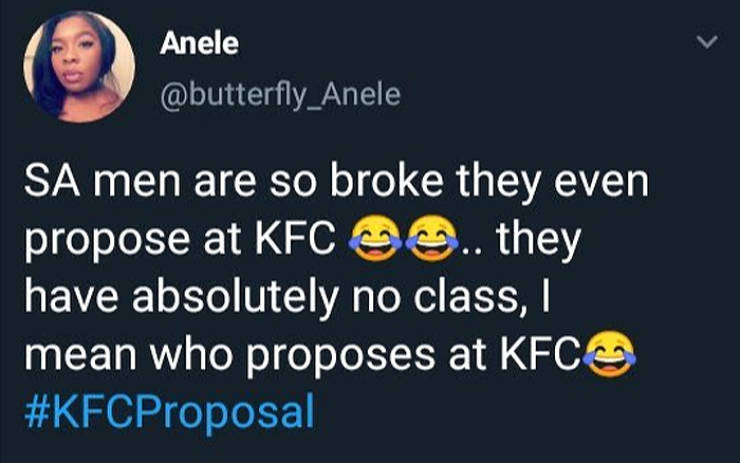 “SA [South African] men are so broke they even propose at KFC. They have absolutely no class, I mean who proposes at KFC,” the woman wrote. Anele’s tweet was met with people’s anger, who couldn’t simply believe that someone would drag a man down like for simply proposing to his girlfriend. As of now, the tweet has been taken down and the person behind it made their account private. 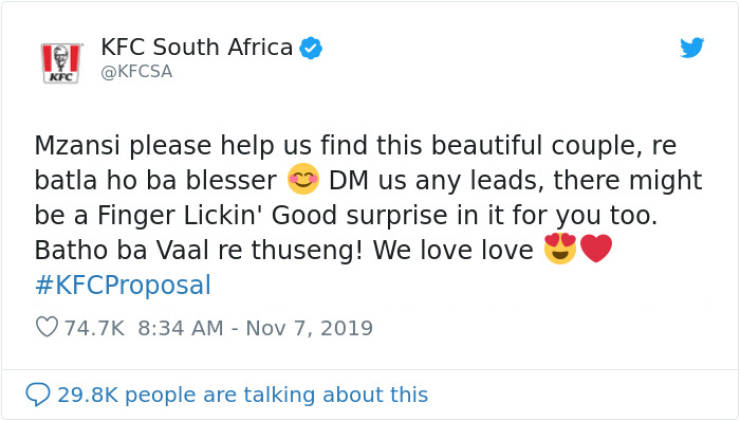 “Please help us find this beautiful couple, [we want to be blessers]. DM us any leads, there might be a Finger Lickin’ Good surprise in it for you too. [Vaal people, help us]! We love love,” KFC South Africa wrote in their tweet. 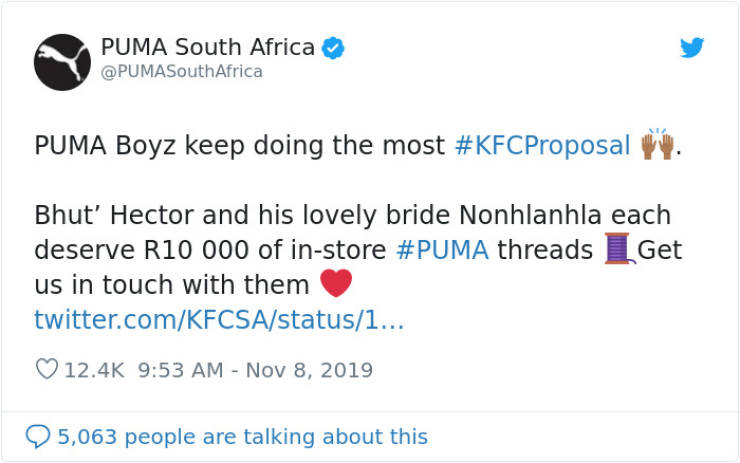 Such global brands as PUMA, Huawei, McDonald’s, Uber, and Audi have offered their help. PUMA gifted an R10,000 (approximately $680) voucher, Huawei—two of their phones, but the Standard Bank topped them all by offering the couple to clear their loans up to R300,000 (over $20,000!). 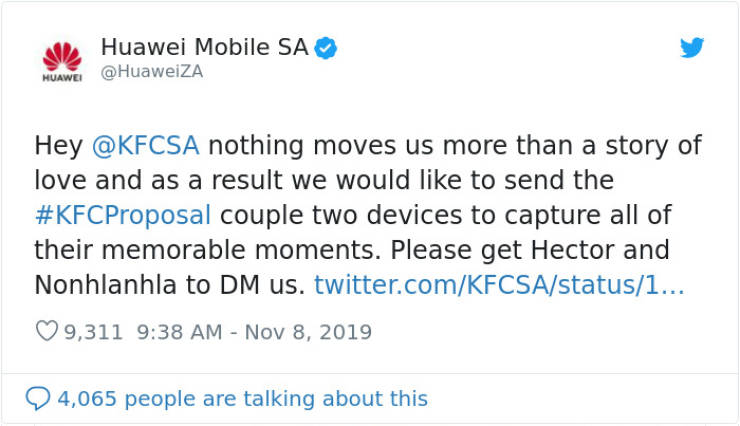 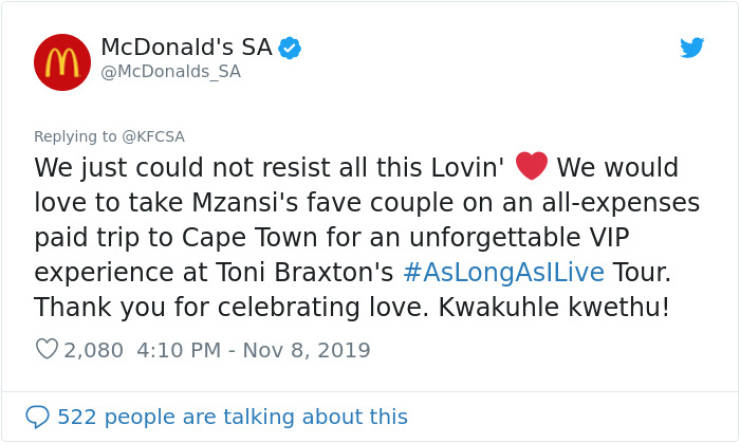 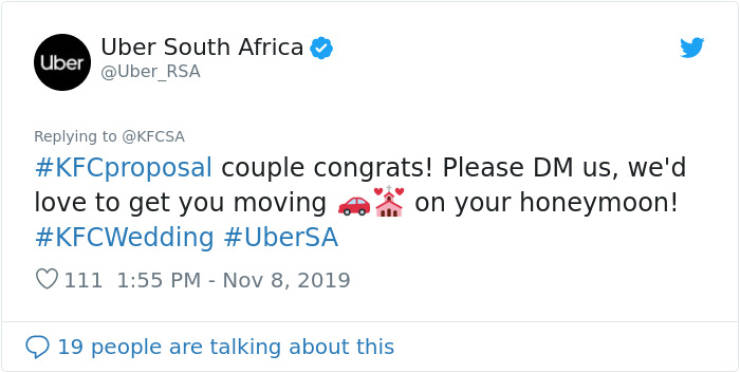 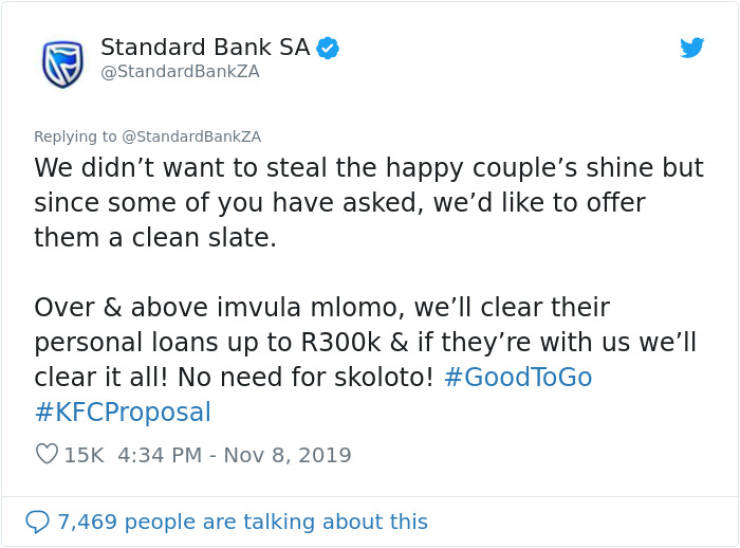 The couple were also gifted groceries worth more than $1,300 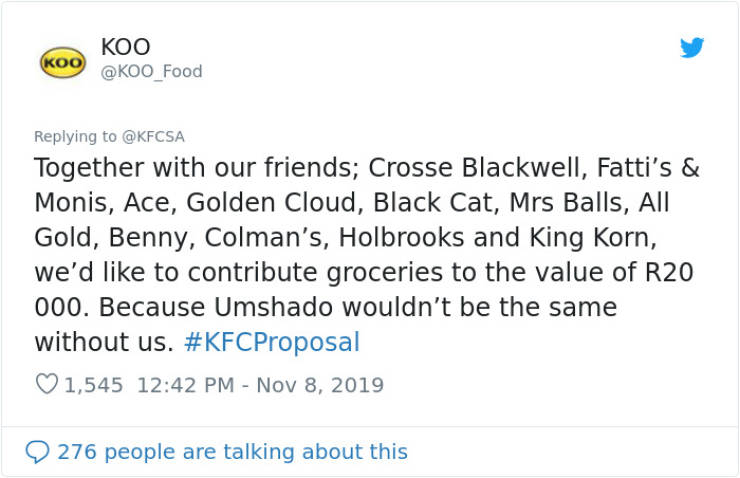 From food, to even the wedding rings—the people on the internet took care of everything 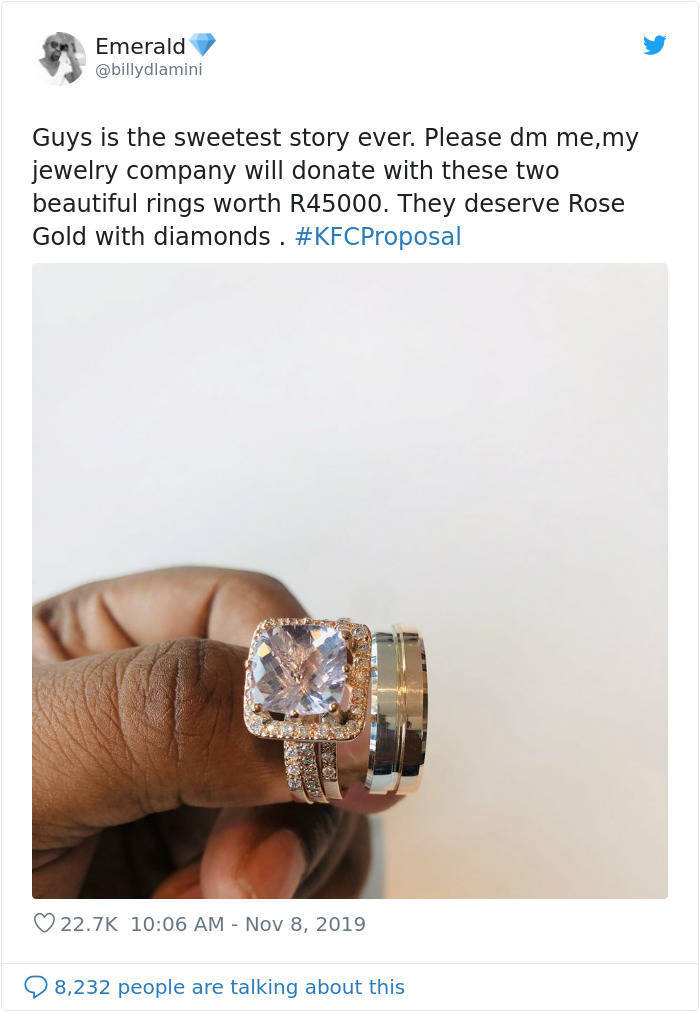 Numerous people from various businesses have stepped in, offering their services and goods for free. Including wedding rings, cake, dress, transport, groceries, SPA treatments. And probably all the other things that you can imagine. 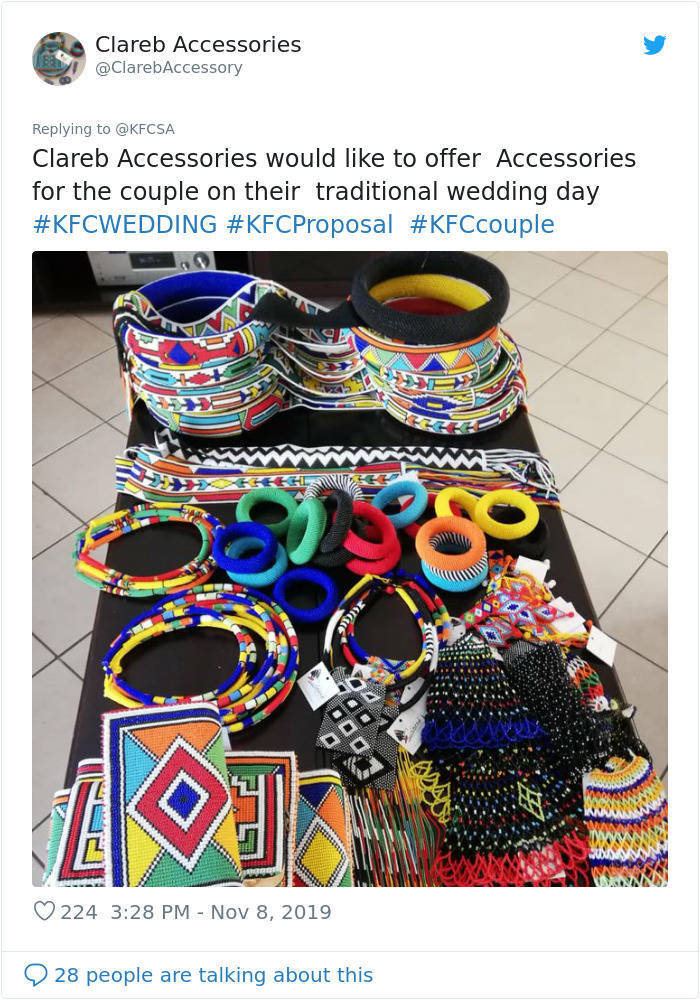 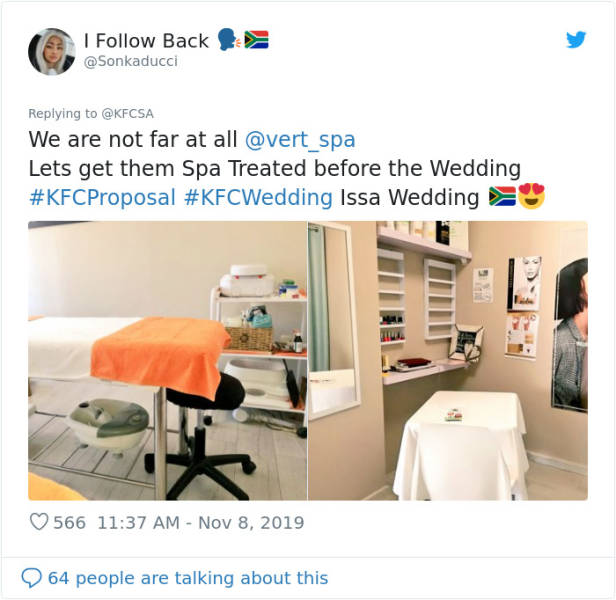 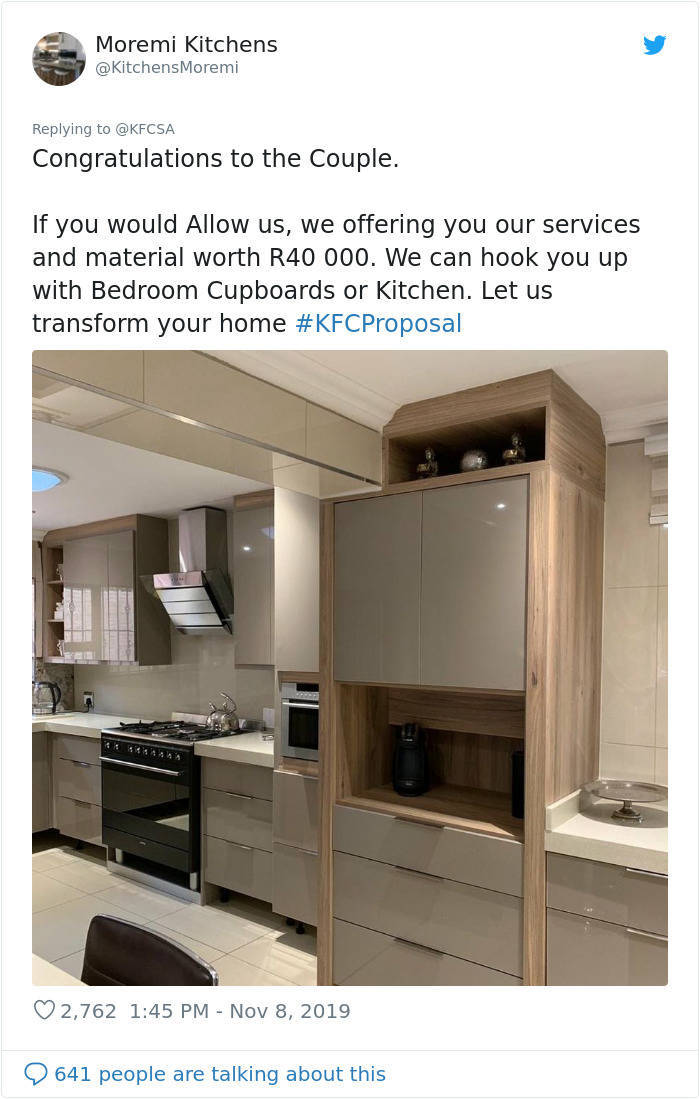 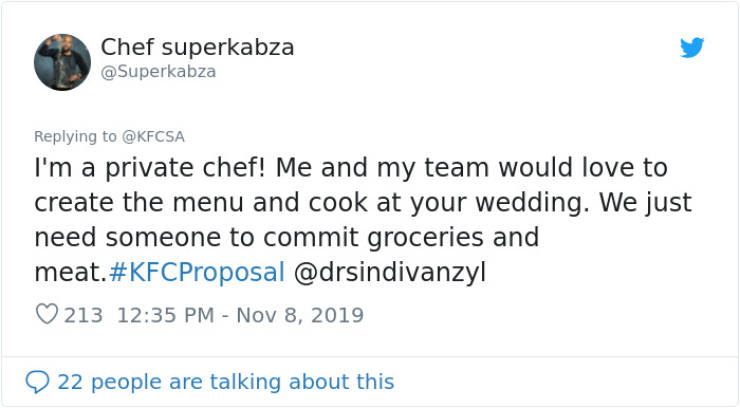 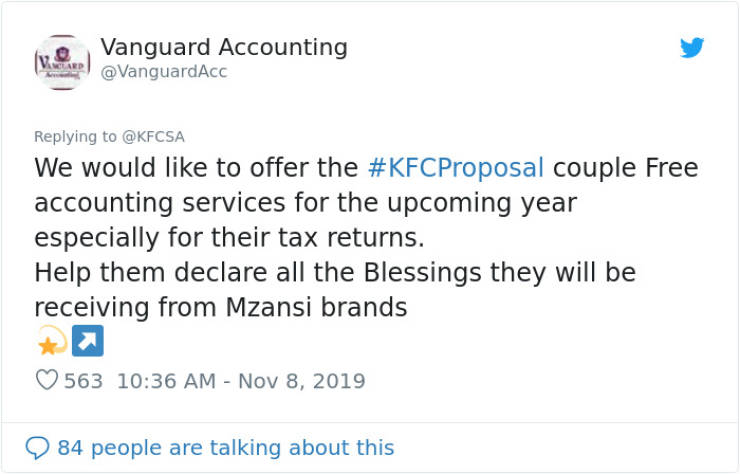 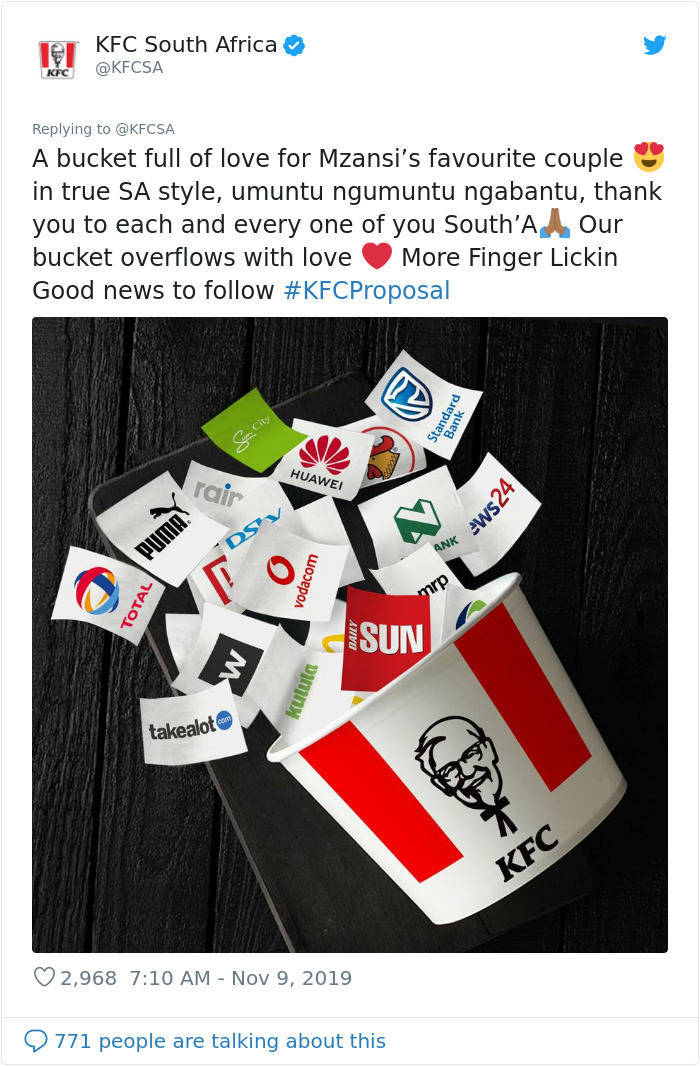 “A bucket full of love for Mzansi’s* favorite couple in true SA style, umuntu ngumuntu ngabantu,** thank you to each and every one of you South’A. Our bucket overflows with love,” they wrote on their Twitter page.

**Umuntu ngumuntu ngabantu—a saying that means, “a person is a person through/because of (other) people” or—”you are who you are because of how you relate to others around you.” 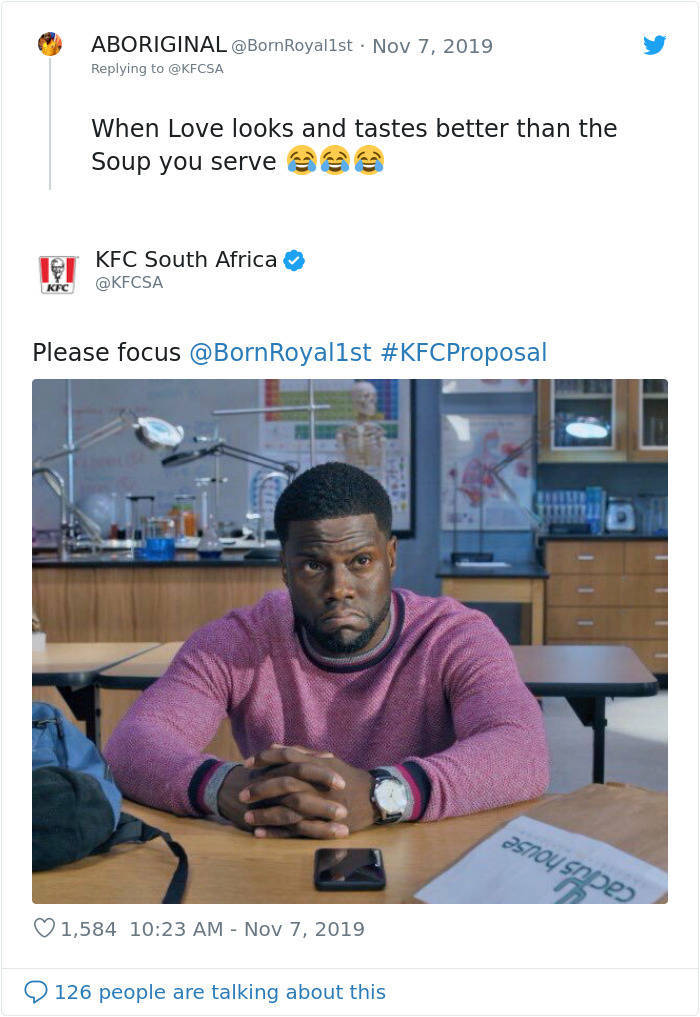 Different 6 month s ago
Plot twist - this journalist is an old friend.
Reply
0

salamoon 6 month s ago
was this a race who donates more? enough is enough.

however im happy for them, and that b*tch anele did the completely opposite job she wanted....

Skier 6 month s ago
Holy sh*t! I wish all people were even 1/100th this kind all the time. The world would be such a happy and grateful place.
Reply