In Elf, the shower scene wasn't in the original script, but it was ultimately added after director Jon Favreau learned that Zooey Deschanel was a good singer.

In an interview, Favreau said he wrote it into the script because Zooey's voice reminded him of Doris Day. He said it was old-timey and gave the film a magical feeling.

In The Santa Clause 2, Tim Allen had to stay in character while around the child actors because some of them actually believed he was Santa. 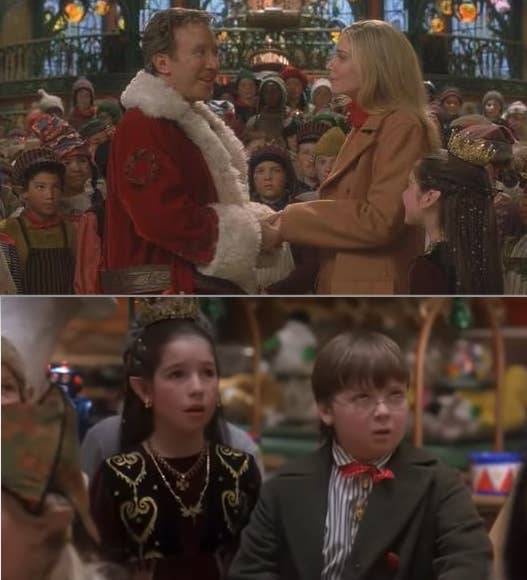 Tim Allen said that playing Santa around the child actors was a huge amount of responsibility: "I didn't want to disappoint them. I had to stay in character all the time, so I couldn't swear or get mad. The elves would gaze at me all day long and ask me ridiculous questions about Christmas."

In Love Actually, they originally shot four additional storylines, one of which included the school's headmistress and her partner, who was battling a terminal illness. 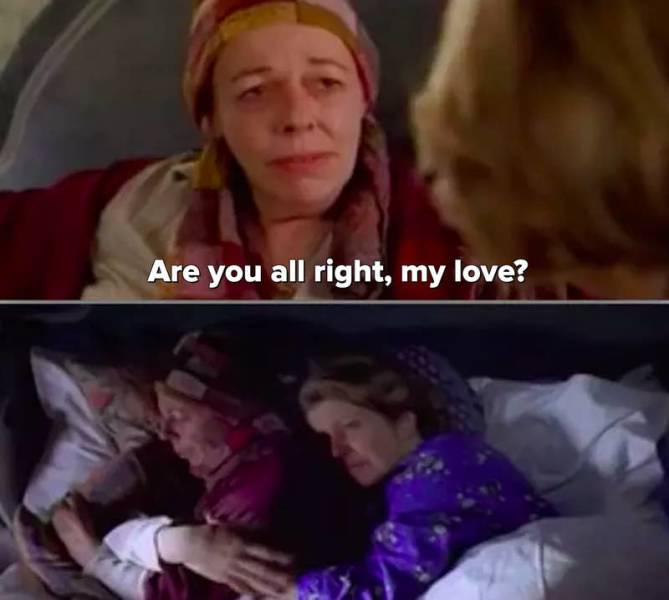 Writer-director Richard Curtis revealed in the DVD extras that the scenes ultimately had to be cut, but you can watch one of them here.

In A Christmas Story, Flick's tongue was actually suctioned by a hidden vacuum to give off the illusion that it was frozen to the pole. 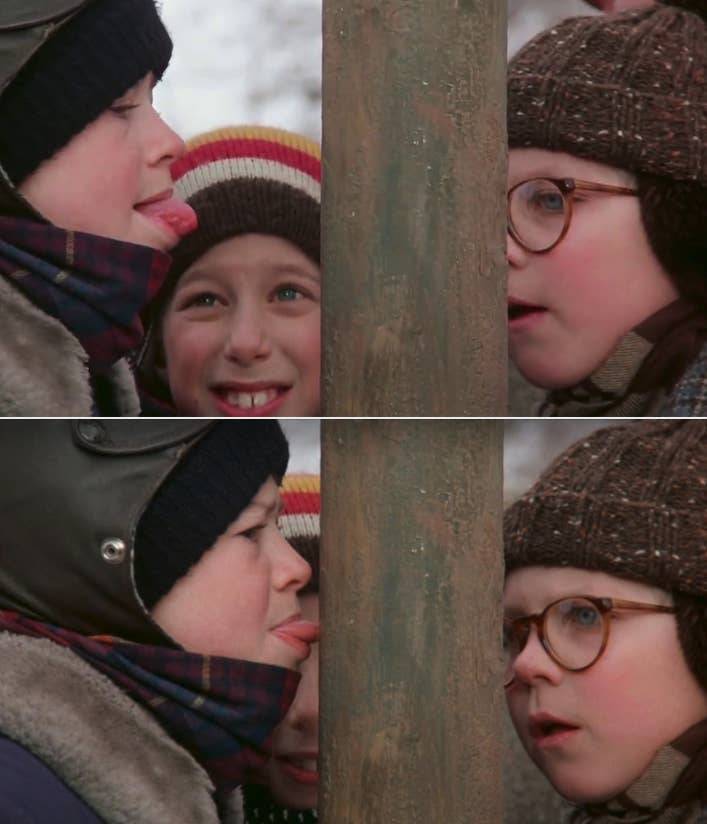 The actor who played Flick explained the whole thing, saying the set directors put a piece of plastic over the flagpole: "It had a little hole in it with a suction tube that went into the snow — you couldn’t see it. It was a little motor, like a small vacuum cleaner, [and] the hole-opening [in the plastic] was about the size of your pinky nail. So when you put your tongue there or finger or whatever, it just stuck."

In Elf, all of the elaborate Christmas decorations in the store took the art department weeks to build, so the fight between Buddy and the mall Santa had to be done in one take.

Artie Lange, who played the mall Santa, revealed in an interview that they "had one take to destroy it, so Favreau (the director) said 'just go nuts.'"

In How The Grinch Stole Christmas, Jim Carrey's Grinch suit was actually made of yak hair. 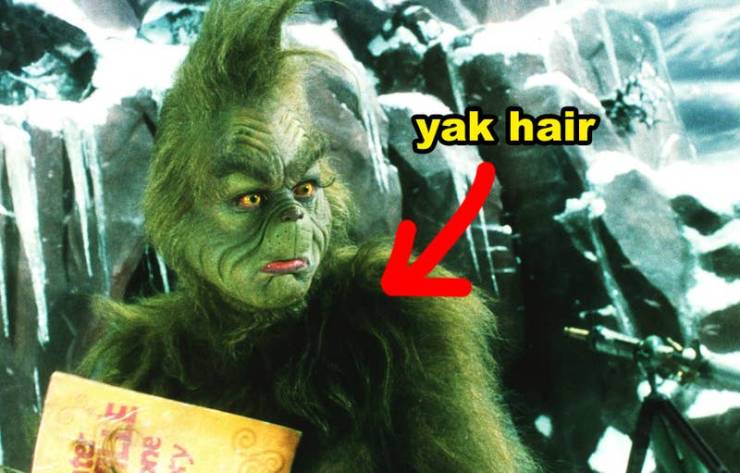 They dyed the yak hair green and then sewed it onto his spandex suit.

In Home Alone, the prop department originally created a fake tarantula to put on Daniel Stern's face, but the director made them use a real one (and its name was Barry!). 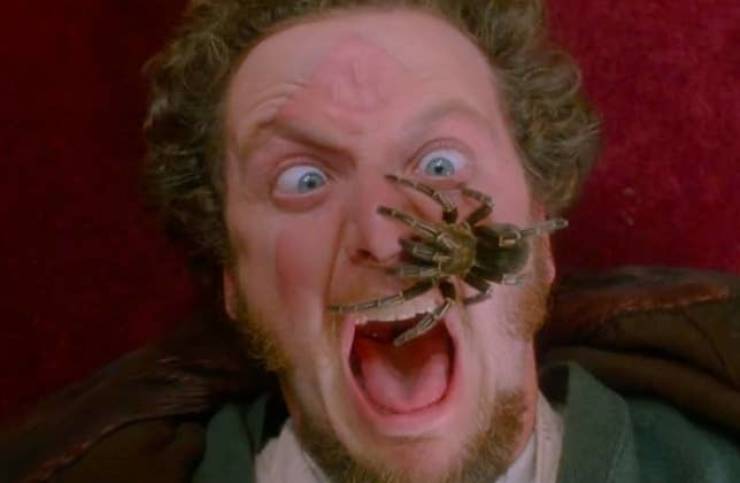 Also, there's a rumor that Daniel Stern mimed his scream during the scene, but that's not actually true! While prepping for the scene, the animal trainer on set said, "Just don't make any sudden, threatening moves, and you'll be fine.” Daniel responded, "But I’m going to be screaming in Barry's face. Do you think he'll feel threatened by that?!” The animal trainer simply said, "Barry doesn't have ears. He can't hear. Relax."

In It's a Wonderful Life, writer-director Frank Capra helped create a new type of artificial snow because the current movie method (using cornflakes that were painted white) was too noisy when the actors had to walk in scenes.

At the time, it was also popular to use asbestos as snow in films. But this new technique made filming a lot easier for Capra, rather than having to film the picture and audio separately and dub it in later. It also earned Russell Shearman and his team a special Technical Achievement Award at the Oscars.

In Die Hard, Bruce Willis' character spent most of the movie doing wild stunts (like stepping on glass) while barefoot, so he actually wore fake rubber feet. 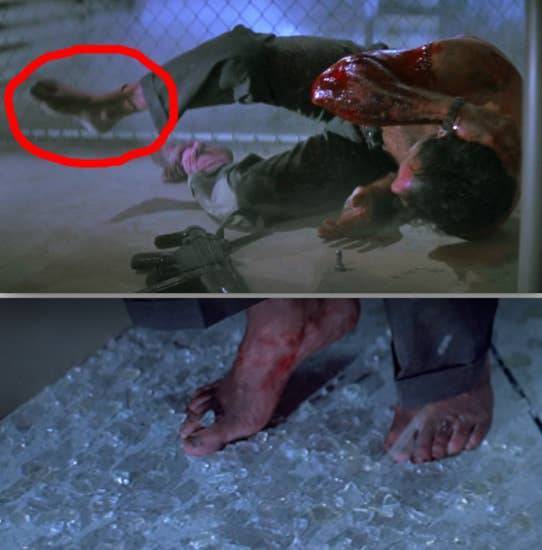 In The Polar Express, Tom Hanks and Josh Hutcherson did all the motion-capture work for the main character, while Daryl Sabara provided the voice. 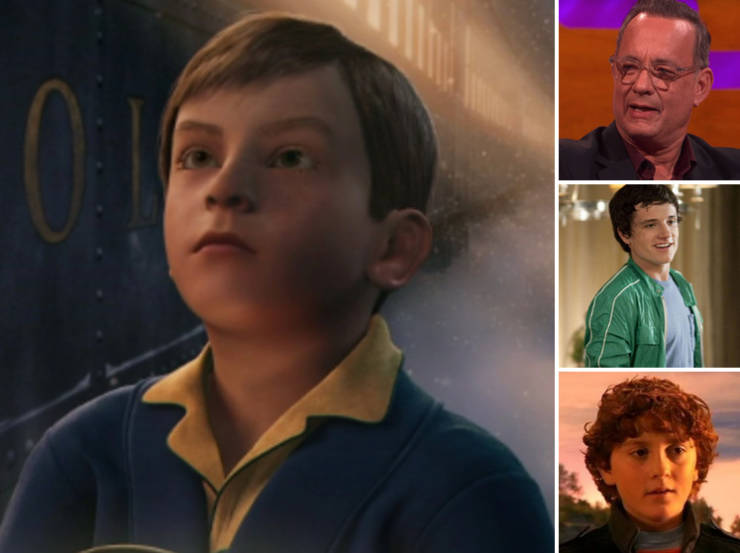 In How the Grinch Stole Christmas, both Eddie Murphy and Jack Nicholson were originally considered for the role of the Grinch. 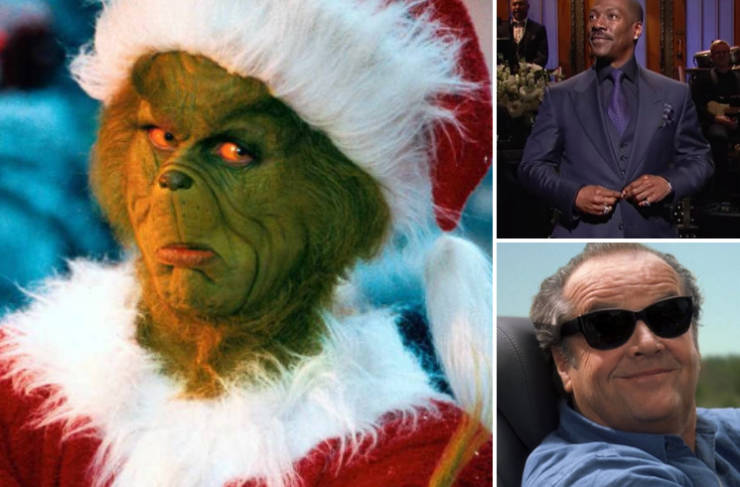 His grandson, Frank Capra III, was the second assistant director on the film.

In Miracle on 34th Street, the parade scenes were shot on location during the 1946 Macy's Thanksgiving Day Parade, which meant they only got one morning to film everything.

Maureen O'Hara wrote in her autobiography that Edmund Gwenn, who won an Oscar for playing Kris Kringle in the movie, actually played Santa in the 1946 Macy's Thanksgiving Day Parade, because that was the only way they'd be able to get the necessary shots for the movie.

In A Charlie Brown Christmas, one of the producers wasn't thrilled with a cut of the Christmas special and suggested that they add a laugh track, causing Charles M. Schulz to walk out of the room.

Schulz got his way, but apparently they created a version of A Charlie Brown Christmas with a laugh track as a backup, just in case the original didn't perform well, ratings-wise.

In Meet Me in St. Louis, Margaret O'Brien's mother would get her to cry on command while filming the sad scenes by telling her that her rival actor on the MGM lot was a better crier than her.

Vincente Minelli (Judy Garland's husband) wrote in his book that he got Margaret to cry by telling her that her dog died, but Margaret said that neither her mom nor Judy Garland would stand for that sort of thing.

Instead, she said: "The way they got me to cry is that June Allyson and I were in competition as the best criers on the MGM lot. So when I was having trouble crying, my mother would come over to me and say, 'I'll have the makeup man put the false tears down your face, but June is such a great, great actress — she always cries real tears. And then I started crying, because I couldn't let June win the competition.'"

In Jingle all the Way, the whole movie was actually inspired by the Cabbage Patch Kids craze from the Christmas season of 1983.

In Elf, none of the shots with Buddy at the North Pole involved CGI or special effects – it was all done with forced perspective. 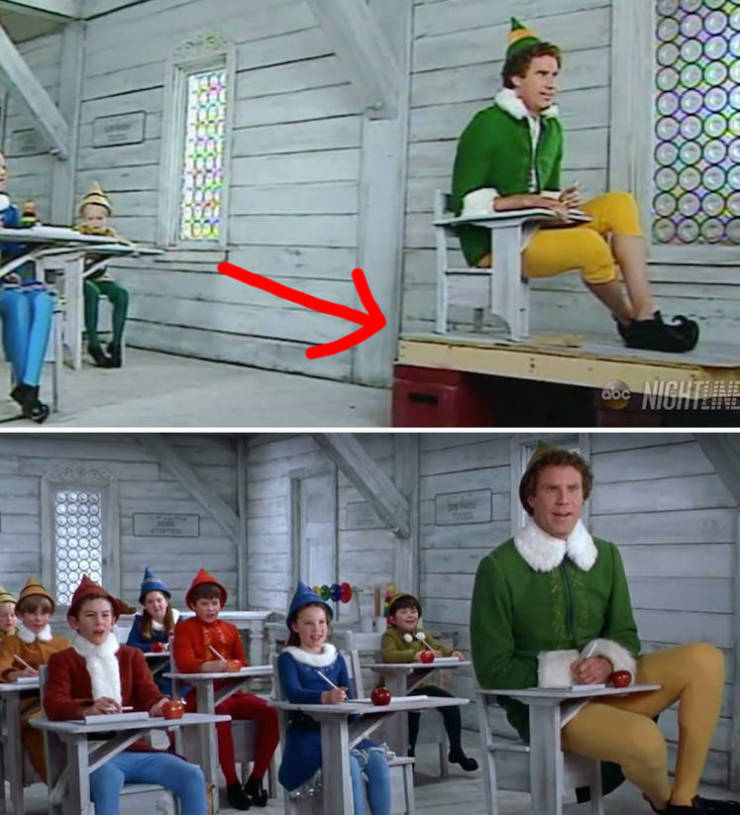 In Home Alone 2: Lost in New York, Donald Trump would only give the production team a permit to film in the Plaza Hotel (which he owned at the time) if they wrote him into the movie. 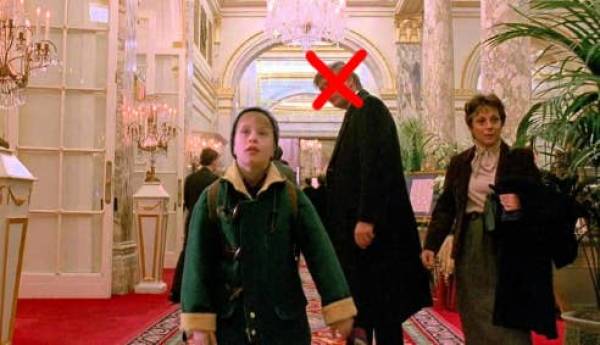 Matt Damon revealed that this was actually really common: "The deal was that if you wanted to shoot in one of his buildings, you had to write him in a part. Martin Brest had to write something in Scent of a Woman — and the whole crew was in on it. You have to waste an hour of your day with a [email protected]#t shot: Donald Trump walks in and Al Pacino’s like, "Hello, Mr. Trump!" — you had to call him by name — and then he exits. You waste a little time so that you can get the permit, and then you can cut the scene out. But I guess in Home Alone 2 they left it in."

In Miracle on 34th Street, actor John Payne, who played Fred Gailey, loved the movie so much that he actually wrote a sequel to the Christmas classic when he was older.

In Maureen O'Hara's autobiography, she said, "We talked about it for years, and he eventually even wrote a screenplay sequel. He was going to send it to me but tragically died before he could get around to it. I never saw it and have often wondered what happened to it."

In The Holiday, the website that Iris and Amanda used to swap houses is actually real.

But unfortunately you can't use the website to stay at Rosehill Cottage, as it was built specifically for the movie to save money.

In Four Christmases, the ticket agent was actually played by Peter Billingsley, aka Ming Ming from Elf and Ralphie from A Christmas Story. 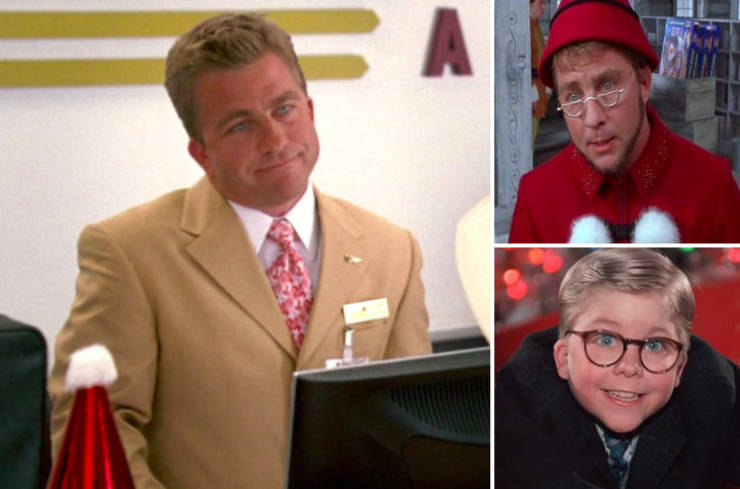 In How The Grinch Stole Christmas, Jim Carrey had to complete torture-endurance training from the CIA to help him get through the daily 8.5 hours of Grinch makeup.

Carrey said that the makeup took so long to put on that it felt like he was "being buried alive every single day." After the first day of shooting, he went back to his trailer, angrily kicked his leg through the wall, and told director Ron Howard he didn't want to do the movie anymore.

In Last Holiday, the deluxe hotel that Queen Latifah's character stays at, the Grandhotel Pupp, is a real-life hotel in the Czech Republic.

The Grandhotel Pupp was also featured in Casino Royale.

In It's a Wonderful Life, the whole holiday picture was actually shot in the summer of 1946, and it occasionally got so hot that production literally had to be shut down for a few days.

In Elf, Will Ferrell, Jon Favreau, and a single cameraman ran through New York on the final day of shooting and interacted with random people on the streets to film the "Buddy discovers New York" montage. 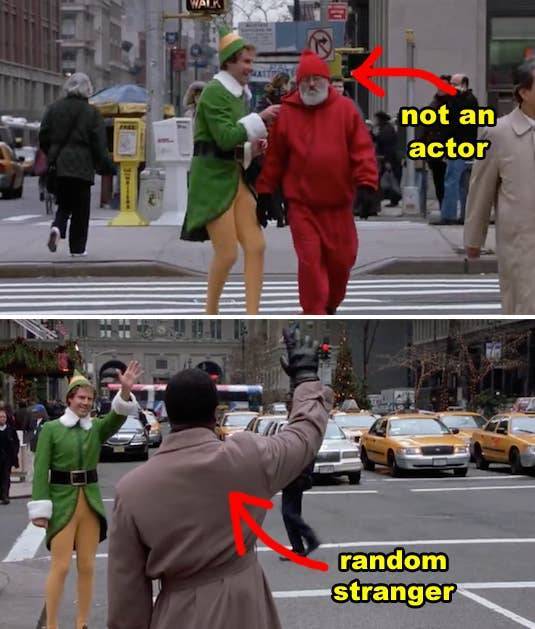 In Love Actually, Emma Thompson wore a fat suit throughout the whole film. 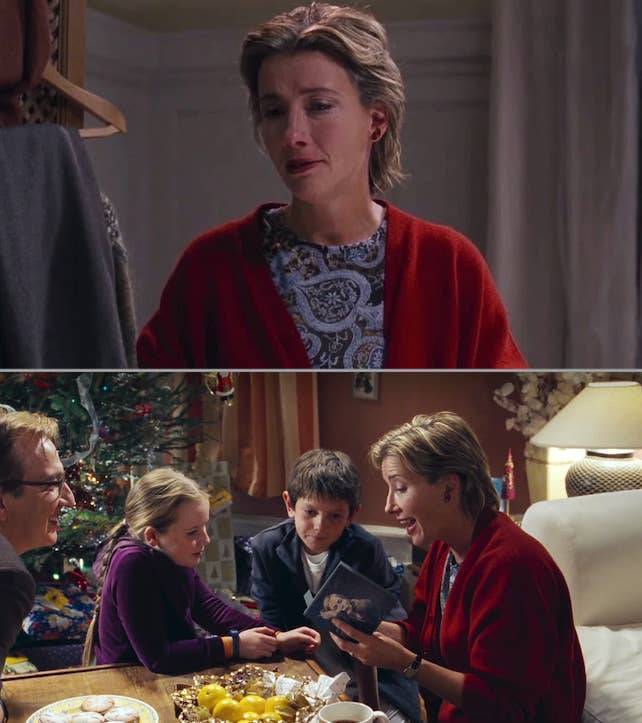 Emma Thompson admitted this a few years ago, saying, "Oh, and I wore a fat suit for Love Actually – and I knew just how to play that part [of a wife who has stumbled across evidence of what might be her husband’s infidelity]. I’ve had so much bloody practice at crying in a bedroom and then having to go out and be cheerful, gathering up the pieces of my heart, and putting them in a drawer.”

In Home Alone, the picture of Buzz's girlfriend was actually of a boy wearing a wig. 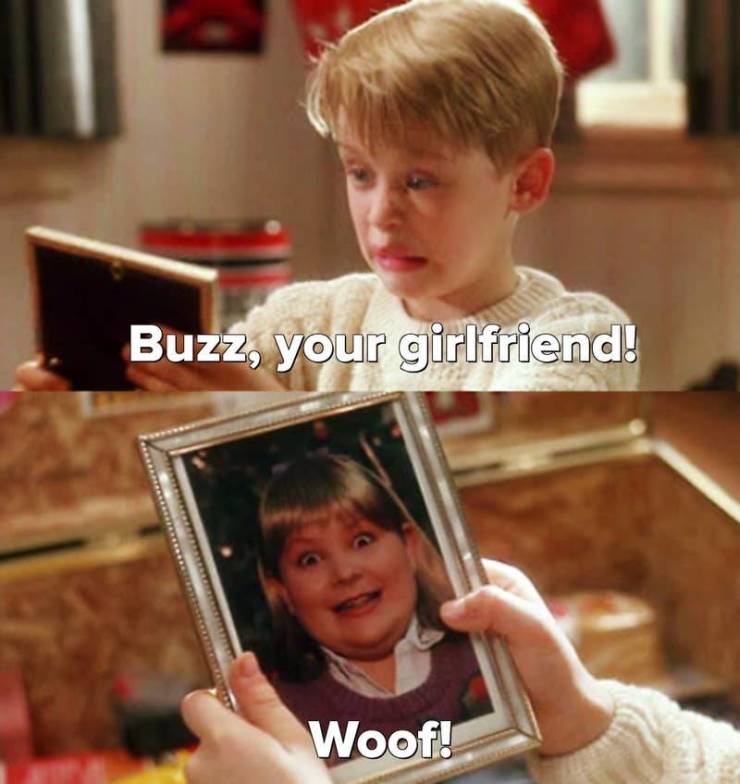 Devin Ratray, the actor who played Buzz, admitted that the girl in the picture was actually the son of the movie's art director: "[They] decided it would be unkind to put a girl in that role of just being funny-looking. The art director had a son who was more than willing to volunteer for the part. I think if he had known it would become the highest-grossing family comedy of all time, he might have had second thoughts about it."

And in The Santa Clause, Disney had a strict policy against hiring ex-cons, but Tim Allen, who was arrested in 1978 for the possession of nearly 1.5 pounds of cocaine, was given an exception. 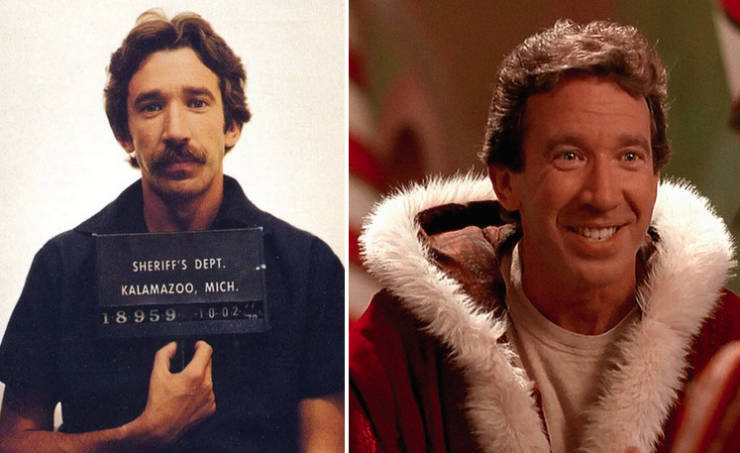