“Wildlife Photographer Of The Year” Announced Their People’s Choice Award Finalists, And They Are Fantastic! (24 pics) 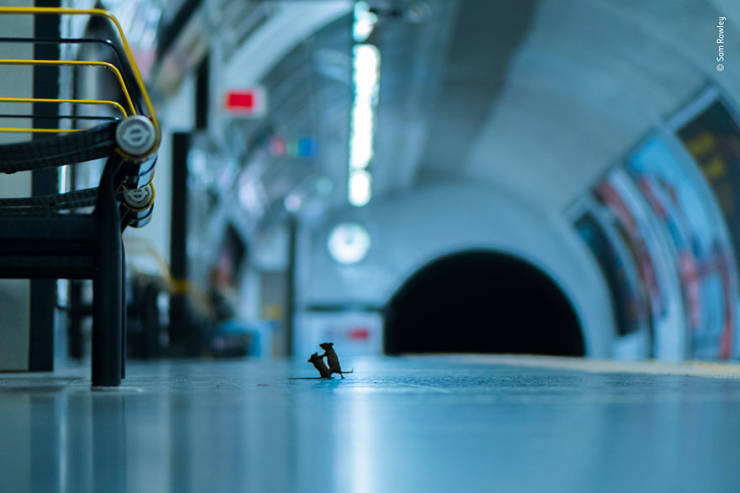 Sam discovered the best way to photograph the mice inhabiting London’s Underground was to lie on the platform and wait. He only saw them fight over scraps of food dropped by passengers a few times, possibly because it is so abundant. This fight lasted a split second, before one grabbed a crumb and they went their separate ways. 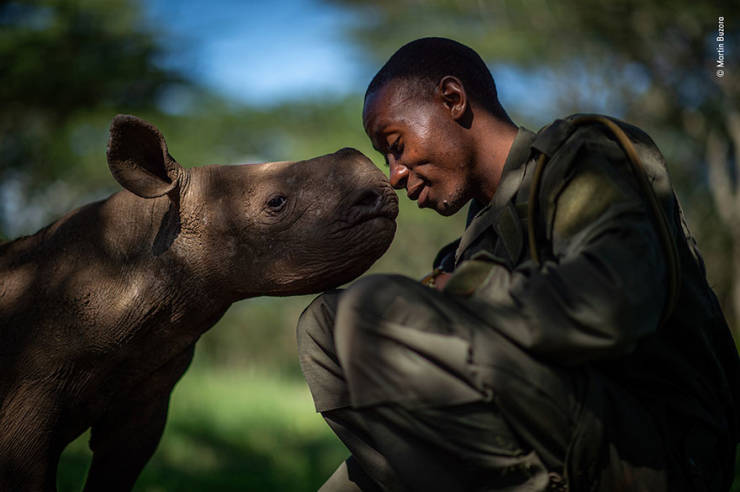 Elias Mugambi is a ranger at Lewa Wildlife Conservancy in northern Kenya. He often spends weeks away from his family caring for orphaned black rhinos like Kitui here. The young rhinos are in the sanctuary as a result of poaching or because their mothers are blind and cannot care for them safely in the wild. 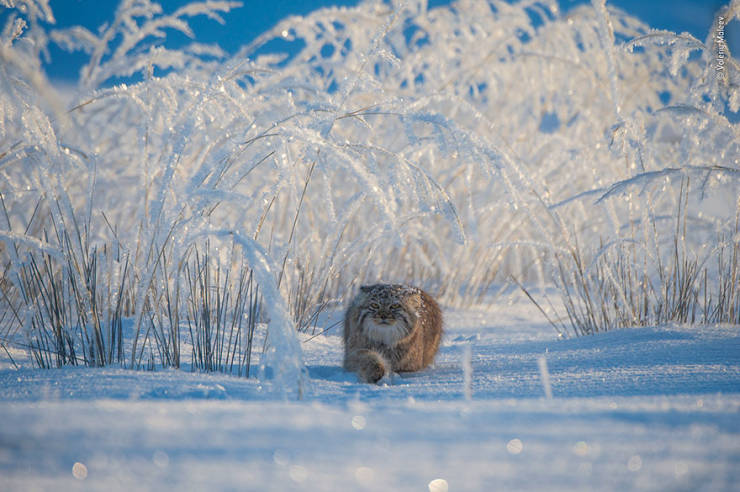 Valeriy encountered this Pallas’s cat while it was out hunting in the Mongolian grasslands – it was -42°C (-44°F) on that frosty day, but the fairy tale scene cancelled out the cold. Pallas's cats are no bigger than a domestic cat and they stalk small rodents, birds and occasionally insects. 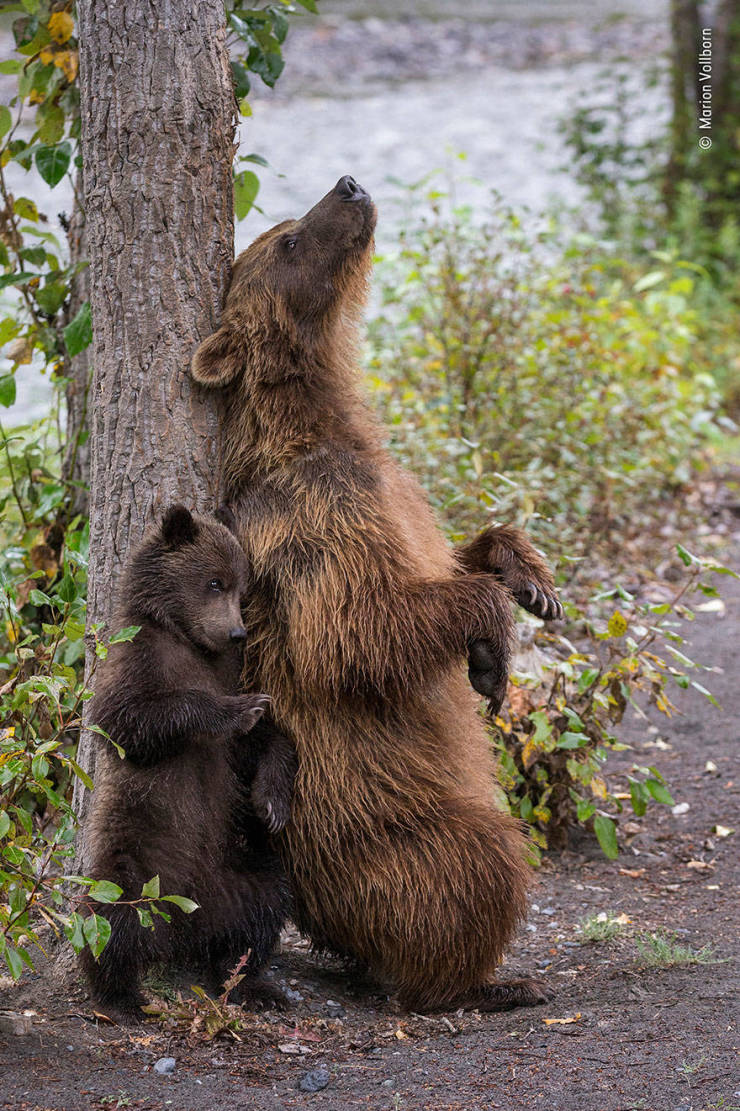 While on a bear watching trip to the Nakina River in British Columbia, Canada Marion spotted a grizzly bear and her young cub approach a tree. The mother bear started to rub against the tree trunk and was followed shortly by the cub, imitating its mother. 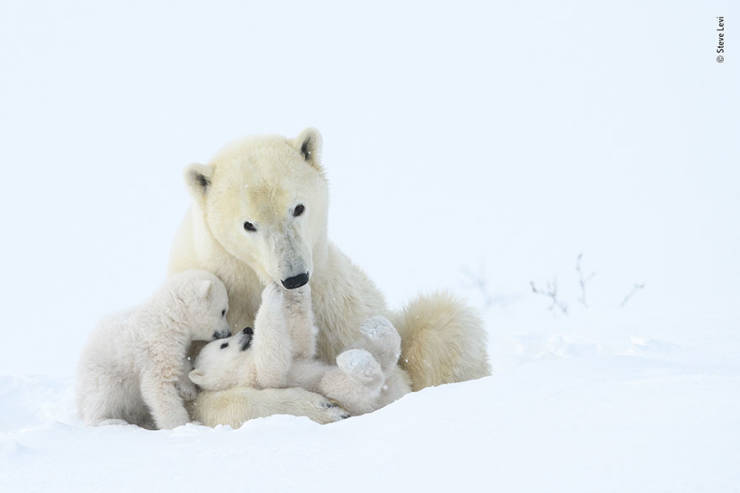 It was early March and Steve spotted this mother polar bear and her two cubs after 10 days of looking. They had recently left their birthing den in Wapusk National Park, Canada, to begin the long journey to the sea ice so their mother could feed. After a nap the cubs were in a playful mood. 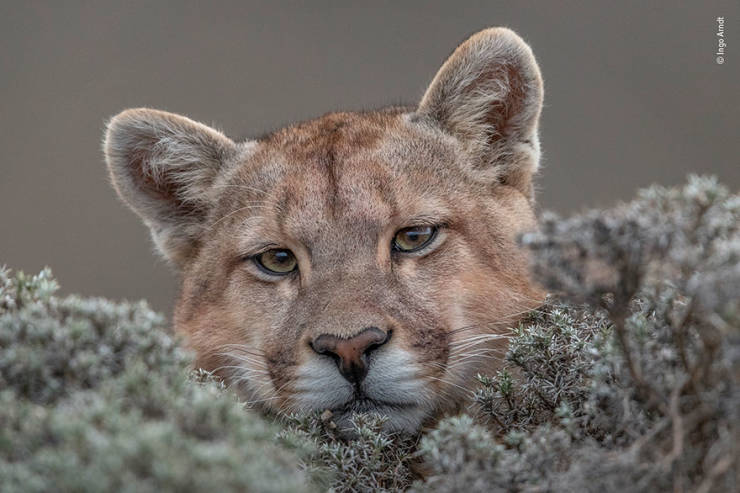 For over two years Ingo has followed the pumas of Torres del Paine National Park, in Patagonia, Chile. This female was so used to his presence that one day she fell asleep nearby. On wakening, she glanced at him in a familiar way, and he was able to capture this portrait of a completely relaxed puma.

"What A Poser", Clement Mwangi, Kenya 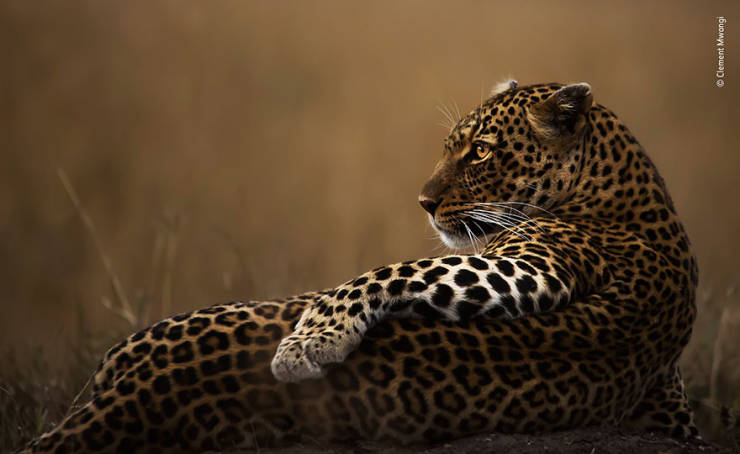 In Kenya’s Maasai Mara National Reserve, Clement spent time observing this beautiful leopard as she soaked up the last warm rays of the setting sun. Clement is mindful to remember to take pleasure in life’s simple moments – being all too aware that sometimes, as a wildlife photographer, you can miss the exceptional while looking for the unusual. 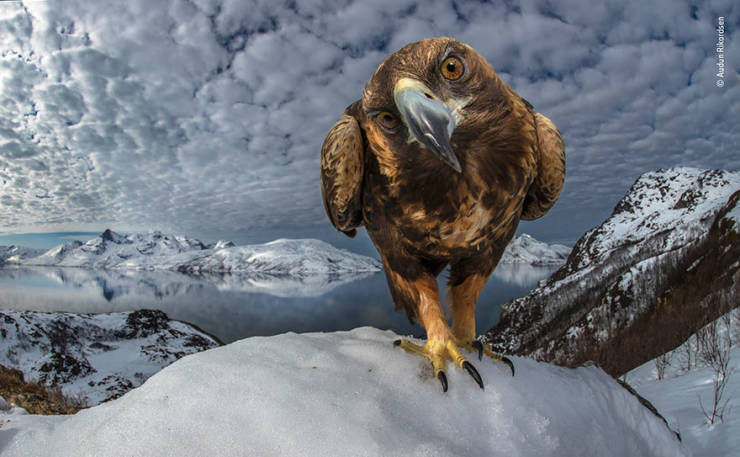 From a hide on the coast of northern Norway, it took Audun three years of planning to capture this majestic bird of prey in its coastal environment. After some time, the golden eagle became curious of the camera and seemed to like being in the spotlight. 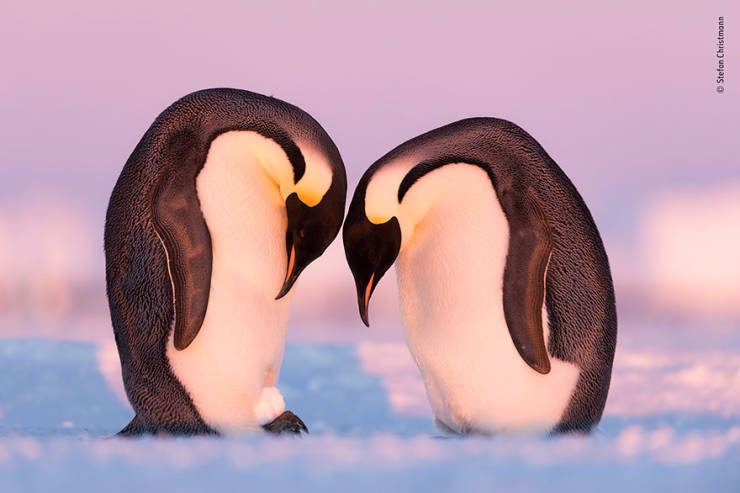 When Stefan came across this penguin couple in Atka Bay, Antarctica, seemingly with an egg, he was surprised as it was too early in the season for egg-laying. Upon closer inspection he discovered the egg was a snowball! Perhaps the diligent couple were practicing egg transfer in preparation for when their real egg arrived. This is possibly the first time it has ever been witnessed and documented. 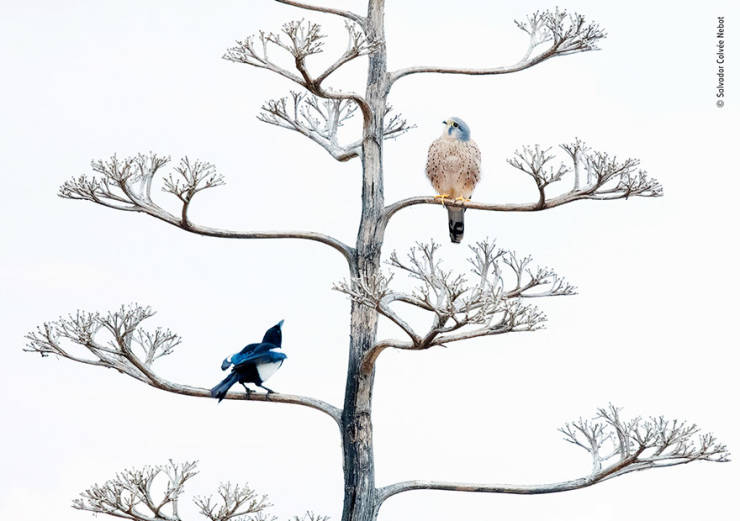 Over several months, Salvador watched different species of bird use the dead flower spike of this agave in Valencia, Spain as a perch before descending to a small pond to drink. A pair of common kestrels were frequent visitors though each time they came magpies would hassle them. 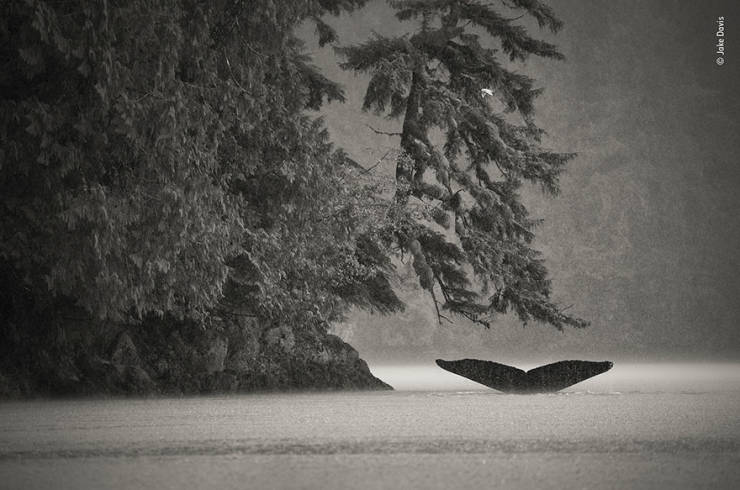 Jake was on a boat off the coast of Great Bear Rainforest, British Columbia, Canada where he watched humpback whales bubble-net feeding. Here the lead whale dives to locate the fish, once the fish are located, the rest of the pod swim in decreasing circles while blowing bubbles which create a net, trapping the fish. 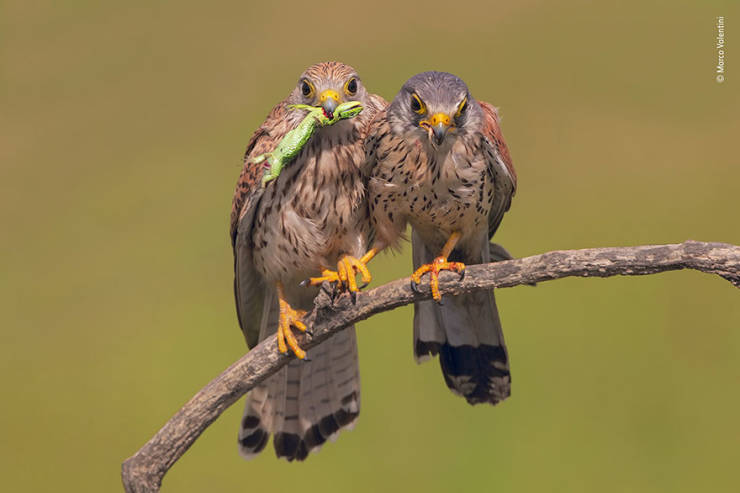 Marco was in Hortobágyi National Park, Hungary when he spotted these kestrels displaying typical courtship behaviour. Here the female has just received an offering of a young green lizard from her suitor and in this touching moment she tenderly took hold of his claw. 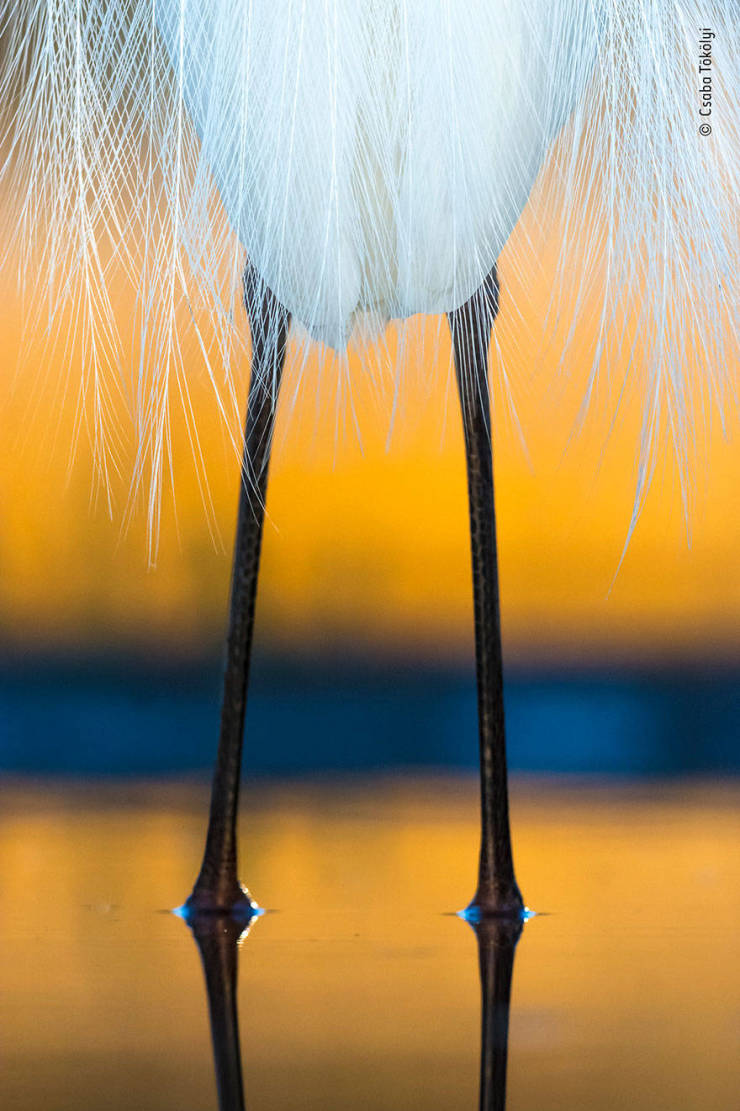 Csaba had been in a hide all night photographing nocturnal species and their activities, but as the golden light of dawn reflected on the surface of the water, an egret in wonderful breeding plumage stopped close by. The elongated scapular feathers covered the bird as if it was wearing a gown. 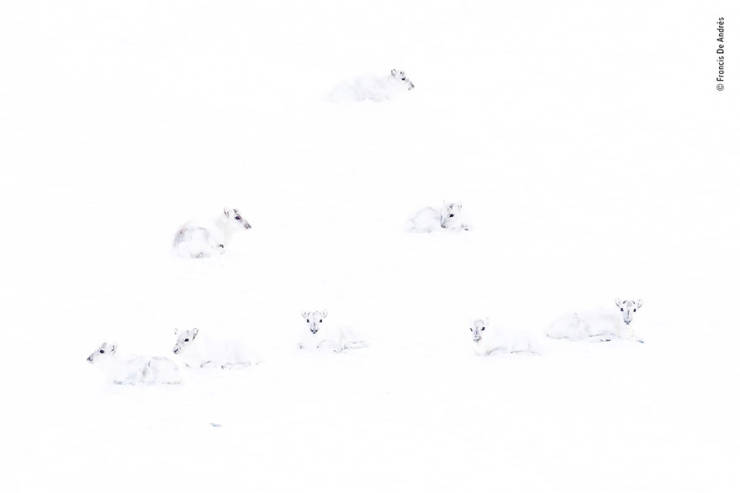 The conditions for photographing at the Norwegian archipelago Svalbard are extreme, but wildlife has adapted to the environment and its freezing temperatures. Francis found this composition of white arctic reindeer, which were observing him, both curious and charming. 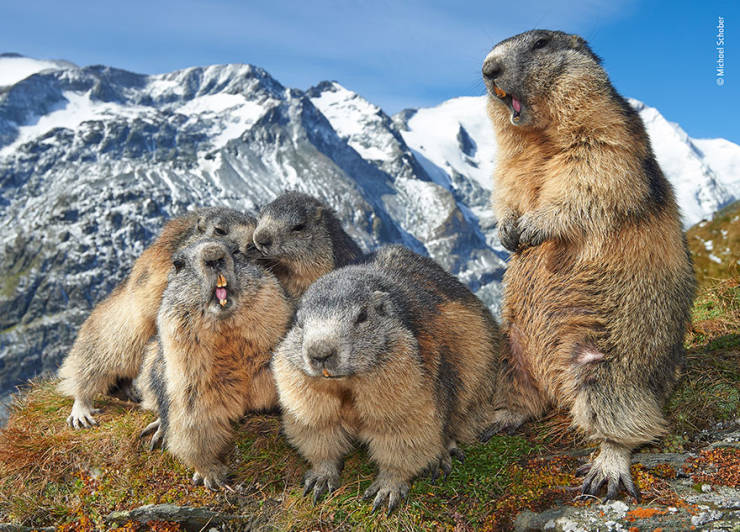 Marmots have become accustomed to the presence of humans in Hohe Tauern National Park, Austria and allow people to observe and photograph them at close range. This behaviour is beneficial for the marmots, as human company deters predators such as golden eagles. 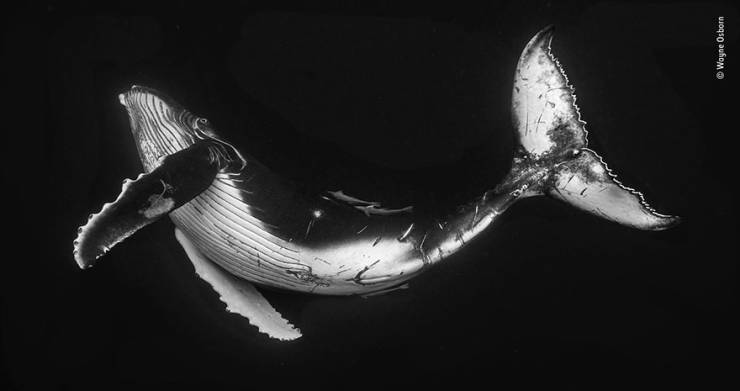 Wayne spotted this male humpback calf and its mother while diving off the Vava'u Island group in the Kingdom of Tonga. The calf kept a curious eye on Wayne as it twisted and turned before returning to its mother periodically to suckle. She was relaxed and motionless 20 metres (65 feet) below. 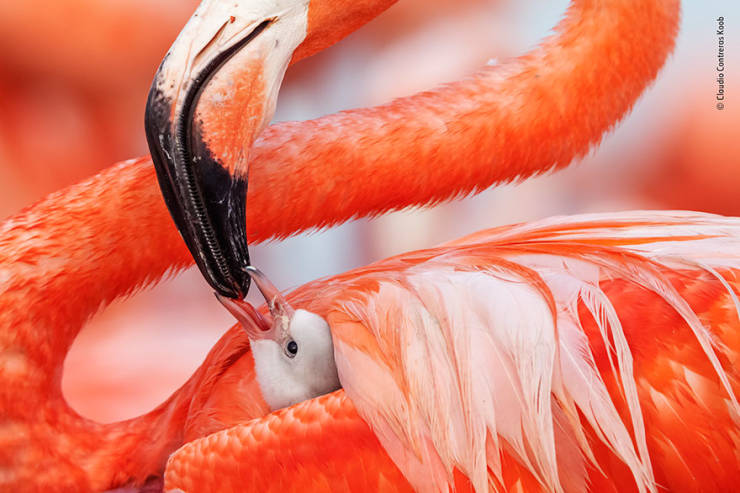 Ría Lagartos Biosphere Reserve in the state of Yucatán is home to Mexico's largest flock of Caribbean flamingos. This chick is less than five days old – it will stay in its nest less than a week before it joins a crèche of other youngsters who wander around the colony searching for food. 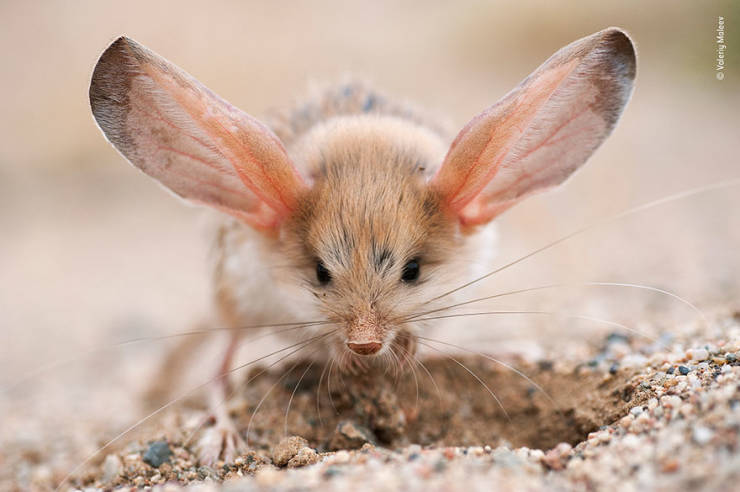 Valeriy was on a summer expedition to the Mongolian part of the Gobi Desert when he happened upon a long-eared jerboa. As blood moves through the ears of these usually nocturnal animals, excess heat dissipates across the skin and so the jerboa is able to stay cool. 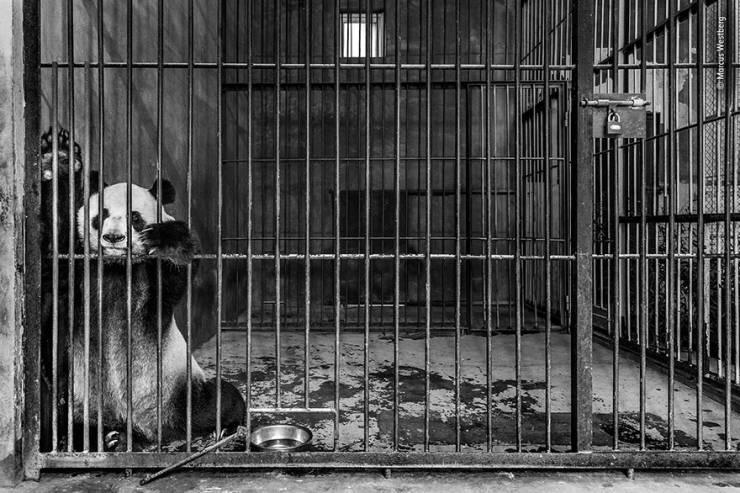 A giant panda sits in its cage in a breeding centre in Shaanxi, China. With a growing wild population and no realistic plan of how to breed and raise pandas for rerelease into the wild rather than a life in captivity – not to mention lack of habitat being the largest barrier to the continued spread of the wild population – it is unclear how such centres will benefit the species. 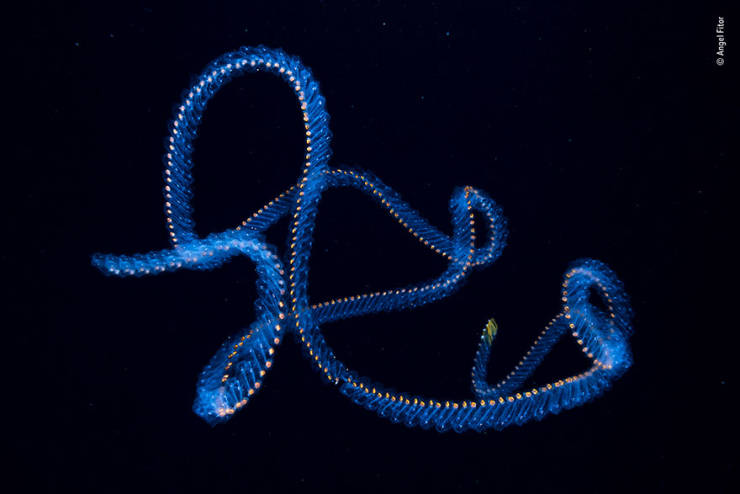 Angel took this image in the waters off of Alicante, Spain. Immersed in a strong current, an otherwise slightly undulating salp chain twists and turns forming whimsical shapes. Salps move by contracting, which pumps water through their gelatinous bodies. 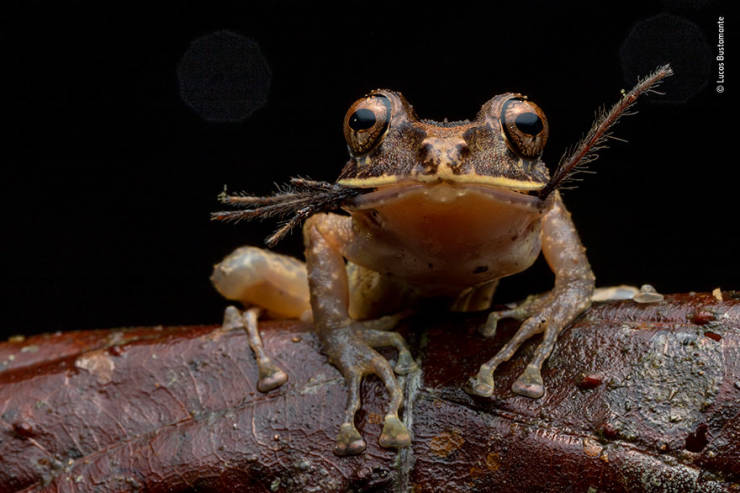 Night hikes through the Ecuadorian jungle are one of Lucas’ favourite activities. With a keen interest in herpetology, he was overjoyed to spot this labiated rainfrog which are abundant in the region. It had just caught a baby tarantula and its comical expression said ‘caught in the act!’ 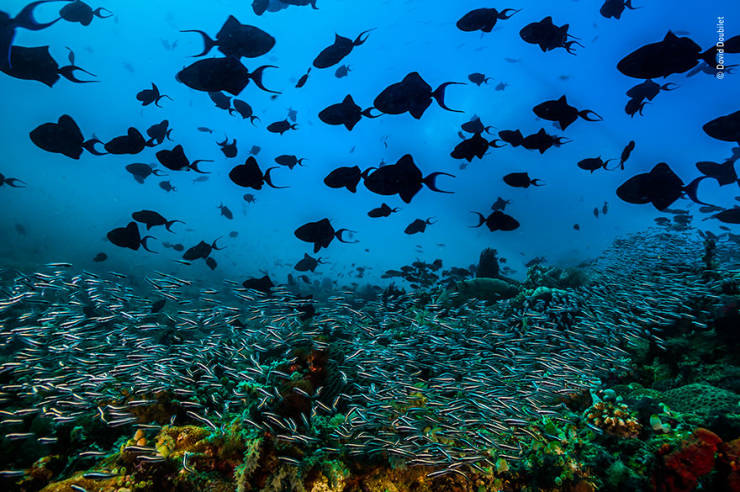 A school of red tooth triggerfish form a cloud of silhouettes above a river of convict blennies flowing over the coral in Verde Island Passage, Philippines. The Passage, a strait that separates the islands of Luzon and Mindoro, is one of the most productive marine ecosystems in the world. 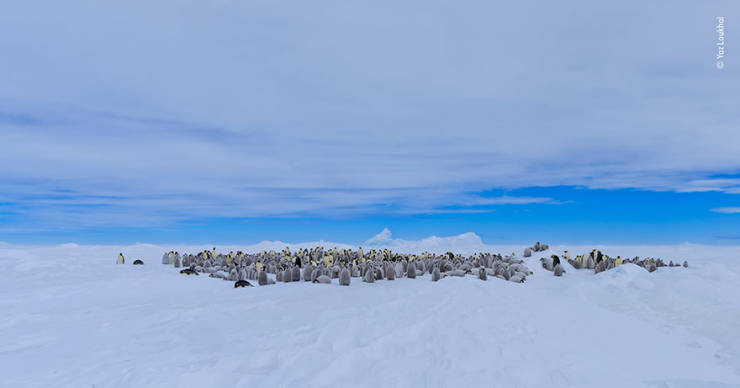 After a rough journey by sea to the remote Snow Hill Island off the east coast of the Antarctic Peninsula, Yaz flew by helicopter and then trekked through thick snow to reach the emperor penguin colony. His efforts were rewarded with this incredible view of the whole colony. 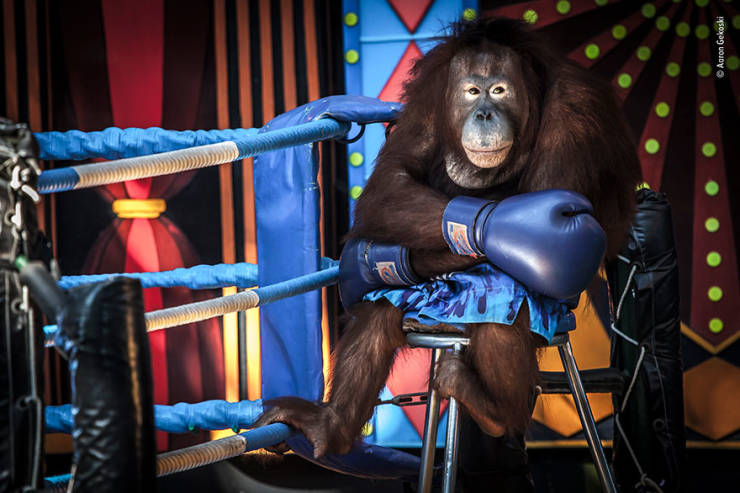 Orangutans have been used in degrading performances at Safari World, Bangkok – and many other locations – for decades. The shows were temporarily stopped in 2004 due to international pressure, but today the shows continue – twice a day, every day – with hundreds of people paying to watch the orangutans box, dance, play the drums and more.