Sydney Ferbrache travels over America with her doggo Ella 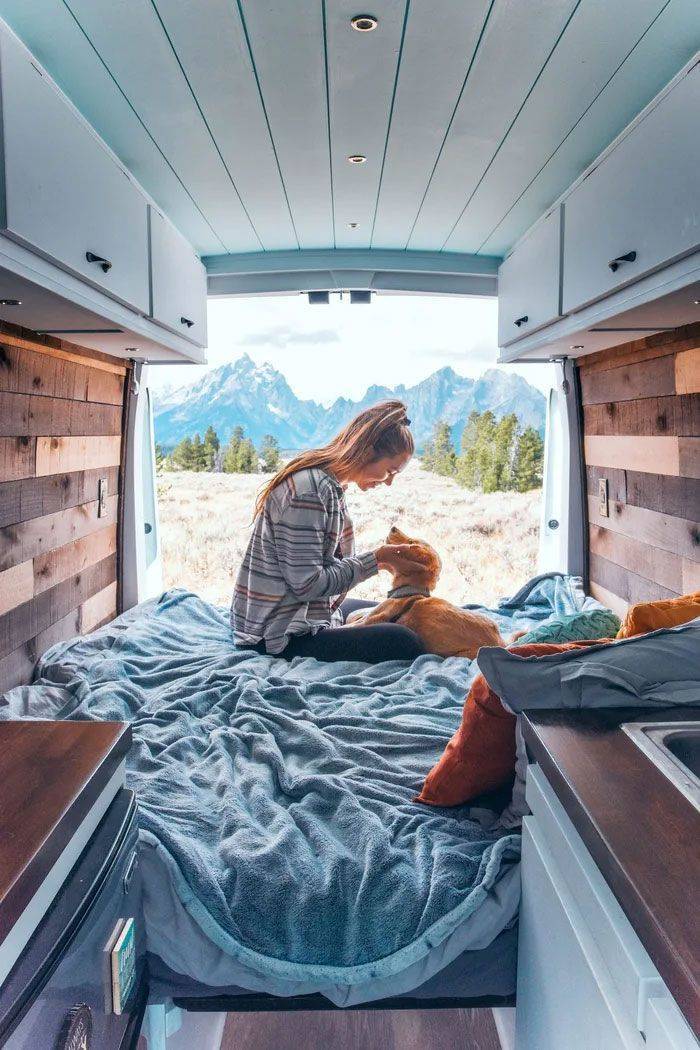 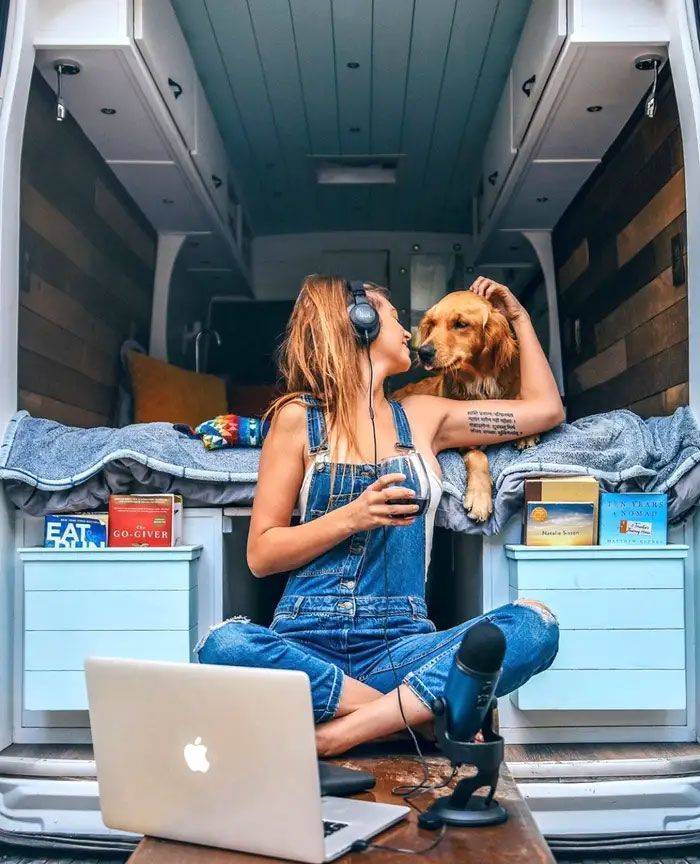 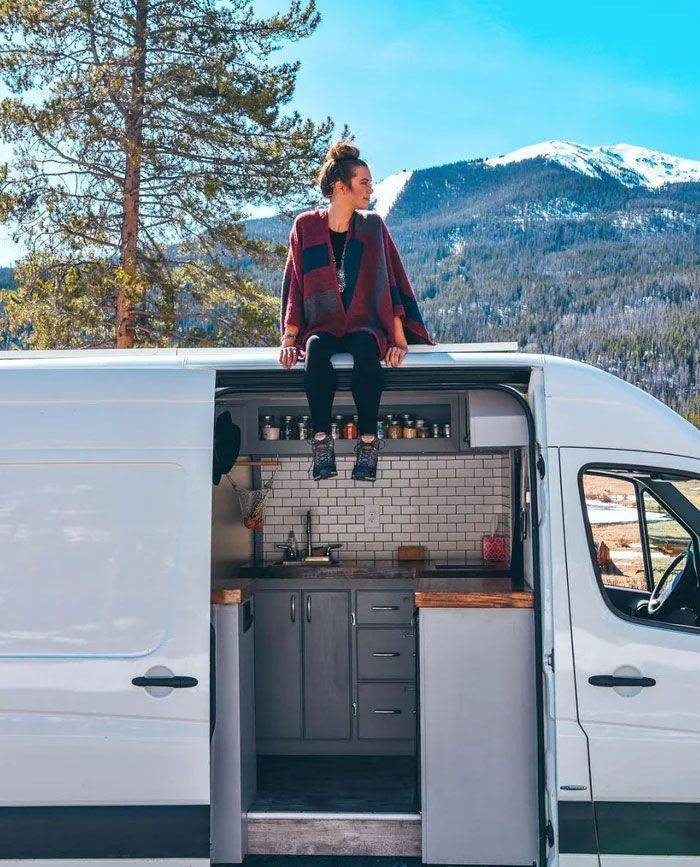 “You would never guess that there so many interesting backgrounds in our very own country. My biggest challenge has probably been big life things happening and not having my family with me for them. I got into a car crash and my van was in the shop for a couple of weeks. So I was literally homeless and had to stay in really cheap motels that allowed dogs. My first little one Ella has surgery when she was just 4 months old and I had no one to help me through that either. My family does what they can from Indiana but sometimes a hug is really what’s needed.”

The pair have visited more than 20 states 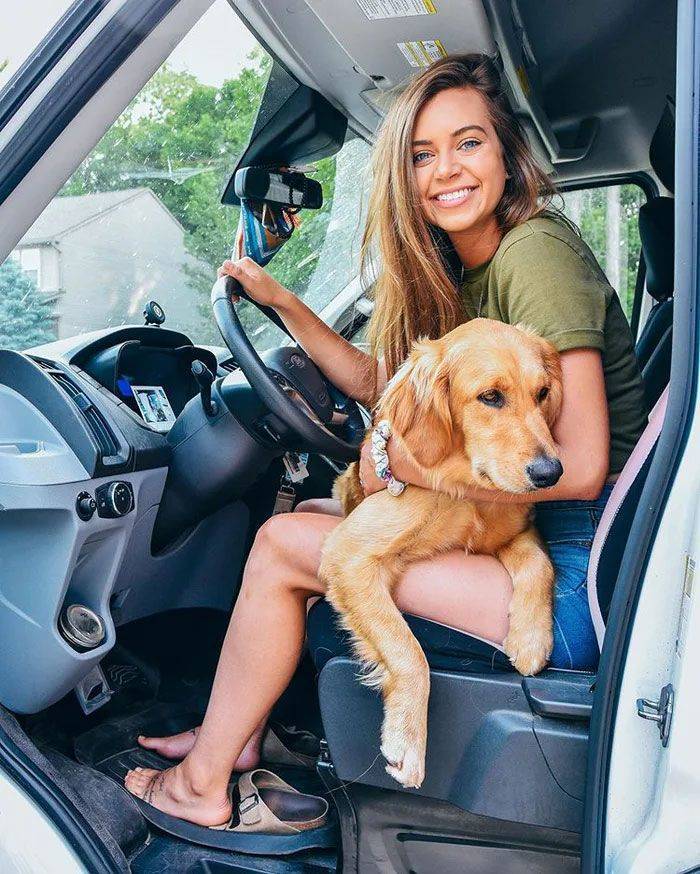 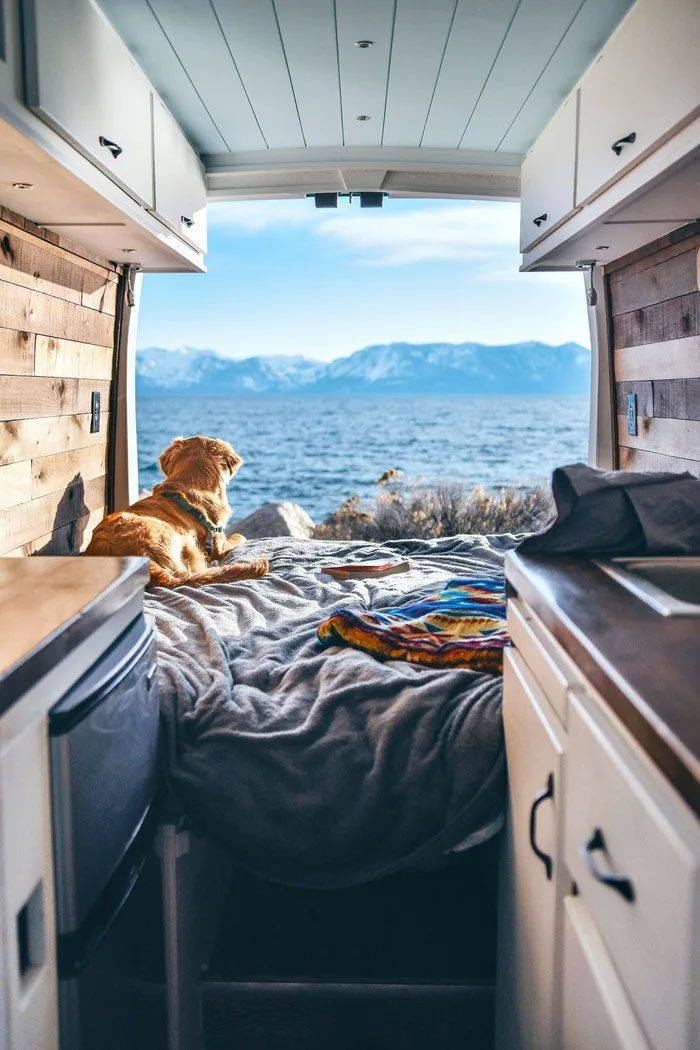 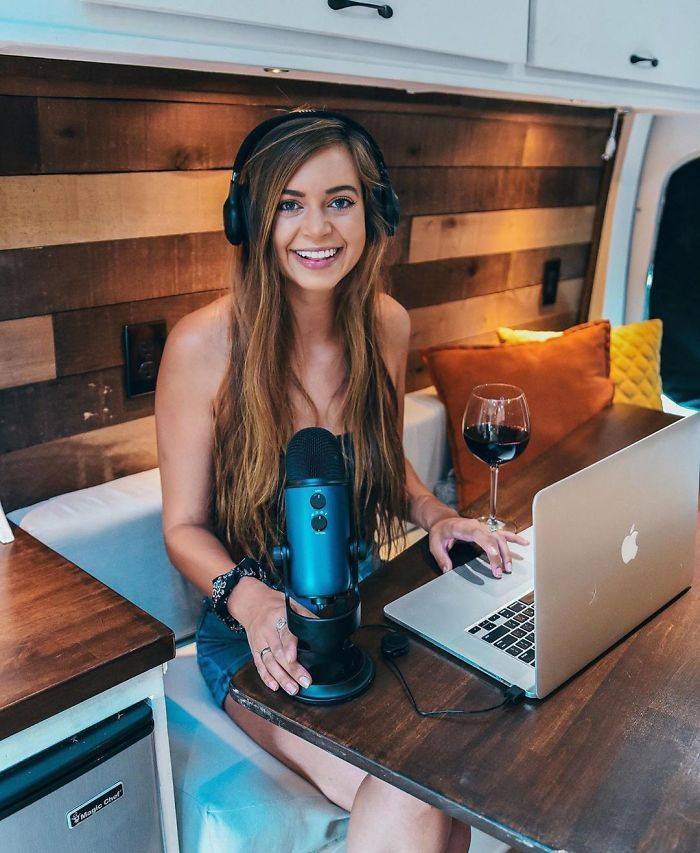 Sydney said that she has been “extremely lucky” with the internet’s reaction. “I haven’t gotten too much ‘hate’ or negativity. I try really hard not to read too many comments on Facebook or YouTube because that’s where trolls can really come out. I like my people and family on Instagram because they support what I do and surround me with positivity instead of the negative stuff. I know it’s out there! Out of sight out of mind though.”

Sydney started traveling by herself after dumping her boyfriend 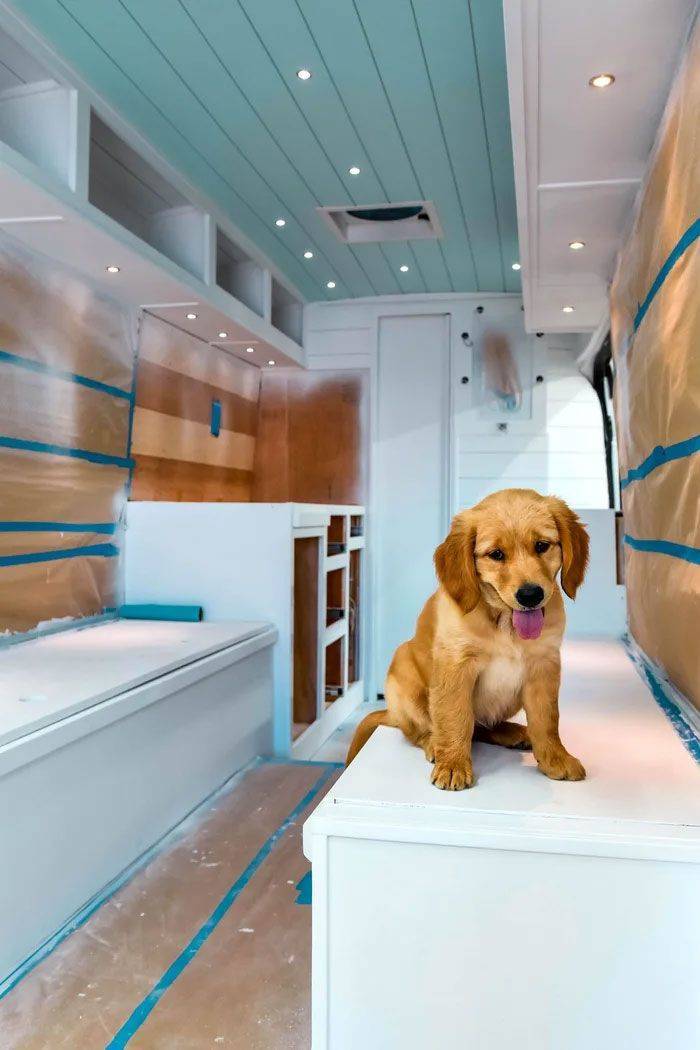 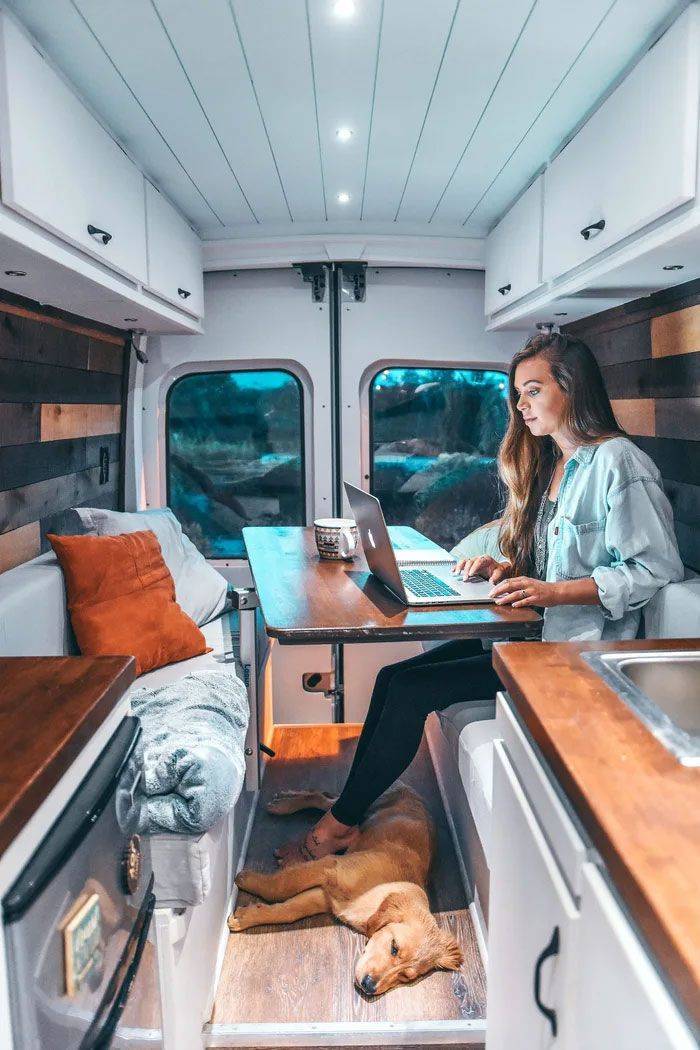 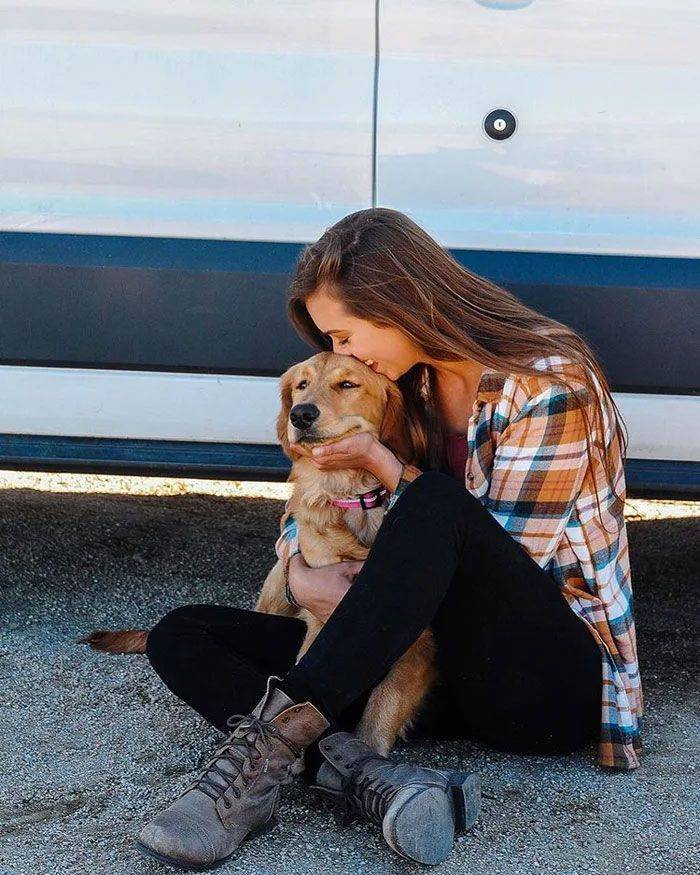 “I actually do respond to critics whenever I do catch a comment. I like explaining myself and seeing someone change their opinion. It doesn’t always work but at least at that point, I tried. So I explain my story or my side and walk away from it knowing I did what I can.” 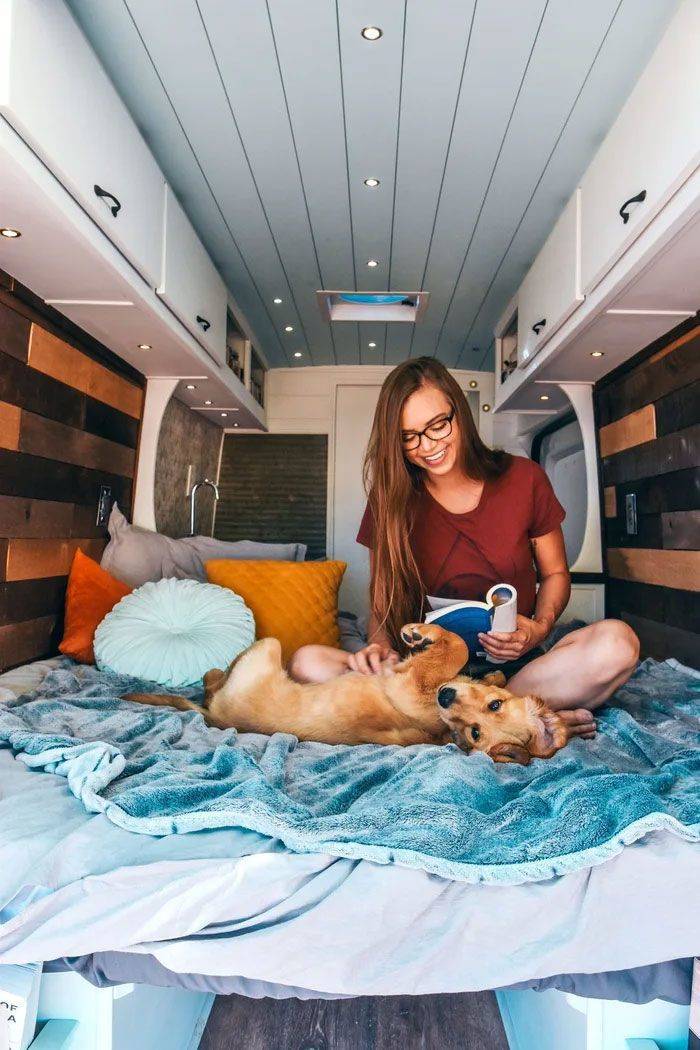 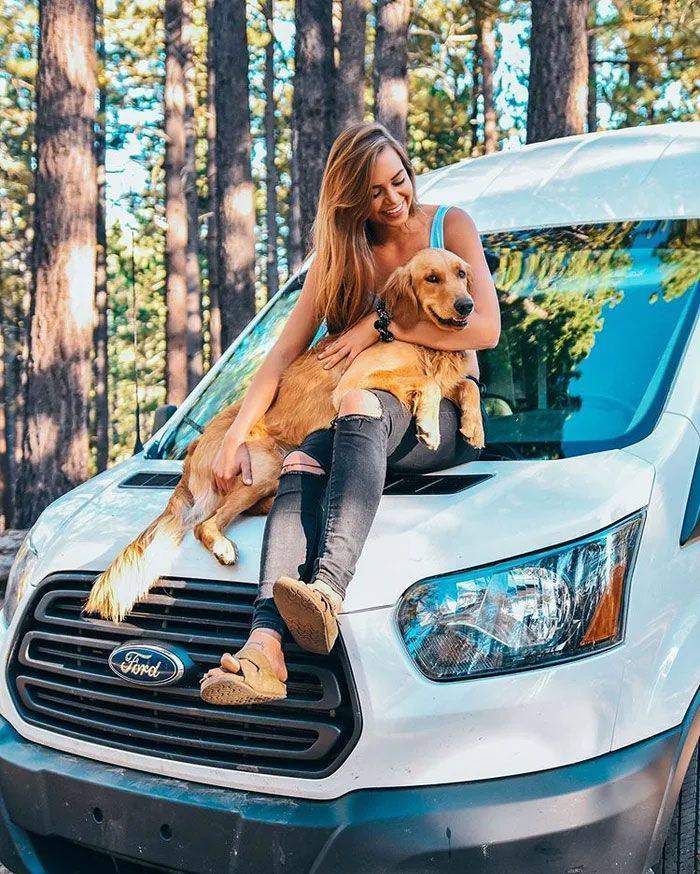 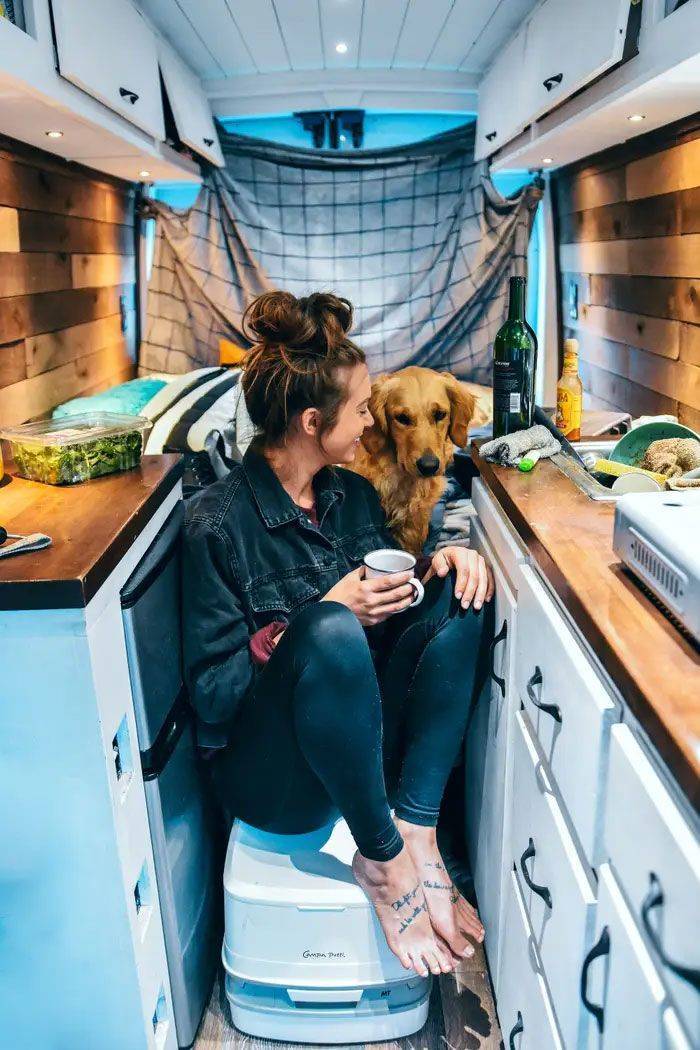 Sydney explained that everyone is capable of going on an adventure. “You don’t need a ton of money. You can do it with kids. You can do it no matter what your circumstances!”

“It might take a little time to get things figured out and save up the money you can. But don’t write it off completely. You are fully capable and I am here to help you get there if needed. Once you hit the road, nothing else matter besides the future you now have exploring a new adventure.” 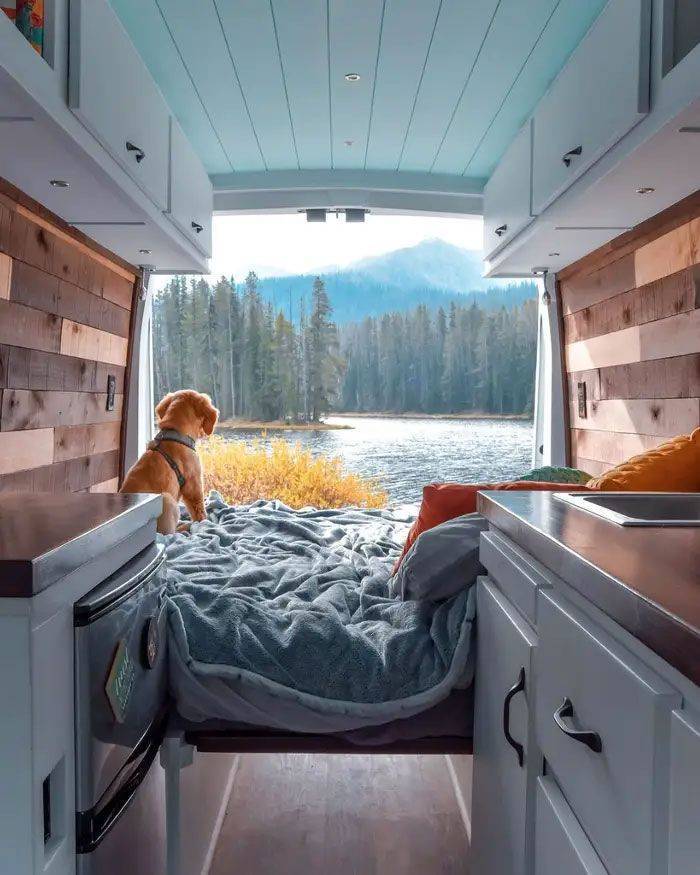 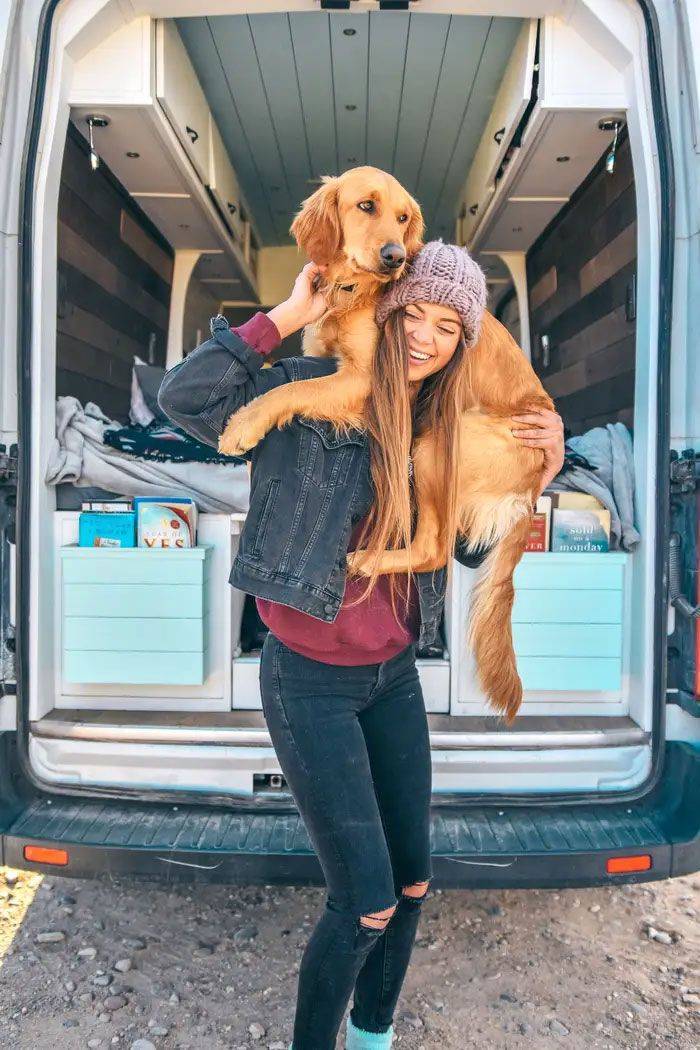 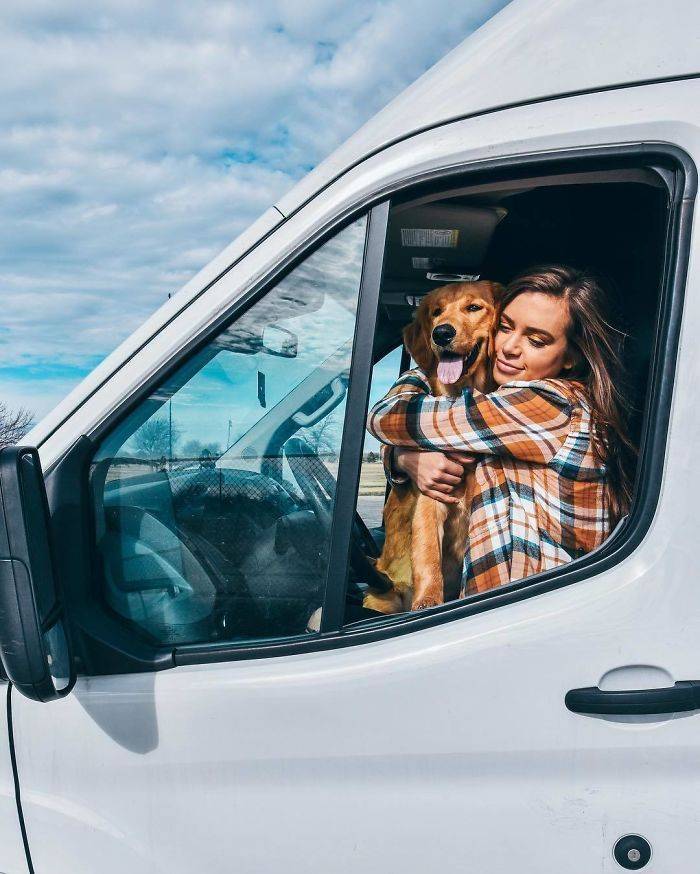 Having dumped her boyfriend, the woman from Indianapolis, Indiana wanted to prove to the world that it’s possible for a woman to travel on the road alone. Well, not completely alone—she travels with her pup, Ella, who has her very own Instagram as well.

Sydney’s first contact with solo-adventuring started with traveling outside of the US, to South Africa. “I said screw it, I’m doing it on my own. I did a ton of research on safety and women in South Africa and I backpacked around Cape Town and Johannesburg for three-and-a-half weeks,” she told Insider. 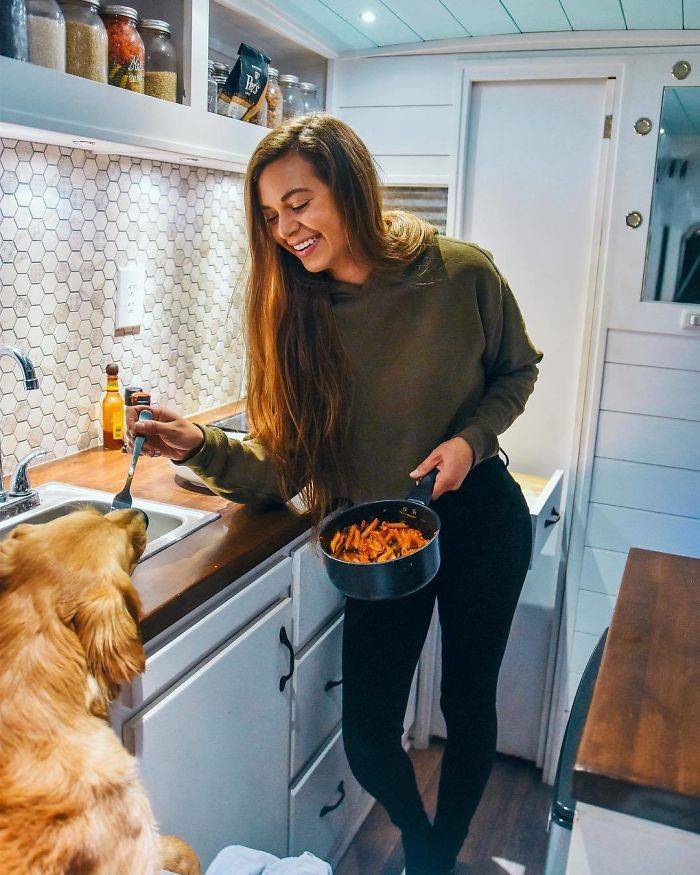 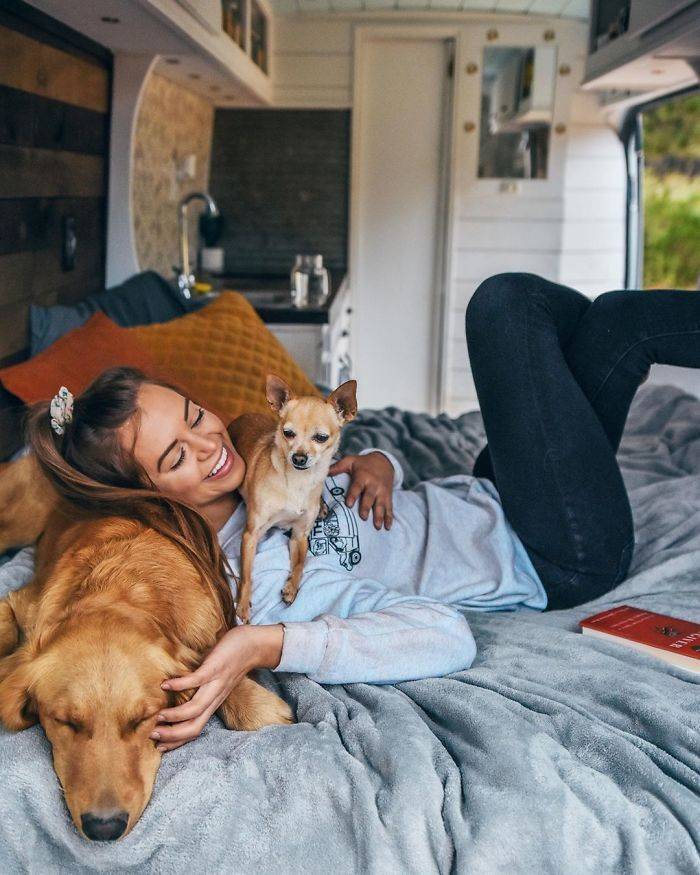 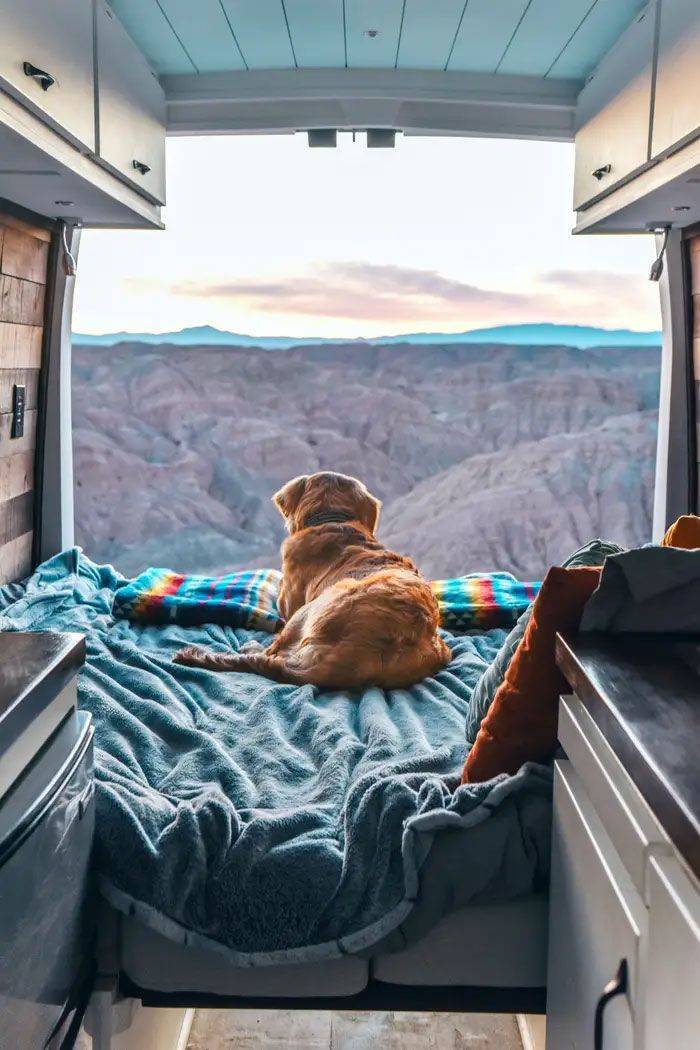 “My parents were petrified the whole time I was there. Everyone was so apprehensive about it. But I knew I would be okay. And when I got home I said, ‘I’m totally capable of doing anything.’ That was my first trip alone, and it really changed my life.”

She then set out on the road with her then-boyfriend of just over a year after buying a Mercedes-Benz Sprinter van for $18,000 dollars, and renovating it for another $10,000 dollars. That was back in September 2017. However, she soon dumped him because they weren’t compatible and had different dreams.

Sydney then worked three jobs for two months, saved up enough money for a new van, launched her website about her lifestyle, and was ready to hit the road in September 2018. But she got a friend for the journey ahead—a golden retriever doggo, Ella. Since then, the woman and her dog have been to more than 20 states.

“I always just say it’s a three-to-five-year plan. It’s been one year, maybe two years from now I’ll re-evaluate and make sure I’m still happy and this is something I still want to do,” Sydney said to Insider.

“I’ve never woken up once in the last year and not felt like this isn’t exactly what I should be doing. I don’t foresee anywhere in the near future where I want to stop, but I also don’t want to hold myself to this idea that I have to be on the road.”

Push 2 year s ago
so if she's traveling alone, then who's taking the pictures?
it's all fun and games until you're 20 years older and realized you've done nothing Lol
Reply
-1

Check 2 year s ago
Her pictures are taken by tripod. Do you know that magic @Push?

She mentioned that in ger q&a

Catshark 2 year s ago
Kudos to a brave young lady! I think its fantastic, glad to see you have the courage to do it. Have you ever considered being a truck driver? Do basically the same thing and make money doing it, your dog can join you too! (the way I afforded my dream trip, but it lasted 37 years).

Water 2 year s ago
Taking pictures with a tripod. Yeah, I'm sure. So those pictures where she's either reading or making dinner are not real? She's staging them? Sounds like something an attention whore would do. So, she's either milking the attention because she needs it, or, like most, want to avoid actually having to get a job to get money, or she's lying and is not alone.
Reply
3

Beautiful 2 year s ago
Road trips are fun, but when you're solo you got no one to share anything with, well anyone who can converse on shared experiences anyway, not discounting the dog. People will support cr*p on IG or Youtube or give to some TV preacher or shady charity. People will support this woman too at least for a while. I say have at it, but be careful. Lots of predators out there.
Reply
3

First 2 year s ago
Moms basement... The place where negativity rules a life..

Everyday 2 year s ago
Is this where I come to talk sh*te about people who are happier than I am?
Reply
0

Rush 2 year s ago
@Everyday: I don't think we have the time or space for that. Save it for your therapist.
Reply