This year, comedian Ricky Gervais hosted the Golden Globes for the fifth time 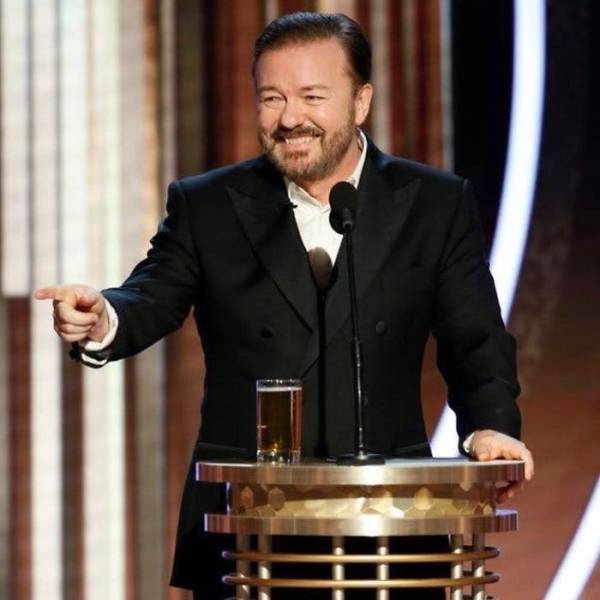 The comedian went off on an 8-minute monologue criticizing various aspects of Hollywood, bringing in issues of racism, the Epstein scandal and finishing the speech with a jab at every “woke” celebrity that tries to lecture the world as they’re receiving the awards.

During his opening speech, Gervais gave a monologue that took aim at the celebrities present

Unsurprisingly, not everyone is too happy about Gervais’ speech 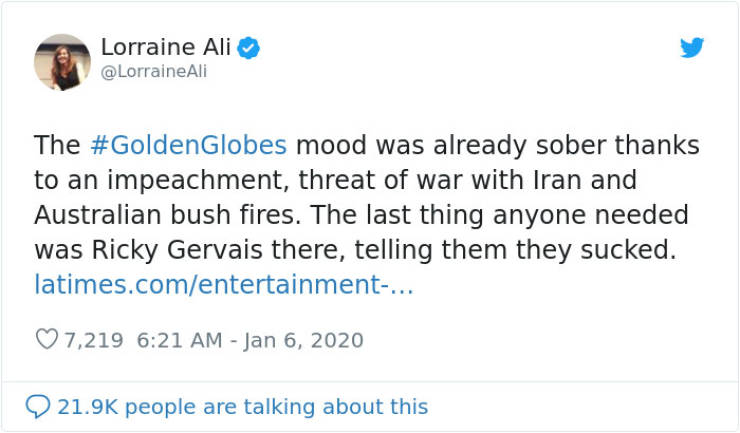 As celebrities in the audience barely laughed or had other facial expressions to offer to the jokes, most of the people on Twitter, especially those leaning towards the right political wing, praised Gervais on his choice of words. However, unsurprisingly, there were those who criticized the comedian and called him a bully. 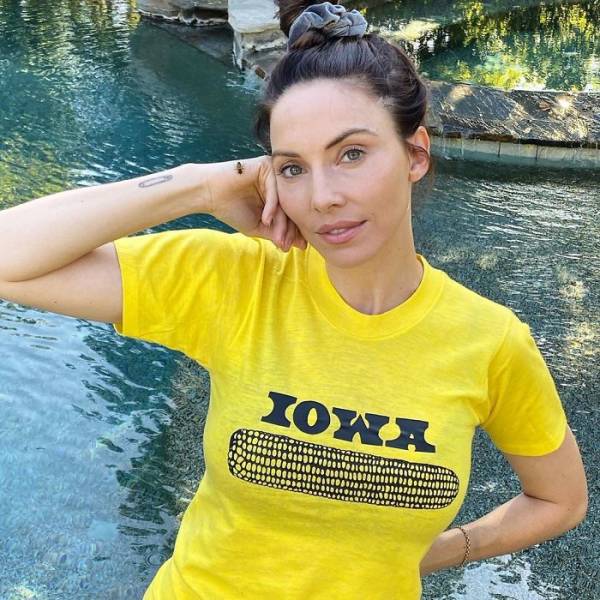 Another comedian Whitney Cummings responded on her social media page, defending her colleague, saying that “he’s done more for animal welfare than most celebrities combined.”

In response to the more conservative people praising him and regarding his criticism on the Hollywood culture as right-wing, Gervais has this to say: “How the [heck] can teasing huge corporations, and the richest, most privileged people in the world be considered right wing?” 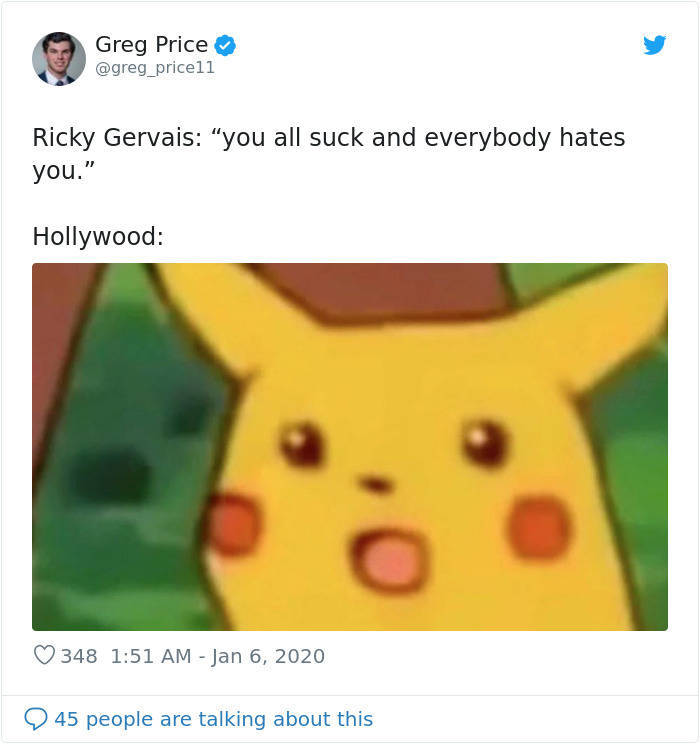 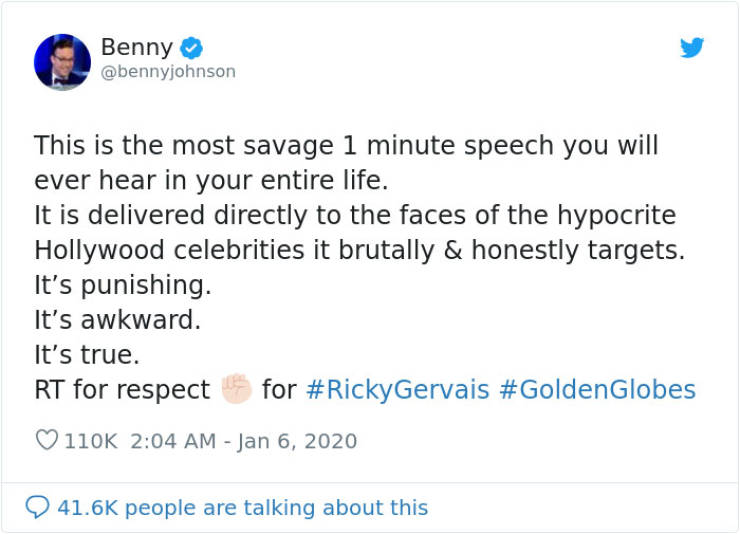 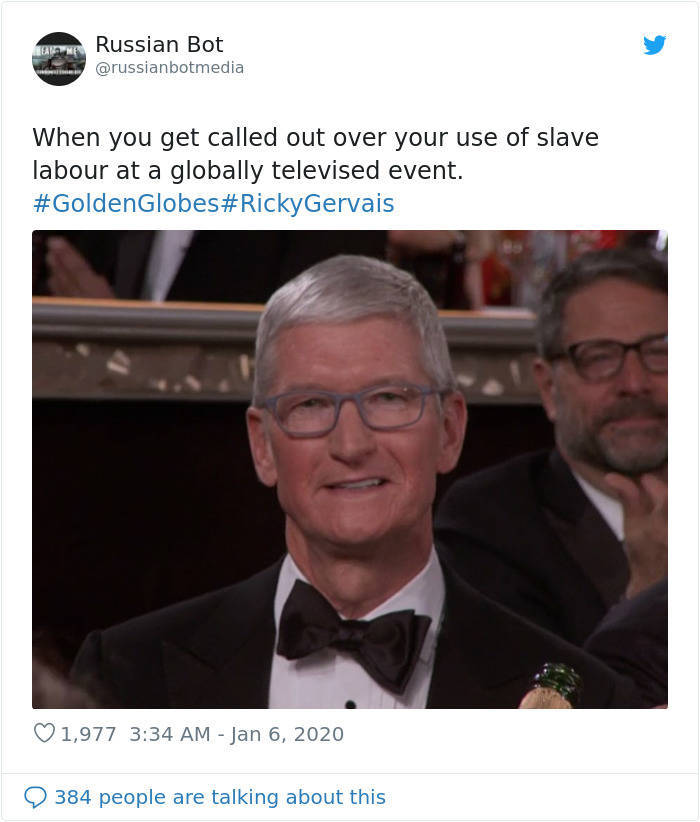 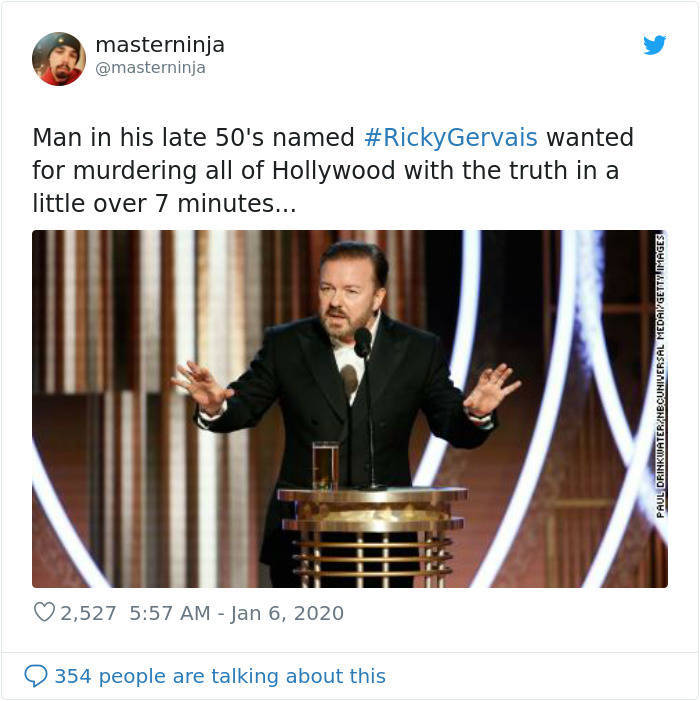 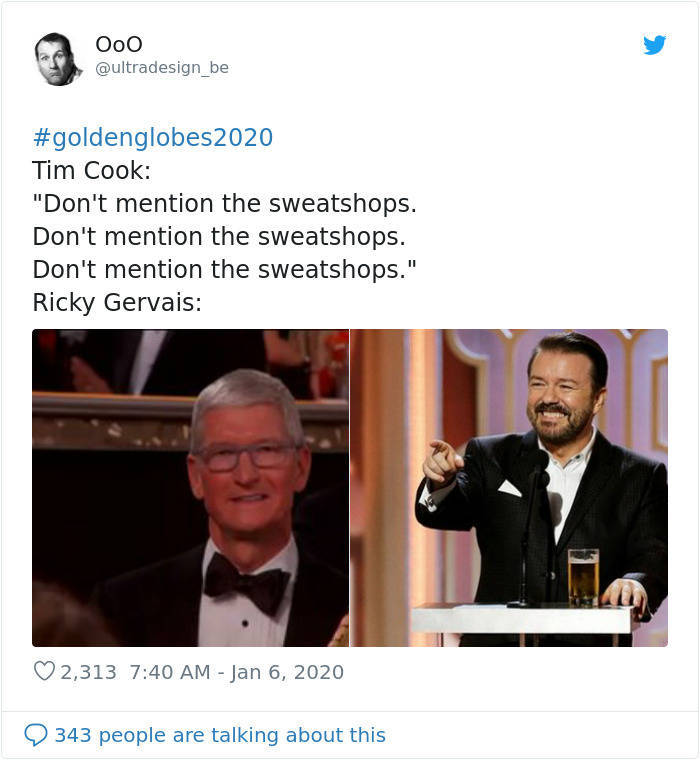 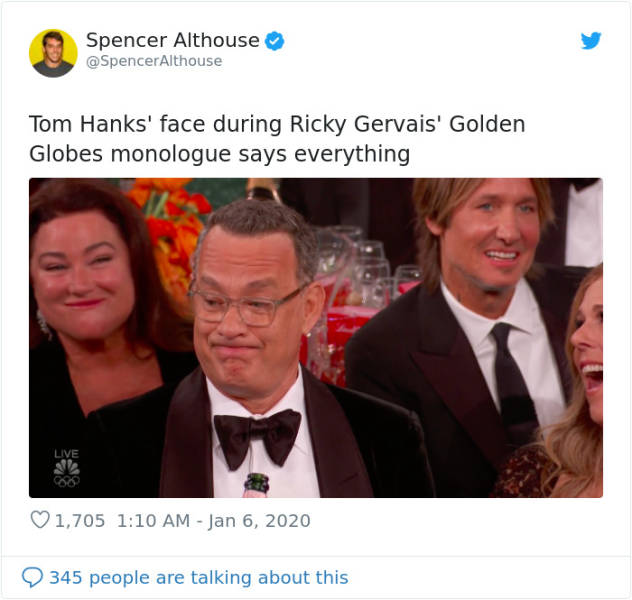 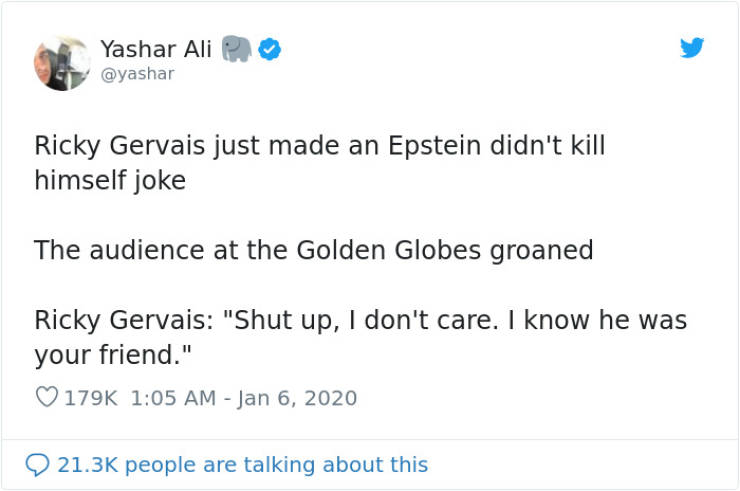 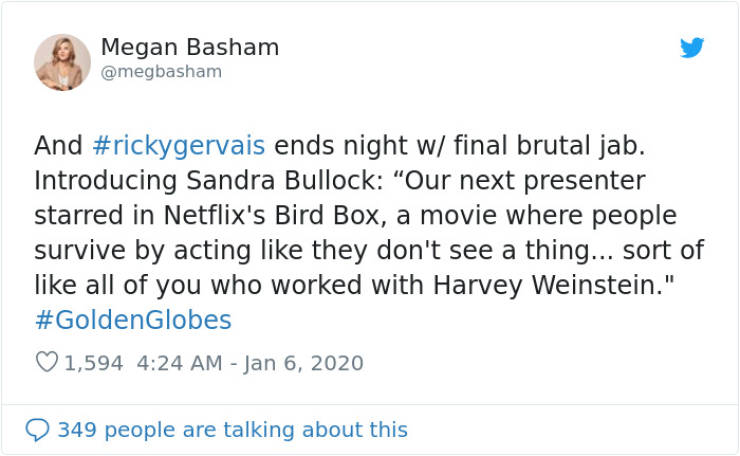 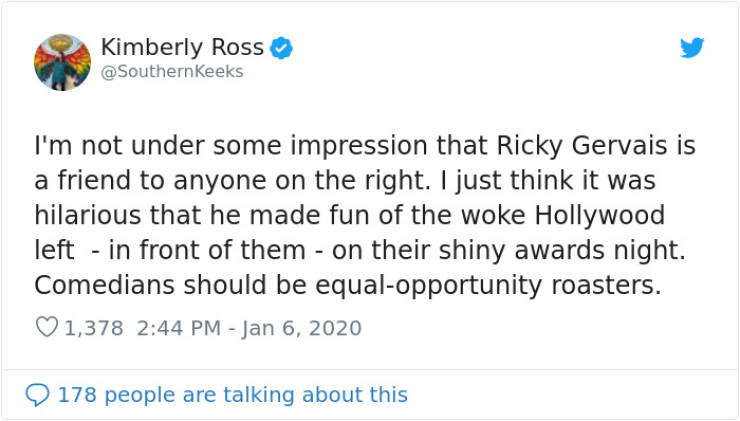 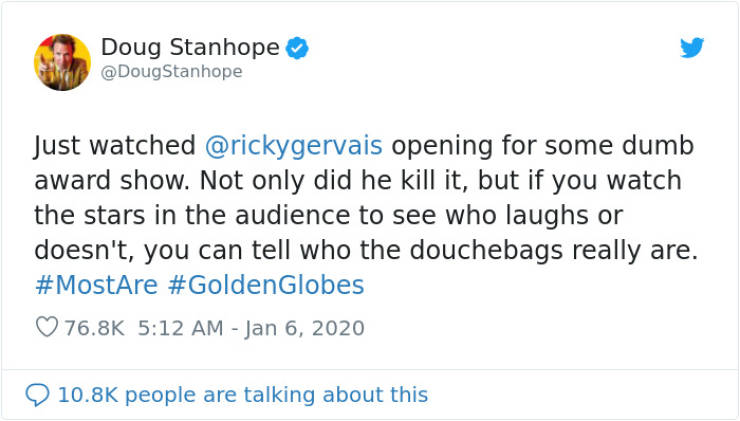 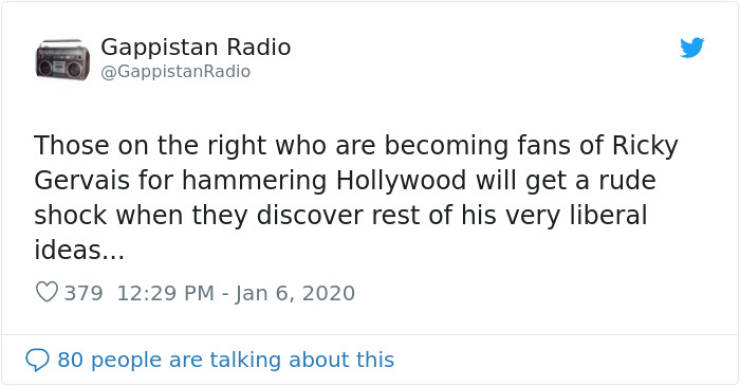 After all the uproar, Ricky Gervais still had some things left to say 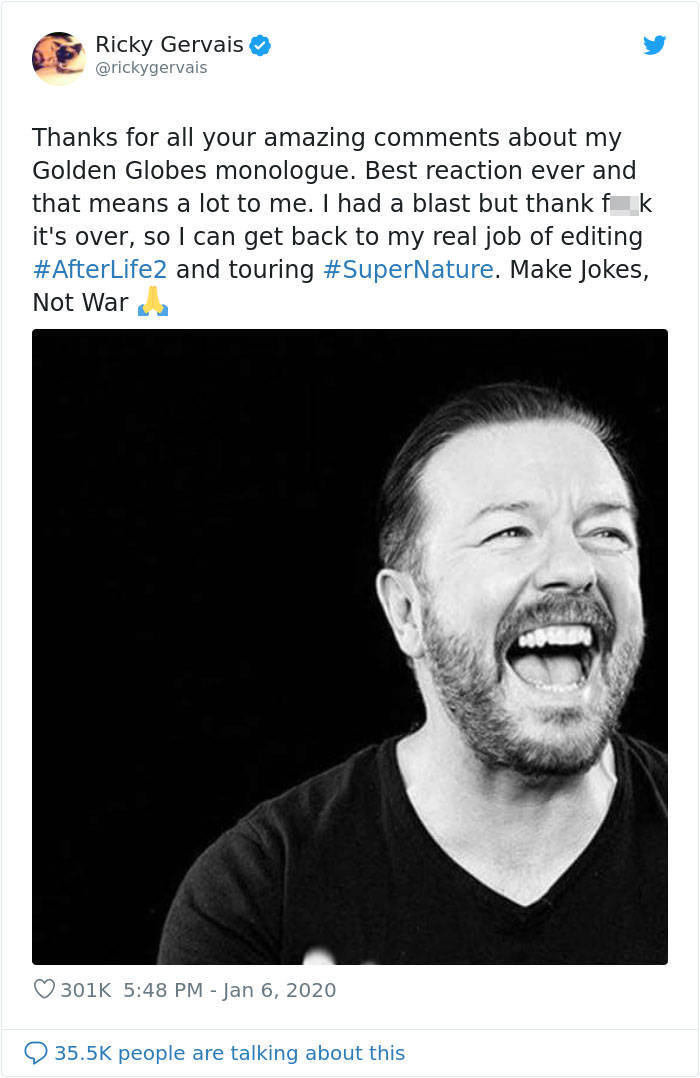 Energy Inn 4 month s ago
He did good this time.
Reply
1

Female 4 month s ago
Liberal elites call everything that triggers them “right-wing”.
Reply
2

Figure 4 month s ago
Energy Inn, As a "right-winger", I can safely say he does it well, every time. I love the guy. He's genuine and honest. Fook politics. I've loved him for decades.
Reply
1

Raccoon 4 month s ago
Not a huge fan of his but enjoyed his honesty through humor as he took down those who believe they are above being taken down.. Not once did I perceive any politics injected in his monologue..
Reply
0

salamoon 4 month s ago
Energy Inn, not only this time, but almost everytime.