The film’s budge was $197 million, with the biggest portion of the budget spent on CGI. 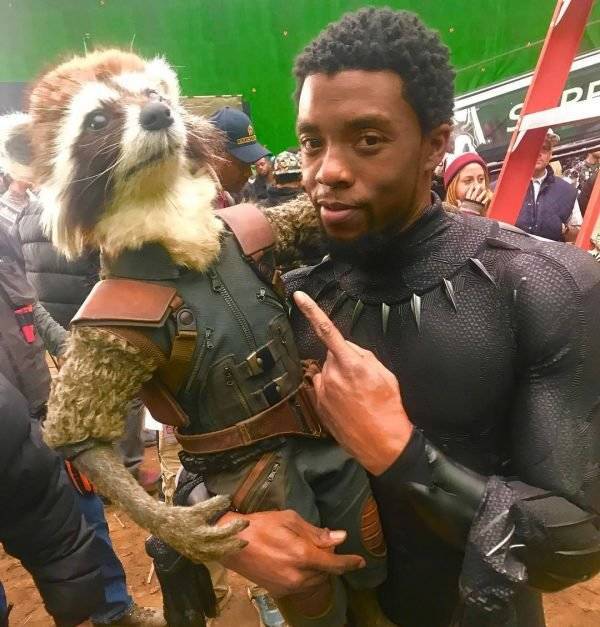 The Avengers & Guardians of the Galaxy

A doll was used to depict Rocket Raccoon in certain scenes on set. 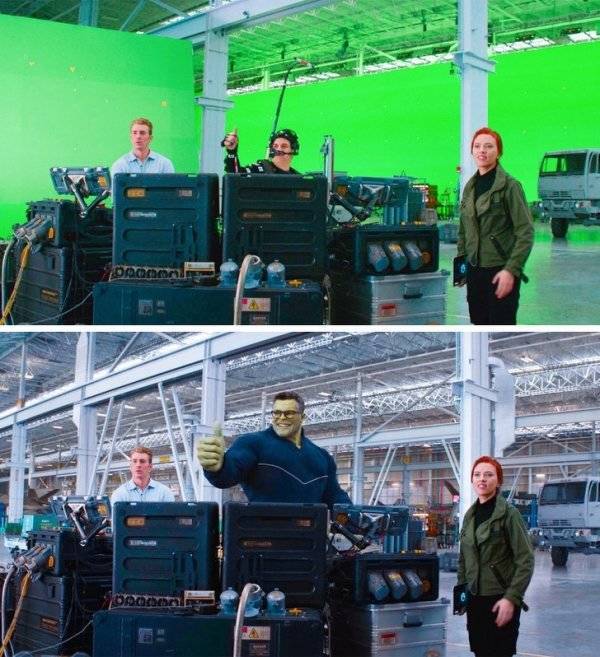 Mark Ruffalo’s character, The Hulk, was completely computer generated which meant the actor never had to sit through hair and makeup before going on set. 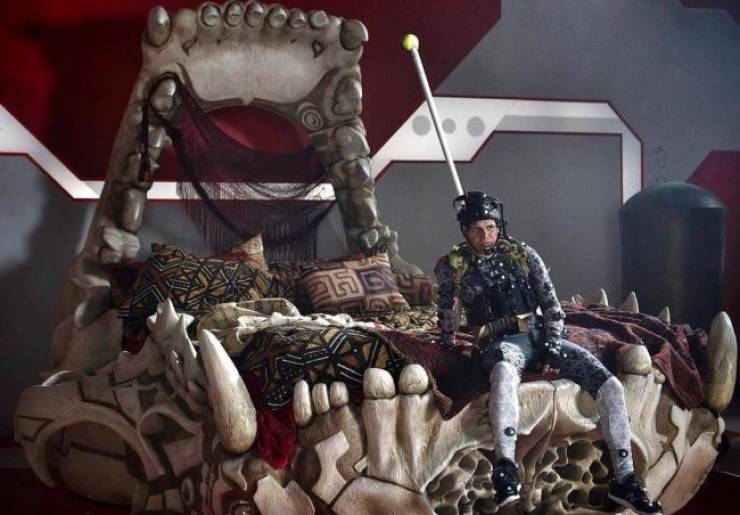 Only a couple of dots were placed on Mark Ruffalo’s face in order to capture his expressions. 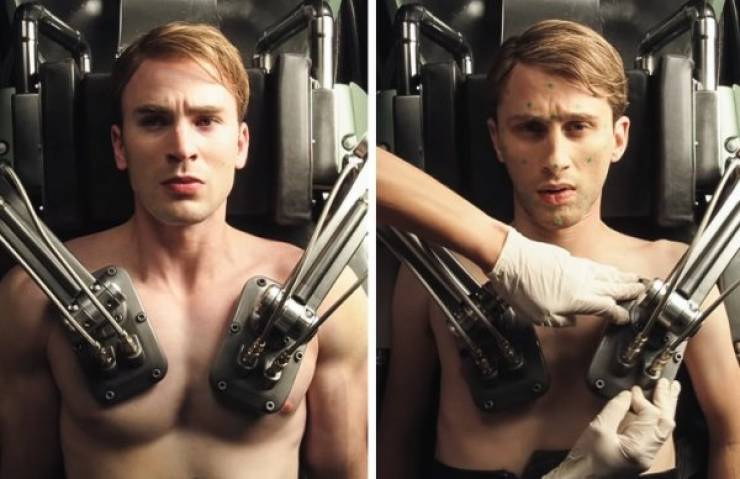 The role of Steve Rodgers before his transformation was actually played by two actors. Chris Evans made up the character’s head, while Leander Deeny was responsible for his body. Each shot was filmed with Evans, Deeny, and without the actors. 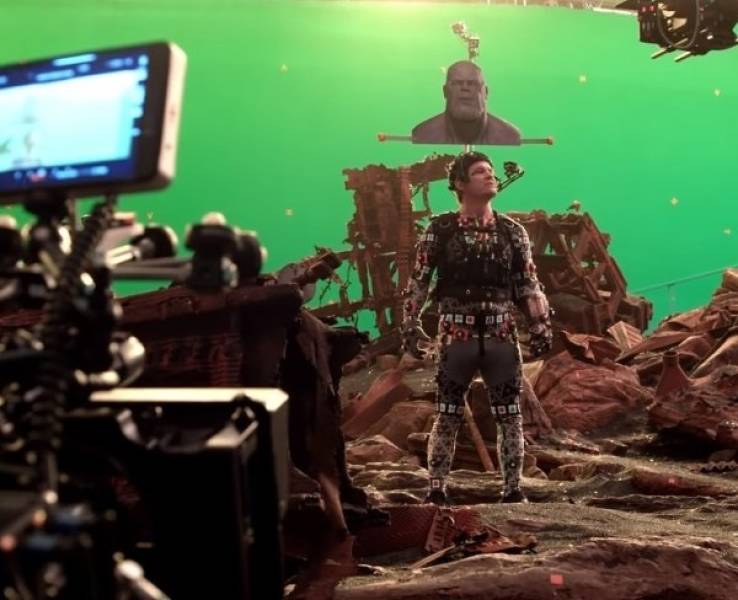 Since Thanos was a giant, Josh Brolin had to wear a stick with a cartoon bust of his character fixed to it. 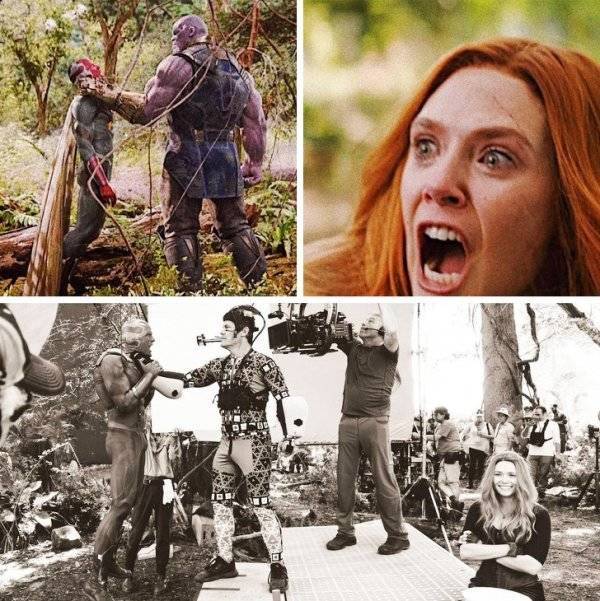 The heartbreaking scene in which Scarlet Witch watches Thanos kill Vision is a lot less threatening behind the scenes.

By the time the latest film in the Avengers franchise was shot, even the ‘regular’ character costumes were created virtually. This made things a lot easier on the costume department, especially for the scenes with the special spacesuits used for time travel. 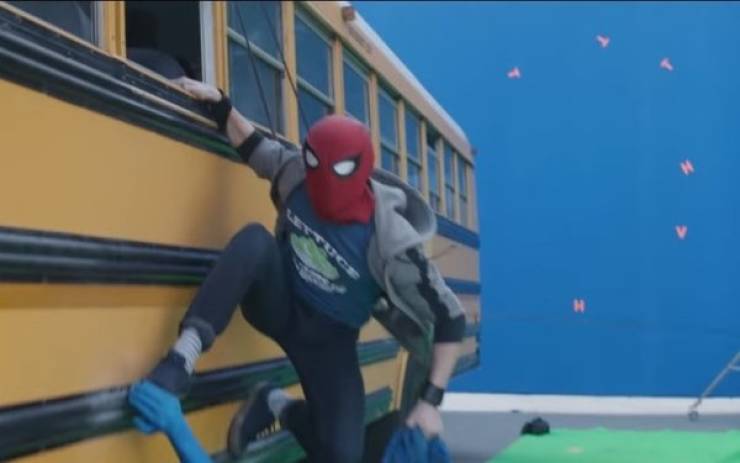 Tom Holland needed the assistance of onset crew members in order to make it look like he was sticking to vertical surfaces. 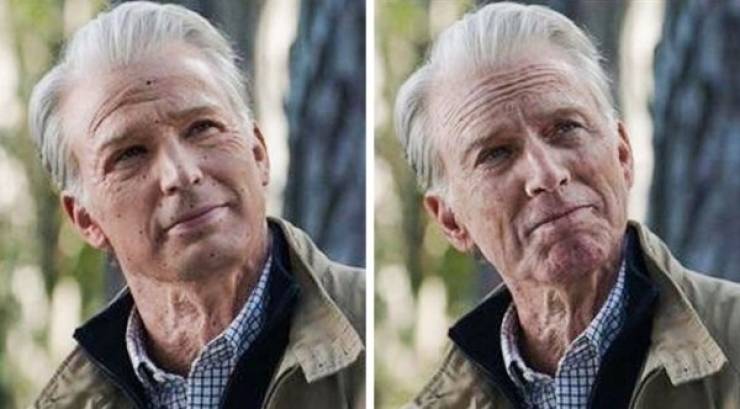 Chris Evans went through makeup and then had special marks put on his face in order for an aged Captain America to be created via computer processing. 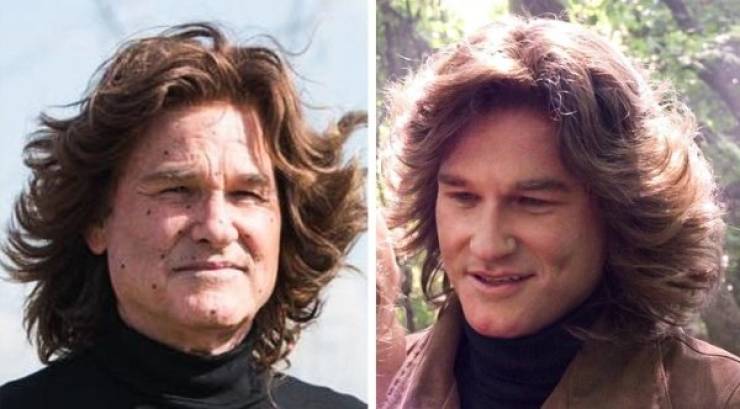 Guardians of the Galaxy Vol. 2

The use of these special effects also helped to make Kurt Russel 30 years younger in Guardians Vol 2. 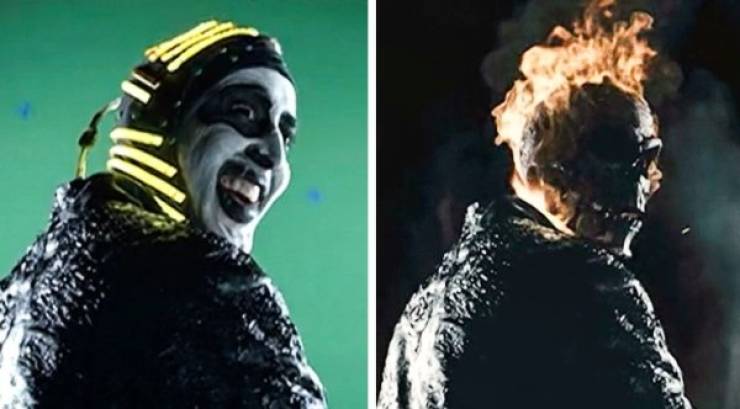 A look at Nicholas Cage’s character before visual effects.

Here’s a look at what it took to get those huge manga-inspired eyes. 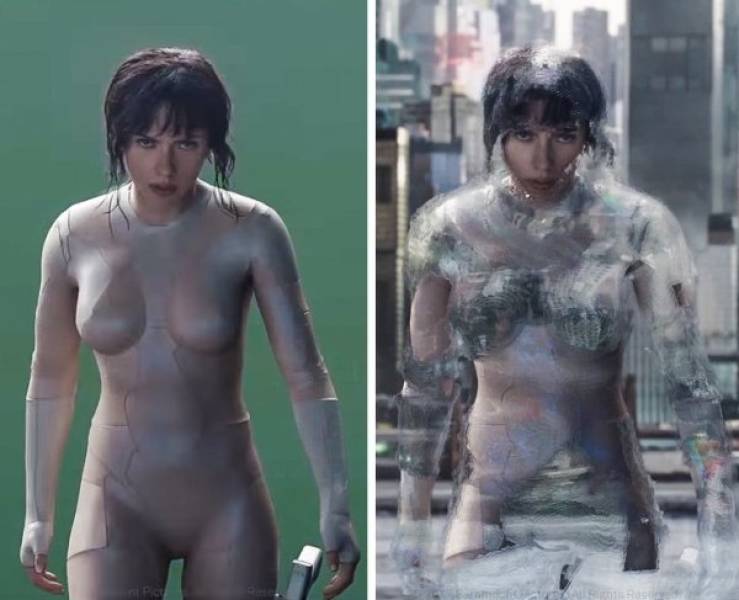 Scarlett Johansson wore a tight beige costume for most of the filming process, which made it easy on the filmmakers to add visual effects. 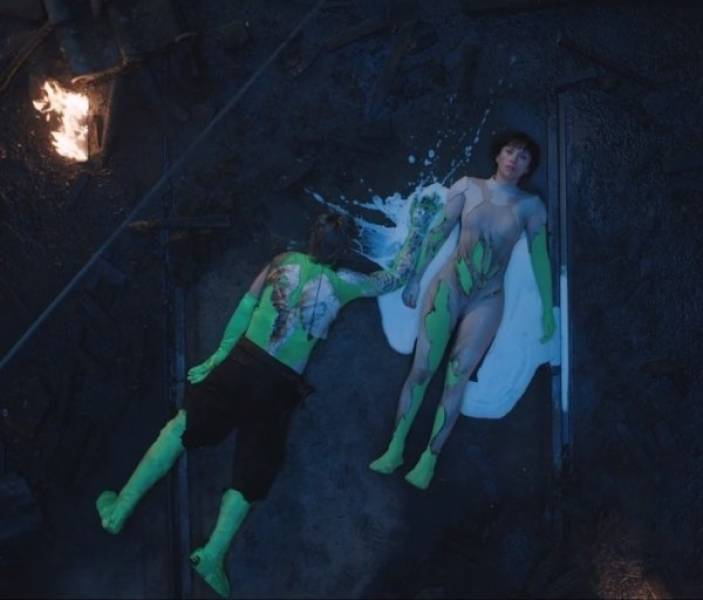 Johansson was painted green in the spots where her character was damaged in certain scenes. 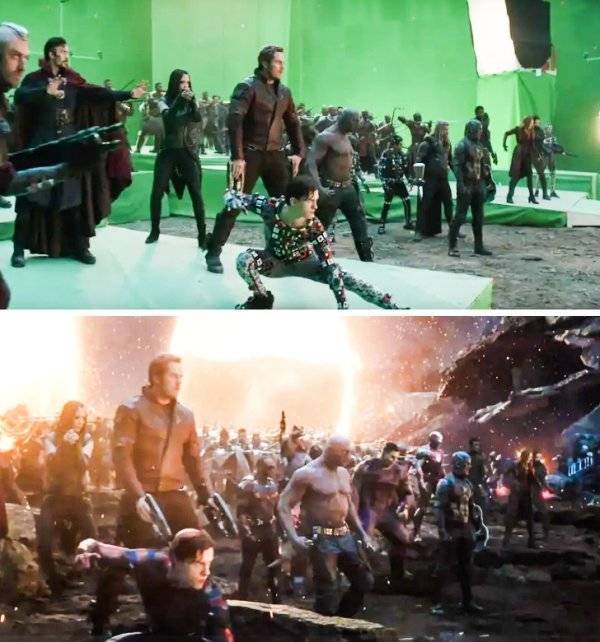 A large green screen area was made in order to fit all of the actors in this scene. 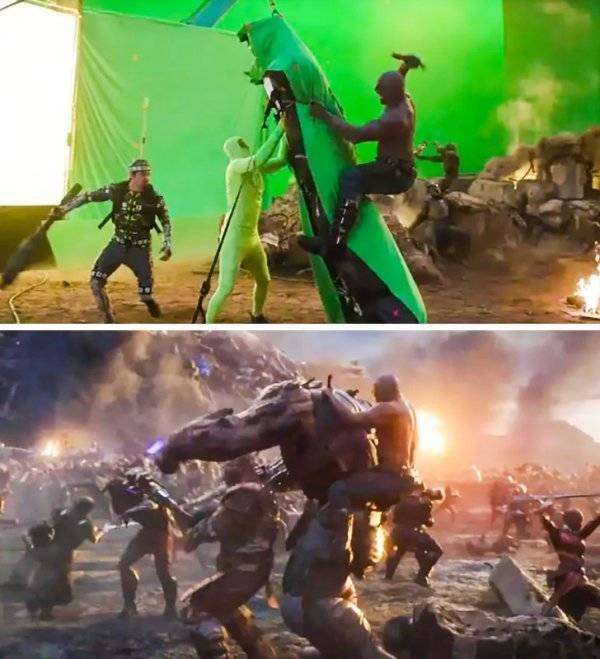 Another shot from the battle. 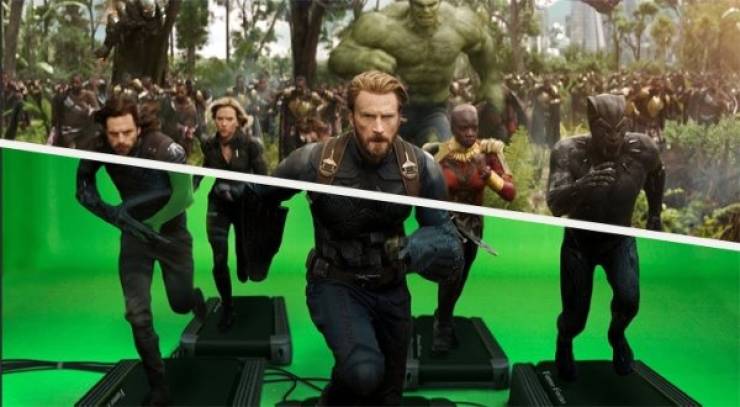 Sometimes even large studio sets aren’t enough, so the producers of the film brought in treadmills and green screens for the big running scenes. 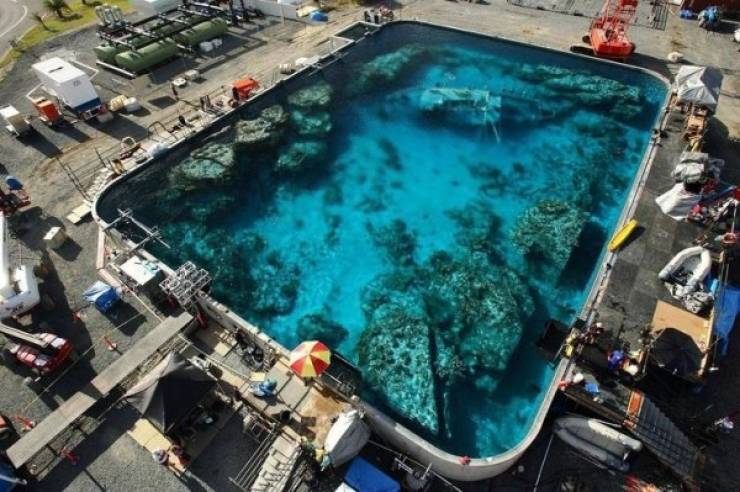 Here’s a look at the underwater set for the film.

A little bonus CGI fact: Most car commercials are shot with a ‘blackbird’ and then special effects are added.

The last few GIFs are before and special effects shots from different films.

Dawn of the Planet of the Apes