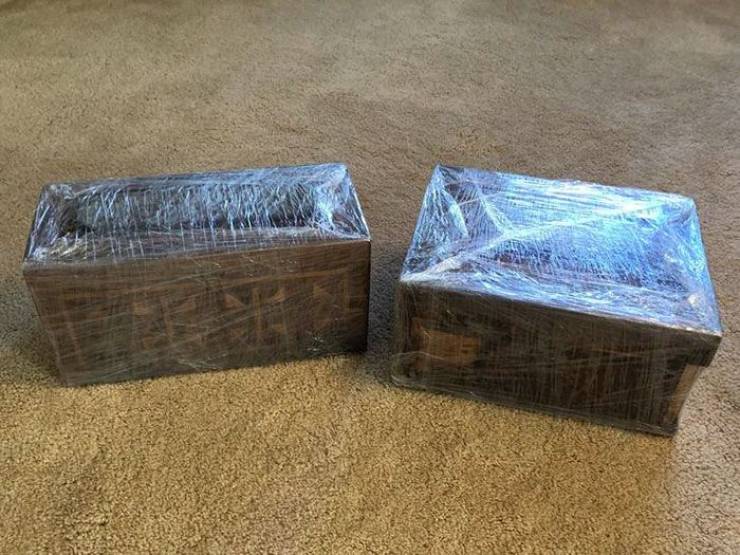 Quick backstory: My great grandfather, John Bunion Knight (1877-?), was in Leavenworth prison most of his life. Family story goes he was a bank robber and the last time his son (my grandfather) saw him as a kid there was a pile of cash and guns on the bed. Then his wife told everyone in the family that JBK had died. Fast forward many years, the son has a young son (my dad) and they are at home when the phone rings and are told that the man who they thought had been dead for decades was alive in Leavenworth prison but has late stage cancer so they are letting him out 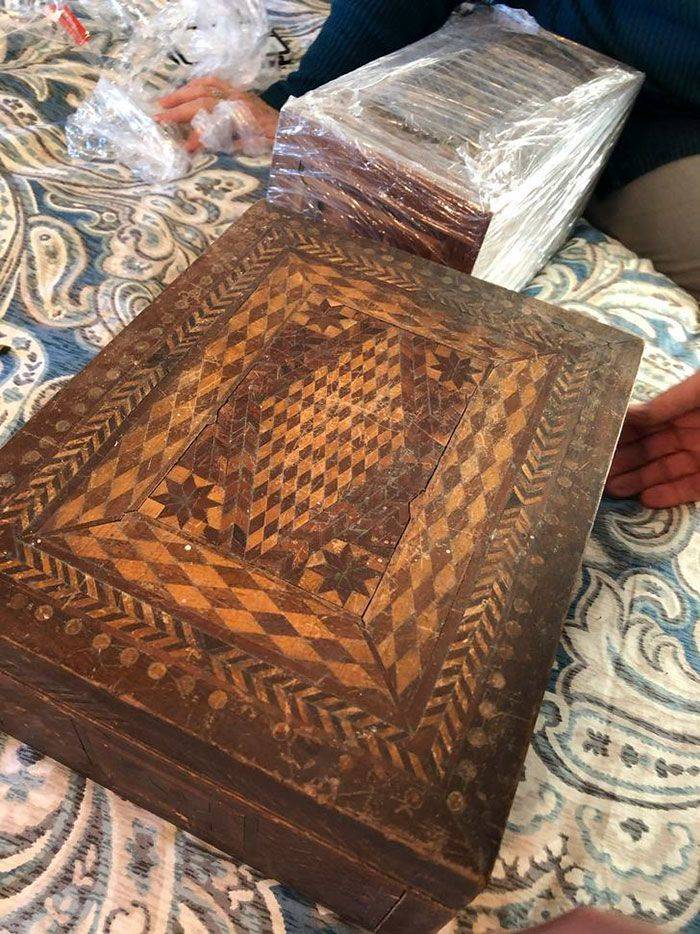 Fast forward to 2019. An extended family member passed away and his wife finds these boxes that had been passed down from JBK who made them in prison. At some point someone had wrapped them up bc the intricate woodwork was falling apart. Because JBK was on her husbands side of the family she gave the boxes to my parents to open up 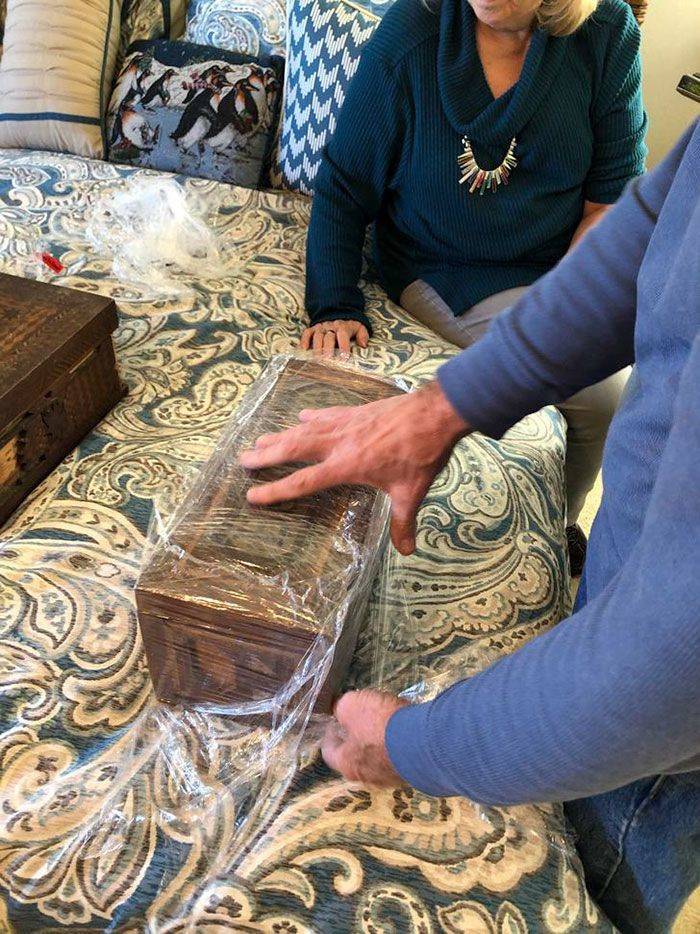 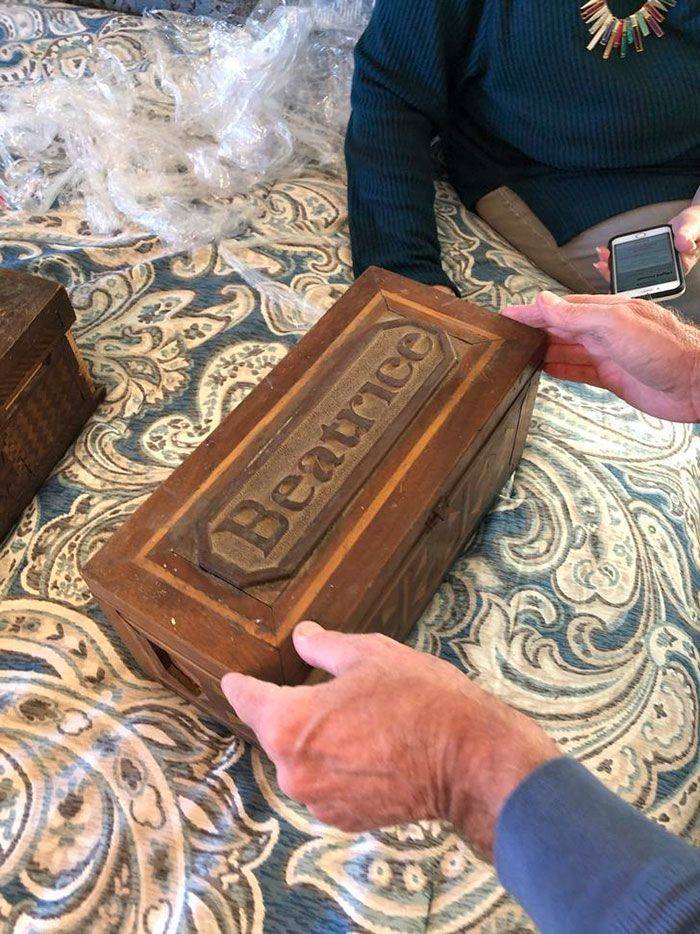 JBK had a daughter (Beatrice) and a son (my grandfather) 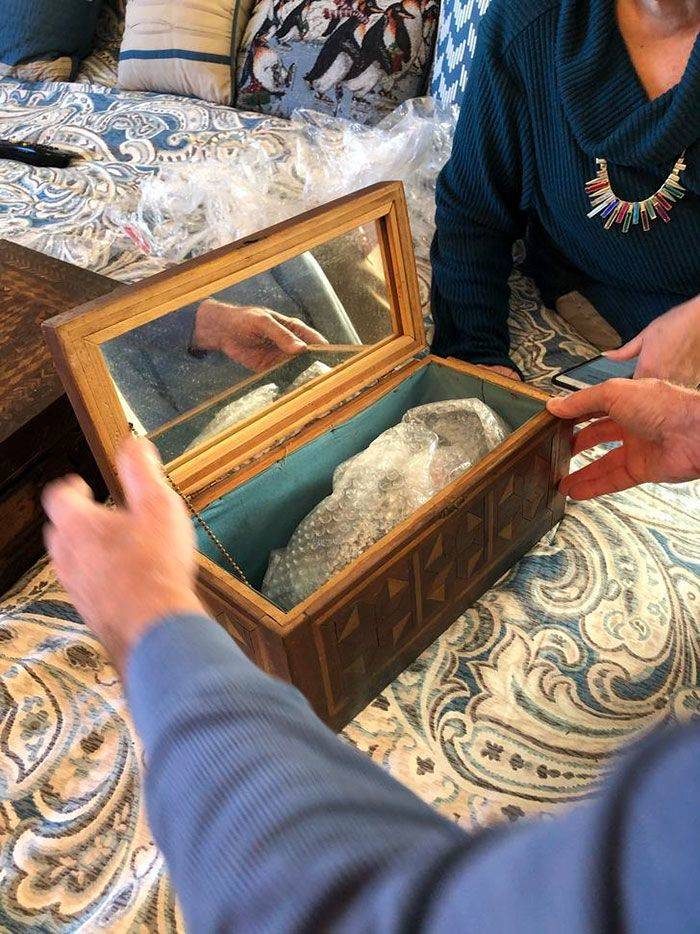 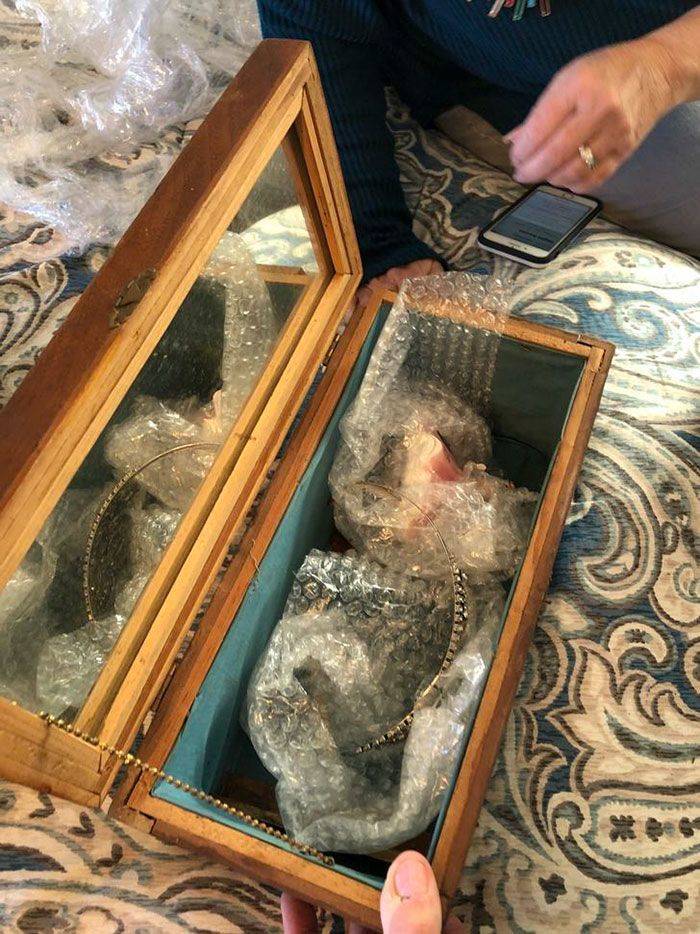 Thankfully at some point, someone protected everything. Edit: Obviously the bubble wrap is not 100 years old. My great-uncle secured the boxes and contents at some point but his wife wasn’t sure what was inside 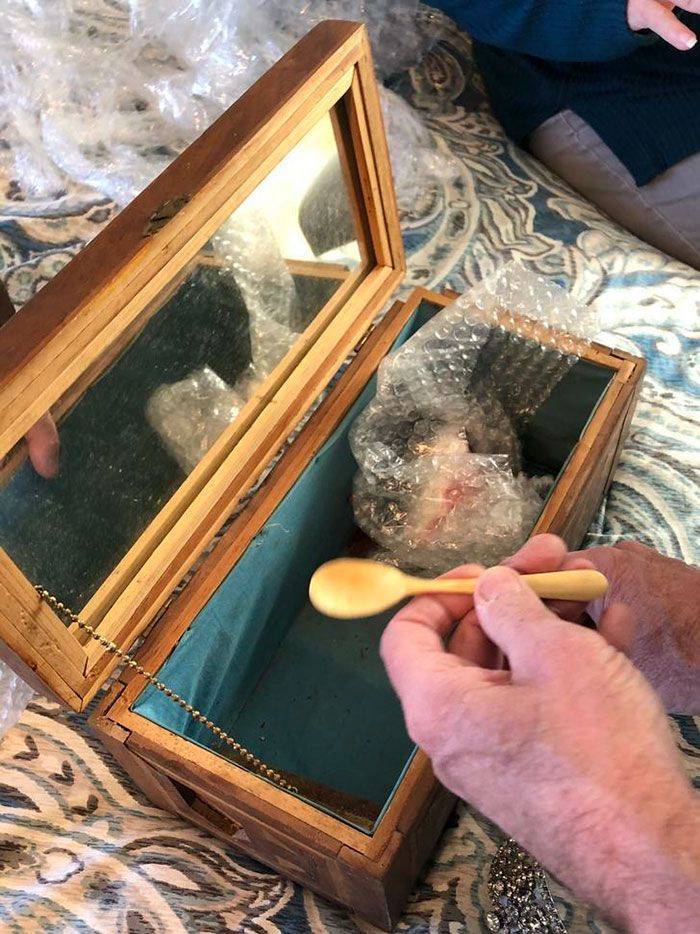 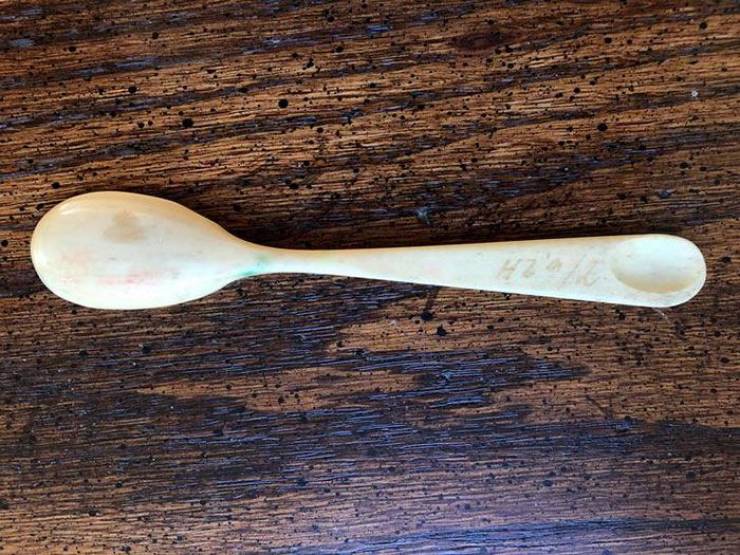 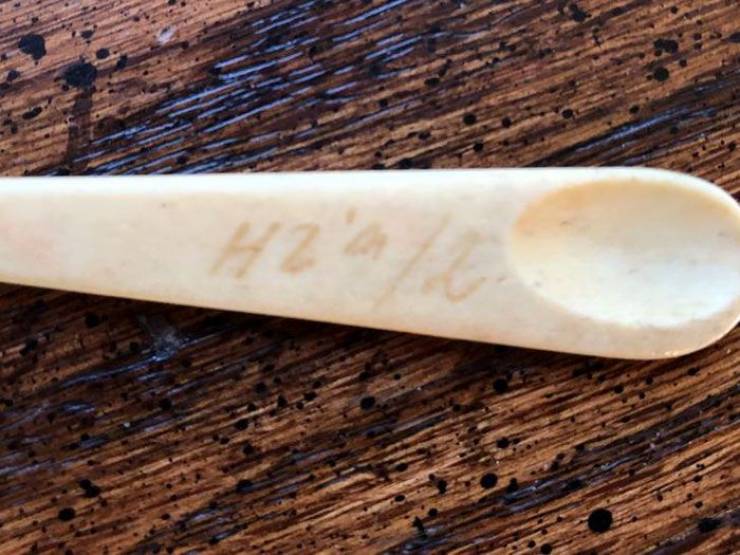 No clue what this means. Would love to know if anyone has any ideas 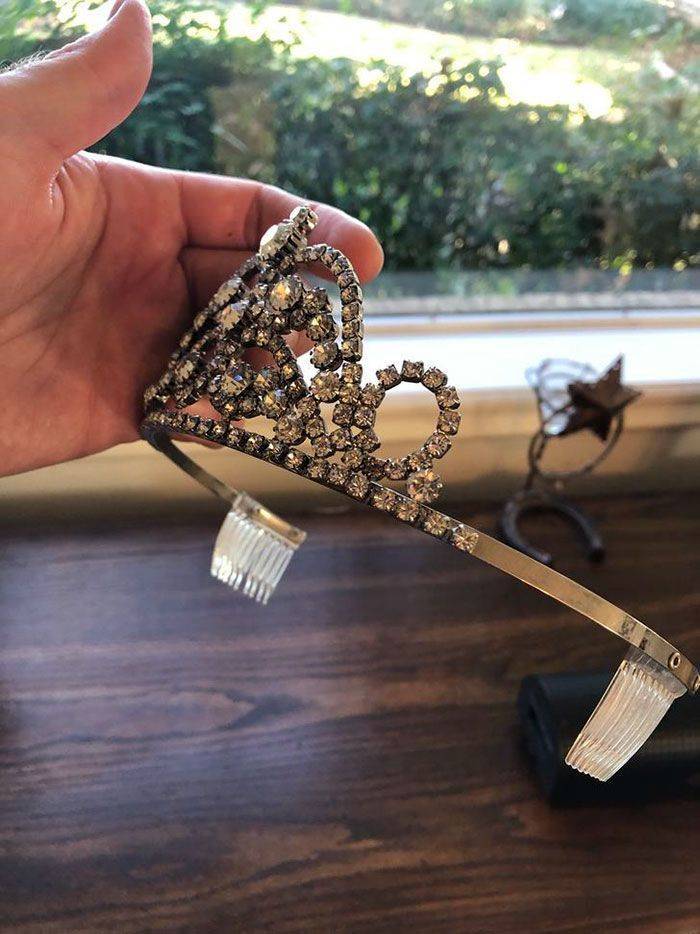 A bank robber MUST keep diamonds in his box, right?! Inside was this beautiful tiara but judging by the quality (and the fact that all of his possessions were with him in Leavenworth) this must have been Beatrice’s decorative dress up tiara that he kept with him as a keepsake 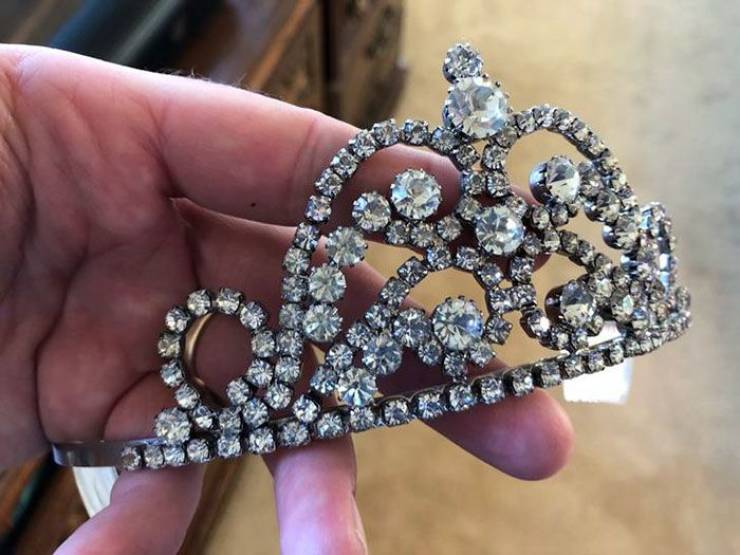 If only they were real 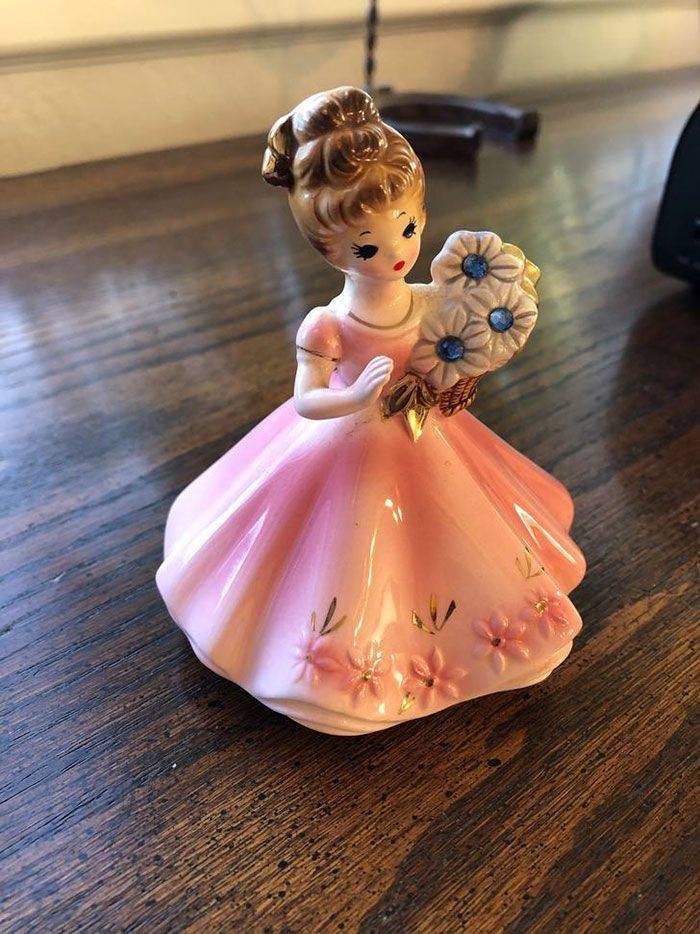 Along with the spoon, tiara, and mirror, was this beautiful porcelain figurine 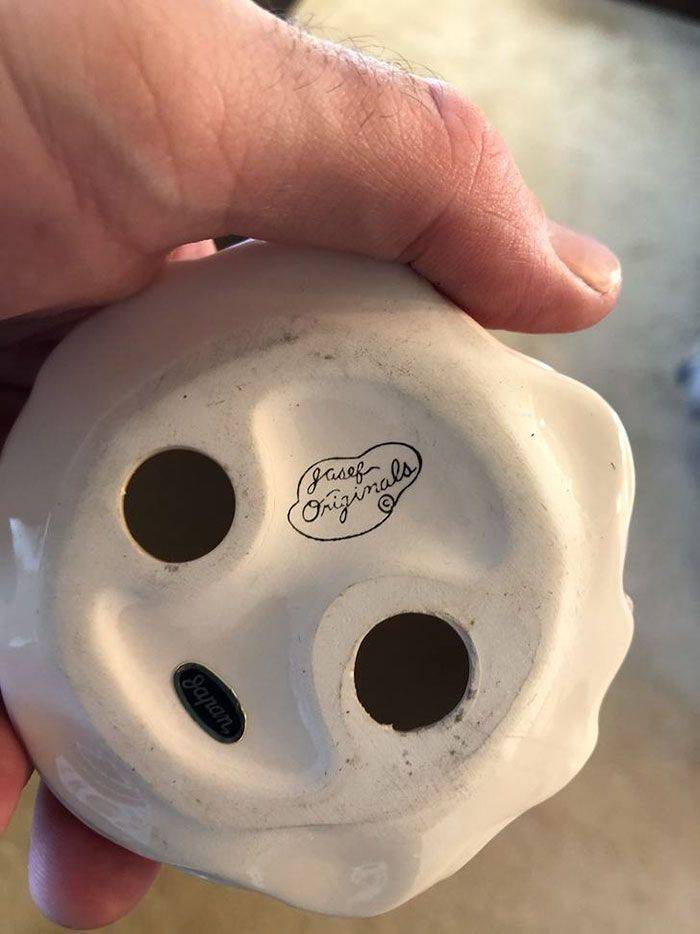 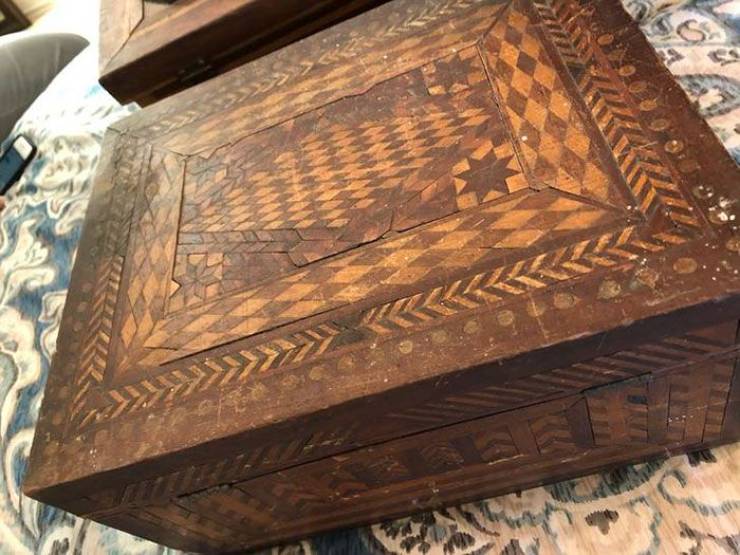 Now onto the second box! The woodwork on both is great. Obviously not a masterpiece but hundreds and hundreds of small pieces, cloth lined, lock and key, mirrors, and for +100 years old have held up pretty good. Lots of time in prison to work on it I guess. Better than anything I could create 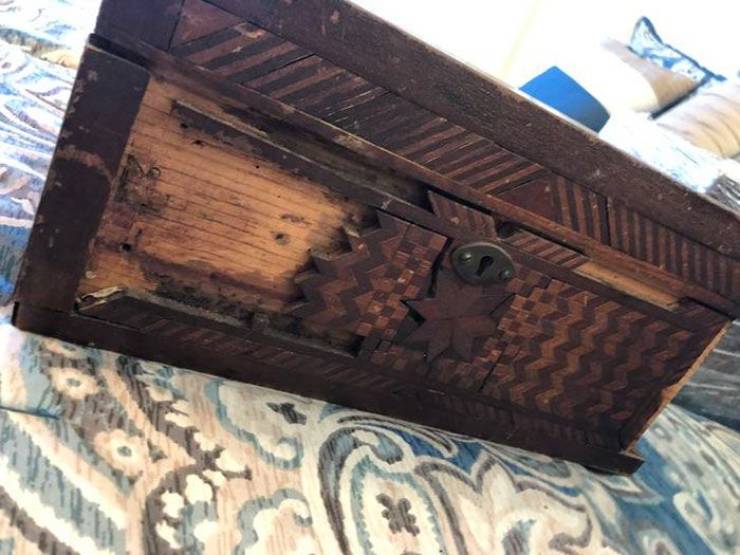 At some point, I’d love to get these boxes restored to their original beauty 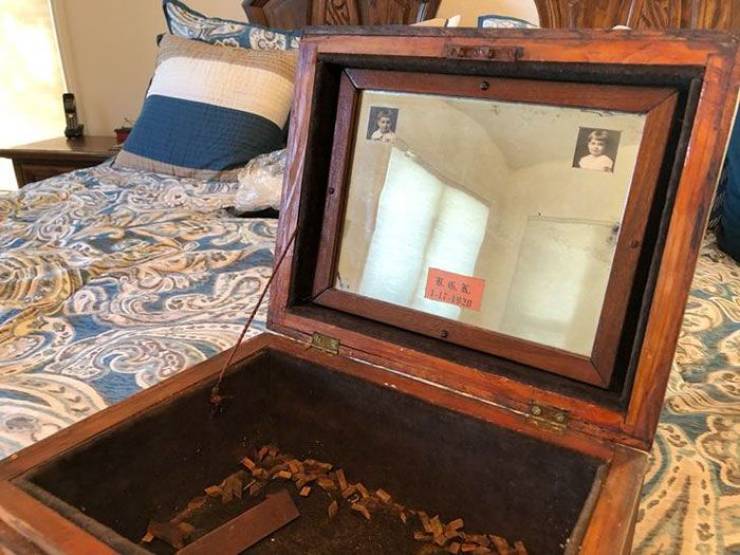 Inside the second box 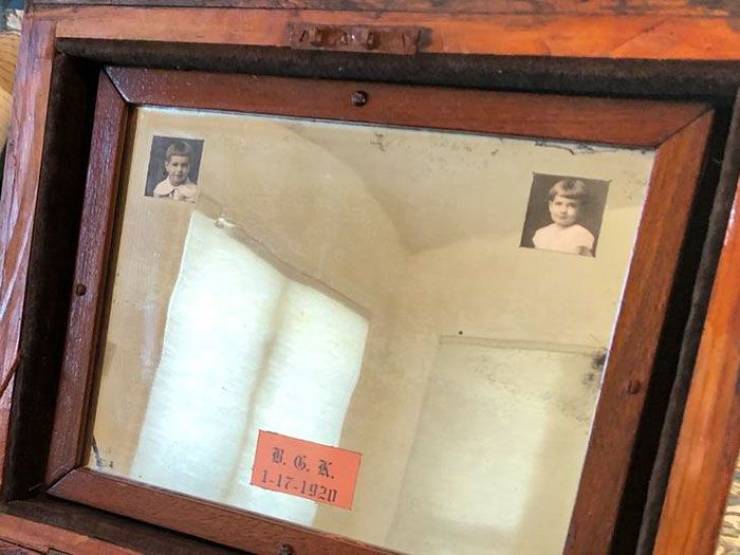 A photo of his son (my grandfather) on the left and his daughter on the right. At the bottom it has his initials and the date Jan 17, 1920, which is still a mystery. His son was born in 1918, but could be the date of his incarceration? If my grandfather and his sister had a hazy memory of money/guns on a bed then that could make sense (she was slightly older). Something to look into – but in 16 days it will be the 100 year anniversary of whatever happened! 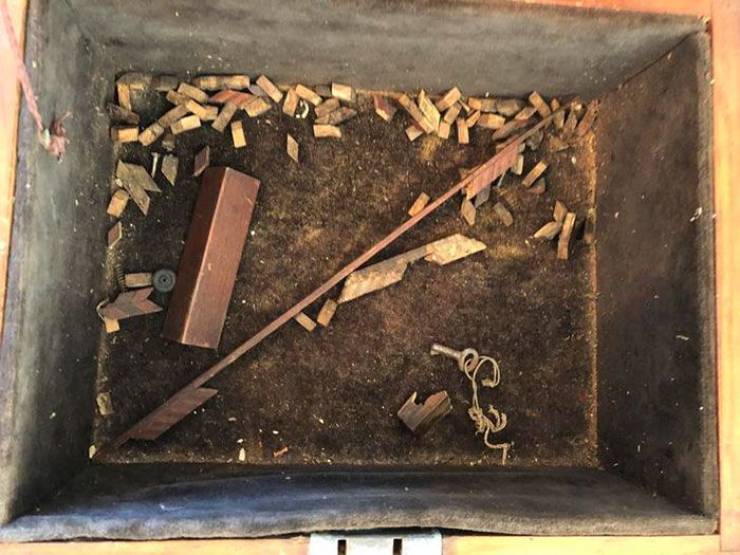 Other than the pictures above, inside there was only pieces that had fallen off and the key. But the personal keepsakes and story are worth every bit of anticipation and the payoff – at least for me, probably not for anyone hoping for a treasure map or a real diamond tiara

Figure 1 year ago
He wore that tiara in prison to gain favor with the other inmates.
Reply
-5

Stage 1 year ago
Y’all should have those beautiful boxes restored.
Reply
0

Beer 1 year ago
Have someone glue all the fallen pieces back and leave it lilke that. Restoring it will remove all historical value and make it look like a cheap handicraft trinket from overseas. Any Antique dealer would tell you the same thing.
Reply
3

Energy Inn 1 year ago
Typical. Family finds lost keepsake immediately wants to know how much they can get for it. Trashy people.
Reply
0

Driving 1 year ago
Trashy people? A no good thief that spent his life in prison instead of working and taking care of his family like a real man would? Yeah, they should be hoping for SOMETHING from the old bastard. They certainly got nothing from him while he was alive. You know, like food and clothing!!! I'm sure that no one cried when he died because he was a stranger to them. POS.