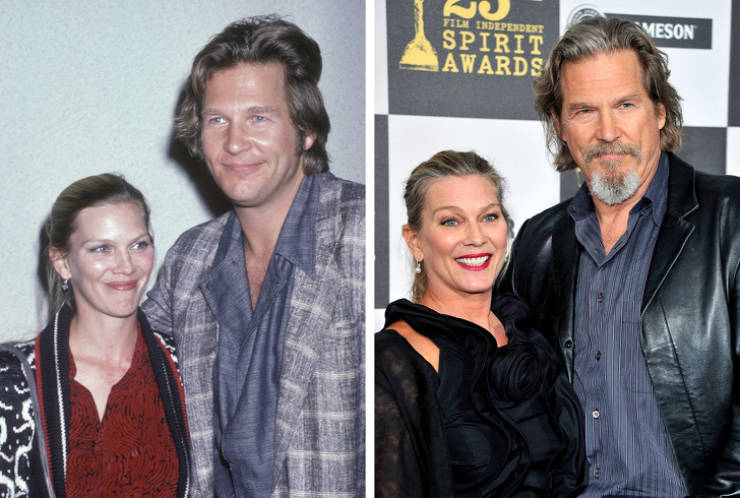 Jeff Bridges met his wife during the production of a movie he starred in, in Montana. As he reveals, he couldn’t stop looking at this gorgeous woman, with 2 black eyes and a broken nose. He asked her out but she said no. When they met again, their love journey began. Susan and Jeff have been married since 1977.

10 years later, the make-up artist from the movie in Montana contacted Jeff telling him that he had a photo of Jeff asking out a young lady on the set of the movie. The actor admits that he’s been carrying this picture around in his wallet ever since. 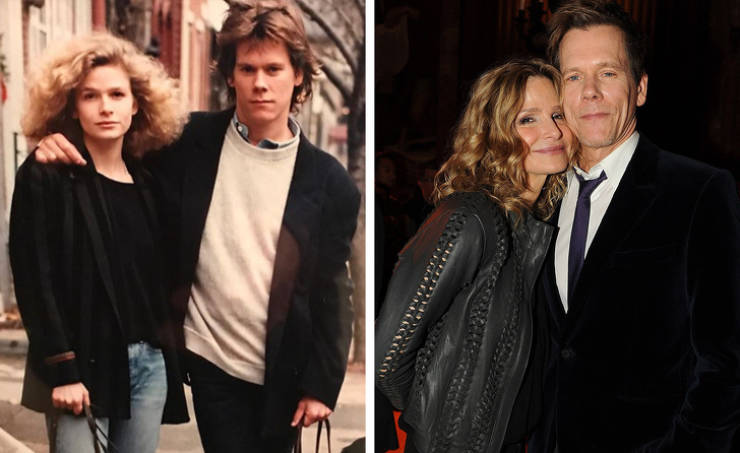 The famous actor and musician met his wife, Kyra, who is also an actress, producer, and director, on the set of the movie Lemon Sky. They fell in love and got married in 1988. Their long-lasting love has given them 2 kids. They also have a tendency to exchange loving messages on social media. 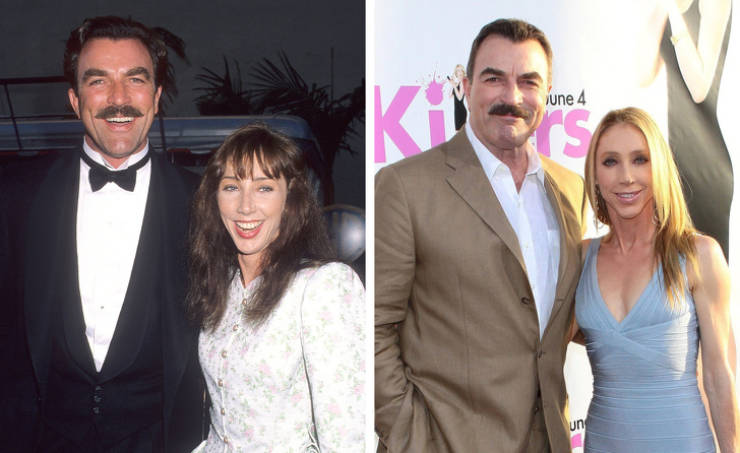 While in London with his movie crew, the actor went to see the musical Cats. That is where he met his wife-to-be, then 25-year-old actress and dancer, Jillie Joe Mack. Tom Selleck shared his desire to have a family in an interview. The setting for their happily-ever-after was a ranch he built and made their new home, out of the spotlight of California. 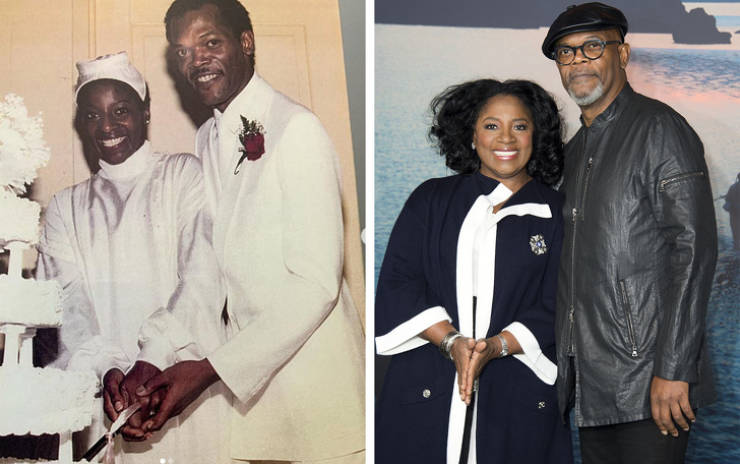 Samuel Jackson and his wife, also an actress, LaTanya Richardson, have been happily married since 1980. LaTanya shared her secrets for their successful marriage in an interview, saying that all it needs is a big heart and a lot of work. “Keep yourself lifted,” she said, “and do not stop working.”

On their anniversary, Jackson shared a loving post on his Instagram page of their wedding day and the caption “You’re my Rock & reason to get up every day.” That’s what true love looks like. 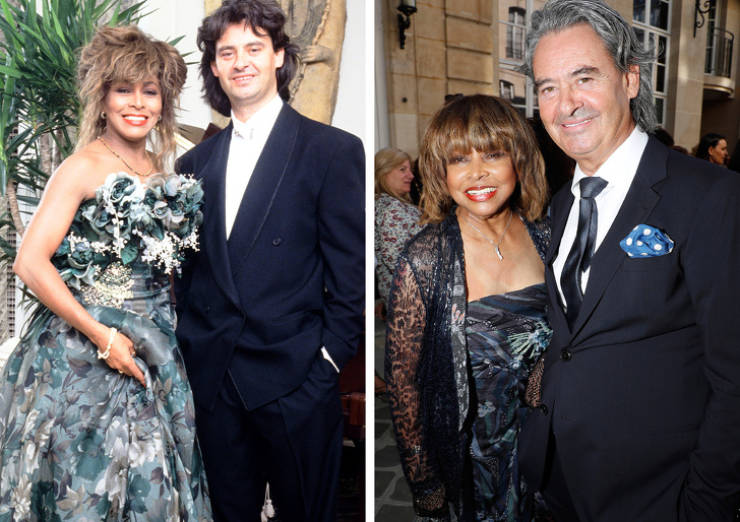 From the 90s up until a few years ago, actor and German music producer Erwin Bach had been Tina Turner’s faithful boyfriend. They finally decided to tie the knot in 2013. “I really needed to love a person,” she said, and then she met Erwin. “My hands were wet, it was love at first sight,” she added.

Aside from being the love of her life, Erwin is literally Turner’s hero, since he saved her life when she needed a kidney transplant and he was the donor. 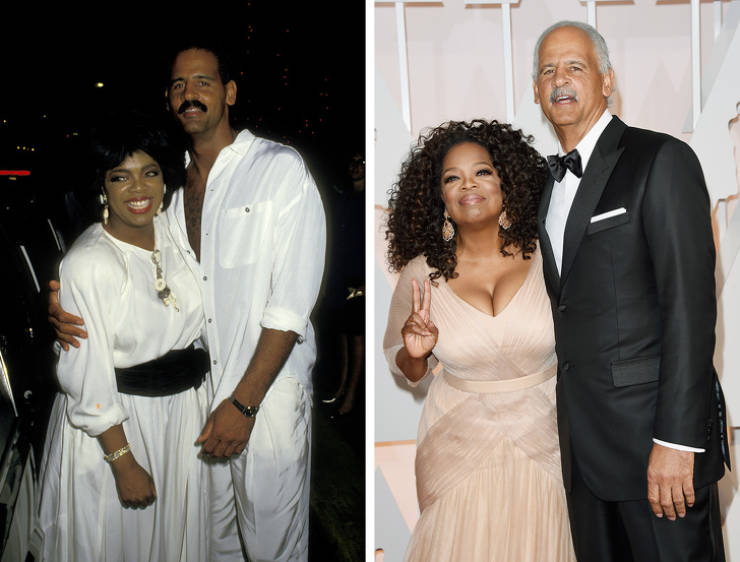 This TV star has spent more than 30 years with the author and businessman, Stedman Graham, and their love is growing day-by-day. They’ve also never stopped showing their affection in public. They were officially engaged in 1992, but never got married. When Oprah was asked whether they are getting married or not she simply replied: “Both he and I now say, ‘If we had married, we would not be together.’” 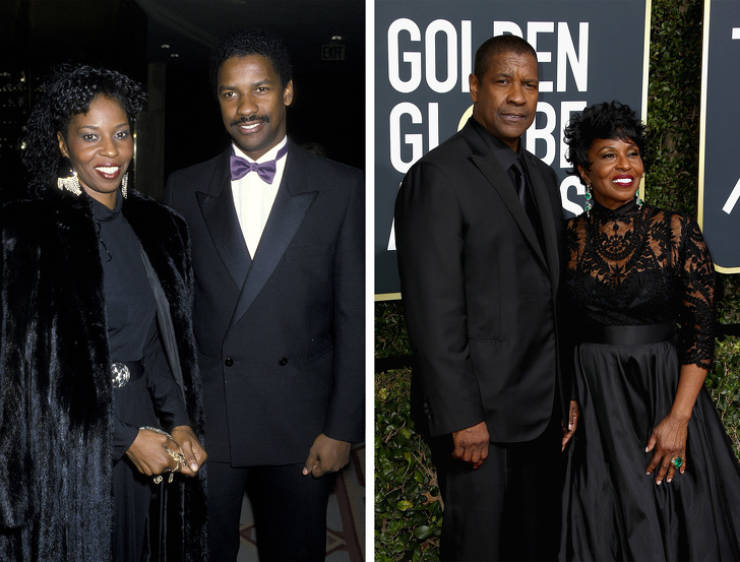 Denzel and Pauletta Washington, 37 years together

Another strong couple in Hollywood is Denzel Washington and his beloved wife Pauletta. The couple met on the set of Denzel’s first movie on TV where Pauletta was starring as well. Nothing happened then, but a year later they met again at a party and this was when the magic started.

However, making it official was a long shot since Pauletta refused his proposal a few times, before she finally said yes. In 1983 they got married and they haven’t stopped holding hands ever since. 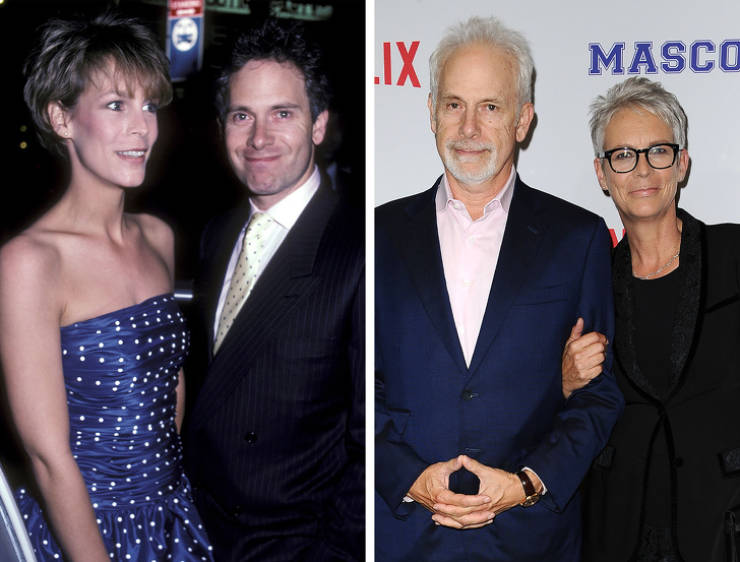 Jamie Lee Curtis and Christopher Guest got married in 1984. Curtis said that she saw a picture of Guest from the movie This Is Spinal Tap and said to her friend, “Oh, I’m going to marry that guy,” and she did. The couple adopted 2 children together and they have a lovely family. 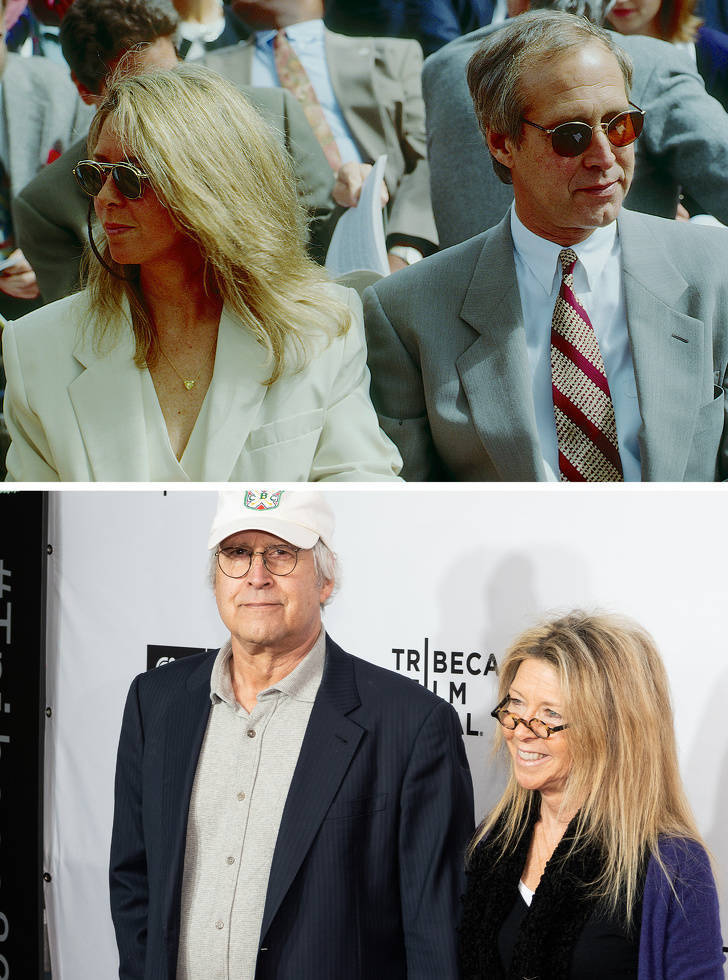 Chevy Chase and Jayni Luke have been married since 1982. However, Chevy’s love life wasn’t that smooth before meeting Luke. After 2 divorces that seriously affected him, as he says, he finally met the love of his life on the set of a movie he was starring in. One day his brother visited while he was filming and he said to him “You see that girl? I am gonna marry her.” And that was it, they tied the knot soon afterward. 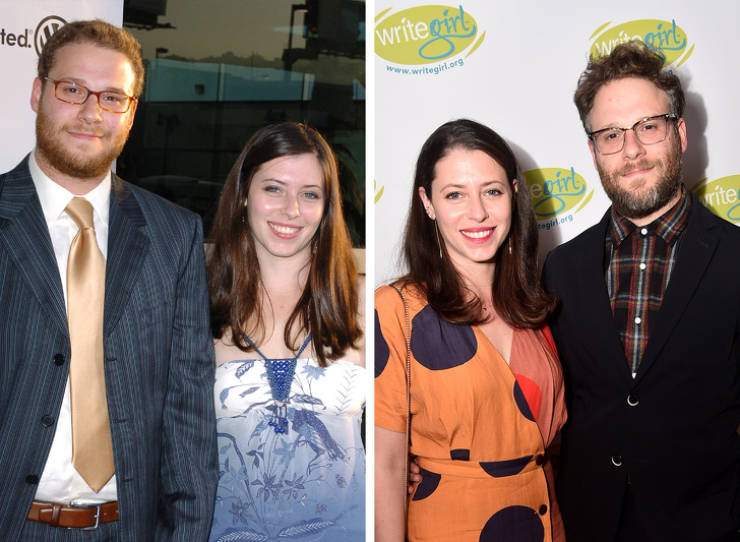 This is one of the youngest Hollywood couples, but they keep their bond strong. They have been together since 2004 and they got married in 2012. Rogen has been very supportive of Miller’s hard times with her mother, who’s battling with Alzheimer’s. They even formed a charity organization together to support research for the disease, called Hilarity for Charity. 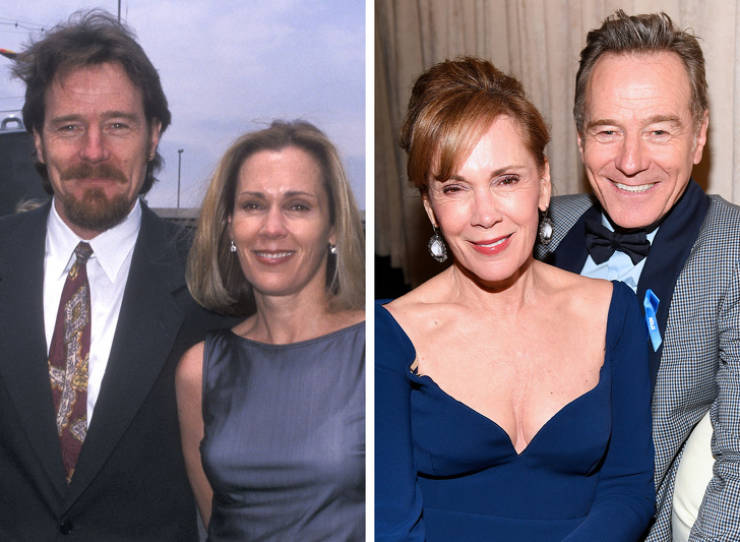 Bryan Cranston, who is mostly known for his role as Mr. White in the TV series Breaking Bad, has been happily married to actress Robin Dearden since 1989. As Cranston revealed in an interview, the secret to their successful marriage is couple’s therapy. They are both open to the therapist option together and individually, as he says. “If either of us feels like we want to go, the other can’t object,” he adds. 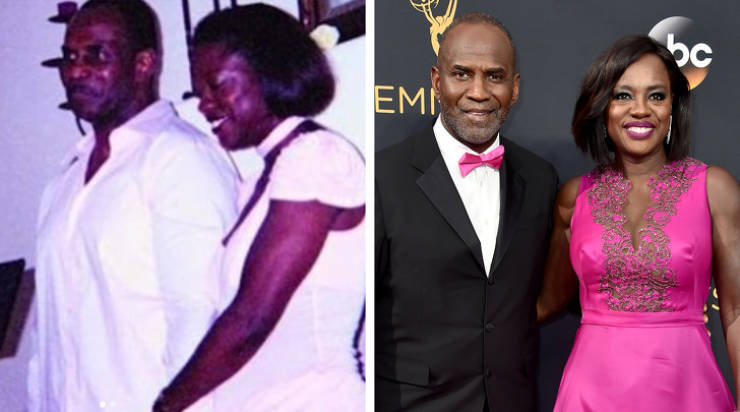 One of the most loving couples in Hollywood are Viola Davis and Julius Tennon, who has supported his successful wife every step of the way. As Viola reveals in an interview, during their first date she was terrified of how honest he was about his past and amazed at how many times he told her what a beautiful and nice woman she was. They have been inseparable ever since. 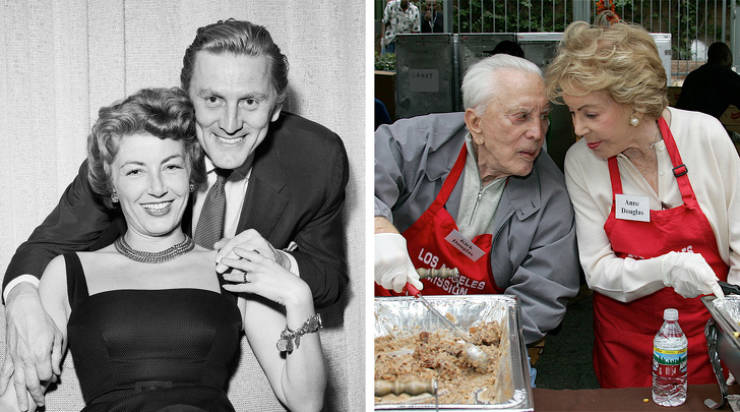 The most loyal and long-lasting couple in Hollywood, Anne Buydens and actor Kirk Douglas. The couple got married on May 29, 1954 and had 2 sons. They renewed their wedding vows in 2004, and they both turned 100 years old while holding hands.

Offer 11 month s ago
oprah and tina are the definition of friendzoned and convenient non marriage.
Reply
How to comment