Manager Wants Employee To Work Overtime, Gets A Lesson (23 pics)

TL;DR: There is a very good reason why nobody starts cell phone transactions half-an-hour before the end of the workday at their retail job. 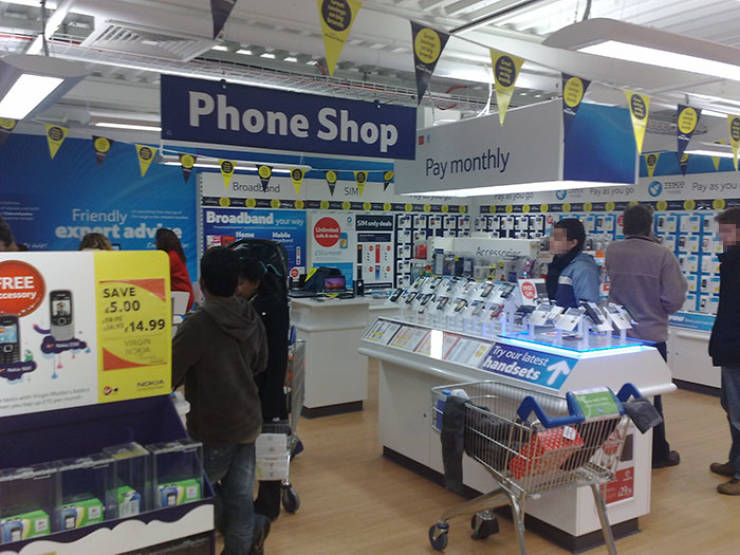 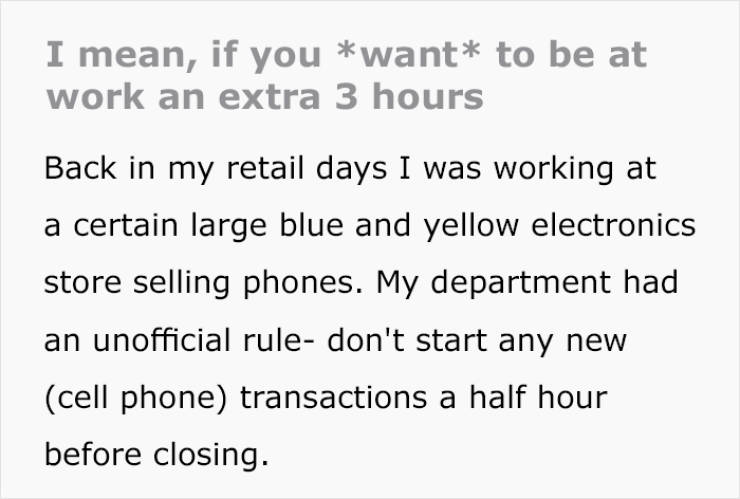 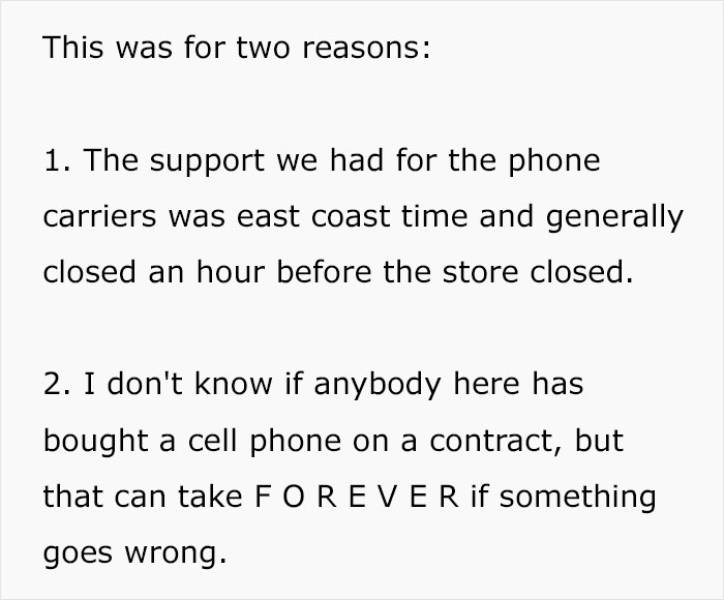 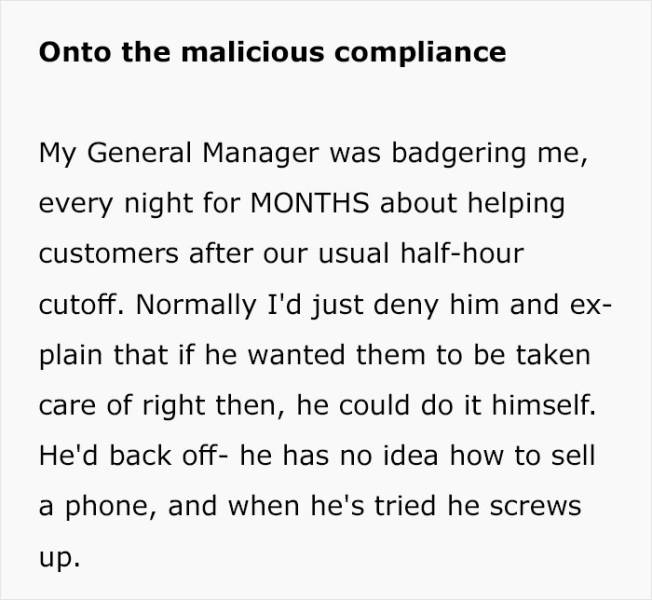 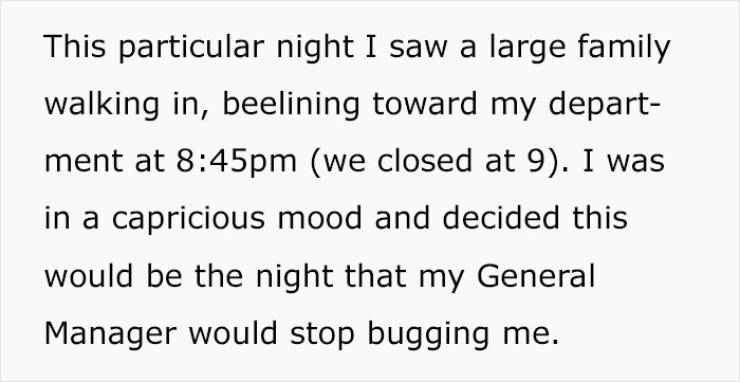 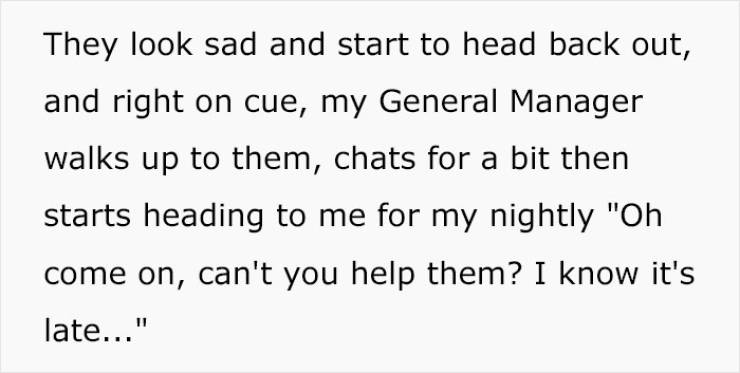 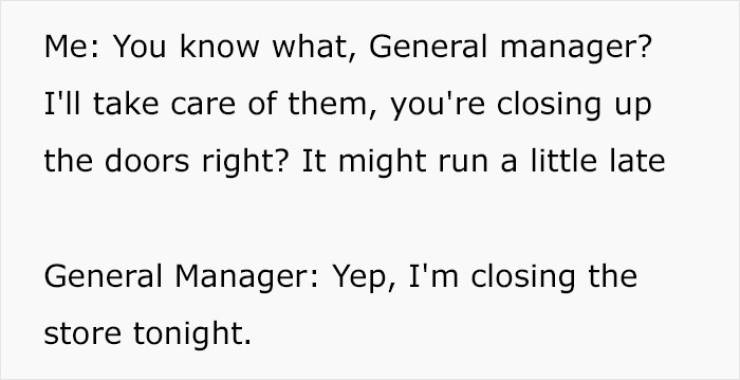 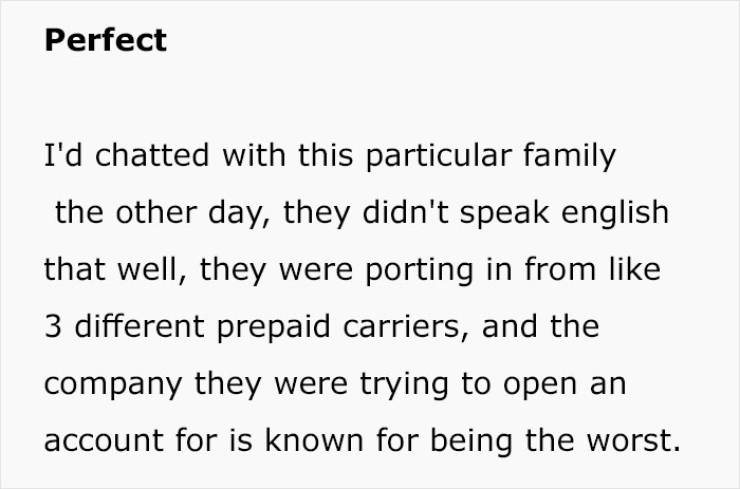 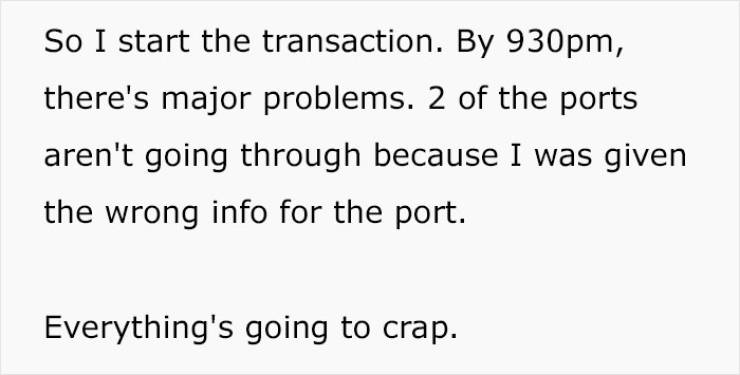 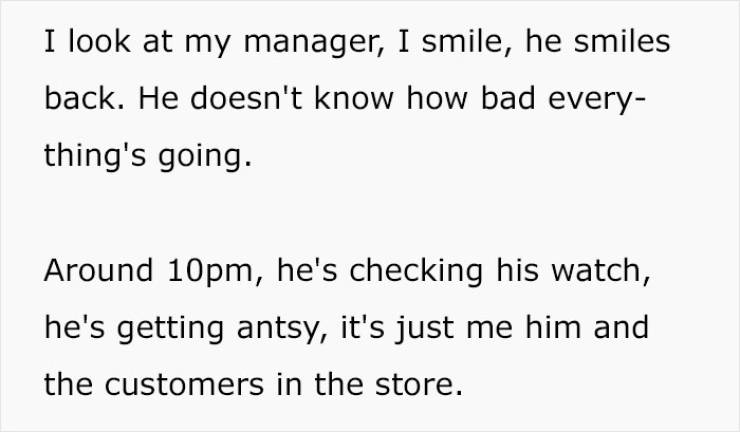 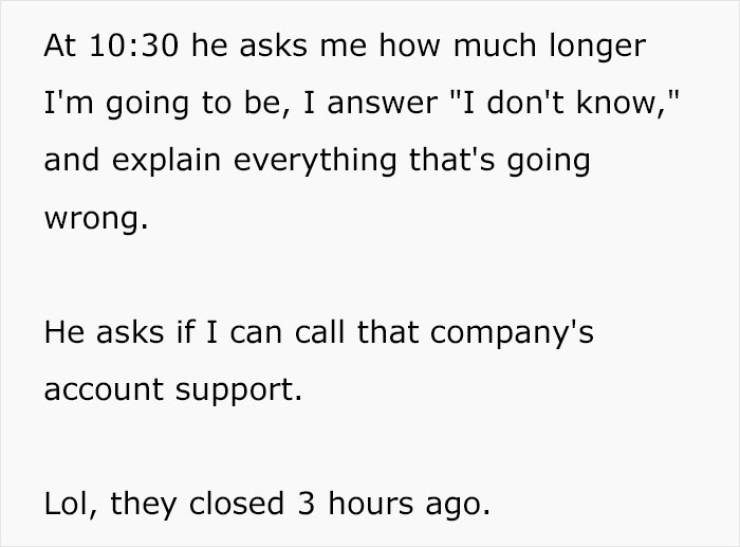 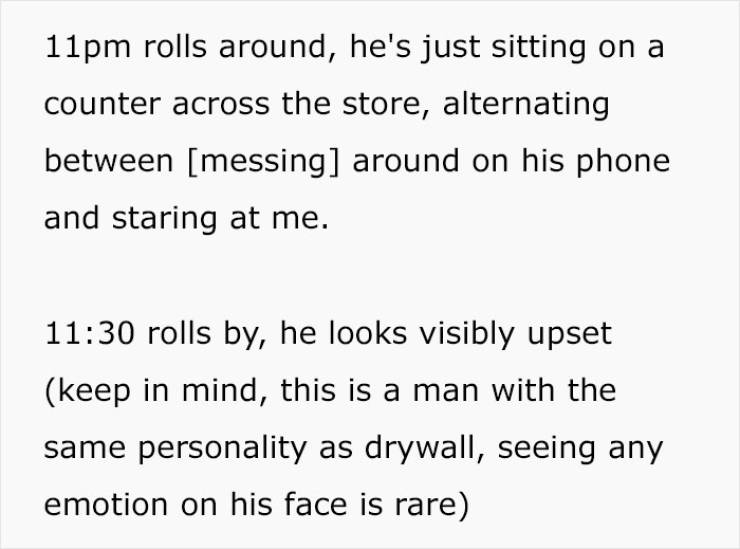 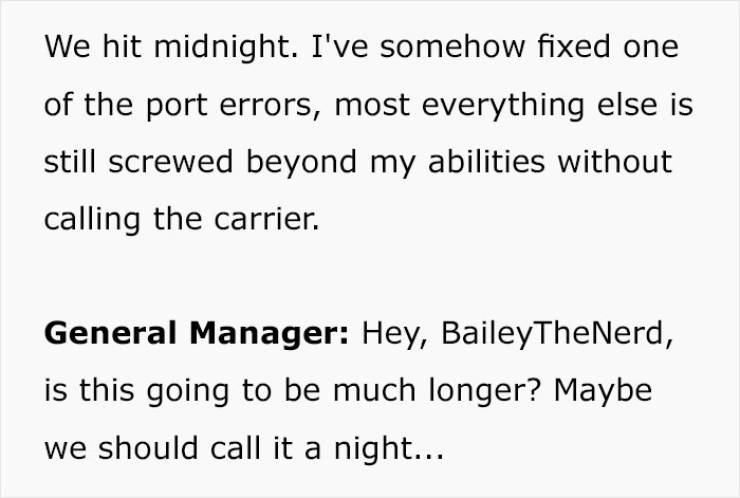 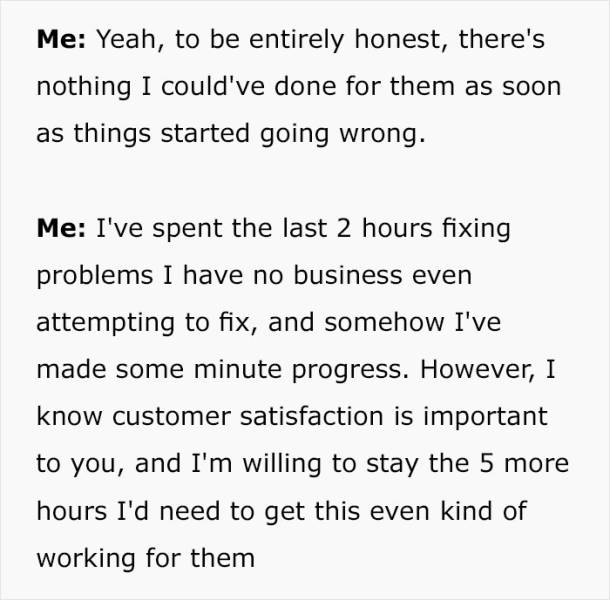 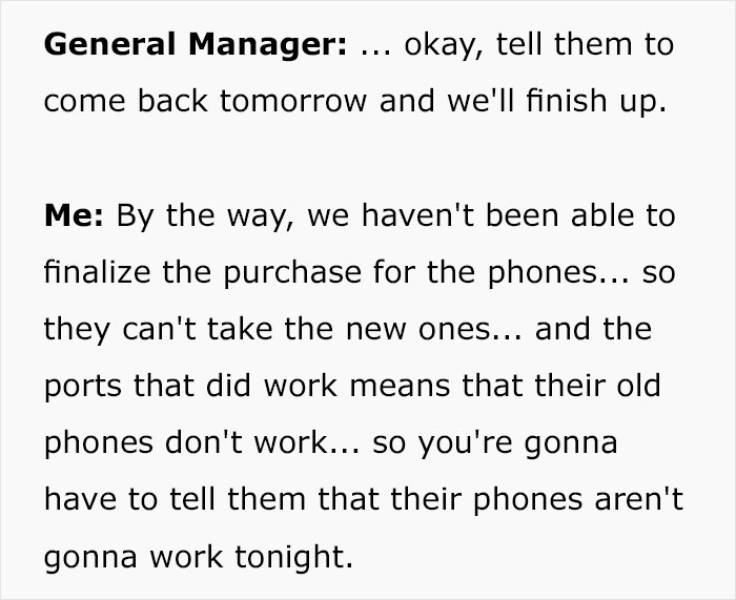 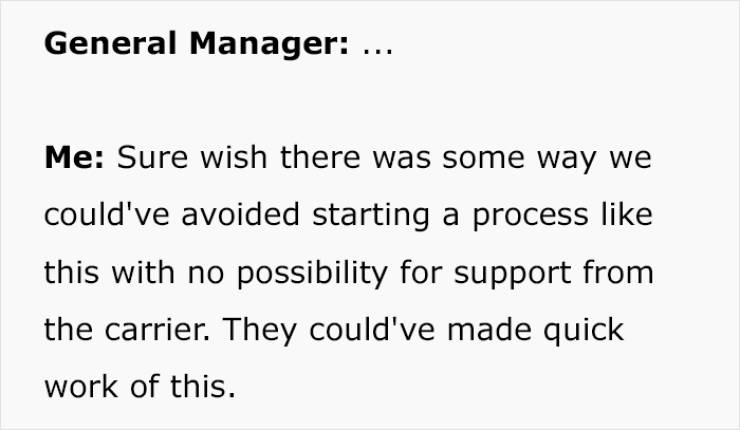 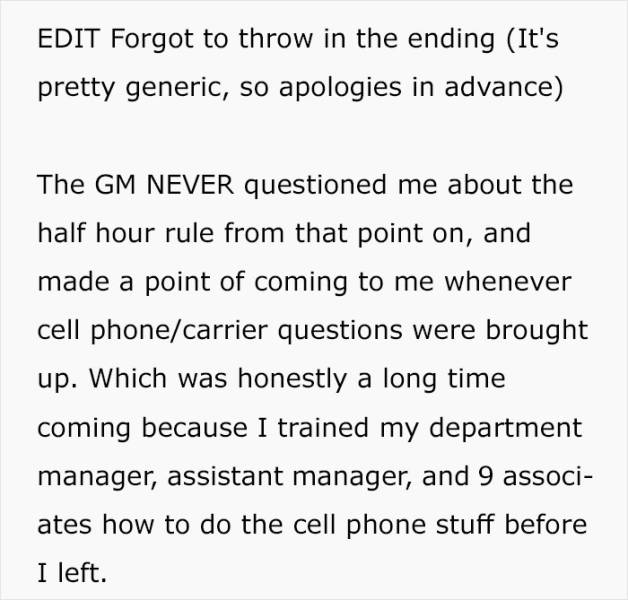 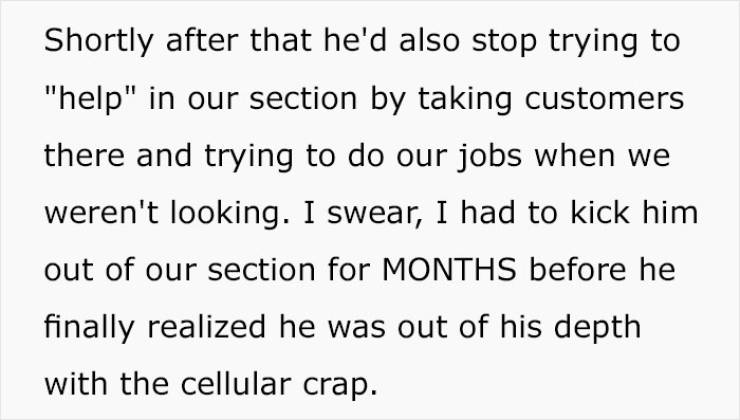 “I assumed the best way to prove a rule isn’t pointless is to demonstrate what happens in the absence of it. I expected he would get sick of the situation and would’ve pulled the plug sooner,” the redditor told us the motivation behind their actions.

According to Baileythenerd, the management at any company “isn’t always an expert in your job or area of expertise.” That’s why it’s not a bad idea to periodically remind it of this fact: “The best way to remind them of this is to (in a controlled situation) either give them the reigns or show them what happens if your job is done improperly by following their demands. An ‘I told you so’ moment is a powerful way to get a point across.”

We were also curious to find out Baileythenerd’s thoughts about why some people, in general, think that they know better than individuals who are experts in their fields. “People often assume the chain of command is also a chain of expertise. This happens as often with management as it does with customers.”

“The thing to remember, as the expert, is that these people are initially coming to you for your expertise,” the redditor said. “Be firm in the fact that you’re the expert (don’t be mean or rude, but) don’t leave any doubt for the customer/manager where you have no doubt. If they want to go against your advice make sure you emphasize that it’s their decision to do so.”

Unpaid overtime is a similar problem

The story raises a very important question: how should we react when our bosses ask us to start working on something that will result in several additional hours of overtime?

An old friend of mine once told me that being brazen and straightforward is the right response. That means that when you’re asked to work in your spare time, you ought to ask how you’ll be compensated for all of those extra hours. But what if your boss wants you to work for free after you’re done for the day?

Well, Kevin Tucker of C-Cubed Consulting suggests that you should first consider that your employer hasn’t even thought about the legal ramifications this might have! Familiarize yourself with your country’s labor laws and the contract that you signed when you started working at the company, then talk to your boss openly. Honesty is always better than hiding in a corner and whining because you’re scared of ‘making waves.’

Meanwhile, Krisanne Elsner of Fishel Bocker & Elsner HR Associates notes you ought to find out the company policy for overtime ASAP. And if you have suspicions about being taken advantage of, talk to your boss about officially clocking in/out earlier/later so as to take into account any extra tasks you’re asked to take care of before or after your official work hours.

There’s nothing wrong with wanting to be paid fairly and correctly for your efforts. But keeping your dignity requires a whole bunch of courage, grit, and a willingness to stand up to your superiors. That involves being polite but firm when saying “no” to working overtime for free.

If you find yourself in a situation where you couldn’t say “no,” keep track of all the extra hours that you work and present them as evidence to HR. Obviously, this isn’t as dramatic as what redditor Baileythenerd did with their GM, but it ought to work just as well.

Selected 5 month s ago
Boy you sure showed him! *Yawn*
Reply