Many Movies Tried To Repeat “Die Hard” Success, Not Many Managed To… (16 pics) 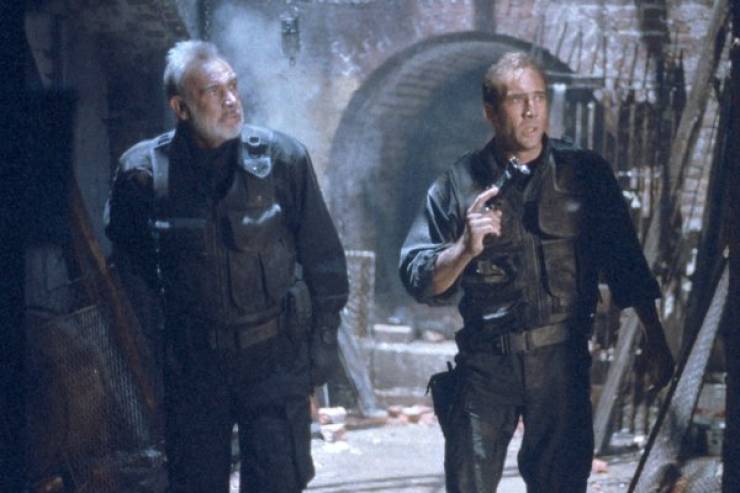 With Nicholas Cage’s Dr. Goodspeed as our everyman in the wrong place/wrong time, and Sean Connery as the badass committing the ultra-violence, it’s got potential. Especially as a Michael Bay film.

Except it takes a while to get going into it’s Die Hard mode, and the villain isn’t as unsympathetic and villainous as Hans Gruber. In fact, former Marine Frank Hummel is only trying to do what he thinks it right.

It’s a great action film, but it’s no Die Hard.

Die Hard on a bus 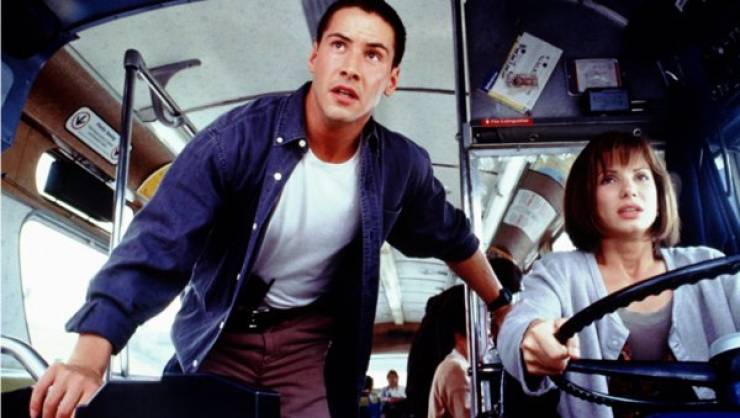 Technically, it’s also kind of DH on an elevator and on a subway train, but the bus is the main thing. Keanu’s Jack Traven is pretty unflappable as our hero trapped on a speeding bus. In fact, sometimes he seems too-Keanu about things. I liked John McClane because he got pissed off about stuff, you know?

As for the bad guy, Dennis Hopper’s mad bomber is a lot more demented than Gruber, but this film is more of a road trip flick, than a ‘trapped with the bad guys’ movie.

Die Hard on Air Force One 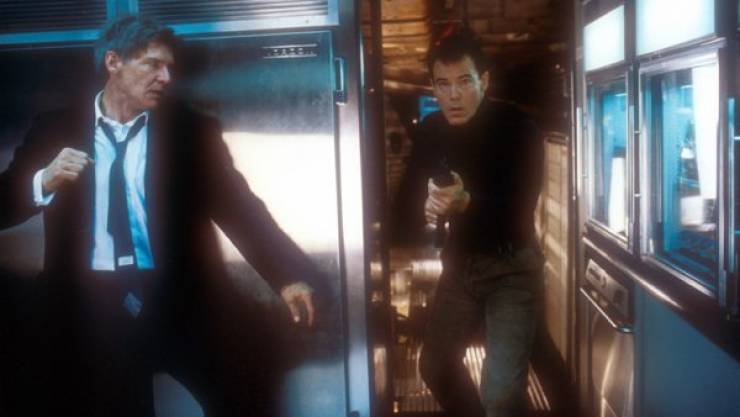 I’m all for Harrison Ford kicking some ass single-handedly, and doing his patented angry point. But, it’s also a generic Harrison Ford film, with an equally generic Russian villain.

Again, a fun action film, but it doesn’t even come close to dying hard enough.

Die Hard in an airport 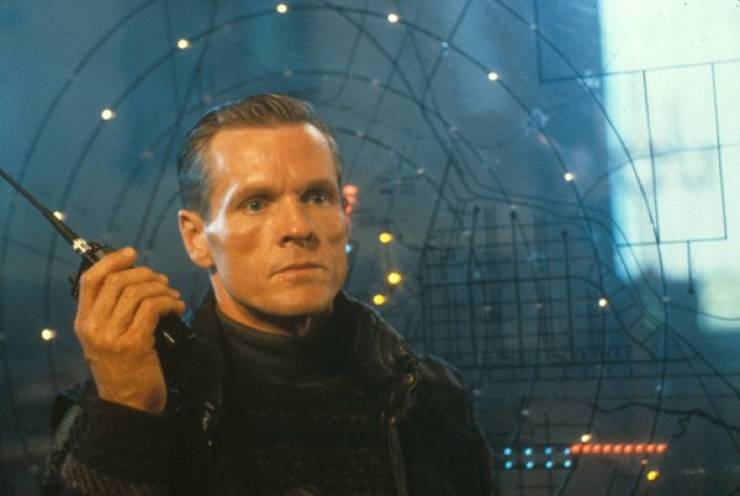 I mean, this has to be here, because it’s the sequel. And while I really and truly enjoy it because it’s more John McClane, it’s not claustrophobic enough.

Nakatomi plaza was so taught and suspenseful, and this airport just seems too big to really make me worried about John.

But kudos to William Sadler’s rogue Col. Stuart. I liked him.

Die Hard on a battleship 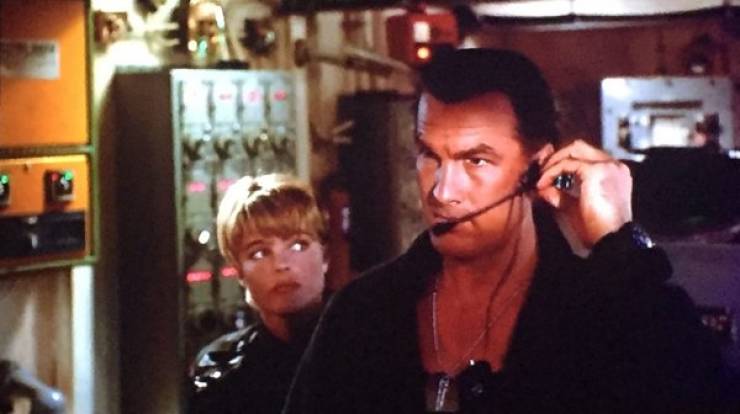 This one is technically cheating the formula, as Casey Ryback isn’t just a regular guy, or even a cop with some training. He’s a [email protected]#king Navy SEAL, who’s now a cook. But, it does keep to the “evade the bad guys in a contained space” formula, and Tommy Lee Jones is just awesome as the evil CIA guy.

What this one has, that Die Hard was lacking, and I’m not ashamed to admit it, is a naked Erika Eleniak. That really elevates this one.

Die Hard in the White House 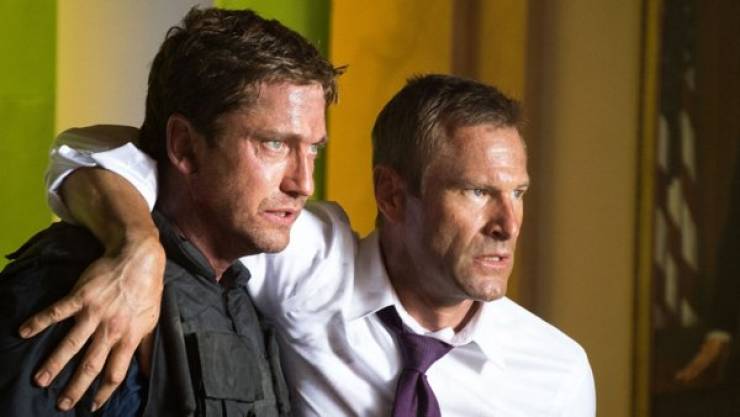 Our everyman here isn’t really one, but I’m choosing to ignore that, because he’s Gerard Butler. Sure, he’s a former Army Ranger and current Secret Service agent, but being trapped in the White House and trying to protect the President is a pretty cool concept.

Too bad the sequels bombed so hard. 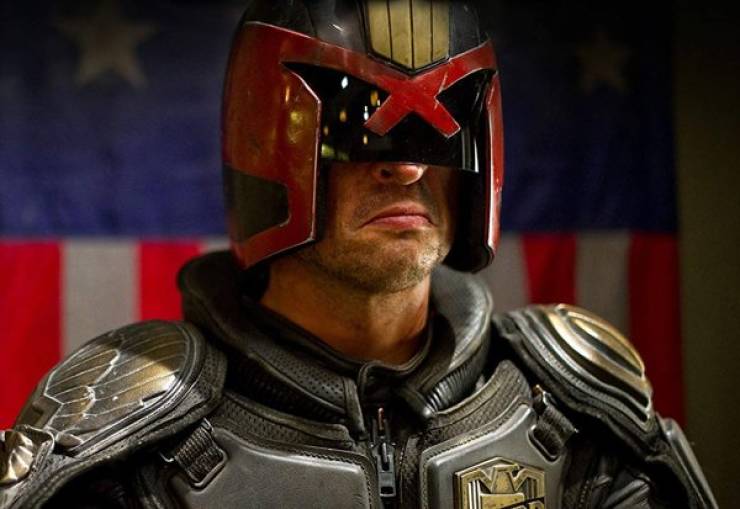 If there’s anything as awesome as Die Hard for a one man assault on bad guys, it’s this one. It’s a travesty that this movie’s not getting a sequel, and that it was unfairly compared to The Raid. Both were in production at the same time; independently.

The only thing that makes this less of a Die Hard rip off and more of it’s own thing, is that Judge Dredd is a certified fascist badass with a big gun. 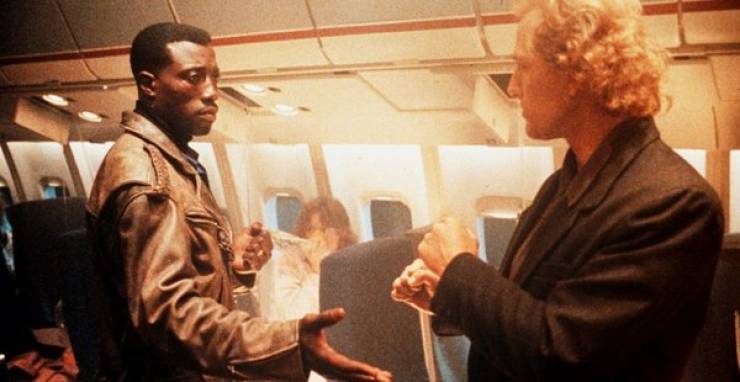 Wesley Snipe’s ex-cop/ex-Secret Service is probably the closest analogue we get in this list to John McClane, and it’s one of Snipes’ best action roles aside from Blade and Demolition Man.

What made this film challenging was that the villain wasn’t all that unique or compelling, and there aren’t really a lot of places to hide on a commercial plane. He does ok, though. 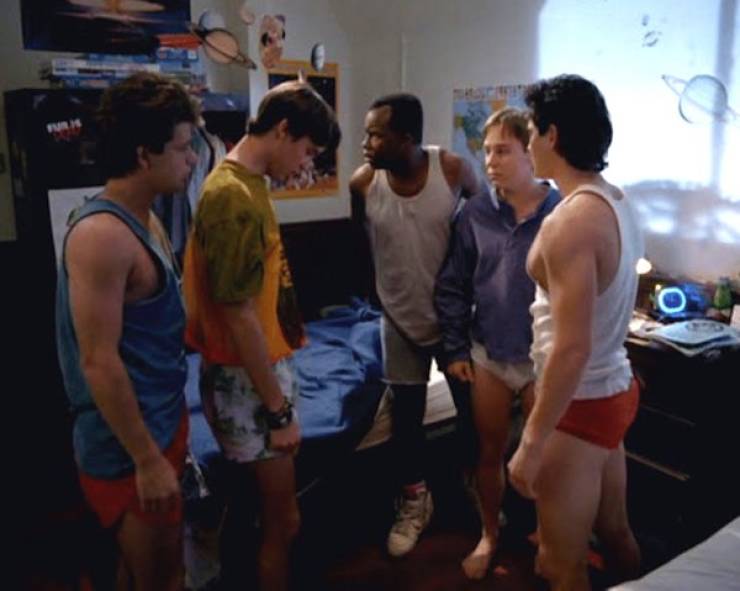 Remember this one? It’s got Sean Astin and Will Wheaton fighting Colombian terrorists in their underwear. Astin does ok, but he’s definitely not on the same calibre as the rest of the action heroes on the list.

But watching a group of pranksters take on the bad guys is a pretty entertaining Saturday-afternoon-with-a-hangover kind of movie.

Plus Andrew Divoff as the villain really doesn’t get enough recognition.

Die Hard in an Indonesian building 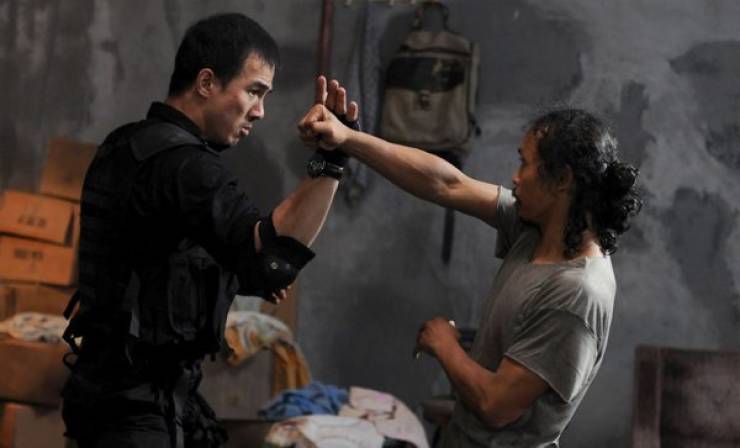 Much like Dredd and Die Hard, there’s law enforcement trapped in a building with the bad guys.

While the fight scenes are intense and the action doesn’t really let you breathe, neither the cop or the bad guy are really memorable or as interesting as McClane and Gruber.

Die Hard in a hockey arena 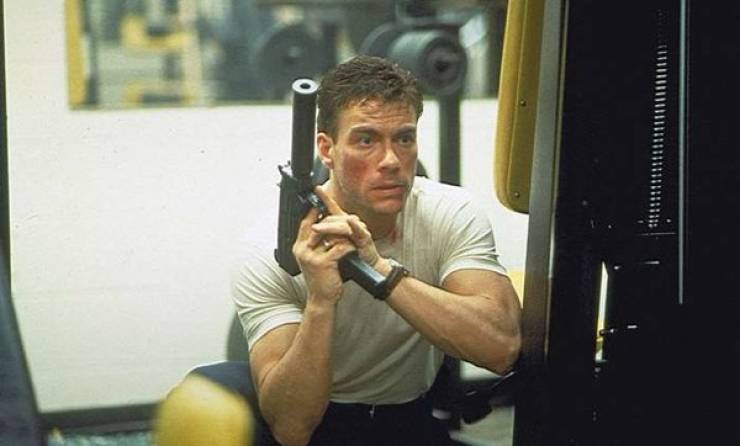 It can’t be a list about Die Hard clones without including this JCVD film. He plays a French-Canadian Fire Marshall who needs to rescue the VP of the United States from a hockey area filled with bombs.

There’s the usual sneaking, trickery and the ultimate fight between Jean-Claude and a dude dressed as the Penguins mascot. It’s not as good as a Bruce Willis film, but this one is highly underrated as a fun watch.

Die Hard on a plane full of poisonous snakes 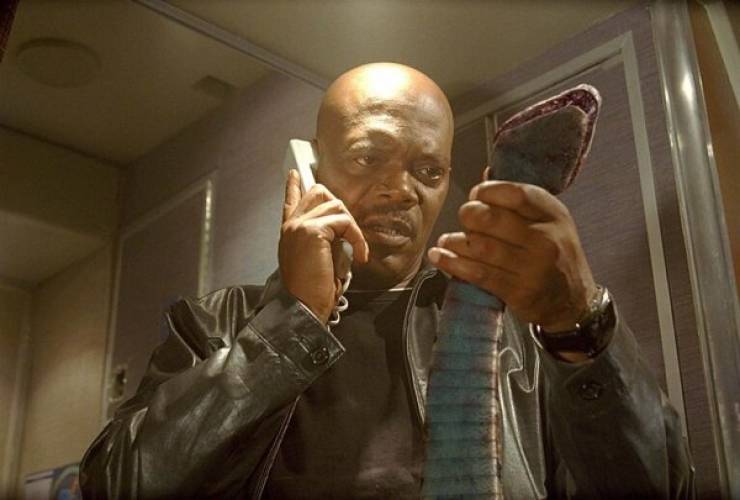 I’m including this because everyone is trapped on the plane with snakes, and it’s up to one man to save everyone.

Die Hard on a train 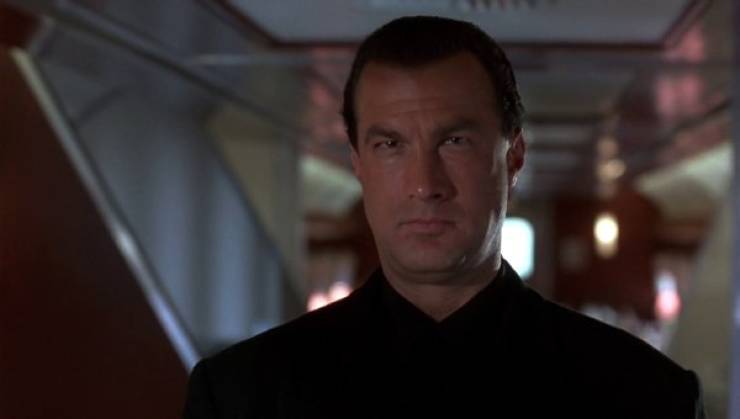 Casey Ryback finds himself on a train with his newly discovered nice, when lo and behold, mercenaries.

The baddie is an insane computer hacker who wants to control a satellite, and it all goes down on a train. It’s good fun, but doesn’t even compare to the original, and is nowhere as awesome as Die Hard. 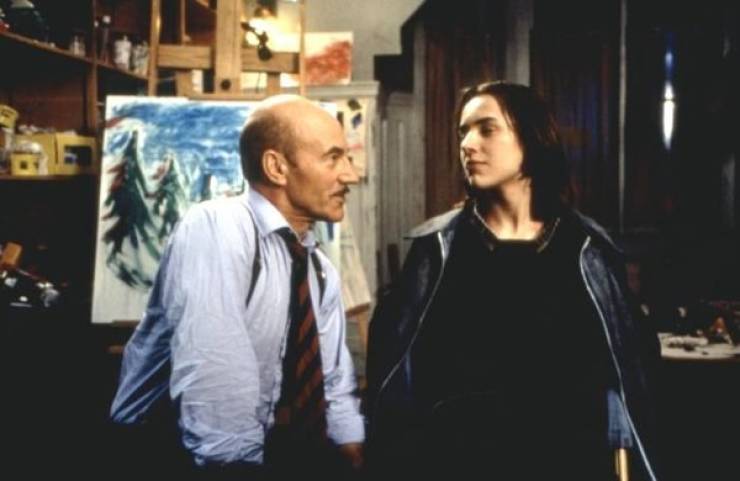 Our hero is Ozzie Paxton, a 90’s skateboarder who’s totally rad. He’s also played by Vincent Kartheiser. He’s up against Patrick Stewart with a moustache.

Stewart’s head of security wants to keep the kids hostage and ransom them off, while Ozzie uses science and stuff to get the school back.

The irony is the film promoted itself as a Die Hard rip off, and it was also filmed at Vancouver’s Hatley Castle, which became the X Mansion 3 years later. So technically, when someone talks about Patrick Stewart and a school for gifted youngsters, they might be talking about this one. Just saying.

Die Hard in a building, but Anna Nicole Smith is the hero 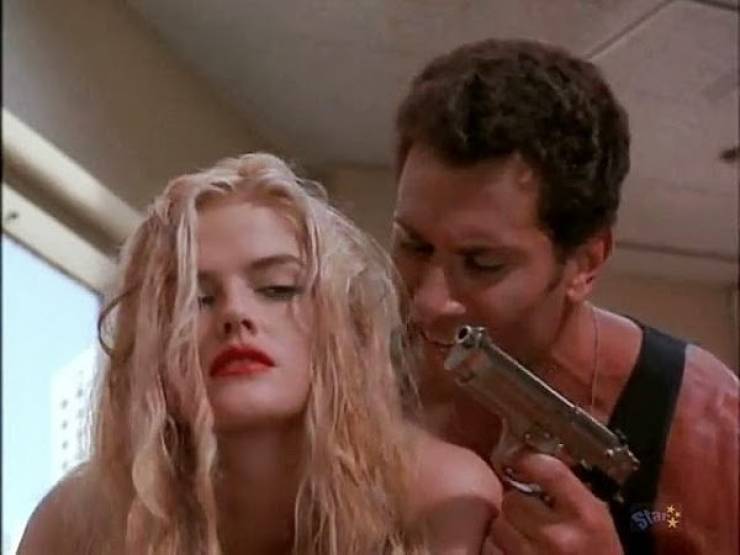 Yep. This direct-to-video film is an intentional Die Hard rip-off and meant to showcase Anna Nicole Smith as naked as possible. True story.

I am not complaining. At. All.

Die Hard on a cruise ship 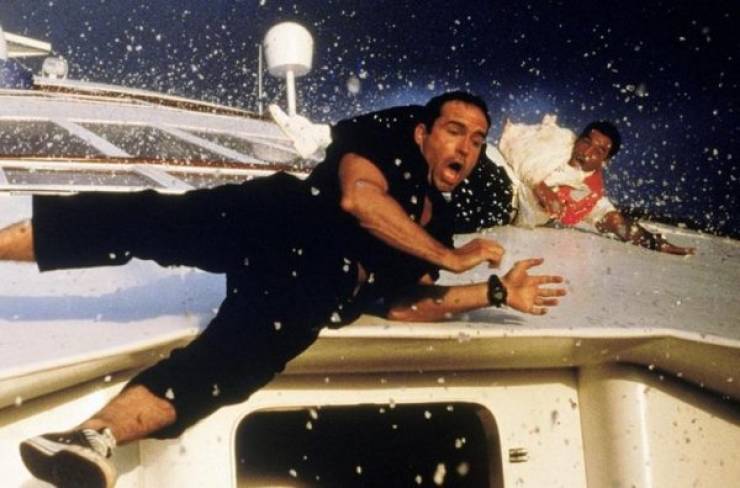 It’s Sandra Bullock’s character, with a different LA cop played by Jason Patric. And a big boat with a lot of hiding places.

Thankfully, at least the villain is entertaining. I don’t think Willem Dafoe can do anything wrong. Other than that, this film sucks.

Child 1 year ago
Who posted this sh#t?
Reply
-1

Back 1 year ago
Judge Dredd the comic came out in 1977,
These movies were not trying to copy Die hard, I agree with Child, who posted this cr#p???
Reply
0

Treasure 1 year ago
who posted them you ask? © Izismile.com, 2019
Reply