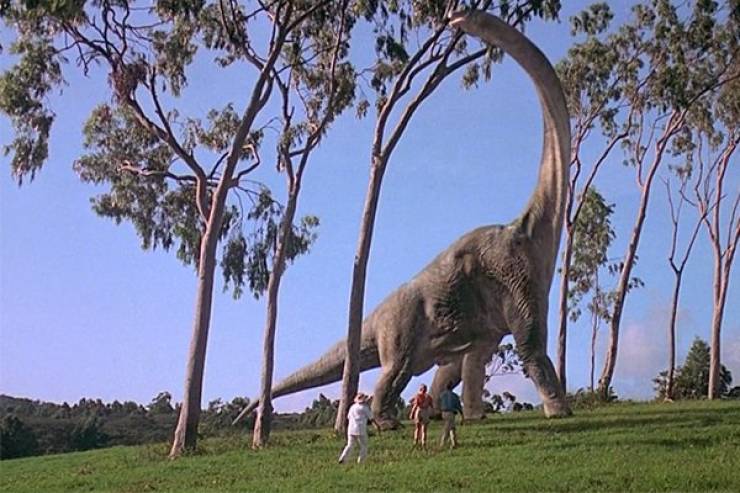 There are only fifteen minutes of dinosaur footage in this movie: nine minutes are animatronics, and six minutes are Industrial Light & Magic CGI. 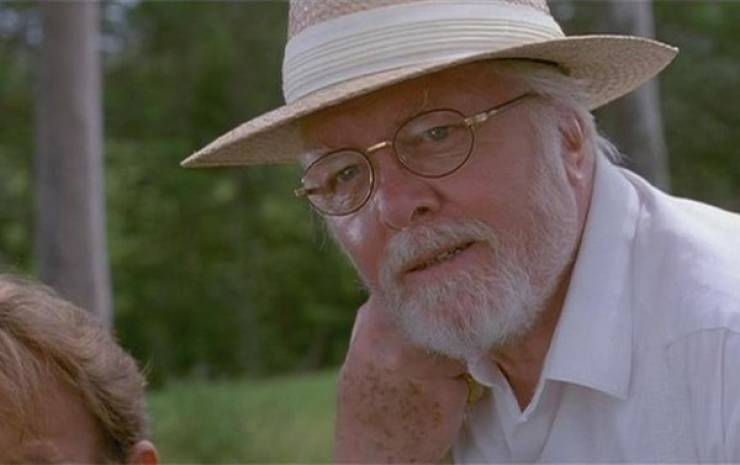 ‘Independence Day’ director Roland Emmerich like Jeff Goldblum’s line “must go faster” from ‘Jurrasic Park’ so much that he had Goldberg say it again in when he and Will Smith escape the mothership in ‘Independence Day.’ 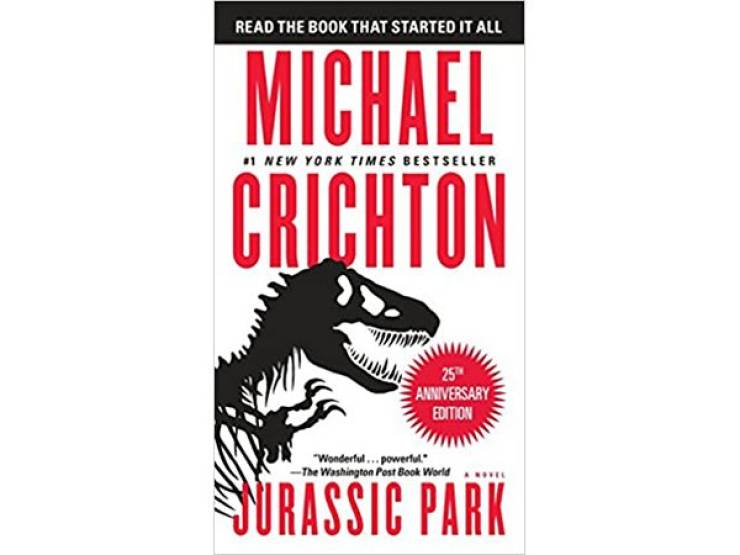 Universal Pictures paid Michael Crichton $2 million for the rights to his novel before it was even published. 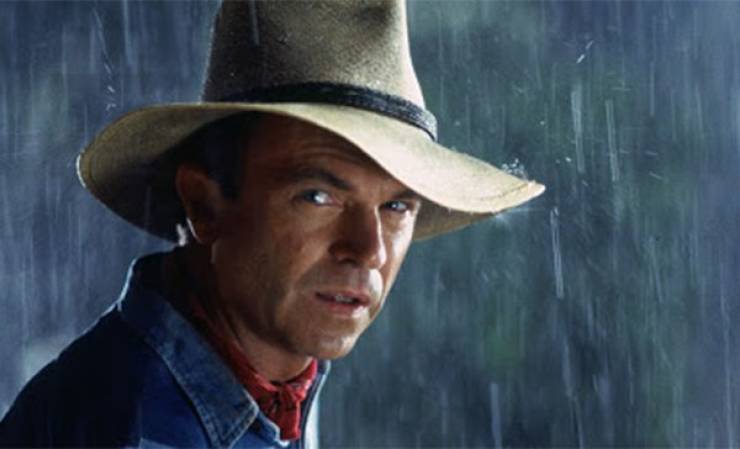 Harrison Ford was offered and turned down the role of Dr. Alan Grant, as he felt that the part just wasn’t right for him. After seeing the movie, he says that he had made the right decision. 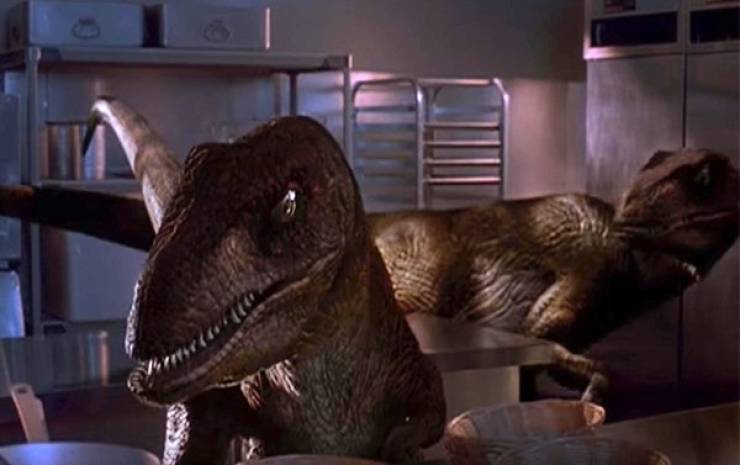 Director Steven Spielberg wanted the velociraptors to be about ten feet tall, which was taller than they were known to be. The largest known raptor at the time was Deinonychus but he wanted it to be bigger and therefore more menacing. Then during filming, paleontologists uncovered ten-foot-tall specimens of raptors called Utahraptors. 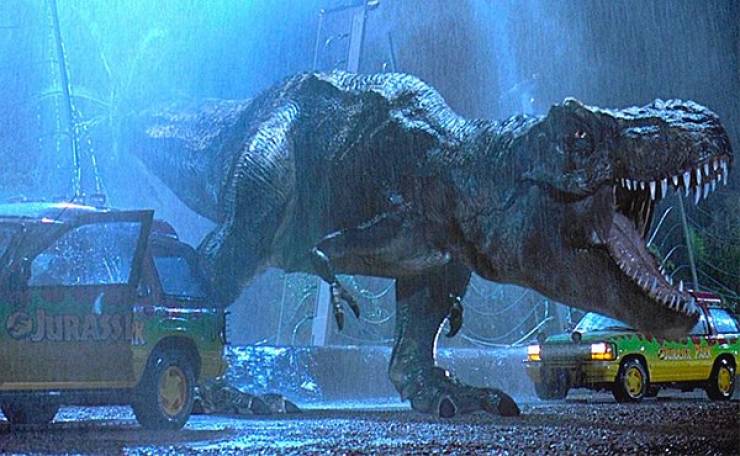 The crew had to have safety meetings about the T. Rex. It weighed 12,000 lbs and was extremely powerful. They used flashing lights to announce when it was about to come on to alert the crew because if you stood next to it and the head went by at speed, it felt like a bus going by. 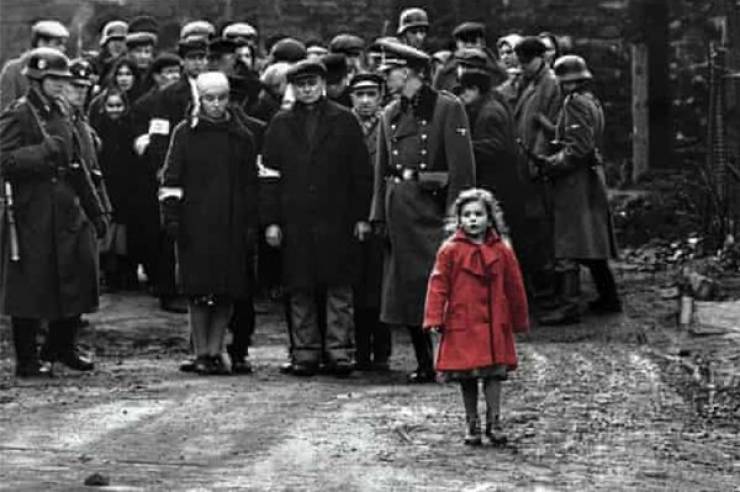 Spielberg oversaw the post-production of the movie via video link while in Poland filming Schindler’s List (1993). He later called it one of the hardest times in his life as a filmmaker: the filming of Schindler’s List took such an emotional toll on him that his enthusiasm for this movie had almost waned. He said that he needed an hour per day to muster up the energy to comment on digital dinosaurs and answer trivial questions from the special effects crew. 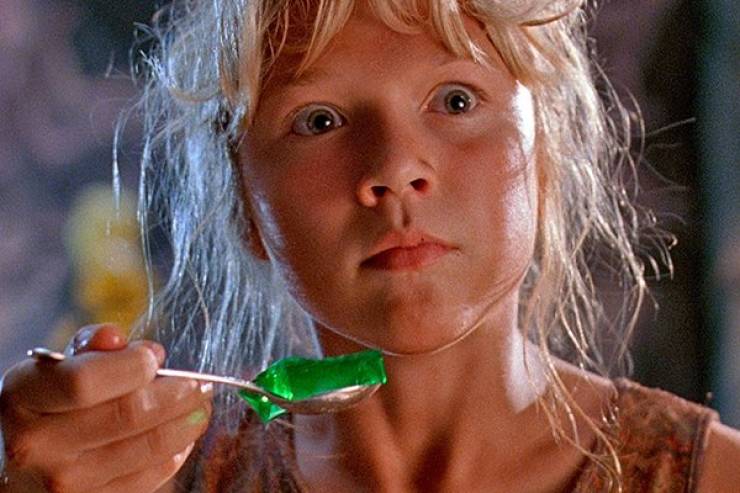 After the movie, Ariana Richards developed a great interest in dinosaurs and assisted Jack Horner, paleontologist, advisor for this movie, and the inspiration for the character of Dr. Grant, on an actual dinosaur dig in Montana the following summer. 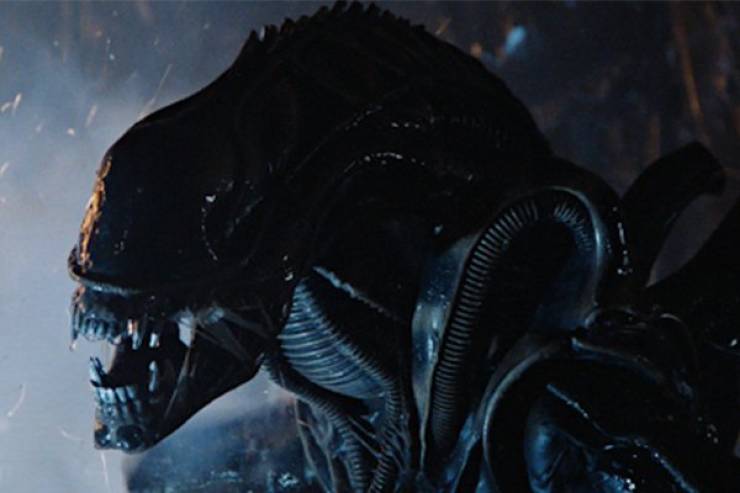 James Cameron has stated that he wanted to make this movie, but the rights were bought “a few hours” before he could bid. Upon seeing it, Cameron realized that Spielberg was the better choice, as his version would’ve been much more violent (“Aliens with dinosaurs”) which “wouldn’t have been fair” to children, who relate to dinosaurs. 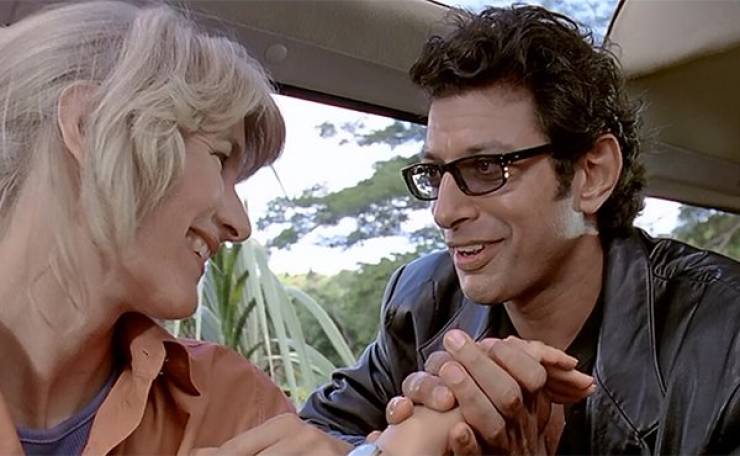 After meeting on this movie, Jeff Goldblum and Laura Dern began a romantic relationship, and were even engaged for two years before breaking up.

You’ve probably heard this fun fact before, but it’s worth repeating that the sounds used for the raptors are actually the sounds of tortoises having sex.

The T. rex’s roar was a combination of a baby elephant’s squeal, an alligator’s gurgling, and a tiger’s snarl.

And the T-rex’s breath was the sound of air escaping a whale’s blowhole. 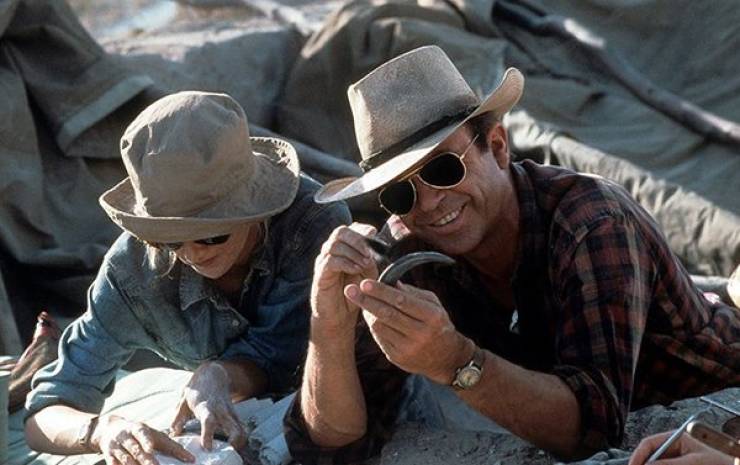 This movie and the book generated so much interest in dinosaurs that the study of paleontology had a record increase in students. 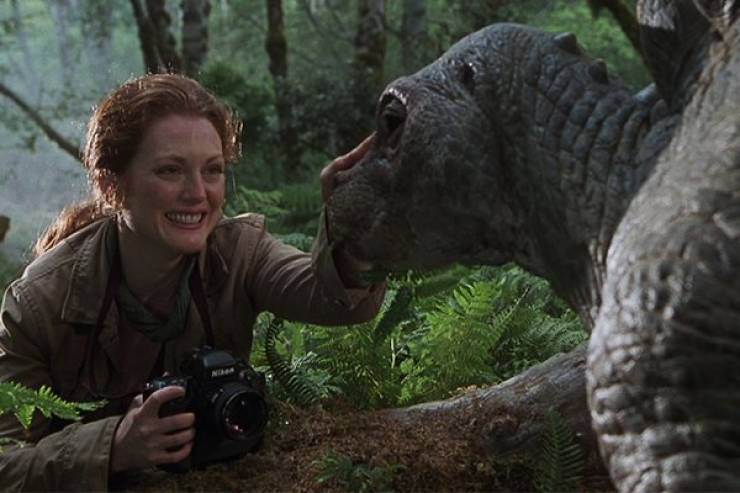 Julianne Moore admitted that she did ‘The Lost World: Jurassic Park’ to pay off a divorce settlement, and to work with Steven Spielberg. 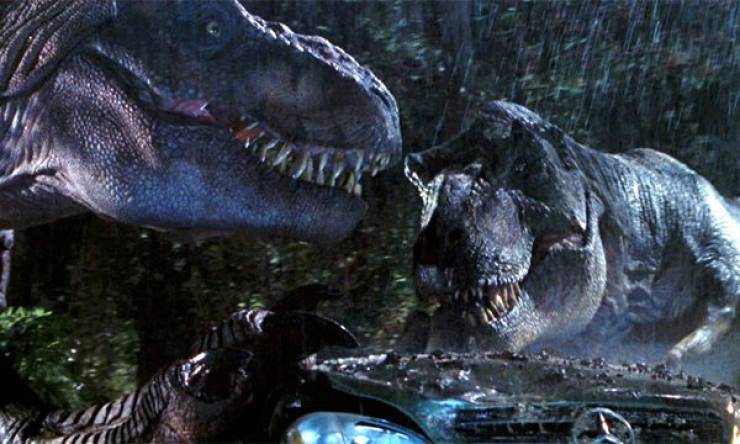 There is roughly fifty percent more dinosaur action in the sequel ‘The Lost World: Jurassic Park’ than in the original. 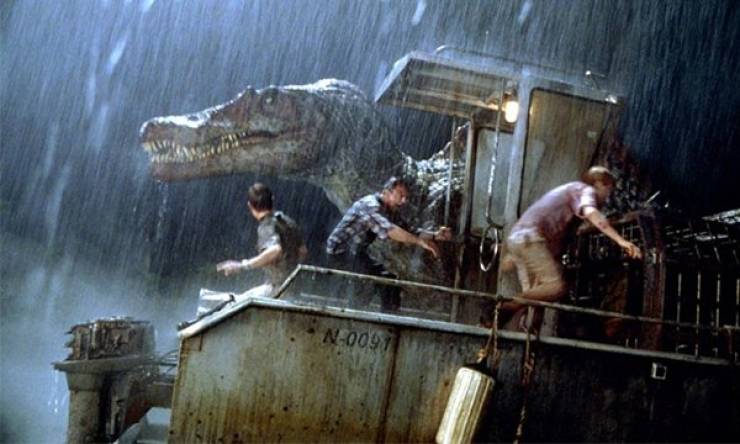 ‘Jurassic Park III’ borrowed leftover ideas from the first two movies that got cut, including the riverboat scene and the pteranodon scene.

Ariana Richards’ audition consisted of standing in front of a camera and screaming wildly. Spielberg “wanted to see how she could show fear.” Richards remembers, “I heard later on that Steven had watched a few girls on tape that day, and I was the only one who ended up waking his sleeping wife off the couch, and she came running through the hallway to see if the kids were all right.” 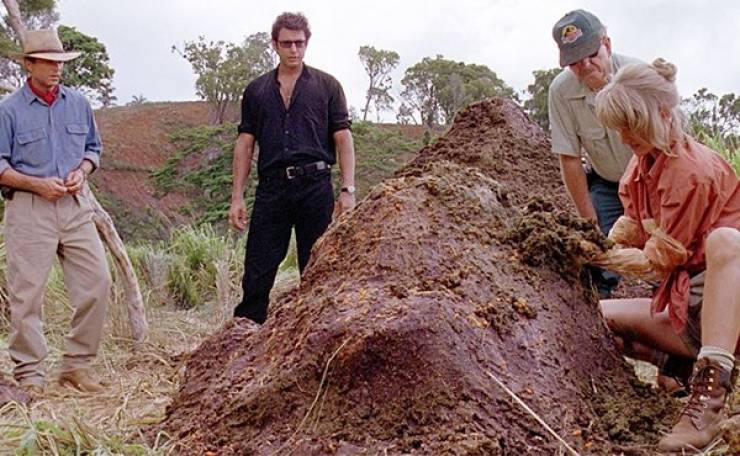 The Triceratops dung made of clay, mud, and straw. It was drizzled in honey and papayas so flies would swarm near it. 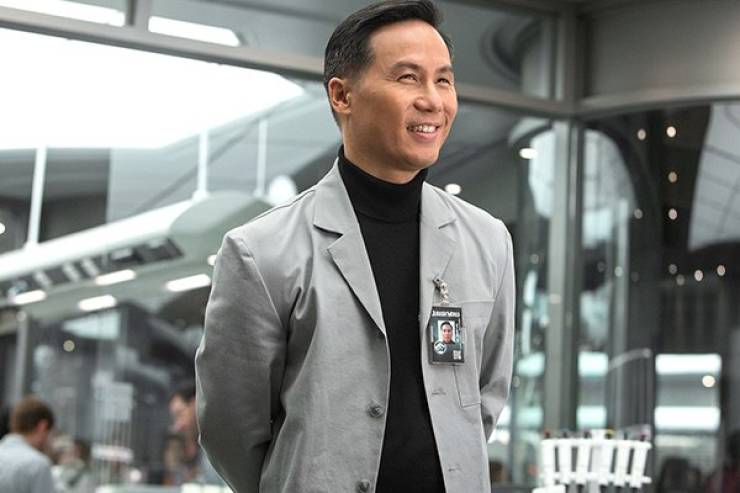 B.D. Wong may have had less than two minutes of screentime, but he was the only cast member to reprise his role in Jurassic World (2015). Wong and Jeff Goldblum reprised their roles in Jurassic World: Fallen Kingdom (2018).

The iconic cup scene was made by someone laying under the car and plucking guitar strings to make it shake. They had to try countless chords on a guitar to create the effect they wanted. 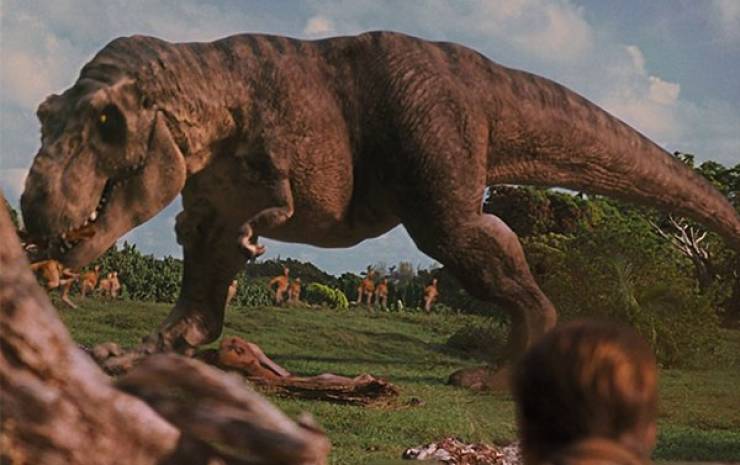 The T. Rex occasionally malfunctioned, scaring the crap out of the crew. Producer Kathleen Kennedy recalls, “The T. Rex went into the heebie-jeebies sometimes. We’d be, like, eating lunch, and all of a sudden a T. Rex would come alive. At first, we didn’t know what was happening, and then we realized it was the rain. You’d hear people start screaming.” 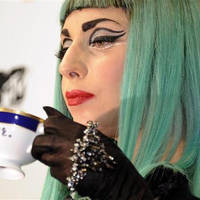