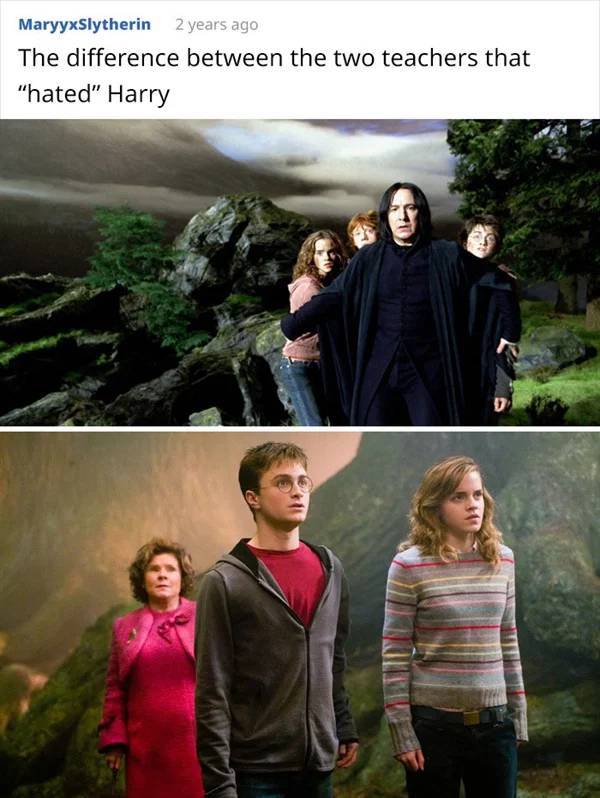 Even when you’re undercover and supposedly ‘hate’ a certain student… your natural instincts kick in! 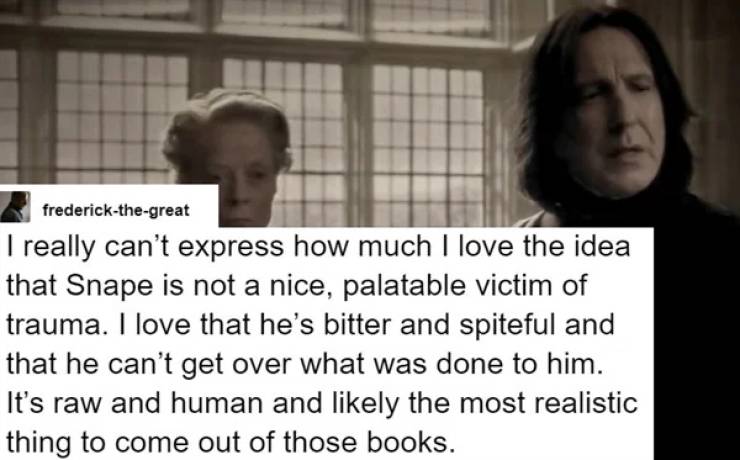 In a series about wizards and magic and all things fantasy… Snape seemed to be the most ‘human.’ At least according to this deep thinker. 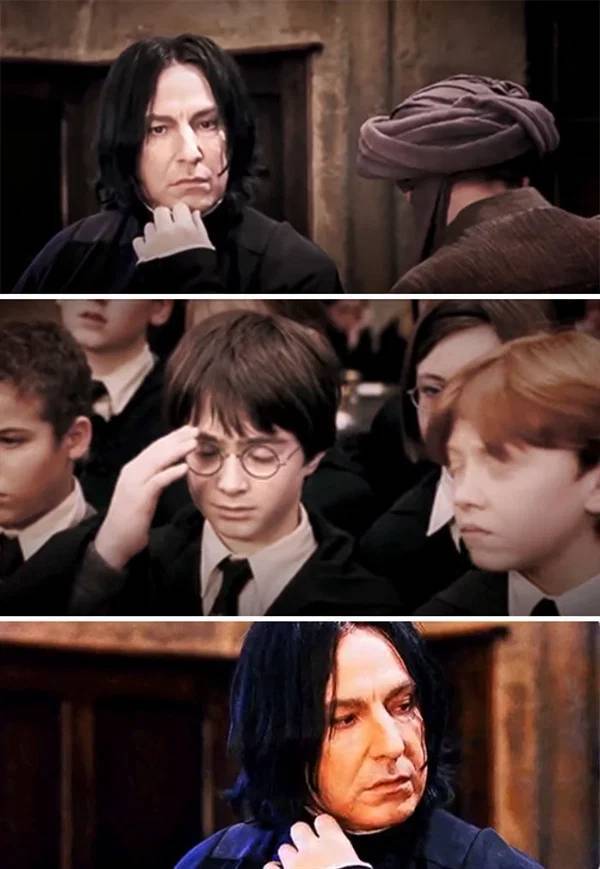 When Snape and Harry first make eye contact, Harry’s scar starts burning. As it so happens, this moment is also the one in which Professor Quirrell has Voldemort’s face pointing in his direction.

Now, Snape notices that Harry’s scar is burning, and he then looks right at Quirrell and begins to suspect that he may be working with the dark lord.

In the scene where Snape dies, a Gryffindor scar is seen hiding in the background. This is likely a reference to the line in the books in which Dumbledore says to Snape: “Sometimes I think we sort too soon.” 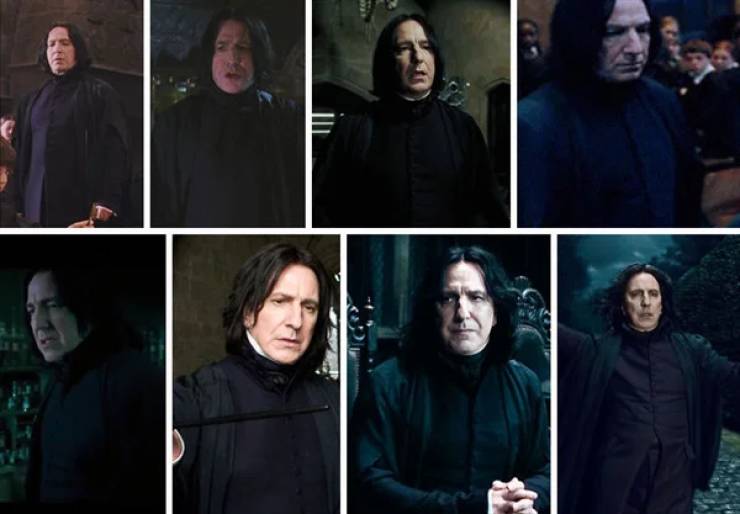 Snape is the only character to have zero changes to his wardrobe throughout the entirety of the film series. Alan Rickman also had a lot of say in his character’s outfit: “Rickman felt that he needed a lot of buttons, because, in his mind, he saw Snape buttoning up when he developed the character. He also wanted the sleeves to be tight. He realized that the whole look was essential to the character’s completeness.” 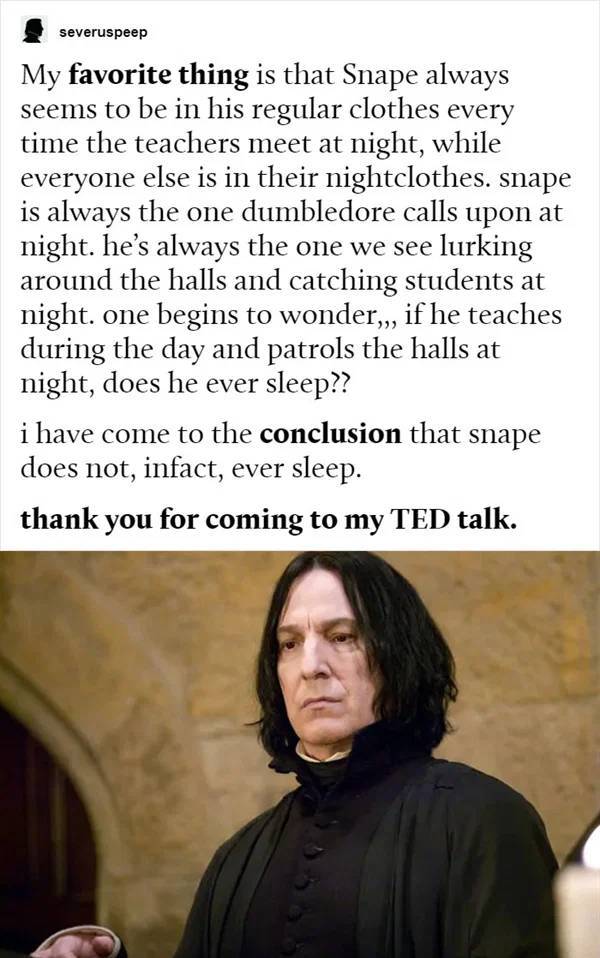 There’s a solid point here… Snape is never seen not wearing his classic black coat, no matter what time of night it is.

Snape had known about the fact that he had to kill Dumbleore for an entire year before it happened. With this he knew that he would become one of the most hated people in the wizarding world. The worst part is that, in order for the plan to succeed, he had to keep it all a secret. What a sacrifice. 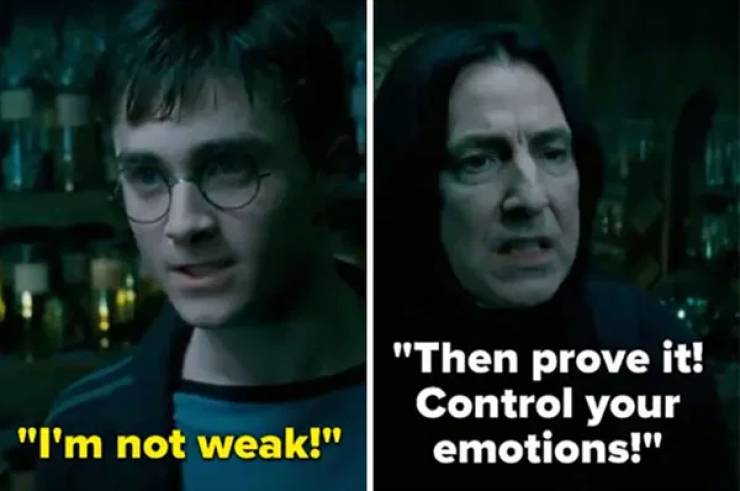 When Snape is teaching Harry Occlumency, he says a lot of mean (and likely true) things about his dad. While watchers must’ve been thinking “what an asshole,” upon further inspection it seems that he is really just proving a point that Harry would be incredibly vulnerable against Voldemort if he didn’t prepare properly.

When Harry is chasing Snape and the other Death Eaters after Dumbledore’s death, Snape makes the others go on without him, because he knew they would want to hurt Harry. He then leaves Harry alive when he could’ve easily captured or killed him.

When Snape kills Dumbledore, you can see the clear hesitation and sadness in his face. His voice is incredibly shaky when he casts the spell, too. Also, he didn’t cast the spell until Dumbledore begged him to by saying “please.” Clearly, watchers were meant to think that Dumbledore was begging to be spared, but obviously that wasn’t the case. 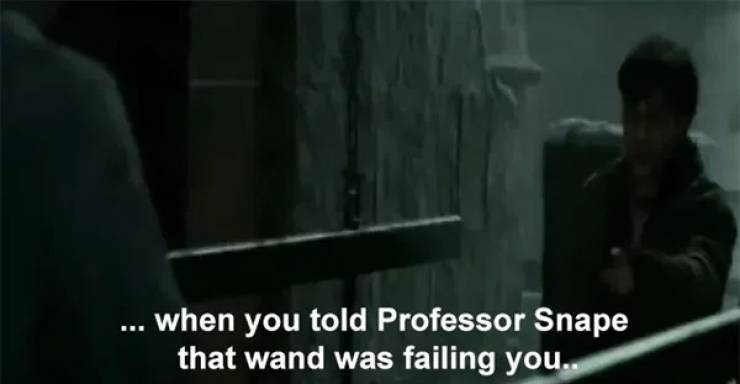 Throughout the series, Harry refused to call Snape a professor. It wasn’t until the final film after he learns the truth about Snape that he finally calls him “Professor Snape.”

When Mcgonagall starts fighting Snape in the last film, he purposefully re-directs her spells to take out the two death eaters behind him so that they wouldn’t attack her when he apparates away. 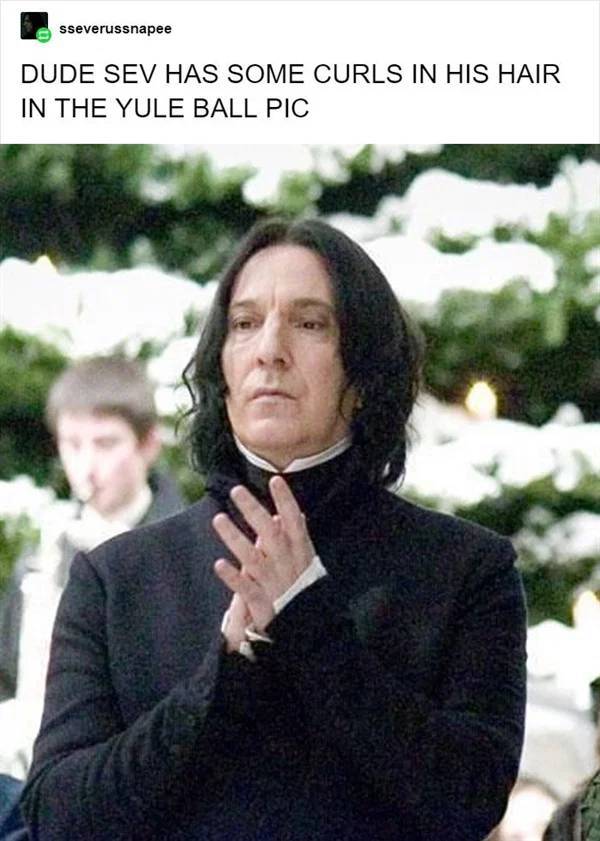 Apparently Snape did his hair for the Yule Ball! 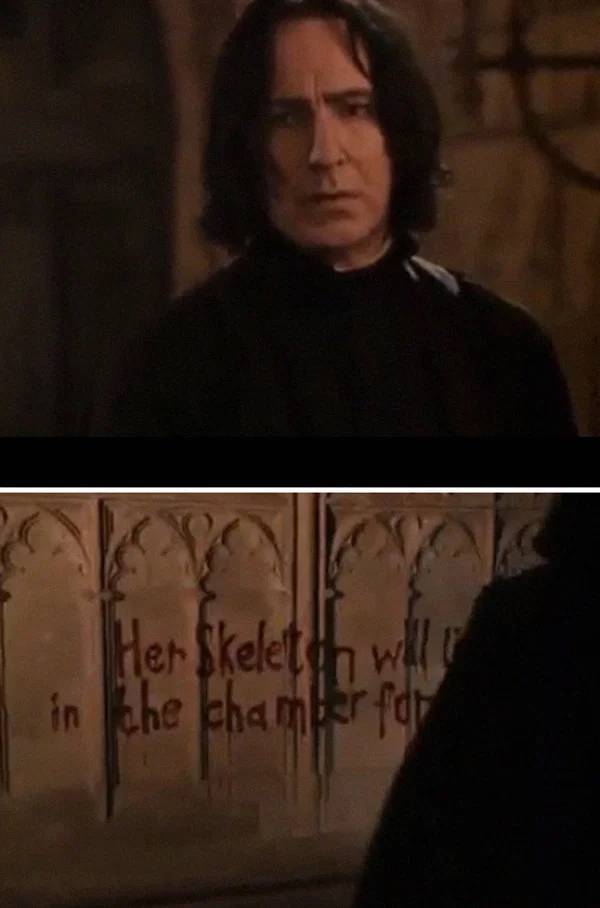 When Mcgonagall says that Ginny had been taken into the Chamber of Secrets, Snape looks genuinely concerned. C’mon, he ain’t a bad guy! 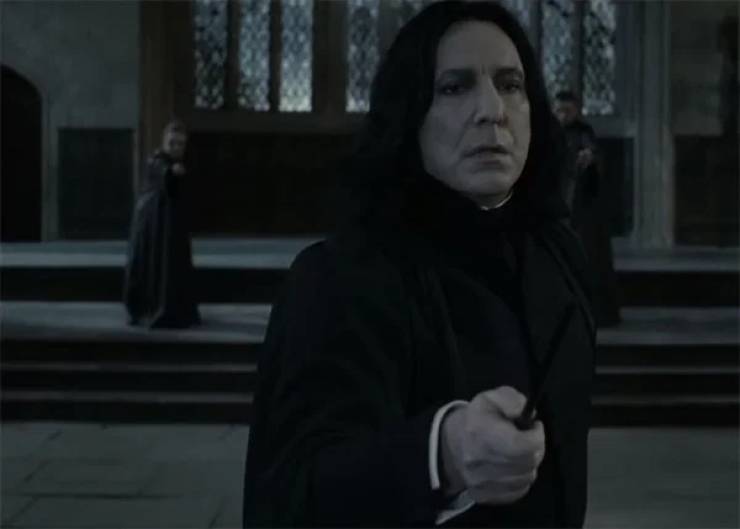 When Mcgonagall steps forward to duel with Snape, he clearly lowers his wand at first, presumably out of shock. It has been proven throughout the series that he, Dumbledore, and Mcgonagall were close friends.

However, he still couldn’t help but [email protected]#k with Ron, Harry, and Hermione. He’s only human, after all!