Her heartbroken owner, Janet Adamowicz, searched high and low for a year before finally giving up. But then, 13 years later, she got a call out of the blue from a vet 40 miles away.

“I thought it was weird, but I couldn’t believe it when I got to the vets and they had her there and she still remembered me”

“I don’t know where she had been, I think possibly a stray but kept being fed by strangers or catching her own food”

"Lost My Cat One Year Ago, Got A Call Yesterday From The Animal Shelter Saying They Have My Kitty. Microchips Work"

"Update! Syd is adjusting beautifully. He's back to purring and making muffins on my arm. Things couldn't be better!"

"My Cat Went Missing A Year Ago. Me And My Wife Found Him While On A Bike Ride. He Came Running Right To Us Crying And Now My Whole Entire Year Has Been Made!" 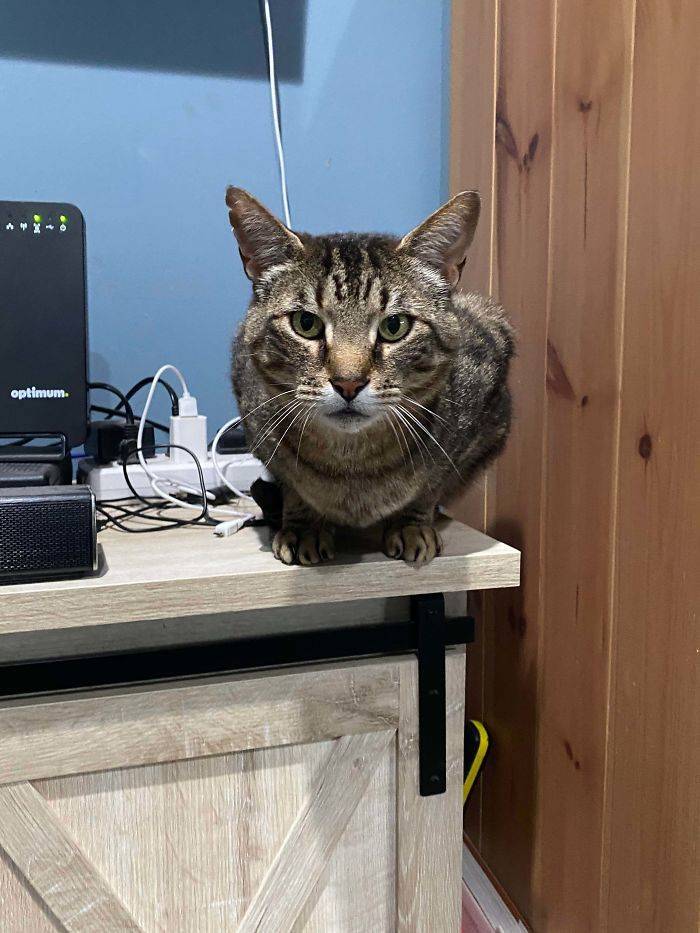 "It really is the greatest feeling finding a pet that has gone missing. To be honest me and my wife came to the conclusion that he passed after a couple months of being missing. What a relief now!" 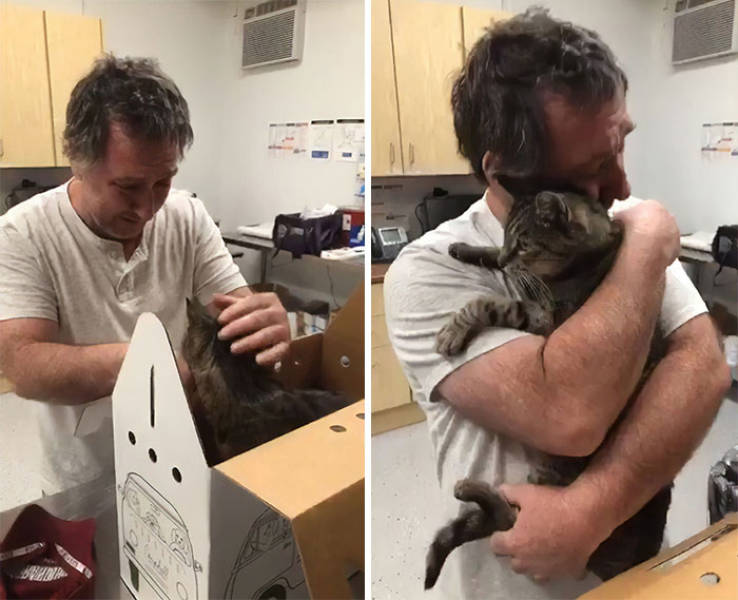 The adorable cat went missing years ago, right before Robert was planning on moving from California to Ohio. The devastated owner decided to ditch his plans and stayed in California for the whole year looking for his missing pal.

“I remember at one point I was praying and I said, ‘God, I’ll do anything, just bring my Chebon back,’” Robert said in a video posted on the Ventura County Animal Services. The cat seemed to have disappeared forever and Robert had no other choice than to move on.

Then 7 years later, a woman spotted a cat who looked ill, so she decided to catch the animal and take him to the vet. Luckily, the cat she found had a microchip, and in an instant, they knew who is the owner of the 19-year-old cat who had been living in the streets for years. That’s when Robert received a call saying that his cat was alive.

After finally seeing the cat, Robert immediately recognized his buddy and burst into tears. After all these years, the two friends were back together. The touching moment was captured by the animal shelter and instantly went viral, leaving so many people in tears. 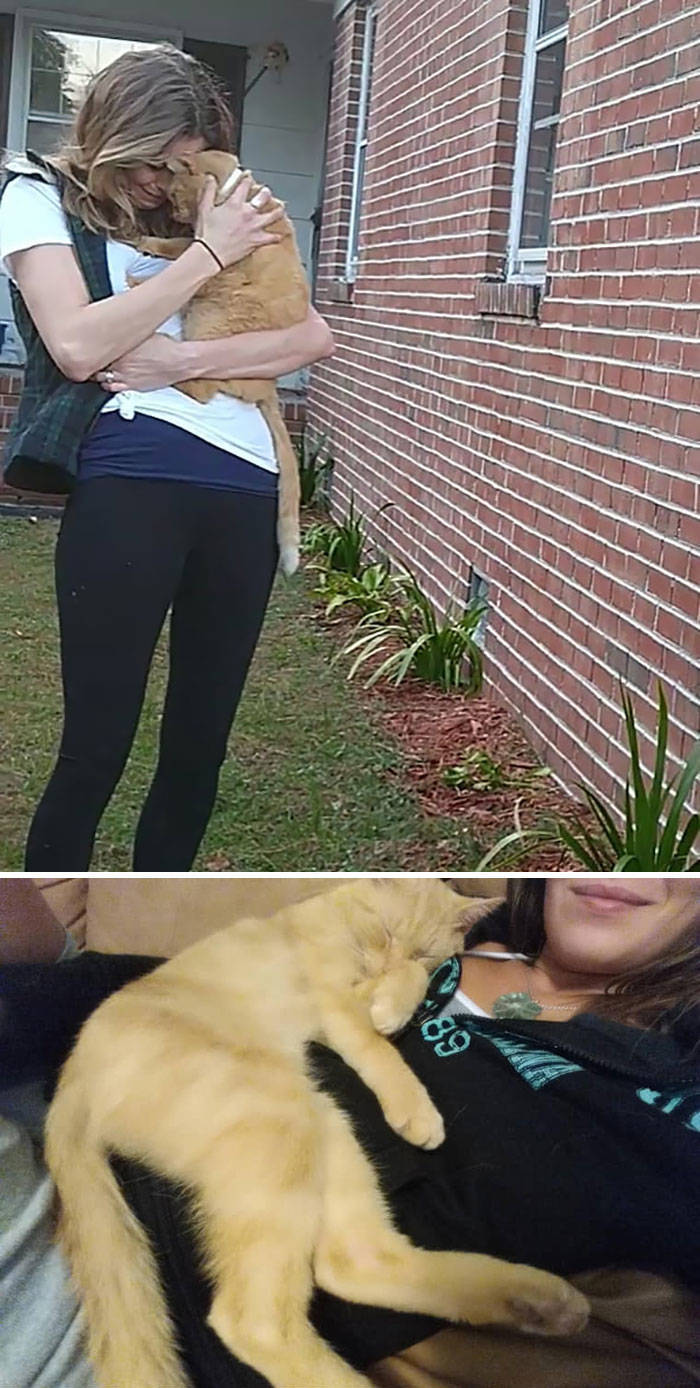 This cat named Cat was missing for 536 days. His owners were worried sick and were starting to lose hope. When one day they got a voicemail from animal control. Turns out, a man was taking care of Cat for a whole year. When Mindy drove to the man’s house, she was met by Cat who instantly started purring after seeing her.

"My Friend Just Went To Pet Cats At Our Local Animal Shelter, And Found Her Cat That Had Been Missing For Over A Year" 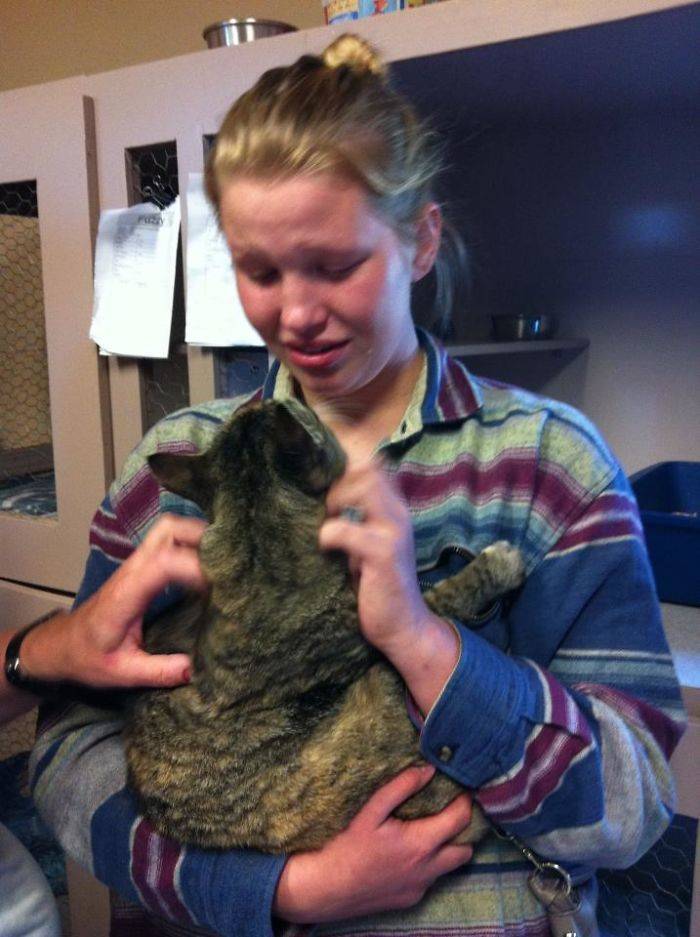 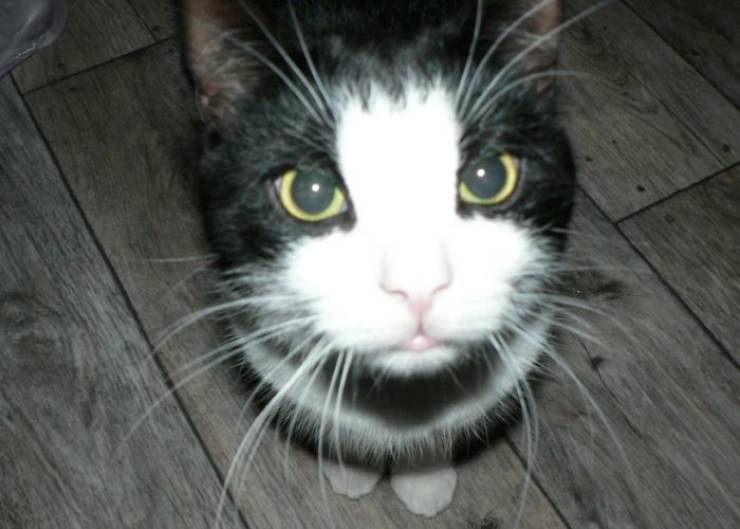 "I was walking my Chorki (Chihuahua Yorki mix) when Ozzy walked over and mewed at me.

Ozzy was the only cat that would respond to his name by running to me. So I called it to see if it was him. It was."

"Four Years Ago My Beloved Cat Moose Went Missing. Yesterday, A Kind Family Who Had Been Feeding Him Recently Finally Took Him To Check For A Microchip" 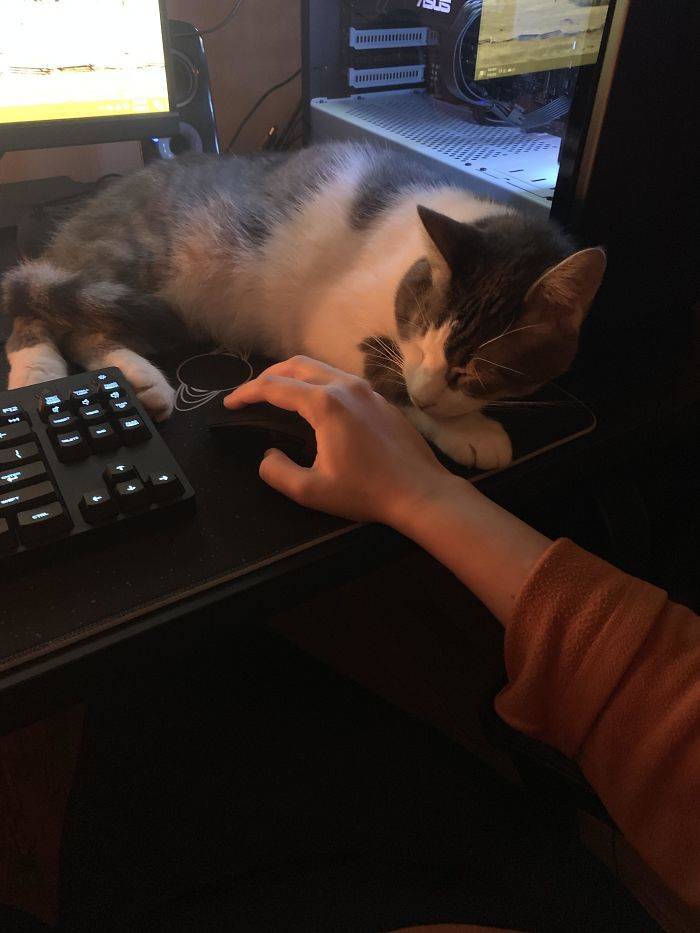 "The family who contacted had only been feeding him for a week or two. Not sure what his four years prior to that looked like but he was found pretty far from where he was lost so I assume that he moved with a family at some point and then either escaped or was left or what have you. Also he's much fatter than when I knew him so I have to believe he was a house cat "

"11 Years Ago My Cat Went Missing And Today He Returned!" 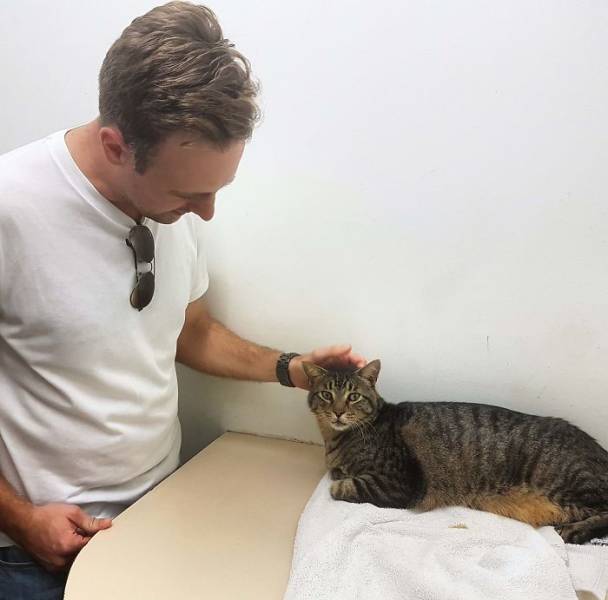 "I'm so pumped to see this guy again. T-Shirt, named after the character from the T-Bag tv series, apparently has been living around an apartment block being fed by the lovely people that live there. One of the residents brought him in after he was injured and wanted to get him fixed and look after him. As much as I wanted T shirt back, the guy and the cat have been together for so long so I agreed with his request to let him own the cat... with visits allowed lol. If you find a cat, get a vet to scan the chip!" 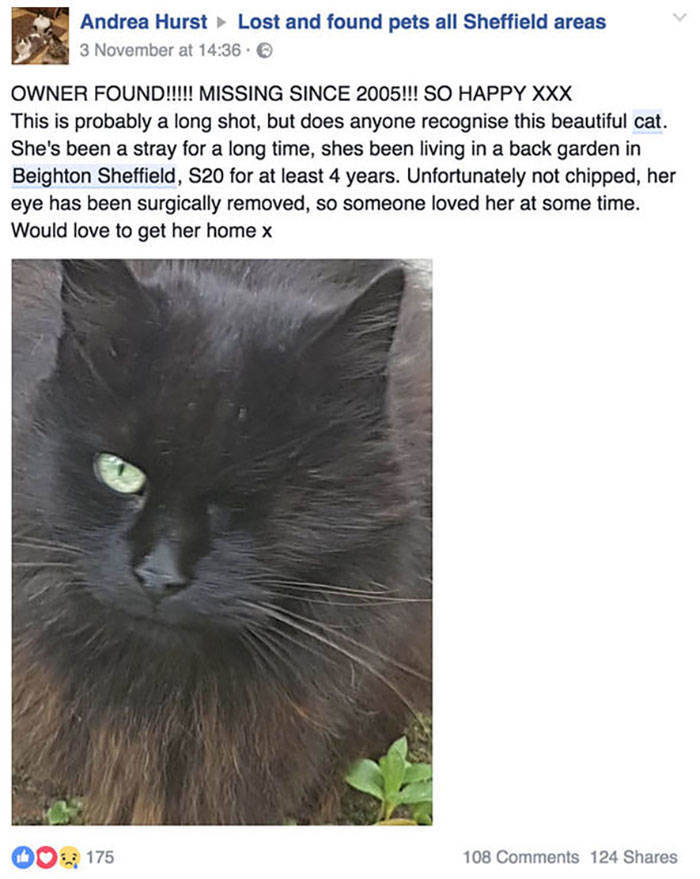 "She is even responding to her original name"

After 14 Months Owner Finds Her Missing Cat Twice The Size, Turns Out He Was Living In A Pet Food Factory 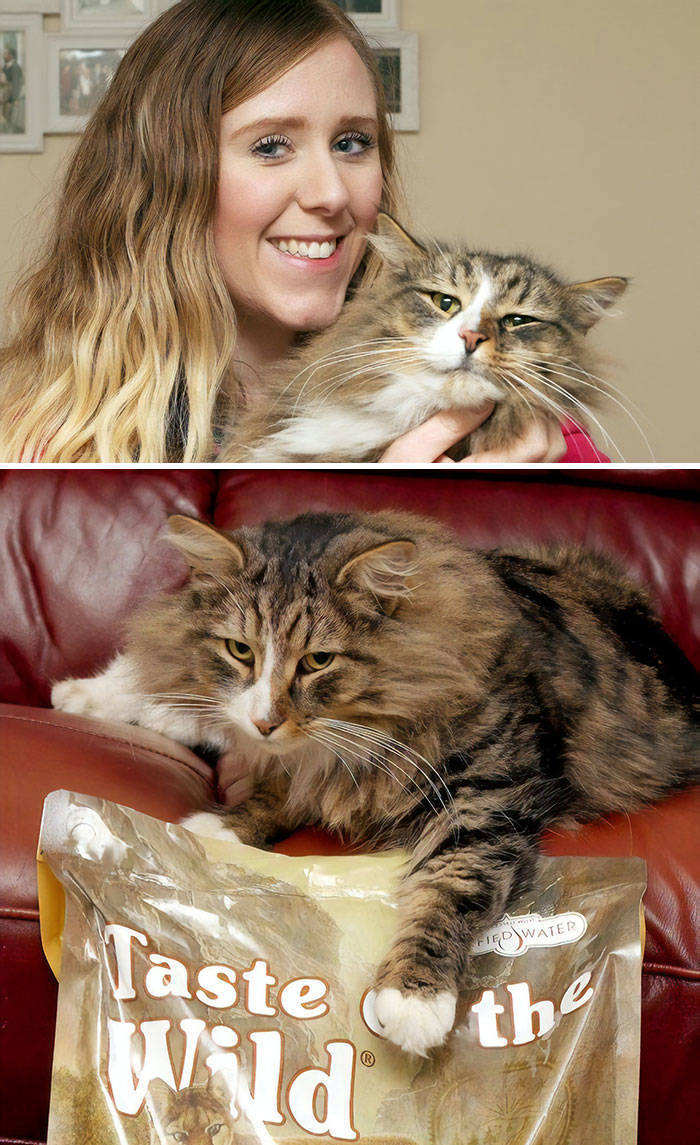 "I think he’s been enjoying himself feasting for the past year. He’s wasn’t a big eater before, but he always had to eat very quickly before his brothers stole it. He was probably glad he didn’t have to compete with them to eat for once. He has a huge appetite now though. I’ve had to leave him with a big bucket of food; he just won’t stop eating. We’re not going to put him on a diet though, he’s just a bit rounder, but he’s a perfect cat picture."

"My Cat That's Been Missing For 1.5 Years Has Been Found! Welcome Home Princess" 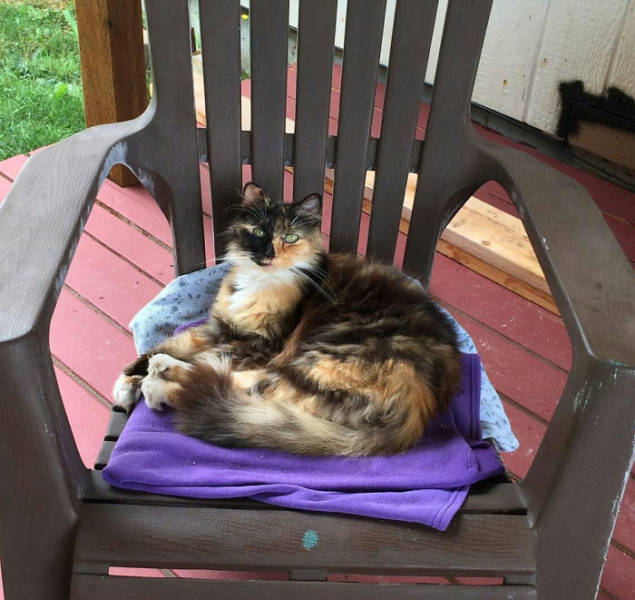 "Princess was mostly an indoor cat. I let her outside a little more each day then one day she disappeared. I'm assuming she got catnapped because she was found today one hour drive from where she was taken. A vet scanned her microchip and called my cell. A nice lady that only had her for 10 days took her to the vet and got her all cleaned up and free of fleas. I got the lady's number and she let me have my pet back with no issues.

I am so fortunate she is in good condition and that my boyfriend was able to drive one hour each way go pick her up today." 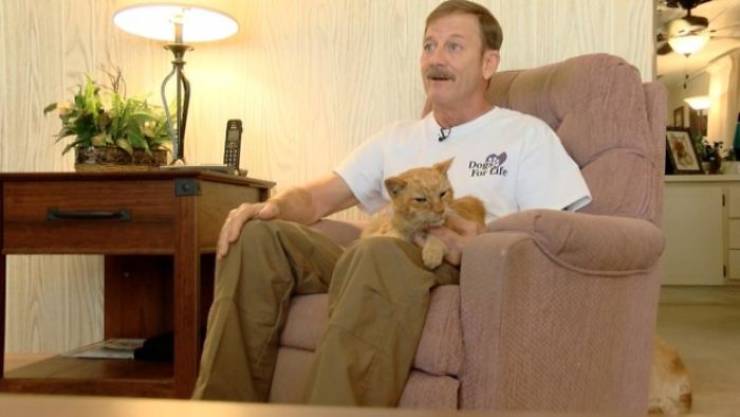 “As soon as I looked at that face, I knew exactly who he was. A little bit older, kind of like me!"

"Three Years Ago I Posted Here About My Beautiful Cat Having Run Away And How Upset I Was. Today She Was Found And Picked Up By The Pound, Safe And Sound Back Home, As Confident And As Loving As Ever. Welcome Home Arya!" 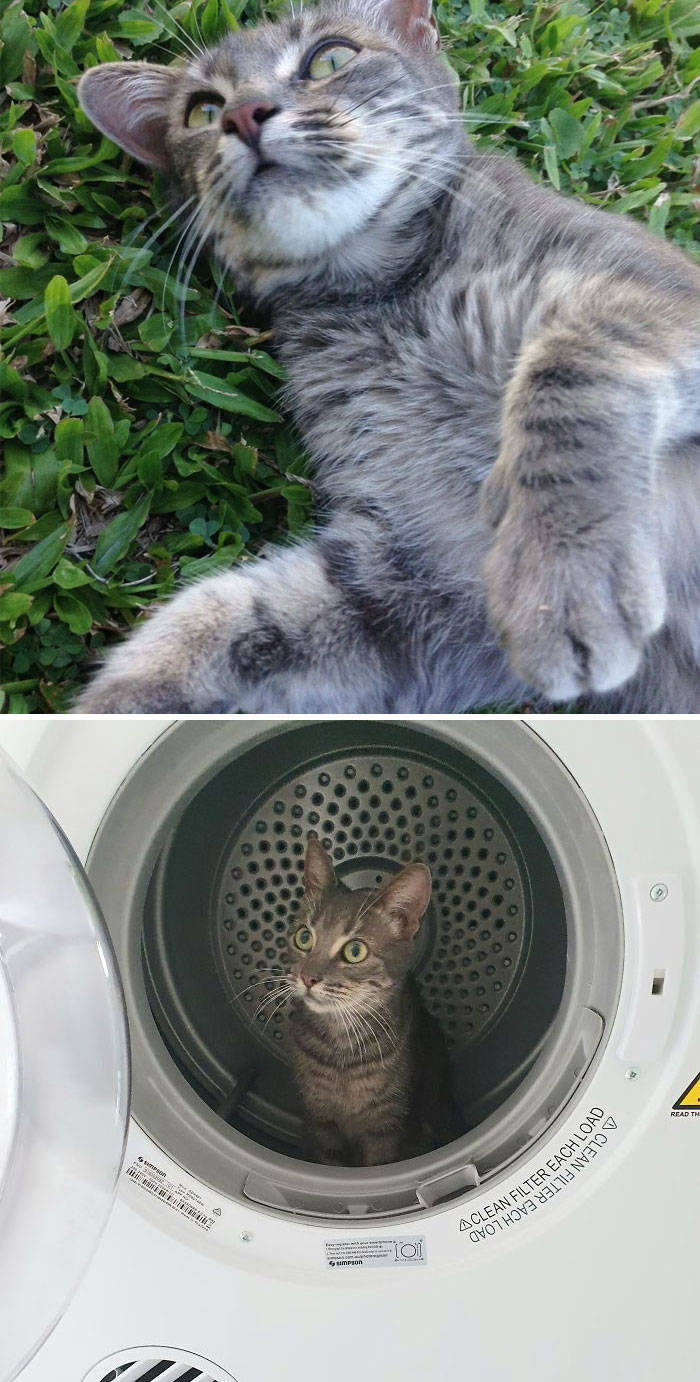 "My guess is another family took her in and didn't bother to check to see if she was owned. The fridge door was opened today and she came running not the behaviour of a street cat! Plus she's very healthy" 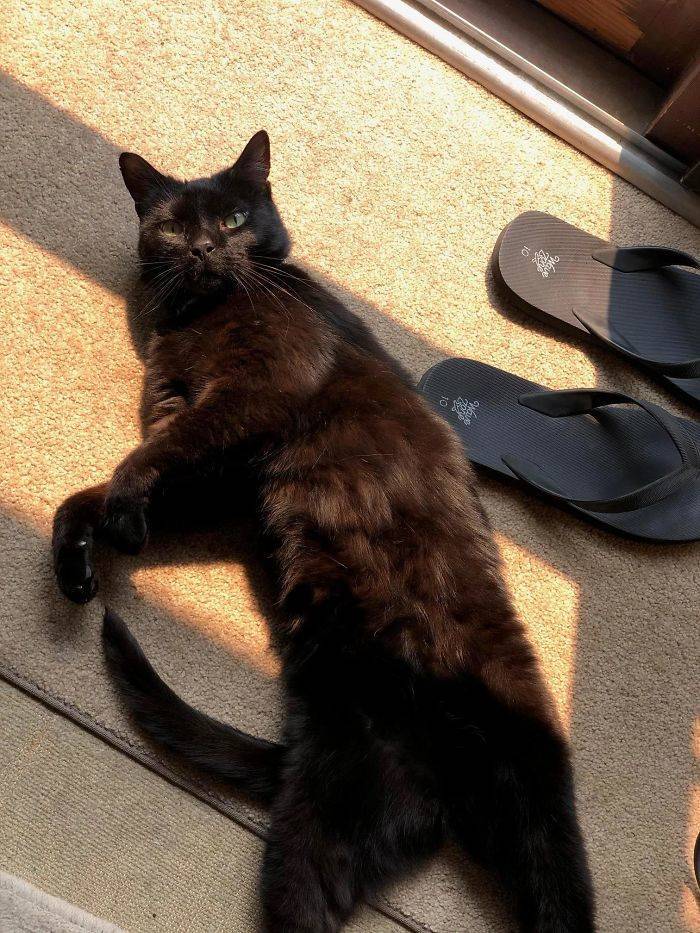 "A bit over 5 years ago my wife and I moved house, about a 7 minute drive from the old place. A little over a month after that, one of our 2 cats (my cat, Artimus, the first pet I had ever gotten myself) got out, and didn't return home. I went out looking, called the local vets and the shelters, spoke to the neighbours at the old house, and waited for a phone call which didn't come. I checked back in every week for a while, but no luck.

Then at the start of December, just before my birthday, I get a phone call from Animal Aid.

It was the best birthday present I could have received."

This Cat Was Returned Home After Being Gone For 18 Months. Look How Happy He Is About It! 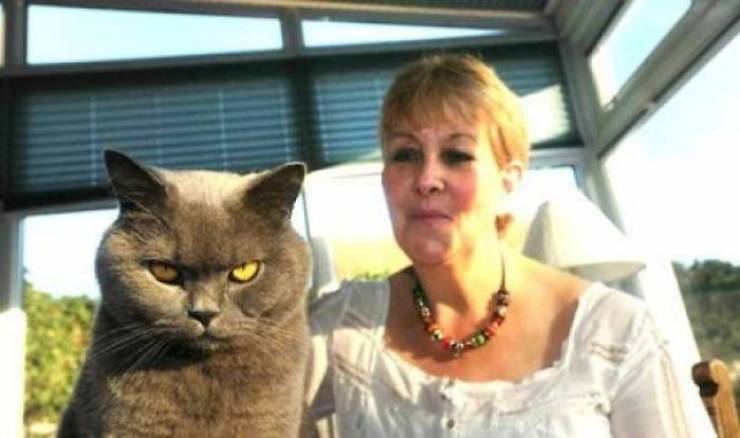 The Prodigal Daughter Has Returned. After Missing In Australian Bushland For 3 Years 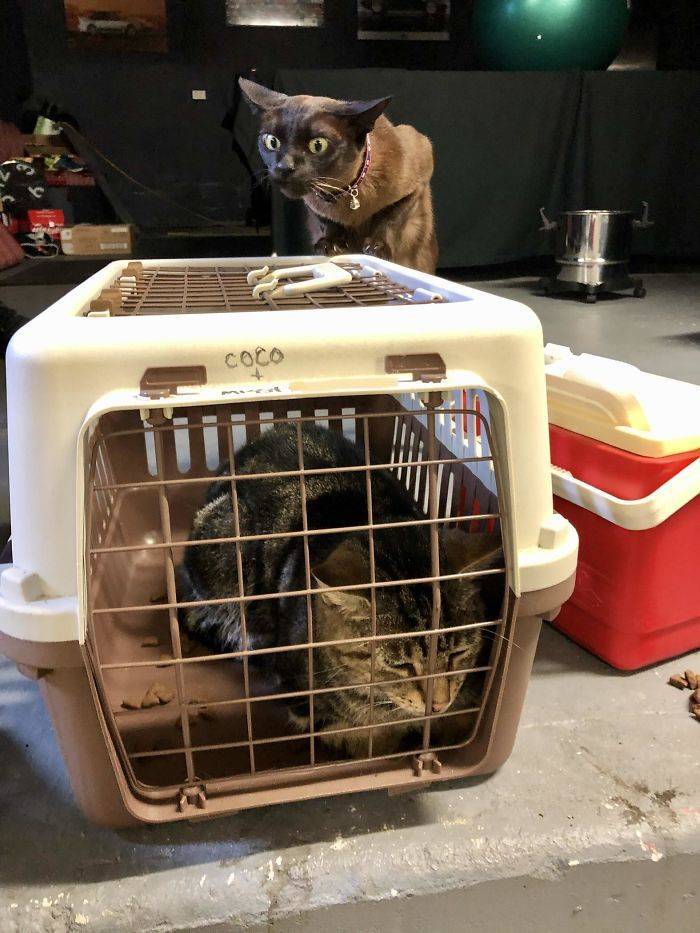 "We assumed she was dead, but our first cat has returned. This makes life very awkward."

"My Sister Got A Call From Animal Control Today. Her Cat Tom-Tom Has Been Found"

A Cat Missing For Five Years Was Found 1,200 Miles Away And Reunited With His Owner 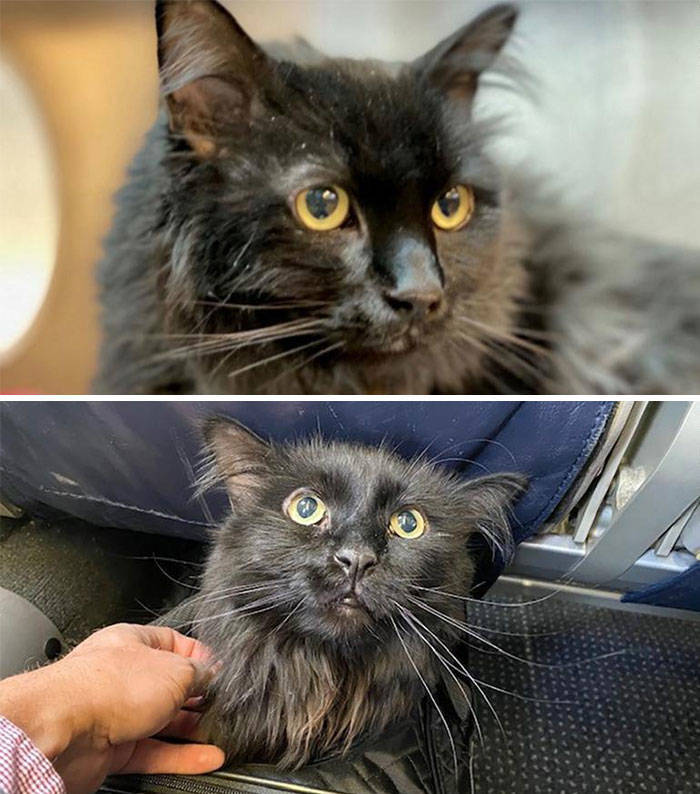 Reunited With Missing Cat After 7 Years 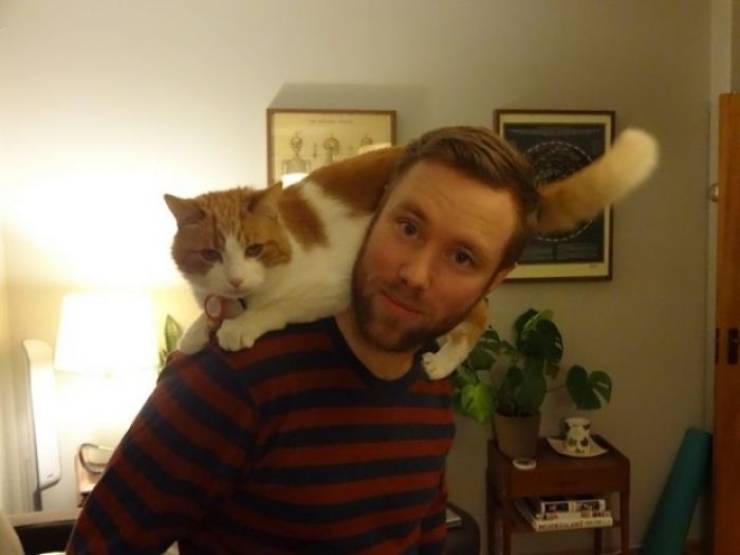 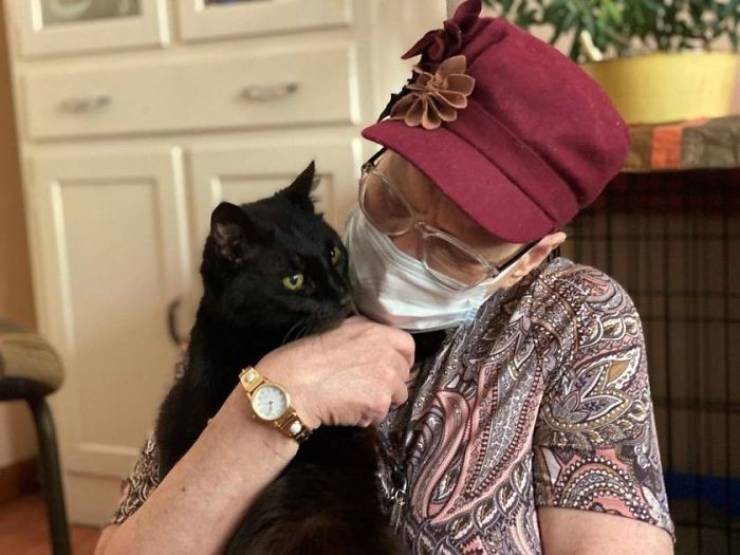 After 8 Years On The Road My Cat Finally Returned Home! 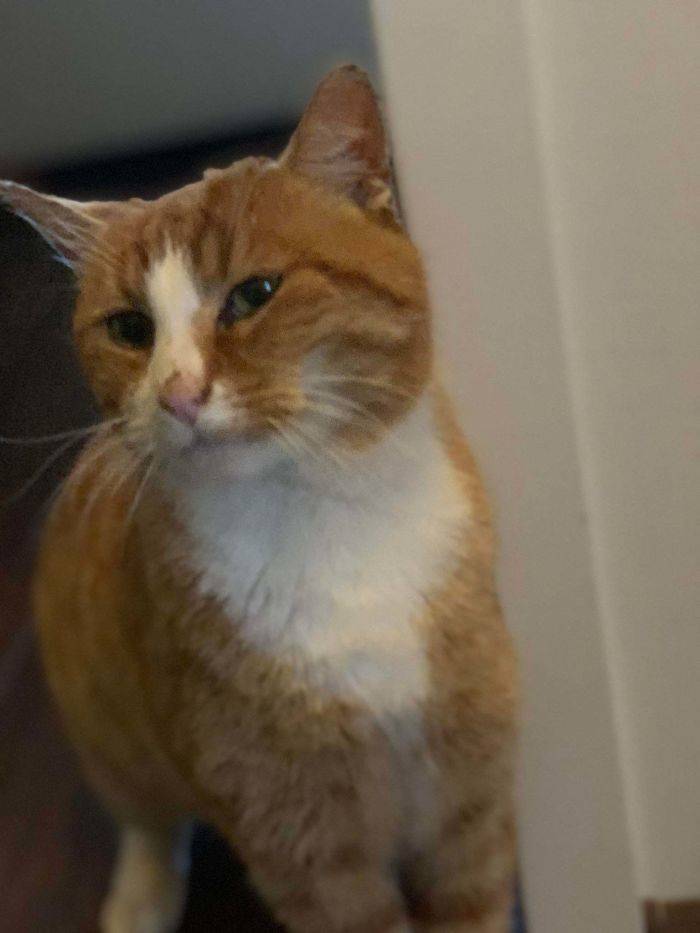 "8 years ago my cat ran away from home, yesterday we were called by animal control that they picked up a red cat and read his chip, and it turned out to be my long lost friend!"

"The Cat Returns... After 2 Years!!!! received Call From Vet This Morning "We Have Your Cat!" My Cat Hicks Went Missing 2 Yrs Ago! Suspect He Was Scared Off By Local Kids. Watched As He Recalled The House, Now Sitting Here Healthy Affectionate, Purring. What A Day! Tip.. Get Your Cat Chipped!" 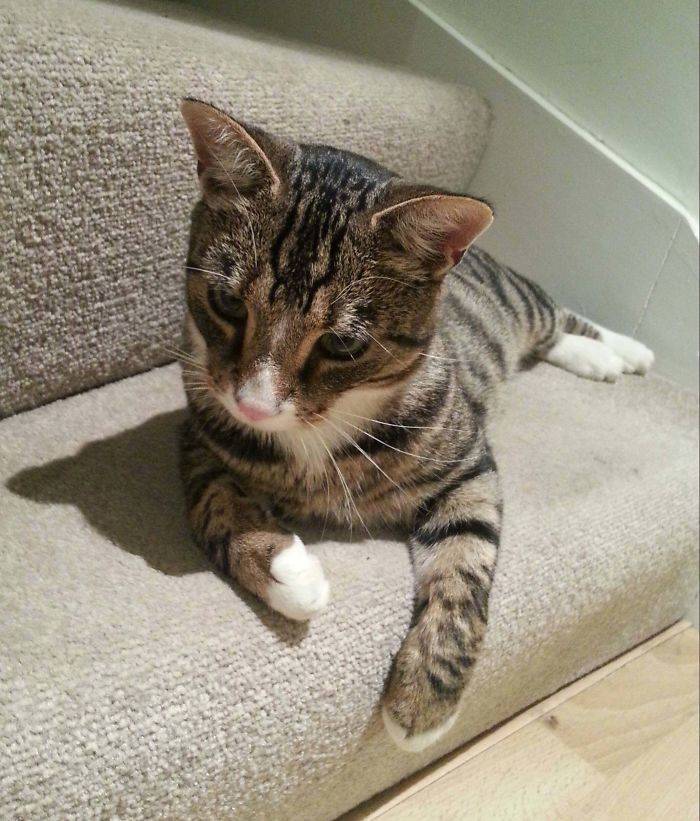 "Its horrible when they first go missing. No news is good news though. It's weird to see him doing things in the house that he used to do two years ago. He also used the litter tray in same old spot first time."

"11 Months Ago, While I Was Out Of Town My Cat Ran Away, After Months Of Searching I Found Her In A Shelter, A Day After Being Adopted. I Had To Accept That My Friend Of 12 Years Was Gone. Today, Nearly 11 Months Later Her New Owner Emailed Me, I Was Able To Bring Her Home Again." 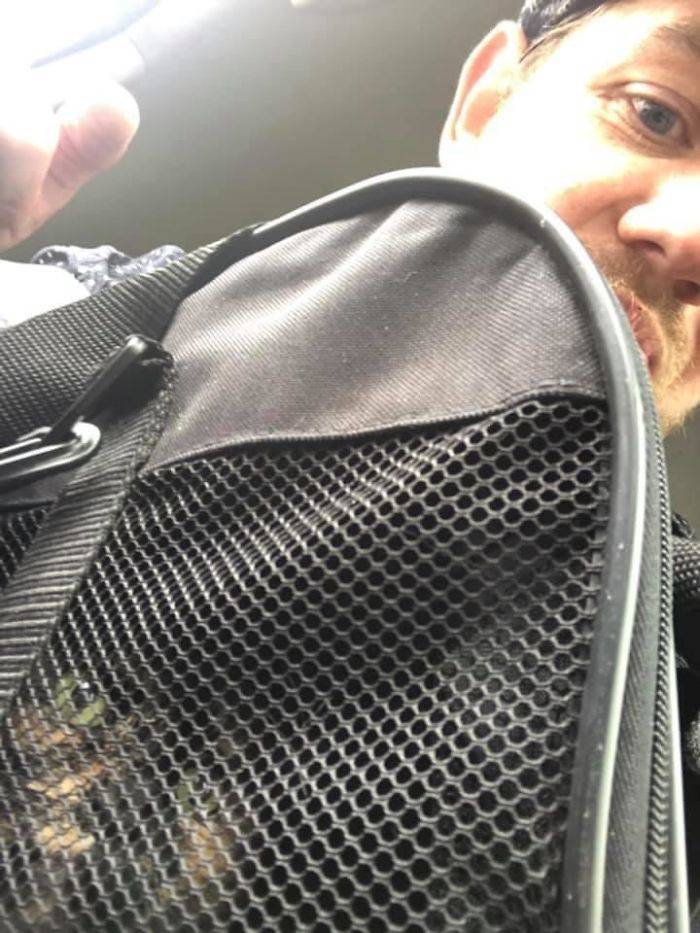 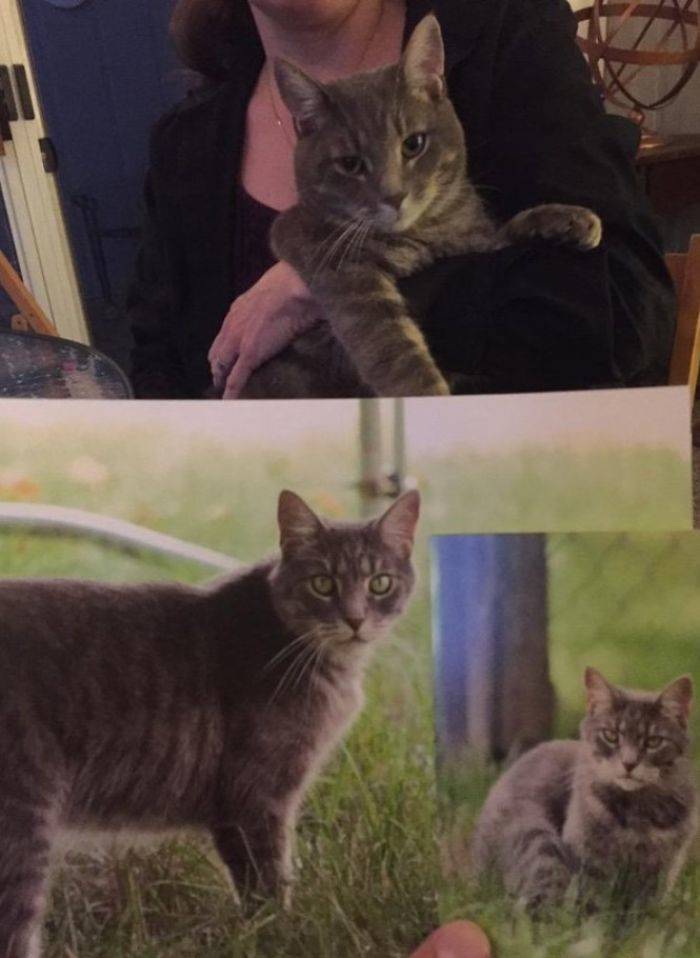 Nguhi Got A Kitty When She Was 9-Years-Old. They Lived Together Until 5 Years Ago When Panther Just Disappeared

"It turns out that after he ran away, Panther was taken to a shelter in a city 15 miles away. Whilst there, a woman adopted and kept him for a few years before giving him to her parents. As luck would have it, the woman’s parents also turned out to be the next door neighbors of Nguhi’s parents." 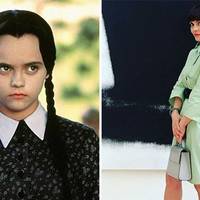 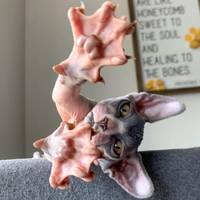 I guess you've a cat then 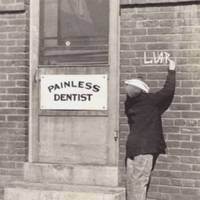