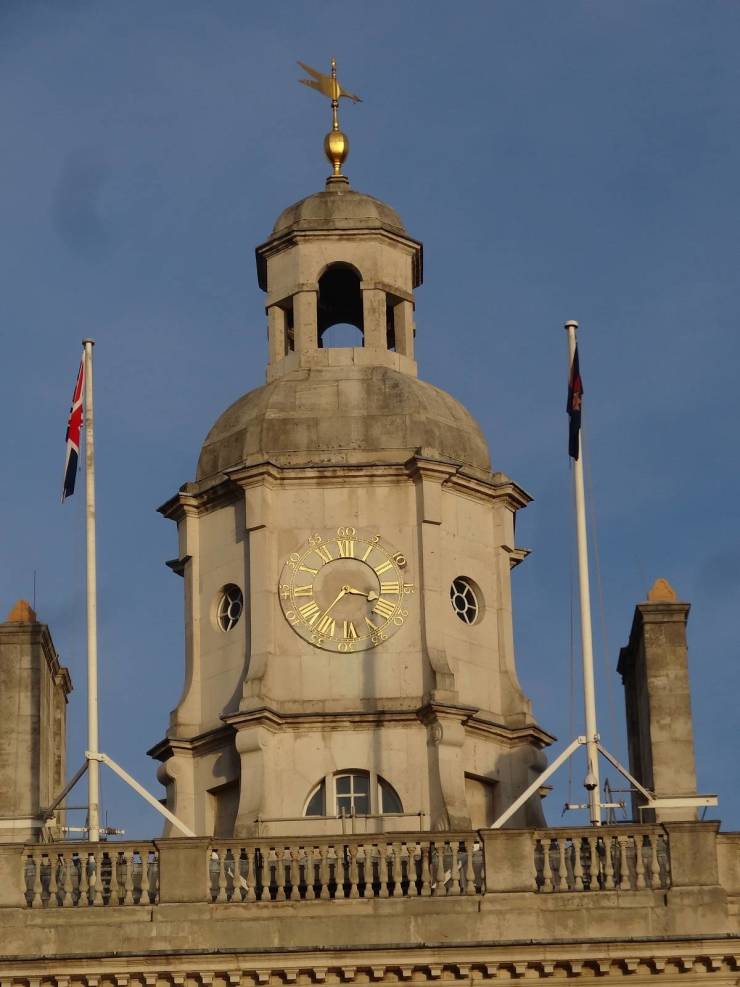 Attentive tourists may notice that there is some strange dark spot that looks like either a stone defect or a fungus on the tower clock of the Horse Guards Clock in London. It is located right at the 2 o’clock mark.

The black mark on the clock face is not dirt or mold. This dark spot marks the time of the execution of King Charles I, near this place on January 30, 1649, at 2 p.m. The apartment building in Marseille, which was designed by Le Corbusier and built in 1952, was supposed to begin the active construction of the same type of buildings throughout France. It might look like a normal block of apartments to a person who is not well-versed in architecture, but it’s not quite like that.

Le Corbusier came up with a new concept for building blocks of apartments with a perfect (in his opinion) correlation between the individual and the collective. The concept included the theory that there would be no necessity for a resident of the building to have to leave the building in order to satisfy any of their needs — all public services, as well as shops and restaurants, were located inside. Moreover, the apartment building has a hotel and a school inside.

Riga Central Market is a large roofed market found in Riga, Latvia. It occupies a huge area of 7.23 hectares and is made up of 5 pavilions, which are the main attraction. The thing is that those pavilions used to be German Zeppelin hangars that were repurposed into a market. 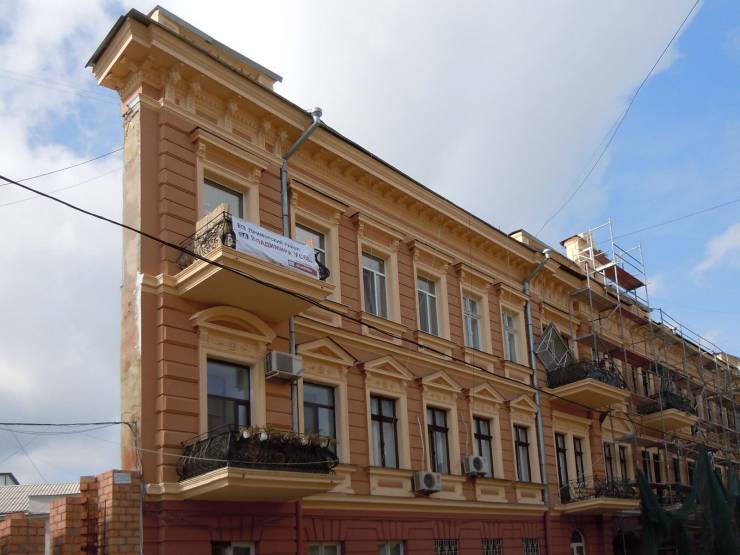 This building , located in Odessa, is also called “The Wall-House” and “The Flat House” because it may seem that it only consists of a façade from a certain angle.

Much of the history about the building has been lost to time. According to one popular theory, the flat appearance was created to save on labor costs by connecting 2 lateral walls. Another explanation is that there wasn’t enough land to build a traditional building. 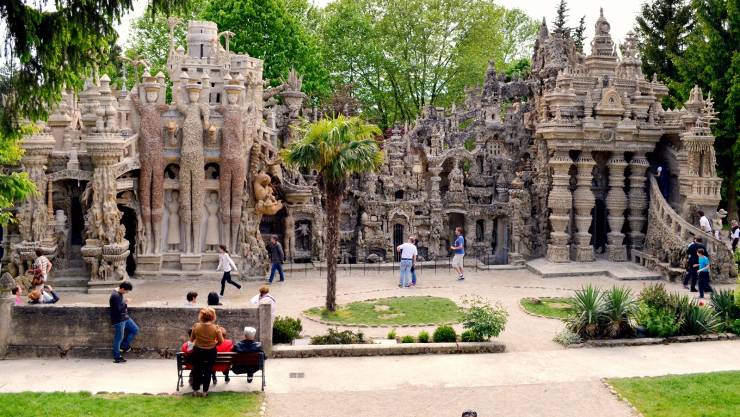 It’s hard to believe but this building was constructed by one person — a postman named Ferdinand Cheval , who had neither an architecture degree, nor money for construction materials. He had been collecting sideroad stones from 1879 until 1912 (33 years in total) while he was delivering mail.

It took him years to construct this bizarre building, where it’s impossible to point out just one architectural style. Nevertheless, after many years, Ferdinand even got recognition from Pablo Picasso himself. 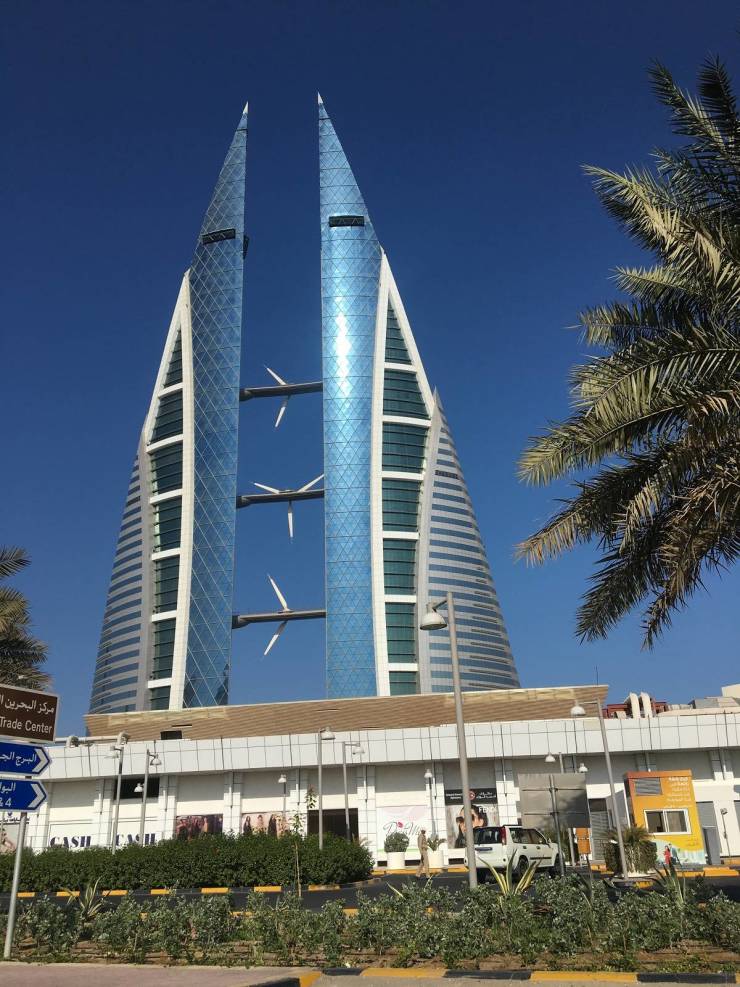 This skyscraper that was built in Bahrain in 2008 got an award for its nature saving design. The bridges connecting the twin-towers have built-in wind generators. The sail-shaped building is designed so that the wind passes through the turbines at maximum speed. Wind generators provide up to 15% of the skyscraper’s yearly total energy consumption. 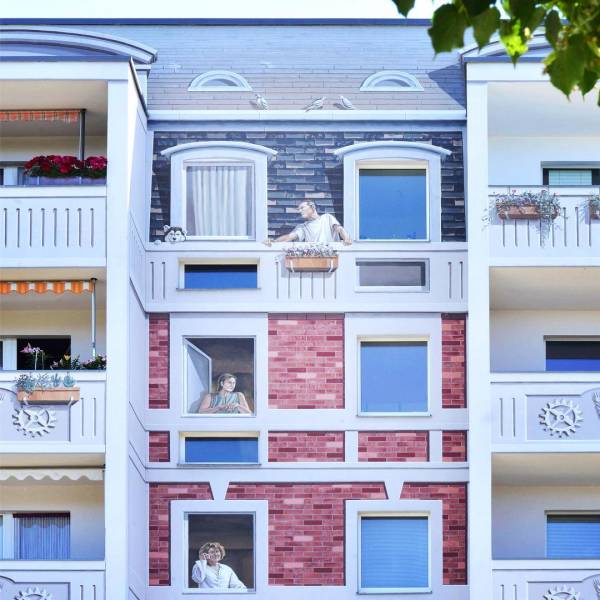 The residents of the Berlin district of Marzahn used a non-trivial approach to restoring the panel block of flats left from GDR (German Democratic Republic) times. The small district of gloomy high-rise buildings was turned into a fashionable district with the help of a little paint. Balconies, fretwork, marble, and other beautiful details are all murals, which is, by the way, the largest in Europe.

Thanks to this, this sleeping district started to attract tourists. Those who don’t know the secret will never guess that all this beauty is actually art.

The smallest house in Paris, France 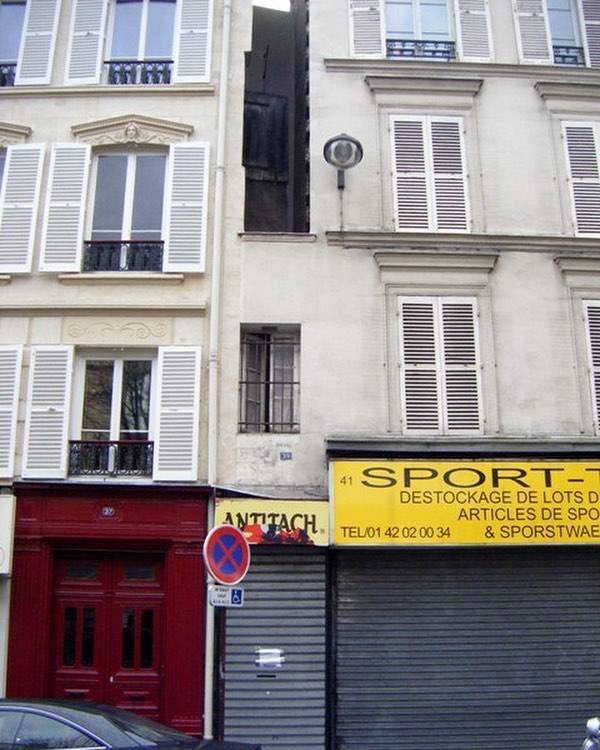 The building that is as wide as a queen-size mattress used to be a shoemaker’s workshop . Today it’s a residence with a separate entrance. 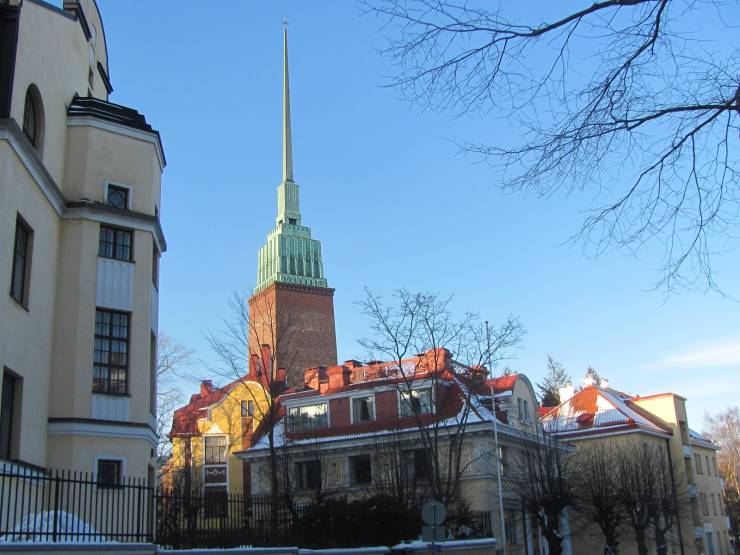 Mikael Agricola Church was built in Helsinki, Finland in 1935 and has one interesting detail  — the nearly 100 foot spike that can be retracted if necessary. During the war, air raids were quite frequent here and the government didn’t want the spike to become a reference point for enemy bombers. 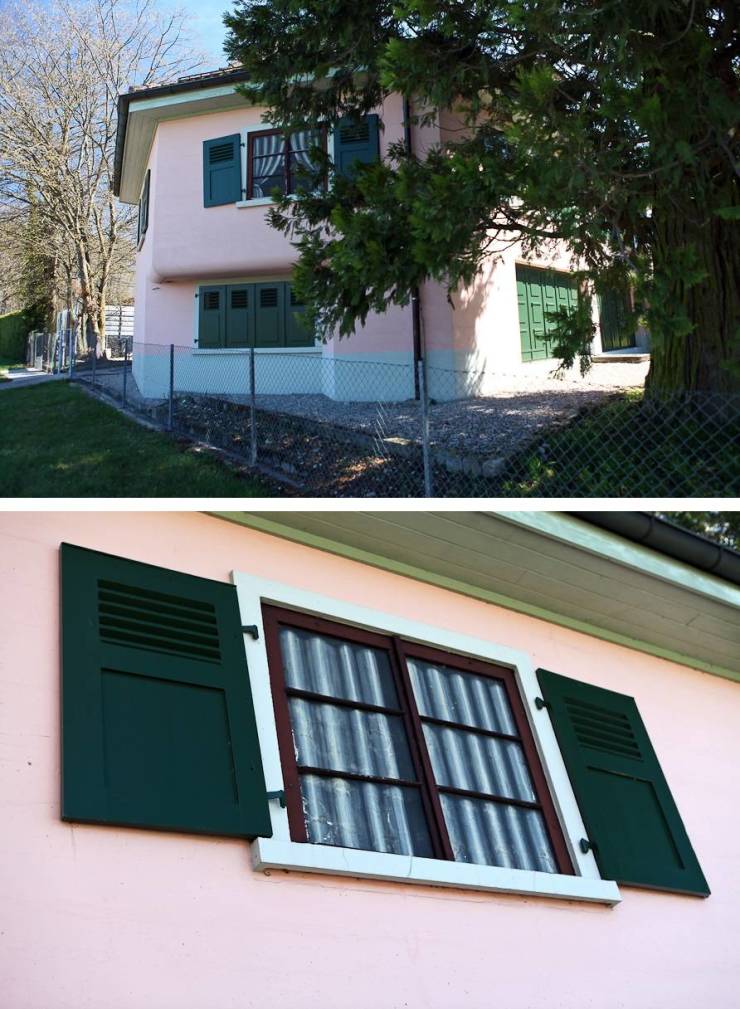 Although Switzerland didn’t participate in the Second World War, it maintained armed neutrality and was ready for an attack at any moment. They elected the military government, and built “The Toblerone line ,” which is an anti-tank defense line made of concrete blocks, as well as other fortifications, including the fortress “Villa Rose.”

It looks like an ordinary house from the road, but if you look closer you’ll see that the windows in the house are drawn on. In the ’40s, this fortress always had a platoon of soldiers ready to attack, as well as artillery guns in it. 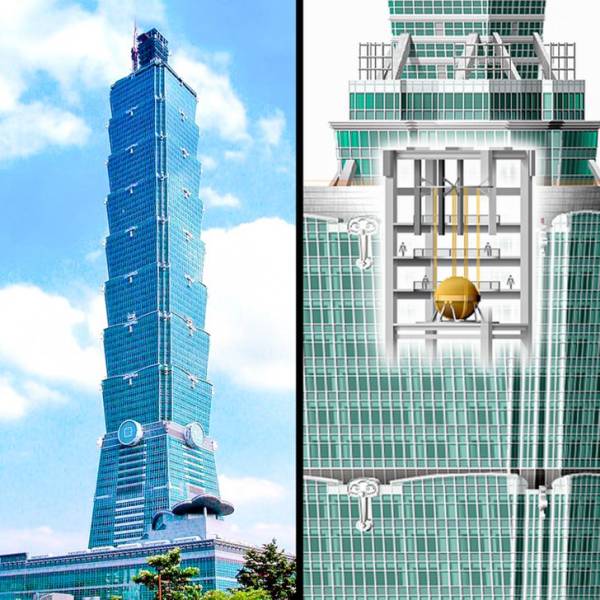 It’s well-known that due to strong winds, skyscrapers deviate from their axis : the residents of the upper floors can even feel something like seasickness . In order to minimize this effect and make these types of buildings more stable, a special inertial damper is used — it is a huge pendulum that is suspended in a special shaft closer to the top of the building.

The Taiwanese skyscraper, Taipei 101, has the largest damper in the world, which is a huge sphere that weighs 660 tons. 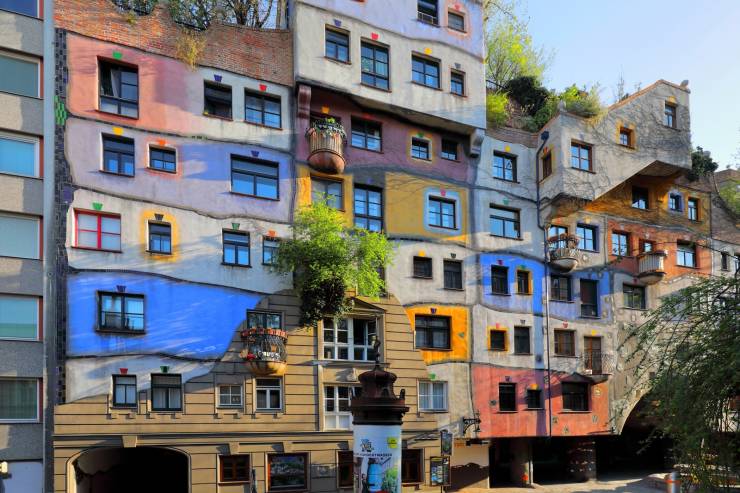 This house, that has 53 apartments, was built by the Hundertwasser ’s project in Vienna. It’s easy to see the borders of the apartments on the façade, because each of them has its own color. A church dome and 19 gardens with trees and shrubs growing in them are located on the roof of the building. Hundertwasser designed this house for free, but approached the city authorities with a request where he asked them to not build anything else in this place that he wouldn’t like. 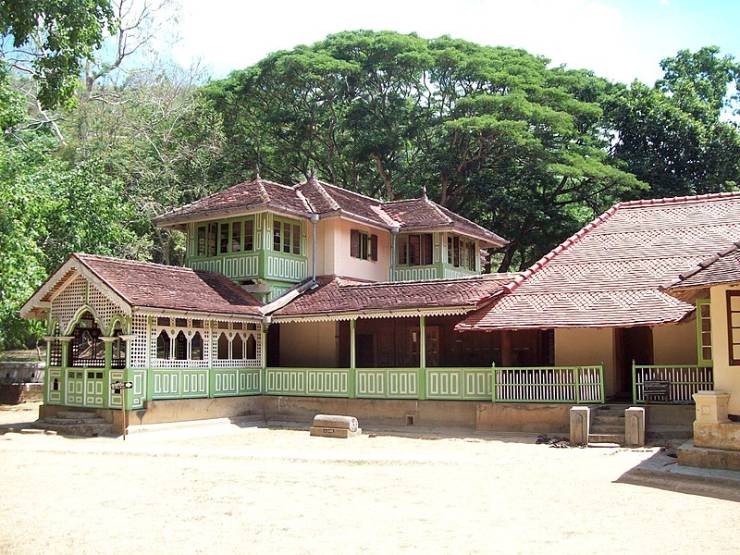 The British used to appoint regional rulers from people among the local nobility in colonial times in Sri Lanka. Maduwanwela Maha Disawa was one of these rulers. He hated colonizers with all his heart, but couldn’t openly rebel against them, which is why he demonstrated his disrespect in an interesting way.

Found in the Ratnapura District, Maha Disawa ordered that an arch be built at the entrance to the territory of his estate, so low that the colonialists were forced to “bow” if they wanted to see him. Moreover, he added British symbols, like the portrait of Queen Victoria, the pound sterling sign, a coat of arms, and other things to the mosaic on the floor. The colonial authorities might have thought that this was how Maha Disawa expressed his loyalty, while, on the contrary, his idea was to let the house residents, servants, and visitors trample the mosaic with their feet.