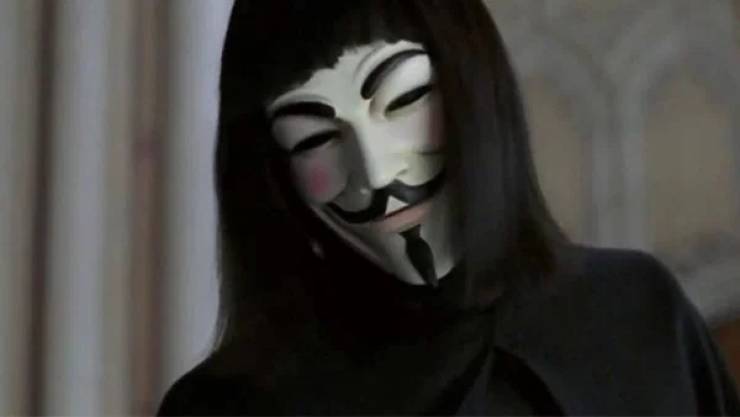 All of V’s dialogue was dubbed. Initially, a mask was designed with a small microphone inside, and another mike was designed to sit along Hugo Weaving’s hairline, but neither worked very well. 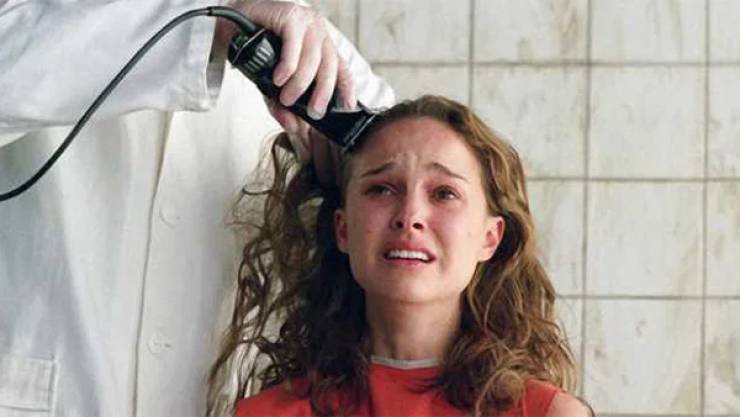 All of the models (the Old Bailey, the Clock Tower, and the Houses of Parliament) were built at one-tenth scale. Together, they took twenty people ten weeks to build. 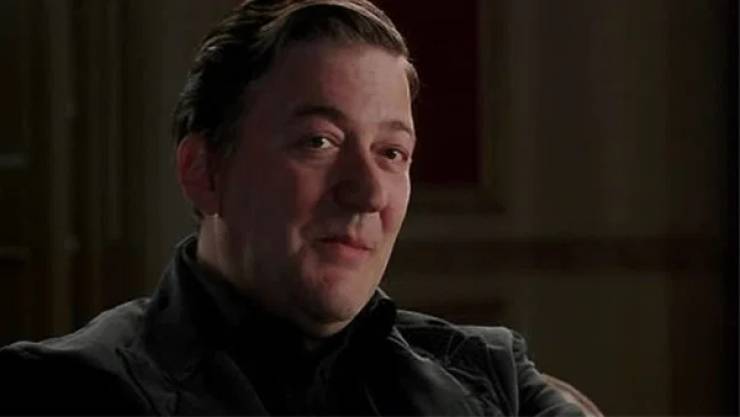 When asked in an interview what he liked about his role, Stephen Fry replied “Being beaten up! I hadn’t been beaten up in a movie before, and I was very excited by the idea of being clubbed to death.” 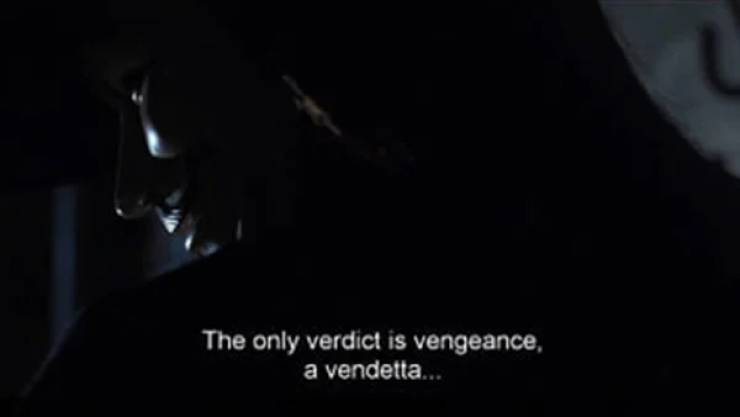 During the introduction of V to Evey, starting with “Voila” and ending with “coincidence”, V uses words that begin with “V” forty-eight times. 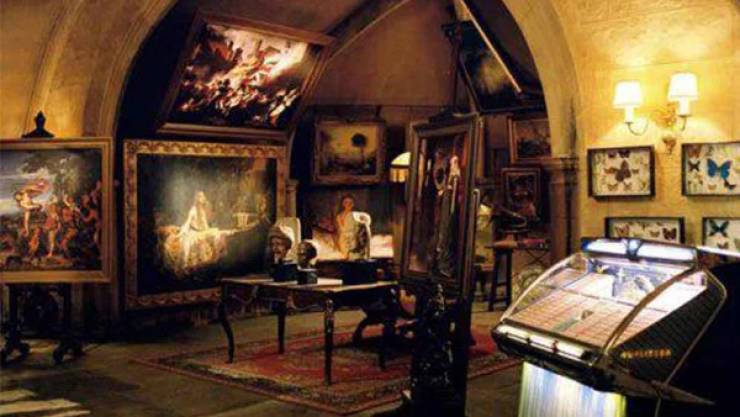 Amongst the paintings in V’s lair are Waterhouse’s “The Lady of Shalott”, “Puberty” by Edvard Munch, “Bacchus and Ariadne” by Titian, “The Arnolfini Wedding” by Van Eyck, and “Elohim Creating Adam” by William Blake.

When shooting the fight in Victoria Station, the stuntmen moved in slow motion on-set, while David Leitch (Hugo Weaving’s stunt double) moved in real time, making it seem as if he was moving much faster than the Fingermen. 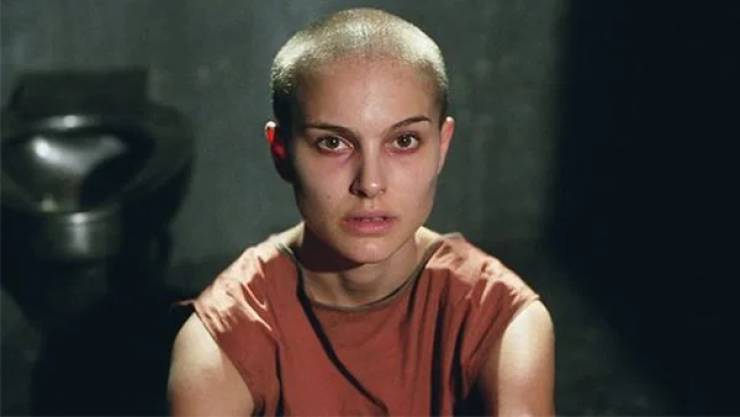 Natalie Portman looked forward to buzzing her hair, saying she’d wanted to do that for a long time. 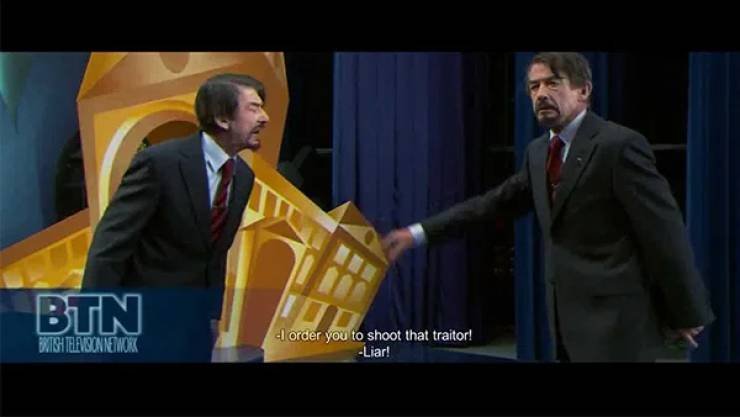 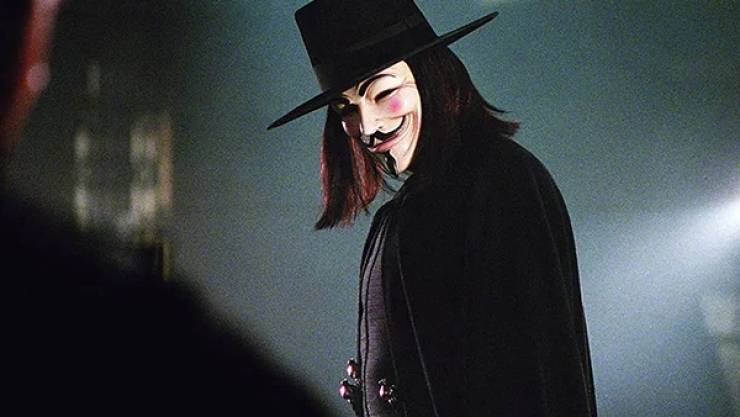 Certain scenes feature James Purefoy as V, who was originally cast in the role, but was replaced by Hugo Weaving four weeks into filming. Weaving’s voice was simply dubbed over Purefoy’s performance in post-production. Director James McTeigue said: “Can I tell the difference? Yeah. Can the audience tell? I doubt it.” 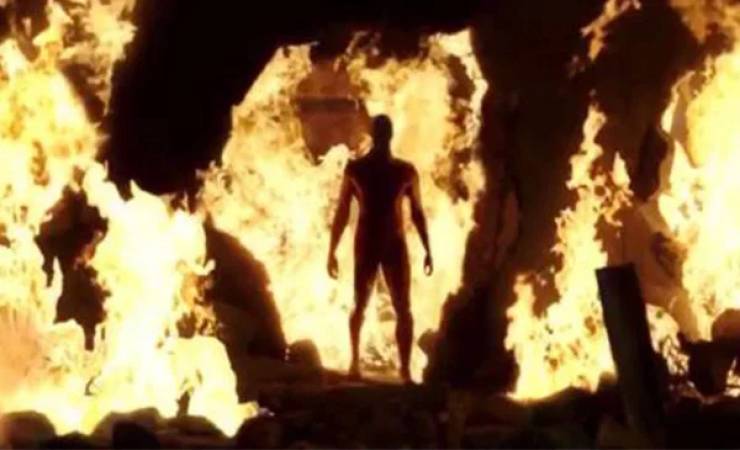 Stahelski’s body temperature had to be lowered before the scene, and luckily, it was three degrees below zero the night of the shoot. Fifteen minutes before a take, he would put on ice-cold flame resistant clothing, and once he took them off, he would be covered with fire-resistant gel which had been icing all day.

This movie was supposed to be released on November 5th, in time for Guy Fawkes Day. Due to production delays, it was released during the St. Patrick’s Day weekend. 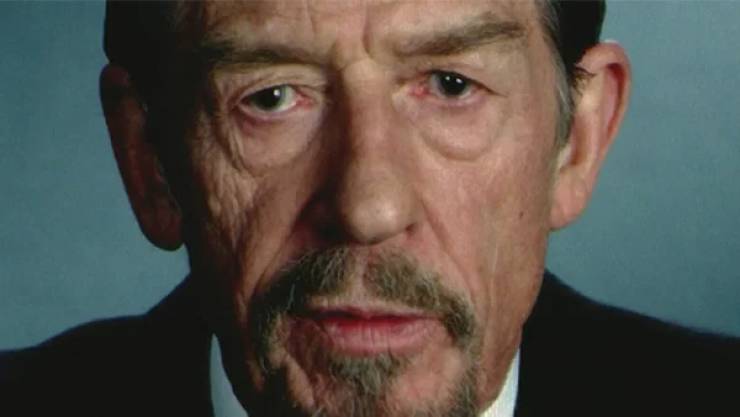 In all of Adam Sutler’s scenes, he only blinks once. 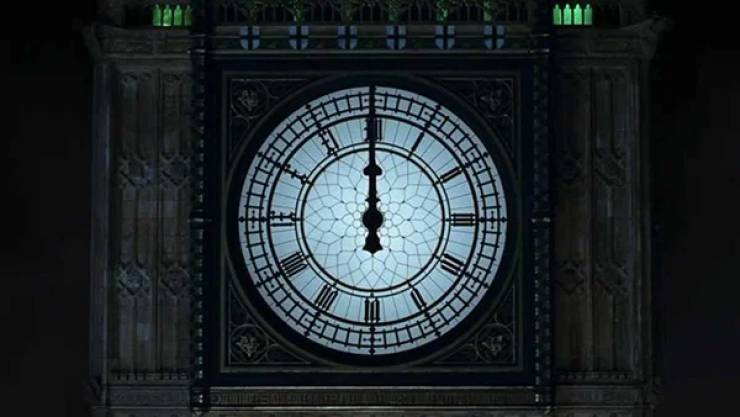 The cast and crew were only allowed to shoot near the British Parliament and the Clock Tower from midnight to 4:30 a.m., and they could only stop traffic for four minutes at a time. 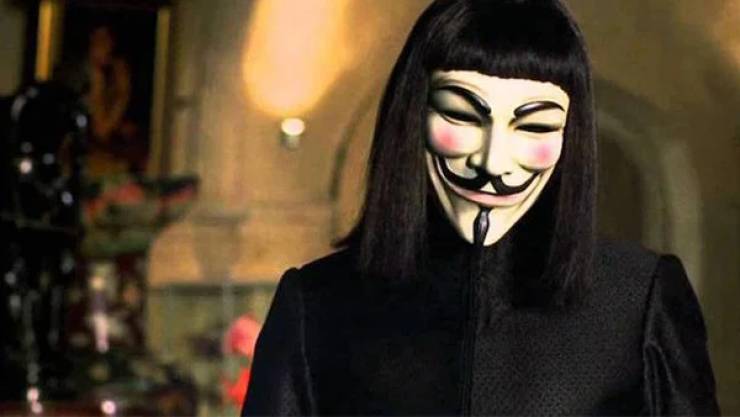 V wears a variety of different wigs in this movie, some longer or shorter than others, and they still maintain the same hairstyle. 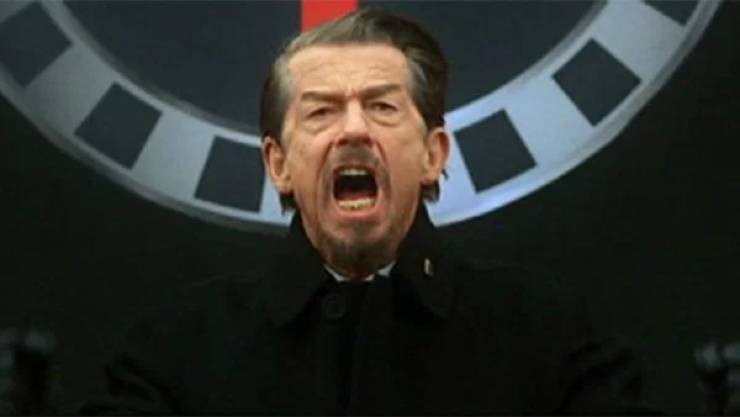 In the original graphic novel, the leader’s name is Adam Susan, not Sutler. He was renamed because “Sutler” sounds similar to Hitler. 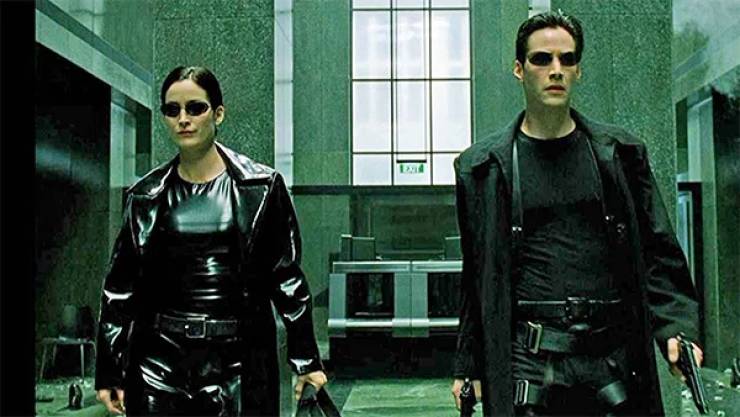 Lilly and Lana Wachowski, huge fans of the original comic series, wrote a draft of the script in the 1990s before they worked on The Matrix (1999), which shares several similar themes. 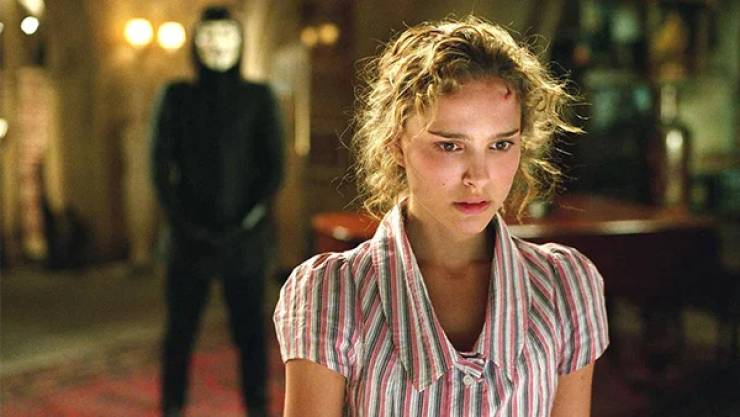 The domino scene, where V (Hugo Weaving) tips over black and red dominoes to form a giant letter V, involved 22,000 dominoes. It took four professional domino assemblers 200 hours to set it up. 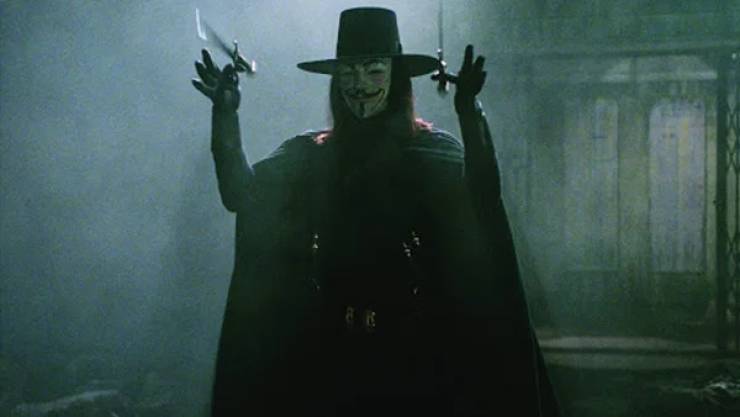 In the comic, illustrator David Lloyd often subtly changed V’s mask to suit the mood or tone of a particular scene. The filmmakers considered several subtly different masks, but decided to alter the shadows and lighting in post-production. 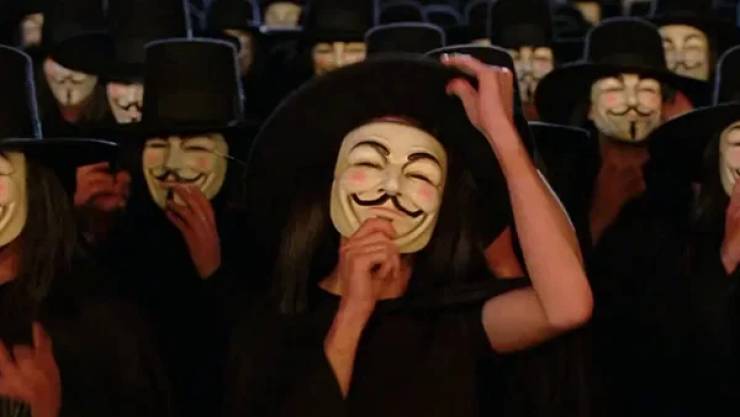 In the end, where the people remove their masks, you can briefly see characters who have died in the movie, including the girl with glasses, Deitrich, and Valerie, suggesting that their cause and their memory live on. 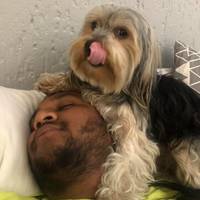