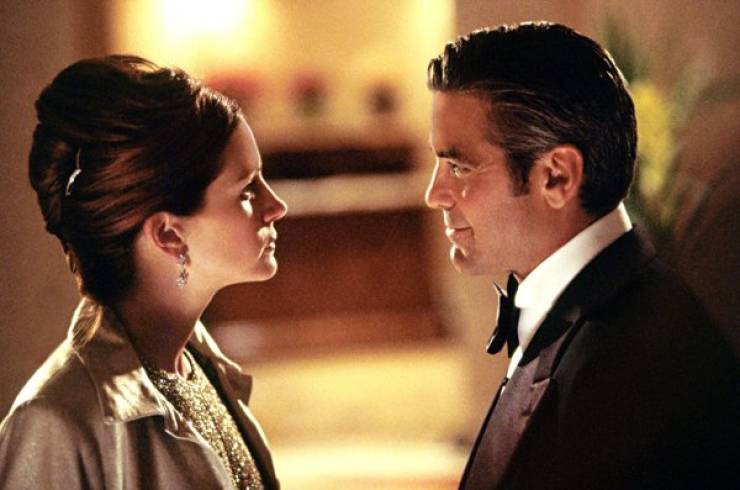 The script was sent to Julia Roberts with a $20 bill attached. Included was a note from George Clooney that said “I hear you’re getting 20 a picture now”. This of course is a joke referencing Julia Roberts becoming the highest paid actress at $20 million per picture. 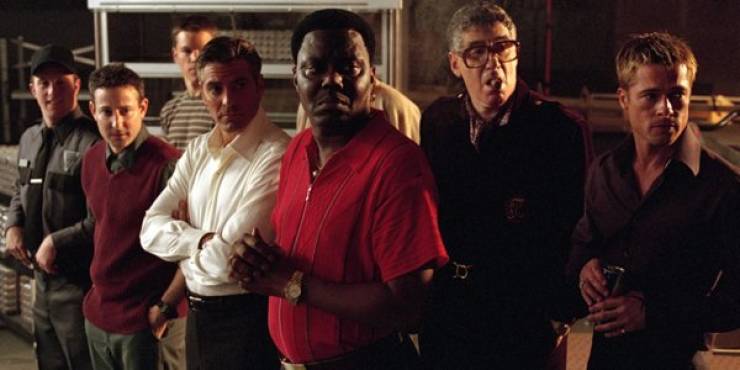 The entire cast worked for less than their usual salaries to bring down the budget. 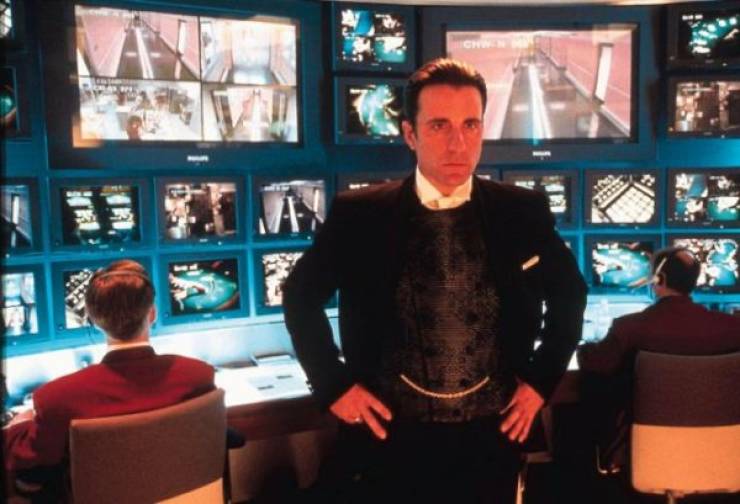 The Bellagio let the crew tap into their security system to get real surveillance footage of the casino. 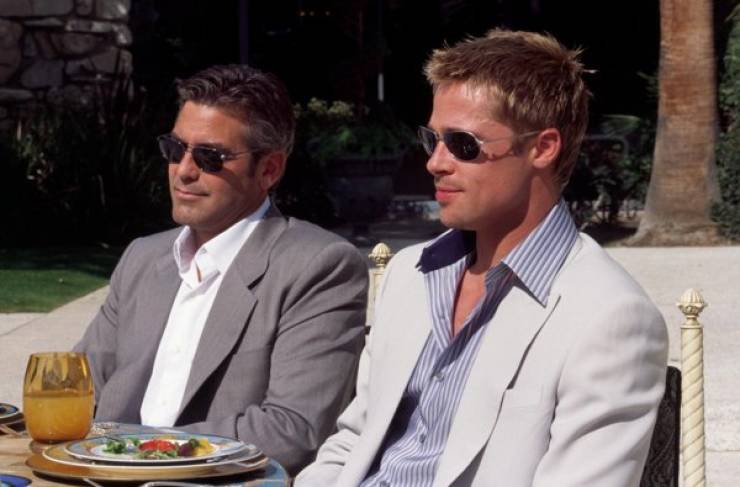 The cast did gamble during off hours. While there’s disagreement between who won the most (George Clooney says Matt Damon, Damon says Brad Pitt), Clooney managed to lose 25 hands of blackjack in a row. 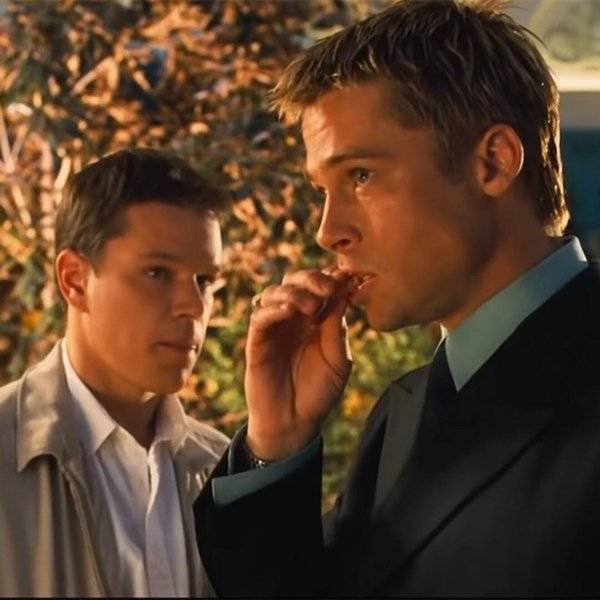 During the several takes it took to shoot the scene in which Rusty and Linus are spying on Tess as she is introduced coming down the stairs, Brad Pitt, who plays Rusty eating shrimp from a shrimp cocktail, ate 40 shrimp. 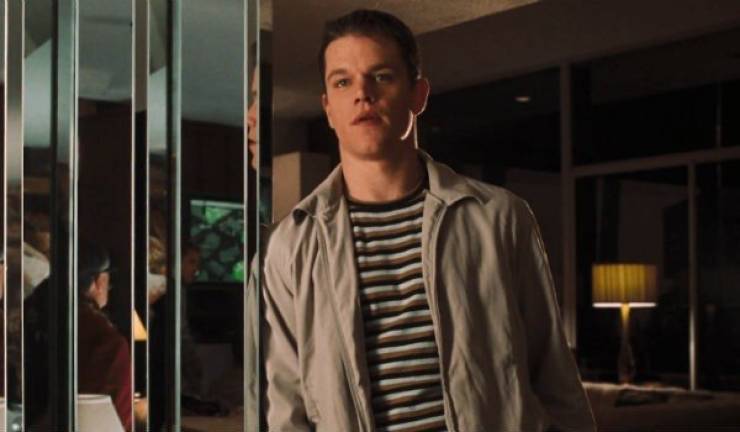 Matt Damon’s part as Linus Caldwell, the pick pocket, was meant for Mark Wahlberg. He turned it down in order to star in Planet of the Apes. Whoops! 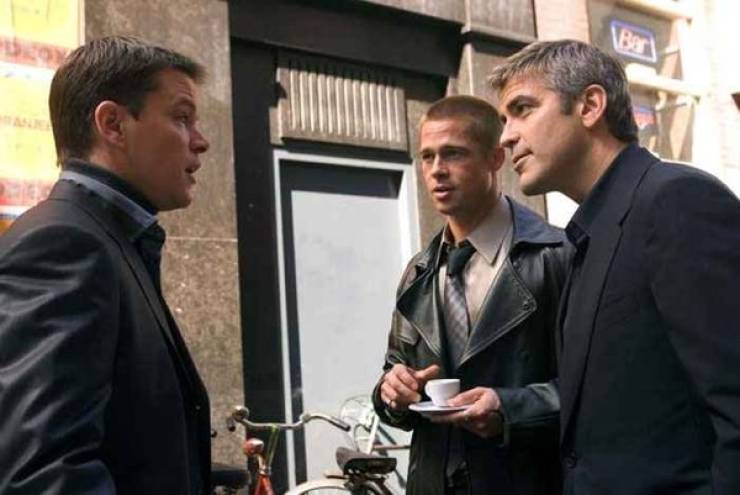 And reportedly, Wahlberg was the first option to replace Damon in Ocean’s Twelve when the Bourne Identity star almost didn’t sign back on for the sequel. 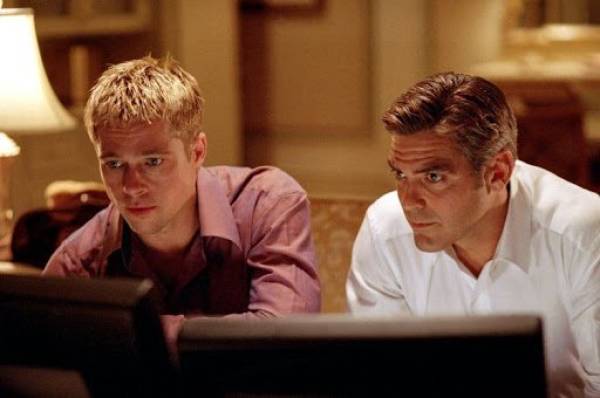 The lead cast members lived at the Bellagio during filming – each in separate 7000-square-foot villas. 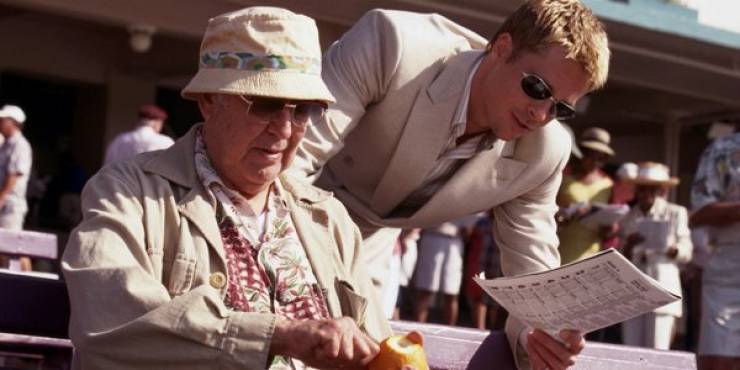 Steven Soderbergh wanted the actors to hang out on set to make sure they had good chemistry. During downtime, the cast often crowded around Carl Reiner to listen to his stories. 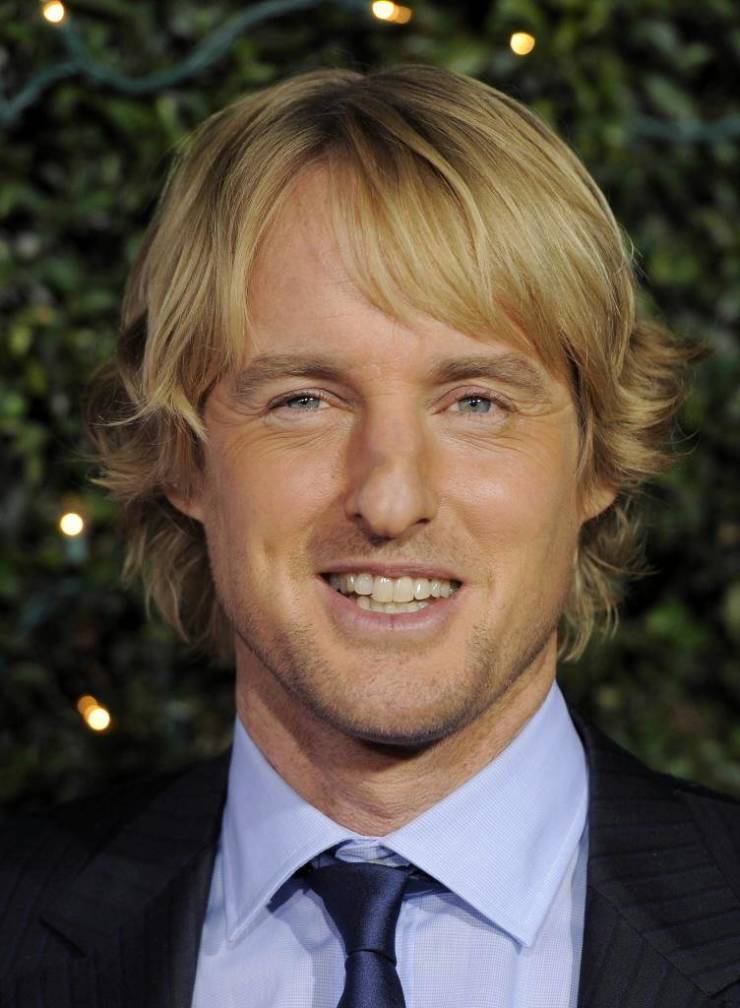 Luke Wilson and Owen Wilson were to play the brothers Virgil and Turk, but dropped out to film The Royal Tenenbaums (2001). Danny Glover also turned down the role of Frank Catton in order to be in that film.

When Rusty Ryan (Brad Pitt) is teaching the “teen idols” to play poker, all of the actors are actual “teen idols” who were at the time starring in popular TV shows. They are: Holly Marie Combs of Charmed, Topher Grace of That ’70s Show, Joshua Jackson of Dawson’s Creek, Barry Watson of 7th Heaven, and Shane West of Once and Again. 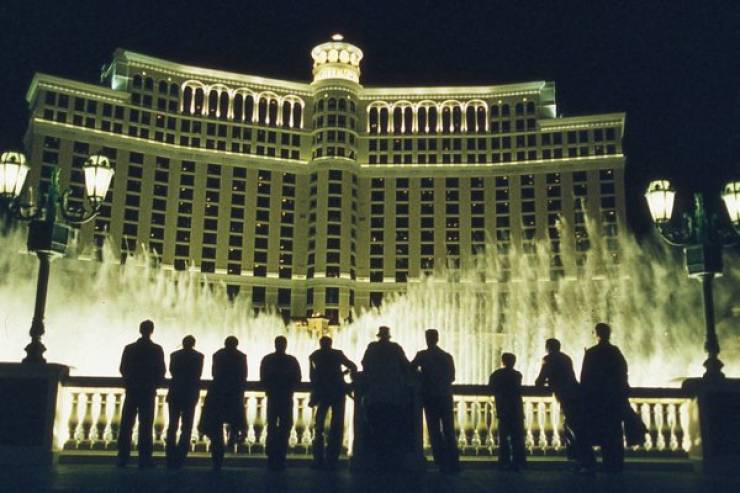 Matt Damon said the scene at the fountain was the last thing they shot and “oddly emotional.”

Bruce Willis was originally cast as Danny Ocean, but had to pull out due to scheduling conflicts. He would later make a cameo appearance in the 2004 sequel.

Steven Soderbergh used a 45-degree shutter effect for the flashback scenes. It causes the film to be exposed to light for less time than usual and results in more of a choppy feel. 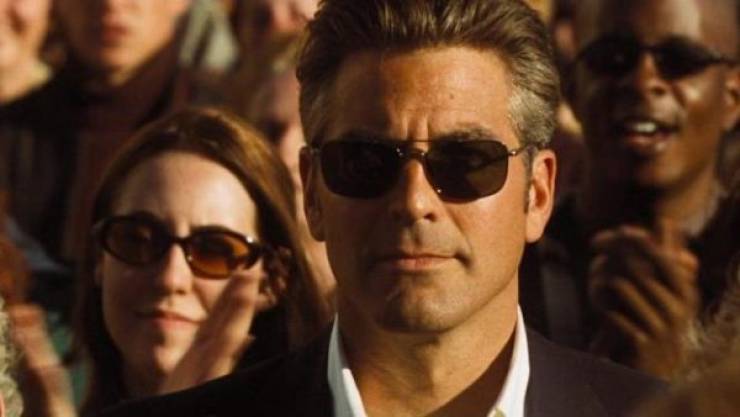 With the exception of the title character “Danny Ocean”, none of the principal characters have the same names as their counterparts in the 1960 version of the film. 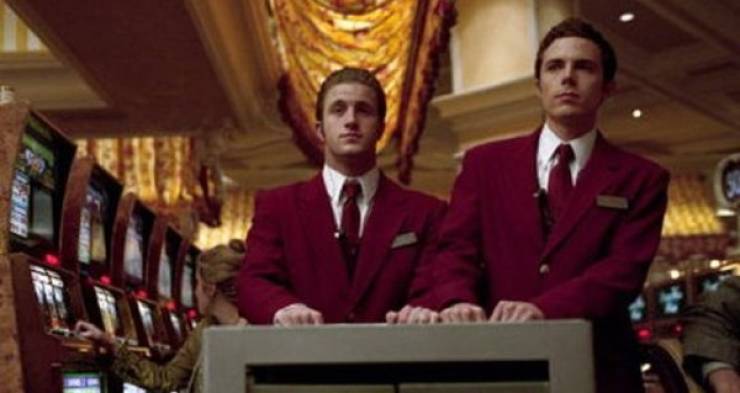 Screenwriter Ted Griffin was inspired by The Magnificent Seven and The Great Escape. He liked the way the men in those movies had a shorthand with each other that only they understood.

George Clooney had a keg of Guinness installed in his dressing room. 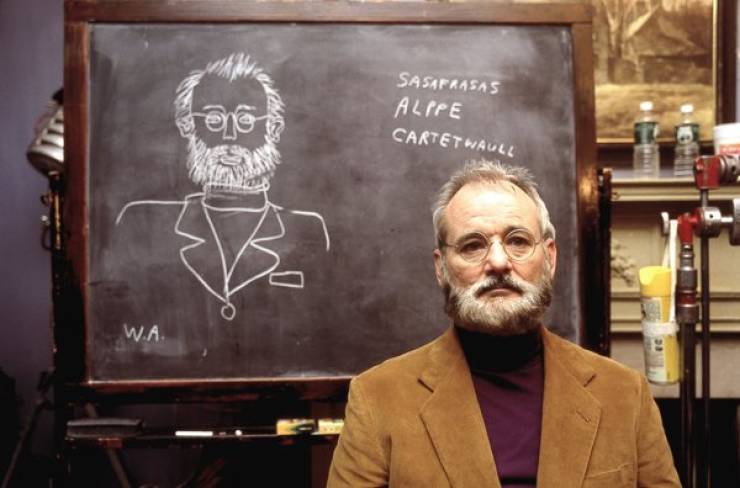 Bill Murray was supposed to play a lounge singer but the part was dropped when Murray was busy filming The Royal Tenenbaums. 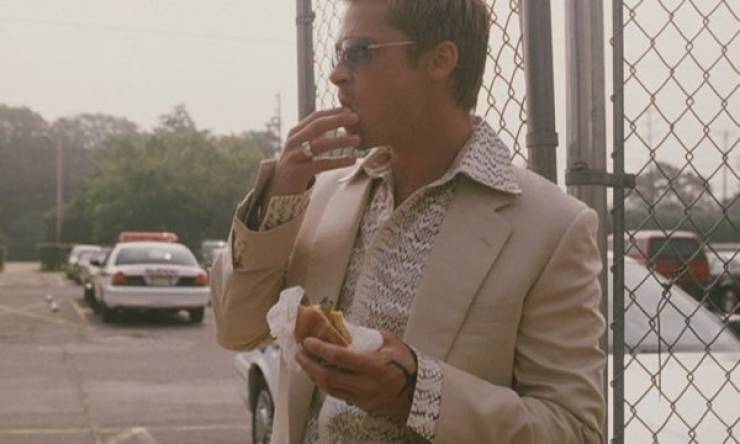 In nearly every scene Rusty’s in, he’s eating something. 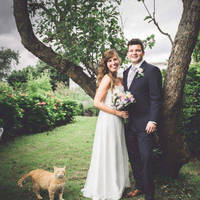 Cindy 10 month s ago
the original "Oceans 11" was a bad movie, don't think so? watch it and after that watch "Assault on a Queen" another stinker staring Frank Sinatra. and after that watch "Von Ryan's Express"
Frank Sinatra was not a great actor and apart from "From Here to Eternity" which he won an Oscar for his movies are just like Elvis movies without the singing
Reply