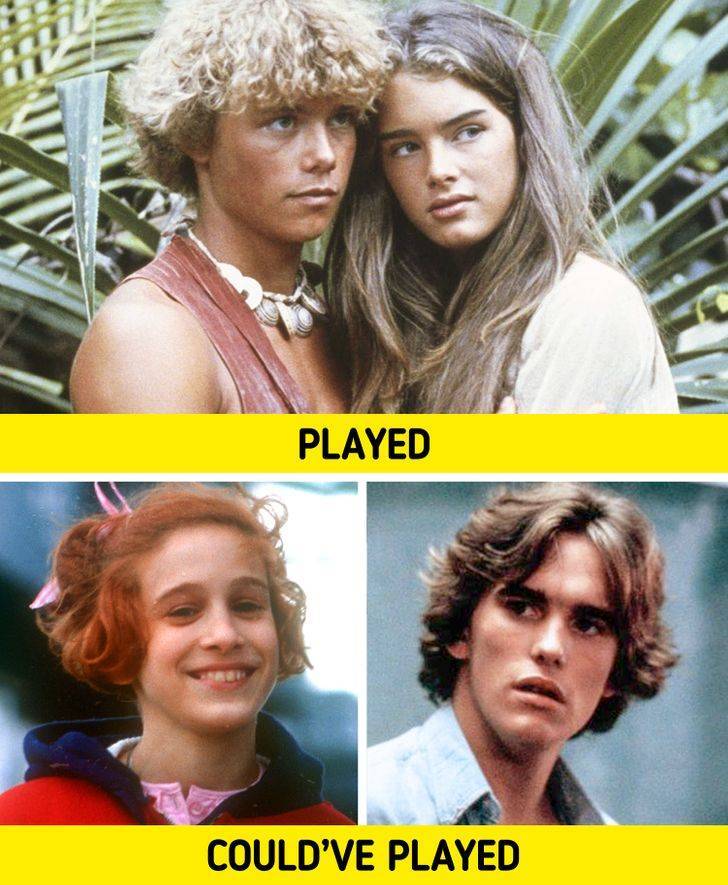 The main roles in this adventurous drama were played by Brooke Shields and Christopher Atkins. Though initially the plan was to invite other actors for the roles of Emmeline and Richard. But almost all of them turned the offer down because most of the screen time they were supposed to be half-naked. Some of those who refused were Sarah Jessica Parker and Matt Dillon.

Apart from them, the main characters could’ve been played by Kim Basinger and Sean Penn. Also, Michelle Pfeiffer, Jodie Foster, Daryl Hannah, Jamie Lee Curtis, Melanie Griffith, Bridget Fonda, and other famous actors were among those who refused to take part in the project. 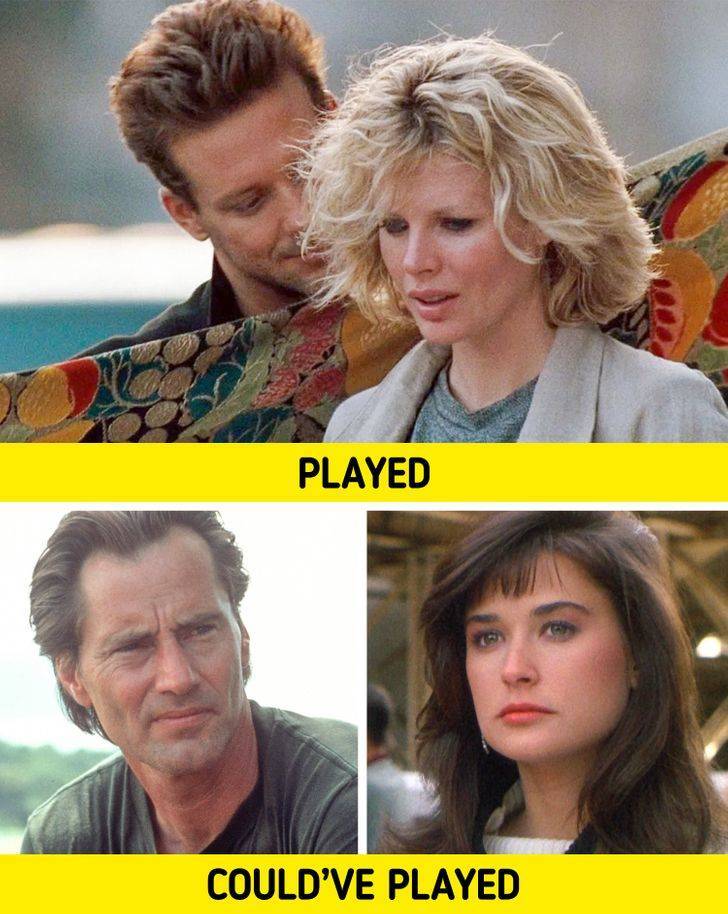 In this love story, Mickey Rourke played John Gray and Kim Basinger played Elizabeth McGraw. However, initially, the role of the main character was offered to Sam Shepard. What’s more, many actresses auditioned for the role of the female protagonist — for example, Demi Moore, Jacqueline Bisset, Teri Garr, Kathleen Turner, and Isabella Rossellini. 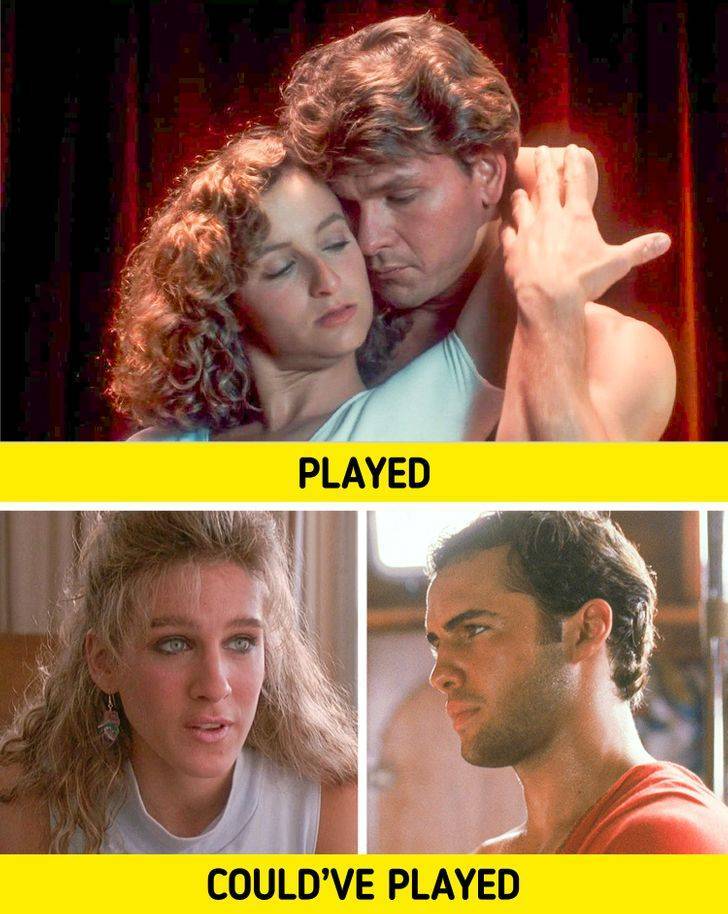 In this flick, the main characters were played by Jennifer Grey and Patrick Swayze. Though things could’ve been absolutely different with Sarah Jessica Parker and Billy Zane getting the main roles. 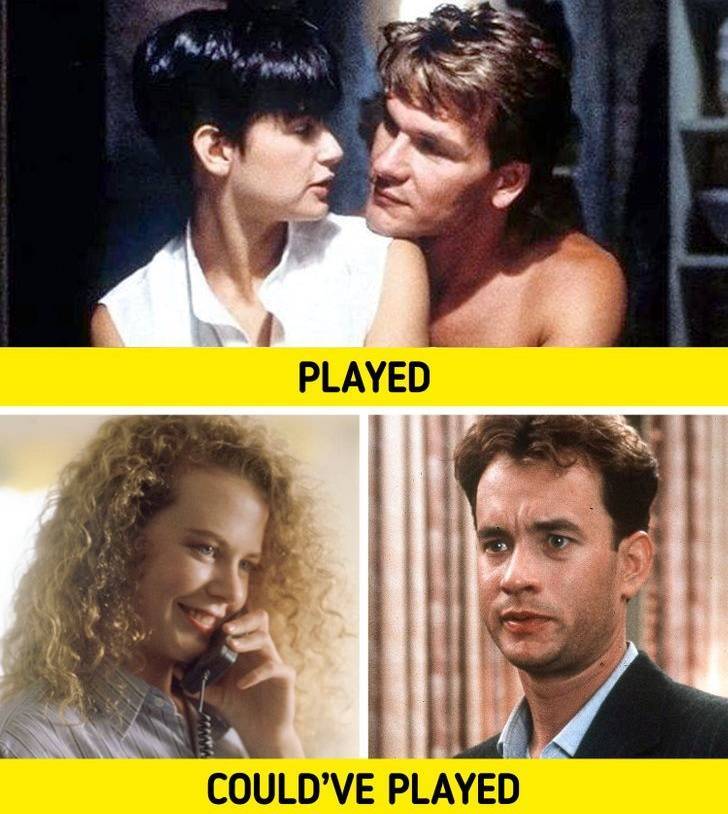 The main characters in one of the most romantic and touching movies of all time were played by Patrick Swayze and Demi Moore. However, director Jerry Zucker believed that Swayze was absolutely not suitable for the role of Sam. This character could’ve been played by Tom Hanks, Kevin Bacon, Alec Baldwin, Nicolas Cage, Kevin Costner, Tom Cruise, Johnny Depp, David Duchovny, Harrison Ford, Mel Gibson, Mickey Rourke, John Travolta, or Bruce Willis. But they all turned the offer to take part in the project down, feeling that playing a ghost would be cheesy. Eventually, Zucker auditioned Swayze and approved him for the role.

Molly, in her turn, could’ve been played by Nicole Kidman. The film creators even liked her audition but eventually, they gave in to someone who was more famous at the time, Demi Moore. 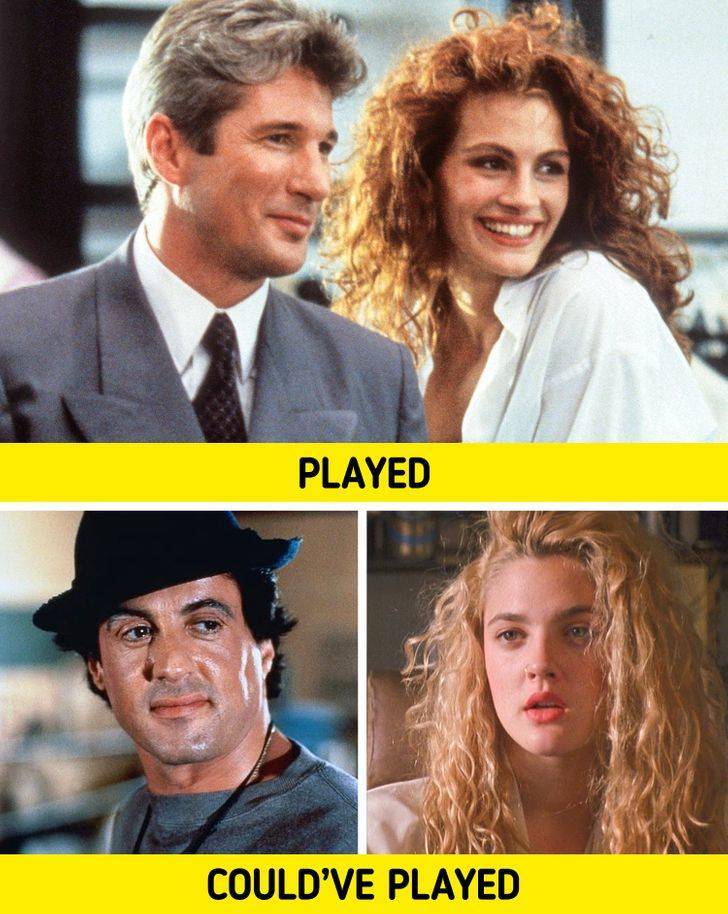 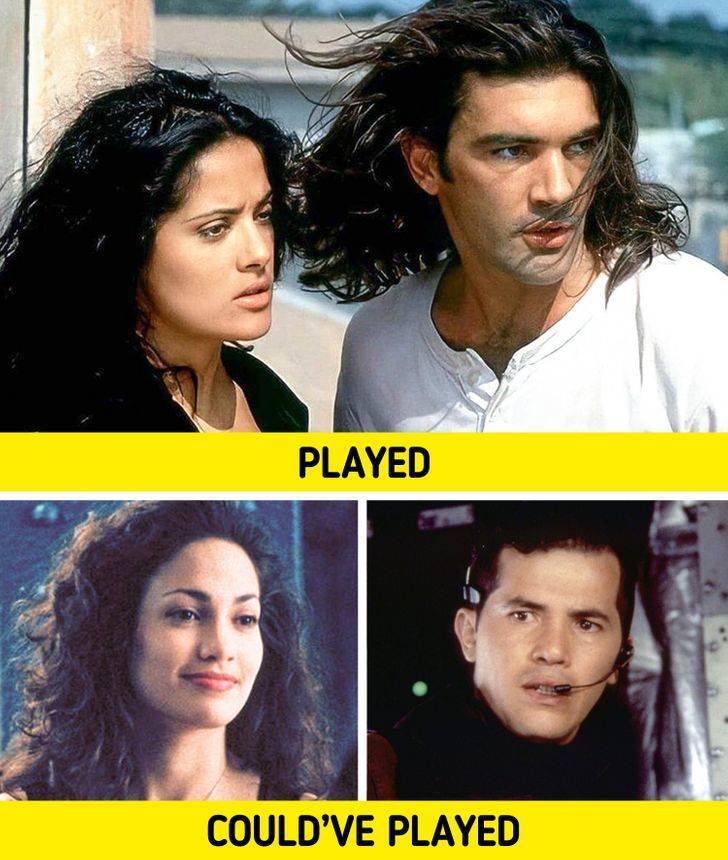 This action movie directed by Robert Rodriguez brought fame to Antonio Banderas and introduced Salma Hayek to an American audience, who was already famous in her native Mexico. However, the role of El Mariachi could’ve easily gone to John Leguizamo if Banderas had refused to take part in the flick. Jennifer Lopez, in her turn, auditioned for the role of Carolina. 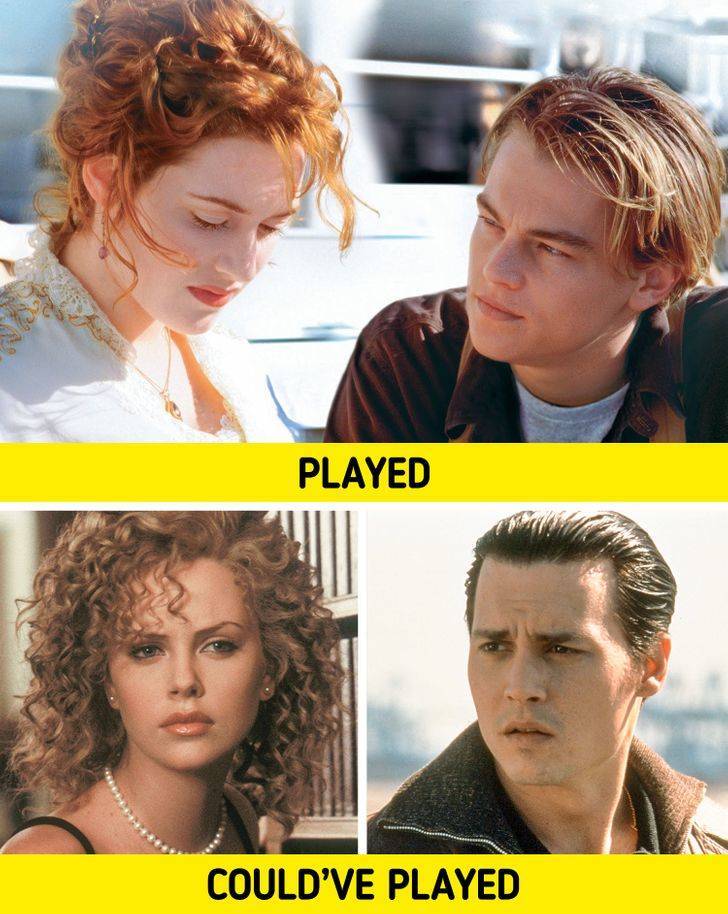 Instead of Leonardo DiCaprio and Kate Winslet, the main roles in the legendary movie directed by James Cameron could’ve been played by Johnny Depp and Charlize Theron. By the way, Depp himself refused to take part in the movie, and regretted it afterward. 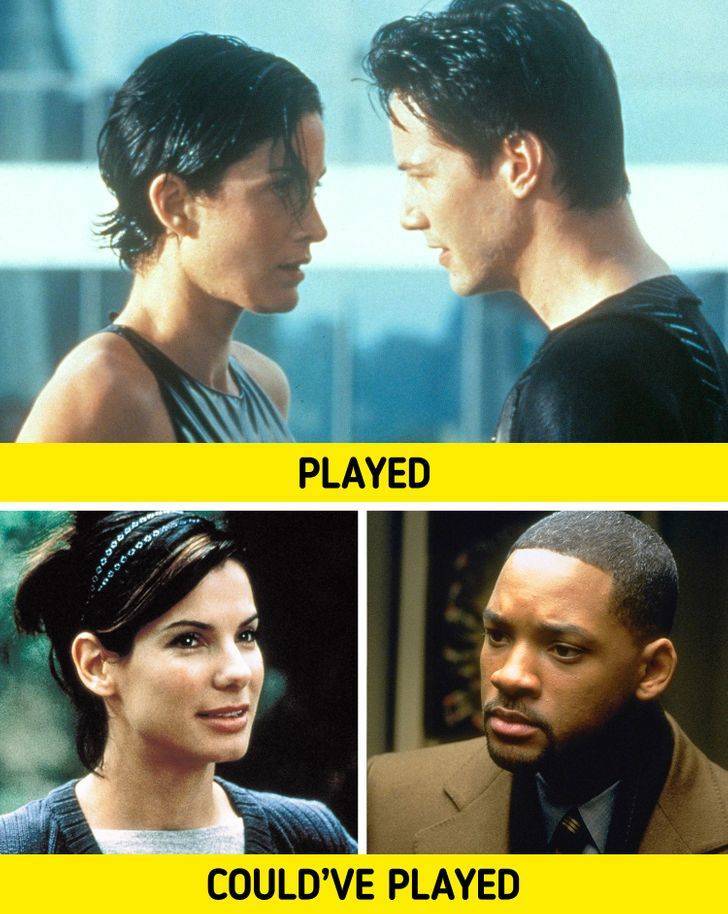 The main roles in this movie, which heavily affected any action movies that followed it and the whole cinema industry in general, were played by Keanu Reeves and Carrie-Anne Moss. Though initially the role of Neo was offered to Will Smith but he refused it, having not understood the idea behind the movie. Trinity could’ve been played by Sandra Bullock, but the actress also refused to take part in the project. 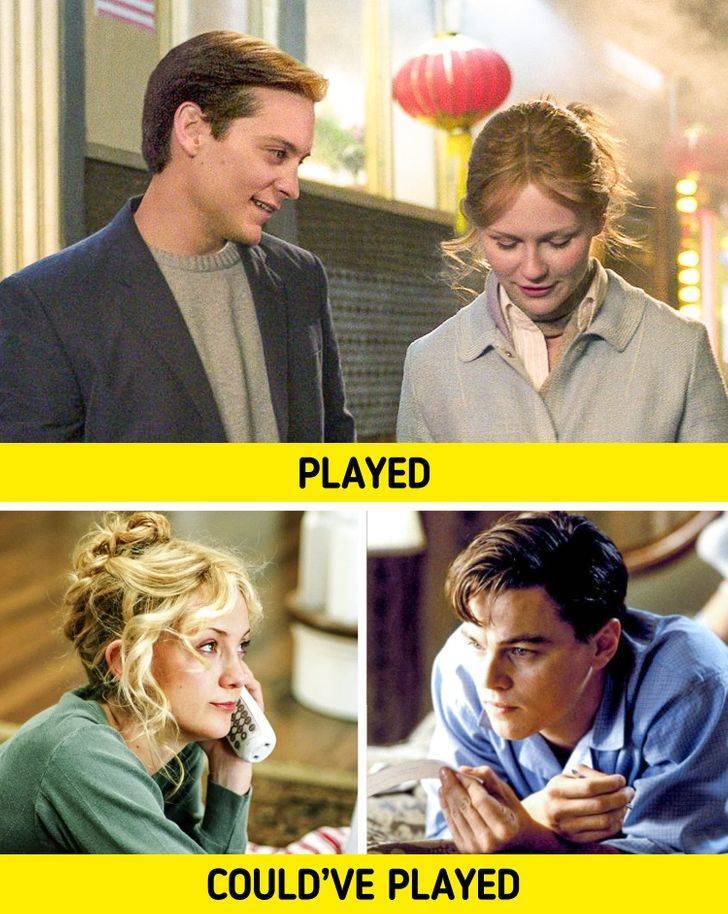 Everyone remembers that the main characters in this superhero movie were played by Tobey Maguire and Kirsten Dunst. As interesting as it might sound, the role of Spider-Man could’ve easily been played by Leonardo DiCaprio and his beloved woman could’ve been played by Kate Hudson. 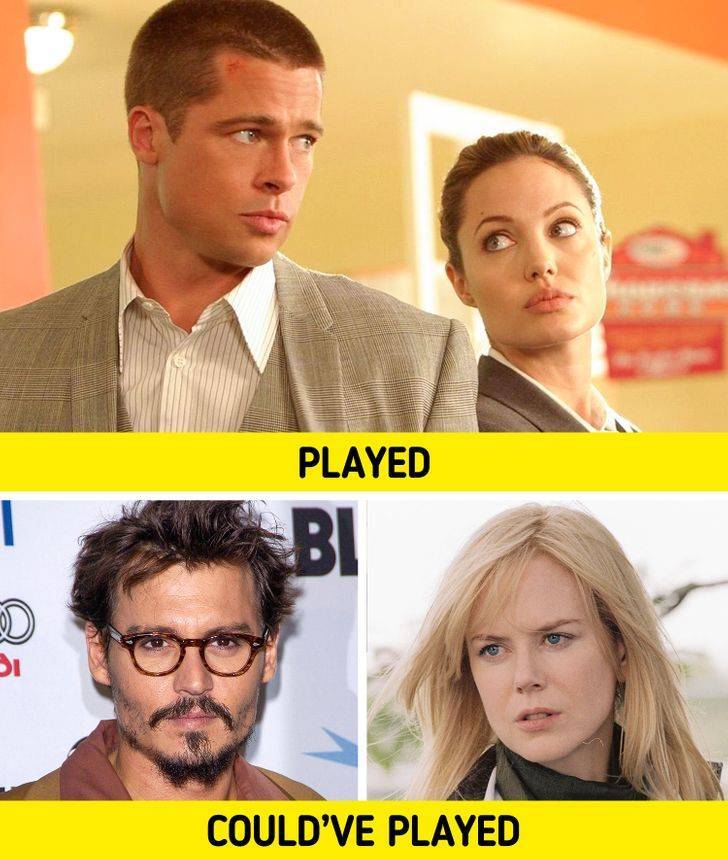 This couple is considered to be one of the most beautiful movie couples. And it’s hard to even fathom that the main roles could’ve been someone other than Brad Pitt and Angelina Jolie. For example, the role of John Smith could’ve been embodied by Johnny Depp or Will Smith (if Brad Pitt hadn’t signed the contract). His partner, Jane Smith, was almost played by Nicole Kidman.

Catherine Zeta-Jones, Eva Green, and Cate Blanchett were also considered for the role of Mrs. Smith. 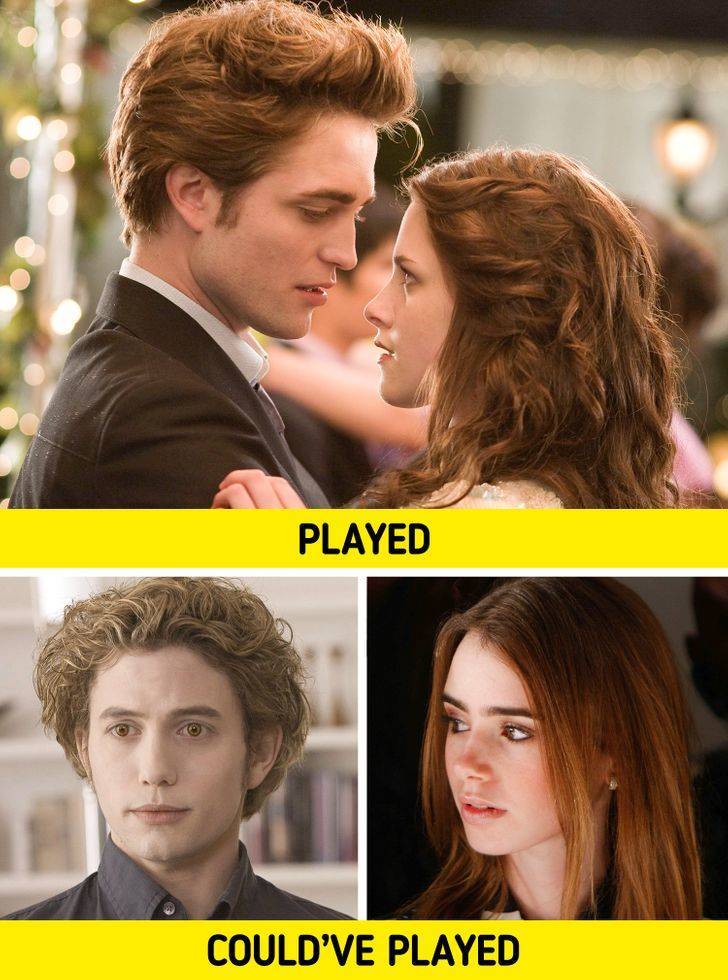 The main roles in this vampire saga, that became one of the most popular movies in cinematography worldwide, were played by Robert Pattinson and Kristen Stewart. At the same time, more than 5,000 actors auditioned for the role of Edward. Apart from Pattinson, Jackson Rathbone (who was later given the role of Jasper) was among the finalists. As for the female protagonist, the actress Lily Collins was considered for the role of Bella Swan. The main roles in this flick were played by Jamie Dornan and Dakota Johnson. Initially Christian Grey was supposed to be played by Charlie Hunnam but after 2 months of shooting he left the project due to a very tight work schedule.

Anastasia Steele, in her turn, could’ve been played by Shailene Woodley but things went a different way.