Bride Demands $400 From Every Guest, Gets Backlash From The Internet (22 PICS) 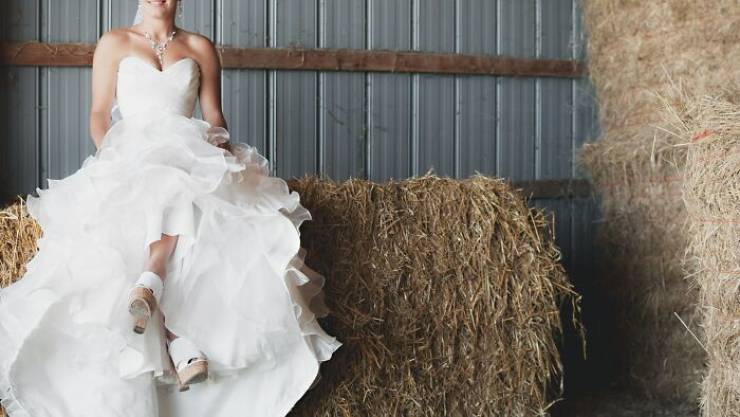 The post shared on Reddit’s online community ChoosingBeggars dedicated to posting screenshots, pictures, or stories of people who are being way too picky when begging for things, received over 11.7k and 1.2k comments. It was also reposted on Reddit’s weddingshaming community, which is self-explanatory and has a really fun tagline that reads “a place to shame wedding themes, brides, grooms, wedding party, in-laws, outlaws, guests, Uncle Bob, vendors… you name it, we shame it!”

The future bride, whose identity is anonymous, posted a quite extensive list of gifts for her guests to choose from. At the beginning of the list and at the end she clearly states that there are no exceptions, but she could make some slight changes if it’s discussed with her prior.

The bride was immediately branded as selfish by Reddit community users for expecting her guests to invest $400 dollars minimum on items such as Gucci or Louis Vuitton purses, gift cards from luxury stores, Korean beauty products, Calvin Klein or Moschino clothing. And all of that came with a spreadsheet to make sure the gifts won’t be duplicates. The comments flooding in from the shocked online community members were pretty funny, grasping at the high expectations the bride has and what her idea of wedding gifts is. 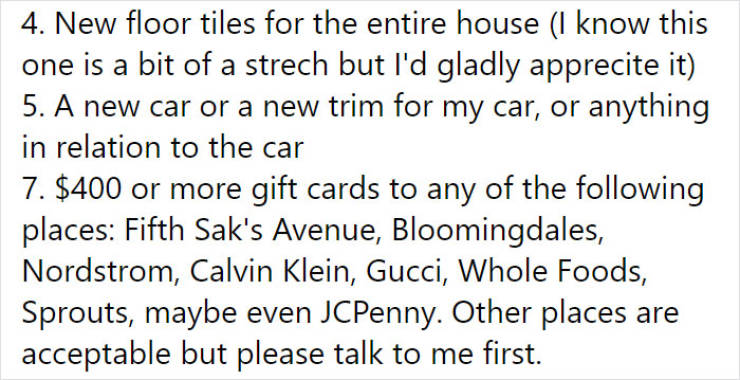 One Reddit user also pointed out was that none of the items were for the groom and it seemed that all of the gifts were for her. The bridezilla also encouraged her guests to promptly choose their items to give so that they wouldn’t have to buy her something they wouldn’t like to get her: “Remember to apply early if you don’t want to get me a Gucci purse or anything you don’t want to get.” 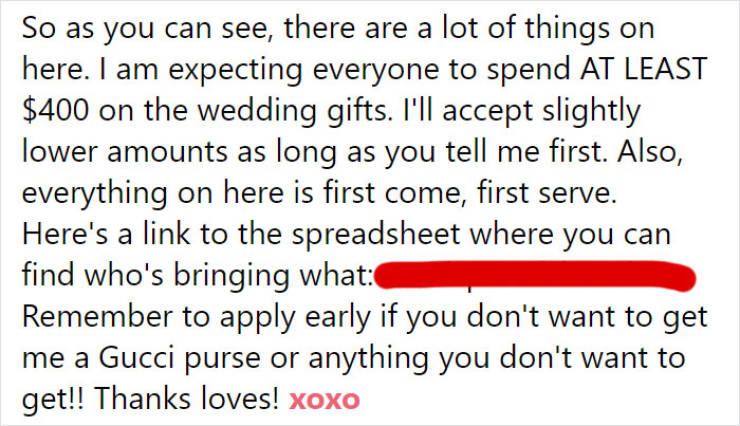 Reddit users were absolutely shocked, some were laughing about it, and some came up with ingenious ideas of how they would teach the greedy bride if they were to be guests at the wedding 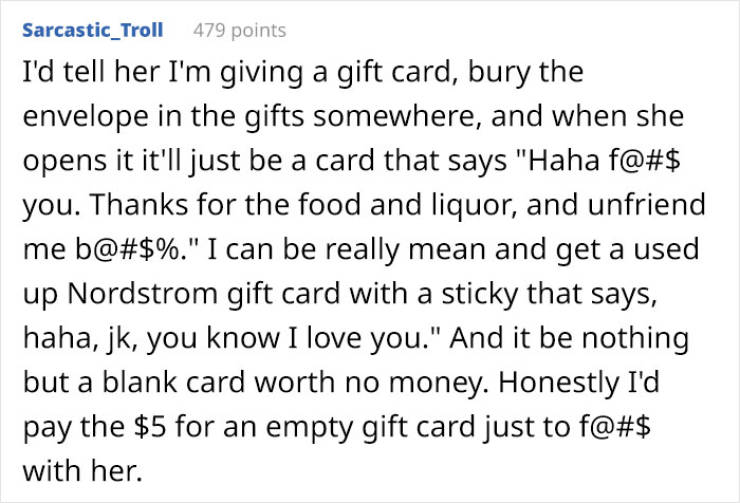 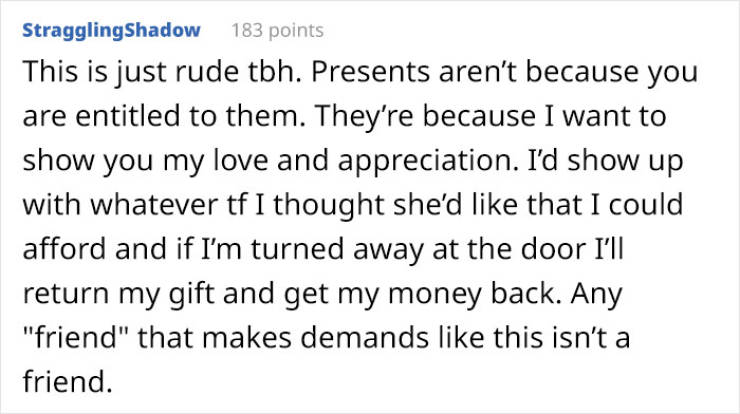 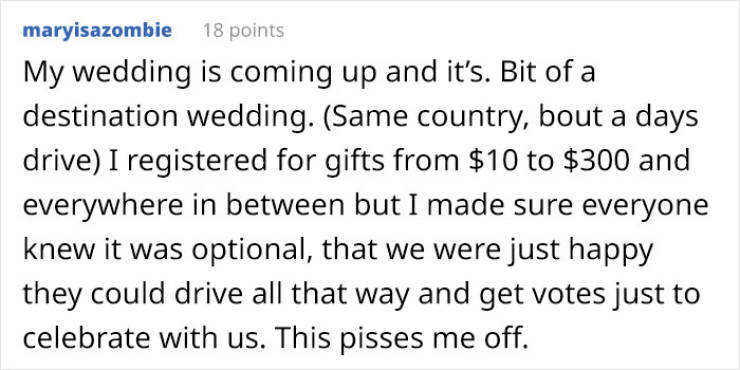 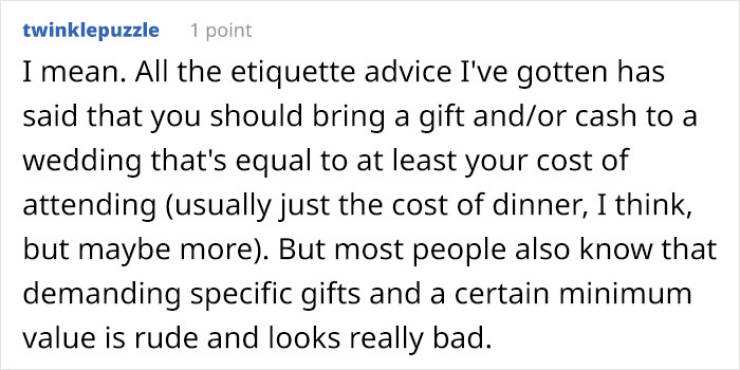 salamoon 1 year ago
what a great way to have a small wedding.... as most guests will not come after this.
Reply
4 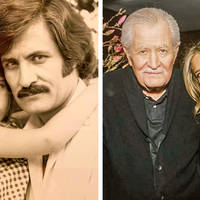 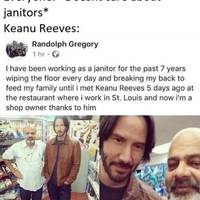 Obediah 1 year ago
She must be marrying a toaster or one of her thirty cats...
Reply
2 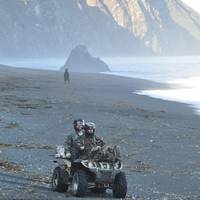 Indie 1 year ago
Why do people waste their time raging about other people's business? Jeez - the bride either lost a couple of friends or they all think the same. I personally think that to comment such stuff is ridicoulus. That actually includes this commend I'm writing here. Jeez.
Reply
0

so, why did you waste your time? 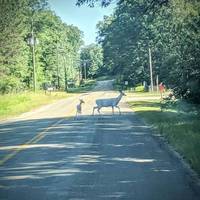 Earnest 1 year ago
It’s time we name them. Equality. A guy would be named immediately.
Reply
1 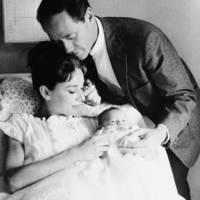