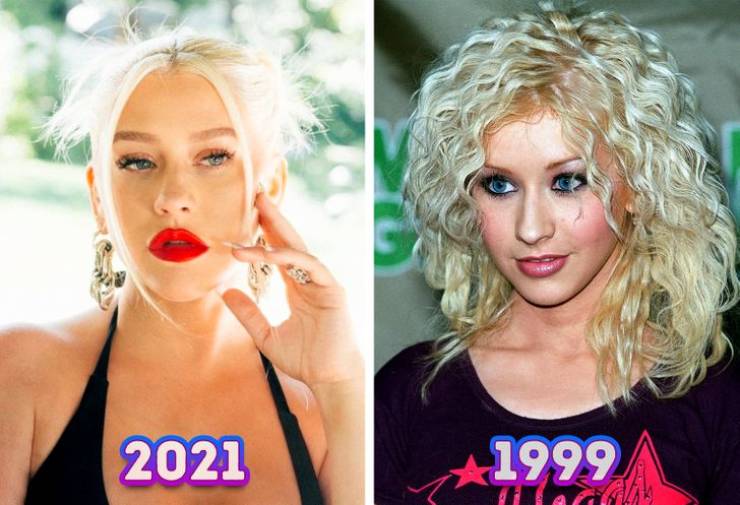 People have been calling her the “Voice of a Generation,” and she is one of the artists who managed to revive teen pop in the late ’90s. Aguilera has always used her vocals to reveal the most important problems of society. She has often changed her image and is known for her extravagant and original looks. She started her music career in 1999 and now, in 2021, her shows are still sold out. 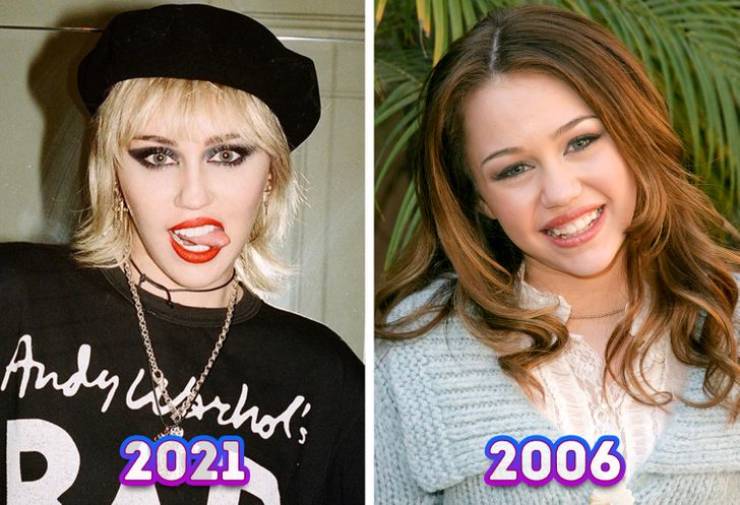 We got to know Miley as a teen idol when she portrayed the main character in the television series Hannah Montana (2006–2011). Miley was inspired by Britney Spears, Madonna, and Christina Aguilera, and she managed to build a strong singer career that is in its full swing in 2021. 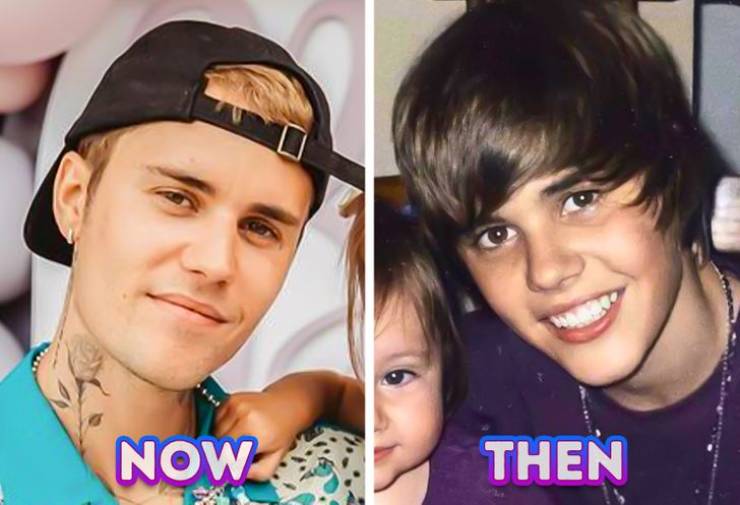 Justin’s popularity skyrocketed in 2010 when he released his first studio album My World 2.0. Time named Bieber one of the 100 most influential people in the world in 2011, and he was included on Forbes’ list of the top 10 most powerful celebrities in 2011, 2012, and 2013. Since then, he has not stopped his career and is happily married to Hailey Bieber. 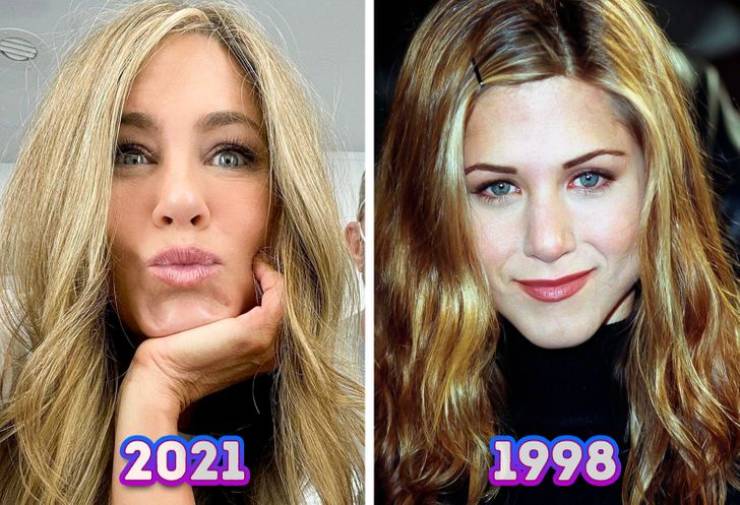 Aniston completely won our hearts in her role as Rachel Green on the television sitcom Friends (1994–2004), for which she earned numerous awards. She has since played starring roles in many dramas and romantic comedies and has been included in various ratings of the world’s most beautiful women. 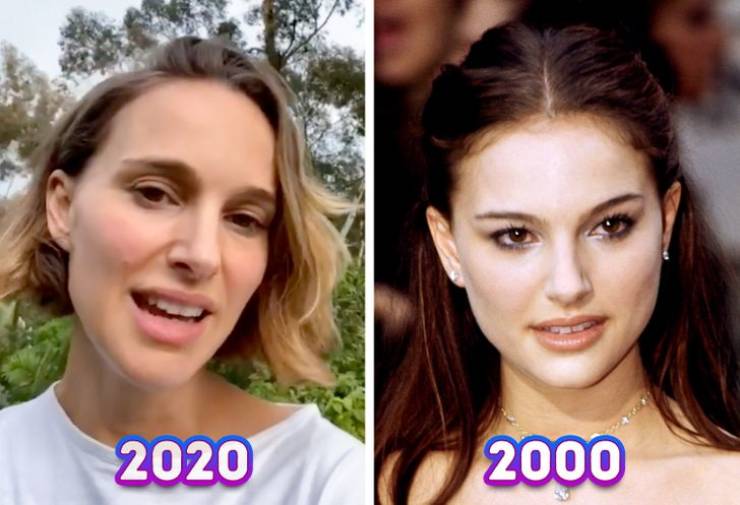 Portman started her acting career at the age of 12 when she starred as the young friend of a hitman in the film Léon: The Professional (1994). Since then she has played many outstanding roles, among which is the role of Jacqueline Kennedy in the biographic film Jackie (2016), and she has a lot of upcoming projects which are being made in collaboration with studios like Disney. 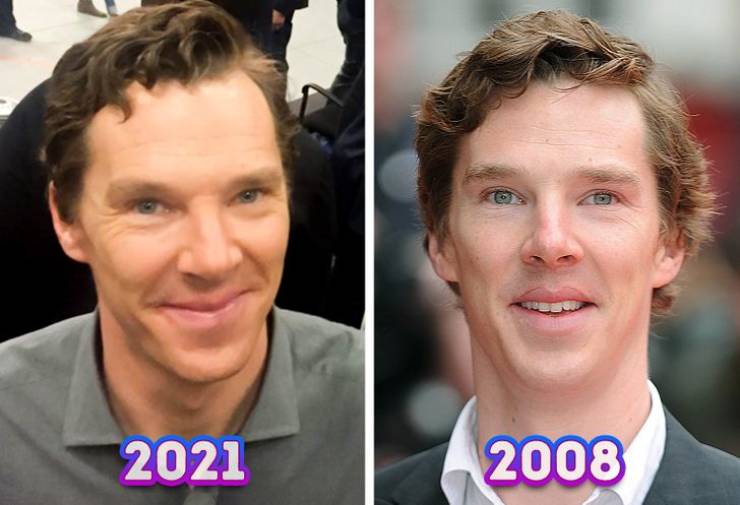 Cumberbatch gained worldwide recognition for his performance as Sherlock Holmes in the BBC series Sherlock from 2010 to 2017. Because of his outstanding talent and extraordinary appearance, he has been called “The Thinking Woman’s Crumpet” and is still popular and present on TV, radio, and in the theater. He also owns his own production company. 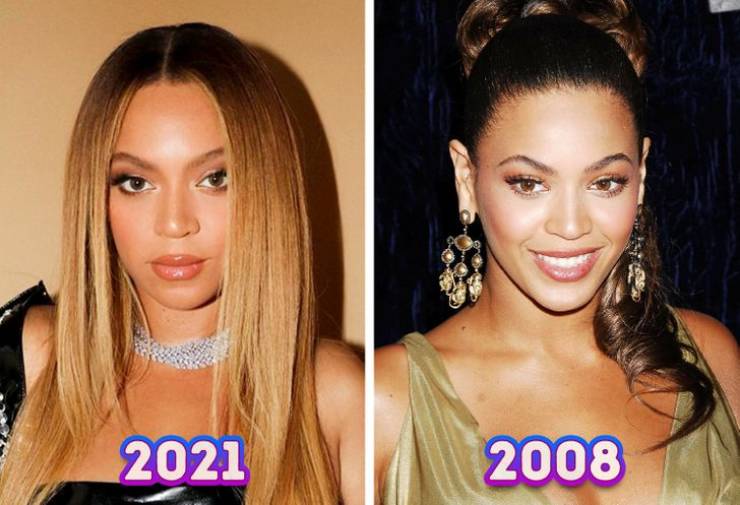 After the disbandment of Destiny’s Child in 2006, Beyoncé started her solo career which has been a huge success. She is considered one of the world’s best-selling artists, as she has sold 118 million records worldwide.

Apart from her singing career, Beyoncé starred as the voice of Nala in the remake of The Lion King, which was seen by the world in 2019. She is also featured on the film’s soundtrack, “Can You Feel the Love Tonight.” Beyoncé is happily married to Jay-Z and they both never seem to tire of pleasing their fans with posh and comical photoshoots on their Instagram accounts. 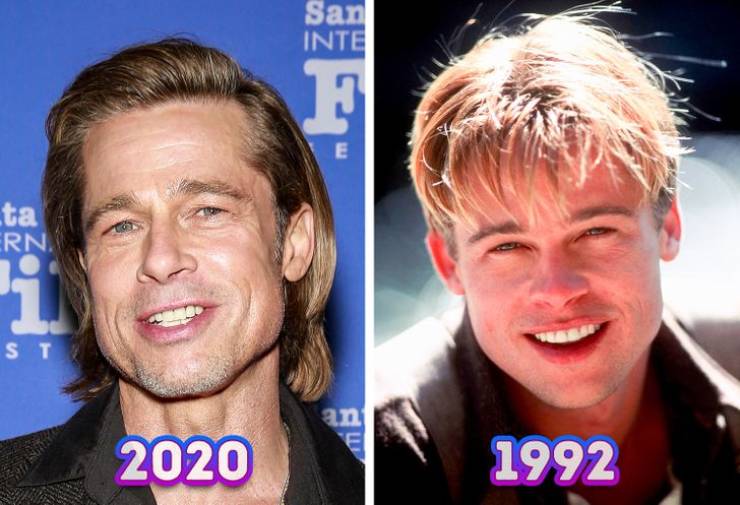 Pitt first became famous as a cowboy hitchhiker in the film Thelma & Louise (1991). Since then he’s starred in many iconic movies like Fight Club (1999). Pitt has been listed as one of the most powerful and influential people in the US entertainment sphere.

For many years, he was called the world’s most attractive man by various media sources, and his personal life is always a subject of interest. He was married to actresses Jennifer Aniston and Angelina Jolie. Pitt has 6 children with Jolie, 3 of whom were adopted from different countries. 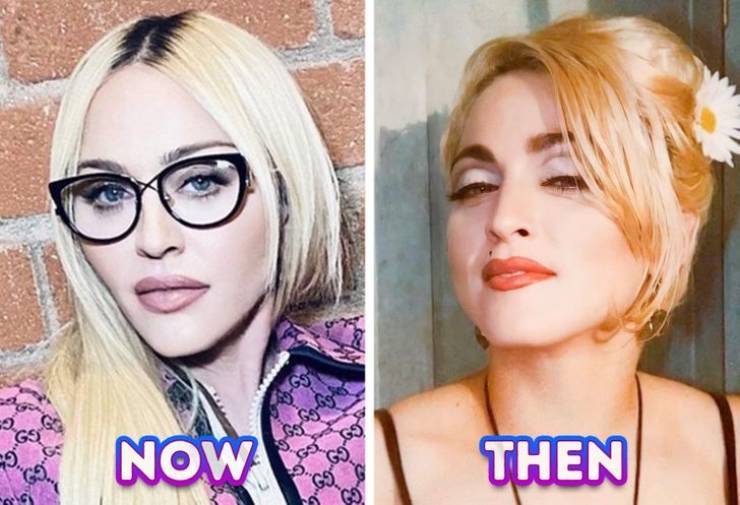 After performing as a drummer, guitarist, and vocalist in rock bands, Madonna began her stardom with her debut studio album, Madonna (1983). Then came a series of tremendously successful albums, including all-time bestsellers Like a Virgin (1984) and True Blue (1986) as well as Grammy Award winners Ray of Light (1998) and Confessions on a Dance Floor (2005).

Madonna has released many number-one singles throughout her career, including “Like a Virgin,” “La Isla Bonita,” “Like a Prayer,” “Vogue,” “Take a Bow,” “Frozen,” “Music,” “Hung Up,” and “4 Minutes,” Now, she is actively working on an autobiographical project called Madame X and an autobiographical film. 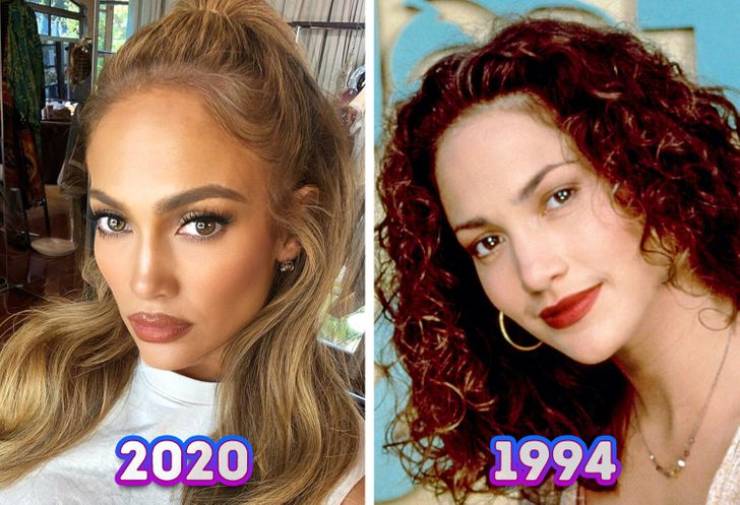 Lopez began her career as an actress in 1993, and the first film with her leading role earned over $1 million. Later she was considered the highest-paid Latin actress in Hollywood. Her first studio album On the 6 (1999) and a role in the psychological horror The Cell (2000) were the beginning of her magnificent career. In 2021, JLo reunited with her ex Ben Affleck and their kiss in Malibu has become one of the most discussed pieces of entertainment news. 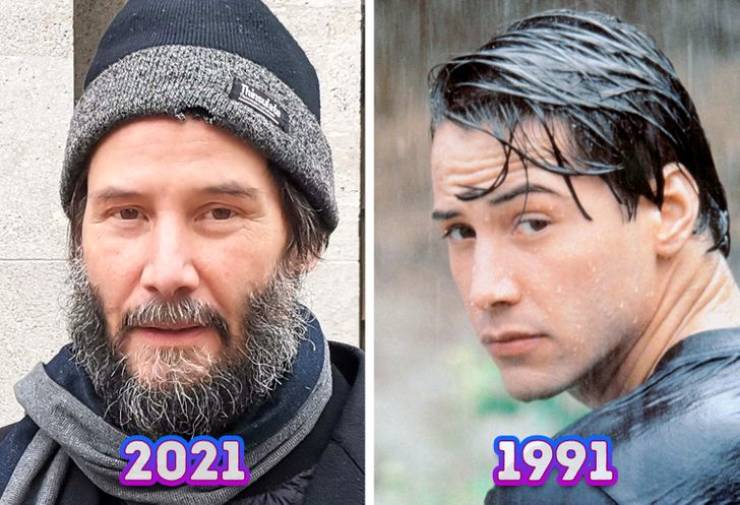 The dawn of Keanu’s fame came when he starred in the horror film The Devil’s Advocate (1997) and after playing Neo in the science fiction series The Matrix (1999). He later played John Constantine in Constantine (2005) and starred in the romantic drama The Lake House (2006). Reeves is famous for his philanthropy and he never hesitates to help other people, but despite his huge charity activities, he remains very introverted and shy. 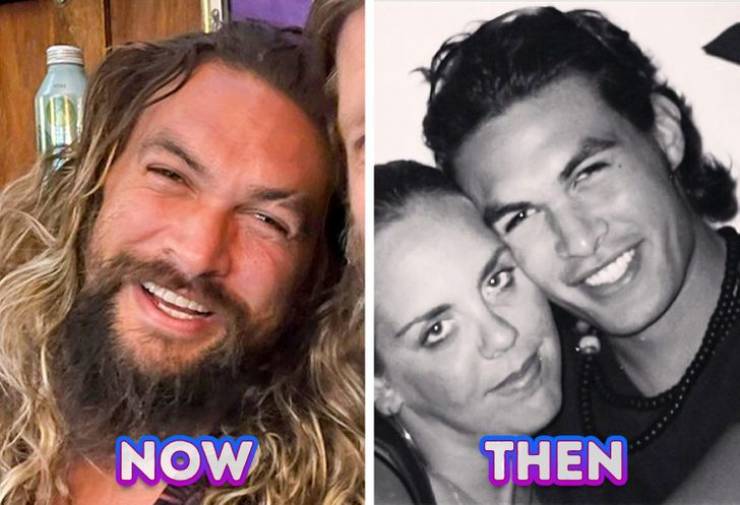 Momoa began his career as a model in 1999, and also worked part-time in a surf shop before he became tremendously popular playing the role of Khal Drogo in Game of Thrones. In 2014 he starred in Aquaman which brought him even more popularity. Now, Momoa is happily married to the ex-wife of Lenny Kravitz, Lisa Bonet, and their marriage is considered to be one of the most iconic in Hollywood. 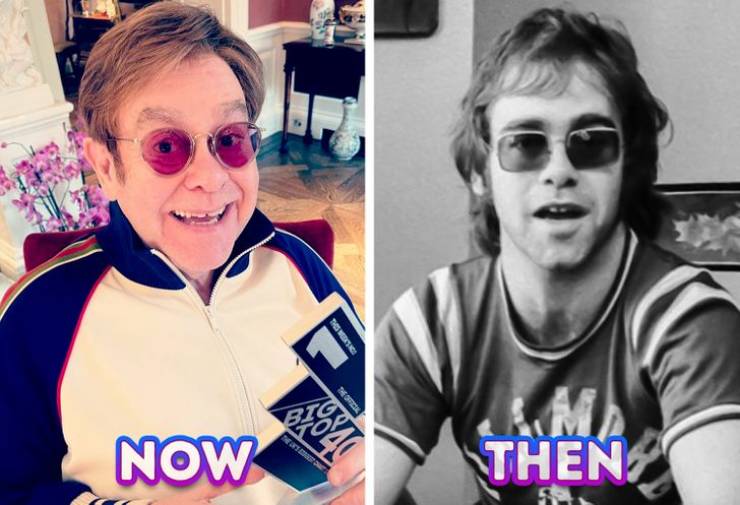 A singer, songwriter, pianist, and composer, Elton John began his career at the age of 15 as a pub pianist. In 1972 he legally changed his name from Reginald Kenneth Dwight to Elton John, which was a combination of the names of saxophonist Elton Dean and vocalist Long John Baldry in the band Bluesology. He became equally famous for his costumes and his live shows. His song “Can You Feel the Love Tonight,” brought John his first Academy Award win for Best Original Song.

In 2021 he released a vinyl-only album titled Regimental Sgt. Zippo, which is a tribute to his first debut album from 1968. 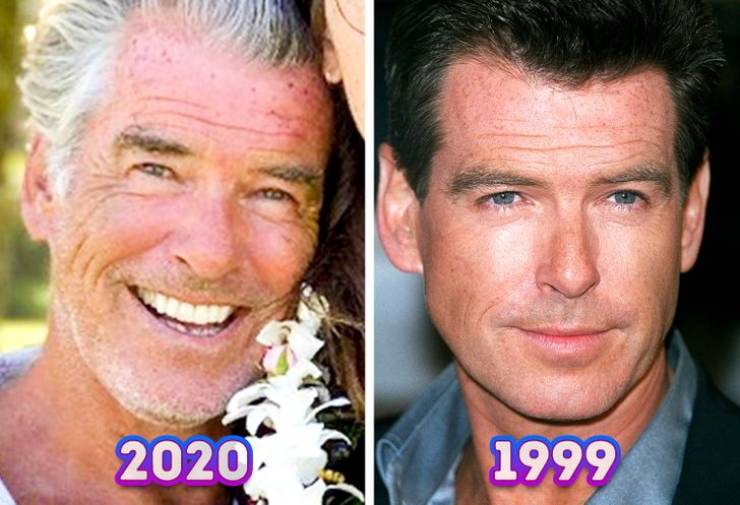 Brosnan is was perhaps best known for playing James Bond in a series of films. His first film in the series, GoldenEye (1995), made more than $350 million worldwide, the biggest sum for a Bond film at that time. Being a very enthusiastic actor, Brosnan is now busy with new projects. The upcoming project with Brosnan is the film Black Adam which is going to be released in 2021. 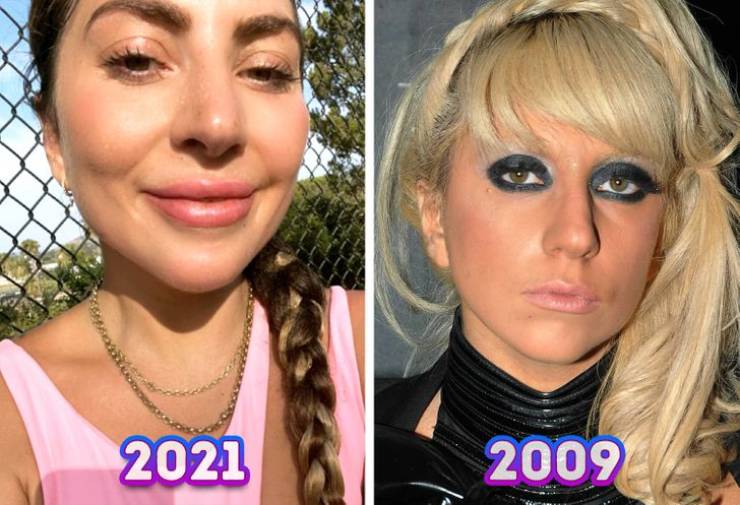 Lady Gaga has always been known for her flamboyant costumes and live shows that keep her fans mesmerized. She used to write songs for other pop artists like Fergie, the Pussycat Dolls, and Britney Spears. Her first single, Just Dance, became popular in clubs throughout the United States and Europe and was number one on the Billboard Pop Songs chart. Now Lady Gaga is most well-known for defending gay rights and being one of the most outstanding speakers on this topic. 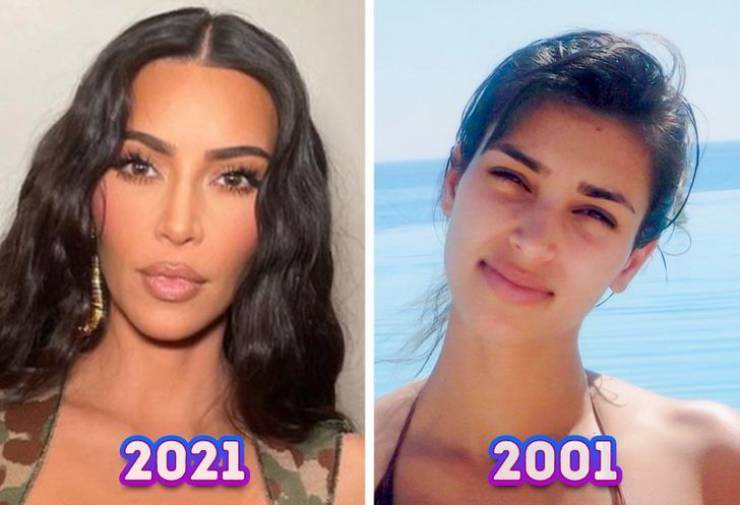 Kim gained worldwide fame for her personal life, the bigger part of which was chronicled in the popular reality series Keeping Up with the Kardashians (2007–21). Her tremendous popularity also gave her film roles—she made her debut in Disaster Movie (2008). Kim also starred in Kourtney and Kim Take New York (2011–12). Now Kim is concentrated on promoting her own brand and leads an active life as a beauty ambassador and designer. 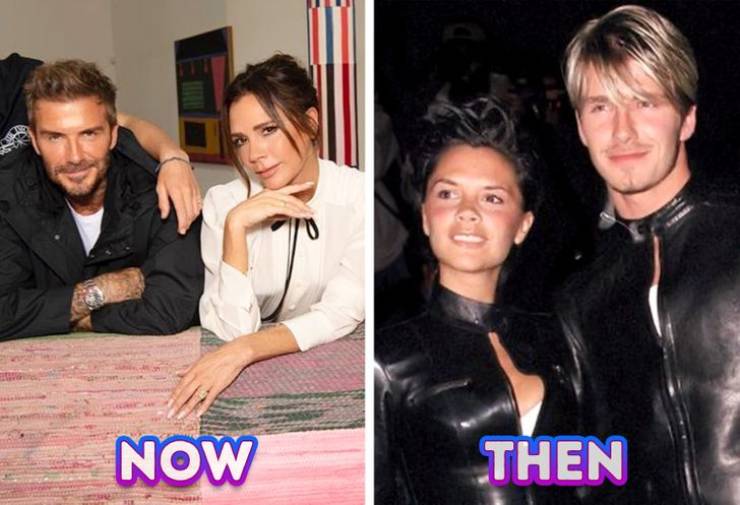 Victoria Beckham (then Adams) gained fame in the mid-1990s as a member of the pop band the Spice Girls and later launched a successful line of clothing and accessories. Her relationship with her husband, soccer player David Beckham, started in 1997 and they’ve been happily married since 1999. Now Victoria has switched off from her singing career to a successful journey as a fashion designer. 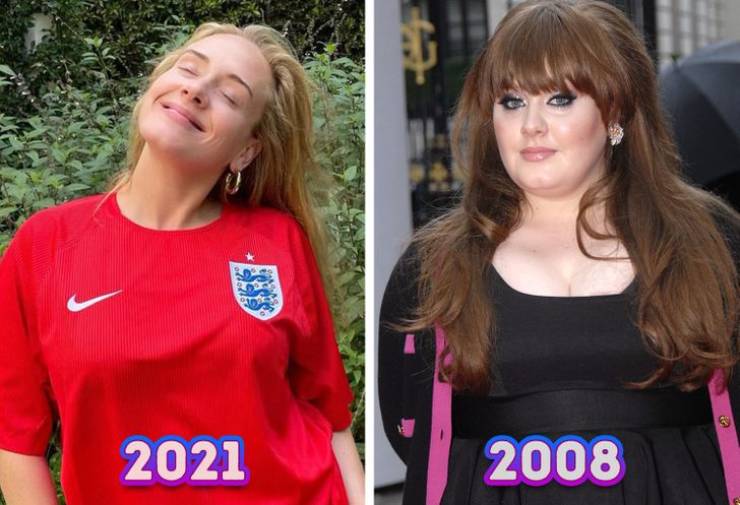 Adele became popular when her friend posted songs that Adele had written on the website MySpace. Her music finally caught the attention of record labels, and in 2006 she signed a contract with a recording company. Her songs Rolling in the Deep and Someone Like You hit number one in many countries and her fame has grown ever since. 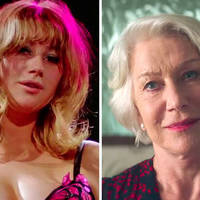 Suzanne 9 month s ago
I will never, under any circumstances understand what the draw was/is for any Kardashian. Once their warpaint/makeup is removed they are average at best.
Reply
21 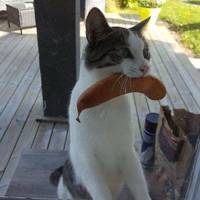 Rella 9 month s ago
Suzanne, everything I know about the kardashians (which I admit fortunately isn't much) I learned against my will.
Reply
0 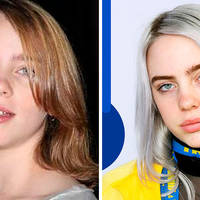 I recon she likes to take it in the arse. Then I giggle a little...
Reply
1 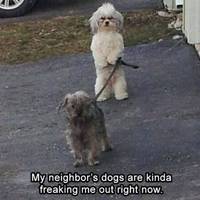 Elysia 9 month s ago
#7 Beyonce - what an America hating cuntcicle she it. And ugly AF. And can't actually sing for shit. Hope she enjoys her shared Herpes that her ugly AF husband gave her AND Rihanna.
Reply