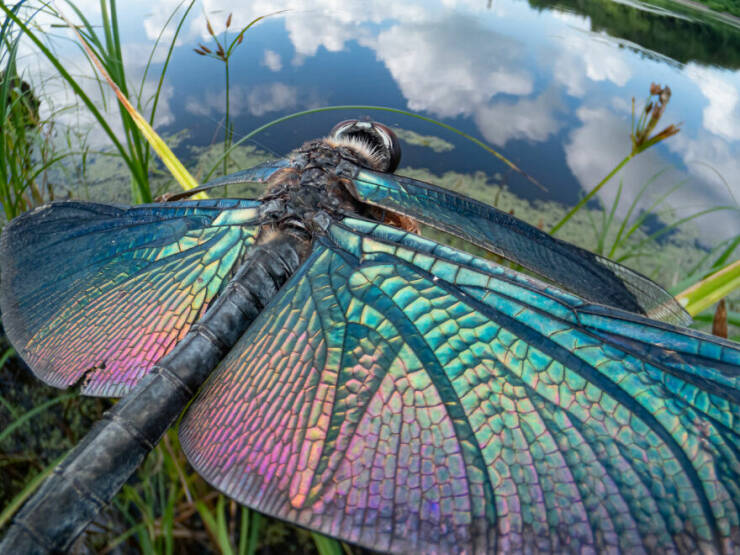 "Taken while the dragonfly rested in a swamp, this photographer’s close-up allows its magnificent wingspan to truly shine. Dragonflies in cooler climates tend to have more color in their wings than their warmer temperature counterparts, which makes a rainbow-winged dragonfly in the historically hot and humid July weather in Japan so dramatic."

Aquatic Life Finalist - "Danger In The Mud" By Jens Cullman 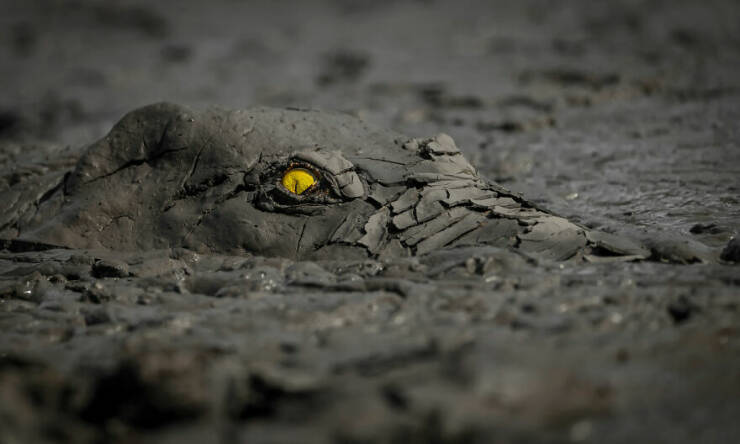 "Though the Mana Pools National Park has been beset by an ongoing drought, this photographer managed to discover a captivating crocodile lying in wait in a nearly dried-out pool. These muddy pools are often the site of wildlife rescues, including two baby elephants in February of 2022." 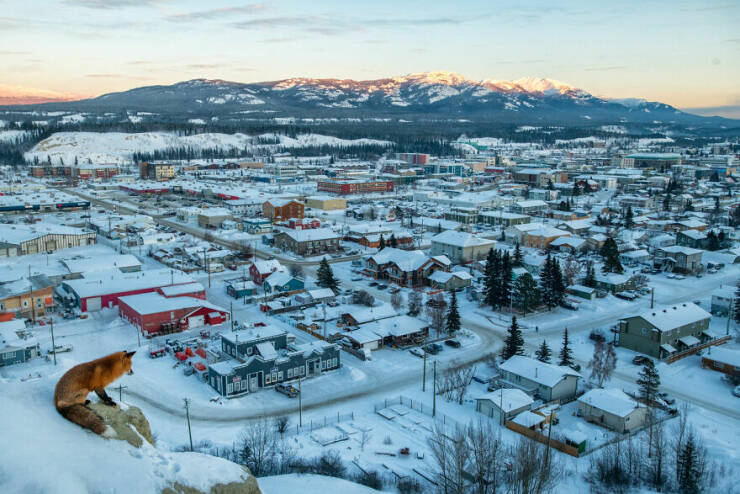 "After working with them for months, this photographer got to know the behavior of the local red foxes well enough to anticipate this one's arrival at a favorite outcrop overlooking the city."

"Its formerly brown coat now completely white thanks to the cold climate, a stoat makes an unusual appearance from its underground burrow to give our photographer a glimpse during an unexpected wintry jump. Could it be joy?"
4 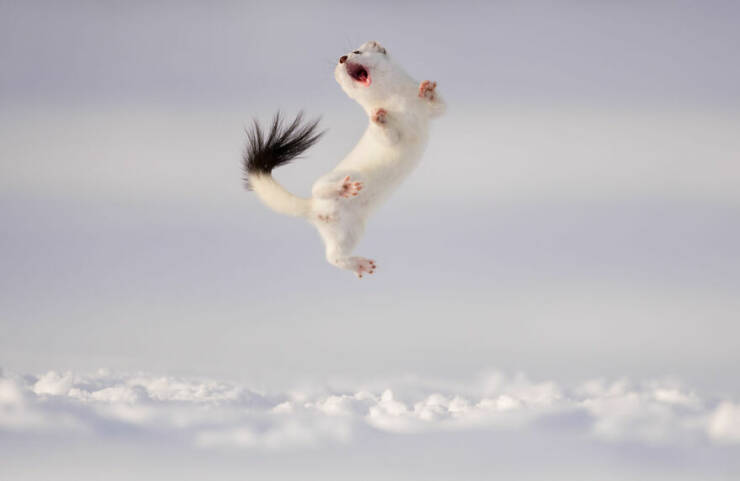 Winged Life Winner - "Frame Within A Frame" By Sitaram Raul 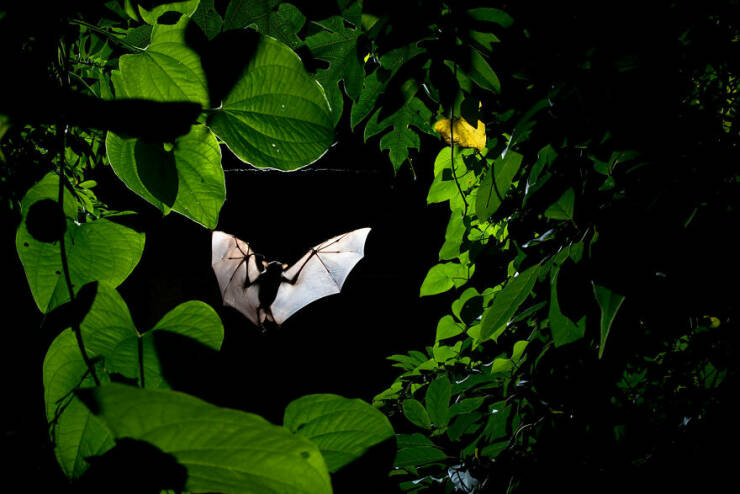 "A fruit bat majestically makes its way to a custard apple tree for a feast, finding itself perfectly placed within the canopy opening. It’s no coincidence that the framing is so precise; the photographer spent nearly three weeks observing these bats’ behavior as they frequented the fruit tree, learning their habits and finally capturing this photo when the moment presented itself." 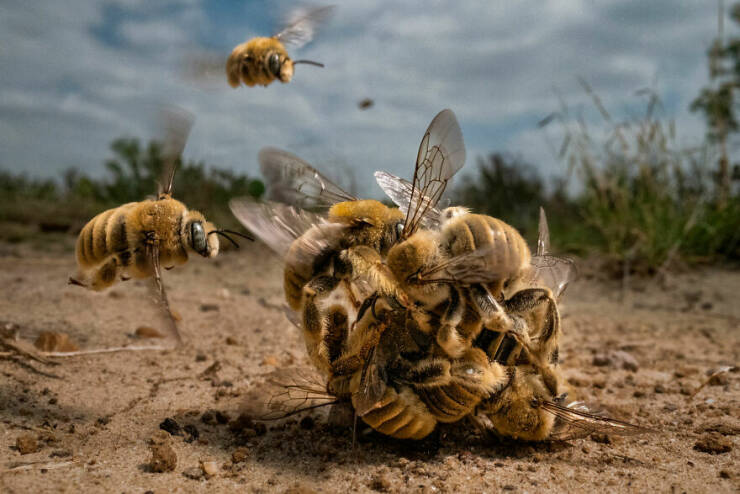 "A rare moment captured up close: Diadasia rinconis (Cactus Bees) swarming together in a mating ball, each male eager to become companions with a female. Native to America, these bees are considered a solitary species, meaning they live without the hierarchy and structure of their European counterparts—though they still work to pollinate cacti and help plants in the American southwest thrive."

Terrestrial Wildlife Finalist - "Ghost Of The Mountains" By Sandesh Kadur 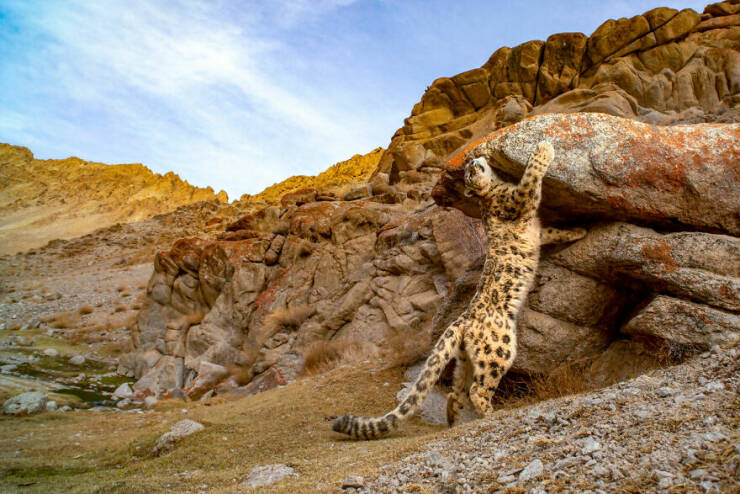 "Snow leopards are masters of disguise, able to camouflage quickly in their harsh, mountainous habitats. Before technological advancements in trap photography, one could only catch a fleeting glimpse—thus earning them the nickname ‘ghost of the mountains’." 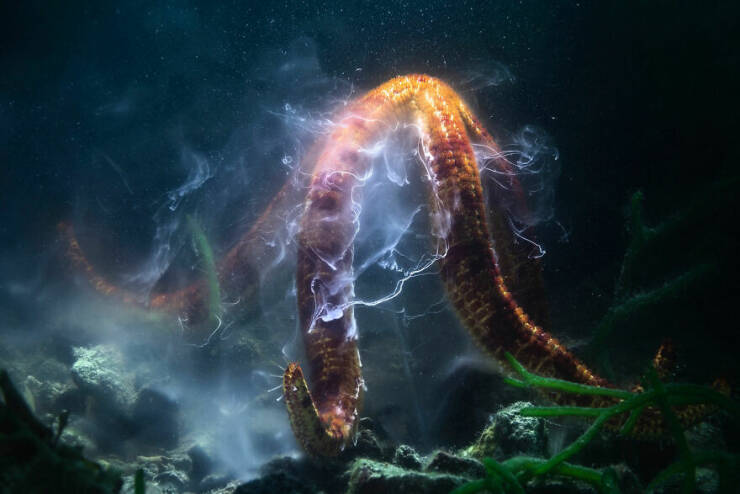 "An illuminating look at how sea stars reproduce—and it’s not by conjuring lightning! Sea stars spawn; releasing eggs and sperm simultaneously from their arms into the water, where fertilization occurs." 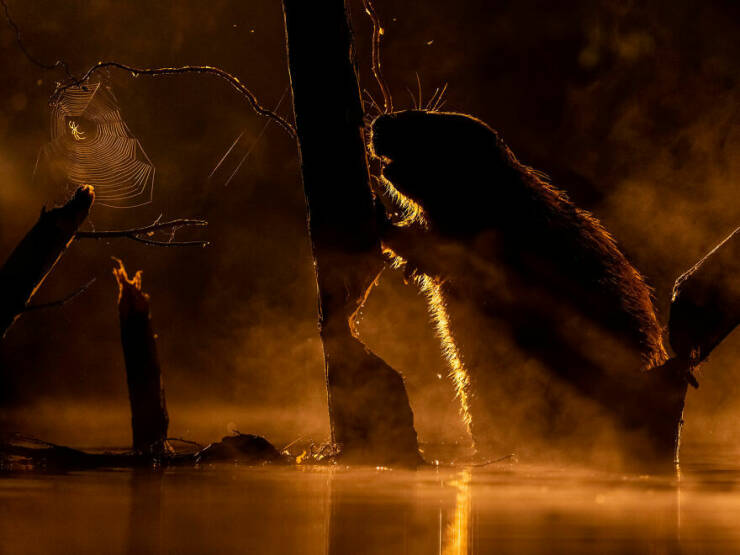 "Once nearing extinction, the European Beaver population now flourishes under new protections, allowing for renewed photography opportunities. However, this beaver’s presence is not the only moment that makes this shot special—a spider in its web clings to the nearly-gnawed-through tree, making for a spectacular, if short-lived, scene." 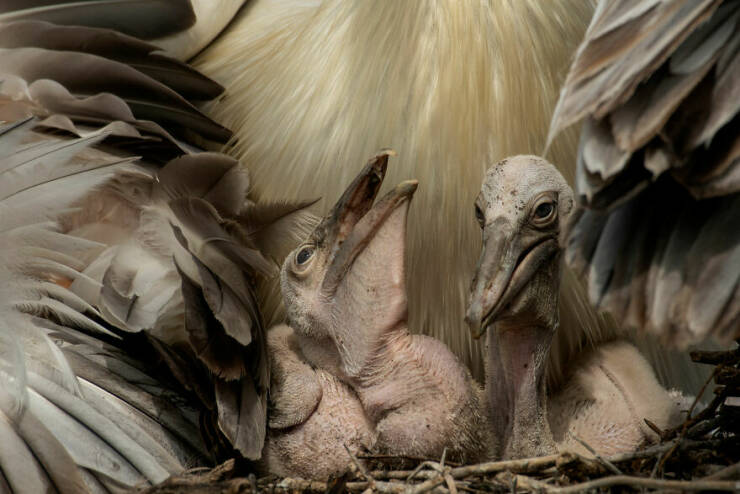 "In early November, this photographer went through a challenging process—from a distance, and on a moving boat— to capture images of these prehistoric-looking spot-billed pelican chicks. Her efforts paid off, as she’d hoped to produce a photo that evokes emotions of nurturing and safety." 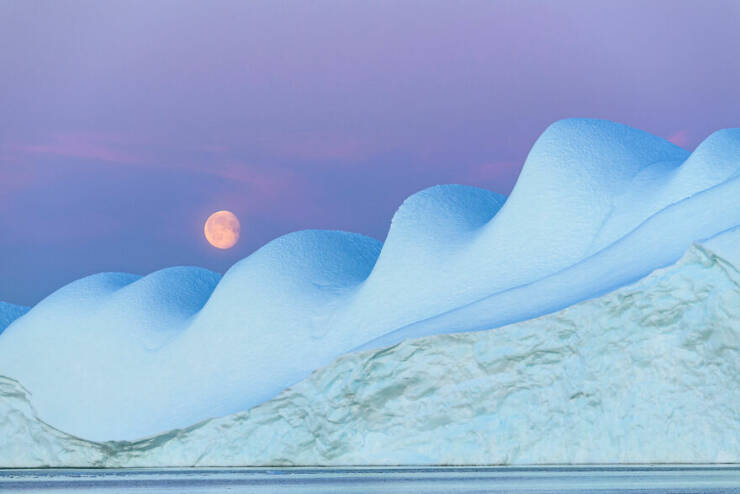 "A fluffy iceberg set against a gorgeous purple sky, illuminated by a red-hued moon. The photographer hoped to show the soft (serve) side to icebergs, which are often presented as imposing, even threatening subjects. Nature has never looked more delicious!"

Art Of Nature Finalist - "Gold From The Bay" By Steve Mandel 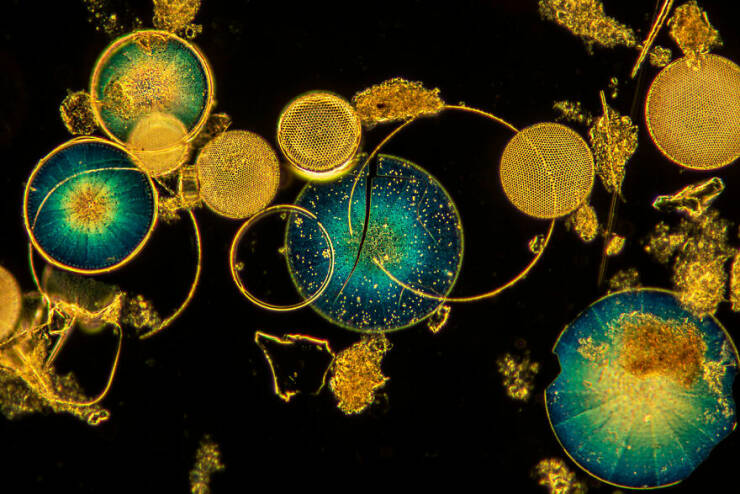 "Should you find these under your microscope, you’ve discovered something as valuable as gold– these diatoms absorb CO2 and help produce 20-30% of Earth’s oxygen. Collected from the San Francisco Bay, the photographer notes that these diatom’s colors are the result of the light being routed around the sides of the slide in the microscope, then refracted by the structure of the diatom wall." 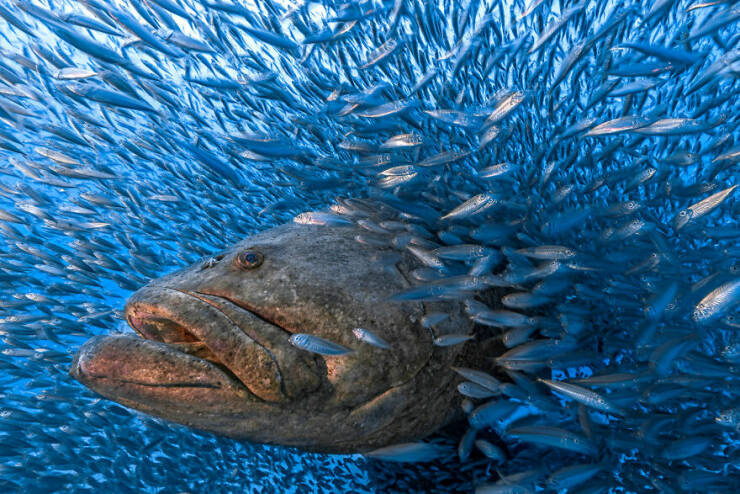 "While capturing this image, the photographer was reminded of a moment in Gulliver’s Travels: When Gulliver arrives at Lilliput and sees how he towers above the inhabitants, he walks carefully so as not to hurt them. However, it is unlikely that this Goliath Grouper—typically the predator in any scenario—will tread lightly. 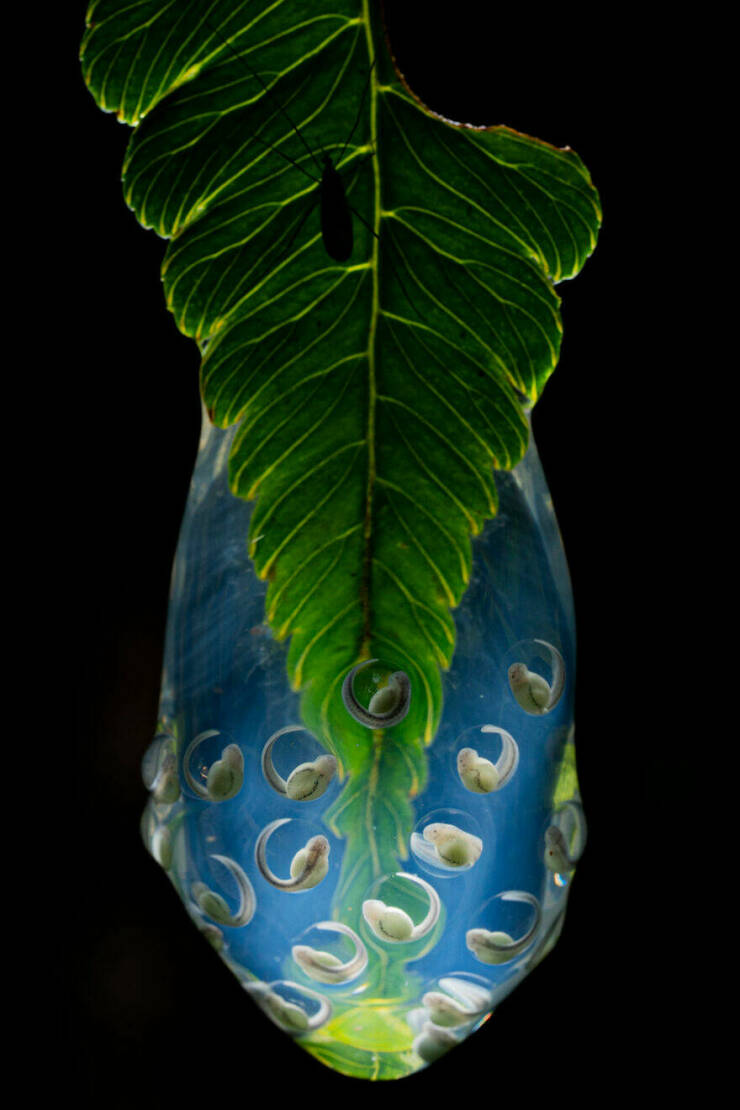 "A gelatinous mass of developing glass frog embryos hangs from a leaf over a stream. Unfortunately, not much is known about nymphargus wiley; in fact, this species is listed as data deficient on the International Union for Conservation of Nature (IUCN) Red List of Threatened Species." "A male Goby Fish protects the female's eggs laid inside a shell alongside a pregnant Long-Snouted Seahorse. It remains unknown whether they are working together to protect their potential offspring." 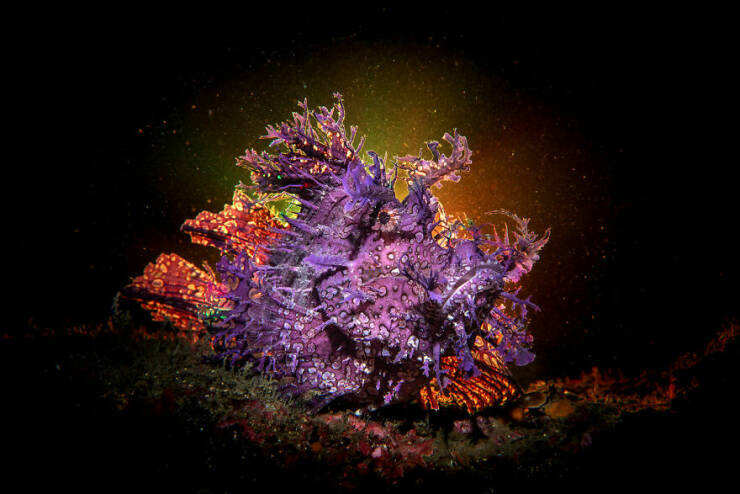 "Nocturnal hunting sensibilities and the ability to camouflage make sightings of the brilliantly colorful Weedy Scorpionfish ironically rare. This stealthy species attracts prey by blending in with their surroundings all while remaining completely still. You might say this makes them the perfect photography subject—but only if you can find them!" "Catching a coral spawning is tricky business! Occurring only once a year and determined by the lunar cycle, this spectacular event can last anywhere from a few hours to a few weeks depending on the coral’s species and location. This photographer spent years attempting to get the timing just right during free-diving efforts, finally snapping an image of this magical underwater snowstorm— during a June dive." 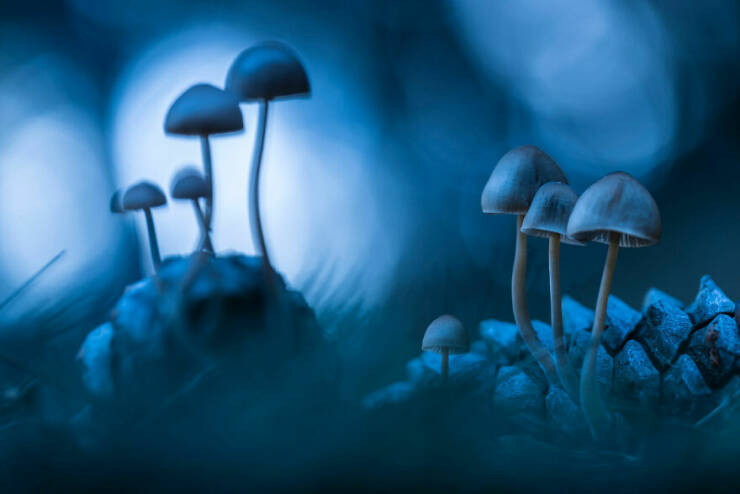 Art Of Nature Finalist - "The Last Frontier" By Florian Ledoux 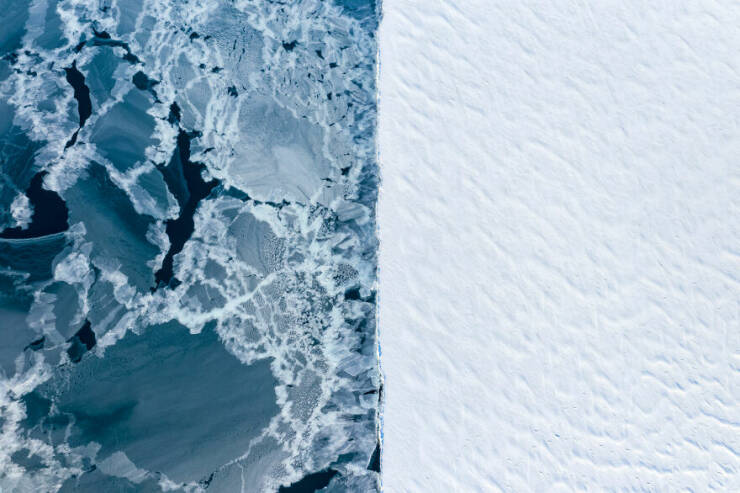 "The dichotomy of sea ice scene, taken from above. On the right side is fast ice, where both man and polar bear can roam, to the left, a beautiful, yet precarious pattern of refreezing ice and drift." 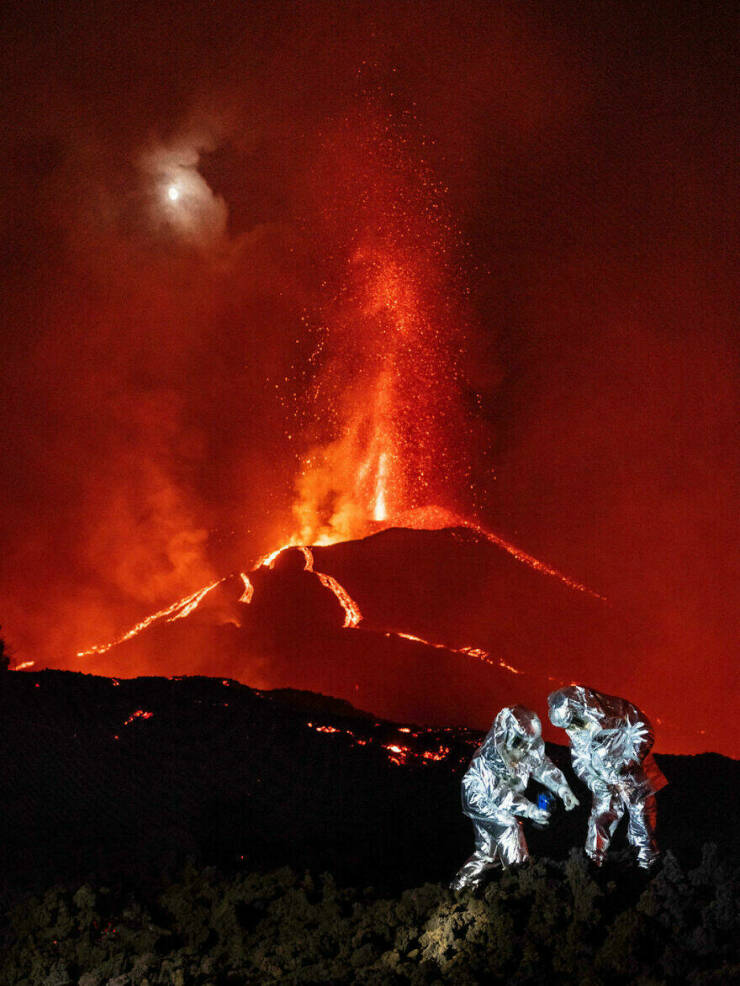 "After chasing the opportunity for nearly two weeks, this photographer was able to accompany intrepid volcanologist Raul Pérez to collect liquid lava samples and measure temperature close to the volcano vent. Though its destruction potential is debated, the Cumbre Vieja Volcano is hypothesized to have the potential to create a megatsunami that could reach as far as North America, making any further discoveries about its volatility extremely important." 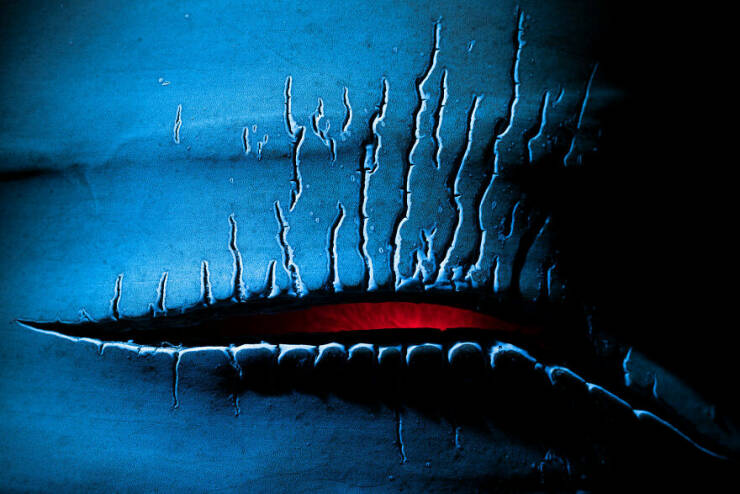 "Agave leaves tend to become extremely heavy, sometimes even bending and producing a ‘wound’ that creates unusual textures when it dries. This photographer noticed this particular agave leaf and saw a superhero in the making, taking advantage of the curvature of the leaf, and lighting the scene with his flashlight to produce a single, watchful eye." 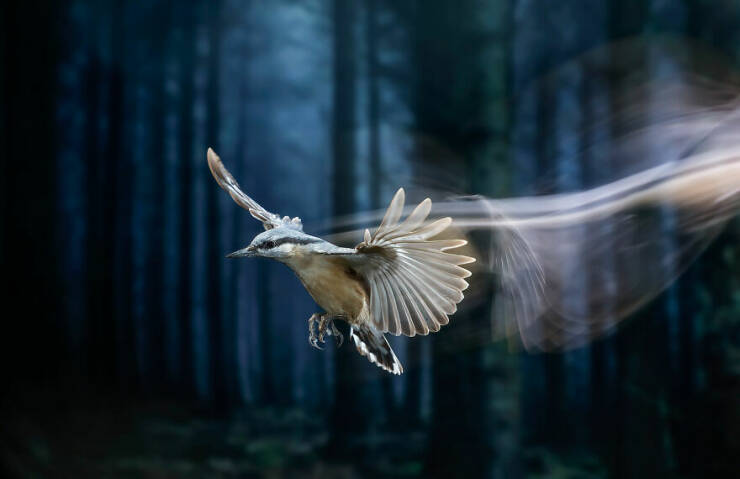 "Though a common species in Spain, the Eurasian nuthatch or wood nuthatch (Sitta europaea) is agile and hard to photograph as it spends most of its life in the trees—thus earning the title ‘the forest elf’." 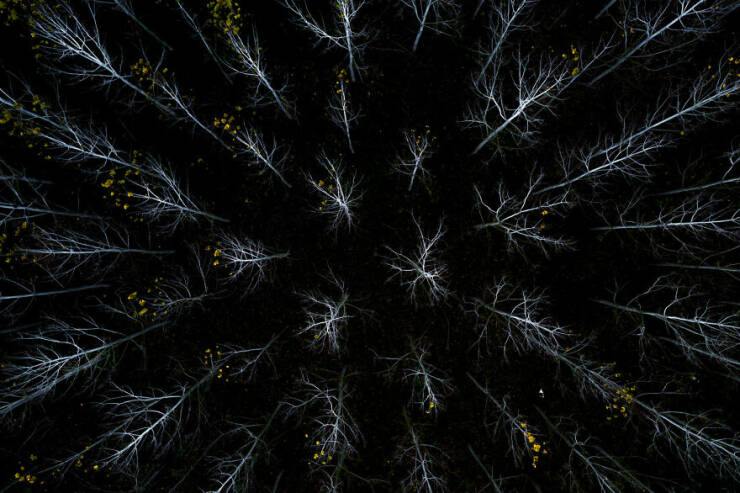 "Spindly, spectral arms reach out as a drone flies overhead—is this a snow-coated black poplar forest or a ghostly retreat?" 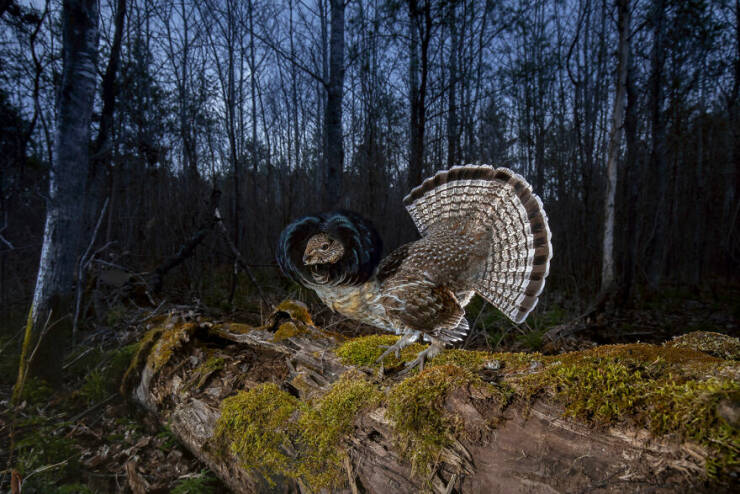 "Perched on a log used to attract mates, this ruffed grouse is displaying for a female just out of frame. The photographer notes that normally the male would be drumming (beating his wings on his chest), but due to the camera trap delay, he instead captured a fanning display—something he’d never seen on a drumming log before." 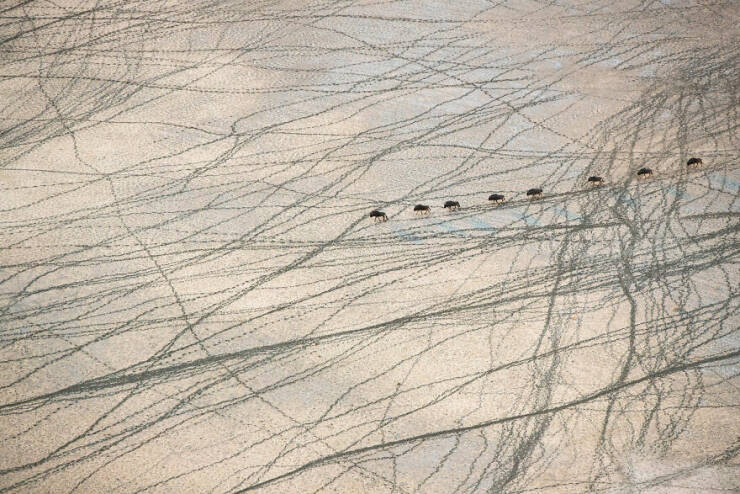 "Historically, Botswana's huge expanse of Makgadikgadi Salt Pans sees very little wildlife outside of the rainy season. In 2021, a combination of unusually heavy early rain and an increase in artificial waterholes enticed these wildebeests to embark on their annual migration much earlier than normal. Between the vastness of the salt pans and the network of gamepaths, this herd only appears to be on a road to nowhere. " "When this caterpillar goes through metamorphosis, it will emerge as the gorgeous Papilio Machaon—named for a Greecian mythological figure from the Trojan War. For now, it will crawl among the fennels, occasionally munching on them for lunch." 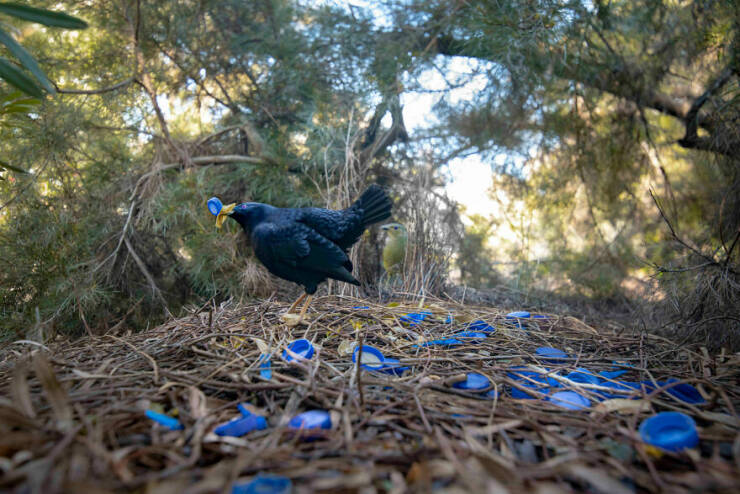 "A male Bowerbird strikes a pose for a female in the background, surrounded by bright blue bottle caps. It’s all part of an elaborate mating ritual wherein these birds build bowers: two-structure columns made out of sticks and colorful objects. The males then take one or two of the objects in their mouth while dramatically displaying their feathers to the female."