Father and daughter in Kamdesh, Nuristan Province, Afghanistan. The expressions on their faces reflects sorrow from the results of deadly clashes. Nuristan is one of the most volatile provinces in Afghanistan, and is cut off by mountainous terrain. It has long been a haven for foreign militants, and has seen some of the bloodiest fighting in Afghanistan’s many conflicts. 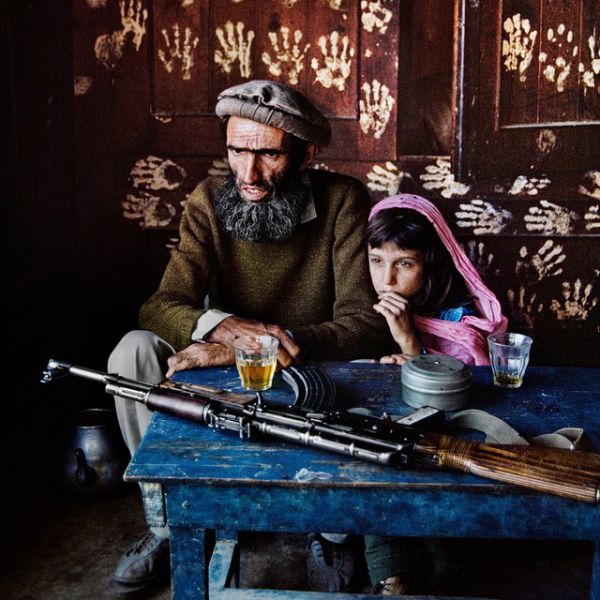 Man and dog in close partnership herding Merino sheep outside of Sydney, Australia. Some of the world’s very best and most exclusive sheep wool is said to come from these farms near Sydney and in Tasmania 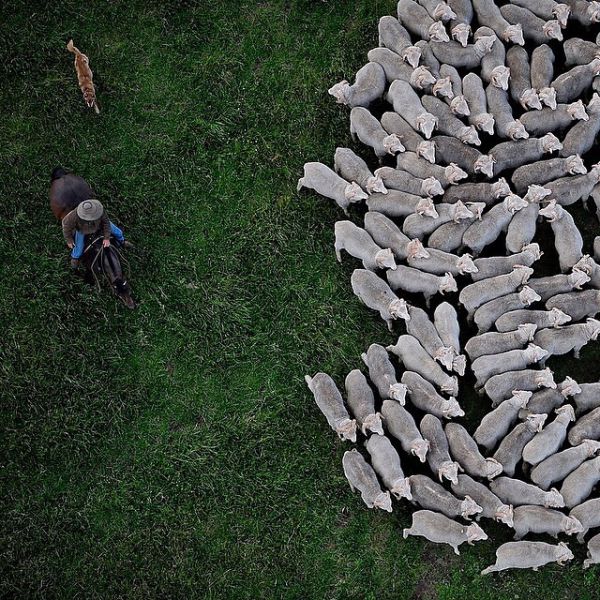 A young man peers through a window at a police checkpoint in Kano, Nigeria on March 31, 2013. The Nigerian Mobile Police, known as Mopols, man a checkpoint to protect the Christian minority during Easter Sunday from rampant violence by Boko Haram 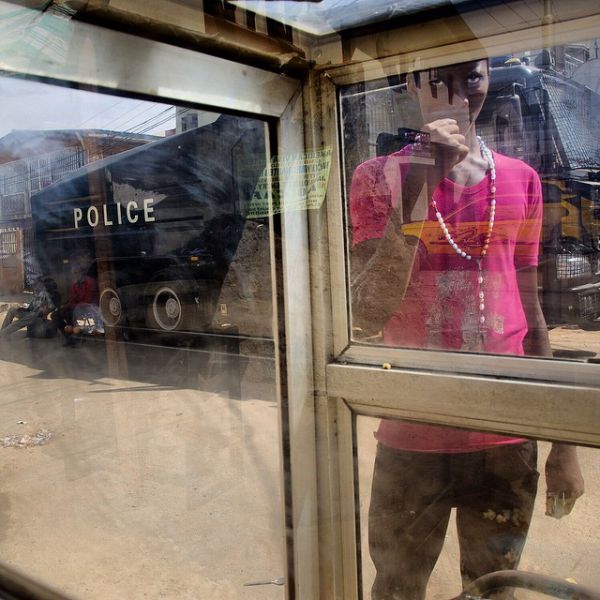 This morning, I woke up thinking of those places where life is harsh but beautiful. The heart of the Wakhan corridor in Afghanistan. Outside, the men are out rounding up the animals. The mountain spirits are cold and quiet in winter. Inside, tea is prepared and there is a moment. 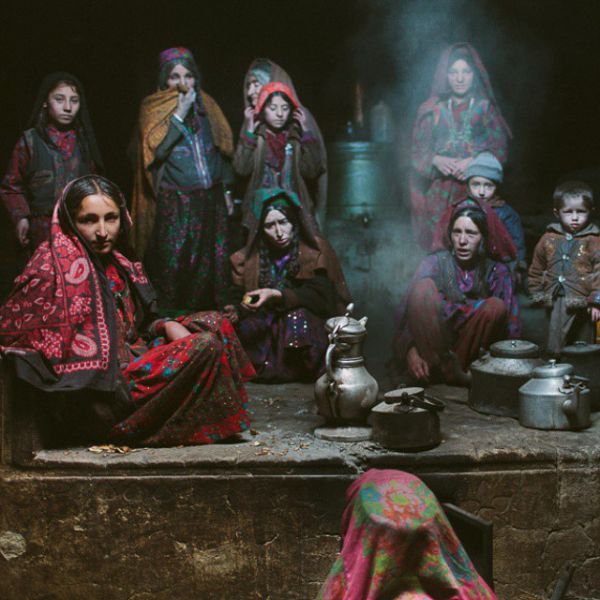 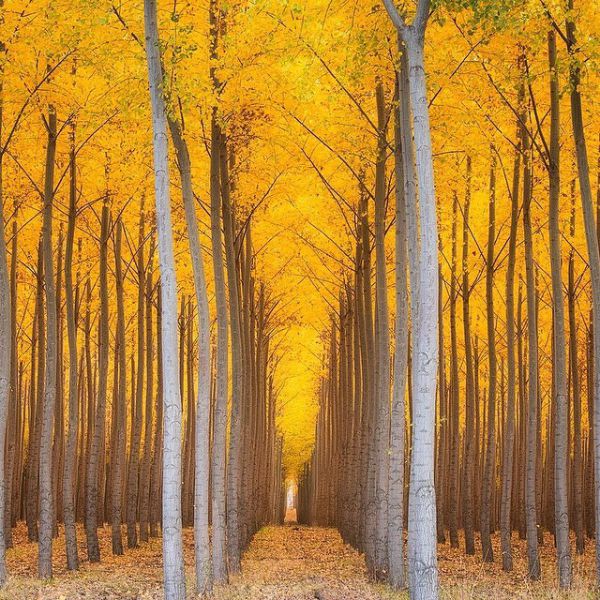 Guineans pile into shared taxis in the capital city of Conakry. Despite the Ebola crisis, it seems that many Guineans do not abide by the recommendations on the avoidance of body contact. At practical level, however, few transportation options exist outside tightly packed shared taxis. Unlike in SierraLeone, many people here still shake hands. 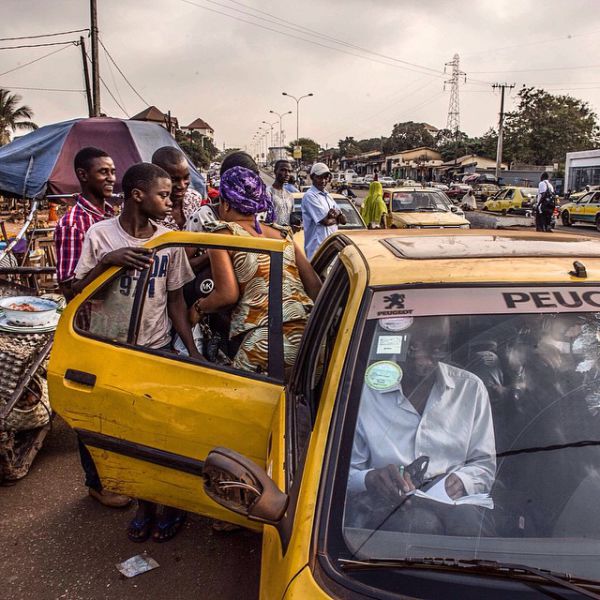 The delicate process of a difficult rock climbing first ascent is a long and thoughtful one. It’s learning how to move your body, adjust for the smallest nuance, fail, be patient and fight to make the otherwise impossible doable. @sashadigiulian knows this process all too well, having put up first ascents all over the world. Seen here in waterfall Boven South Africa doing that very thing on a nearly blank and beautiful wall. 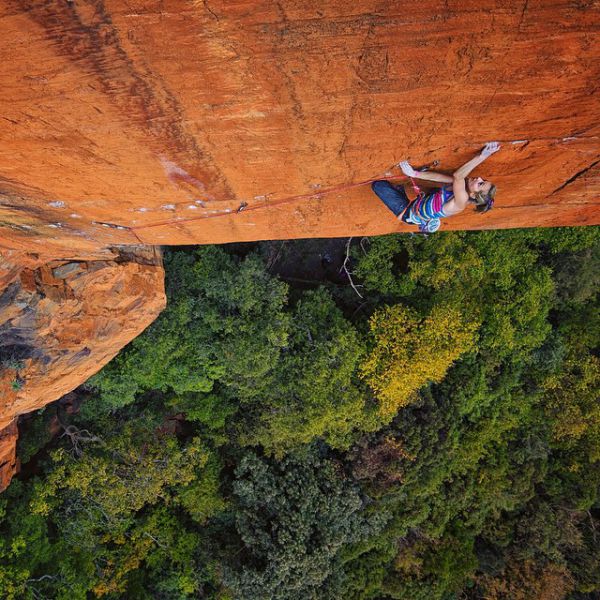 The Holi festival, celebrated by Hindus, is also known as the festival of colors and it’s easy to see why. With powder exploding around him, this man is in a state of reverie as he is carried through the crowd. In recent years, the festival has started to spread to parts of Europe and North America to signify the end of winter and a time for new beginnings. 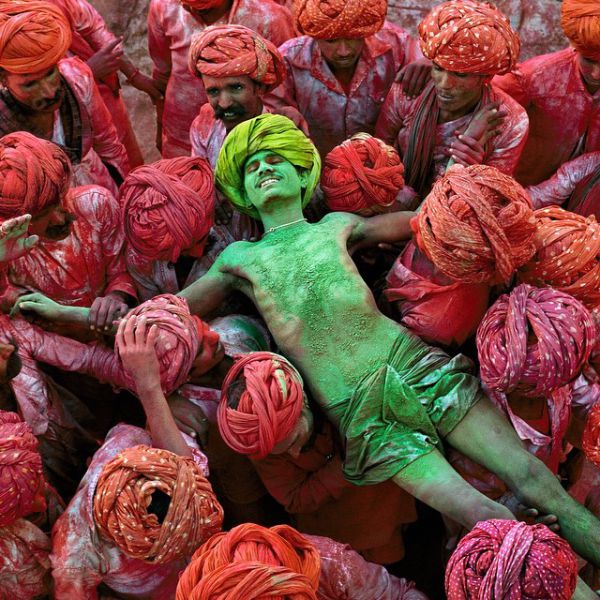 @marcusbleasdale People displaced by the fighting between Seleka and anti-balaka forces take shelter in an old factory on the grounds of the Catholic church in Bossangoa.This image was used in the 2013 Human Rights Watch report They Came To Kill: Escalating Atrocities in the Central African Republic. Human Rights Watch’s research on Central African Republic helped propel deployment of peacekeepers by the UN Security Council in September 2014. 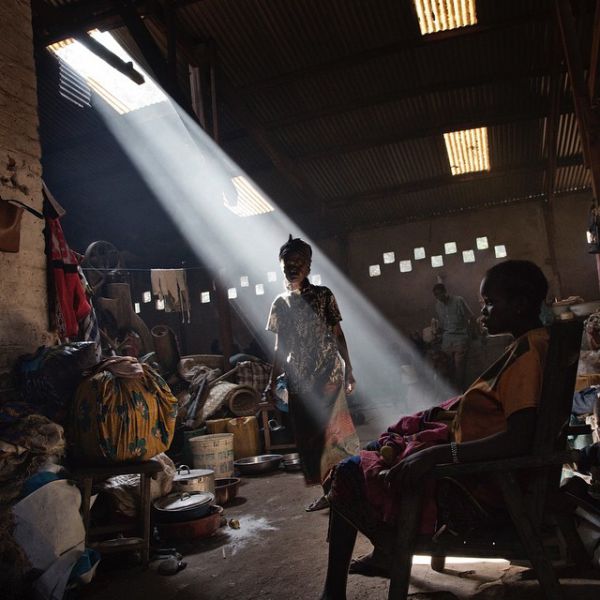 A lions mane jellyfish hunts in the cold rich waters of Newfoundland Bonne Bay. Lions Manes are the largest species of jellyfish and prefers cold waters. 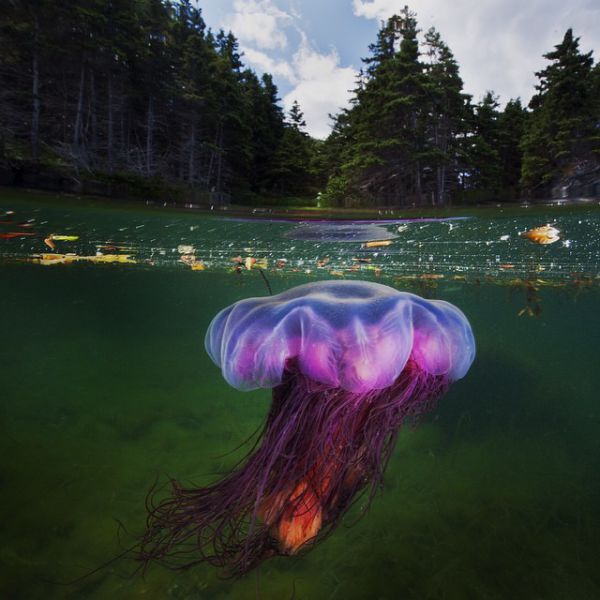 A Himba woman draws water for her goats in Northern Namibia. 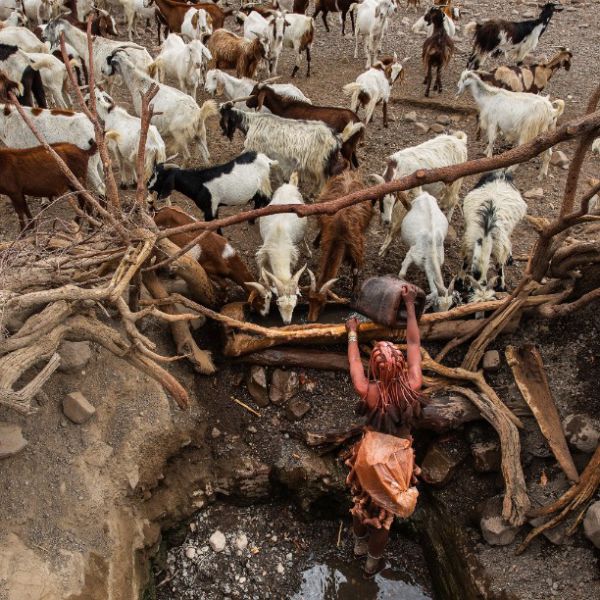 The Daily Commute: Climbers Tommy Caldwell @tommycaldwell and Kevin Jorgeson @kjorgeson rely on a network of rigged ropes to move up and down the  Dawn Wall of El Capitan in order to access the hardest pitches. They leave their portaledge camp each afternoon as the sun dips around the corner, and use mechanical ascenders to climb the ropes and go to work on the day’s climbing adventure 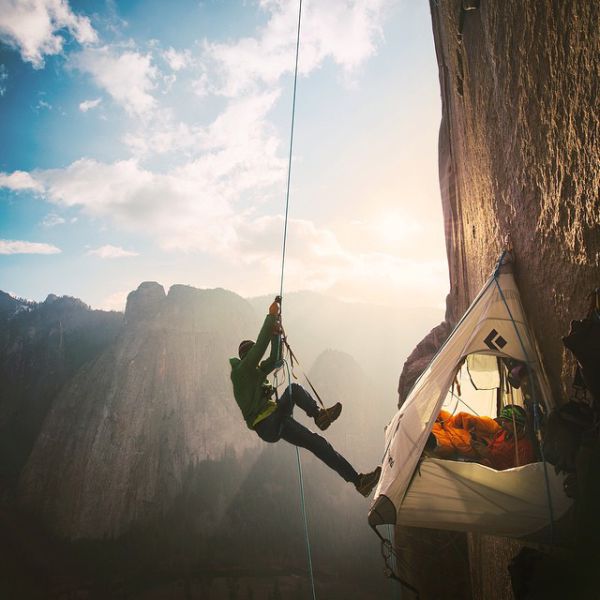 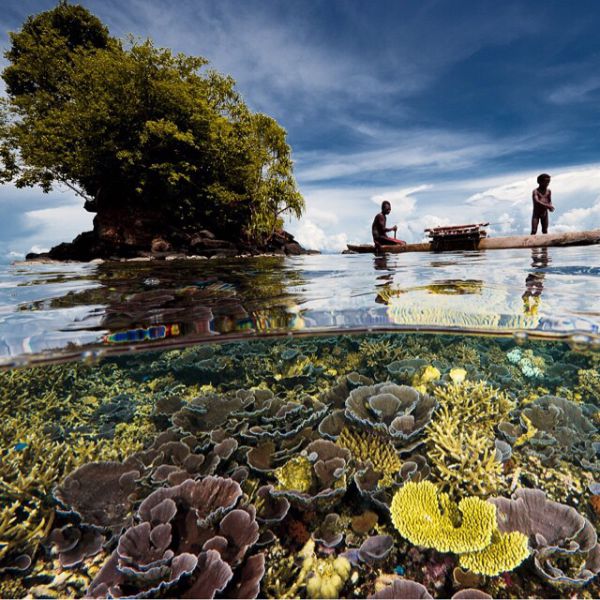 Photo by Michael Yamashita @yamashitaphoto. A sea of monks at Labrang Monastery in Gansu, China 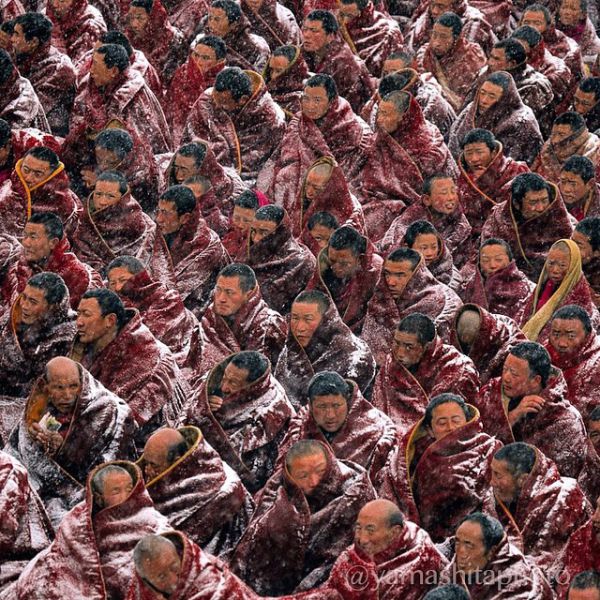 Mingma Sherpa walks by one of many monuments to climbers who died in the Himalayas. The spot is on the hike to Everest Base Camp. 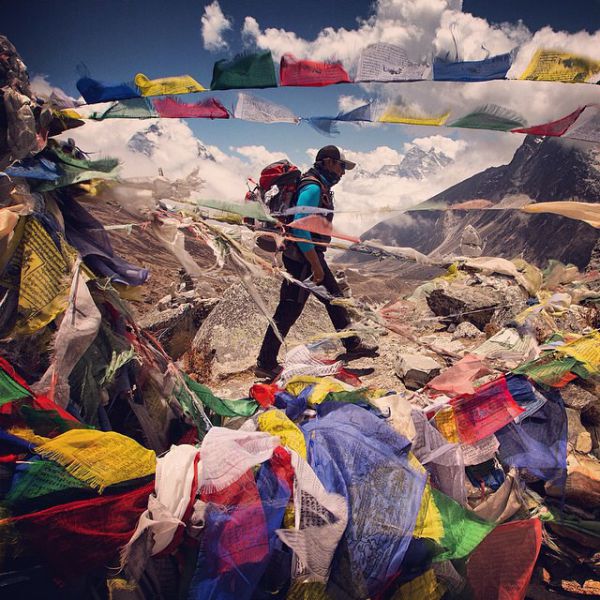 Rwandans congregate inside the Sainte-Famille catholic church in Kigali for Sunday mass this morning. During the Rwandan genocide of 1994 thousands took refuge in the church but very few survived the massacre. Witnesses said that the priest in charge of the church armed himself and helped Hutu militias take people away to be murdered. 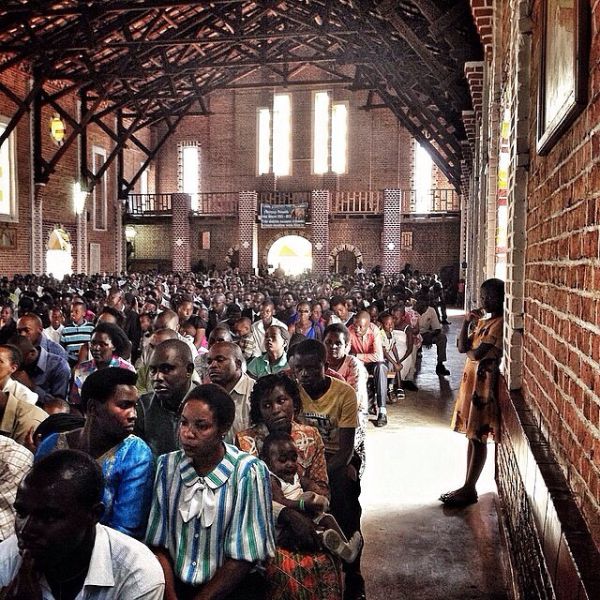 Women stand overlooking the neighborhood of Kroo Bay in  Freetown, SierraLeone. Kroo Bay is an historic settlement and one of the most densely populated residential areas of the city. Photo by @petekmuller 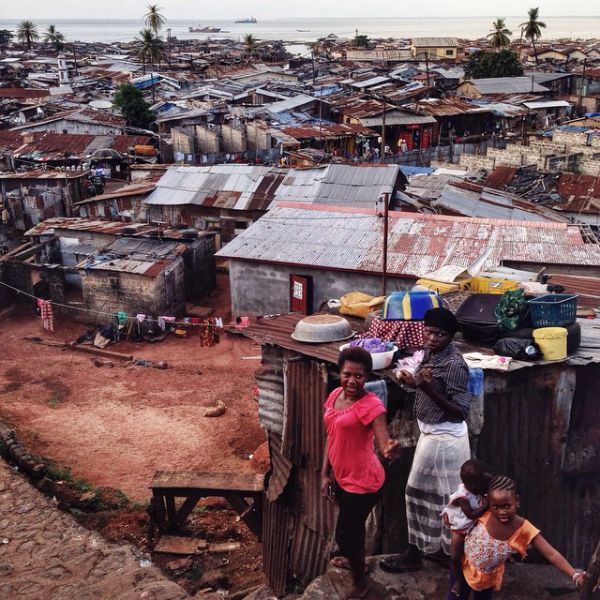 Sadhus or Hindu holy men at Pashupatinath Temple in Kathmandu, Nepal’s most sacred Hindu shrine and one of the great Shiva sites. It is located on the banks of the Bagmati River 5 kilometres north-east of the Kathmandu Valley. The temple is the seat of the national deity, Lord Pashupatinath. 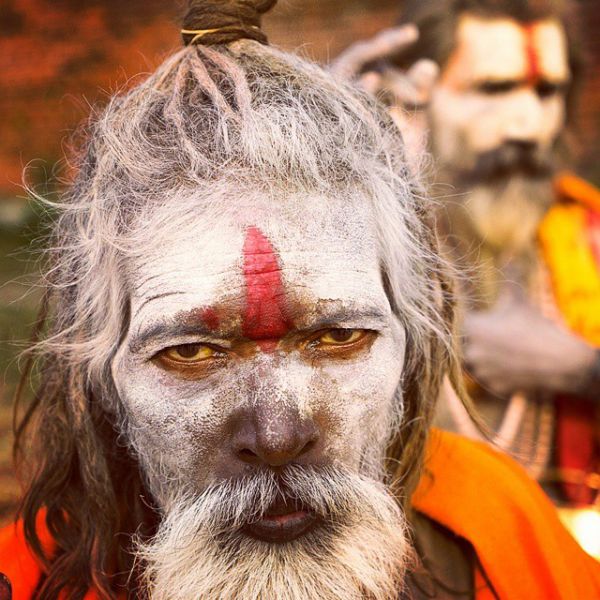 Monks rely on the generosity of others to provide them with their daily meals as they aren’t allowed to cook for themselves or store food overnight. @SteveWinterPhoto 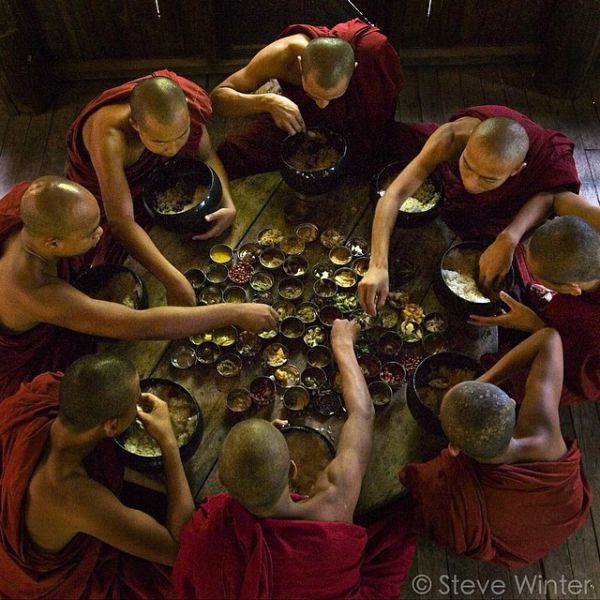 There’s something special about waking up at 20,000ft with 3000ft of air under your sleeping bag. 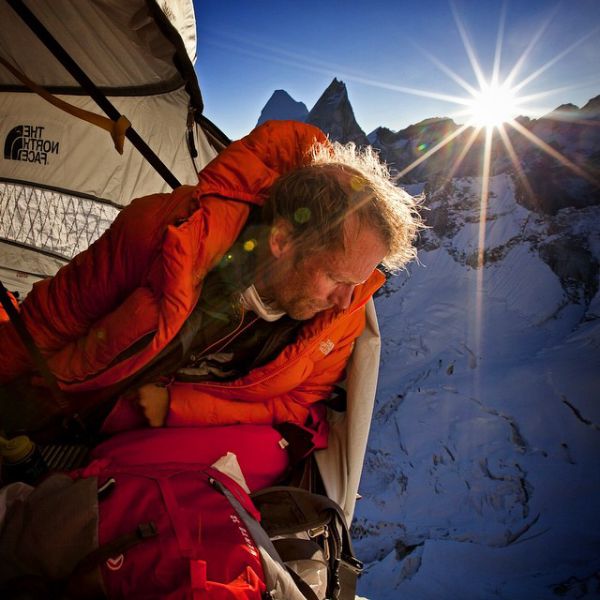 Yahyah Baig and his niece are back home after a whole day’s walk to a high altitude lake. In a remote village of the Karakoram mountains in  Pakistan, they singe the small feathers of a duckbefore cooking it. 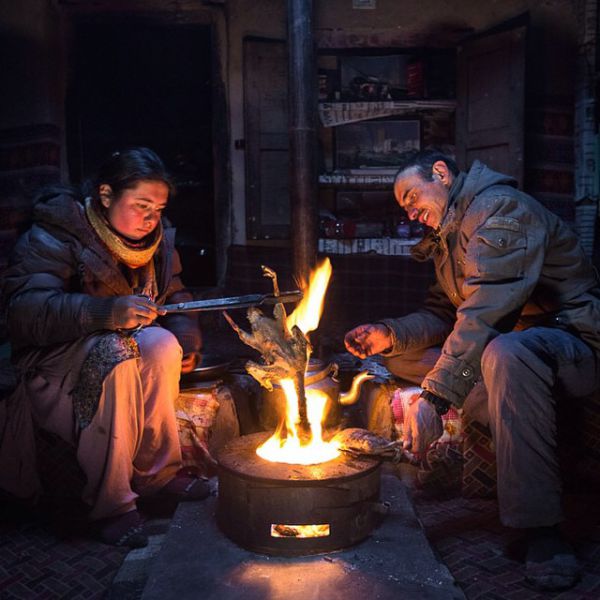 Exotic pets can have a rough life. Born in captivity, there is no wild for them to return to. So where do they go when things don’t work out ? Many owners with the best intentions find themselves unable to care for an animal that eats several hundred pounds of meat per week or can kill you with one blow. There are many shelters that care for dogs and cats who have been given up by their well-meaning owners, but exotic pets have limited options. Most zoos can’t take them and space at sanctuaries is scarce. Mike Stapleton has 5 tigers that he cares for at his Ohio home. He calls it Paws & Claws Animal Sanctuary and all of his animals were unwanted. To comply with new regulations in the state, he is building a much large enclosure than seen in this photograph 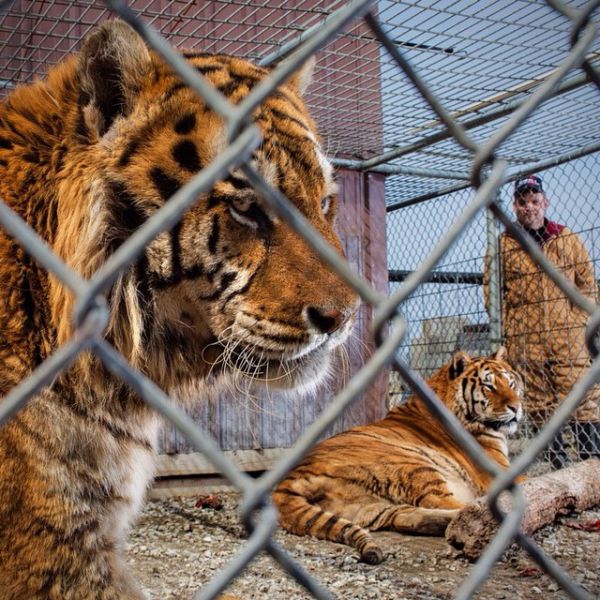 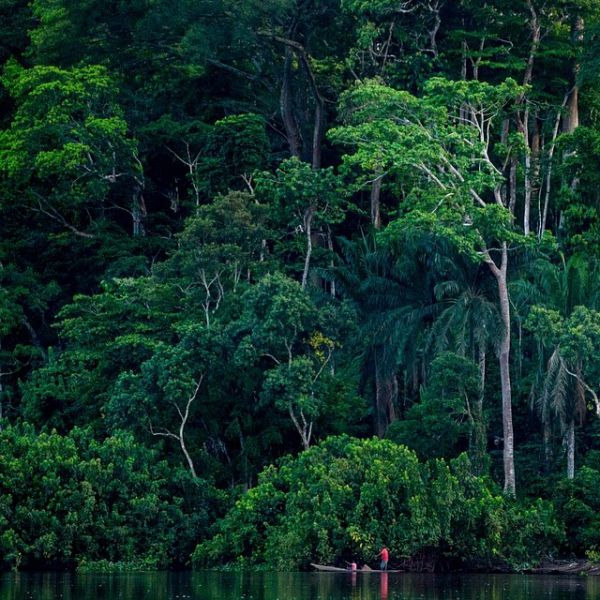 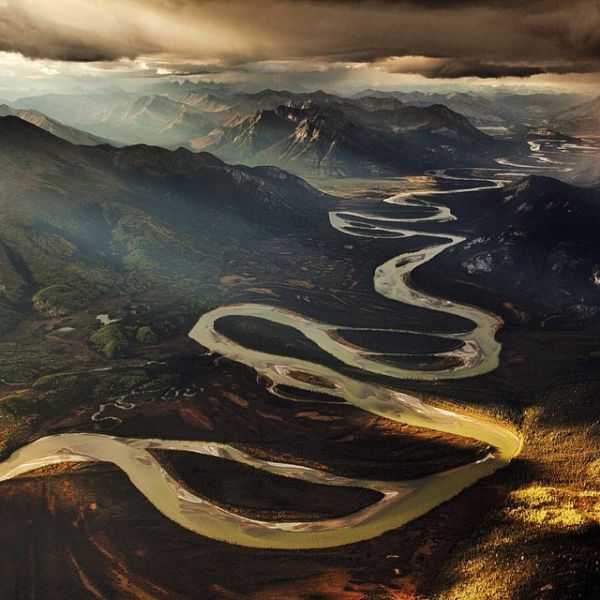 Pakistani soldiers make tea in the darkness of a fiberglass igloo high in the himalaya on the border of India. The igloos house up to five soldiers at a time for three month tours of duty on the worlds highest and most inhospitable battle ground. Unlike other conflict zones, the disputed border of India and Pakistan sees relatively little open fire. More casualties occur from environmental hazards such as exposure and avalanches. 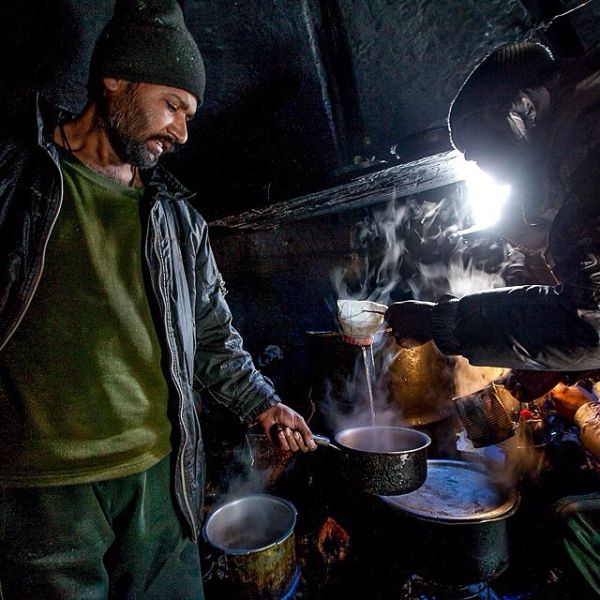 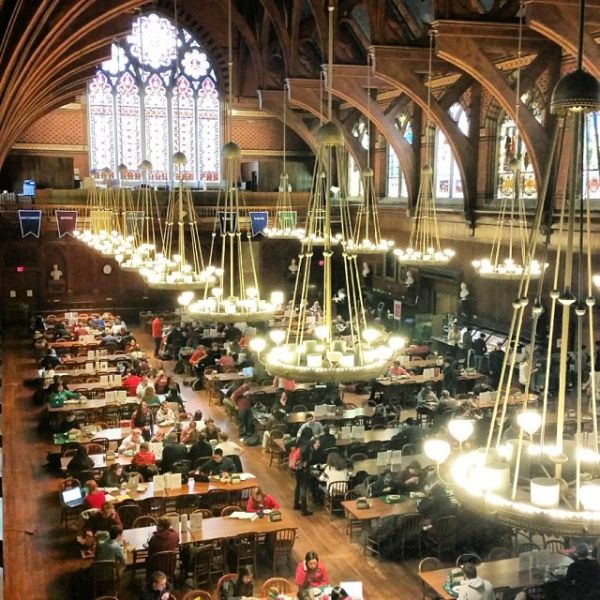 A costumed care taker working in a giant-panda enclosure while an inhabitant peers in. 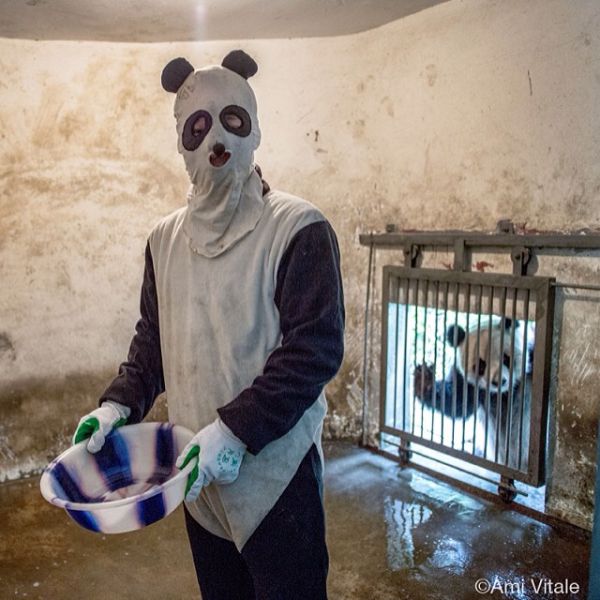 A Navy Seal Multi Purpose Canine is treated for wounds by the U.S. Army 438th Medical Detachment Veterinary Team on Kandahar Airfield, Afghanistan. The Belgian Malinois named Falco sustained wounds in a fight with an Afghan dog on a mission in a remote part of Kandahar and was evacuated by helicopter to the veterinary team. 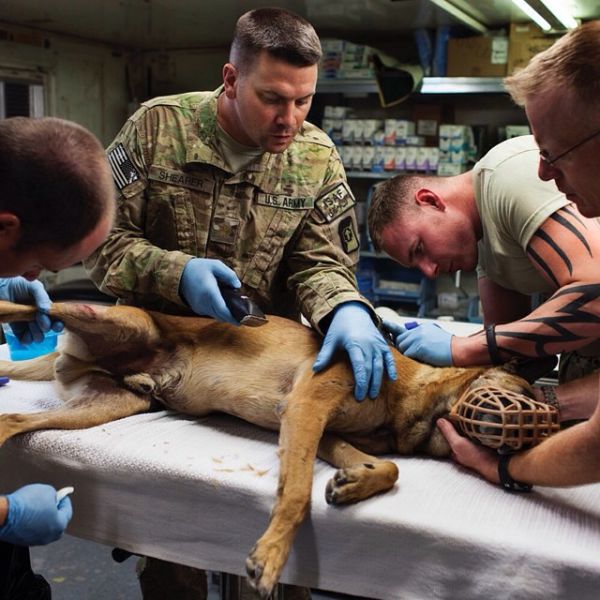 Kamara, a rhino keeper introduces Samburu warriors to baby rhinos. None of the warriors had ever seen a rhino in the their life and some had never even seen a photo of a rhino. Their eyes got wide and they became very protective of them. The young warriors from Northern Rangelands Trust community conservancies have been visiting to learn about conservation practices such as sustainable land use, grazing programs and endangered species conservation 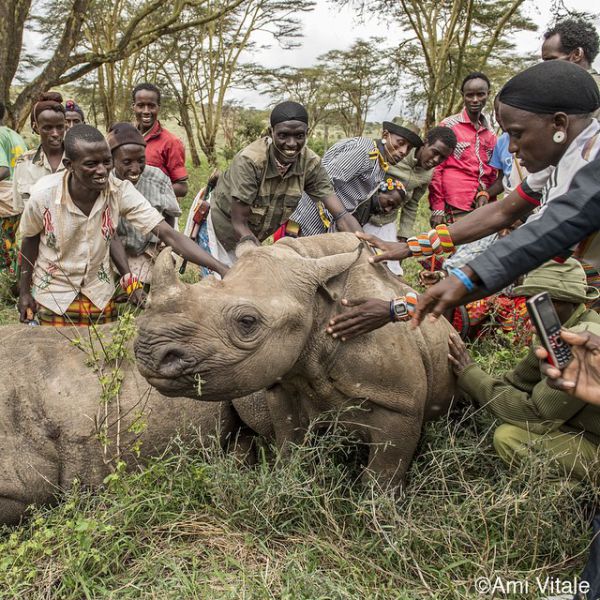