Carmen Basilio (right) celebrates with his cornermen after knocking out Tony DeMarco (left) in the 12th round for the world welterweight title, Nov. 30, 1955 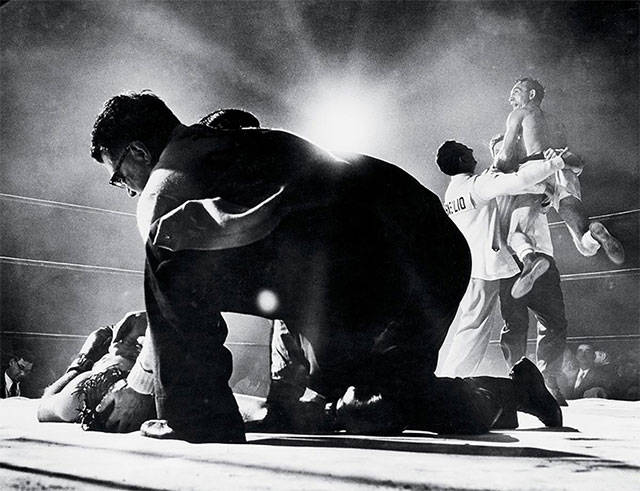 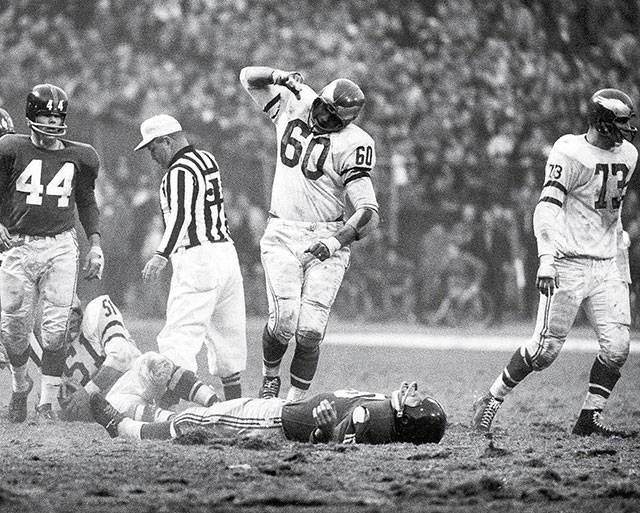 Montreal Summer Olympics, Aug. 2, 1976 | Nadia Comaneci of Romania completes a somersault during the 1976 Summer Olympics in Montreal. Comaneci was the first gymnast to ever be awarded a perfect score in an Olympic gymnastic event, and in total, won three gold medals in Montreal. 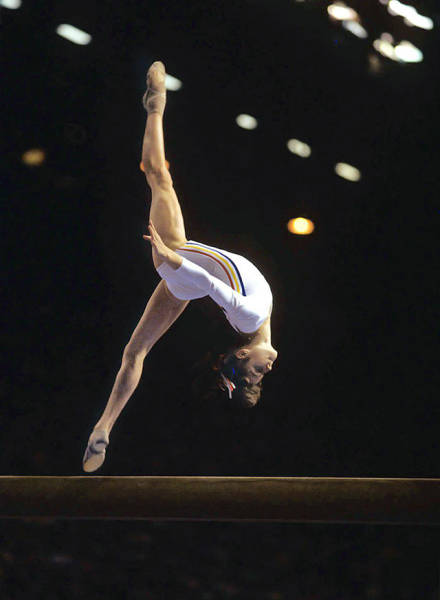 Super Bowl XXIII, Jan. 22, 1989 | San Francisco 49ers quarterback Joe Montana leads his team down the field in the closing minutes against the Cincinnati Bengals in Super Bowl XXIII. With only 3:10 left in the game, Montana marched the 49ers 92 yards down the field to beat the Bengals 20-16. 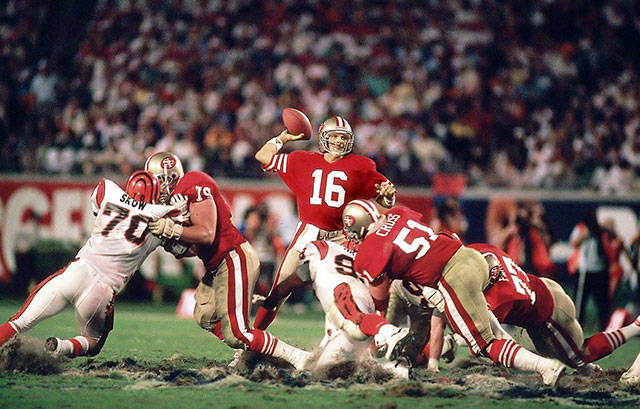 The Green Bay Packers carry head coach Vince Lombardi off the field after their 33-14 victory over the Oakland Raiders. It was the Packers second consecutive Super Bowl victor, Super Bowl II, Jan. 14, 1968 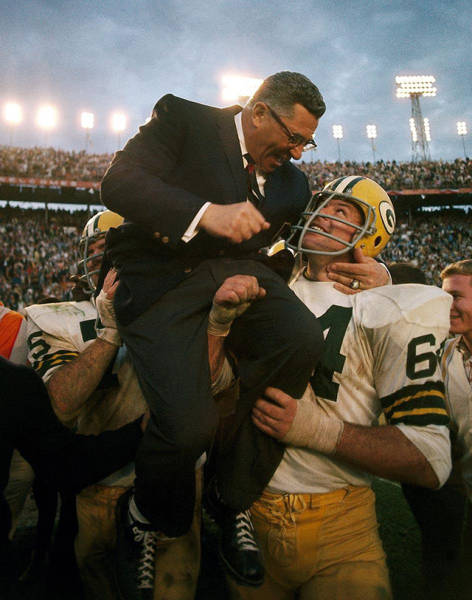 Summer Olympics, Sept. 24, 1988 | Canadian sprinter Ben Johnson pulls ahead of the pack during the men’s 100-meter dash at the 1988 Summer Olympics in Seoul, South Korea. Johnson would win gold and set a new world record, only to be stripped of both when he tested positive for performance-enhancing drugs three days later. 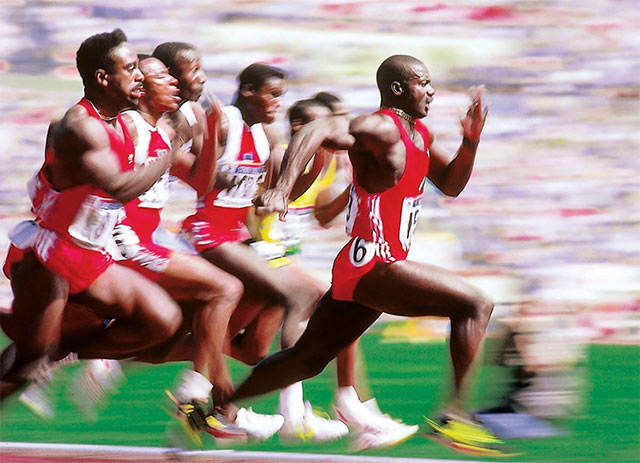 April 5, 1968 | Two giants of the NBA, Bill Russell of the Boston Celtics boxes out Wilt Chamberlain of the 76ers during a game in Philadelphia 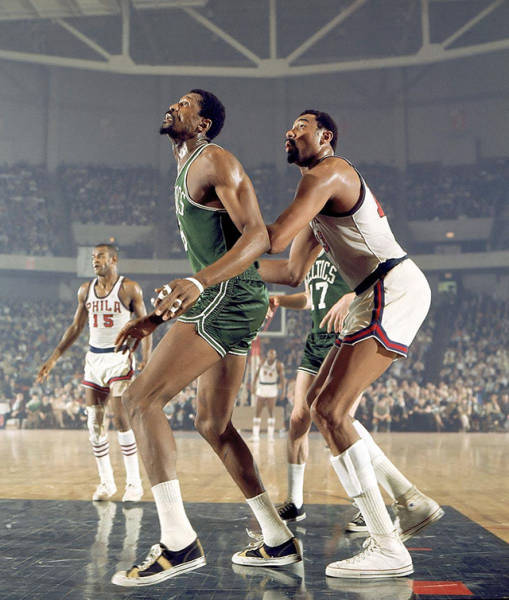 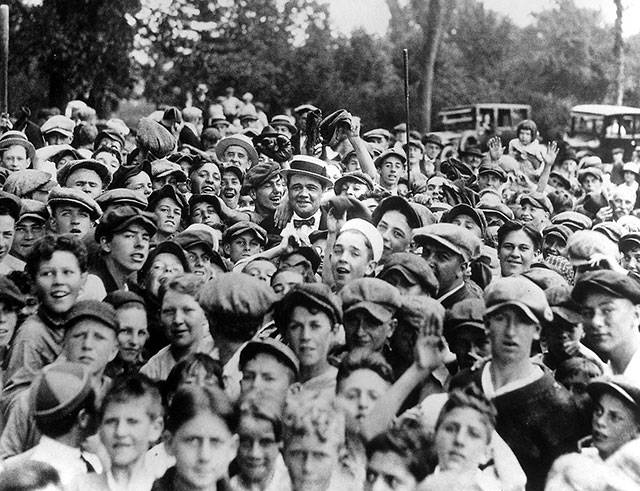 Eastern Conference Finals, April 15, 1965 | Leading 110-109, Boston Celtics guard John Havlicek stole the ball on the inbounds pass from the Philadelphia 76ers to secure the Celtics victory. The Celtics would go on to the NBA Finals, where they would defeat the Lakers in five games. 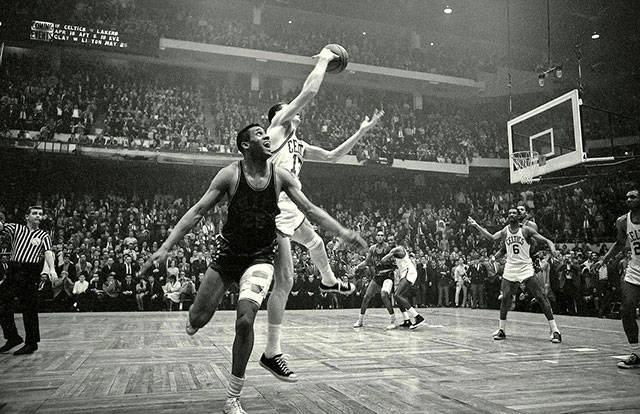 Masters, April 11, 2004 | Phil Mickelson celebrates after making an 18-foot putt on the 18th hole to clinch a one-stroke victory at the Masters. After years of being called the best player without a major victory, Lefty broke through with his nine-under-par performance. He won the tournament again in 2006 and 2010. 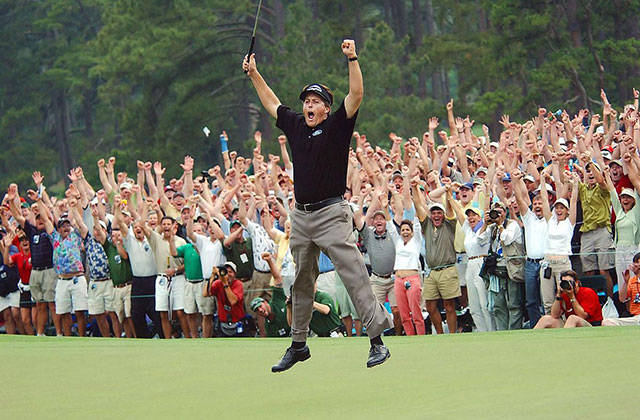 Pistons at Celtics, Nov. 19, 1955 | Boston Celtics point guard Bob Cousy drives by two Fort Wayne Pistons defenders during a game in 1955. Cousy’s unorthodox style, featuring behind-the-back dribbling and no-look passes, stood in marked contrast to the rest of the league, which was then dominated by a more fundamental style of play. 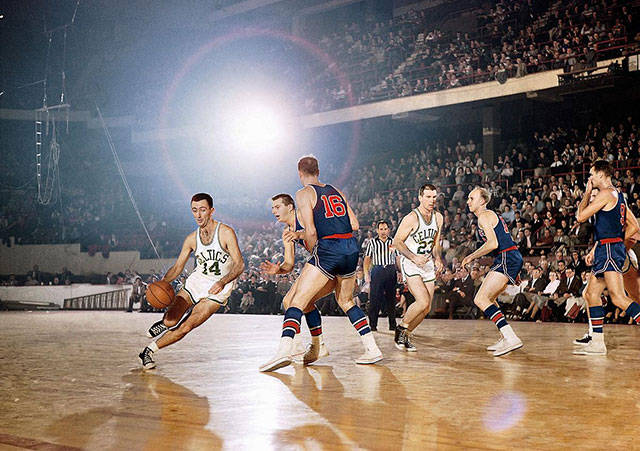 Future NBA Hall of Famers Earvin Johnson and Larry Bird try to figure something out during the 1979 Championship game between Michigan State and Indiana State. 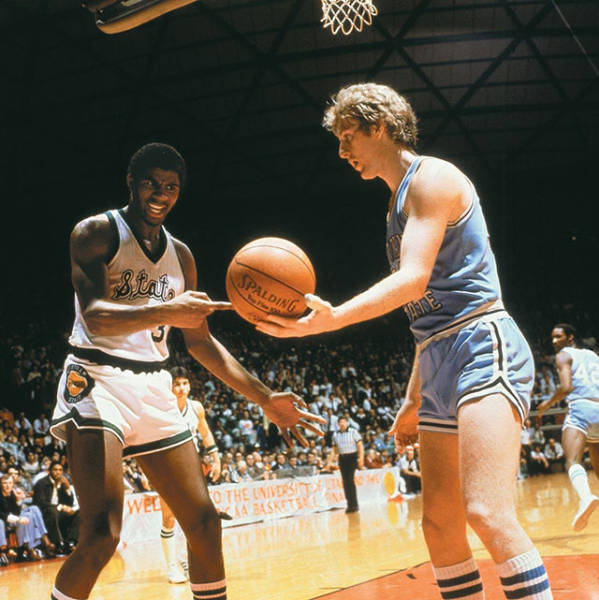 Busch Stadium, Sept. 7, 1998 | Cardinals slugger Mark McGwire hits his 61st home run of the season to tie Roger Maris’ record. McGwire hit the record-breaking 62nd home run the next day, and he finished the season with 70. Barry Bonds later broke the record by hitting 73 homers in 2001. 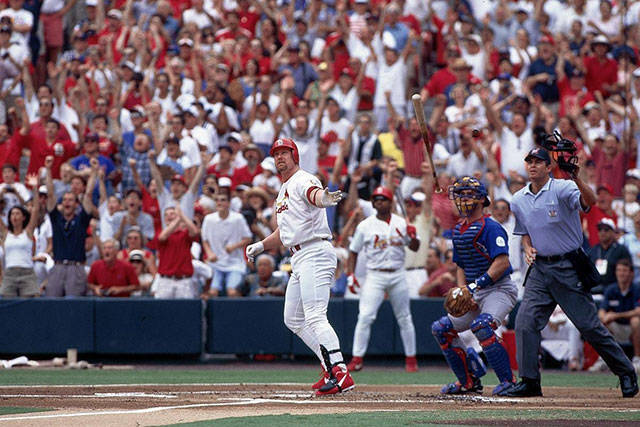 American swimmer Michael Phelps out-touches Serbian swimmer Milorad Cavic by 0.01 seconds at the finish of the 100-meter butterfly final. It was the seventh of Phelps’ record eight golds during the Olympics. 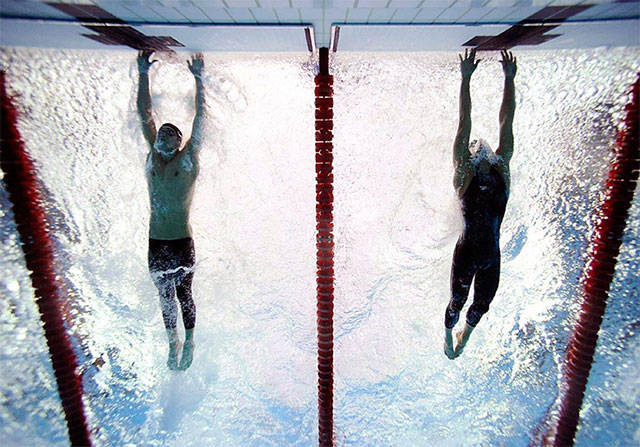 World Series Game 1, Oct. 19, 1991, Atlanta Braves catcher Greg Olson goes head over heels after tagging Minnesota left fielder Dan Gladden out at home during Game 1 of the 1991 World Series. The Twins would win Game 1, 5-2, and go on to win the Series in seven games. 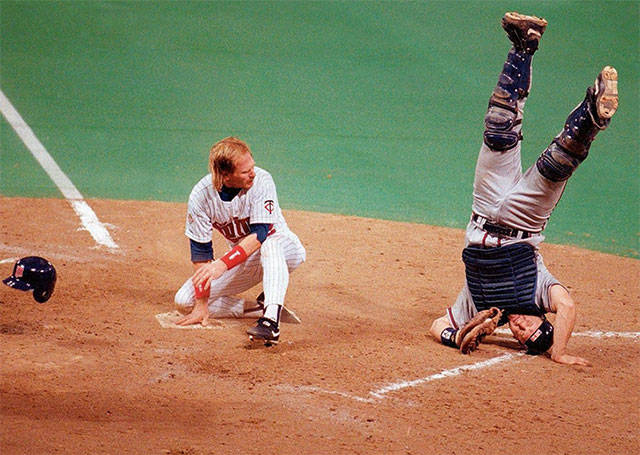 Ali knocks out Cleveland ‘Big Cat’ Williams in three rounds at the Houston Astrodome to defend his heavyweight title in November 1966. The bout drew a record indoor crowd of 35,460. 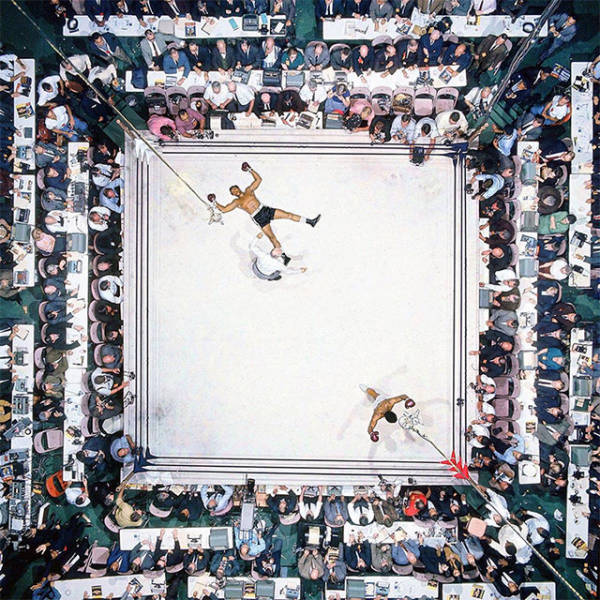 Paralympic Games, Sept. 21, 2004 | Hungary swimmer Ervin Kovacs starts the 200-meter freestyle SM5 at the Paralympic Games. Kovacs took the silver medal in the race, finishing behind only China’s Junquan He. 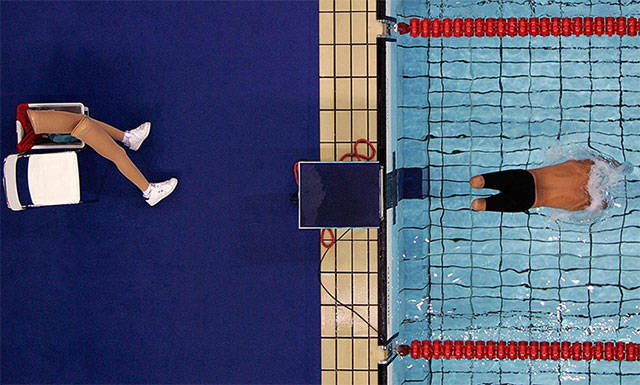 All-Star Weekend, Feb. 6, 1988 | Air Jordan takes off from the free throw line and soars to a perfect score of 50 to defeat Dominique Wilkins in the finals of the Slam Dunk Contest. It was the second straight title for the Bulls star, and the ’88 contest is widely considered the best ever because of the duel between Jordan and Wilkins. 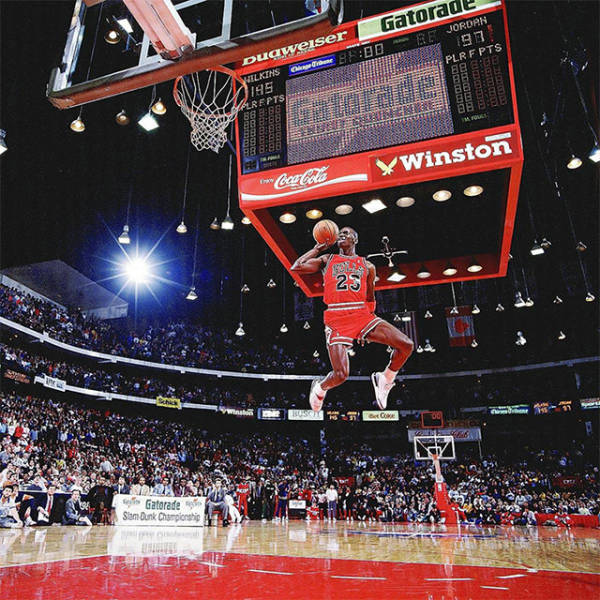 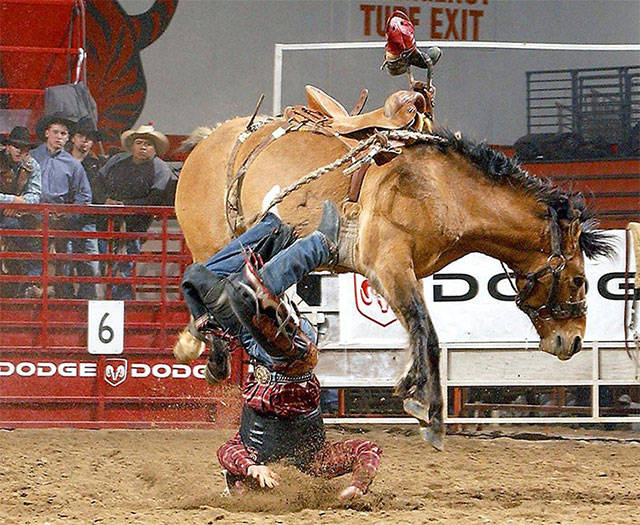 Keeneland Race Course, April 28, 2006 | Jockey Julien Leparoux tries to hold on to the bridle as he is catapulted off Sanibel Storm, which hit the rail during the stretch run. The jockey and horse were both uninjured. 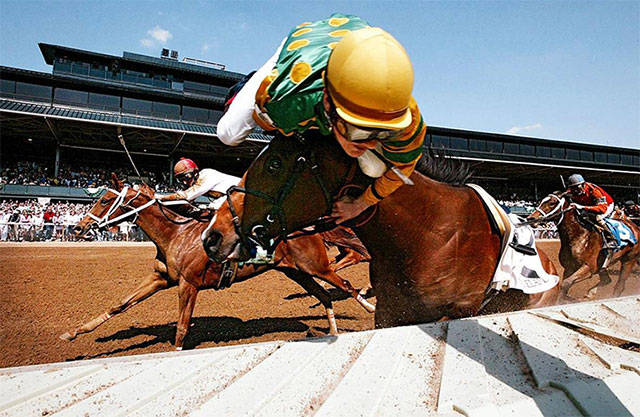 Sierra Leone, April 6, 2006 | The members of the Single Leg Amputee Sports Club of Sierra Leone chase for the ball in Freetown. A brutal civil war left more than 6,000 amputees in Sierra Leone. 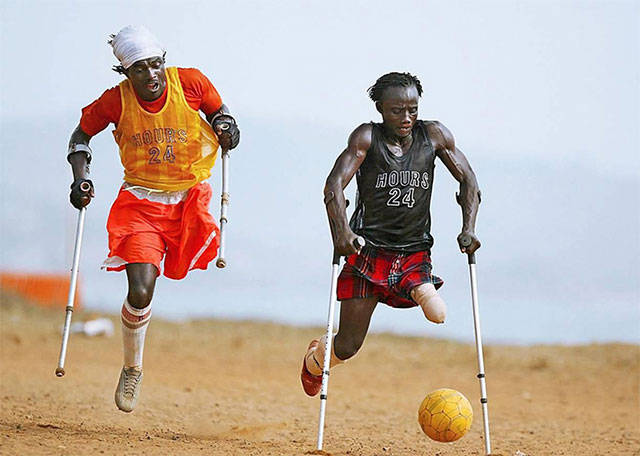 USC vs. UCLA, Dec. 3, 2005 | USC running back Reggie Bush jump over UCLA defender Marcus Cassel and into the end zone for a touchdown. Bush’s spectacular season earned him the 2005 Heisman Trophy, but the award was later stripped because Bush had received illegal benefits during his time with the Trojans. 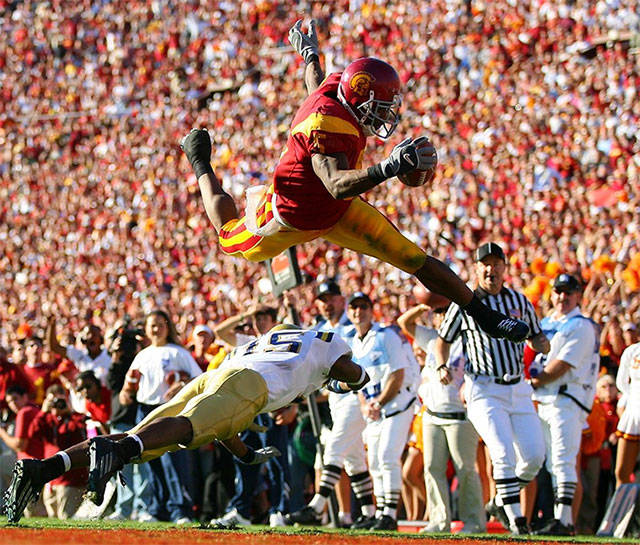 Yankees at Red Sox, June 3, 2007 | Manny Ramirez flies into second base after doubling, losing his helmet in the process. Ramirez went 2-for-4 but Boston lost 6-5. 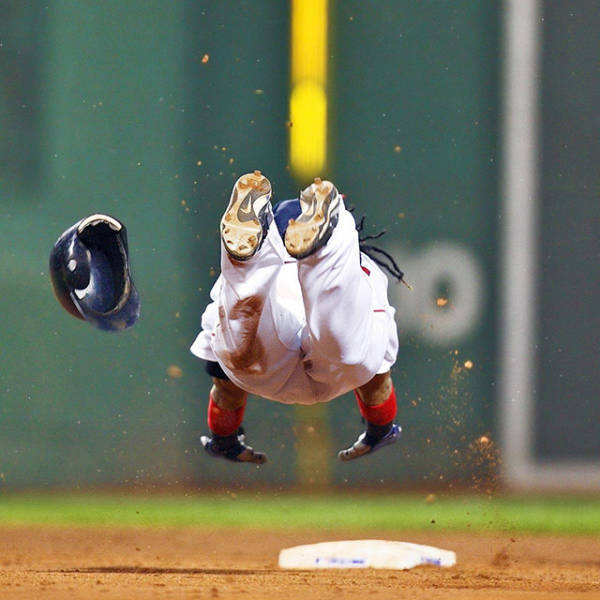 Pittsburgh receiver Antwaan Randle El has his head turned around as Chris Akins (36) of the Cleveland Browns is called for face masking. The Steelers defeated the Browns 36-33 during the AFC Wild Card Playoff game on Jan. 5, 2003, at Heinz Field in Pittsburgh 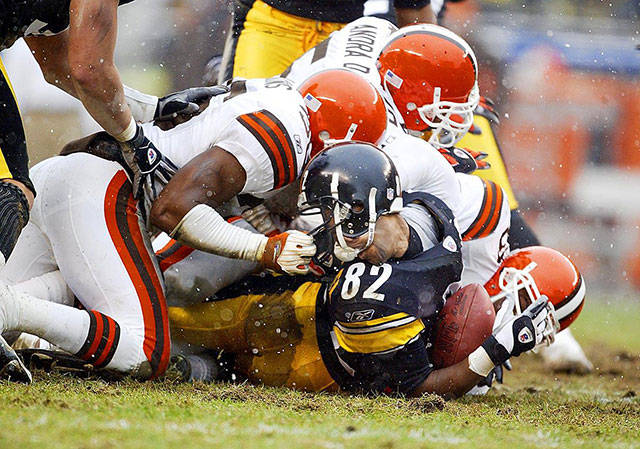 London Olympics, Aug. 7, 2012 | Defending Olympic weightlifting champion Matthias Steiner of Germany lost his balance while trying to lift about 432 pounds and was hit in the neck by the barbell. He got up on his feet and waved to the crowd but later withdrew from the competition. 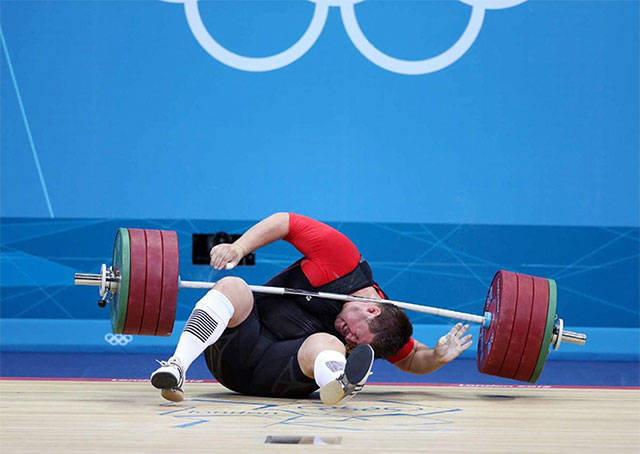 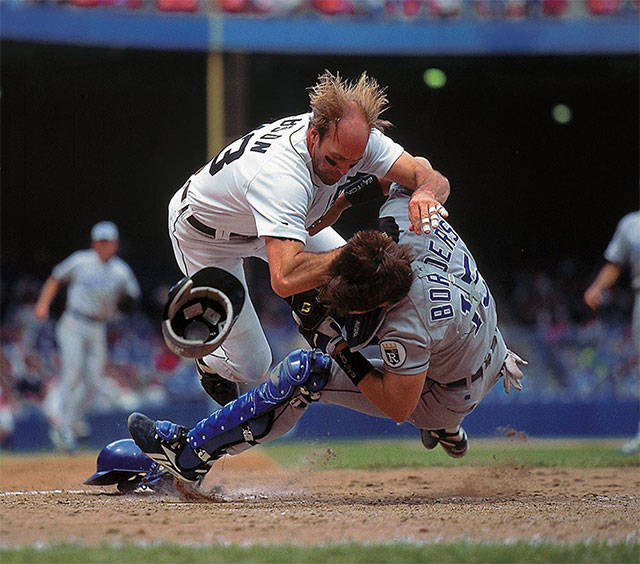 Belmont High at Colonel White High, Sept. 24, 2005 | Three-foot, 112-pound Bobby Martin played on punt and kickoff coverage and was the backup varsity noseguard for Dayton’s Colonel White High. Born without legs, he can’t wear prosthetics because he has no thighs to affix them to. 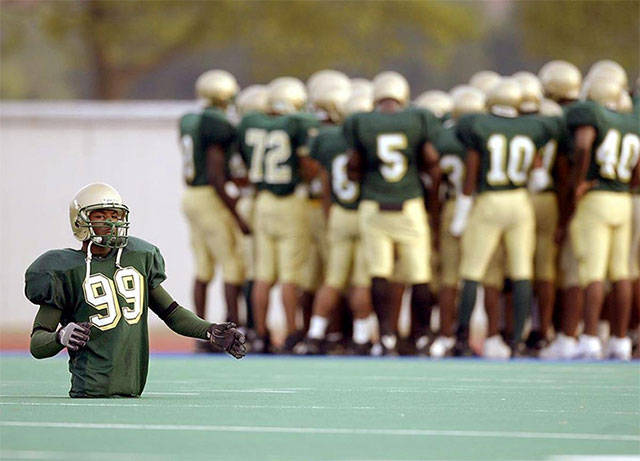